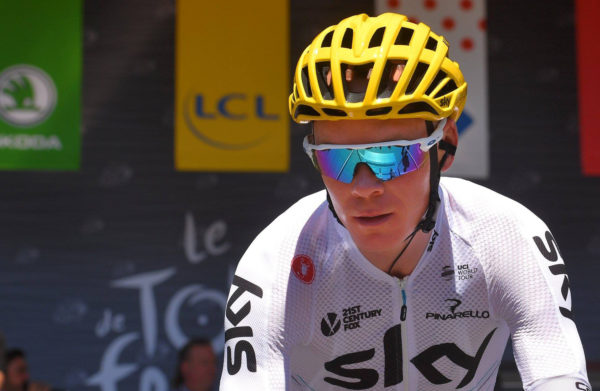 The Kask Valegro is the new lightest weight, most ventilated road helmet the Italian company has to offer riders racing through hot summers and up the most grueling mountains. And they had to make up a lot of them in yellow for Team Sky’s July of racing in France. Besides Chris Froome winning the overall at the Tour de France, his Team Sky spent every day after the first stage time trial leading the overall team classification, so they had 19 days of racing with yellow versions of the new helmet. While several riders of Team Sky opted for the more aero Protone for the flatter stages, pretty much everyone opted for the well vented Valegro when the days got hot and the climbs long… Kask previewed the new Valegro at the Tour de France on the heads of Team Sky, even though it isn’t slated for official launch until later this year ahead of 2018 real world availability. The key feature of the Valegro is the much improved ventilation over any of their other helmets. With 36 vents in total the Valegro presents a very open grille-like look from the front, moving as much air across the front and top of the head as possible to maximize cooling. It’s a very different approach to the fewer, but larger forward facing vents found on most of Kask’s road helmets, but Kask also says it results in trimmed down weight as well. The Valegro was actually developed in partnership with Team Sky which is why they got an early run of the new helmets. Its design is a direct response to Sky feedback for a hot weather helmet. With the more open grid structure around all of those vents, the Valegro is said to dramatically reduce the real contact area between the rider’s head and helmet pads – by up to 70% over some more conventional designs. That works together with a new 5mm thick breathable & fast wicking pad material that makes the helmet even more comfortable in hot weather. Part of the design optimized for pro riders is the vent design which incorporates locations on both the front & rear of the helmet to easily stow the arms of your favorite sunglasses.

Kask even claims that it performs well in the wind tunnel, adapting aero tech from their Infinity & Bambino Pro helmets to both maximize cooling efficiency and result in low drag as well. Claimed weight for the open structure Valegro is just 180g, making it one of the lightest road helmets available, taking advantage of some new reinforcement tech and a new in-molding method that we might learn more about when the helmet is official unveiled.