In 2018, Aqua Blue will become the first modern pro team to race a 1x drivetrain in the pro peloton. They’ll be aboard the new 3T Strada, which debuted this spring as a purpose built aero road bike with absolutely no accommodation for a front derailleur. The team has partnered with SRAM and will be racing their Force 1 road group, with the chainring paired to 3T sister brand THM’s ultralight carbon cranks.

Remaining spec will be announced before they kick off the full season next year, but we suspect it’ll remain heavy on the 3T cockpit and wheel components shown here. Having SRAM on board as an official supplier means they won’t be racing 3T’s own wide-range 12-speed cassette… Instead, they’re spec’ing the largest SRAM WiFLi road cassette, clocking in at 11-36 with 11-speeds. According to SRAM’s 1x conversion guide, when paired with a 48-tooth chainring, it has 92% of the range of a 52/36 double paired with an 11-28 cassette. So, for most instances, they’ll have what they need, albeit with a bigger jump between some of the larger cogs. And they’ll likely swap in smaller cassettes or different chainring sizes based on each race’s (or stage’s) terrain. The Force 1 and Rival 1 road groups were introduced more than two years ago and were quickly adopted by cyclocross, then gravel. This could be the PR move that pushes them in the realm of consideration for pure roadies. And it’s easy enough to experiment with, just sub in a wider range cassette and get a 1x chainring for the front. We’re also thinking this is teeing up 12-speed for road, something 3T is ready for with their new cassettes based on the SRAM XD-R driver body, but we’ll need shifters. Quotes from the press release:

“With 3T launching the world’s first dedicated 1x road frame and Aqua Blue Sport choosing it as their team bike for 2018, we knew we wanted to be involved in this project. It fits with our product innovations, and both 3T and Aqua Blue Sport will be perfect partners to test our 1x drivetrain options to the extreme,” explains Jason Phillips, SRAM’s Sponsorship Director. “In only its first year at the top level, Aqua Blue Sport has already made a name for itself and SRAM is enthusiastic to be a part of their progress in 2018 and beyond.”

Rene Wiertz, CEO of 3T believes that the relationship with SRAM will see Aqua Blue Sport continue to achieve success in 2018: “SRAM has been our drivetrain of choice since we launched the STRADA earlier this year, and we are super excited to work with them in supplying bikes to Aqua Blue Sport. With all the developments in the works at 3T and SRAM, we’re sure we’ll be able to give the team a real advantage and fans something to look forward to for the coming years.”

Stephen Moore, Aqua Blue Sport’s General Manager said his team are delighted to get the chance to ride the 1x system on the roads during the 2018 season: “SRAM is the gold-standard in drivetrains, in particular for 1x. It is great they have recognised what Aqua Blue Sport has accomplished in its first year and we are honoured they have chosen us as a team they will support in 2018. It’s not often that a young team like ours obtains a drivetrain partnership like this.” 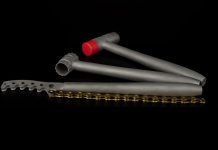