Yesterday pro racing really kicked off for 2019 in Adelaide, Australia with the Down Under Classic, a warmup criterium for the Tour Down Under. But Peter Sagan wasn’t racing on his typical S-Works Venge super bike, instead swapping in the actually affordable Specialized Allez Sprint Disc aluminum aero road bike. So why did Sagan and several of his BORA-hansgrohe teammates race the alloy bike instead?

While the latest S-Works Venge claims to be one of the most aero road bikes ever made, race-proven over numerous victories, lighter than ever before & comfortable, the aluminum Allez Sprint is apparently even stiffer. For all-day racing over varied road surfaces the Venge is undoubtably going to be faster…

Well, the Allez Sprint Disc frameset sells for $1500, and the latest S-Works Venge Disc frameset retails for $5500. Currently, a Sagan Edition of the alloy bike is only offered with rim brakes, but him racing this bike might soon change that.

There is one complete Allez Sprint Disc being sold in the US with a 105 group, plus a few framesets you can build up as you choose. Debuted just this past summer with its addition of disc brakes, the Allez Sprint Disc uses some unique tech to create a bike that turns out to be pro race-ready. Besides thru-axles and flat mount disc brakes which promise a stiffer overall package and improved braking, the bike uses Specialized’s top-tier hydroformed E5 aluminum & unique construction. More than a material spec, the alloy bike features a D’Alusio Smartweld process that relies on forging the headtube, and even more so the bottom bracket, with additional shaping to meet up smoothly with the aero frame tubes. This moves the welds (and their heating impact) away from the typical joint location to increase overall frame stiffness.

The more budget bike also uses the same top-tier FACT carbon fork from the Tarmac SL6 and the aero FACT carbon seatpost from the Venge. Even though some of the team were racing their carbon super bikes, at least a few other of Sagan’s lieutenants were also riding the alloy Allez Sprint to set the Slovak champ up for the final sprint. (He ended second for anyone wondering.)

There had been rumor of racing a tubeless version of the deep carbon tubeless Roval wheels, but in the end (according to the race photos) it looks like everyone including Sagan stuck to the CLX 64 tubulars wrapped with Specialized’s Turbo cotton tubular tires. Besides his obvious name on the toptube, we noticed that this bike Specialized sent us photos of belongs to Australian Jay McCarthy and not Sagan. It has a S-Works Power Arc saddle (vs. Sagan’s fav, the narrower Romin) and a standard PRO alloy stem (vs. Sagan’s more robust carbon setup).

Don’t worry though, the 3x World Champ & current Slovak champion (and his luxurious new mustache) hasn’t hung up his Venge for the season. Specialized painted up a special edition of the brand new carbon super bike for him to race this year, starting with this week’s Tour Down Under. 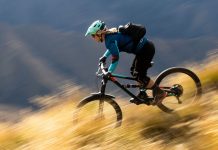 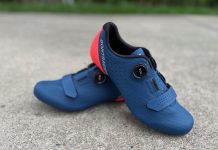 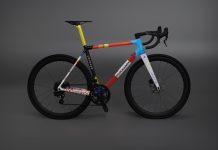 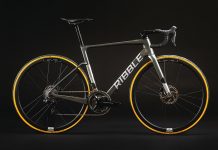