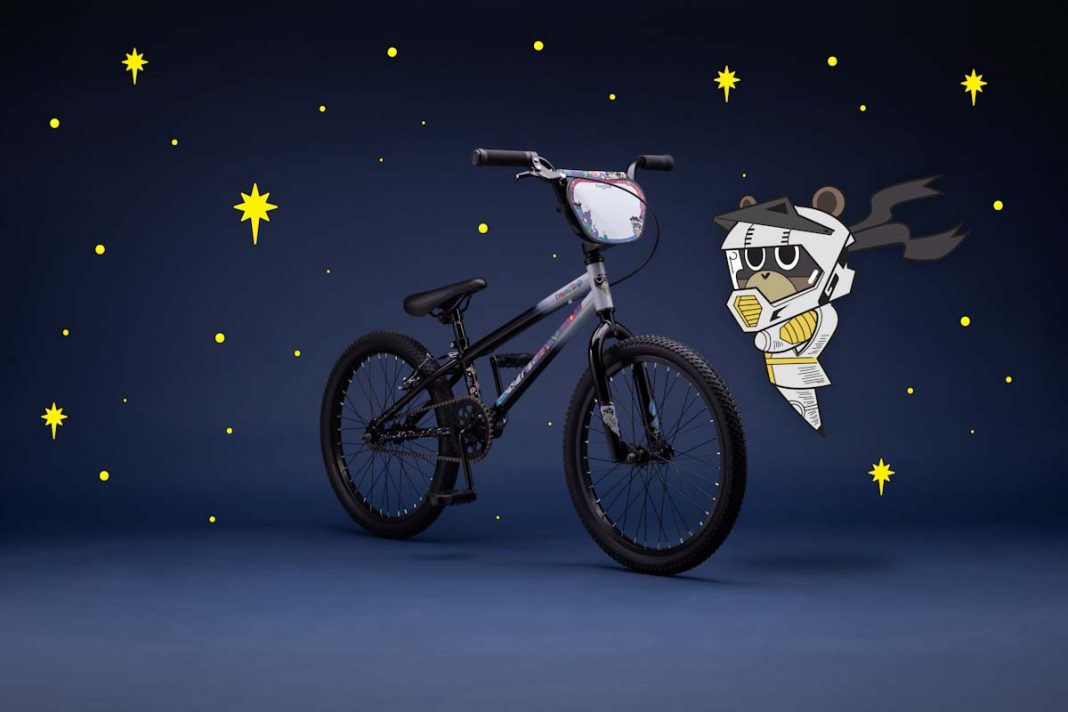 All aboard the Friend Ship, it’s time for an adventure! Some creative minds at GT Bicycles decided to not only build an affordable BMX for young riders, but to create a universe of characters and a storyline to go with it. The Friend Ship BMX aims to spark youths’ imagination and inspire them to ride with a fun, fictitious purpose.

The Friend Ship comes in one build spec, but upcoming shredders can choose between three colorways, each of which feature one of GT’s Space Ninja characters. As GT says, the Friend Ship “is not just a bike – it’s an adventure buddy”.

The Friend Ship BMX rolls on 20” wheels. Frames and forks are made of Hi-Tensile steel, and the frames come in one size designed to fit youth from 4’3” to 5’5”. The fork uses a 1” threaded steerer tube, and an alloy quill stem holds the bars. The two-piece Hi-Ten steel handlebars offer a 7” rise, and come with a crossbar pad. 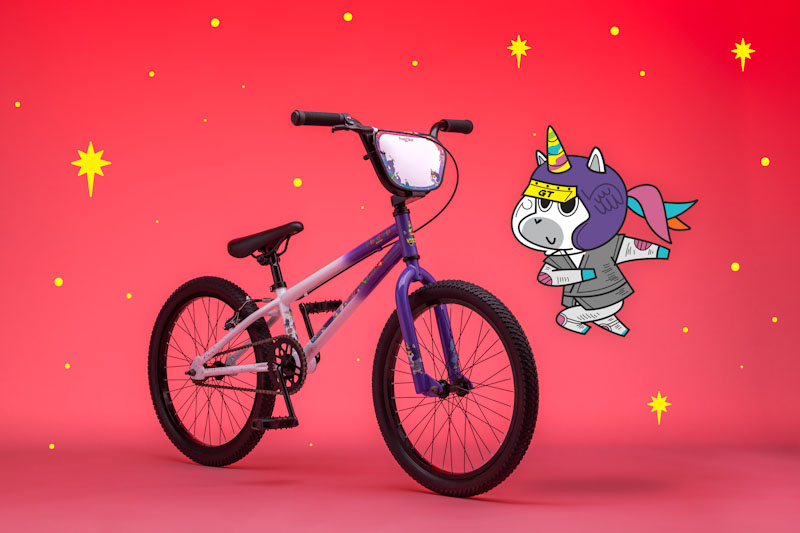 The Friend Ship has a pretty basic build, which keeps its price to a very affordable level (the whole bike costs little more than a pair of MTB tires!) Its single wall alloy rims feature GT 20×1.95” tires. The wheels spin on loose ball hubs with 3/8 axles front and rear. 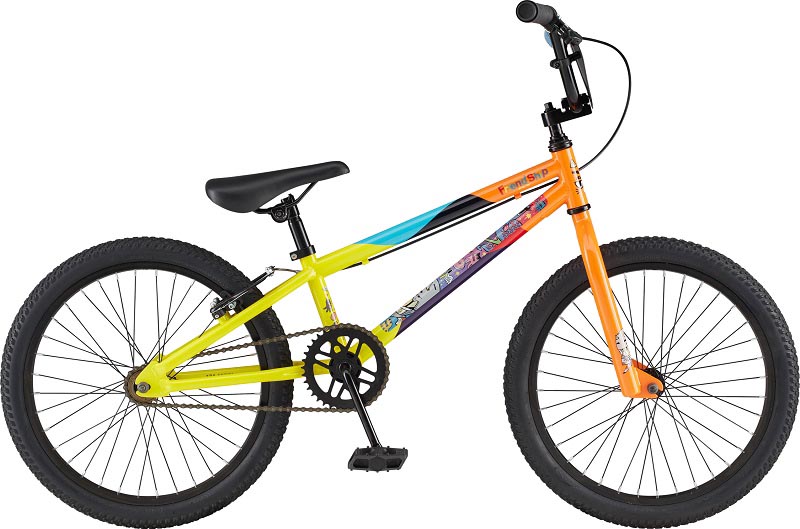 The one piece crank also runs a loose ball American bottom bracket, and GT includes a set of plastic platform pedals. The front chainring is 36t. As for stopping, a kid-friendly reach adjustable alloy brake lever controls the rear V-brake. 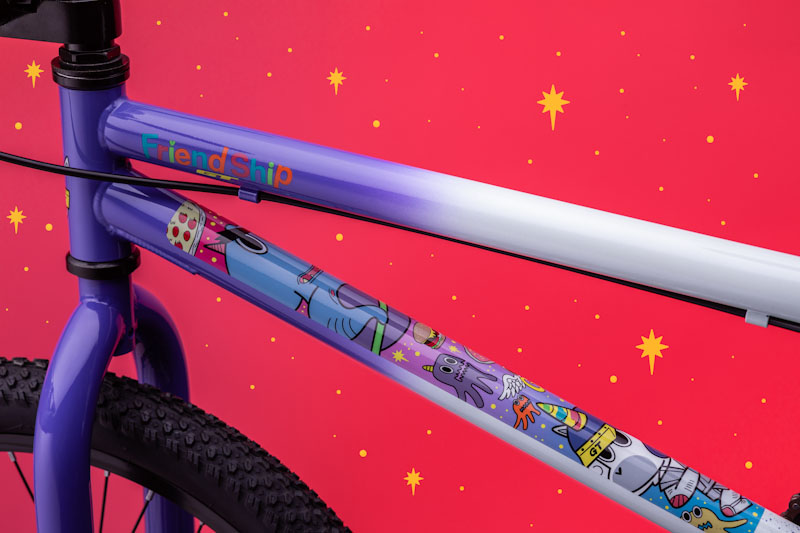 Now here’s where GT went to the next level to make this bike not just a bike, but part of an imaginary universe! The clever company dreamt up the Space Ninjas – Becker the Bear, Unica the Unicorn and Carter the Cat. They have a navigator named Wings, but they still need the help of a young rider/pilot!

With young legs ‘piloting’ them around, the Space Ninjas can embark on their quest to find the golden feather. Bringing the feather to Zel the Zebra prevents King Ocki the octopus and his underlings from taking over the Junk Food Universe! 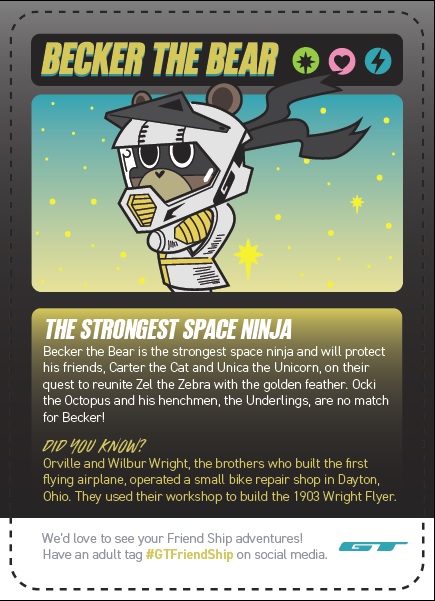 Each bike comes with a Collector Kit that includes stickers and a playing card for the character featured on the bike. The playing cards explain the characters’ stories and roles, and even include random educational facts. Lastly, youth can have an adult post their adventures to social media with the hashtag #GTFriendShip, and can see what other Space Ninjas have posted. 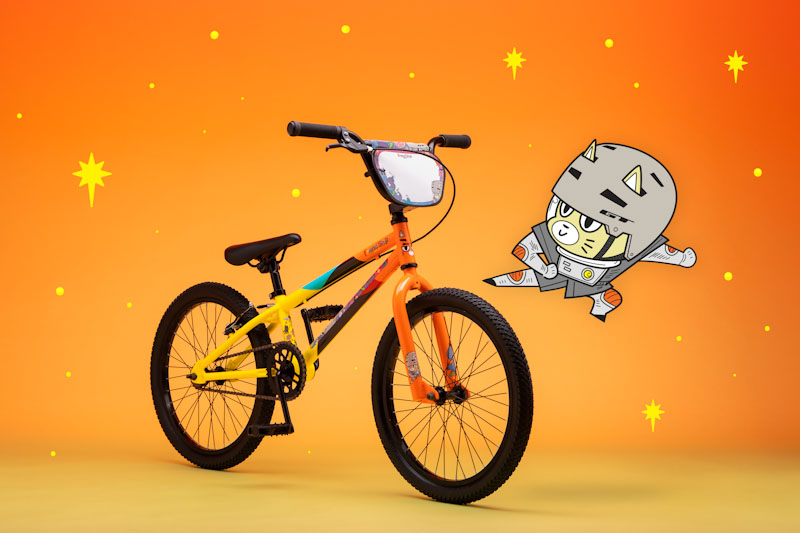 There are three colors/graphics to choose from, and each colorway comes with a different character on it allowing kids to pick their favourite. The Gloss Black – Battleship Grey fade features Becker the Bear, the Gloss White – Purple Fade bike shows Unica the Unicorn, and the Gloss Yellow – Orange Fade model is for Carter the Cat.

In addition to the fun graphics, the Friend Ships also come with a dry-erase number plate. Your young ripper can ‘race’ as whatever number they like, show off their art skills, and change it up whenever they want!

The Friend Ship BMX sells for a reasonable $215. It is available now at GT dealers.