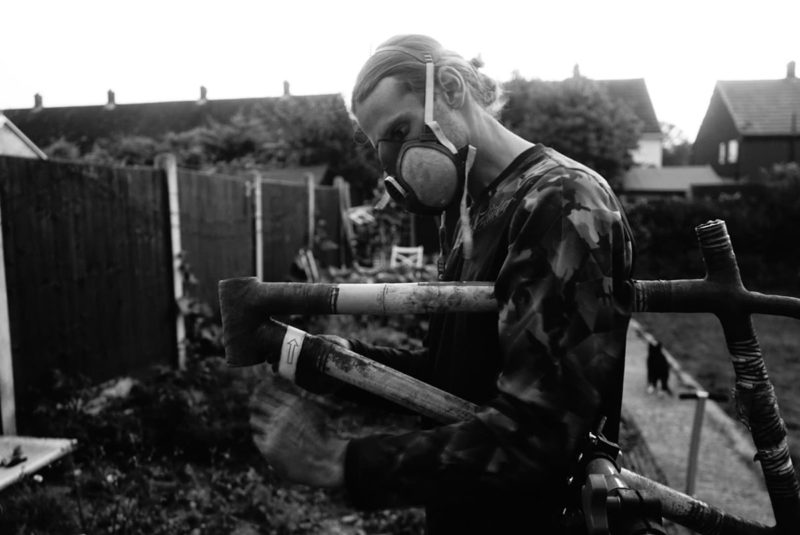 Who are Earthbound Bikes? Put simply; one man building road, gravel and mountain bike frames from bamboo. Jason O’Nions is an outdoor educator, wildlife conservationist and teacher who has, in his own words, been bitten by the buy of building bamboo bikes. Jason built his first bamboo road frame 11 years ago, and has been building proof-of-concept frames ever since. The most notable frame would be the recent creation of a high-pivot full suspension bamboo mountain bike. 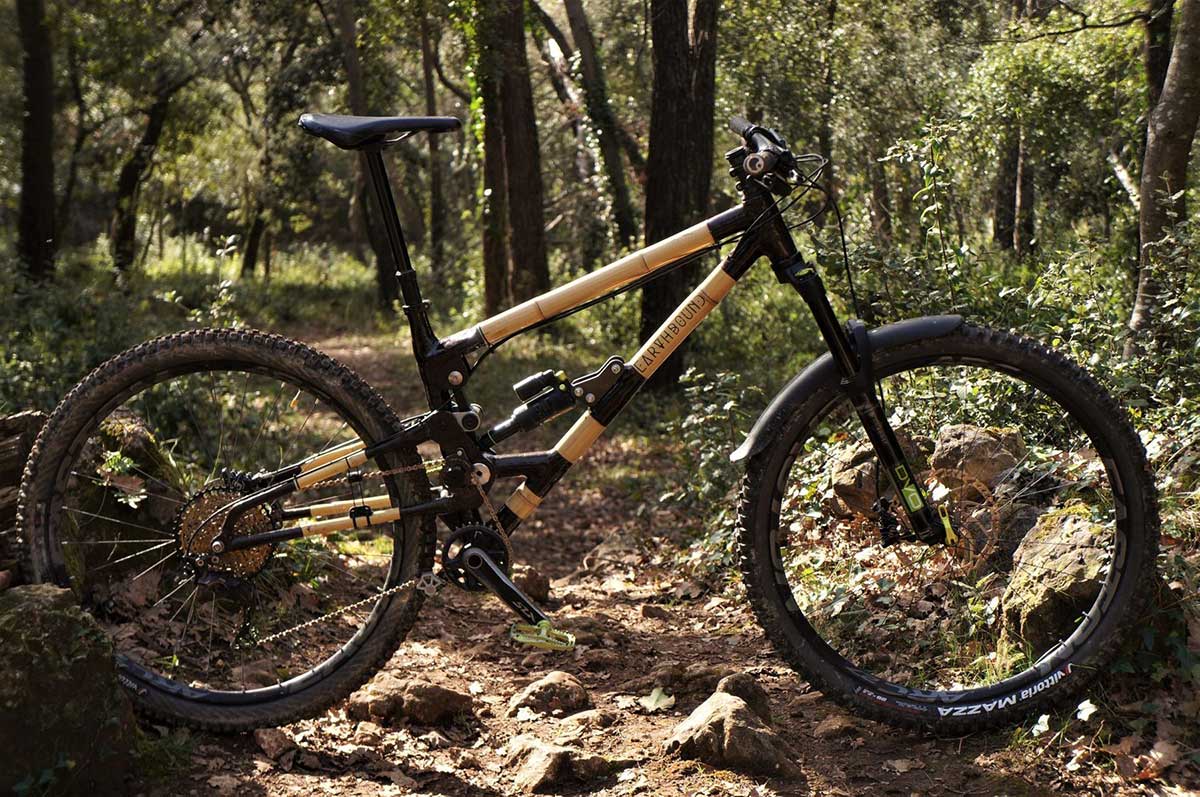 Earthbound Bikes have no website. There is no real brand to speak of, even. But, that doesn’t mean that you can’t go right ahead and order your very own custom geometry bamboo frame right now. We had so many questions for this guy, so let’s dive right in to find out how and more importantly why Jason is building bikes with bamboo, and what his ambitions are for Earthbound Bikes.

Bikerumor: The question of everyone’s lips; why Bamboo? Where did the idea come from?

Jason O’Nions: I can’t take any credit for the idea. Bamboo bikes were actually being made in the 1890s! But, I made my first one purely out of curiosity. I loved the idea of building a bike using a natural material. 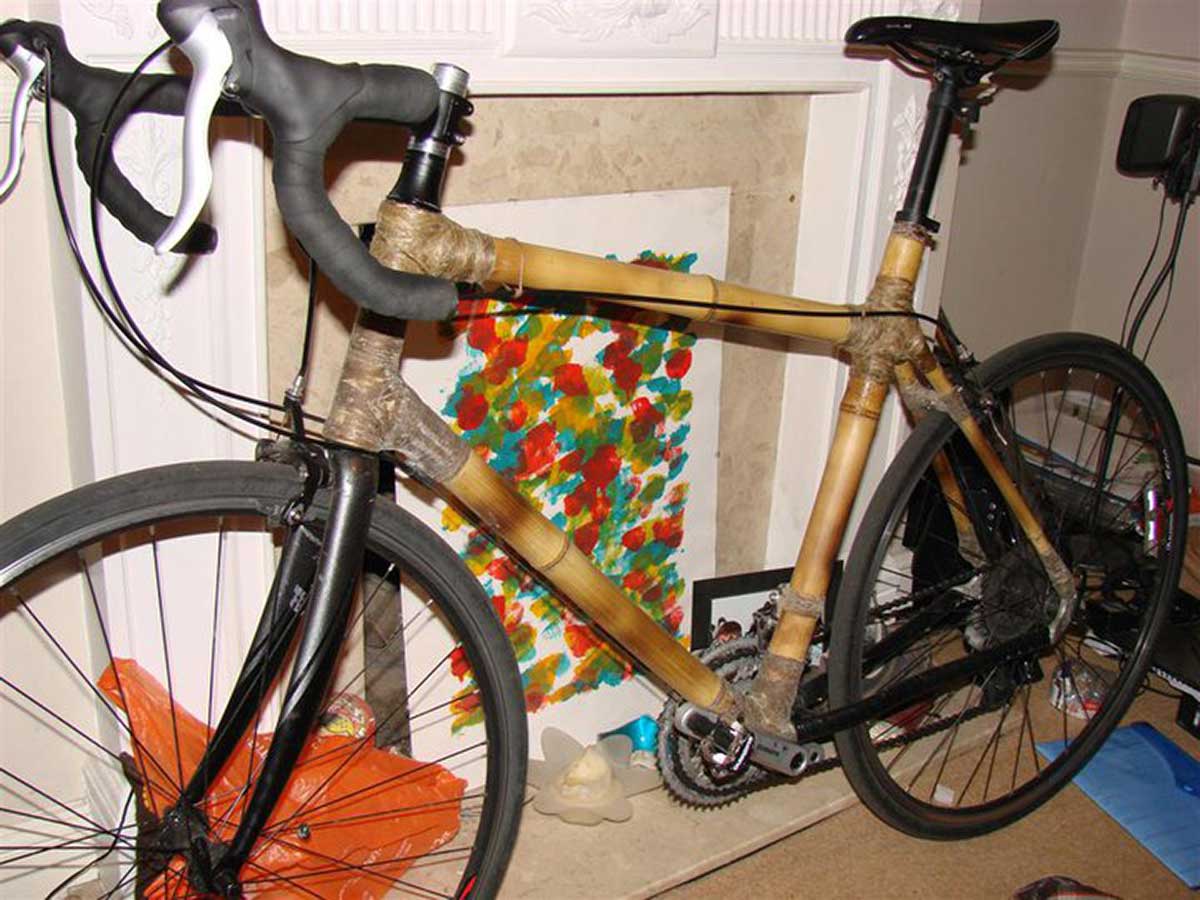 Jason’s first shot at building at bamboo road bike 11 years ago. He sent us this picture with the caption “Kill it with fire”

The first one I ever made was honestly an abomination and it had a lot of lateral flex under hard pedaling. But, the vibration and impact damping had me hooked from the first ride. Over the years I’ve dipped in and out of making them and improved each time. I’ve now reached a point where I wouldn’t consider riding anything else. 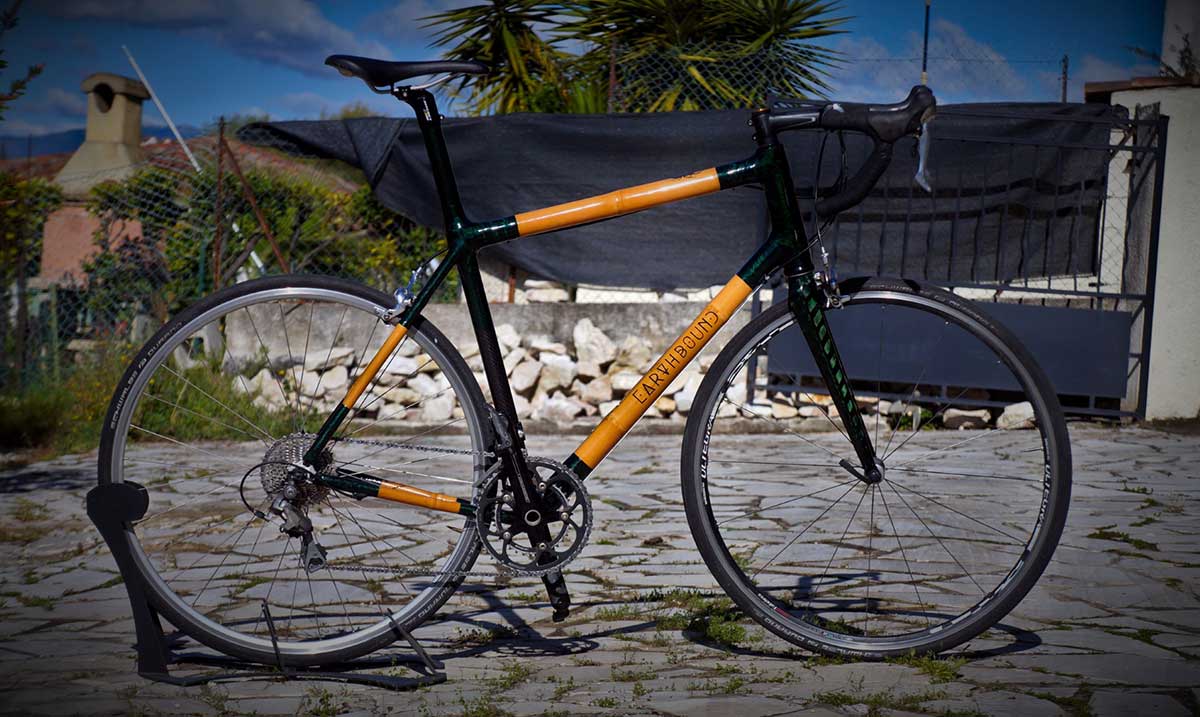 The extra compliance keeps me fresher for longer and allows me to charge harder in the rough stuff. Also, its ability to flex and deflect impacts gives an undeniable improvement in cornering grip too. All of this is of course backed up by my super scientific strava results of course! 🙂 I’m simply faster on a bamboo bike.

Bikerumor: What is the source of your Bamboo? And, how do you prep, inspect and trust the natural irregularities of a natural material?

Jason O’Nions: The Bamboo I use is construction grade and sourced from a wholesaler in Spain, but it originates from China. Bamboo has spent 400 million years being refined by nature and as a natural composite it is ‘designed’ to be flexible yet at the same time very strong in order to withstand swaying in the wind. In addition, a plethora of studies exploring its mechanical properties has shown it to be more than adequate for use in bicycle frames. 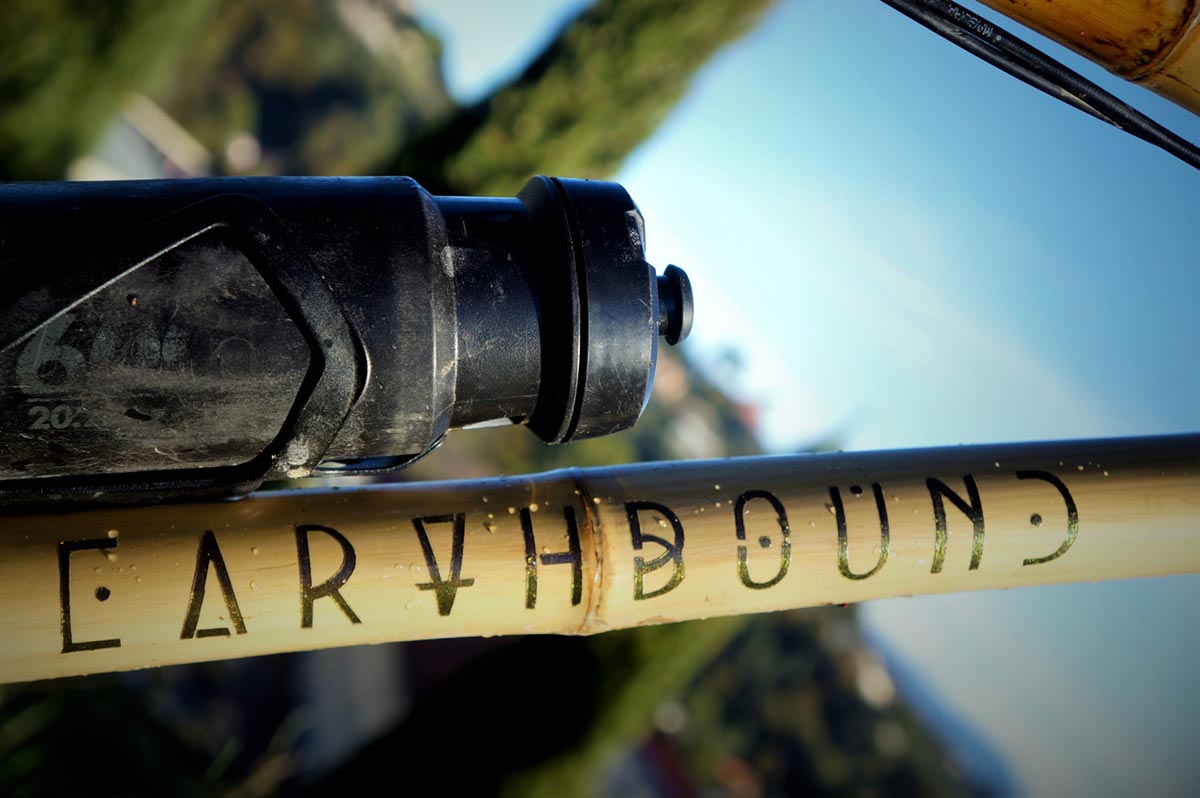 I do very little to prep tubes, aside from inspecting for splits, damage from transport or blemishes. But I do consider wall thickness and tube density/weight, which varies greatly along the length of a bamboo culm.

Bikerumor: What frame material, carbon, aluminium or steel, does the bamboo frame most feel like in terms of ride feel?

Jason O’Nions: Bamboo is for sure its own thing, but its feel is most like a carbon bike which has been optimised for comfort but with some of the springiness of steel. 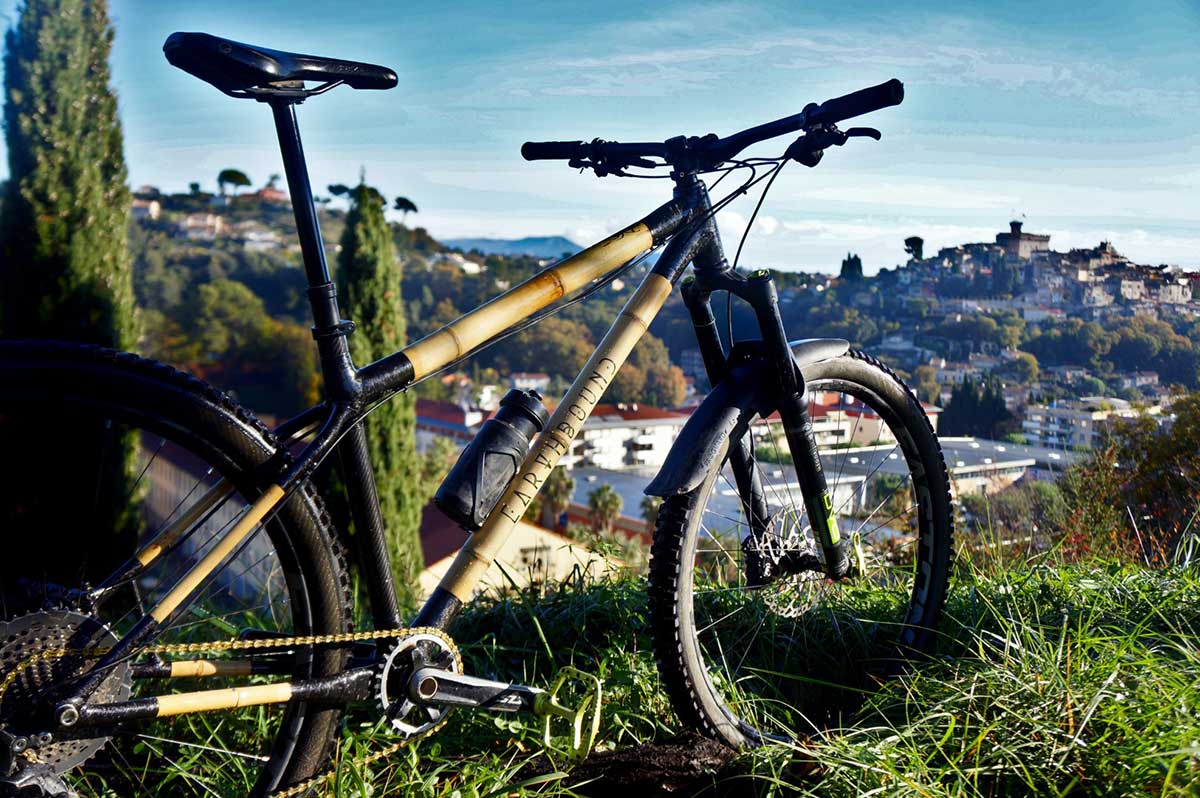 Jason has made road and gravel frames, as well as a hardtail and high pivot full suspension mountain bike, all with bamboo

Bikerumor: Have you ever thought of trying to work with bamboo grower to create curved tubing?

Jason Onions: It’s a cool idea. But I think it would produce inferior bamboo. Think about how plants grow if you give them extra support – weak and spindly.

Bikerumor: How does it damp vibrations as compared to steel or carbon. Is it stiff in some planes and more compliant in others? What is that compliance like? 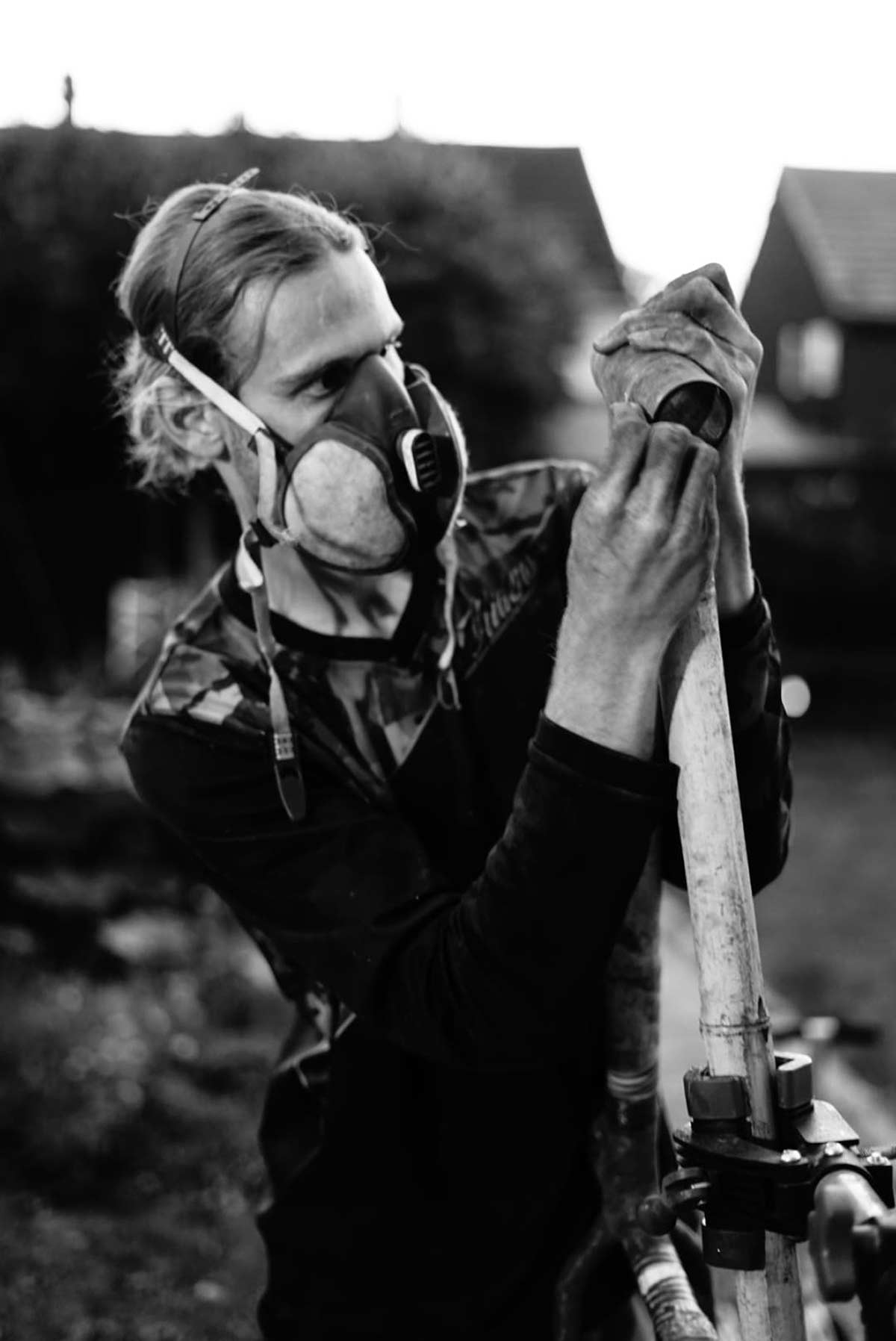 Its material density also varies throughout the tube. It is less dense on the insides and denser on the outside. This gives it the ability to absorb (damp) a wider range of frequencies compared to carbon and steel bikes. 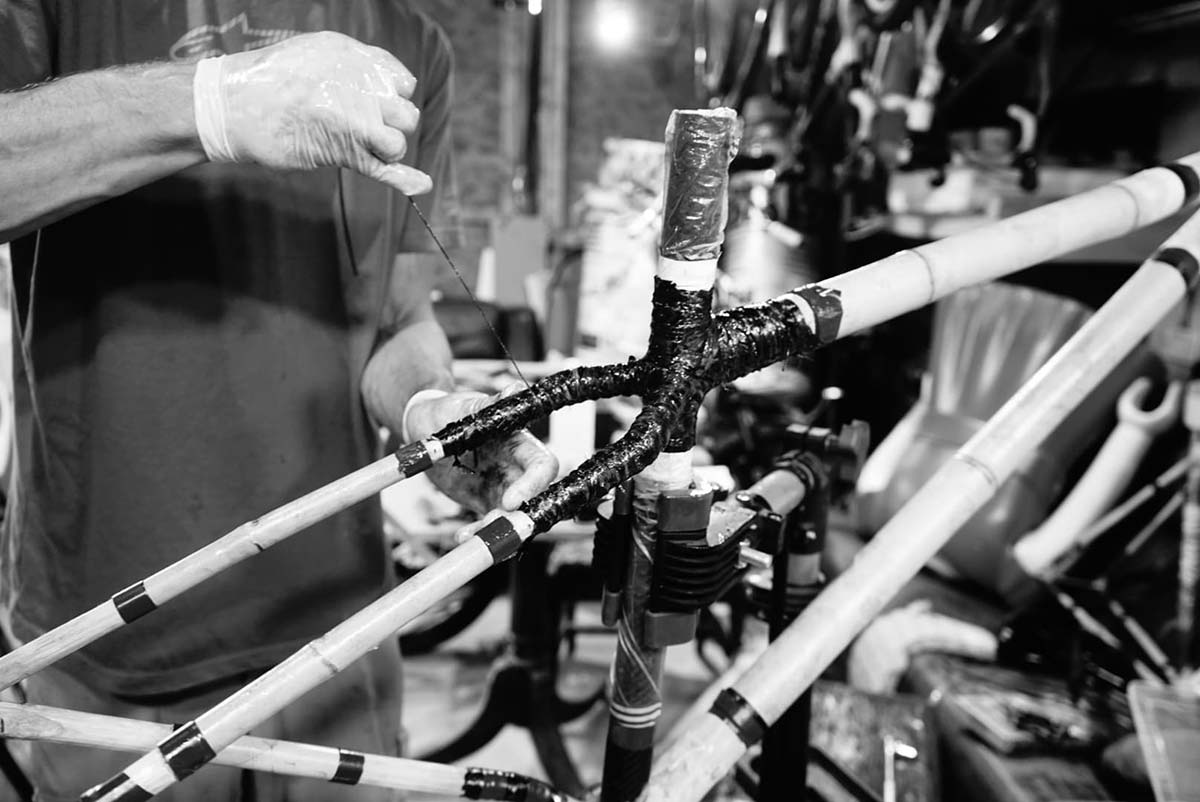 Bamboo is a natural composite. It gets its properties by virtue of two materials working together just like carbon fibre (carbon fibres embedded in resin vs cellulose fibres embedded in lignin. In bamboo’s case all of these fibres run in the same direction; parallel along the entire length of the tube. This gives it amazing properties in tension (think bending – swaying back and forth in strong winds) but because none of the fibres are orientated diagonally it can lack torsional (twisting) stiffness. Of course, bamboo doesn’t need to resist twisting in nature. 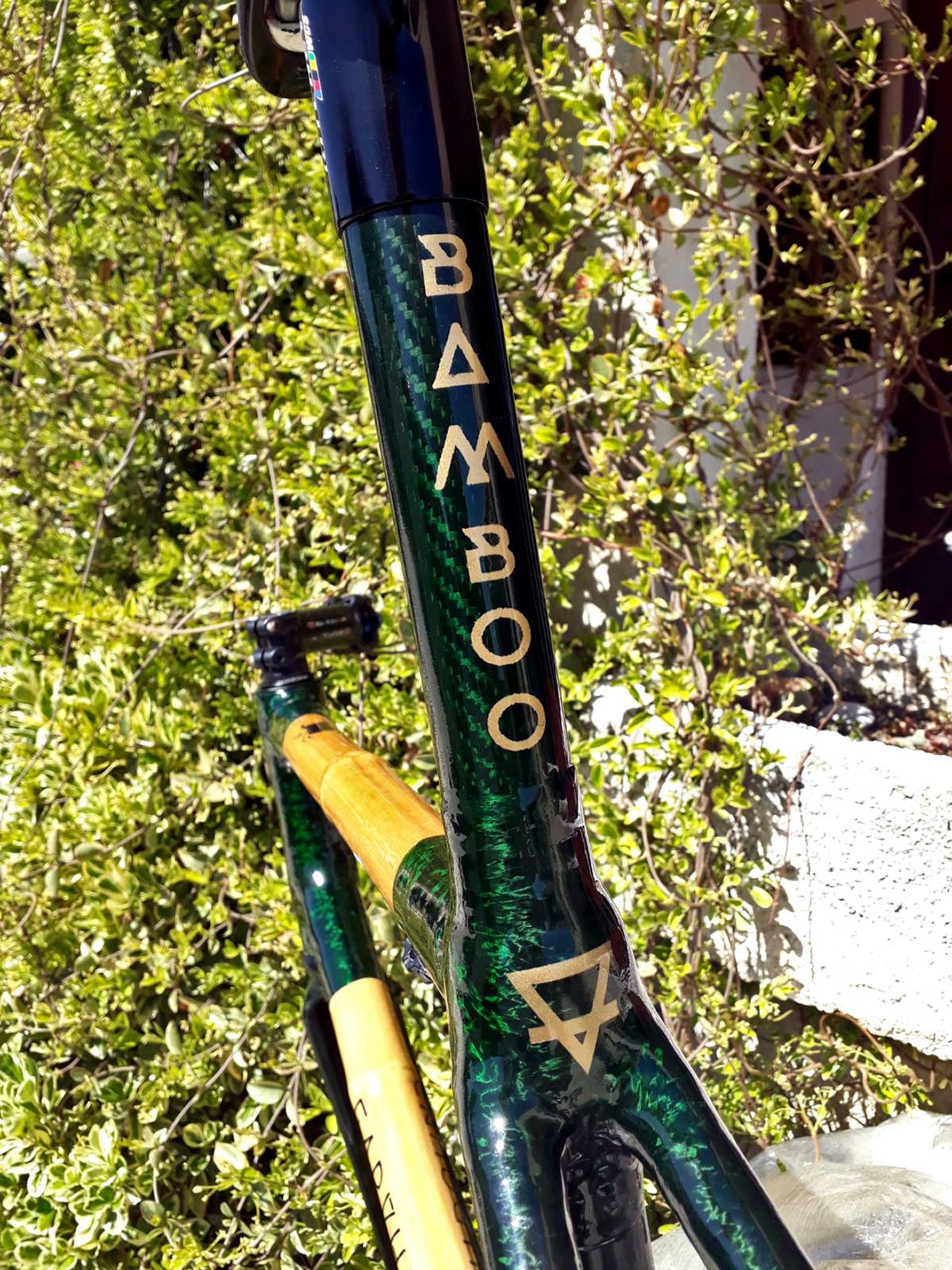 Torsional stiffness is important for bikes as it has a large effect on lateral stiffness and thus how a bike feels under pedaling loads. On this latest crop of bikes, I’ve addressed this by laminating the inside walls of the top and down tubes with a layer of carbon fibre orientated at +45/-45 degrees (diagonally so it spirals the length of the tube). This improves the lateral stiffness without robbing the bike of its inherent booness.

Bikerumor: How do you make everything fit together? Are those carbon lugs you are using? Do you use carbon fibre anywhere else?

Jason O’Nions: The bamboo is mitered by hand in the same way you’d build a steel or aluminium bike. They are then tacked together and given a neat fillet using marine grade epoxy resin.

A carbon lug is then created by hand by laying ‘wet’ carbon. Once cured, this then has to be sanded by hand to achieve an attractive finish. This part of the process is extremely labor intensive but it has to be done this way due to the uniqueness of each tube. I can’t ‘cheat’ and use molds. The head tube, bottom bracket shell, and seat tube are also carbon. 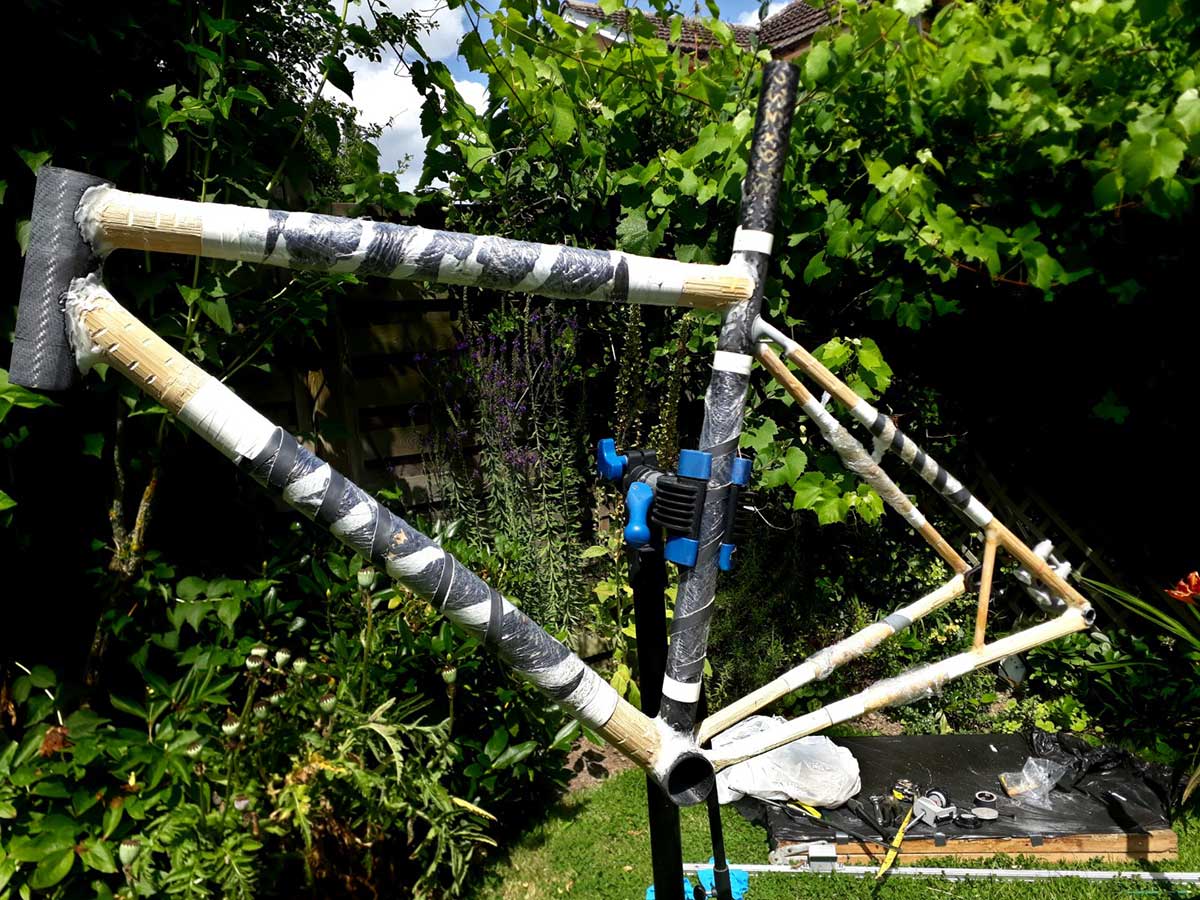 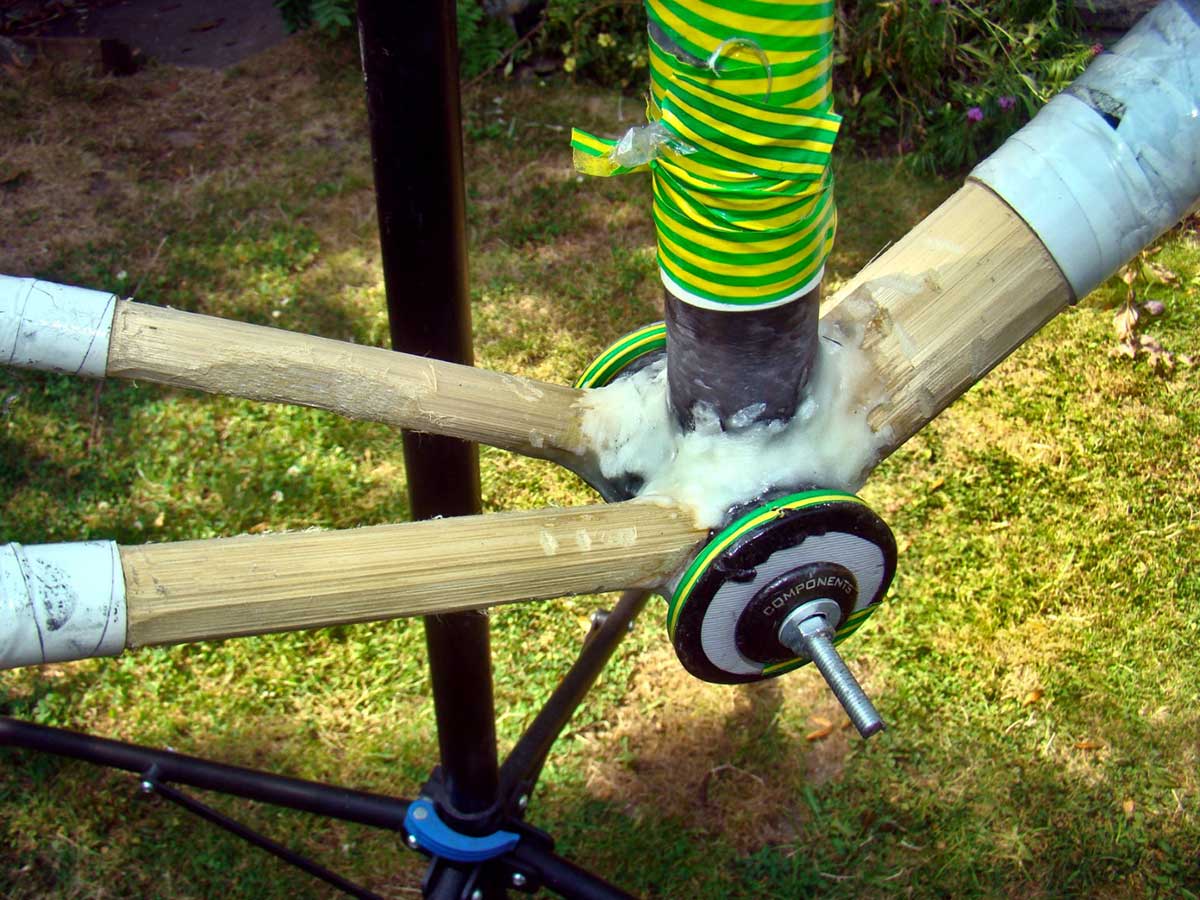 As Jason deals only with straight bamboo tubing, he needs to shave away some material from the inside of the chainstays for decent tire clearance 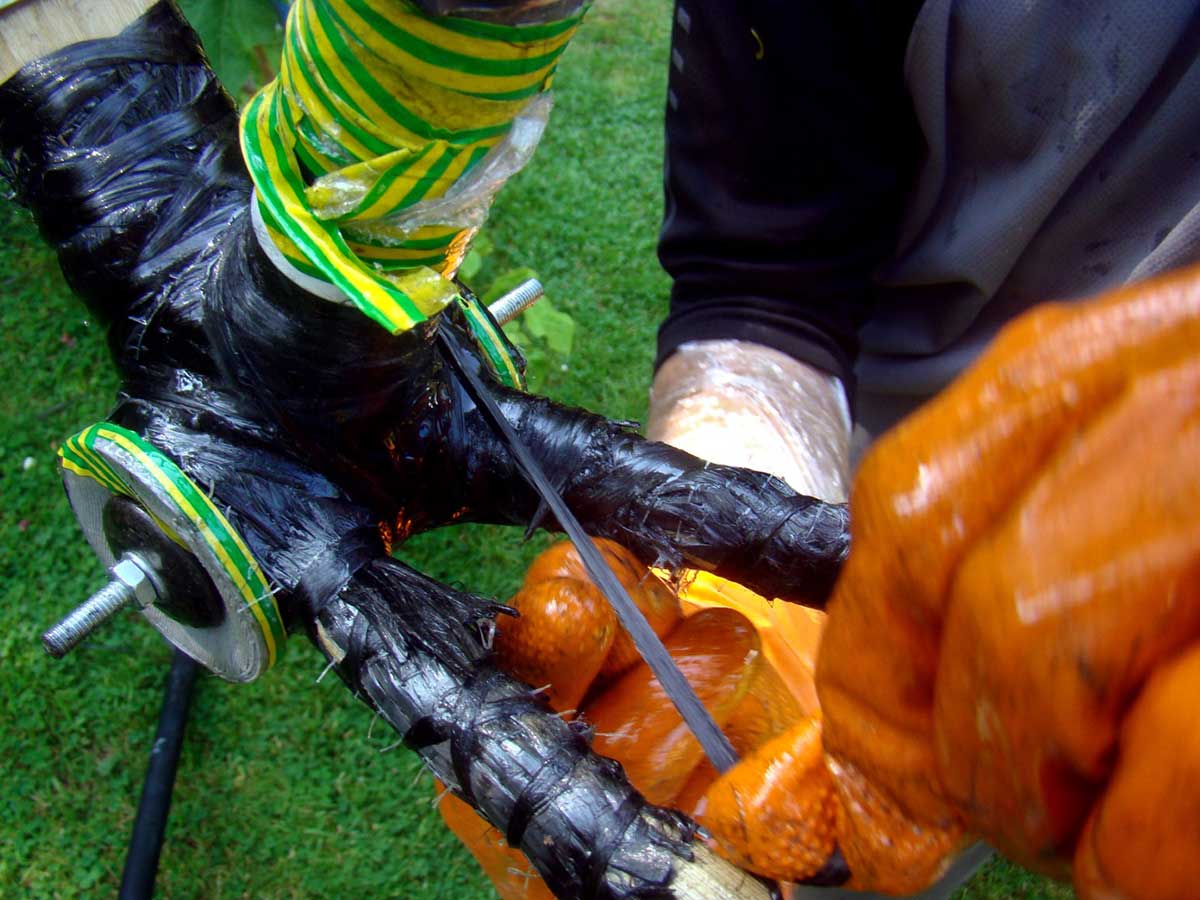 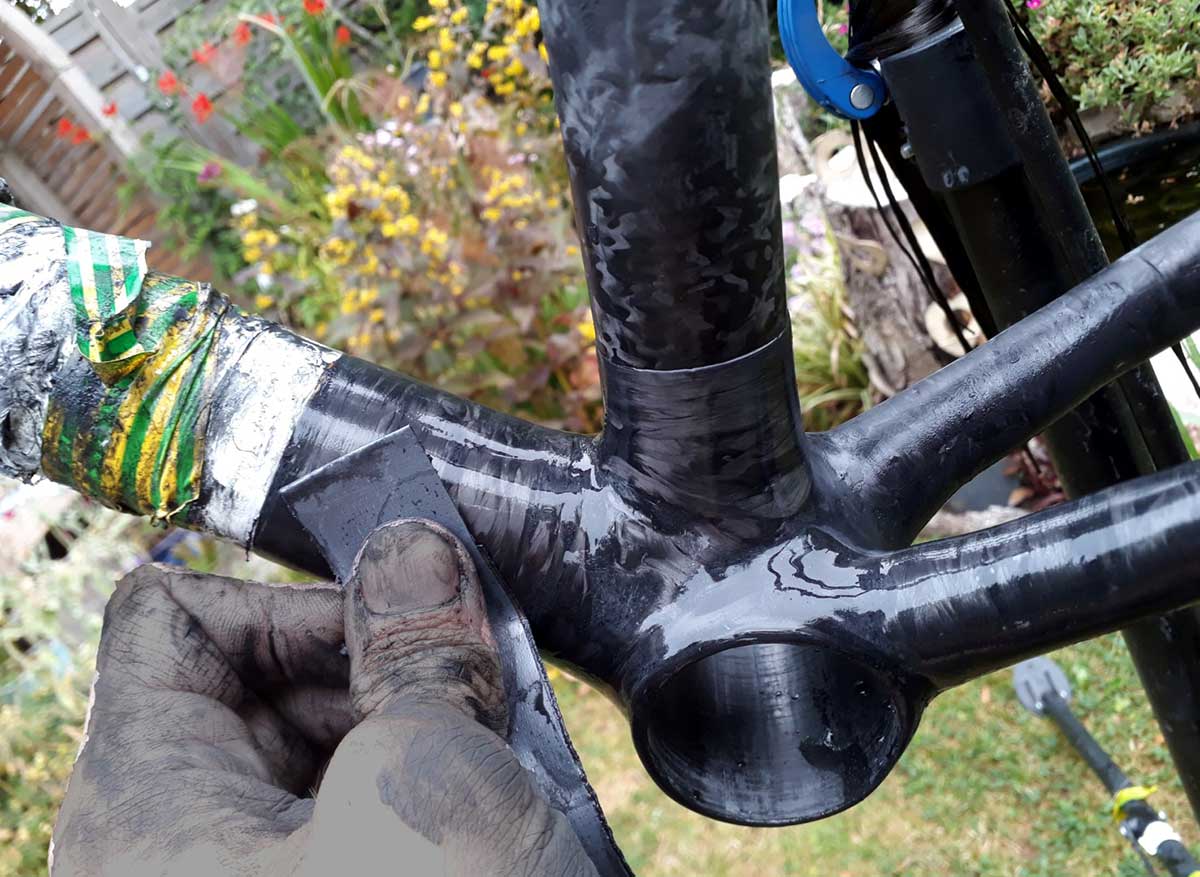 Wet sanding the downtube and bottom bracket shell area of Jason’s latest bamboo gravel bike; this is the most labor intensive part of the process 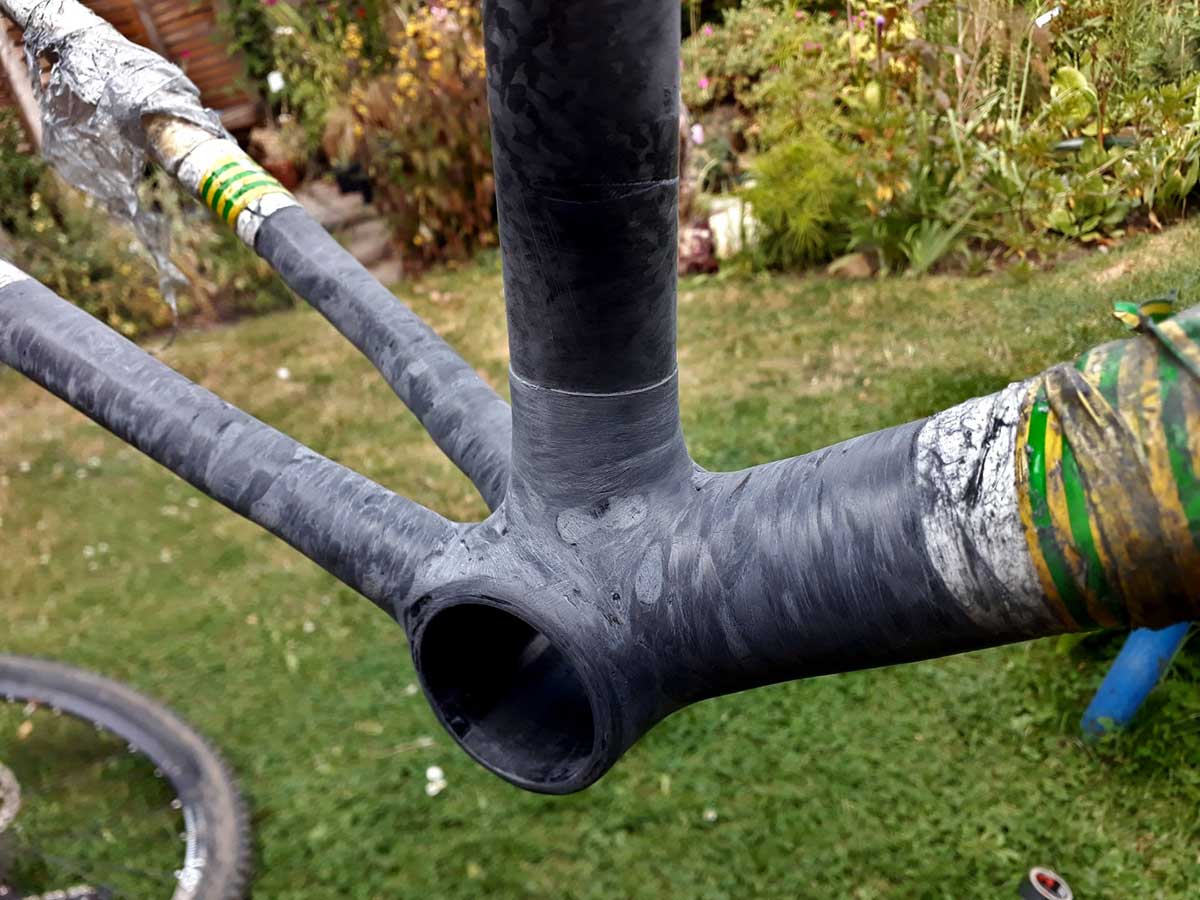 Once the carbon lugs have been sanded down, Jason uses a clear-coat to finish to frame, sometimes adds candy paint to add a splash of colour to the carbon 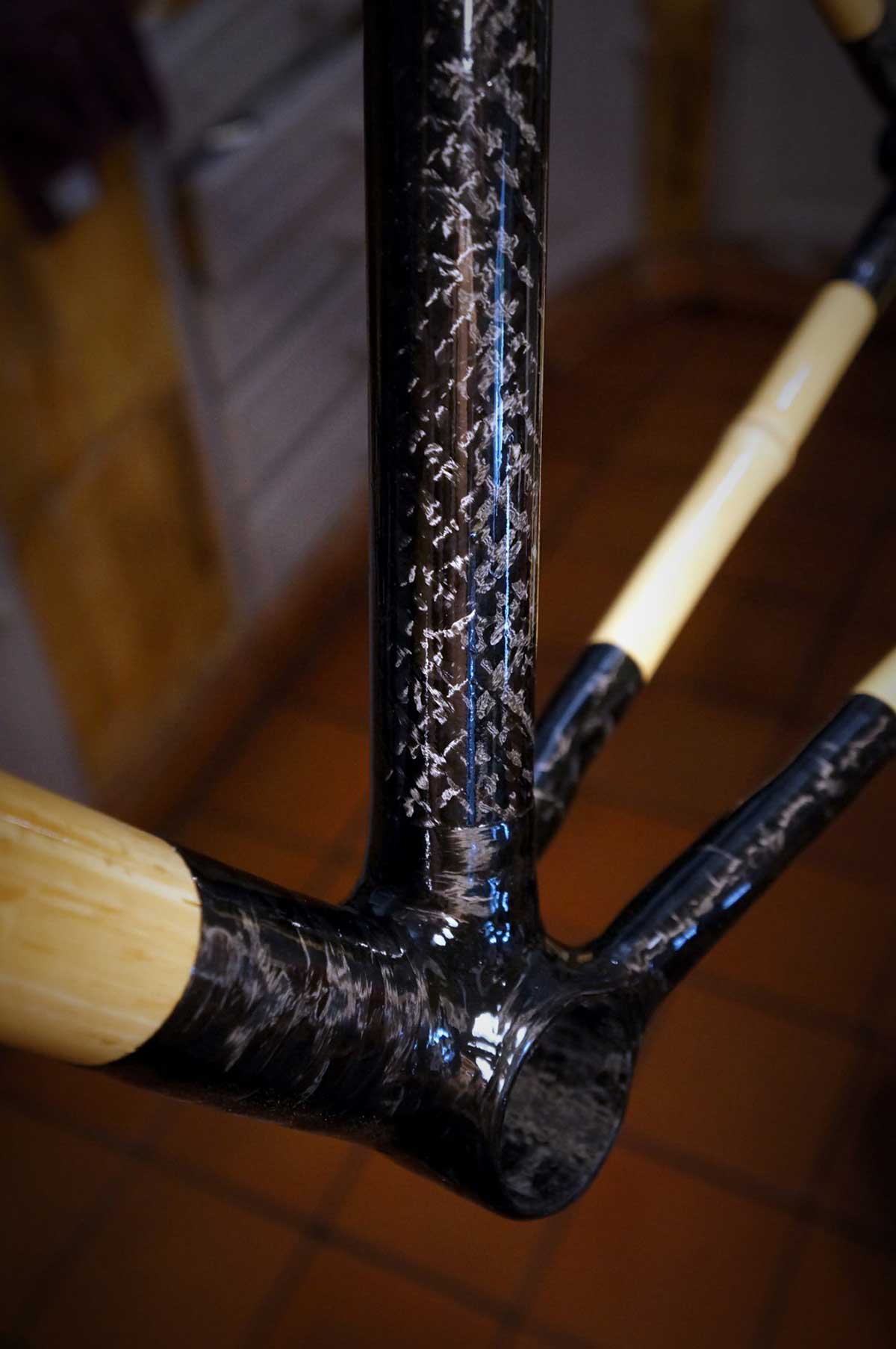 Bikerumor: On your high-pivot full suspension bamboo bike, how do you design the pivots differently? Do you simply press the bearings into the housings in the carbon lugs?

Jason O’Nions: The main pivot is a bottom bracket and the swing link is from my previous bike, so the bearings were largely taken care of. But, on the swingarm they press directly into the carbon plate. This was a challenge using a hobbyist CNC machine. I’m impressed it could work to those tolerances. 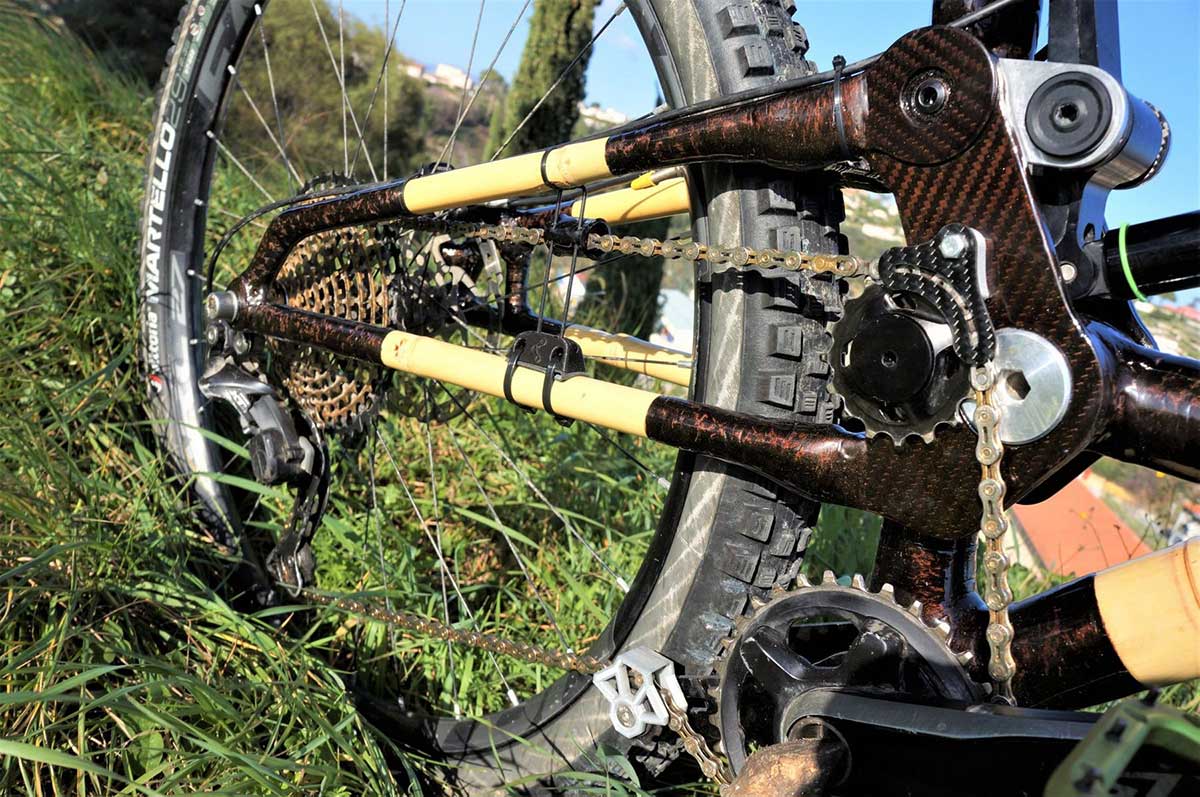 Bikerumor: Have you ever, or do you plan to, send any of your frames for strength and fatigue testing?

Jason O’Nions: Only if demand for my frames ever increased. The strength of the bamboo isn’t even in question. If there is a weak link then it would be in my carbon joints. I am confident through years of riding that these bikes are overbuilt. 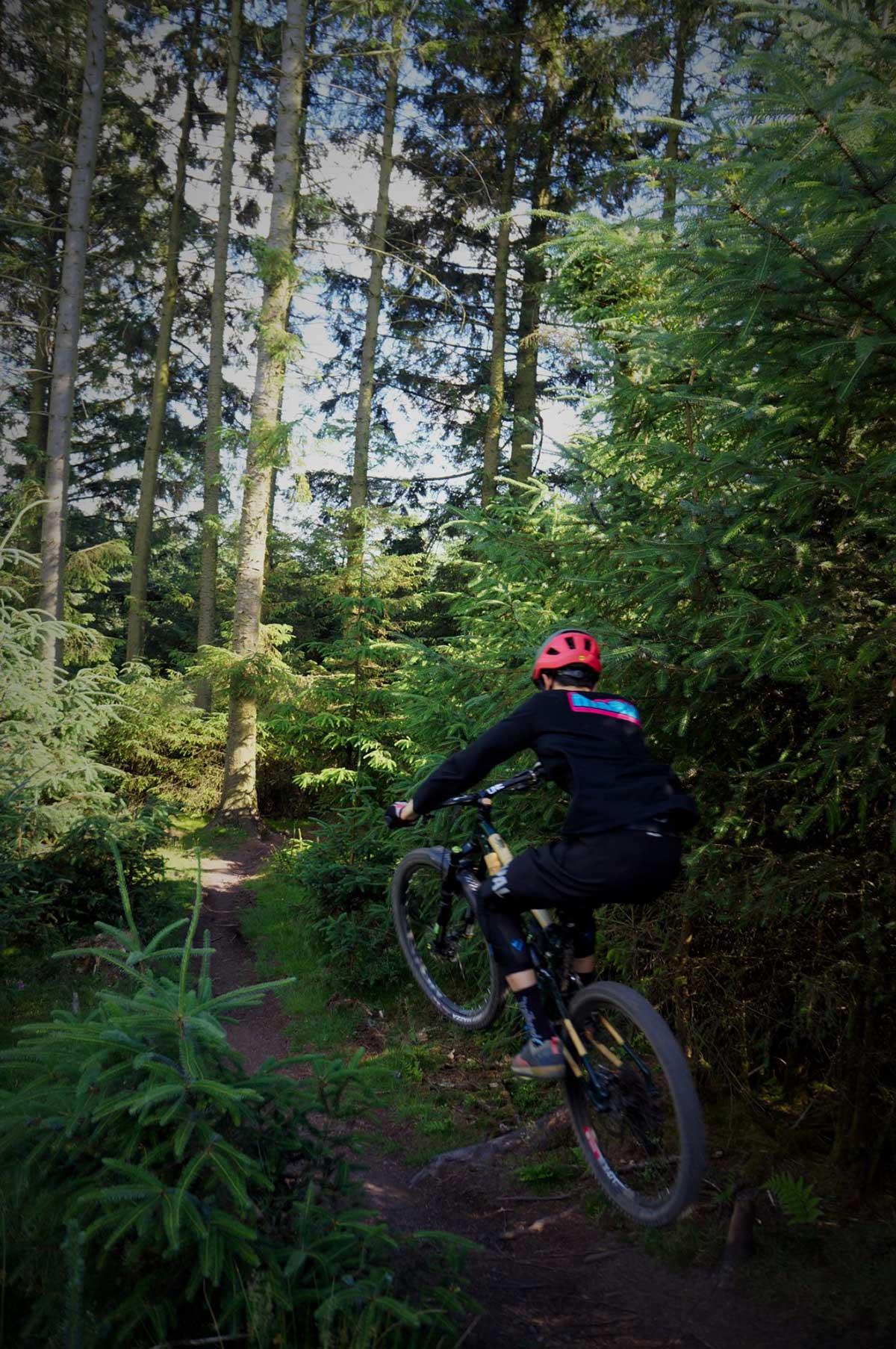 Bikerumor: Can you tell us more about your gravel frames? What’s the maximum tire clearance, and is there anything unusual about the design that has come about due to the use of Bamboo?

Jason O’Nions: I think bamboo is a great material for any style of bike, but I think its perfect niche is gravel. I’m currently building gravel bikes with 435mm chainstays and 45c tyre clearance, although 50c might fit (I’ve yet to try!).

I’ve also opted to place the flat mount bosses on the seatstay rather than the chainstay due to lack of clearance for the caliper caused by using straight tubing. If I really wanted to I could change my dropout design, but I’m happy with the seatstay mount and that’s probably the mountain biker in me talking! To me, it looks normal. 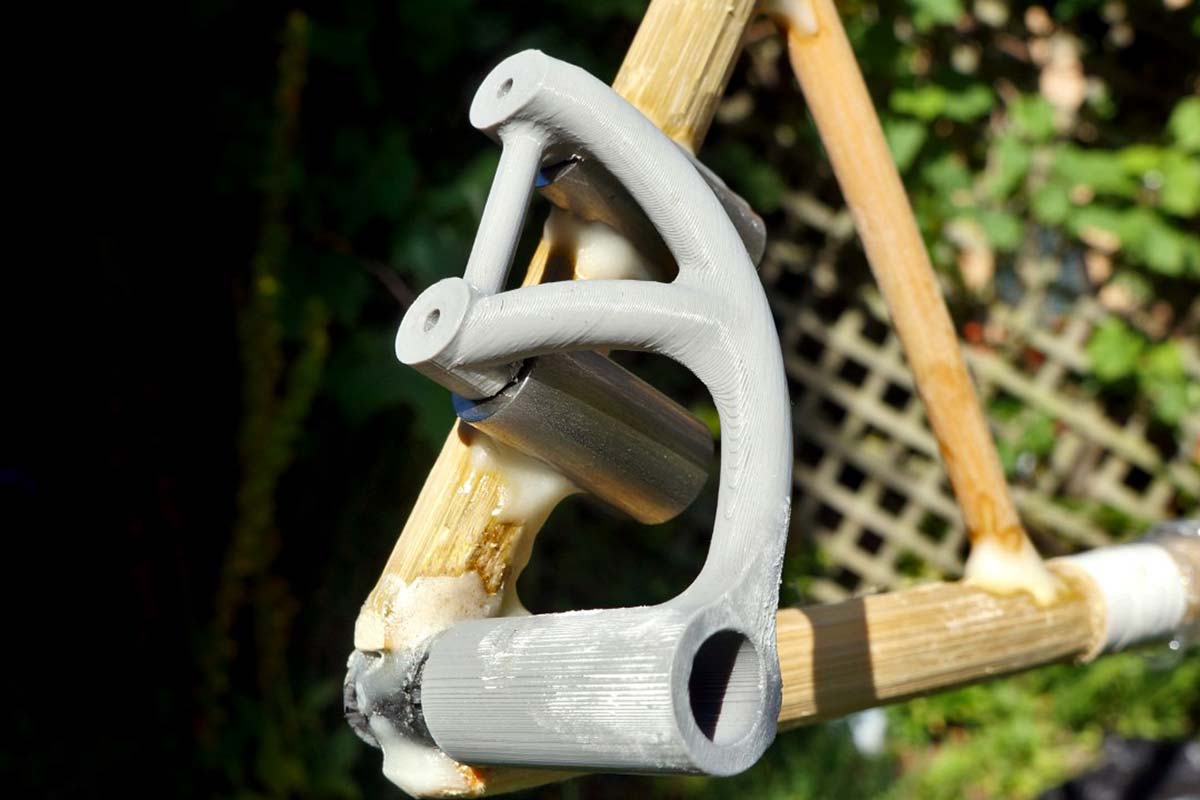 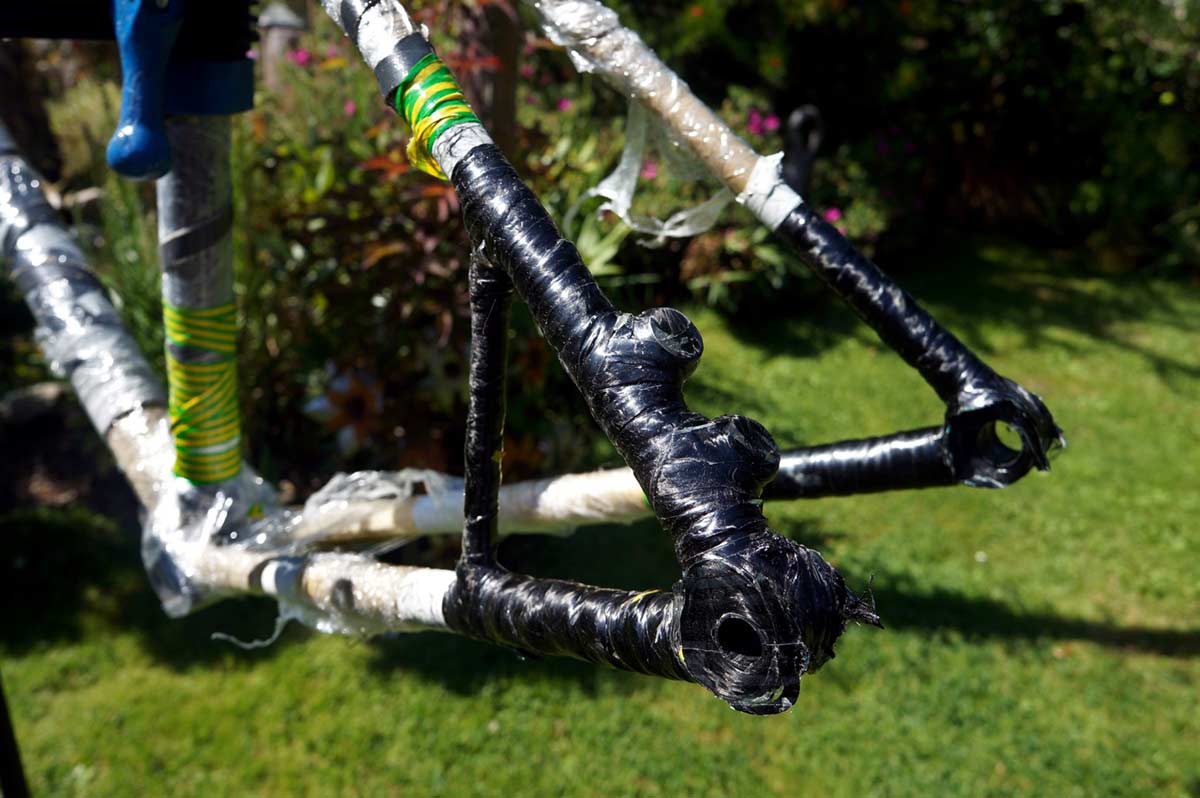 Post “wet” carbon layup on the rear end of the Earthbound gravel bike, ready to be sanded down to perfection 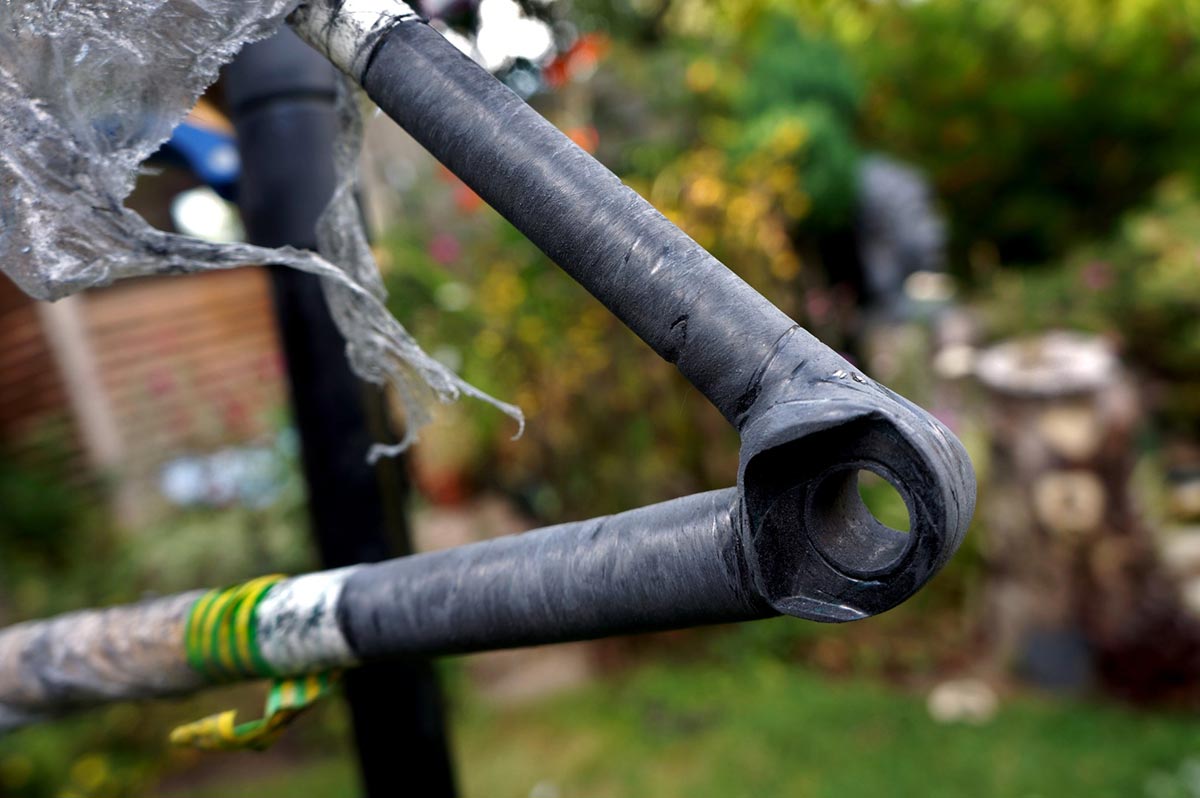 The sanded carbon dropout of the Earthbound gravel bike

Bikerumor: If I wanted to buy an Earthbound Bamboo Gravel Bike tomorrow, could you build it to my specific dimensions and geometry, and how much would it cost me?

Jason O’Nions: I think around £1700 with full custom geometry. The build process of creating and sanding the carbon lugs makes it very labor intensive. Each frame takes around 40 work hours to complete.