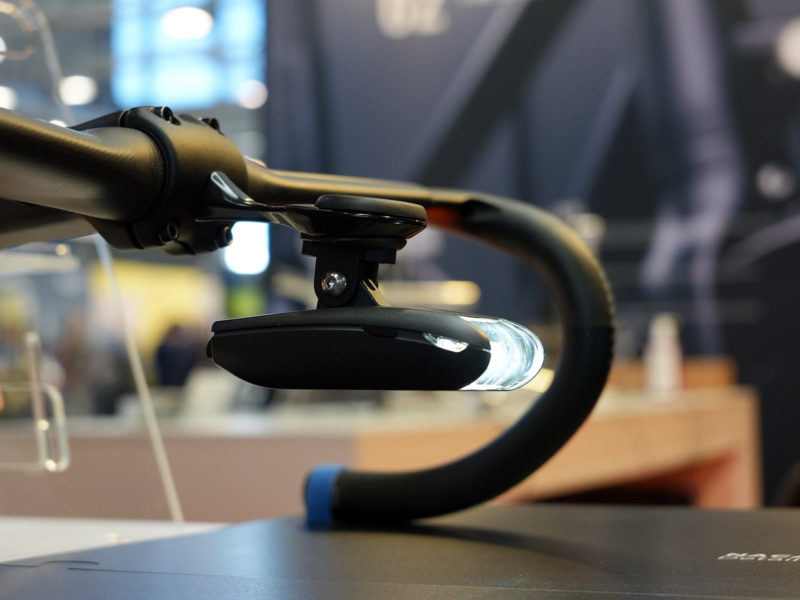 Filed under “why hasn’t anybody done this before” is the beautiful new NACA Road headlight from Lightskin. Developed with a quasi-NACA airfoil shape, the light is designed to minimize drag.

More importantly, its advanced optical design draws on automotive headlamp tech to perfectly light up the road ahead of you with a beam pattern that ensures high visibility at high speeds. But first, the aerodynamics… 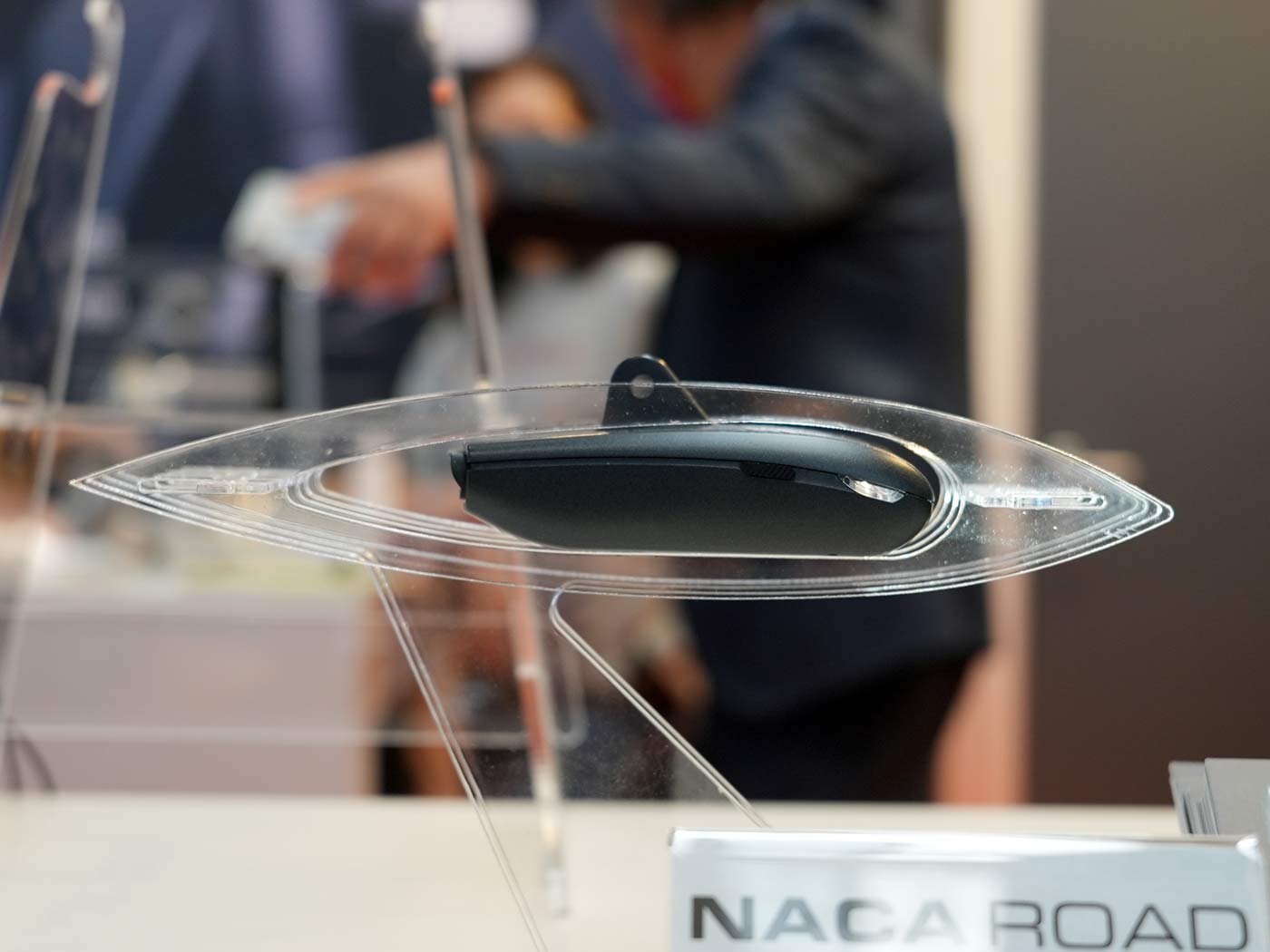 Using a standard two-prong GoPro style mount, it attaches underneath any compatible out-front mount (like the K-Edge MAX or KOM’s Quick Release mount).

What’s important about this particular light’s design is that it is intentionally made for mounting in this position, whereas every other headlamp we’ve seen with a GoPro-style mount is effectively mounted upside down. While many lights use a generally round reflector, some are shaped for placement on top of the handlebars…either way, none of them are emitting a beam pattern that’s optimized for under-the-bar mounting. 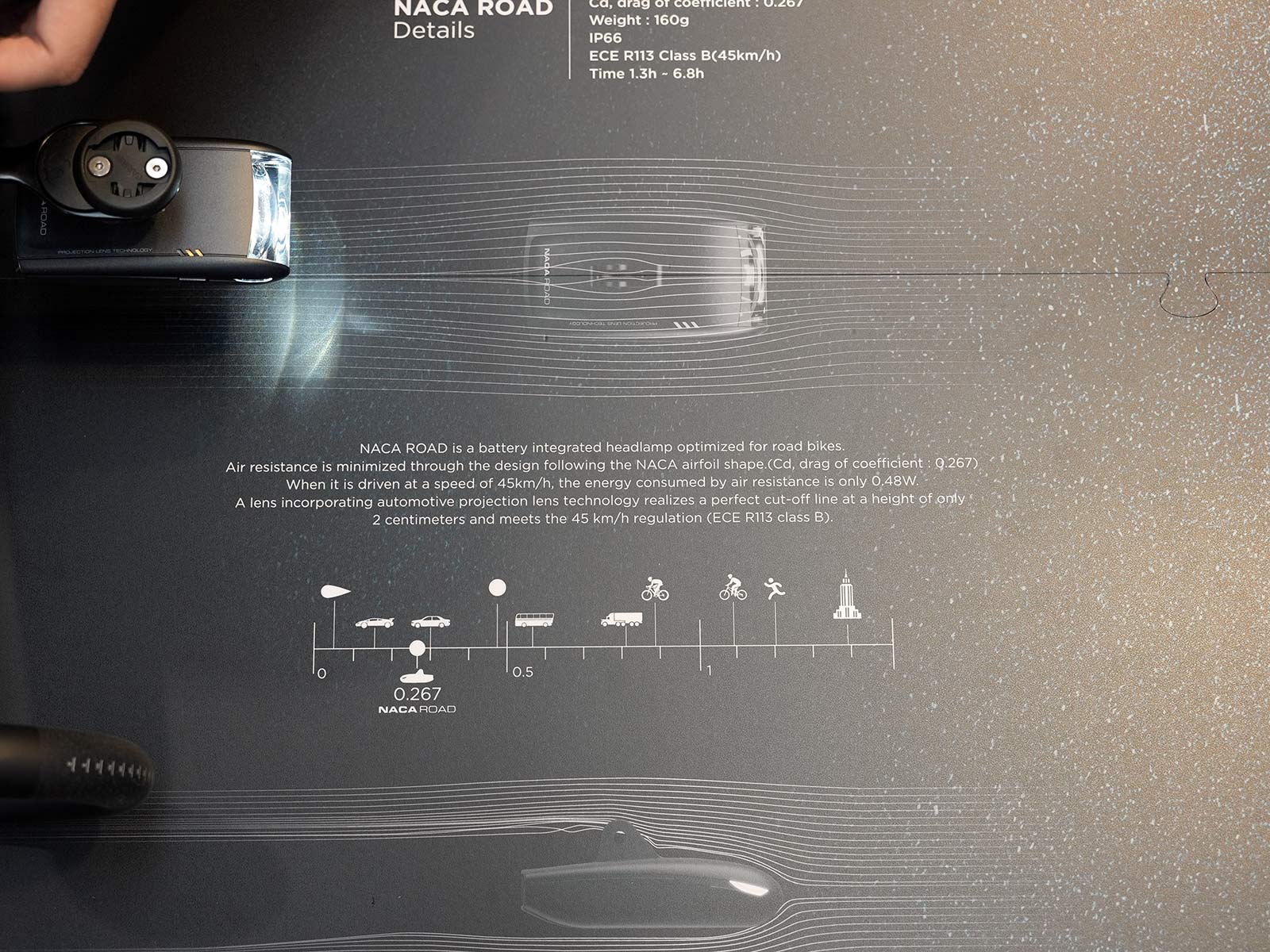 With a minimal 0.267 coefficient of drag and reasonable 160g weight, it won’t slow you down. In fact, it might actually help you go faster…once it gets dark. 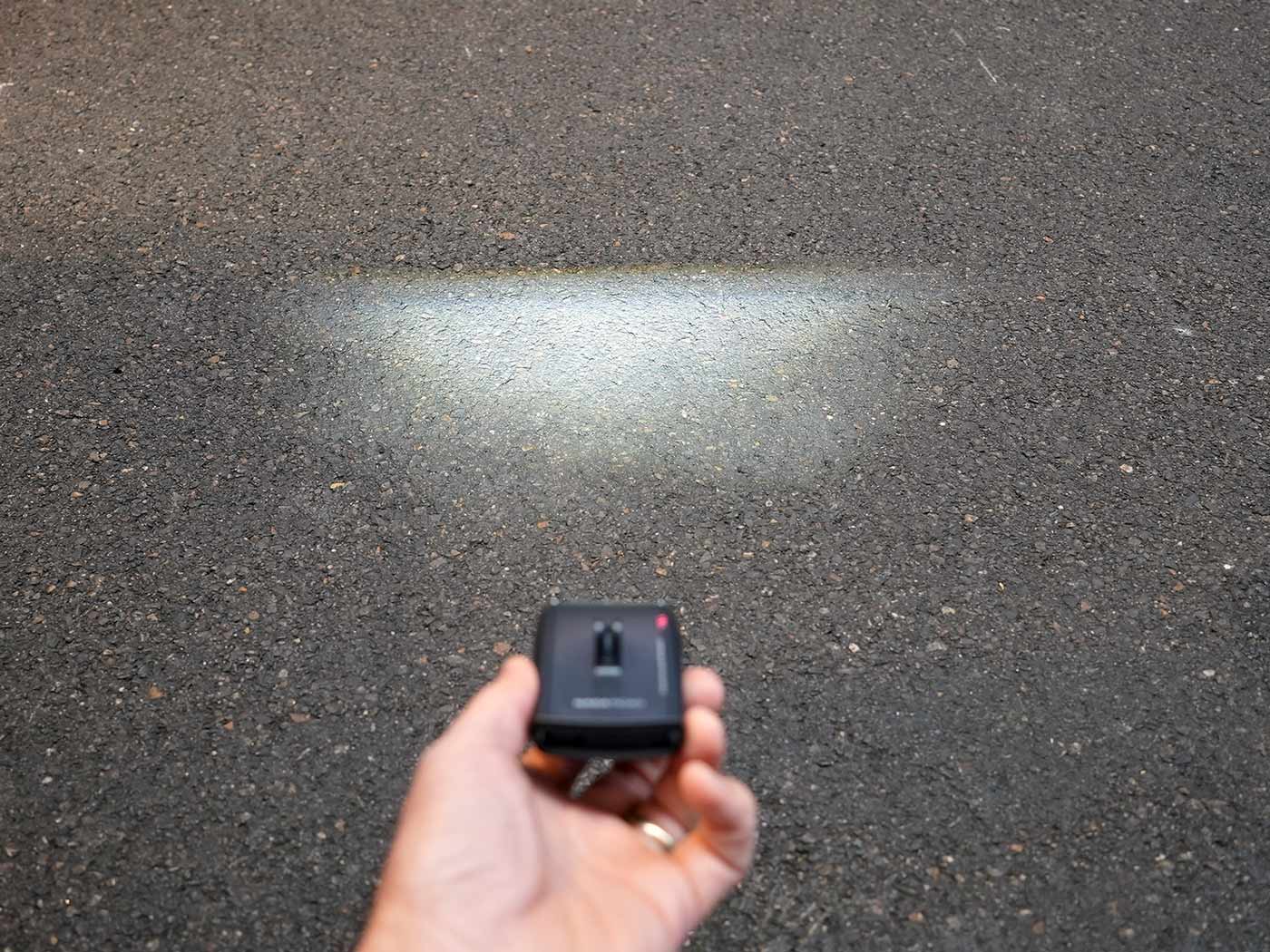 Using a custom reflector with automotive-grade projector and lens, it emits a bright white 520 lumen (52 lux) light in its highest output mode. The top of the light cuts off at a sharp line, giving you maximum brightness at the farthest point from the bike. This helps you clearly see what’s coming up, so you can ride faster without being surprised because you didn’t see that pothole or road kill until the last second.

As the light gets closer to your bike, it becomes more diffused and dimmer to prevent being distracted by stuff that’s too close to react to anyway. This also means it won’t overly illuminate your front tire, which can also be distracting. 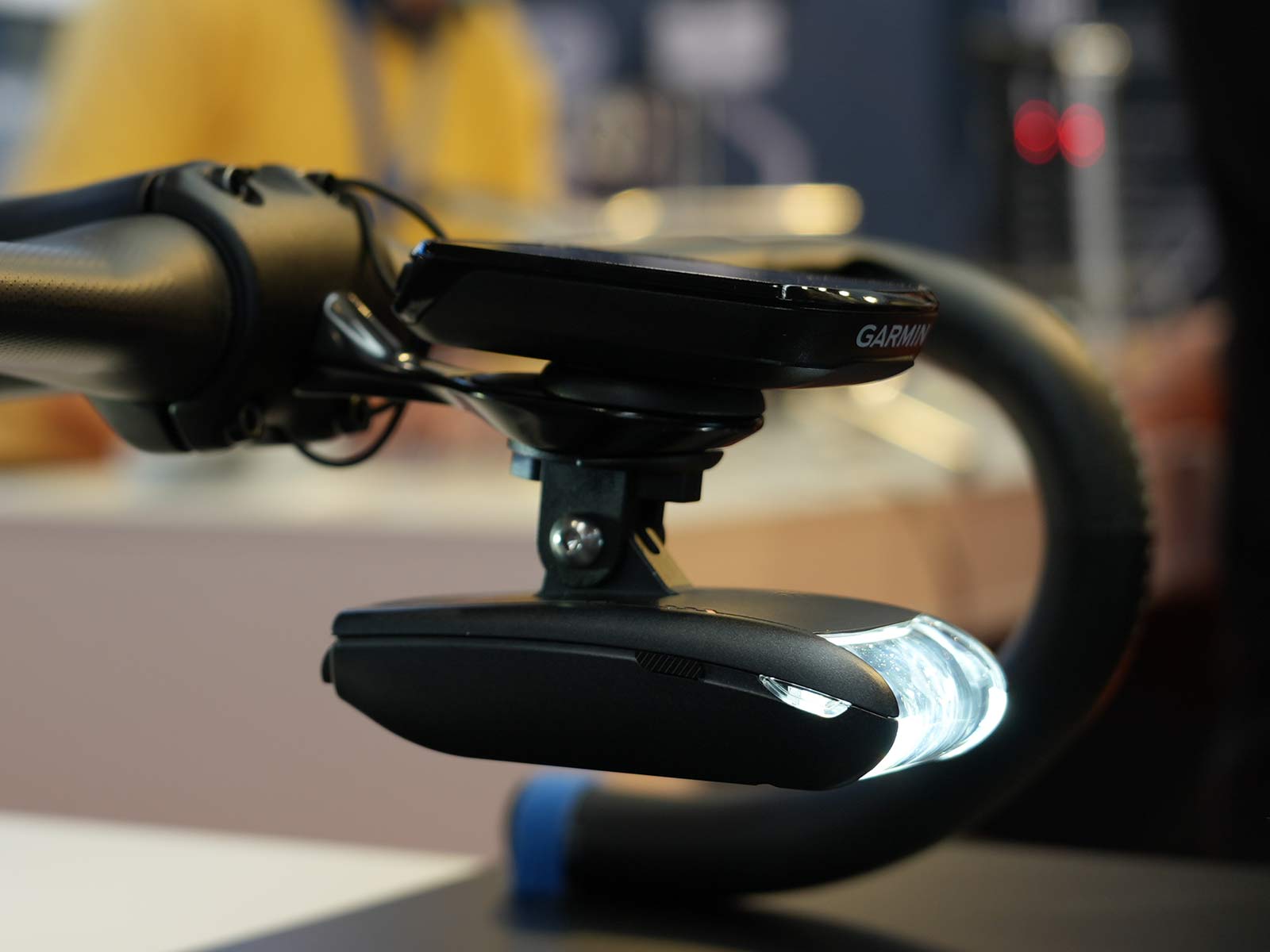 The light is actually designed to be mounted under a GPS cycling computer, relying on that to block the rider’s view of the top of the light. 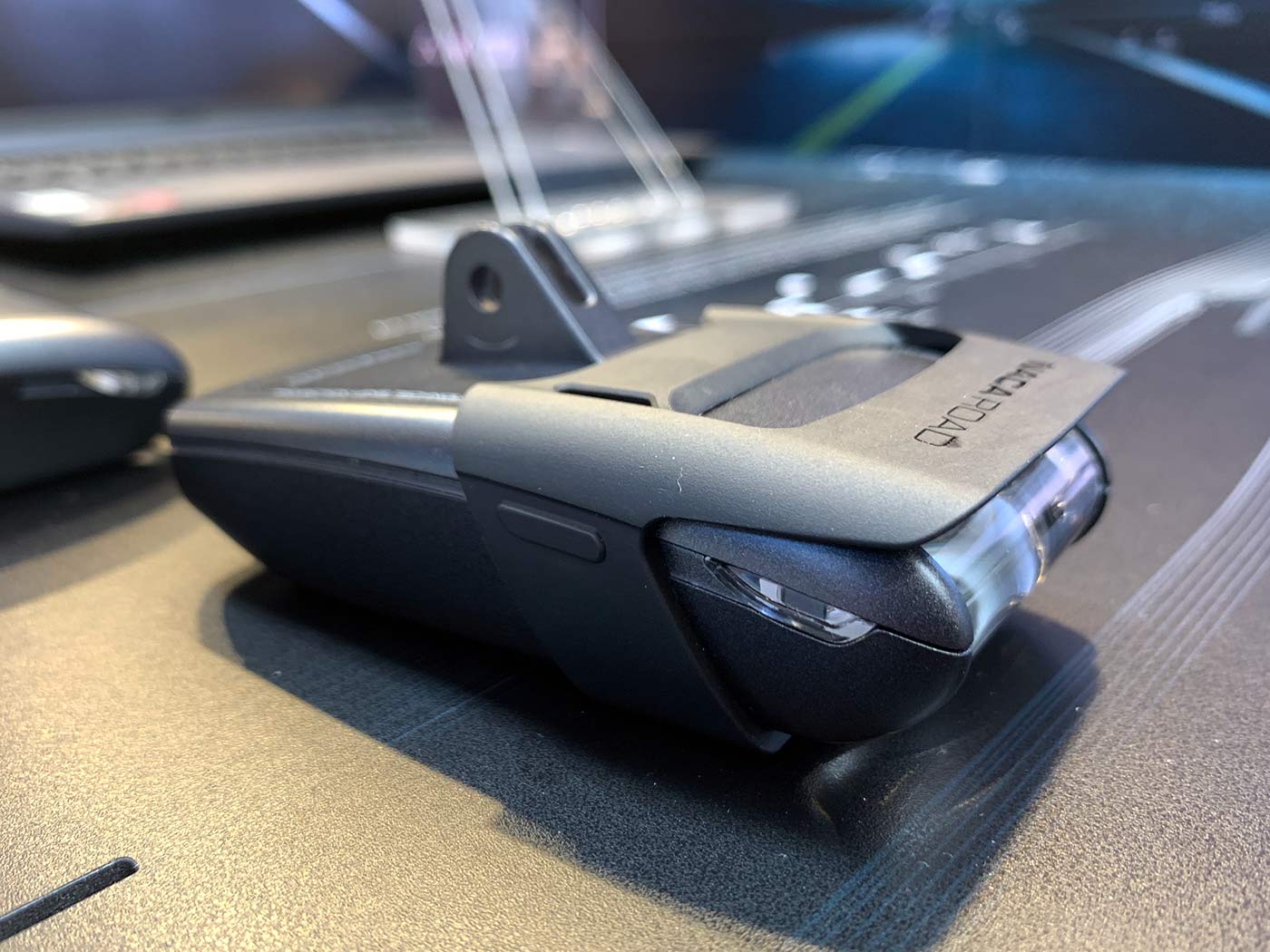 If you were to just mount the light without a computer above it, pop the shield cover into place to prevent it from distracting you. But it does get slightly less aerodynamic with that installed.

The backside is covered with a rubber flap that protects the USB-C charging port from rain and spray. It’ll accept a 2A charger for quick charging, or plug it into a battery pack or dynamo while riding for longer run times. Depending on which of the five modes you choose, output ranges from 140 lumens to 540 lumens, with run times from 1.3 to 6.8 hours.

Retail price will be $275 when it starts shipping in December 2021, preorders are open now. 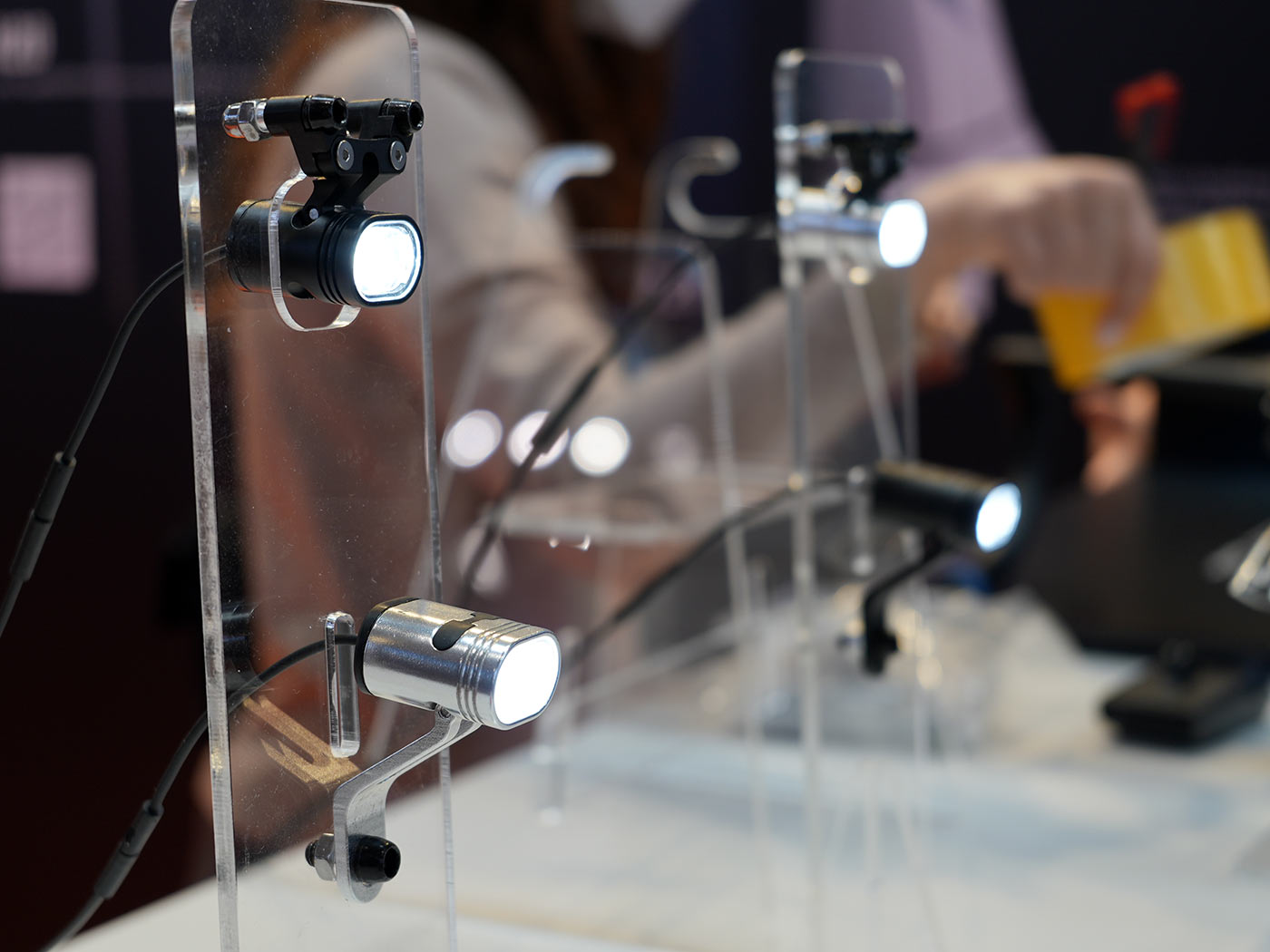 Lightskin also makes the U2 mini light, which they say is one of the smallest, lightest headlights you can put on your bike. At just 25g, it’s too light to be bothered by bumps and vibrations, so it’s more likely to remain aimed where you set it.

Two options are available, one dynamo powered, and one that needs to be plugged into an external source (like an e-bike’s battery or power system). They can be mounted from the top or bottom, too, giving you more options for placement. MSRP ranges from $99 to $119, available in December 2021. 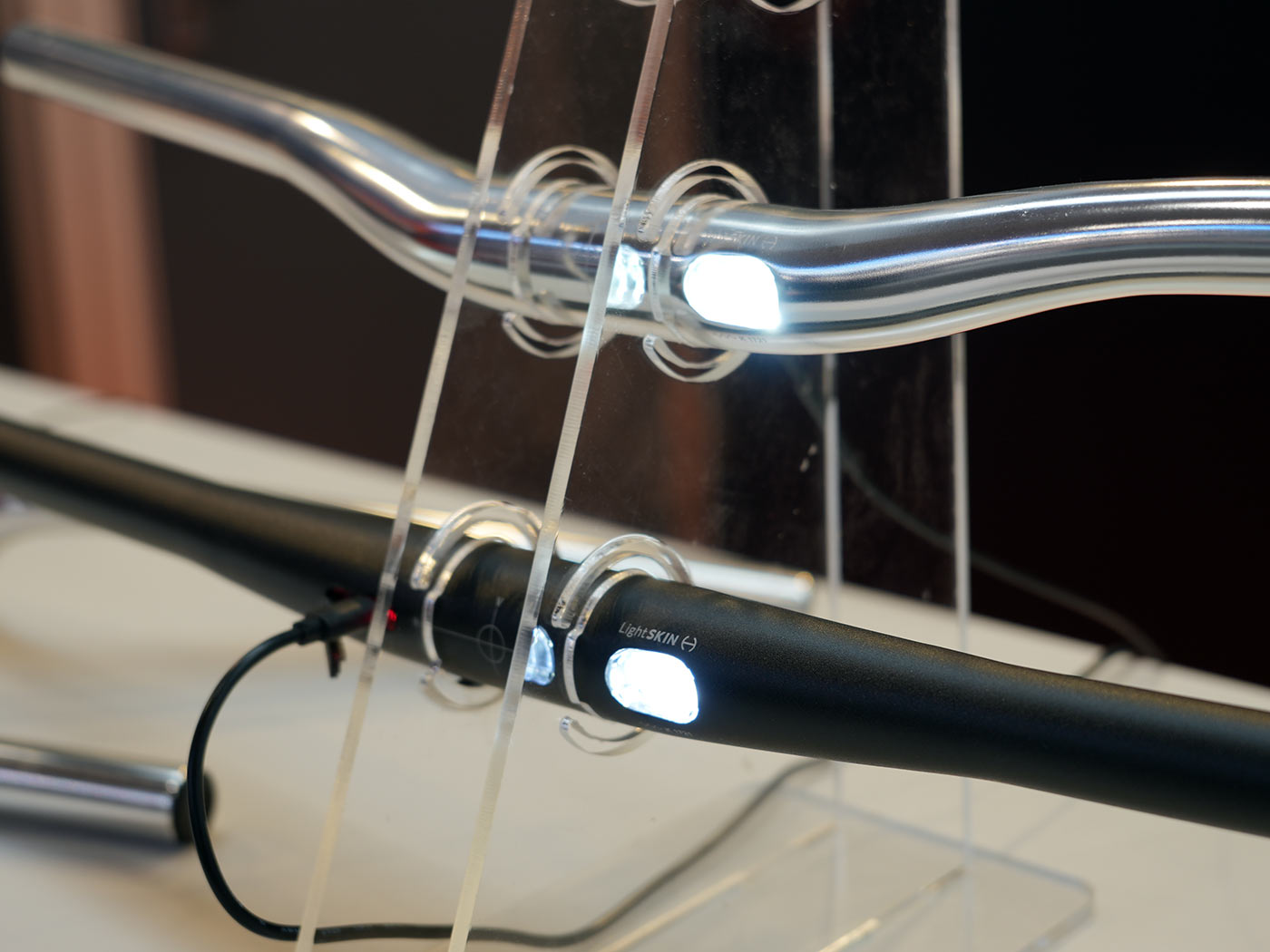 The H2 handlebar series comes in black and silver with flat, riser, and city shapes. Multiple widths are available in some models, too. The integrated headlight puts out 150 lumens and you can get versions that are dynamo powered, that plug into an ebike or battery pack, or have a self-contained USB-C rechargable battery inside. 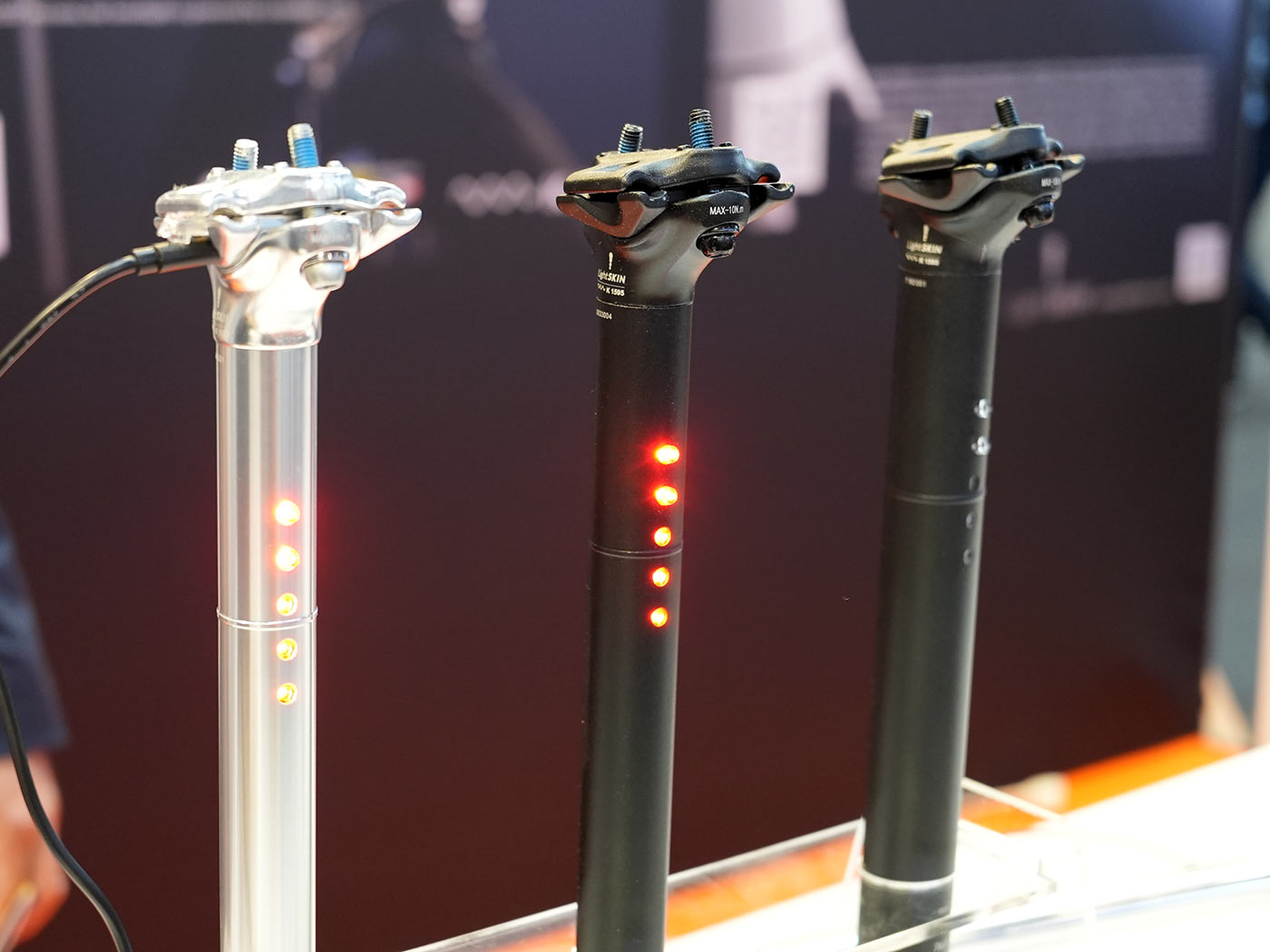 The S311 seatposts provide rear lighting, giving you five LEDs with three sitting flush with the post, and the top two brighter lights protruding slightly to provide side visibility. You can run all five, or limit it to the lower three, depending on local regulations about side lighting.