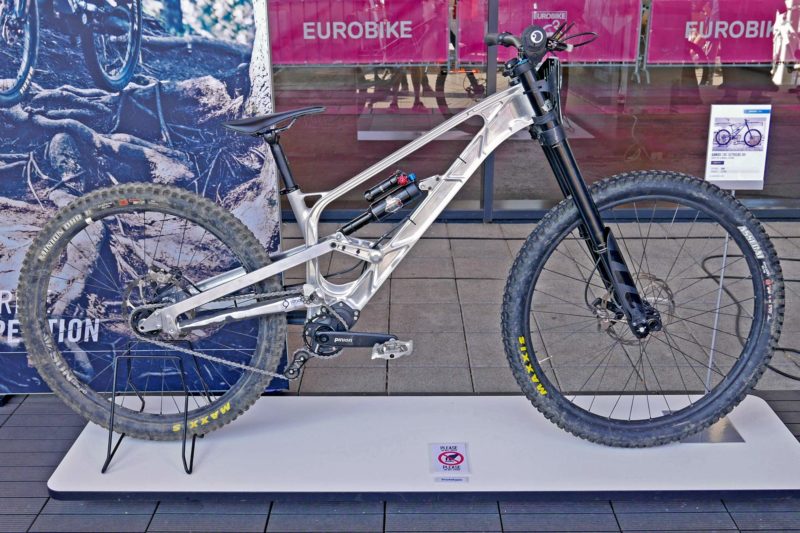 After years of World Cup racing, Swiss bike company Gamux started offering their own customizable alloy Runi trail and Marca downhill bikes in 2020, but are now taking aluminum to new extremes with this all CNC-machined Gearbox DH prototype. Tested in a couple of iterations on the race circuit this season, the CNC 197 Gearbox bike allowed the small company to rapidly refine the suspension and geometry exactly how they wanted, and to easily adopt the bulletproof Gates belt and Pinion gearbox drivetrain. 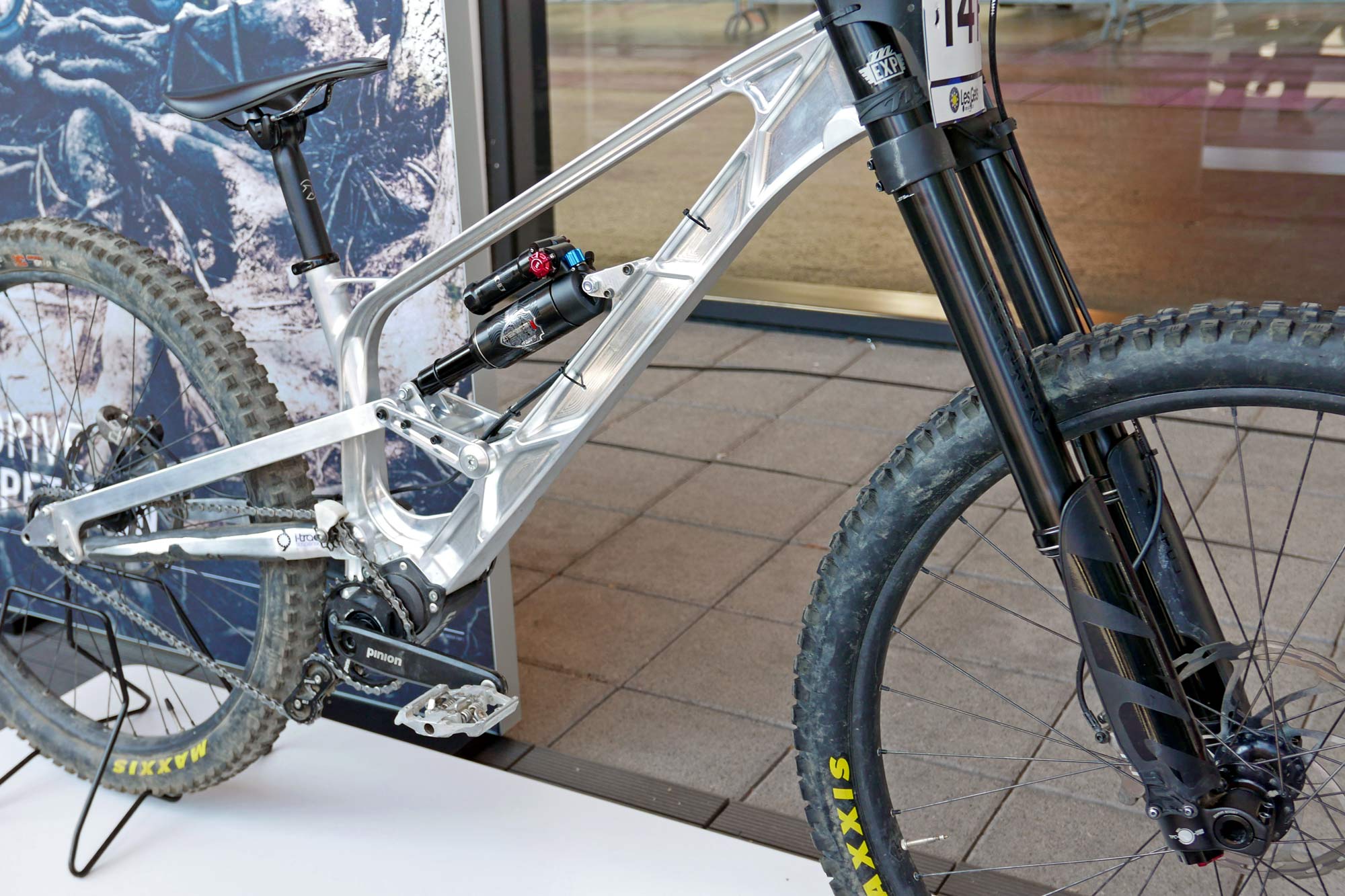 This bike we caught up with in detail at Eurobike is actually the first generation prototype that the Gamux Factory Team was racing in Les Gets back in July, with its more prominent machined webbing struts. If you scroll down to see the complete bike on the blue background and the rendered frameset below – that’s the generation 2 prototype that they actually are racing as I type in Lenzerheide. That’s also the version you can pre-order now – a limited signed edition of the first 100 CNC bikes based on this prototype, so you can be sure to be riding something unique.

Yes, you can pre-order a prototype World Cup DH bike now and have it built up and ready to race in time for the start of the 2022 DH World Cup in the spring… or the reopening of your local bikeparks after a winter of skiing…

Why Pinion? What are the advantages of gearbox of a DH bike? 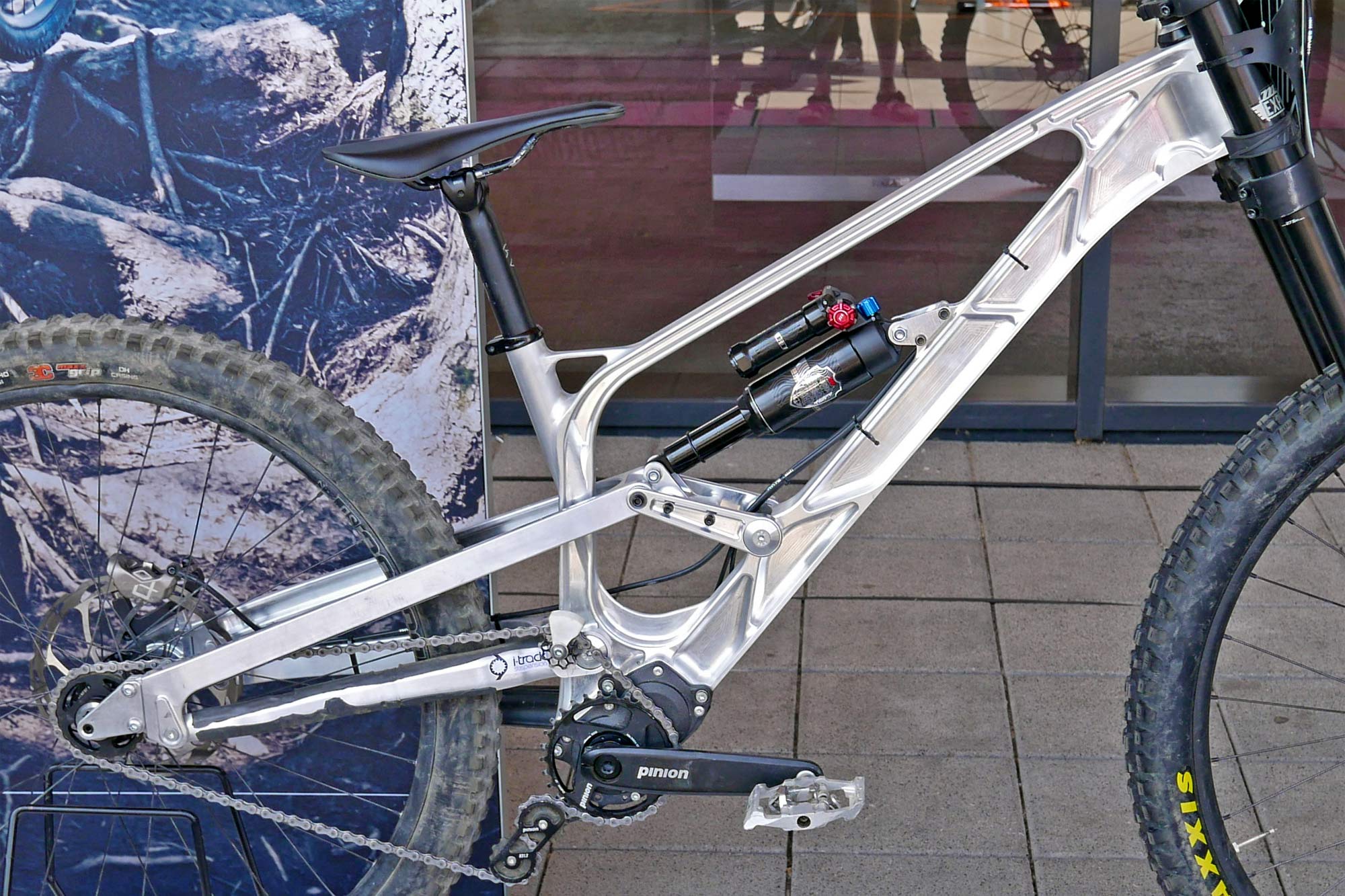 Gamux explains that they have moved from external derailleur drivetrains to the Pinion gearbox system for a few key reasons that give them more control over the bike design and performance. A big benefit of the Pinion is suspension optimization – both decreased unsprung weight and more ideal frame+drivetrain weight distribution, plus they say that it allows for more freedom in suspension design overall.

CTO Pascal Tinner says that control over weight distribution is key, as “descending ride dynamics are 99% of the equation” in DH racing. Tinner does admit that grip-shifting is limiting broader adoption of Pinion for the time being, but hopes a trigger shift or electronic shift solution is in the works (hint, hint.. Pinion!)

Not to be overlooked is the selection of the ideal gearbox for the application. This particular prototype was spec’d with a Pinion C1.6 gear box, but Gamux has also been racing DH with the C1.9XR, as well. And of course, reduced crash damage and overall reduced drivetrain maintenance in taxing weather conditions, too. 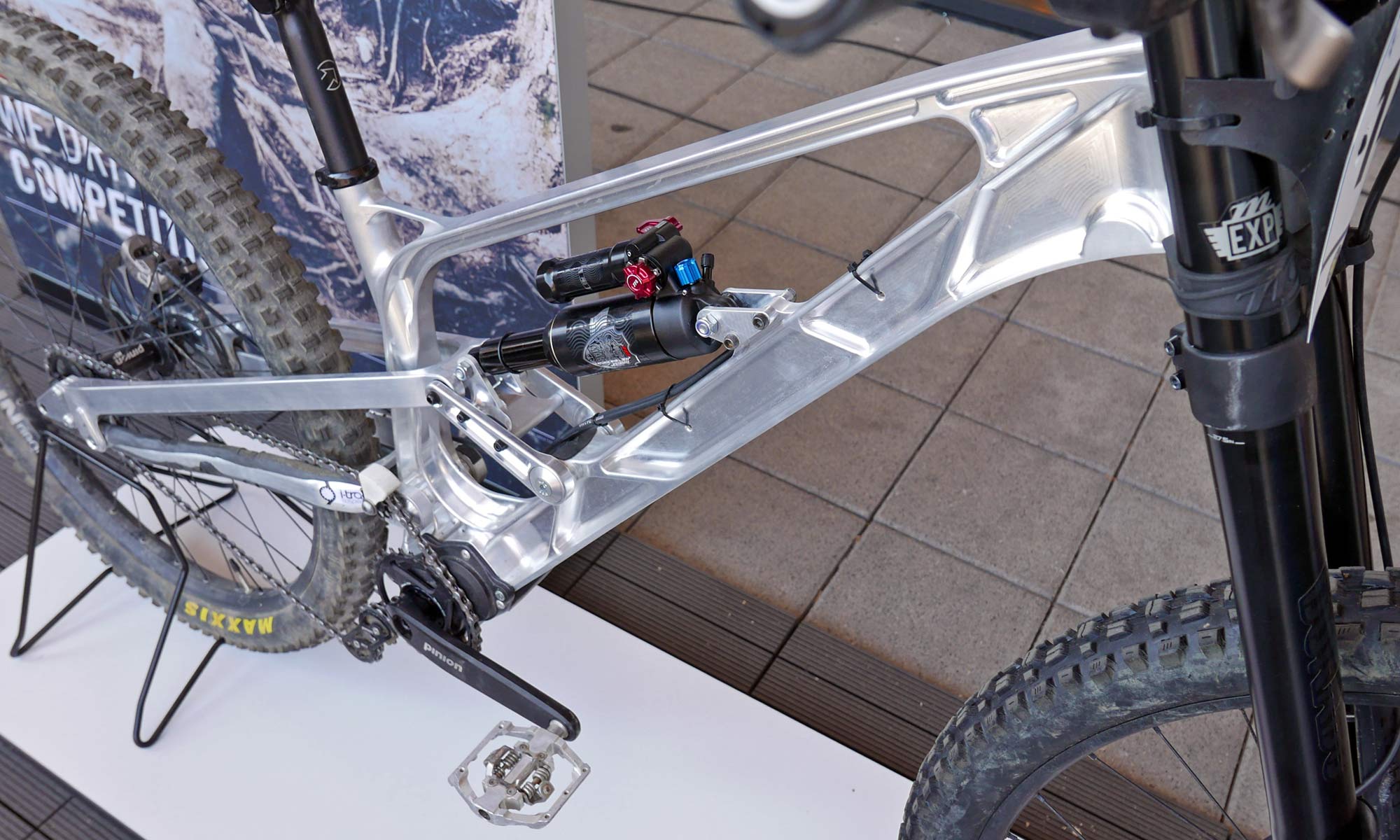 So why opt for the complex alloy machining vs. the welded aluminum first gen Gamux bikes?

CNC machining also gives them more design freedom when shaping the frame without needing expensive custom tooling like their tube-to-tube frames require. That also means they can take a new completed design from the computer to a rideable prototype in just a couple of weeks, vs. much longer for more conventional construction.

And the machining allows for tweaking of a “unique flex characteristic” while having control for “almost perfect weight distribution” when paired with the Pinion gearbox. All in a complete DH race bike that weighs a claimed 17.5kg complete. 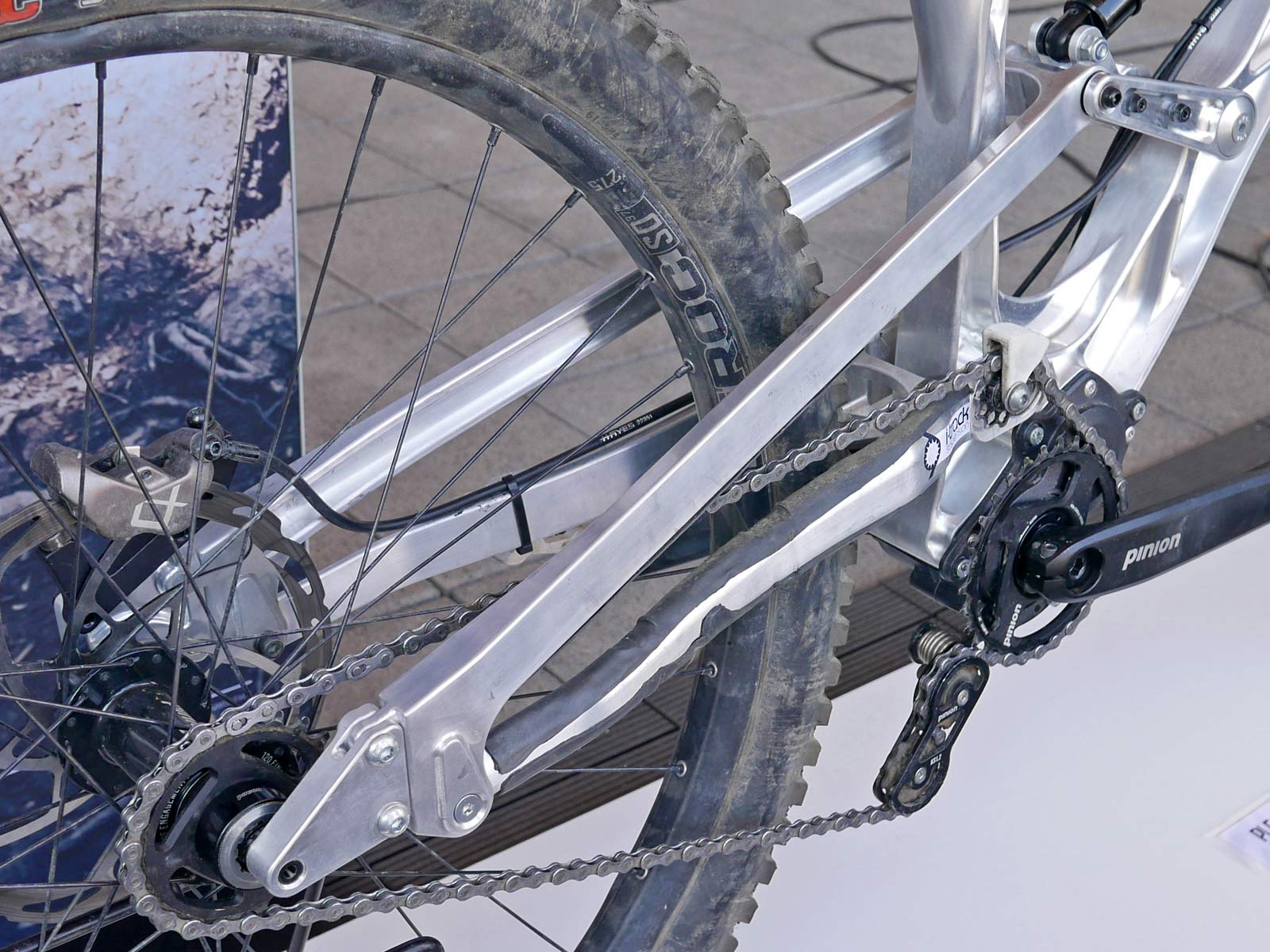 The Gamux CNC 197 Gearbox DH gets 198mm of rear travel (we’ll let that slide, as both name & travel may still be subject to change by a millimeter between now and February). And it is a mullet bike with 29″ front & 27.5″ rear wheels.

The alloy bike will feature Boost 148 spacing, a 50mm chain offset Pinion C-Line gearbox with a tensioner just behind the BB, and a 250x75mm metric shock with swappable linkage “bones” that allow for Coil or Air-specific suspension kinematics. 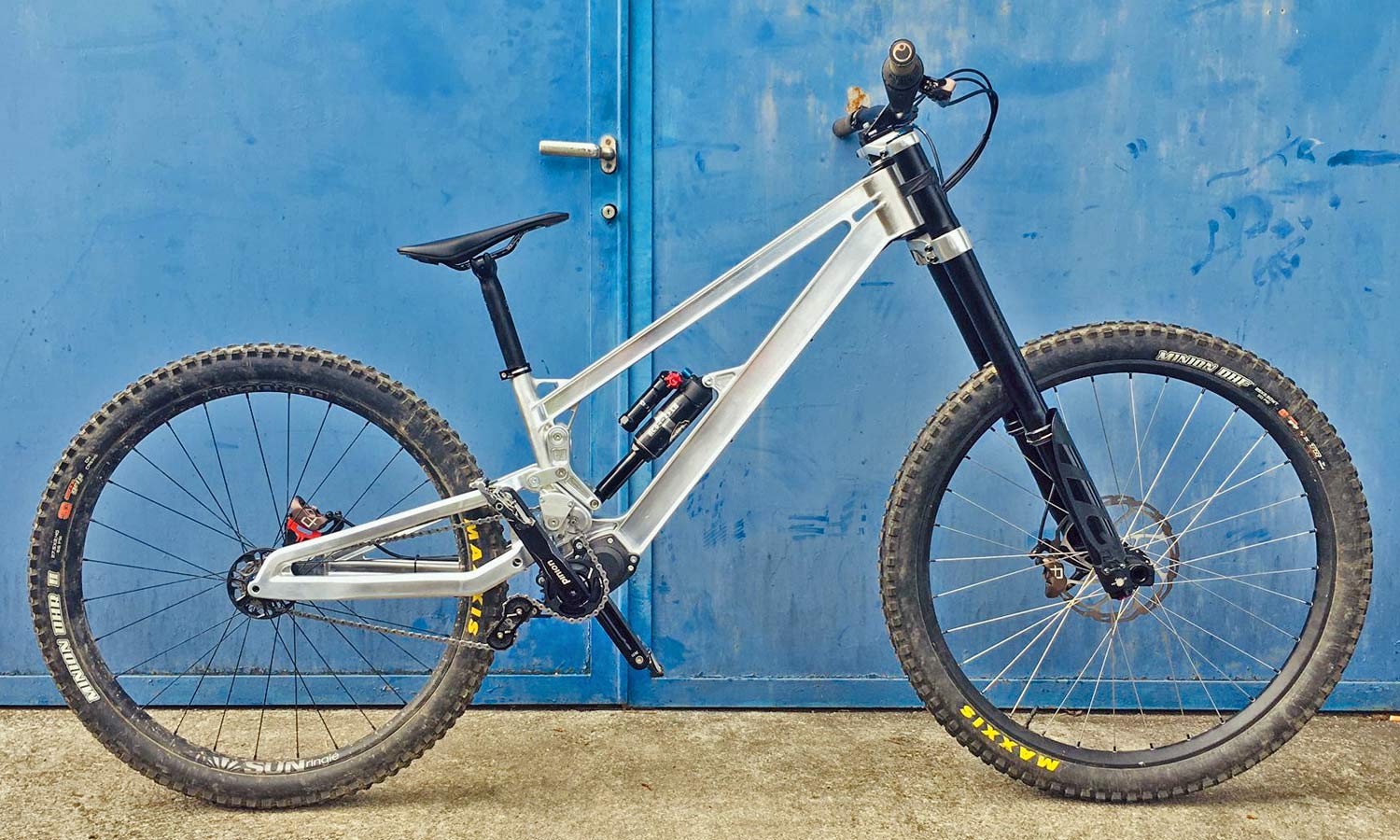 Gamux has just opened up a limited edition pre-order of this CNC 197 Gearbox DH prototype, giving prospective buyers a chance to lock in one of the first 100 frames, which will be individually numbered and signed. Buyers can pick from one of two stock but adaptable sizes/geometries S1 or S2, and either get their machined frame with a raw or dark anodized finish. 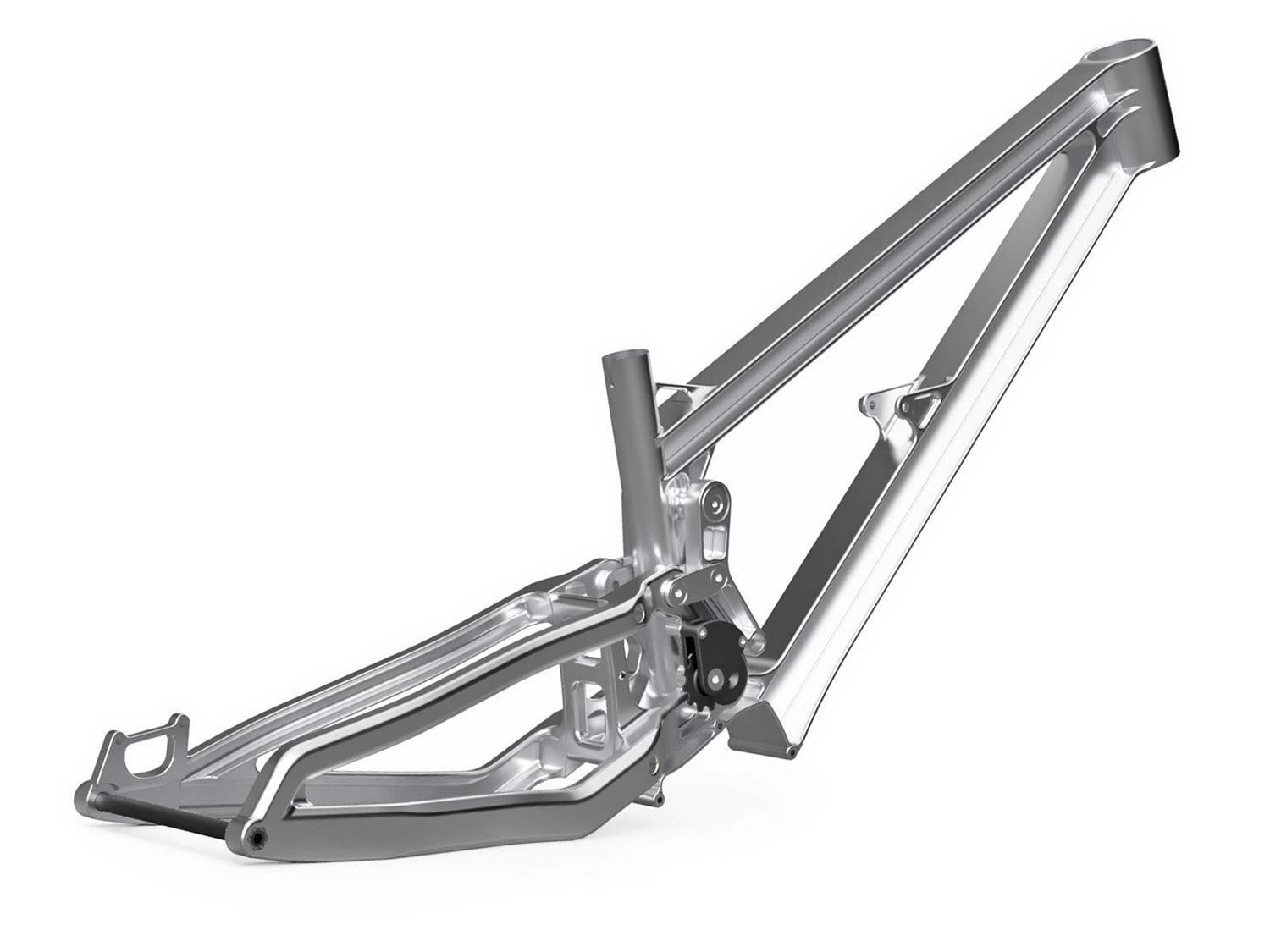 The pre-order process is open now on their website through October 30, with production bike expected to roll off the CNC machines in Germany starting in February 2022. For now you only need to put 100 Swiss francs (~$110/92€) down to secure your production slot, but it’s going to cost a lot more than that. Once you get a spot in the line, Gamux will help you sort out you bike build and you’ll need to pay 50% of that before it goes into actual production. 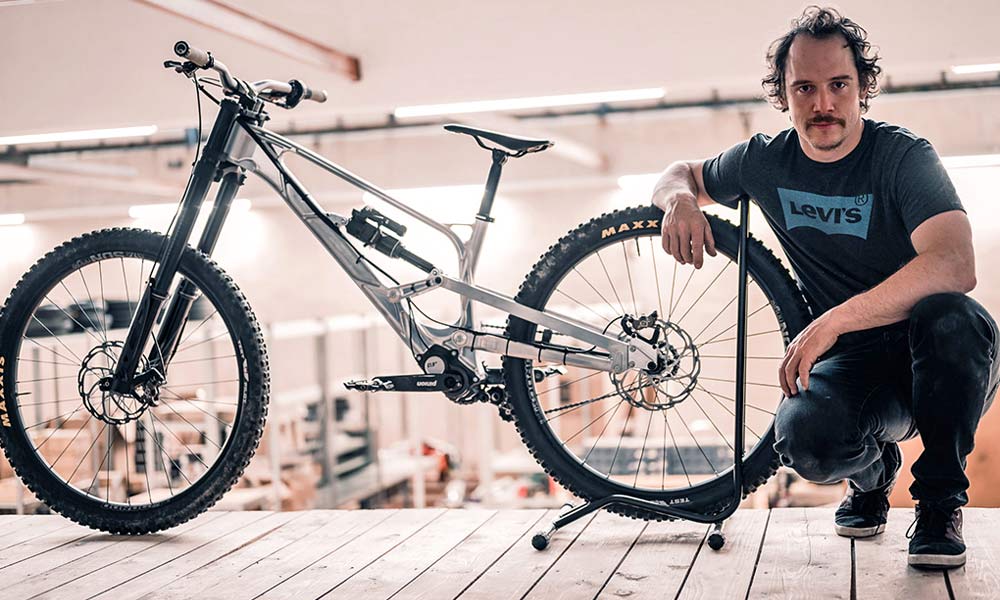 Pinion sat down for a face-to-face chat with the head of Gamux and its Chief Technology Officer, Pascal Tinner this summer for a more detailed chat about the team’s move from derailleurs to gearboxes. You can read that in full over at Pinion.eu, as well as find some more photos of the bike and its testing. 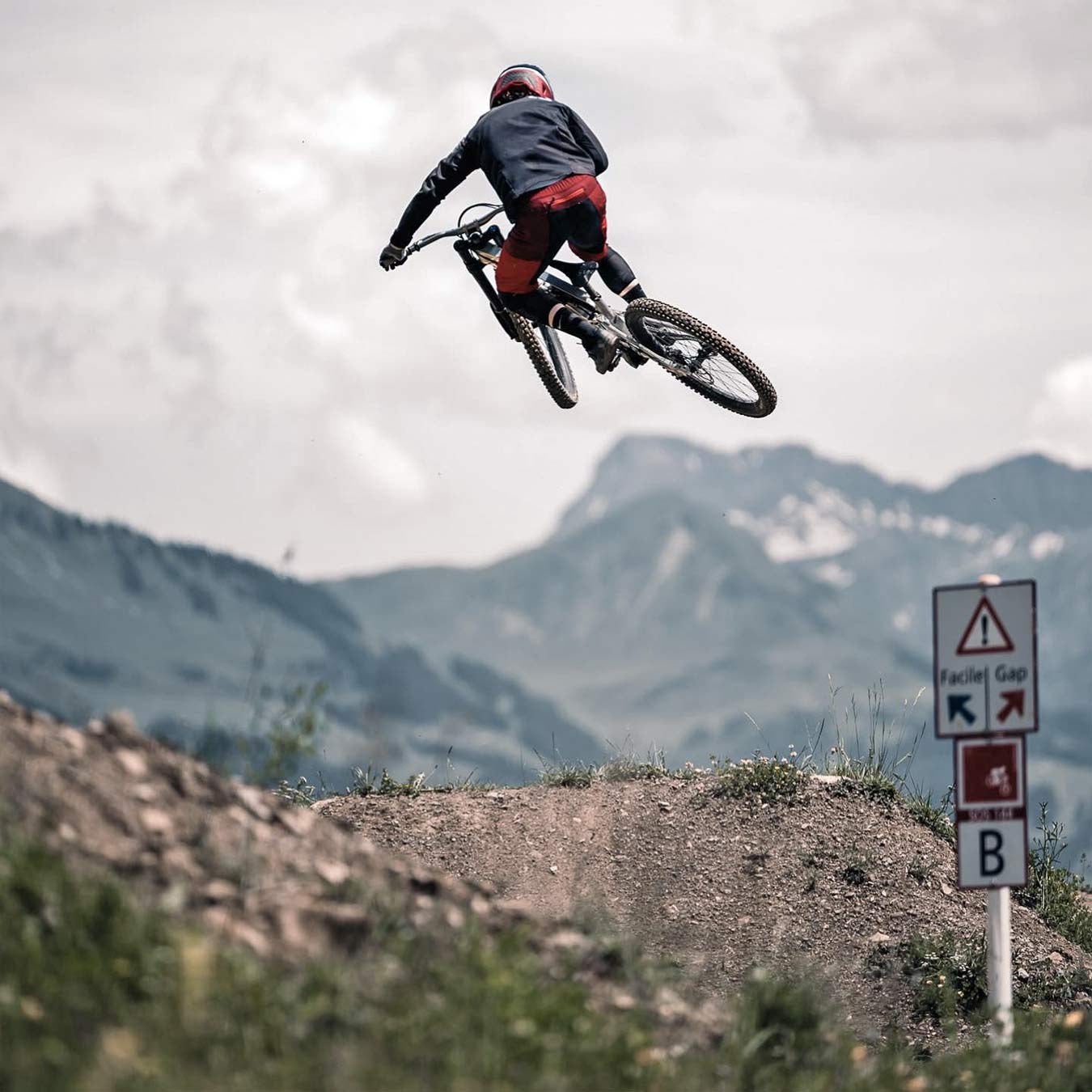 Now, sit back and catch up with the Gamux Factory Racing team as they recap another weekend of racing World Cup DH in Lenzerheide, Switzerland. And we’ll keep our eyes open as Pascal Tinner has admitted outright that a new Pinion-equipped trail bike is already in the works, “but more on that later…”