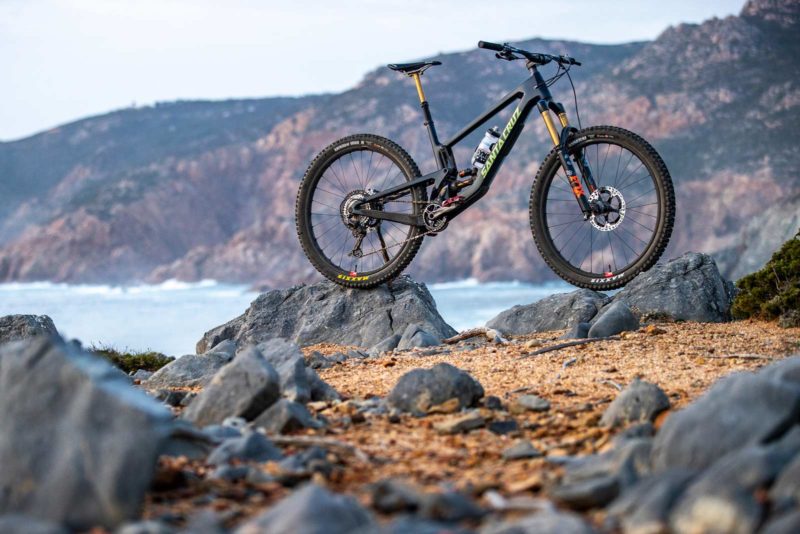 Santa Cruz Bicycles has released the 2022 Megatower, now a 165mm travel 29″ enduro bike sporting their iconic VPP suspension platform. A longer stroke shock offers increased rear wheel travel and a lower overall leverage ratio, designed to bring so-called “near V10 performance in an up-down-repeat package”. The launch delivers no fewer than 11 models to choose from over 7 price points ranging from $5,649 USD up to $13,999 USD. 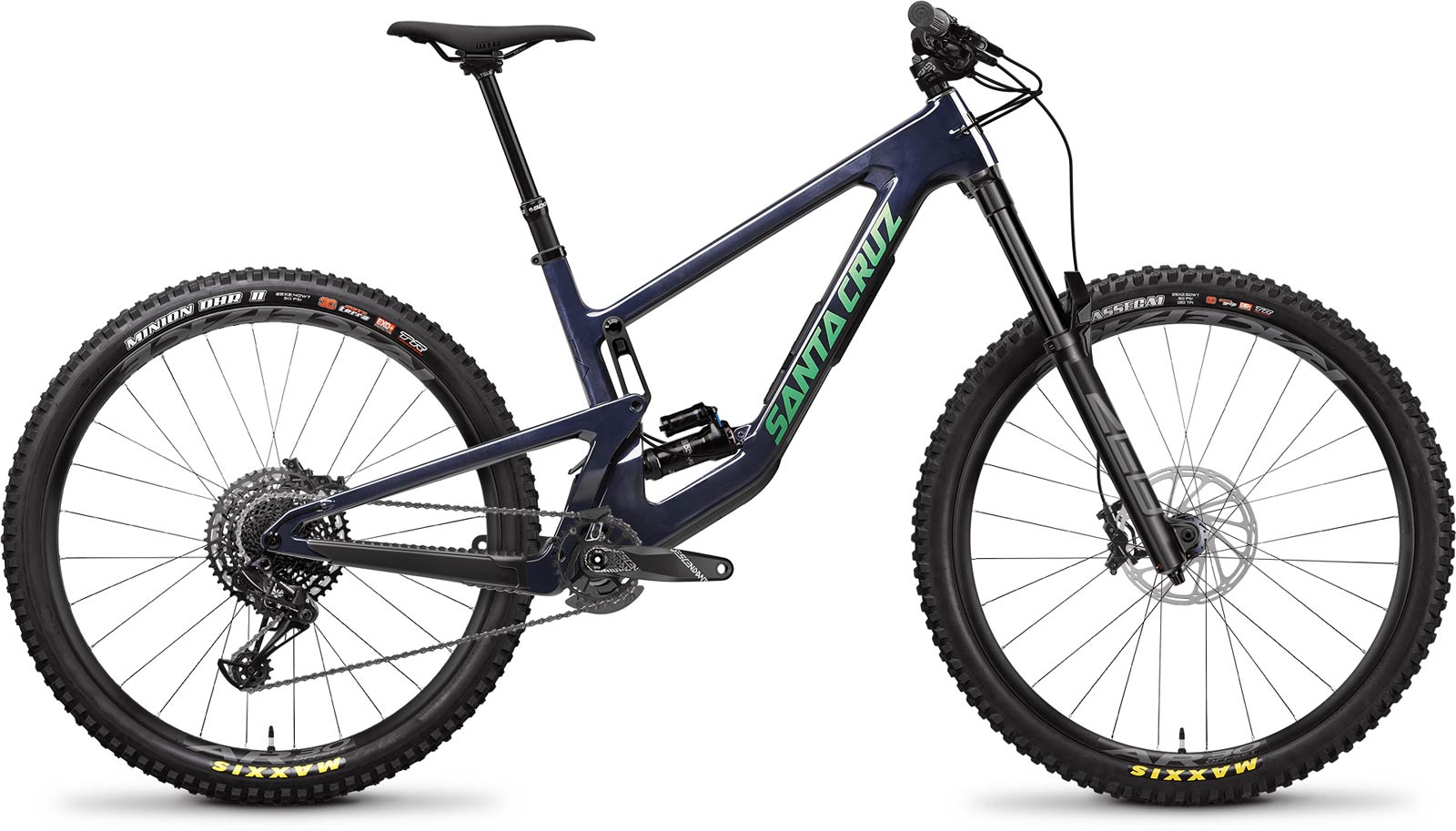 From its silhouette, you’d be hard-pushed to spot any major differences between the previous Megatower and its latest incarnation. The lines of the front and rear triangle are almost identical, and you’d be unlikely to recognize that longer stroke shock unless you got your measuring tape out. Only then would you recognize this bike is, to no one’s surprise, longer and slacker than its predecessor. 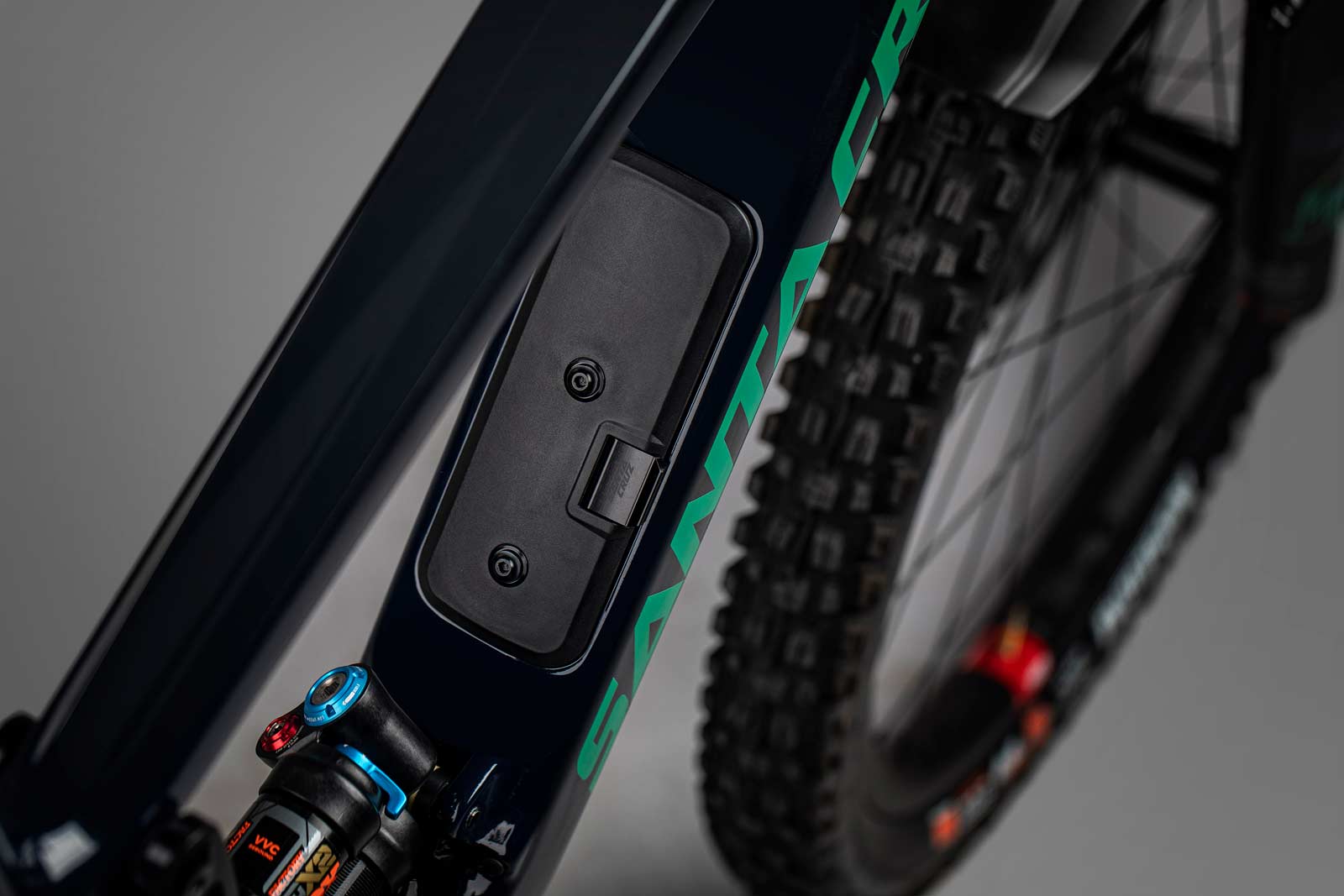 A major giveaway that this is a new frame can be seen on the downtube, in the form of a storage cavity aptly named the Glovebox, which does not arrive empty; it is home to a Tool Wallet and Tube Purse, shown to be able to accommodate a small hand pump, multitool, innertube and tire plugs, i.e., everything you’d need for most trail-side fixes. 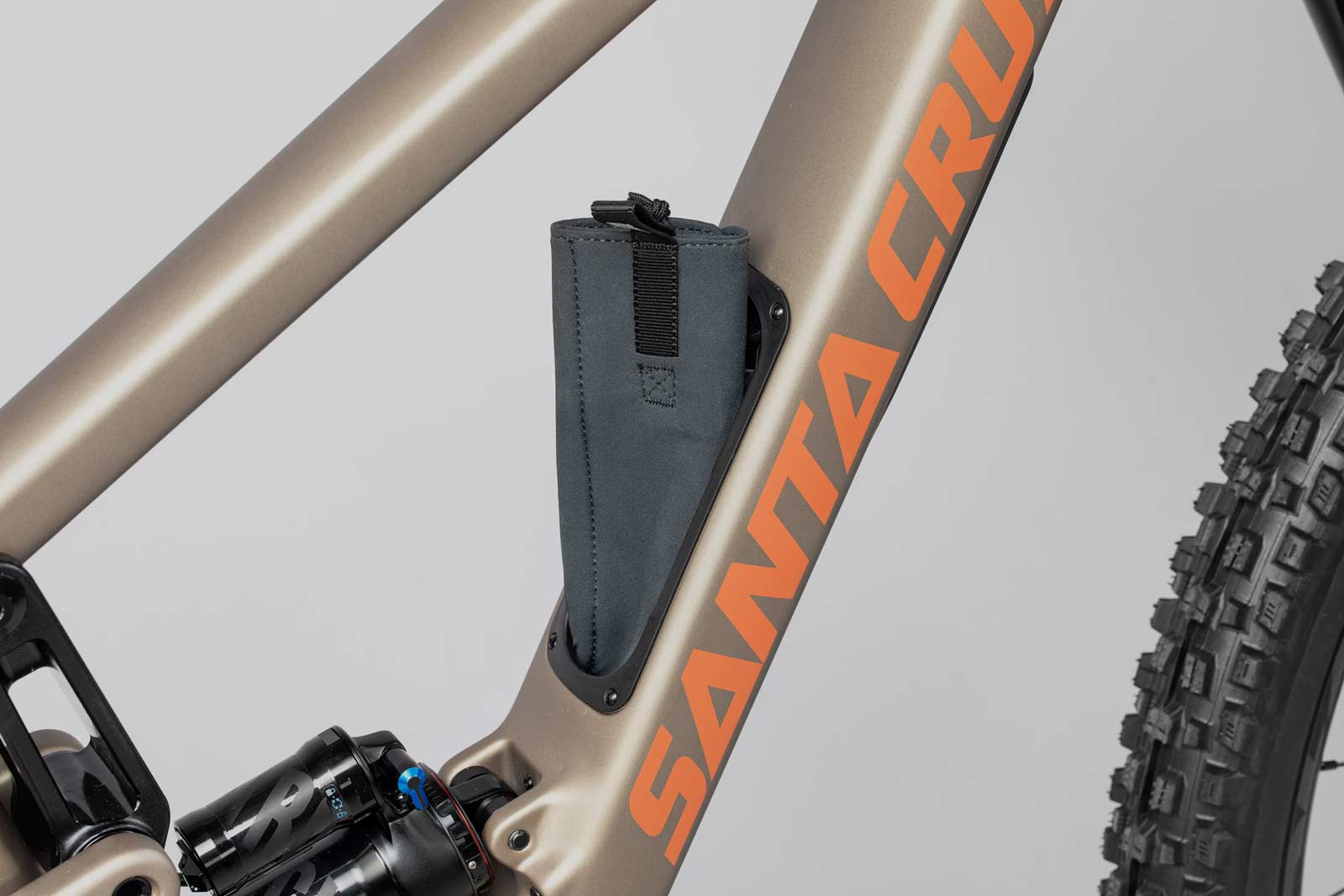 While numerous brands are already making use of the downtube for tools and spares storage, Santa Cruz reckon their execution of it is the most refined you’ll see. 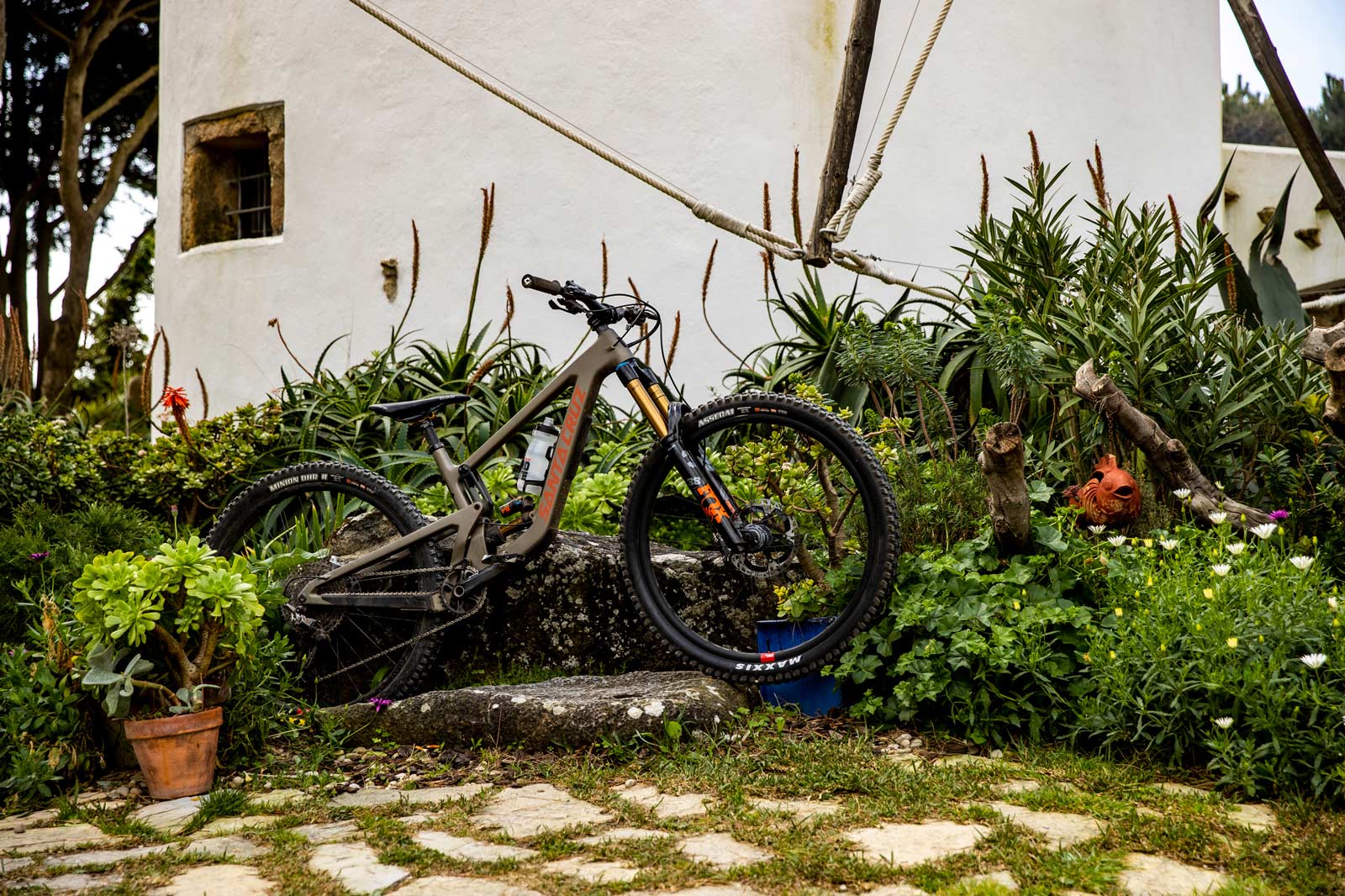 You may also notice the absence of a flip-chip at the dropouts. While scope to adjust rear-center length is no longer, what we do see is a proportional approach to frame geometry. What does that mean? Well, as the frame’s front-center measurement increases from S-XXL, so does the rear-center length. While the previous Megatower saw a 436mm rear-center for every frame size, the new model’s rear-center grows from 437mm in S to 448mm in XXL. We’ve seen Santa Cruz do this for their V10 Downhill Bike, but this is the first time they’ve gone the whole hog with any trail bike. 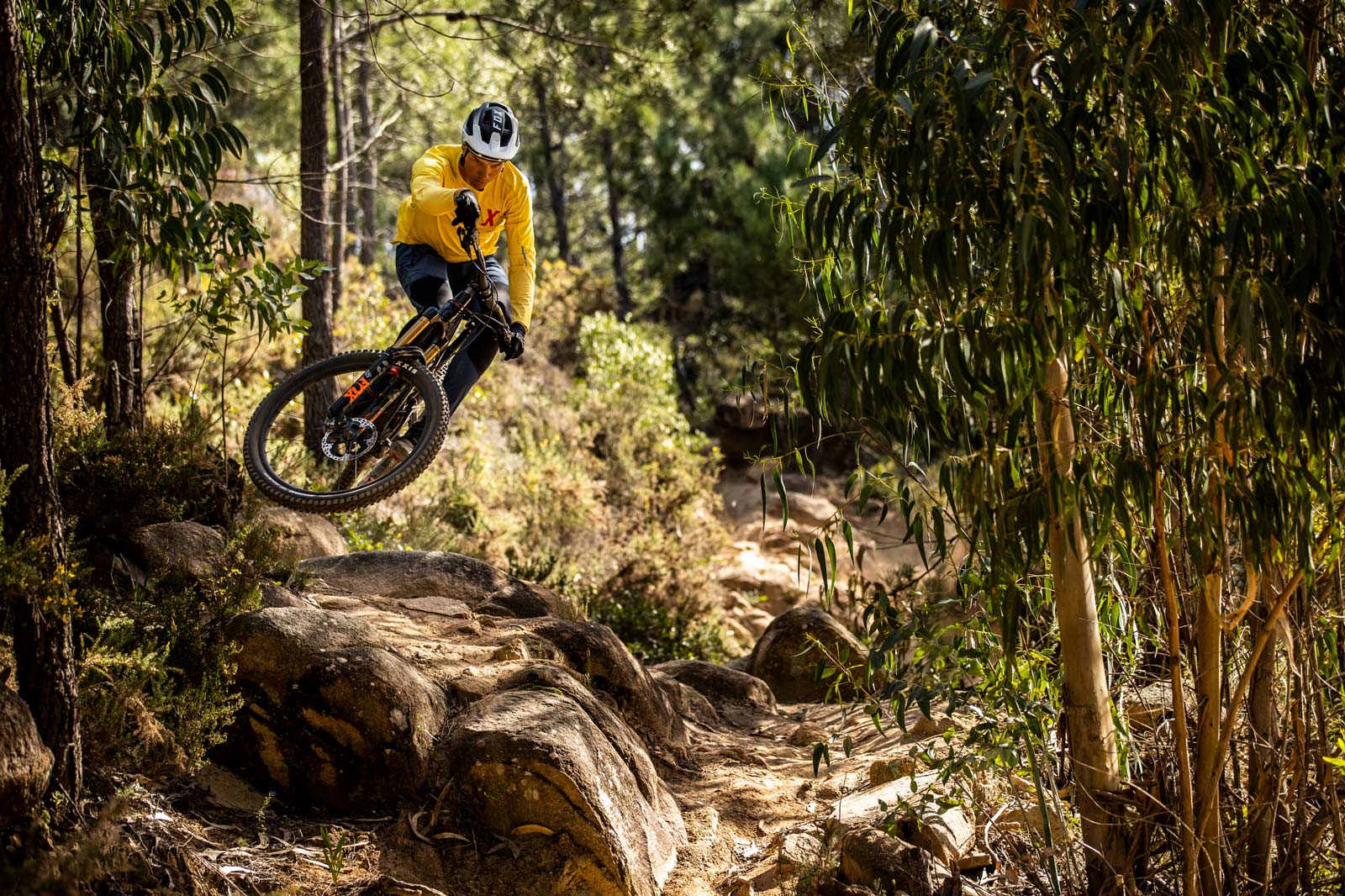 Santa Cruz wanted to give all riders the same ride feel, whether that rider is Greg Minnaar on an XXL or indeed myself on a size small

The proportional length rear-center concept is something we’ve discussed quite a bit on Bikerumor, having invited six major brands (including Santa Cruz) to comment on this often more expensive approach to frame design. Seb Kemp, the Brand Manager of Santa Cruz Bicycles said, “through our research and feedback of riders, it was felt that adjusting chainstay measurement for each frame size was a good thing to continue doing so that every rider, no matter their height, gets the same balanced geometry”.

Reach is increased this year, but not by any staggering amount. The range now spans 427mm to 517mm, coming in at 472mm on the large frame representing a growth of 5mm.

The Megatower’s head tube angle is relaxed to 63.5° for 2022, while its seat tube angle stands to attention at 77.5°. Like the rear-center length, the seat tube angle differs slightly across frame sizes, at its steepest on the large frames and its slackest on the smaller ones. This ensures taller riders don’t end up too biased toward the rear axle in the seated pedaling position, struggling to keep the front wheel grounded on steeper climbs. 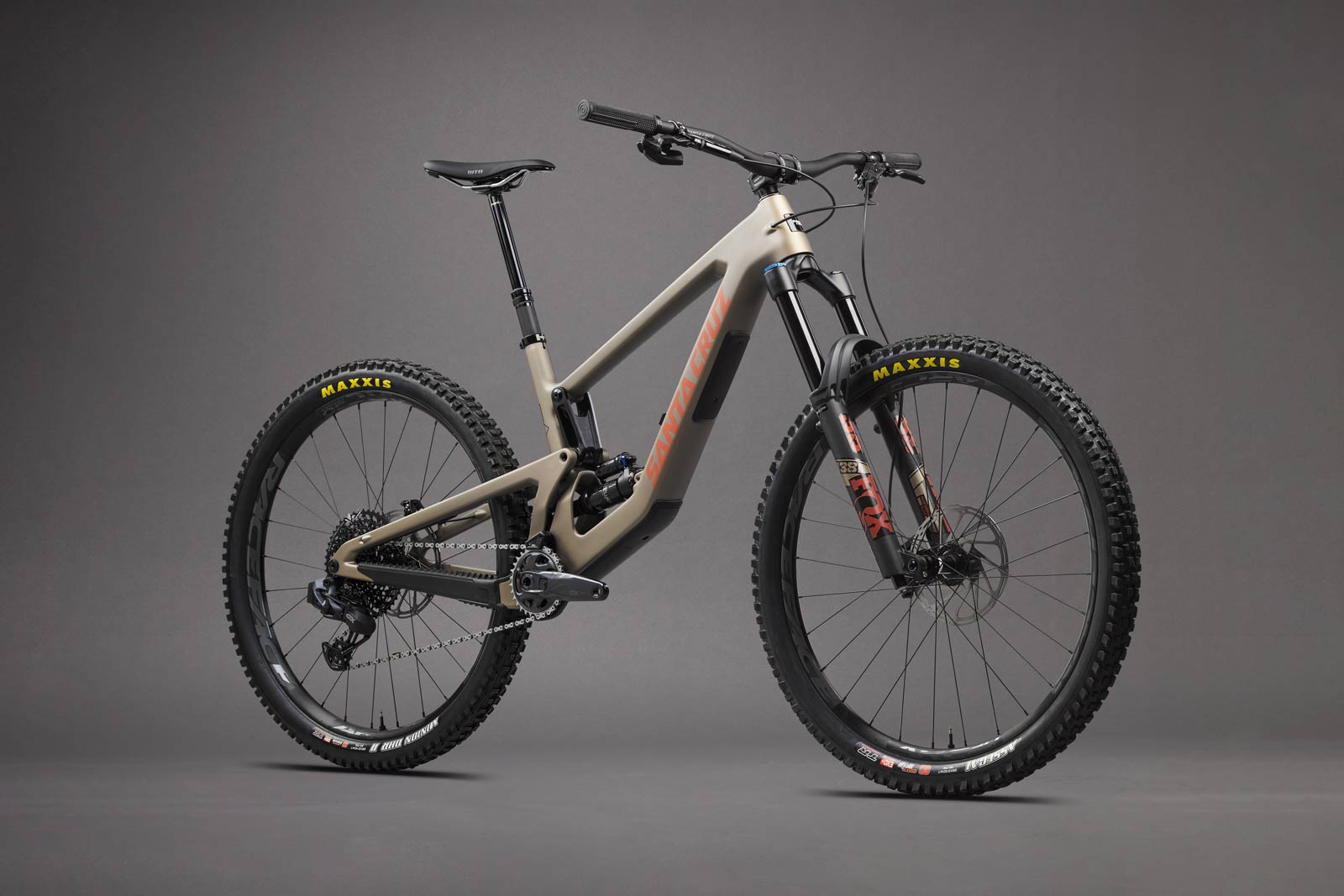 The angles quoted pertain to the frame’s low geometry position. A flip-chip at the lower shock mount can be flipped into the high position, where the head tube angle steepens up to 63.8°. That’s as a result of a higher bottom bracket, rising from 343mm to 346mm. The reach figure is concomitantly affected too, lengthening by 3mm.

While the Megatower’s rear wheel travel is boosted to 165mm, the overall leverage ratio comes down slightly to offer a more damped, controlled feel across longer travel ranges. The bike comes fitted with a 62.5mm stroke shock, though it can take a 65mm stroke to boost travel to 170mm, matching the fork travel. 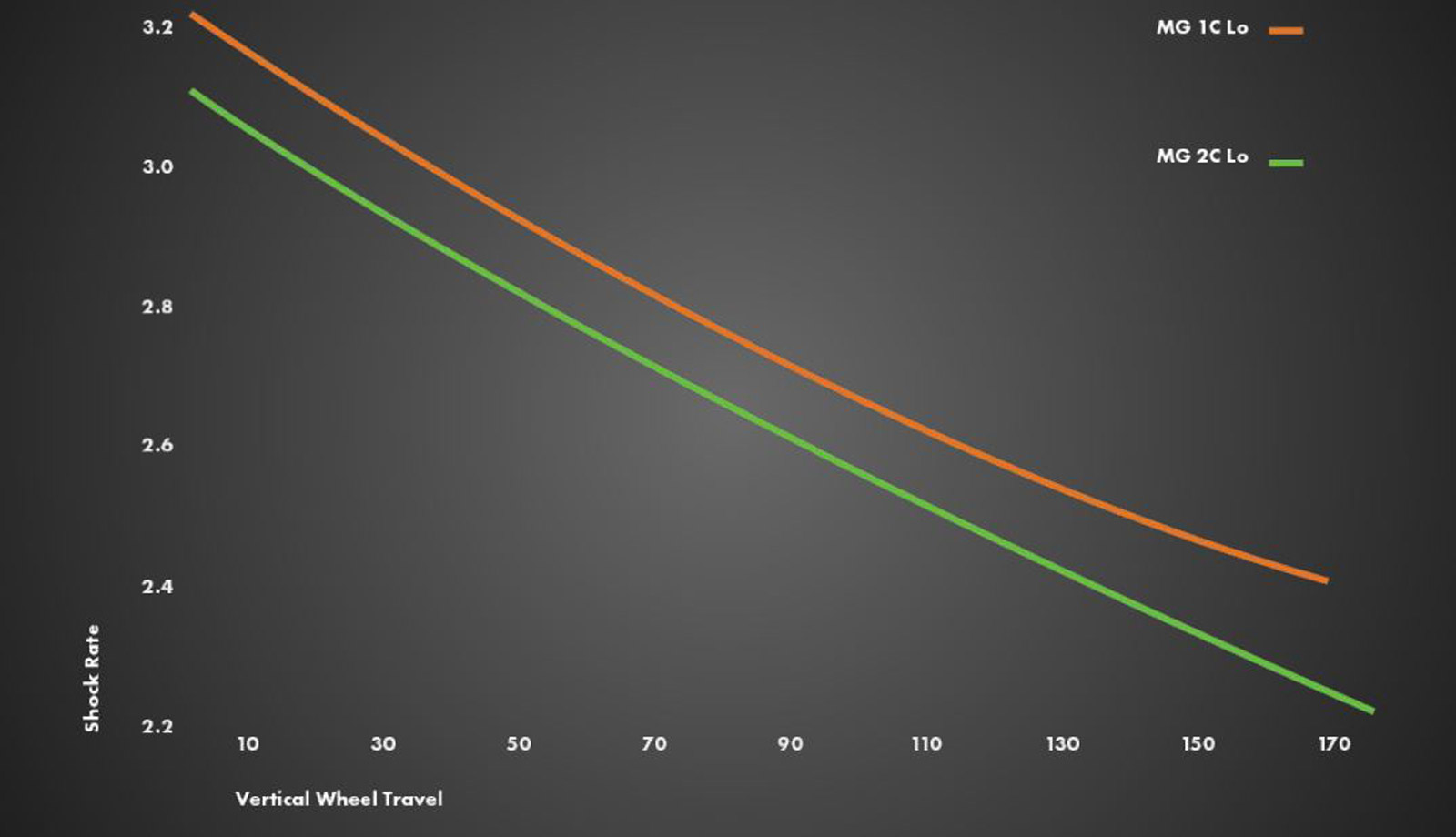 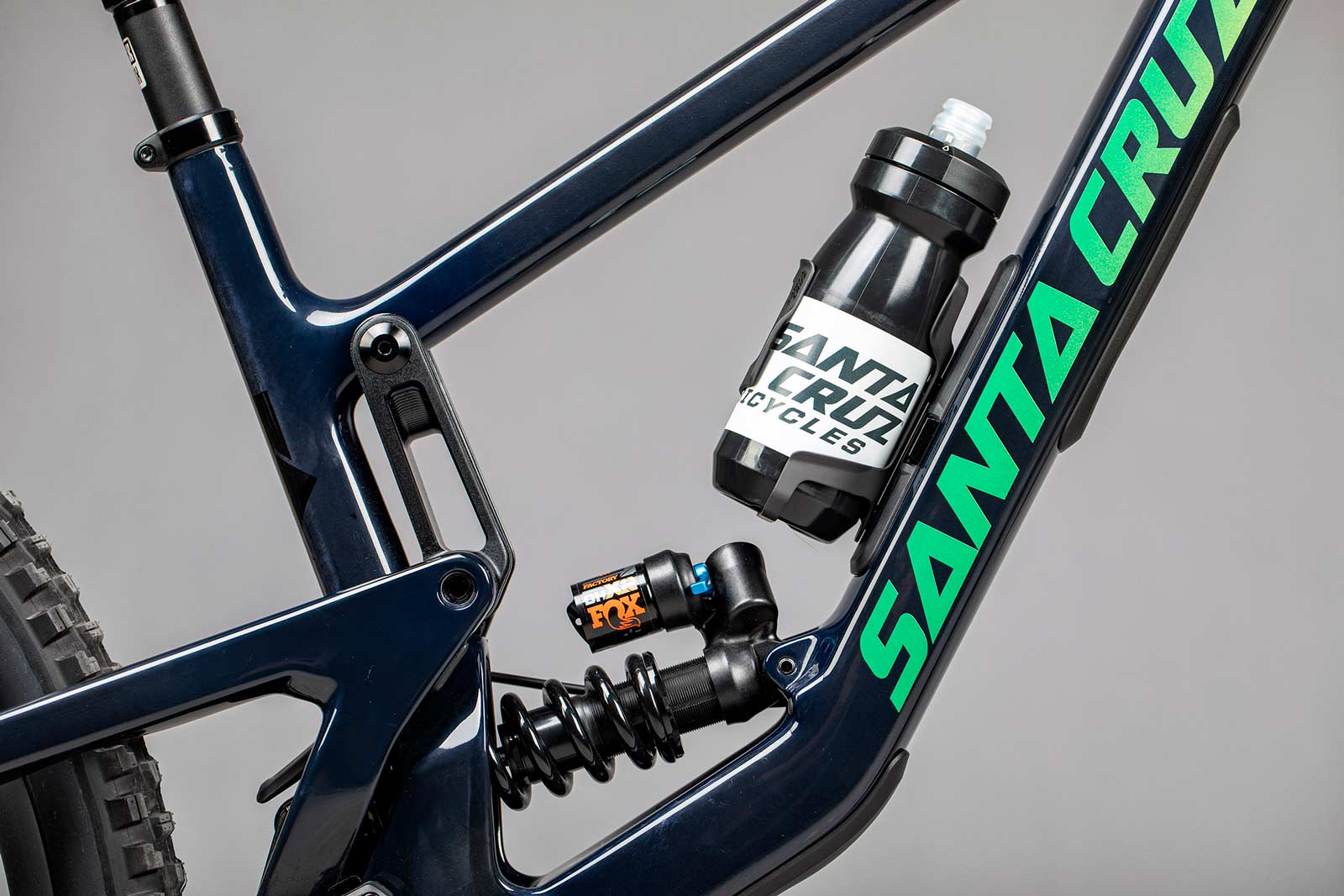 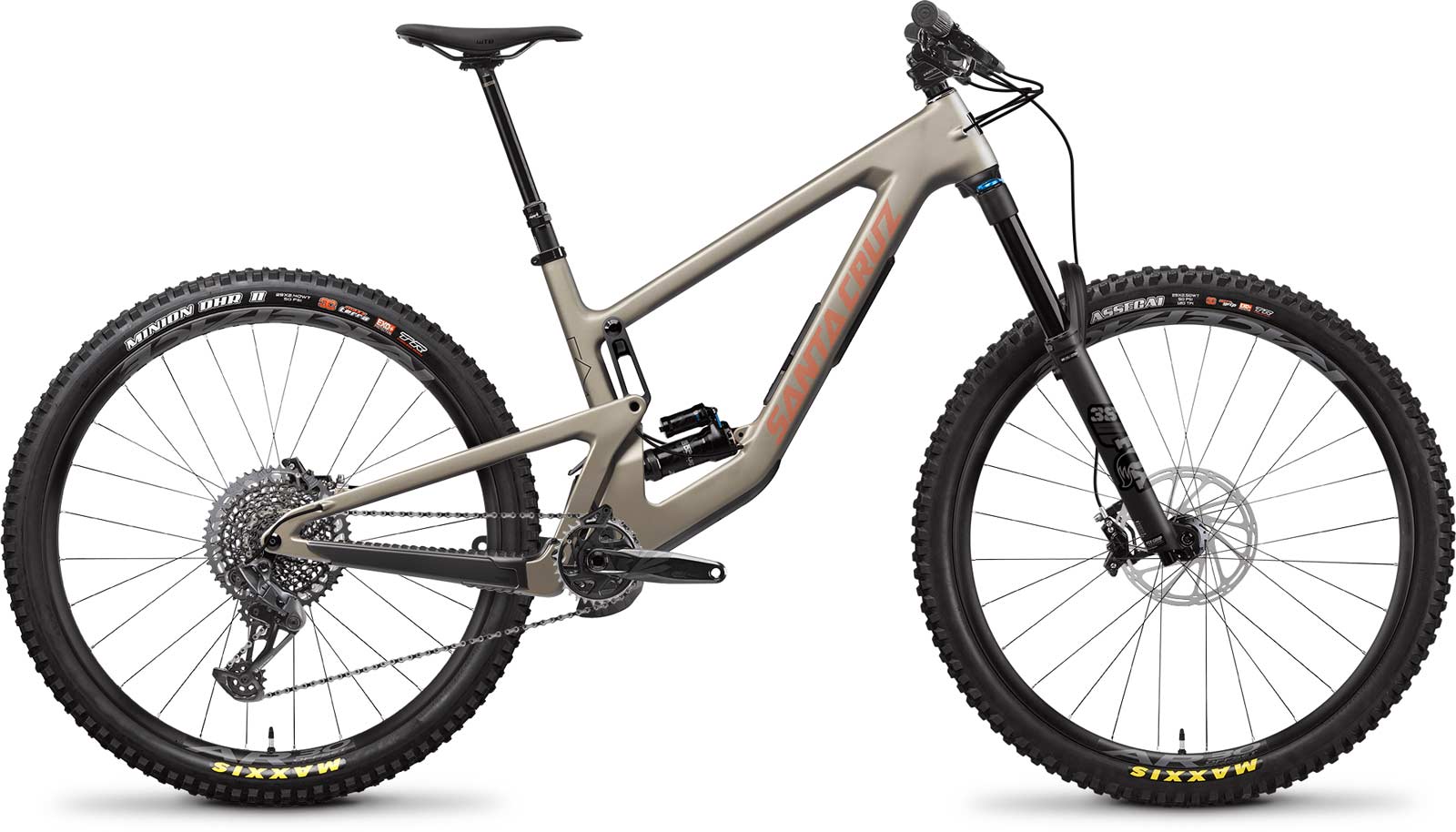 The Megatower C S model will leave you $6,799 USD out of pocket; it is upgraded with a FOX 38 Float Performance Fork, SRAM GX Eagle drivetrain and SRAM Code R Brakes. 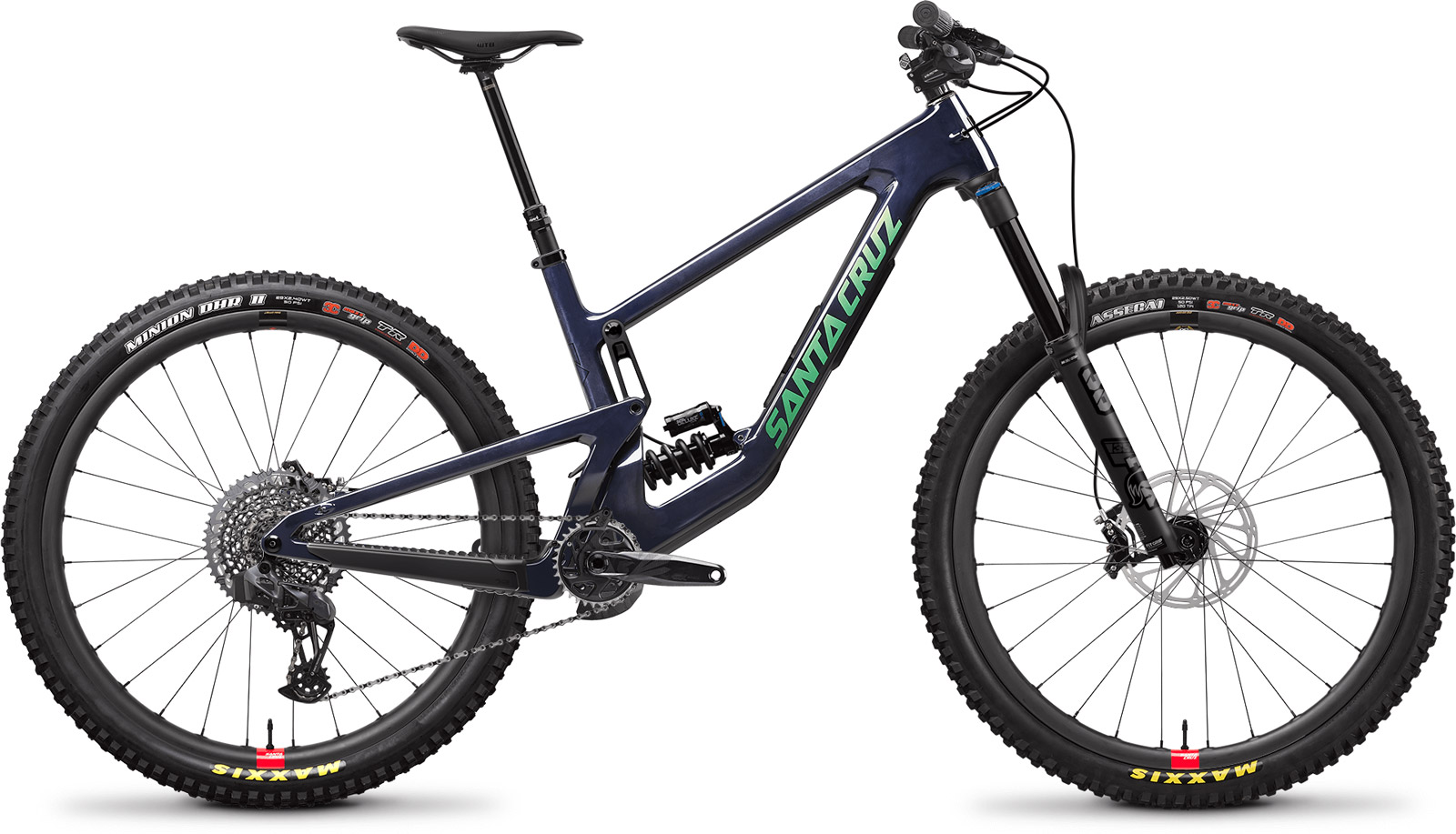 Importantly, all models benefit from 4-piston brakes with 200mm rotors, and a 29″ x 2.5″ Maxxis Assegai EXO+ MaxxGrip front tire paired with a Minion DHRII EXO+ MaxxTerra on the rear. And, as is true for their entire range of full suspension mountain bikes, the new Megatower’s bearings are covered by their lifetime warranty. For a complete breakdown of spec and pricing, head to the Santa Cruz Bicycles website.