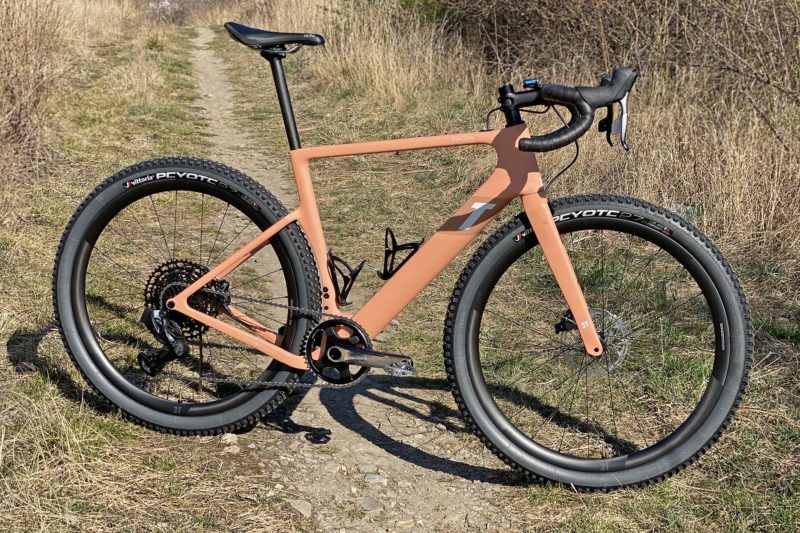 The 3T Exploro RaceMax goes to the next level with a new Ultra evolution that is more capable and more comfortable. It looks a lot like a regular RaceMax, maybe with a bit of extra room for bigger tires, but there are actually several reshaped profiles in this new carbon frame to make it more aero with wide tires. Yet, the big difference you might notice straight away is the move to a standard 27.2mm round seatpost, something that will please a lot of adventure riders… 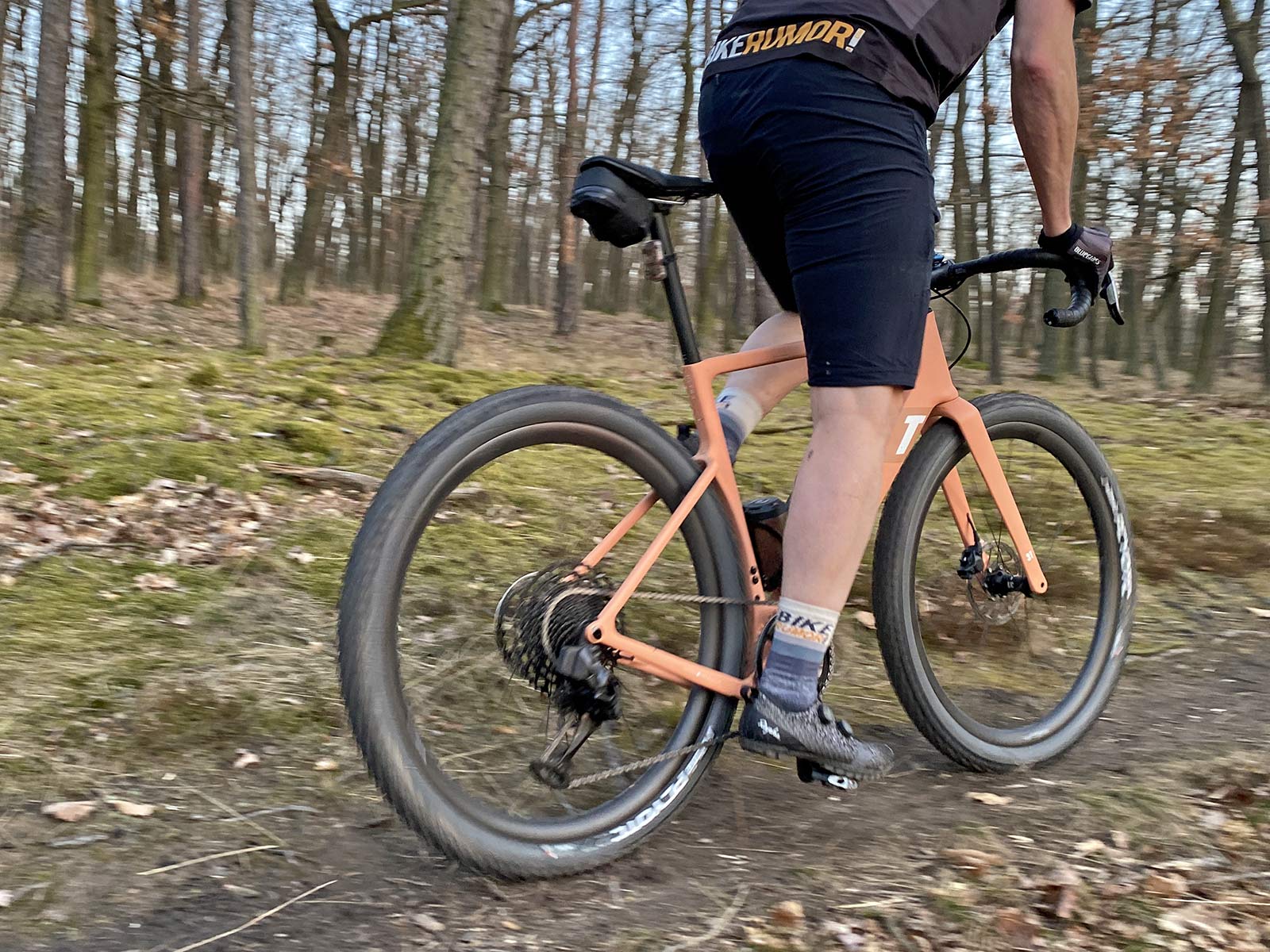 The new 3T Exploro Ultra is essentially just a wide-tire aero tweak of the Exploro RaceMax. But even though the differences are relatively minor, it’s a big enough evolution that 3T decided to give the bike a new name, while keeping the original for riders who prefer racing with narrower gravel tires. 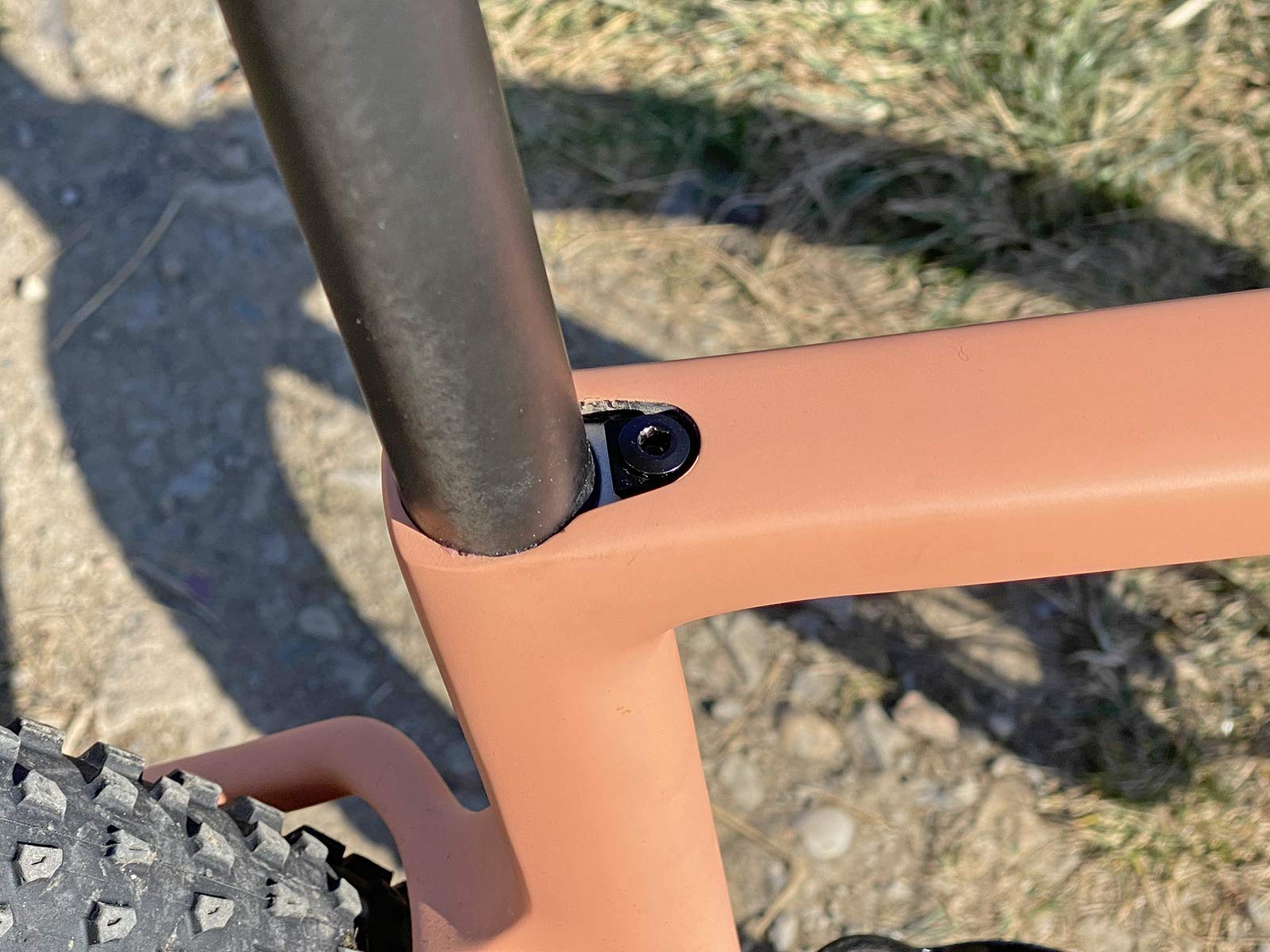 It seems almost like a minor detail, but that 27.2mm seatpost of the new 3T Exploro RaceMax Ultra is actually a huge deal for its adventure capability. In order to transition from a fast gravel racer to a proper ultra-distance bikepacking bike, the standard round post means you can easily add a dropper like the RockShox Reverb AXS (even a cable-actuated, internal routed one), a vibration-eating post like the Ergon VCLS, a full-on suspension seatpost like the Redshift or eeSilk, or even just a more secure fit with any saddle pack bikepacking bag out there. 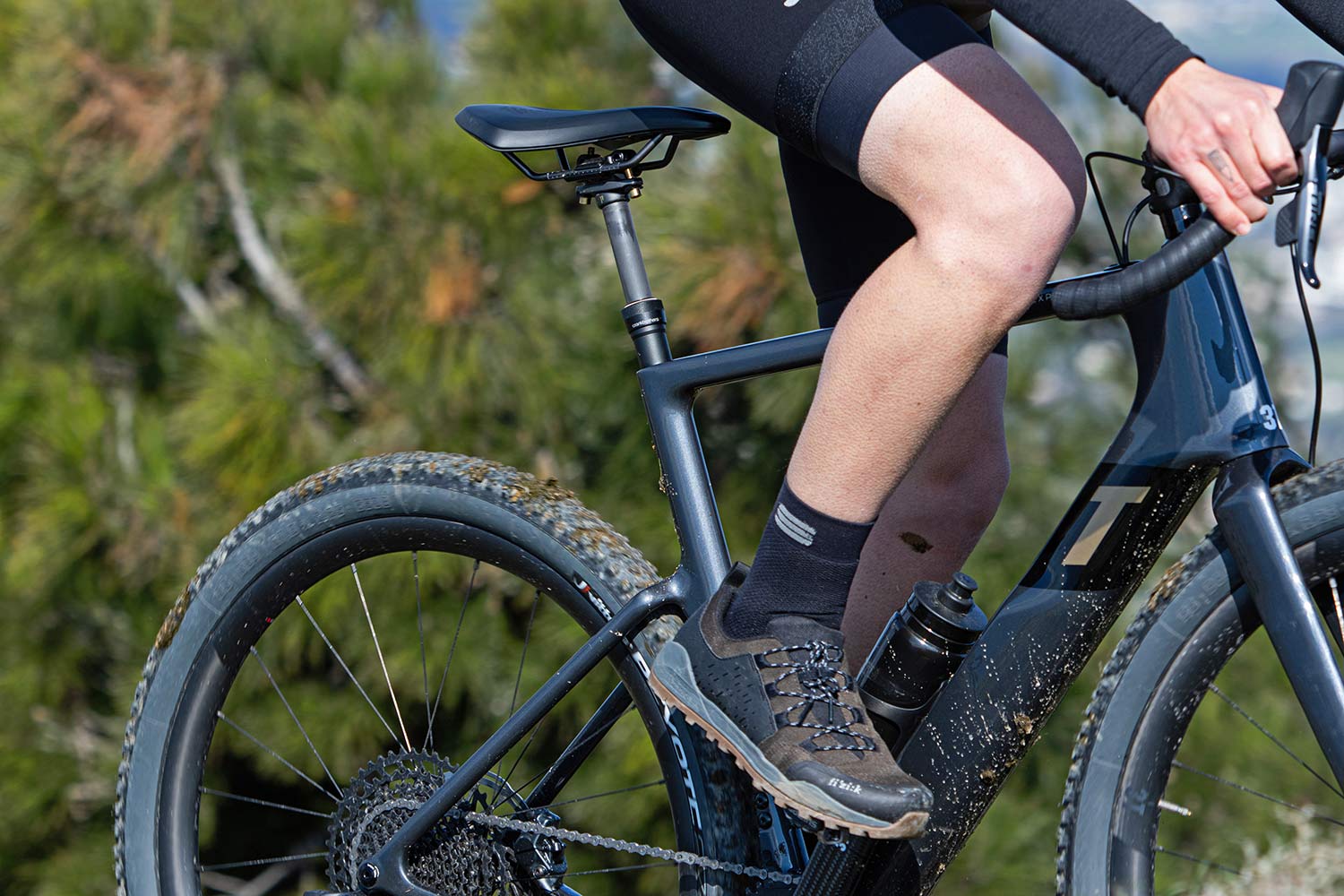 In fact, 3T offers a complete build with a CrankBrothers Highline dropper post. 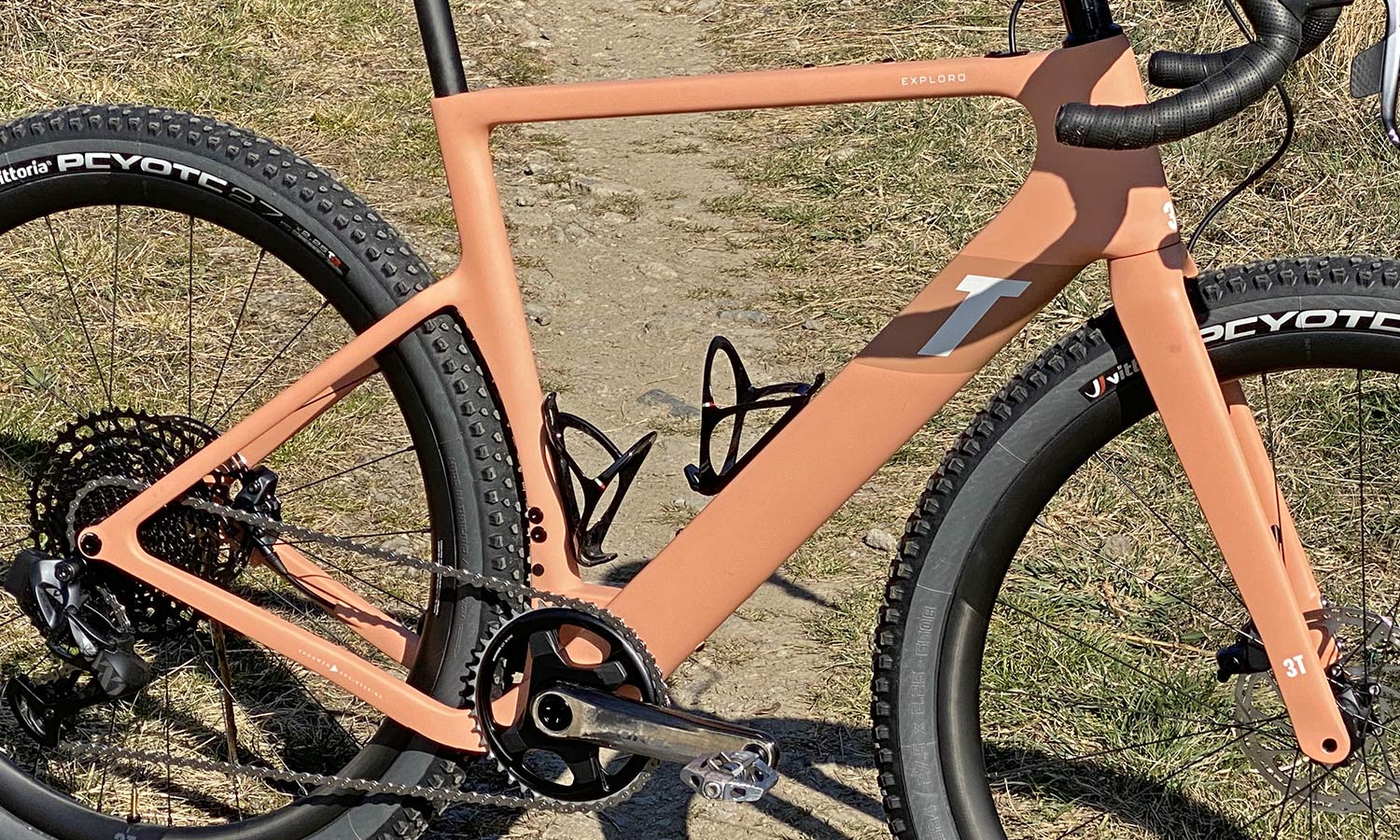 Much of what redefined the Exploro RaceMax over the original and more versatile Exploro was a tightening of usable tire range. The RaceMax didn’t reduce tire clearance per se, rather it put a lot of focus on optimizing the bike for REAL gravel tire sizes, even defining a couple of useful new terms – RAM & WAM. 3T says that narrowing of applicable tire range was about getting the most out of wider gravel tire aerodynamics, as well as giving buyers a better idea of what tires were the best fit for their new bike.

The Exploro Race’s tire sweetspot was around 700x35mm, while the Max targeted 27.5 x 2.1″ (~55mm) tires, but the aerodynamics of their shared frame were optimized for 35-42mm tires. Those riders on the Max setups were losing out a bit on the aero benefits. 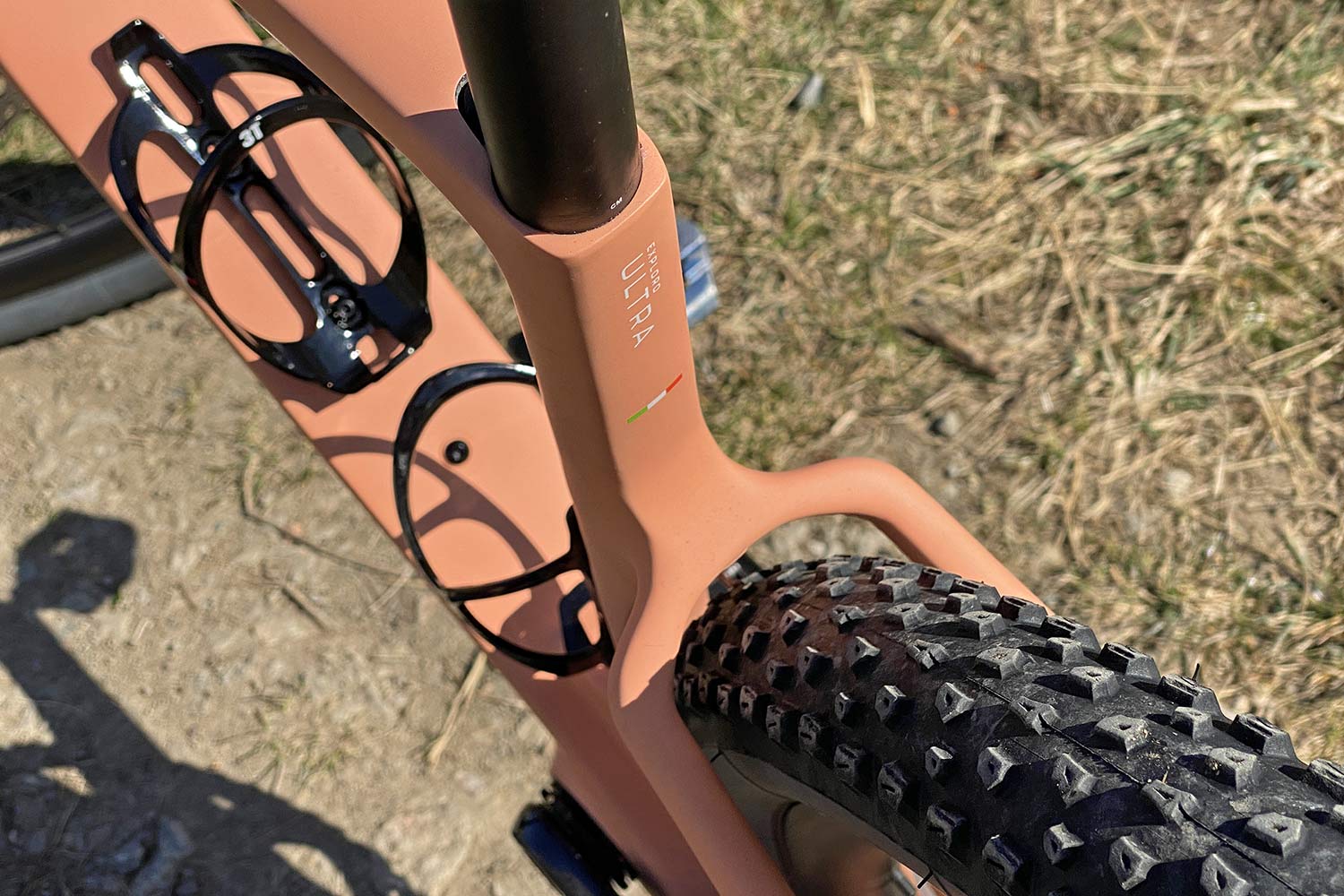 Now, the new Exploro Ultra’s aerodynamics have been designed around bigger 55-61mm wide tires (on 650b wheels), like these 2.25″ Vittoria Peyotes. 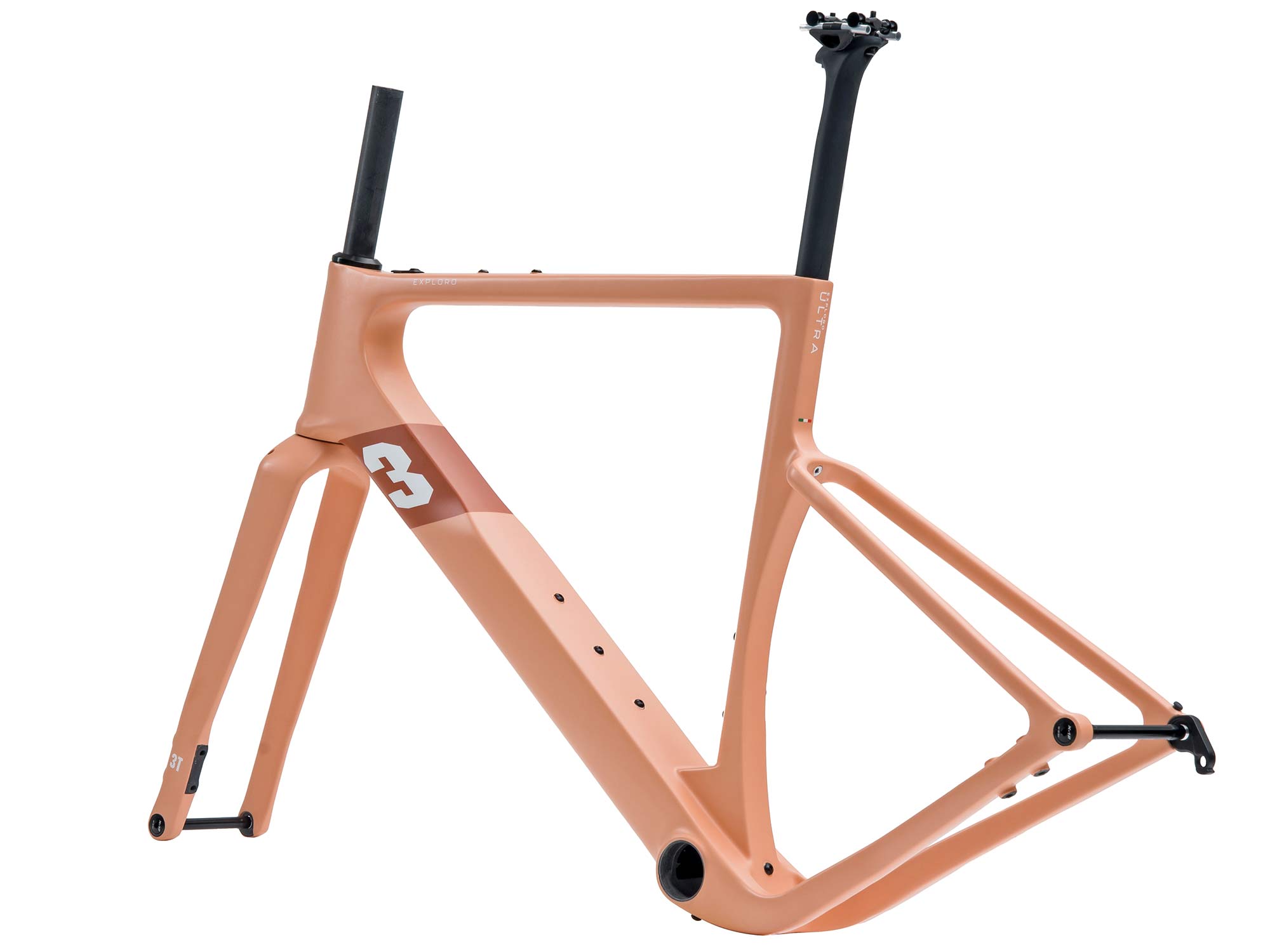 The big difference is in the bike’s giant downtube, the Ultra frame gets even wider up top. It now expands to a whopping 60mm wide in the upper section of the downtube, where air transitions off the spinning front wheel and joins airflow over the fork crown (vs. 50mm for this ‘upper neck’ on the already wide RaceMax). The lower portion of the downtube is still 75mm wide, designed to smooth airflow over your water bottles. 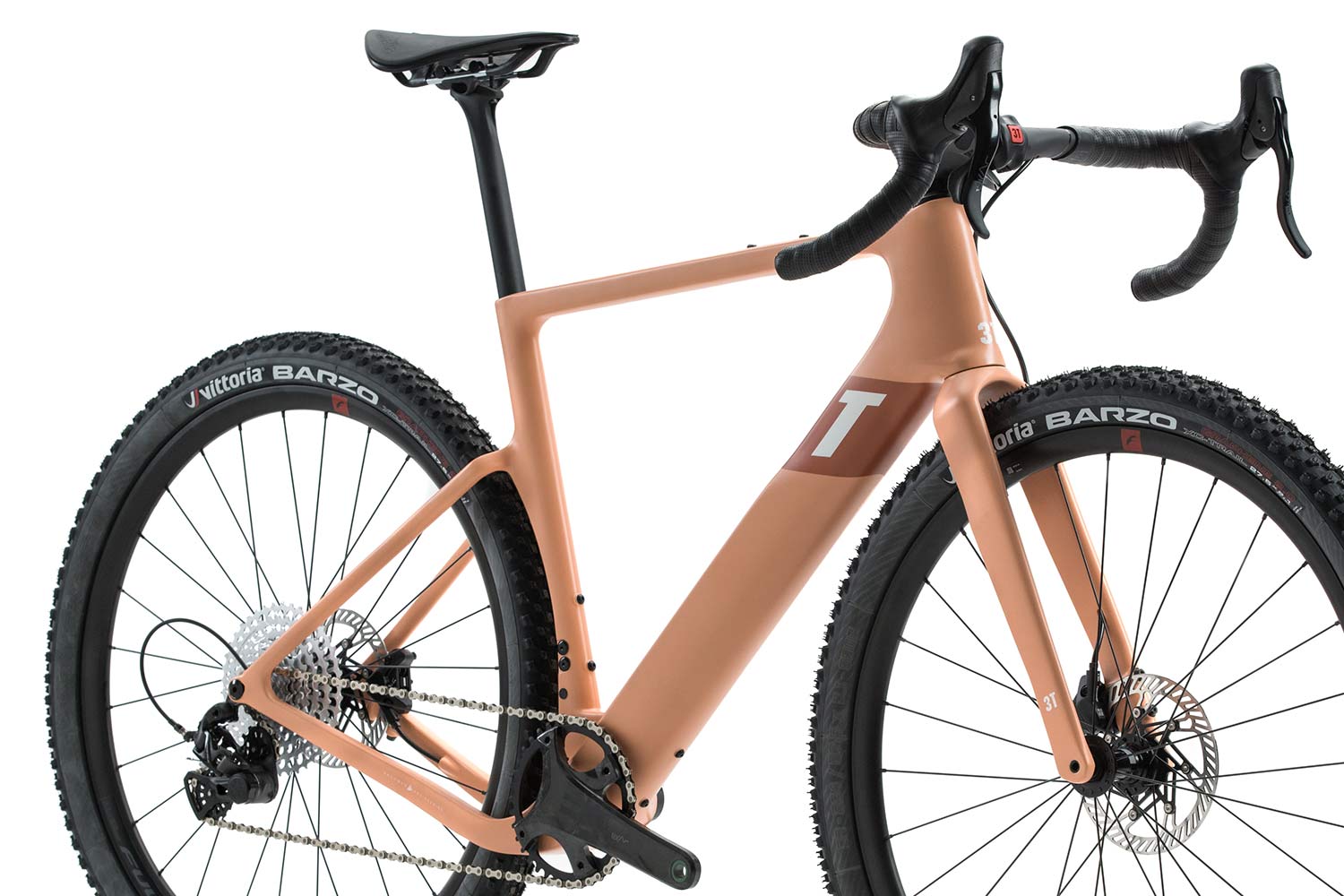 3T is still a bit vague on some of the details on the new Exploro Ultra, but there does appear to be a few extra millimeters of tire clearance front & rear. They don’t claim bigger clearance than the same 650 x 61mm (27.5 x 2.4″!) of the Exploro Max, but it seems safer to say there is more room for mud at those biggest tires here. That seems to have happened with a slightly revised fork crown, a deep/thinner rear wheel cutout, and slightly longer chainstays. 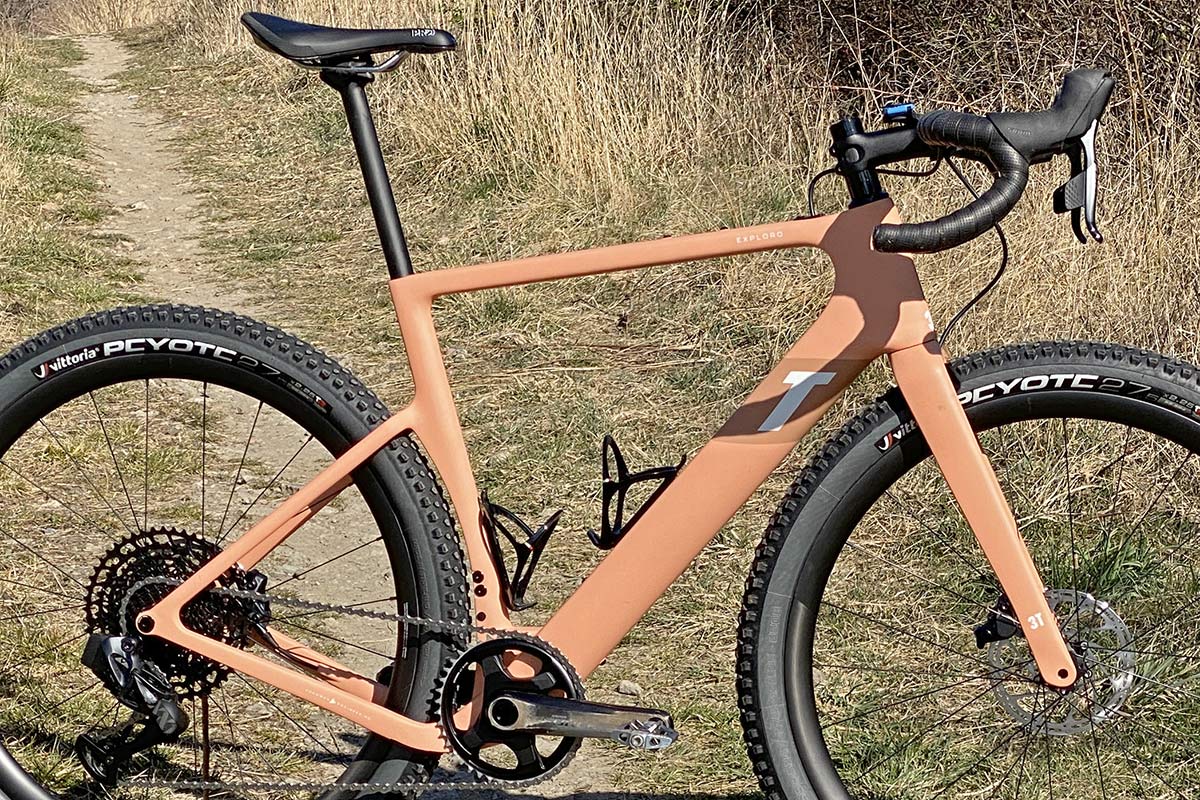 The cutout is a bit hard to be sure without having the two models side-by-side, since the big tires on 3T’s wide Discus i28 LTD simply make the frame tubes look extra tiny.

The 4mm longer chainstays 419mm chainstays are still quite short, and don’t seem to correspond to overall wheelbase growth which generally stays the same across most frame sizes.

The Ultra comes in the same six size range as the RaceMax (XXS-XL) with the same frame Stack figures, but generally 4-5mm less Reach to balance the longer rear center. There are a few minor head angle tweaks at the large & small ends of the spectrum, but overall fit and geometry is effectively unchanged. 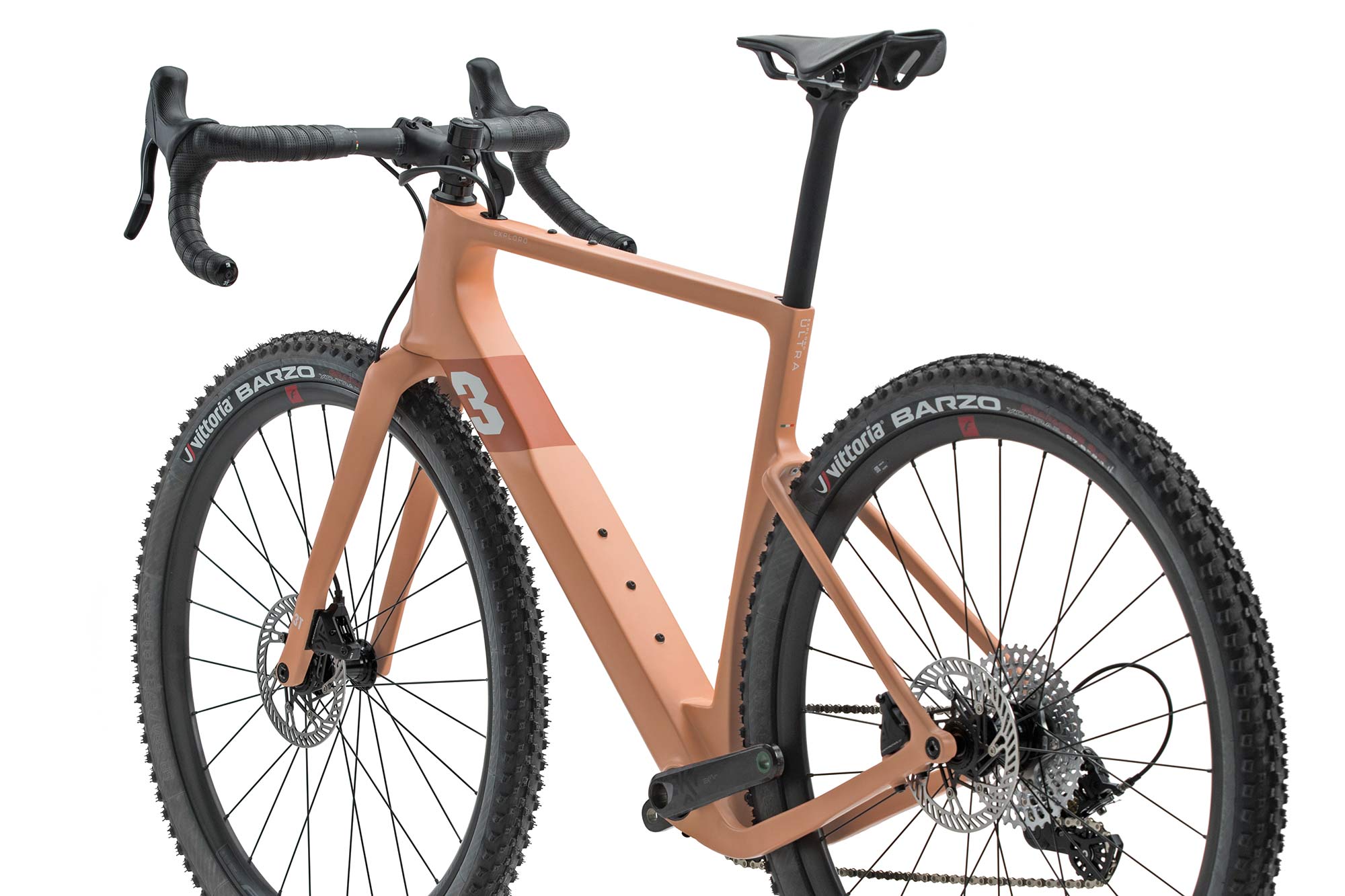 Outside of the bigger downtube and 27.2 post, the new wide-aero Exploro Ultra shares pretty much all other tech details with the 2020 Exploro RaceMax. The new bike is also a mid-tier hi-mod mix carbon spec made-in-Taiwan like the RaceMax, not the ultra-premium made-in-Italy carbon of the RaceMax Italia. 3T hasn’t shared a frame weight claim yet, but it’s likely in the same 1050g range of the RaceMax. 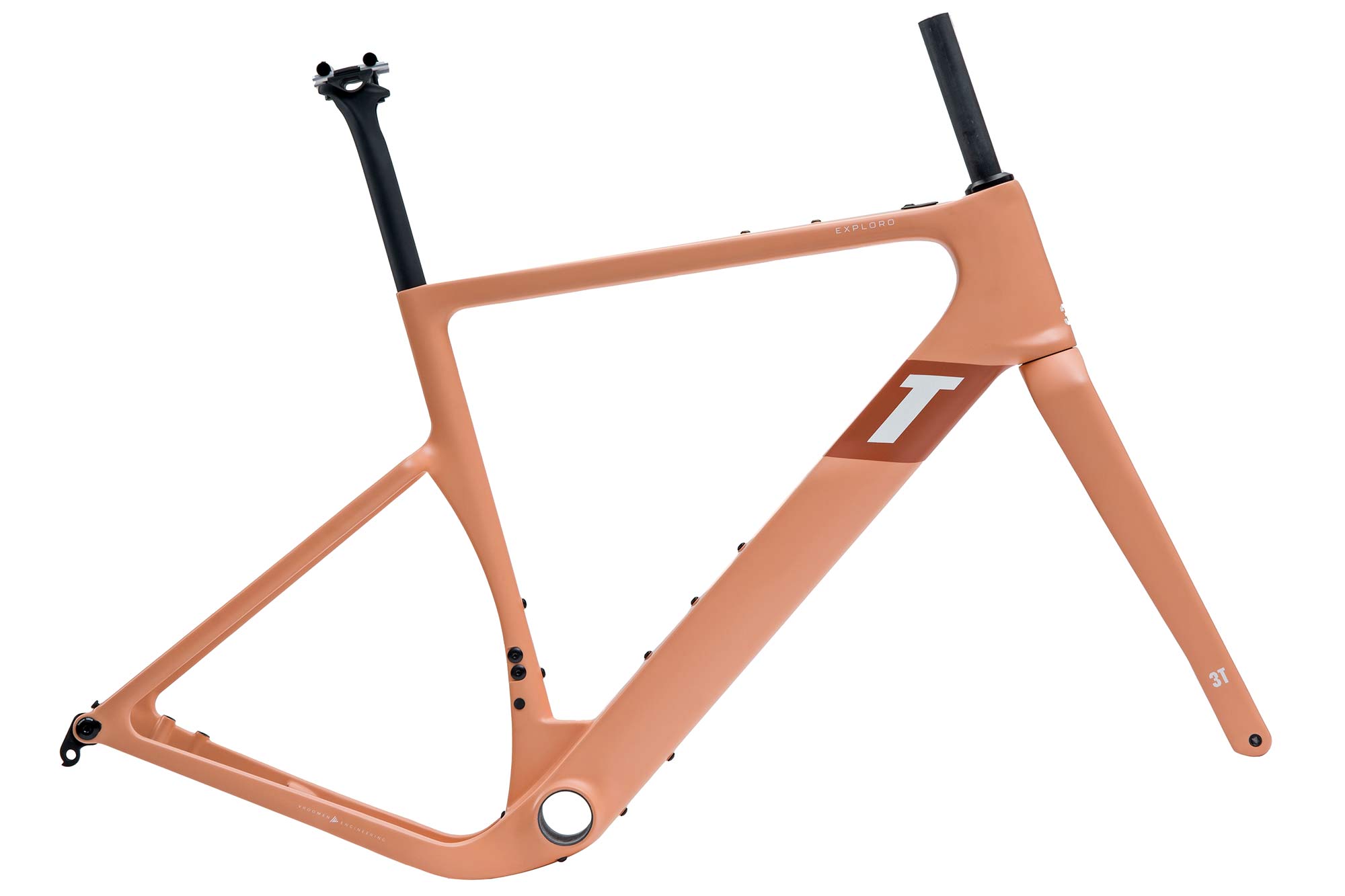 Downtube depth (not width) changes with each frame size for consistent front-end stiffness throughout, and three different fork offsets are there to give consistent handling even as head angles vary by a full 4° from XXS-XL. The frame sticks with the double dropped chainstay design 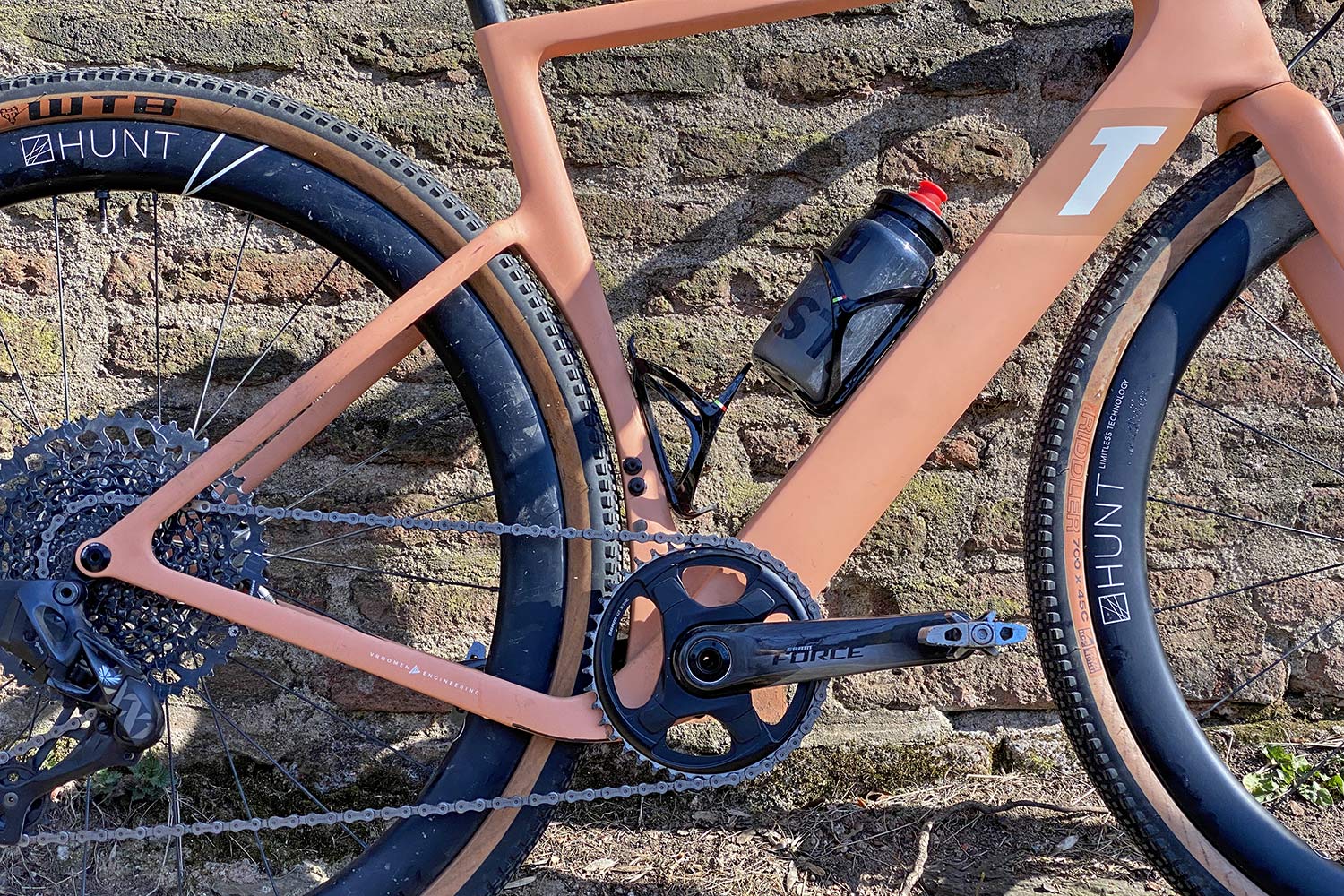 The Ultra has four pairs of cage mounts (but no fork mounts) – one under the downtube, direct mounts on the toptube, two inside the main triangle with a 2-position option/3-pack Anything mount on the downtube to optimize aerodynamics with a single bottle. 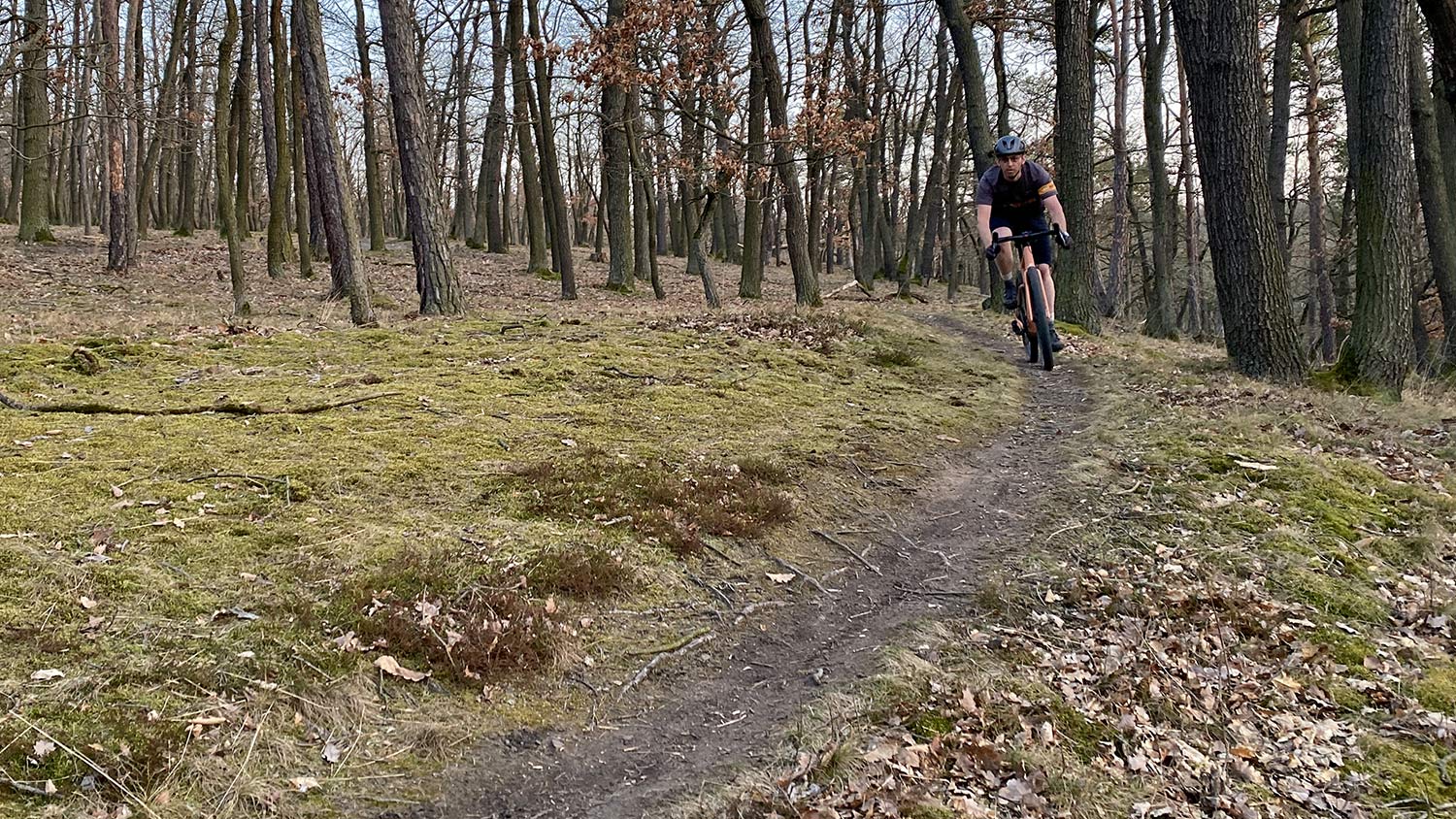 I’ve only had the new ultra for a few weeks, but I’ve ridden it in a few different configurations, from rough gravel to smooth singletrack and even a bit of light bikepacking. Based on the bigger downtube, it’s most likely not quite as aero as the original RaceMax with smaller tires. But with improved comfort and versatility, I’m pretty sure it’s my favorite Exploro yet. 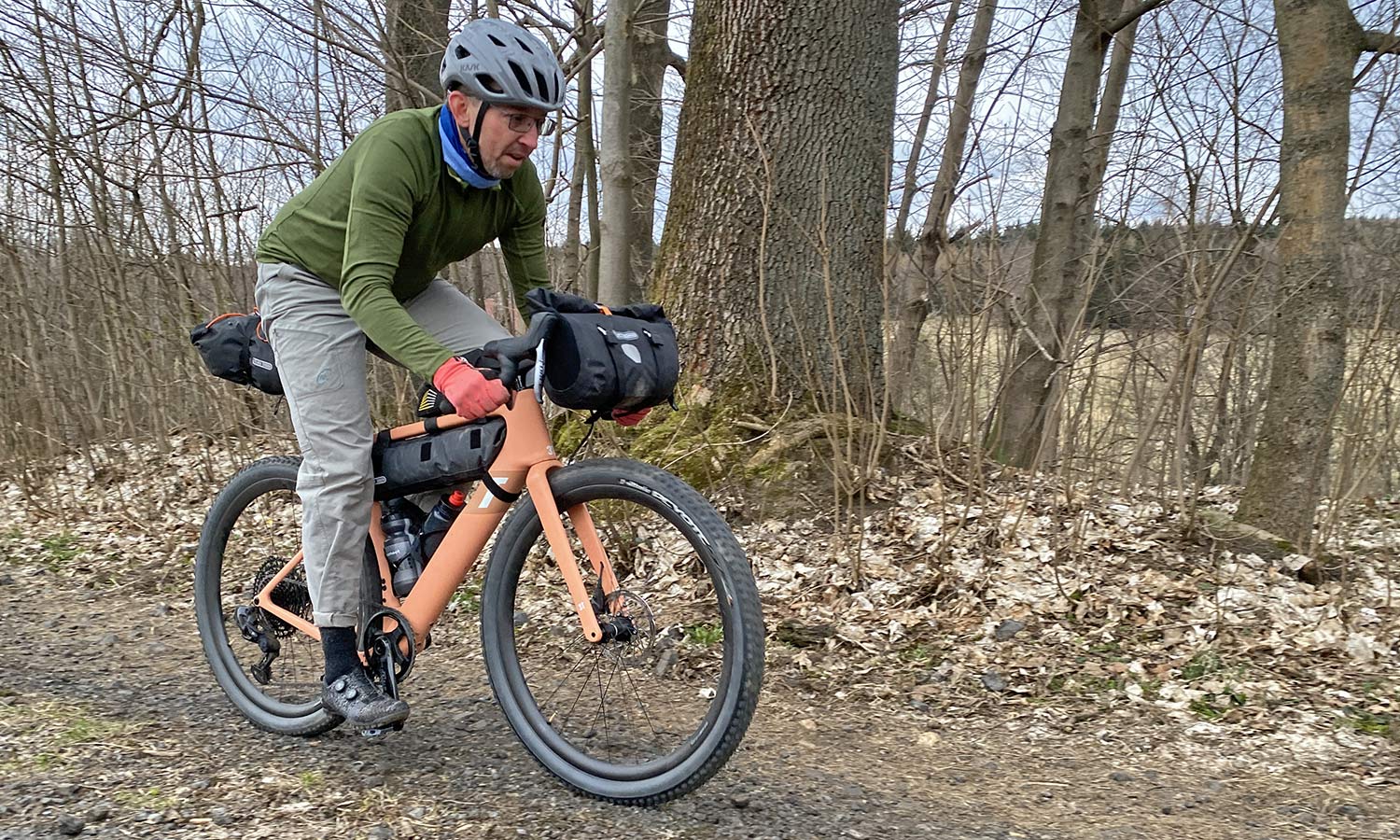 Check out my full First Rides Review for more detail… 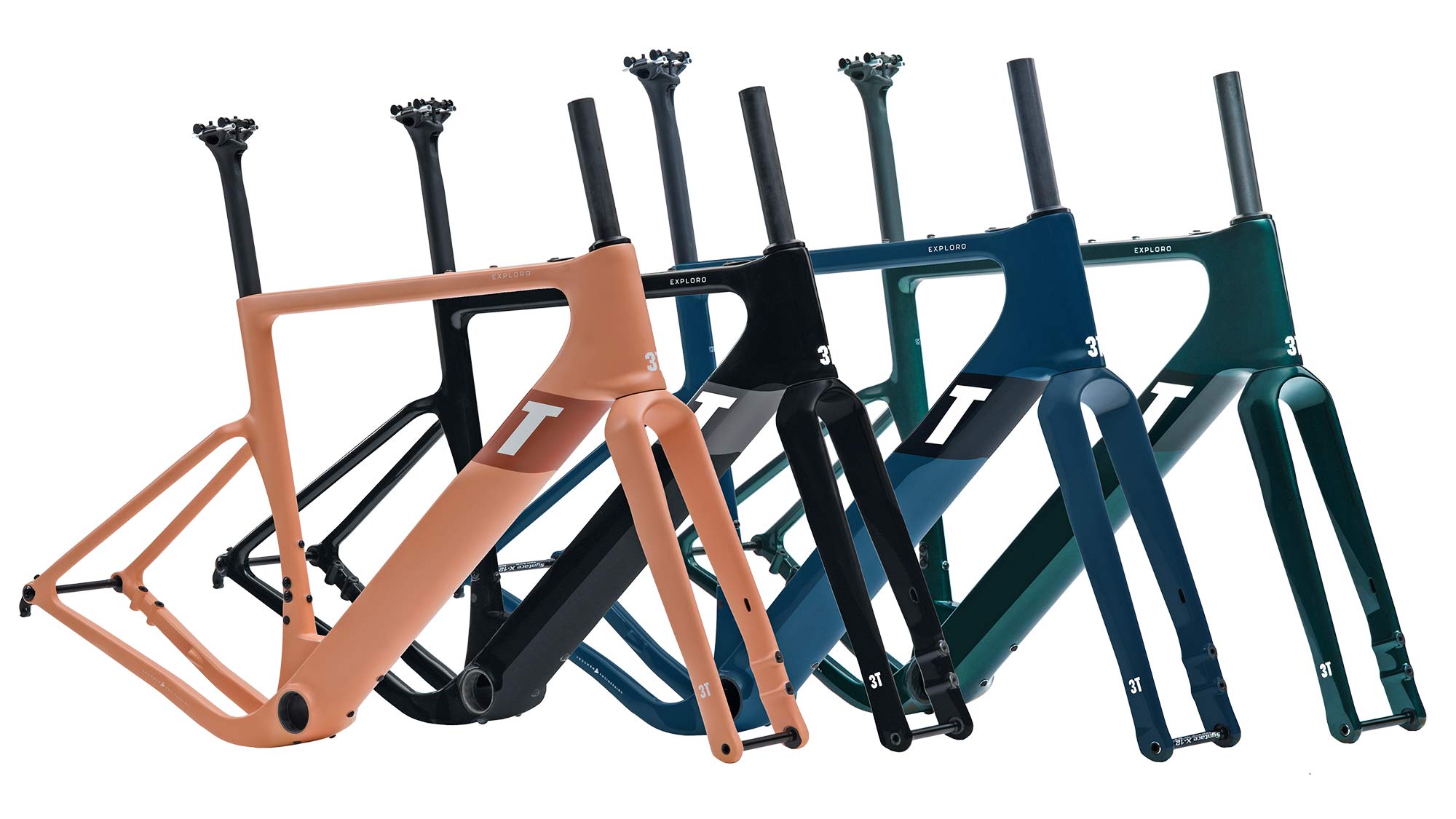 Starting today, 3T says the new Exploro Ultra will be available as both a frameset, or as complete bike builds.

3T Exploro Ultra framesets including headset & 0-offset carbon post sell for $3099 / 3099€ in either muted Copper (available now), Black Glossy (available in May), Steel Blue & Racing Green (both available from June). A primered RTP ready-to-paint Ultra frameset will sell for $2899€ and will be in stock in the next week or two. 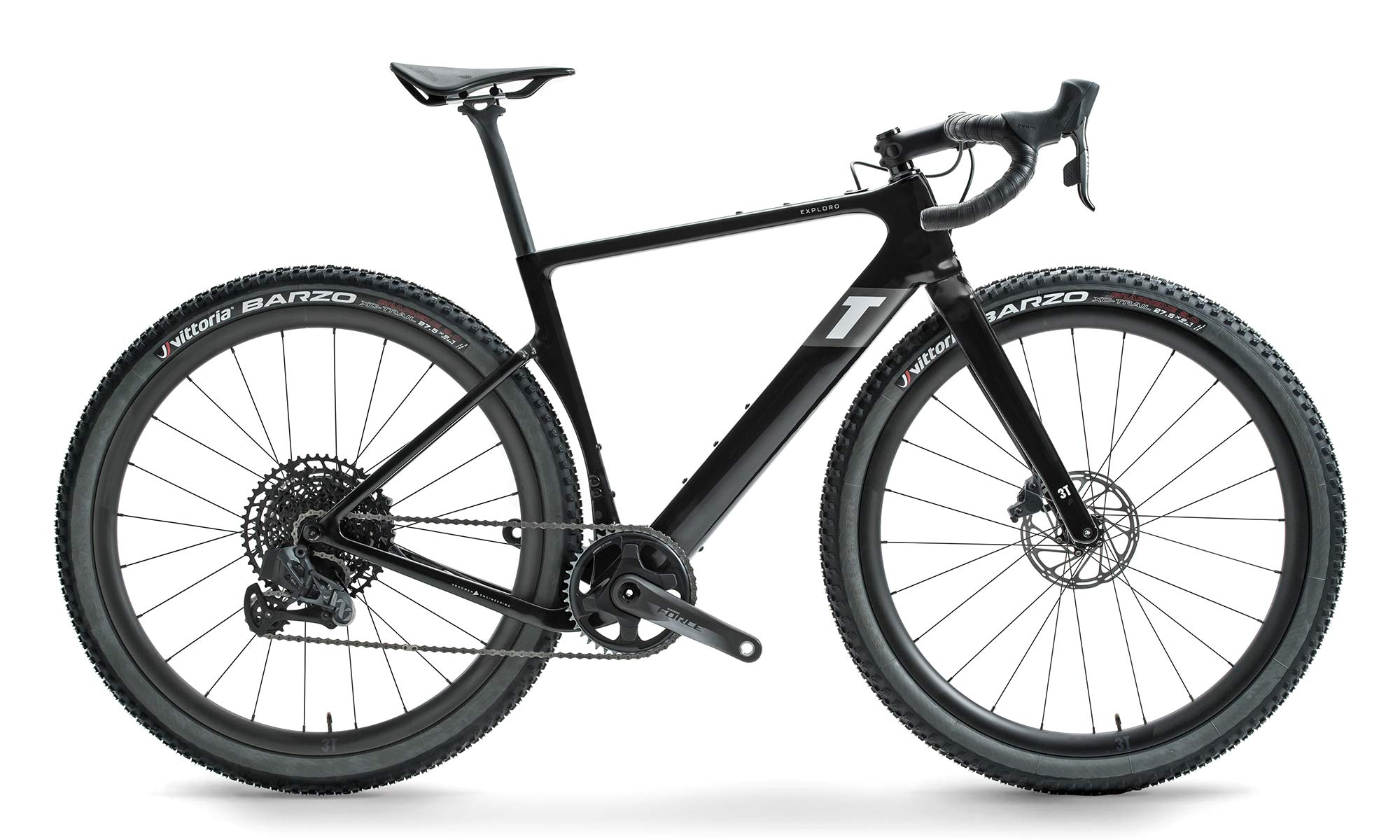 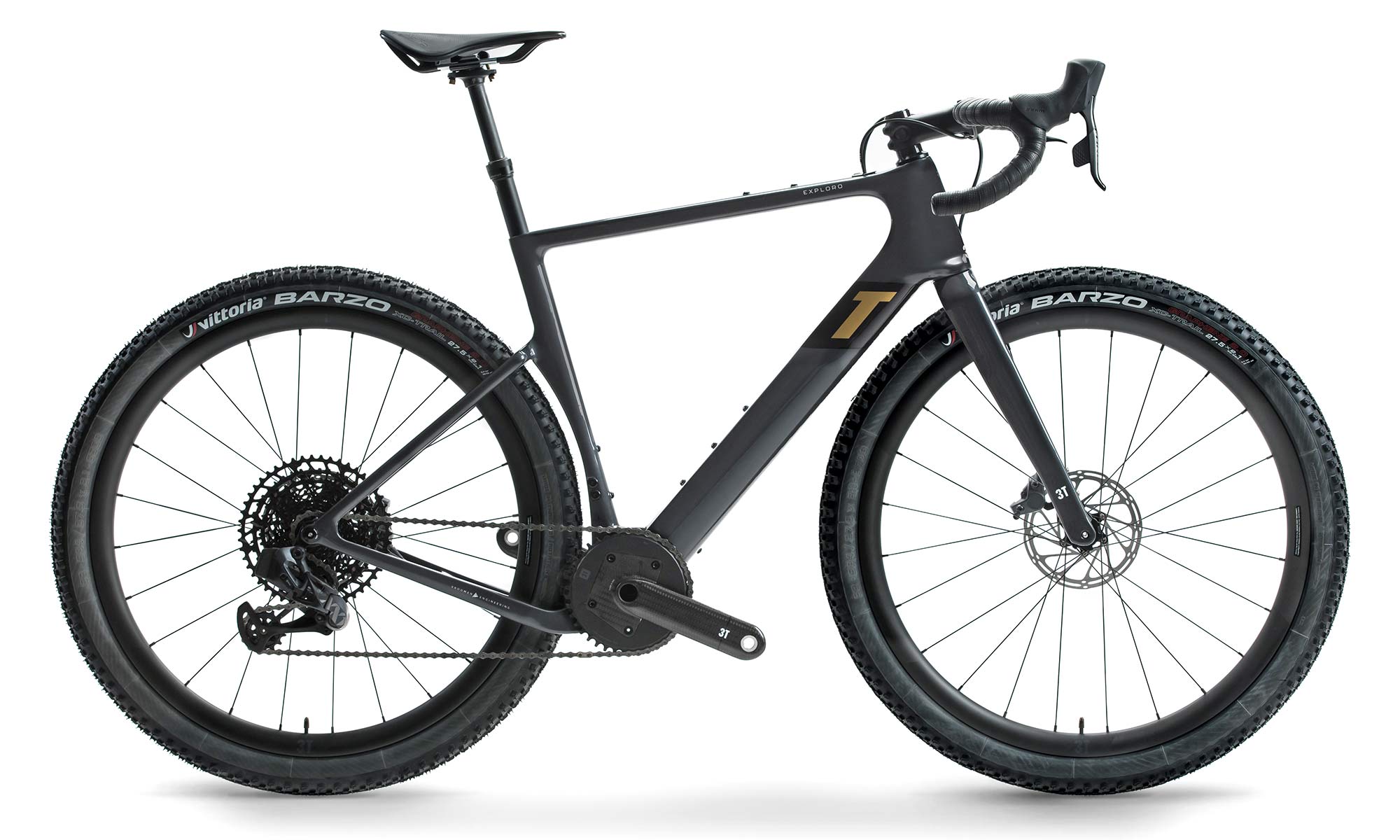 Lastly, a more off-road-ready CrankBrothers Edition will combine the wide range SRAM AXS Mullet groupset with a Highline dropper post, a carbon 3T Torno crankset, and 3T’s wide carbon Discus Plus i28 LTD 650b wheels, for $8199 / 8199€ available from September. 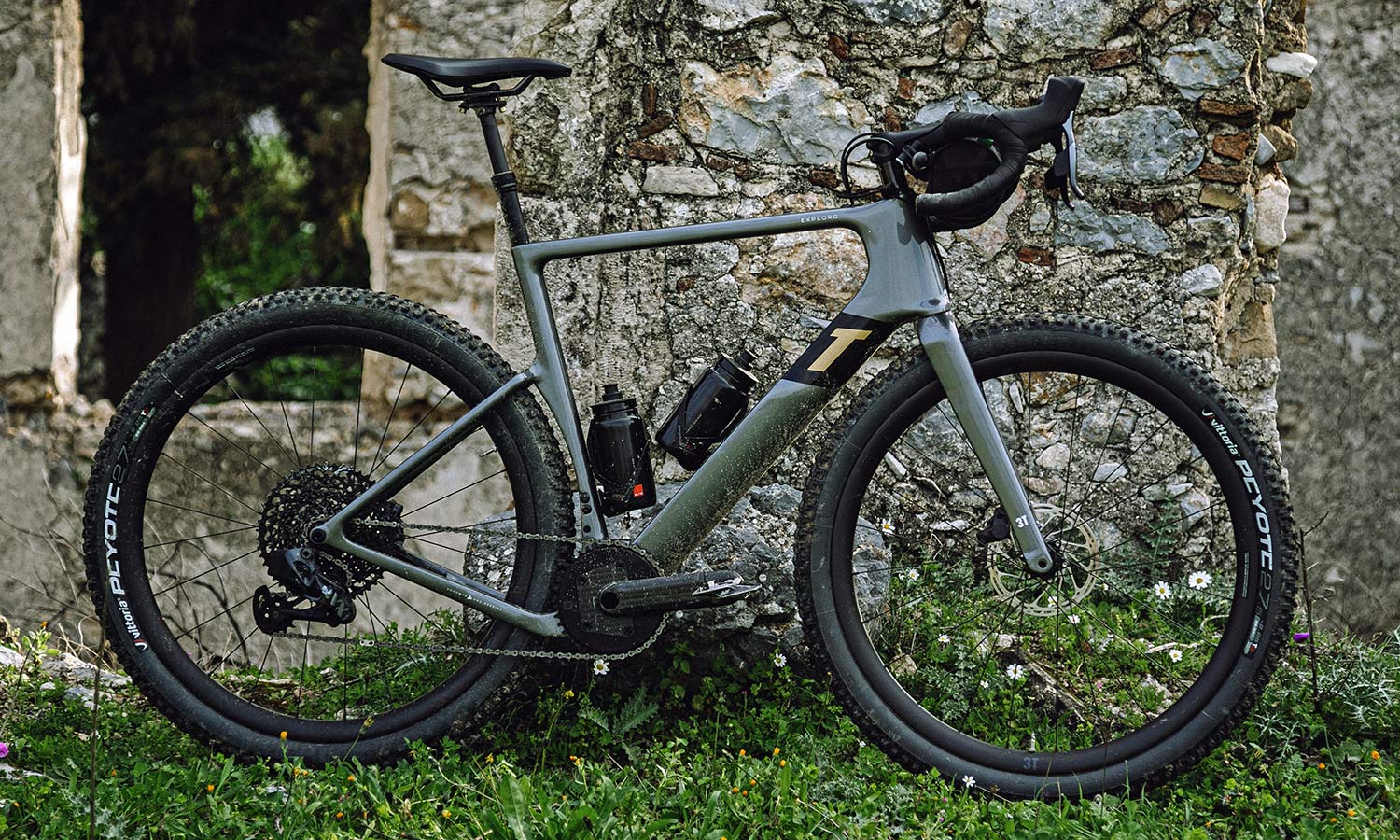 What’s up with the seat binder adjustment access hole? It looks like it was created by a guy with a file. Really badly finished. No cover or anything to keep dirt out?

This plus whatever the cables are doing up front really rustles my jimmies.

Came here to say the same thing. That’s garbage level finishing on a $3100 frame. A friend bought an Exploro frameset last year and I was really surprised at how poorly it was made. The BB shell was 0.015” out of round.

I think the sweet spot for Vroomen’s drop-bar bikes (Open and 3T) is racing. Carbon just isn’t durable enough for bikepacking. And if he won’t put bottle mounts on the fork he’s going to lose a lot of sales.

I don’t get why carbon would be any less durable than any other material for bike packing. So long as the bike is being used in the kind of terrain a gravel bike is good for there shouldn’t be an issue. I’ve done a few bikepacking trips on my carbon gravel bike and performed very well.

I did like carrying load on the fork legs (Salsa Anything cages + 8L dry bags). Really makes the bike ride stable and is more manageable.

Well, accidents happen. When you fall over on a rock-strewn trail and the top tube hits a boulder, it will crack. Carbon frames are brittle – they don’t dent.

You are describing technical mountain biking, not gravel riding. While more heavily built, carbon MTB’s have delivered good durability in those conditions for many years. Carbon fiber isn’t glass. It doesn’t fly apart if damaged. An impact that would damage a carbon tube would also badly dent/damage an aluminum tube.

The short travel XPLR does

I hope that one also comes in flesh tones.

Very true @Michal, thanks for catching that. I swapped a few tires around in my short time with the bike and mixed up which were which.
All 27.5 photos show 2.25″ Vittoria Peyote tires.