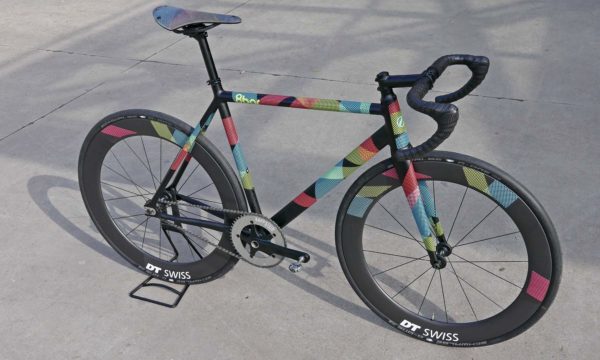 Berlin’s 8bar bikes had plenty to show at BFS. New Team Edition graphics are what drew us in, but their new fat-tired Tmplhof fixed gear crit bike was the real highlight, including its matching DT wheels & Brooks saddle. Beyond the bike itself, were some trick prototype aero hoods, and a range of team edition cycling kit. 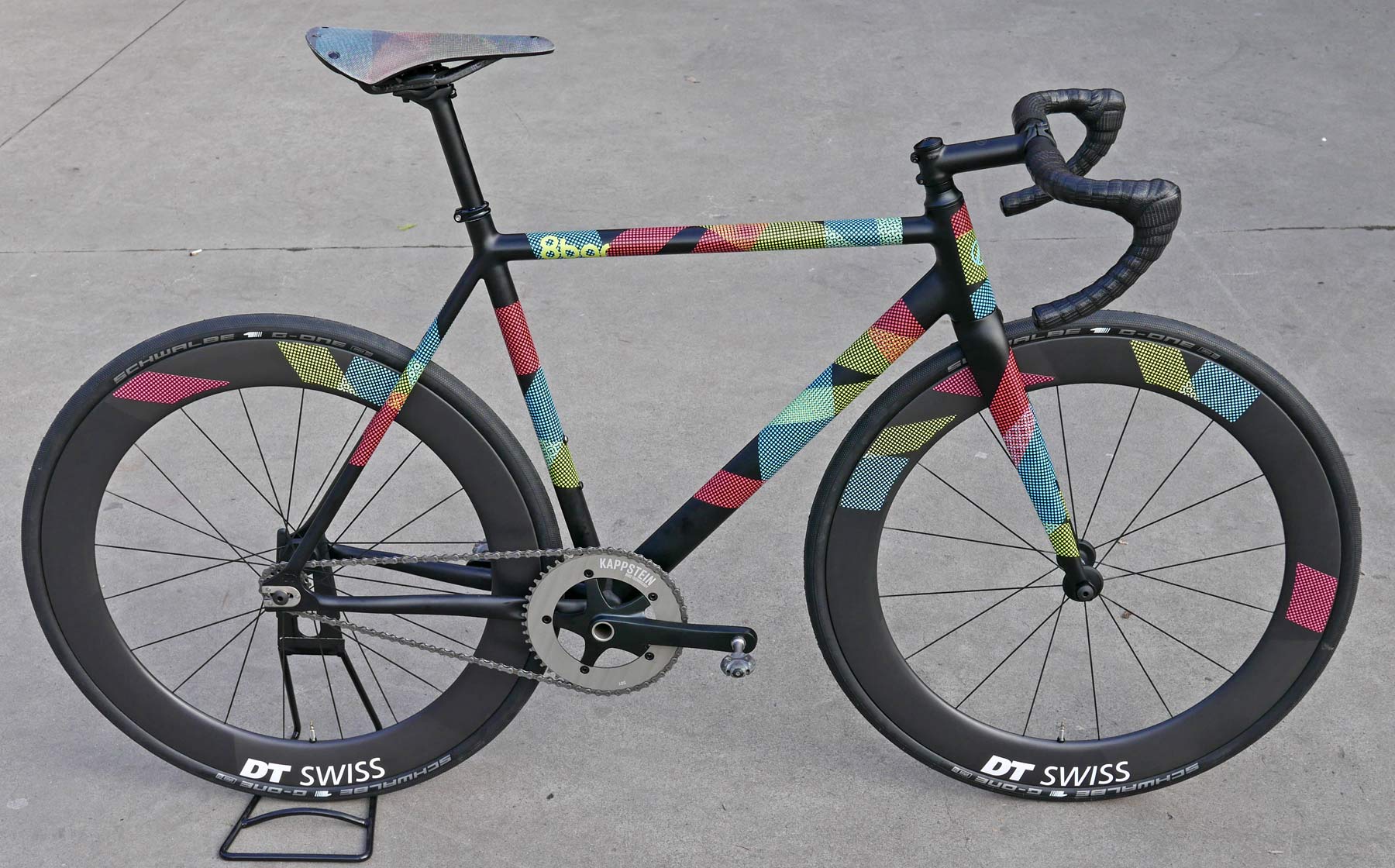 The Tmplhof is 8bar’s all new aluminum crit racer and all around urban fixie, developed for their fixed gear crit team based on the sixth iteration of their previous Krzberg race bike. The new Tmplhof gets a slightly rear sloping toptube vs. the Krzberg’s forward sloping ‘low-pro’ which allowed 8bar to lighten the triple butted 6066 alloy frame while retaining race-ready geometry. 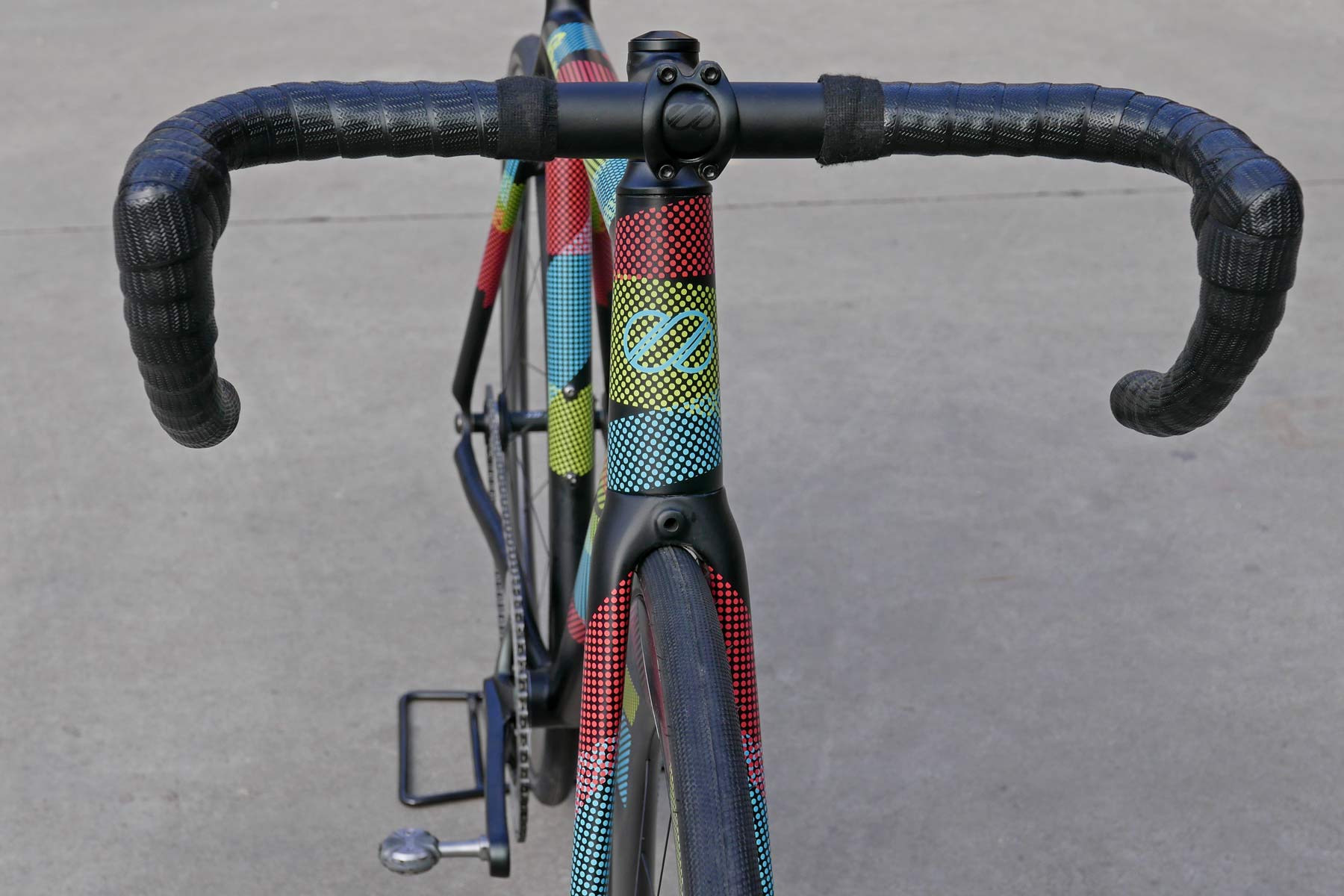 The new bike keeps a full carbon tapered steer fork and drilling for brakes. But the Tmplhof also gets improved tire clearance for 28mm rubber (like these G-One Speed tires), which the team prefers to use since much of their urban crit racing schedule has them competing over rough road surfaces. (This pre-production fork has just a few mm of tire clearance, but the production bikes available in a couple months will include ample space for these tires.)

The frameset will be available from the start of May 2018 in a polished raw alloy finish with a matte black painted fork for 600€, either space red or space blue including a matching fork for 650€, or this team edition paint job for 700€. 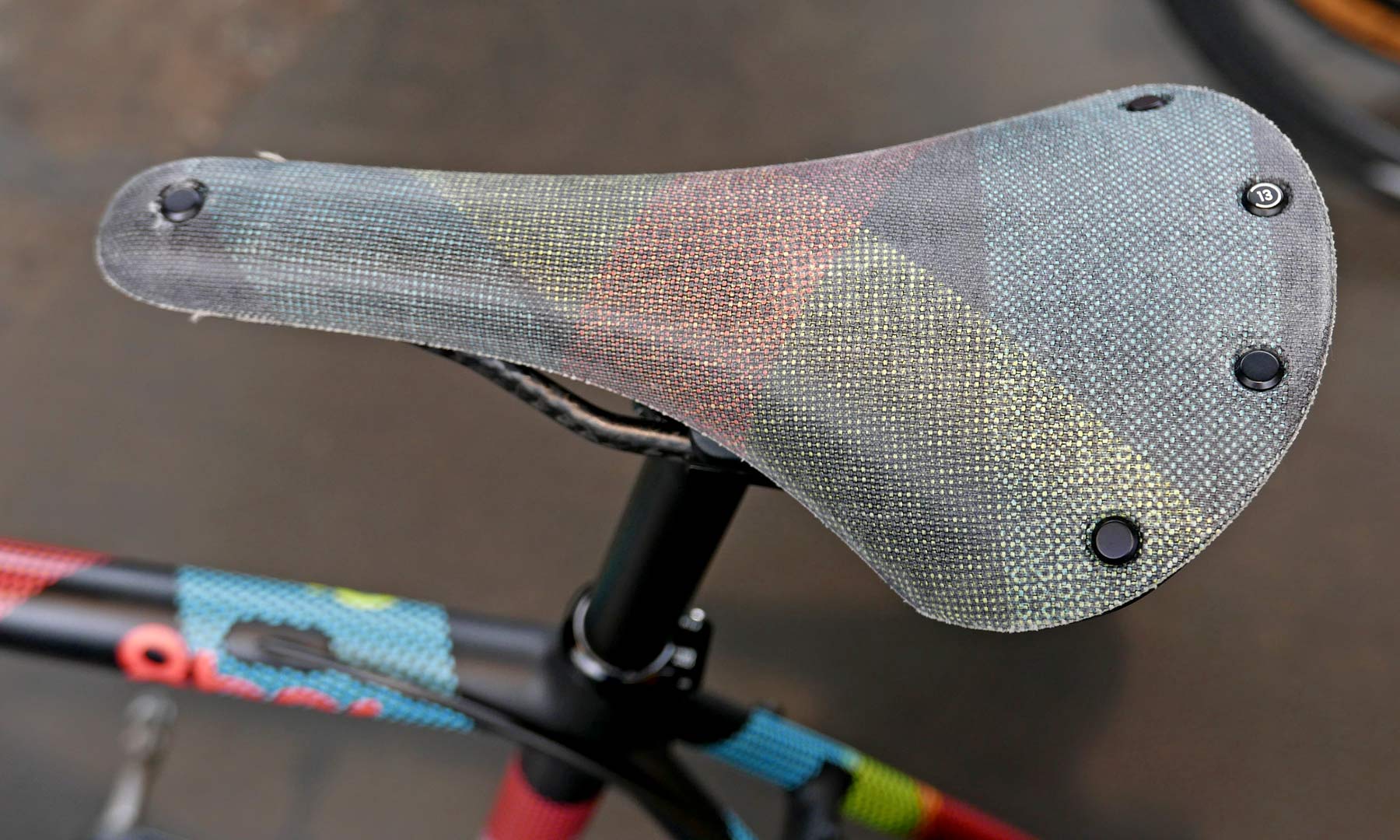 The team edition Brooks Cambium saddle was also to be available separately. After making a limited run of C13 saddles last year with David Millar’s Chpt.III, Brooks again produced a limited run of the carbon railed saddles on their website. Unfortunately it seems, they sold out almost instantaneously, so you’ll have to buy a team edition bike to get one now. But Brooks said to expect more limited run saddles to come from their Cambium line in the near future. 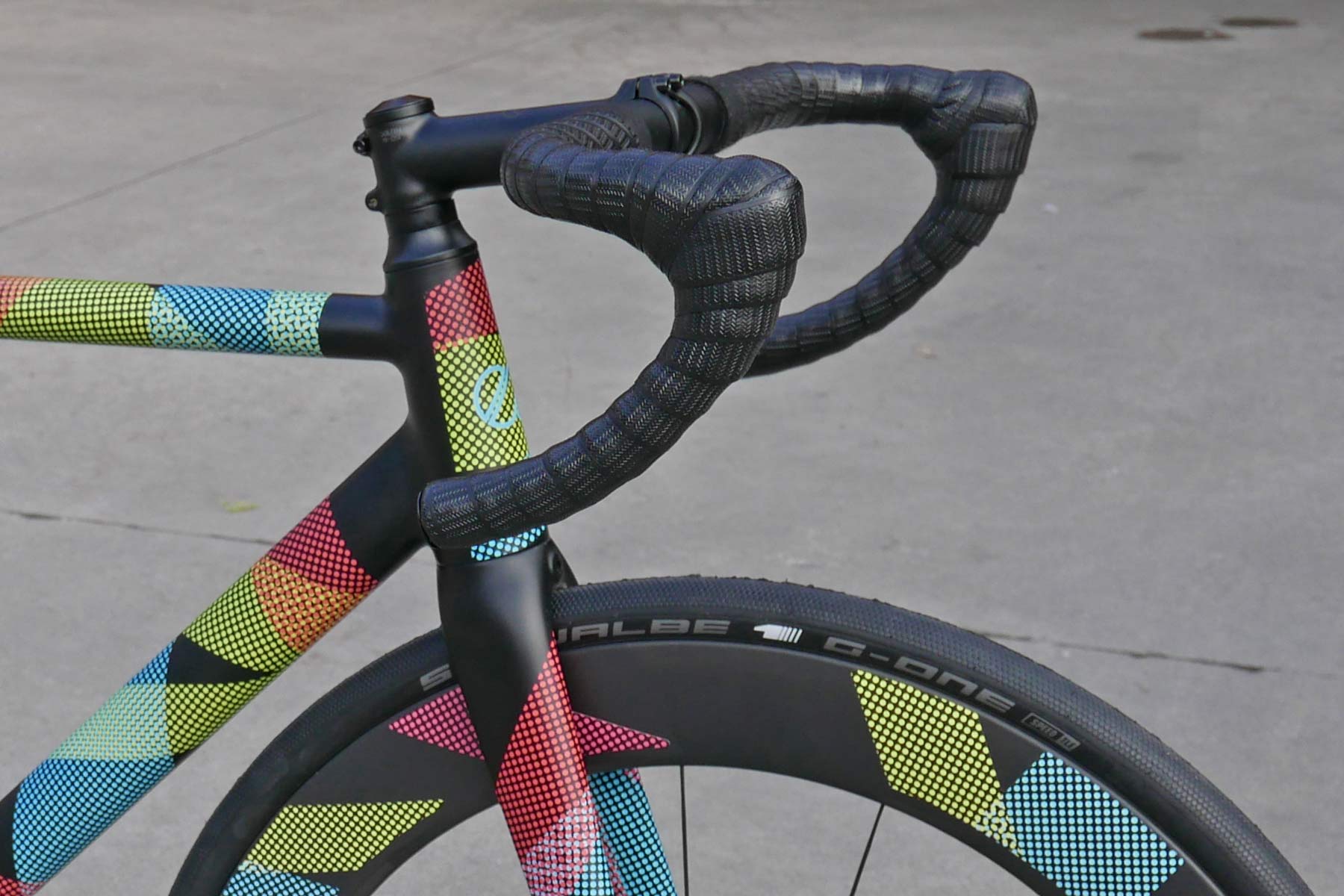 Another interesting find on the team Tmplhof are the hoods. When racing fixed gear, riders don’t have brakes, so they also don’t have brake hoods. As many road riders have adapted their fit and riding position on the bike, resting your hands on the hoods has become the norm. In order to give their team more hand positions and importantly something else to leverage against while sprinting, 8bar is developing a set of Aero Hoods that clamp onto a standard drop bar, just like a set of brake/shift lever bodies would.

These are a 3D printed prototype, but 8bar says they are ironing out the kinks before making a production item. Speaking of kinks, they say that while the team loves the fit, they are still working on the design to make it easier to wrap them with bar tape cleanly.

Team editions of the Adistar cycling jerseys & bib shorts, and the aero Adidas skinsuits that the team race in are already available from 8bar’s online shop. There is even a team edition pair of Adidas Zonyk sunglasses on offer. 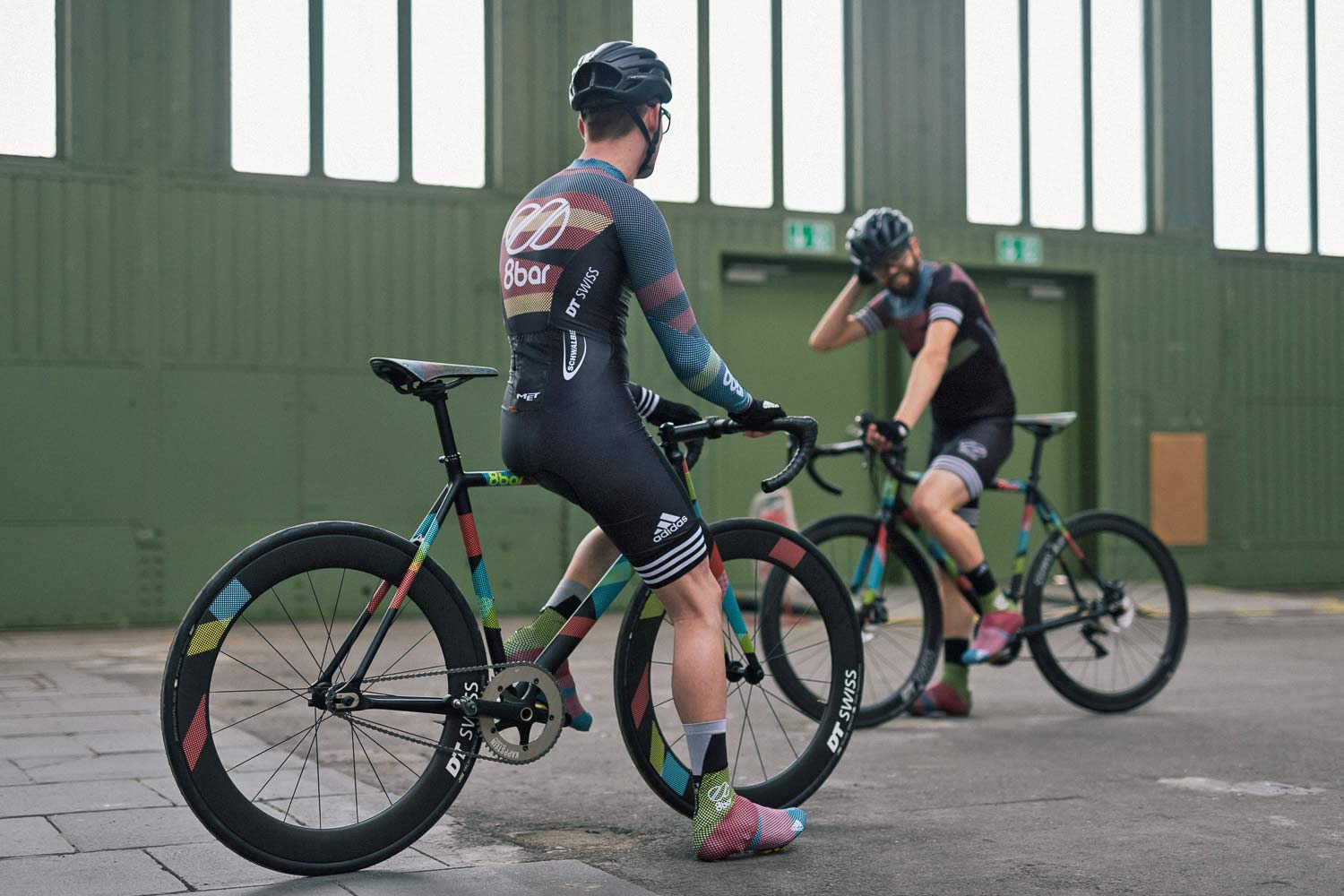 Aero Adidas shoe covers will be added to the shop soon, as will a matching team edition MET Trenta aero helmet.

A beautiful bike – looks great, but how can you put a tire on that rubs the top of the fork??? (see picture 3 blowup)

@Larry while it looks like the tire is almost rubbing, there was a tiny bit of space 😉 Anyway, the production bikes will include a fork with ample space around the crown for these 28mm tires.

you see
Reply to  Cory Benson

Those aero hoods are ok, but it’s still nice to have something you can wrap for fingers around while riding the tops. Back in the day Dia Compe used to make dummy hoods. When riding in a pack, it’s good to be able to see over the back of the guy or girl in front of you.

Agreed, those look frightening. Kind of like sticking my toes over a cliff edge

Whats with the internal brake housing for the rear? Hmmmmmmmm. MONTANA!!!!!!!!!!

Are those the actual aero hoods? Just looks like some nubs they made with extra bar tape.
I’d also say they are shaped in any form to be a function hood for human hand. Hoods look the way they do for a reason (slight upturn to secure the hand).

These fixed gear crits are way too corporate now. I blame specialized.

This isn’t a crit bike, where are the scratches, the Shimano 105 5700 mix and match groupset and dengfu clinchers? Well at least they got the frame material right.

I like the lightweight sprocket/chain idea. However is Kappstein even still in buisiness?
Their website has disappeared a while ago.