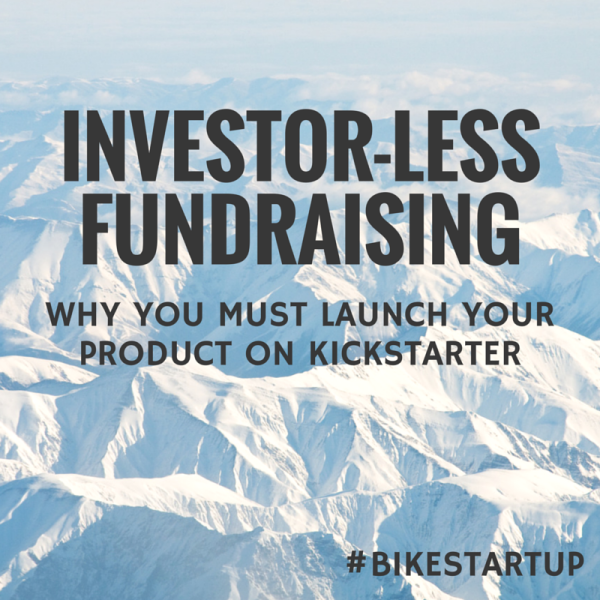 We’ve been a promiscuous startup.  In our seed round, we raised money from two rockstar VCs and sixteen angel investors, which include a mix of serial entrepreneurs, friends, and even two wonderful customers. If you asked me behind closed doors what we think of our investors we’d say, “We love them: they’re champions, mentors, and turbochargers.” Because it’s true.

But you know whom we love more?

Our customers.  You see, our customers put $300K into two Kickstarter projects and they…

We’ve discussed the second and third bullet points before, so I’ll expand a bit on the first one, then dive into the three key elements to a kickass Kickstarter…

Do you know what sucks more than having a warehouse full of product nobody wants? Realizing you paid hundreds of thousands of dollars for that product that no one wants and there’s no way you’ll ever recoup that. Crowdfunding vets your product before you contract with a manufacturer to produce 100,000 units of something and shell out many multiples of that to have them make it.

2. Get the money before you produce anything

For most startups, this is backwards, but it’s so much better. Not only do you get approval for your concept, you get the money to produce it from your future customers. And the best part is, they don’t take equity – they pre-purchase product. VCs call this non-dilutive financing. If you’re launching a consumer product it’s one of the biggest reasons you’d be crazy not to use Kickstarter.

1. Get emotional with your story

Most Kickstarters don’t tell a story – they simply say, “here’s my gadget. Aren’t these gadgets nifty? Please support me.”

A great Kickstarter project makes you feel something. In the book Made To Stick: Why Some Ideas Survive and Others Die, authors Chip and Dan Heath write, “a credible idea makes people believe, an emotional idea makes people care.”

We struggled with this on our third Kickstarter project: how do you make an anti-theft bike seatpost evoke emotion?  We tapped into the emotion of city cycling – the fear when you’re buzzed by a SUV, the rush of breezing past gridlocked traffic, and the outrage of having your bike and accessories ripped off.  We had our Eureka! moment when our friend Max had his bike seat stolen. We found the thief selling it on Craigslist, caught him, and filmed it all. Check out the emotion in our third Kickstarter video:

A compelling video tells a concise, emotional story that connects with the audience

2. Get high with a little help from your friends

A successful Kickstarter launch creates a movement, and a movement starts with a core. Your friends are that core. Too many entrepreneurs make the mistake of keeping quiet about their Kickstarter project – perhaps sharing it on social media the day of the launch. Call it modesty or insecurity; it’s the wrong approach.

Your friends and family love you and love watching you succeed. It’s easier to ask for support when they’re excited about your company and nothing works better than a launch party. We threw a bike-hipster costume party on a Saturday then hosted a Monday morning bacon, waffle, and mimosa party at our co-working office.  We counted down from ten, pressed launch, and had thousands of dollars of support from friends within hours.

3. Get lucky with media

Once you have a great product and an emotion-evoking story, it’s time to share it with the world. You can’t afford a PR company, but you can generate your own press with connections, persistence, and luck.

We started months in advance engaging with our favorite blogs and media outlets through article comments and on Twitter.  In the week leading up to the project launch, we emailed more than one hundred journalists.  The response was deafeningly quiet but the day we launched at least twelve journalists wrote about our product and helped spread our story.

Of course, none of this matters if you didn’t follow these steps to making a bike product cyclists will love.

In the next article we’ll talk about the art and science of sales and distribution. In the meantime ask us questions. We’ll answer every single one of them.

Slava Menn is a serial entrepreneur and CEO of Fortified Bicycle. He loves biking, building, entrepreneuring, and teaching. In this monthly series, he shares his team’s hard-learned startup lessons with aspiring entrepreneurs.

Haha. Please show us how 🙂

Oh man, I could write a book about securing angel investment and all that is involved. I wish Kickstarter had been around 5-6 years ago when I was trying to get funding. It took years of presentations and meeting all the right people but eventually secured around $500k, but had to sign off majority ownership in the process.
However, what’s not discussed here is that investment groups tend to bring along an unbelievable amount of business experience and connections. They may be lacking in knowledge on your specific industry but they know business and that’s paramount. Anyone can have a fantastic idea. Even if you get a prototype made, there is an ocean between that and actually getting product placed in the customers hands.
I wouldn’t wish what I had to go through on my worst enemy (check that, I would), but I’m better for having gone through it.
Crowd-funding is great for the reasons mentioned in this article but handing over half a million dollars to someone and simply saying “do it” is like handing the keys to a Ferrari to a teenager.

I’m trying to do this right now with this Kickstarter for bike commuters… http://kck.st/1zxye2K I know it’s not a capital intensive product…but looking towards your Point #1, validation.

“Crowd-funding is great for the reasons mentioned in this article but handing over half a million dollars to someone and simply saying “do it” is like handing the keys to a Ferrari to a teenager.”

@Evan: we’ve done both crowdfunding – 4 times. 3 Kickstarters and one Angellist. We also raised $800K from angel investors and VCs. Agreed that investors bring help and expertise to your business. But nothing beats getting dilution-free cash from customers.

@craigsj – respectfully disagree. If you can generate $500K in crowdfunding you worked really hard to get there and you’re going to continue to work hard and deliver the product. The proper analogy isn’t “handing Ferrari keys to a teenager”. It’s more like: “a teenager works his butt off and buys a Ferrari. She’ll take good care of that Ferrari.”

There are exceptions of course: Kickstarters who raised money and then fell flat in manufacturing and never delivered. We touched on this in a past article: http://bikerumor.com/2015/01/16/bikestartup-the-first-3-steps-to-slaying-the-manufacturing-dragon-and-mass-producing-your-killer-product/

@Brent- cool product! You’ll get tons of feedback from customers. Looks like you already got 30 of them to tell you what they think!

What advice would you give for a new handmade cycling product called JET Roll.
JET Roll is completely made by hand in the USA. Does that add value to the product?
Who should I contact in the industry to get some more exposure and product recognition.
Thanks, Steve
http://www.justenoughtools.com

If it’s a killer idea you’re handing the IP over for nothing by sticking up for crowd funding. How can you protect your idea from what may be already better funded competition?

Thanks for the info Slava.
Quick question … prior to the first Kickstarter project, had you you raised money from investors ?