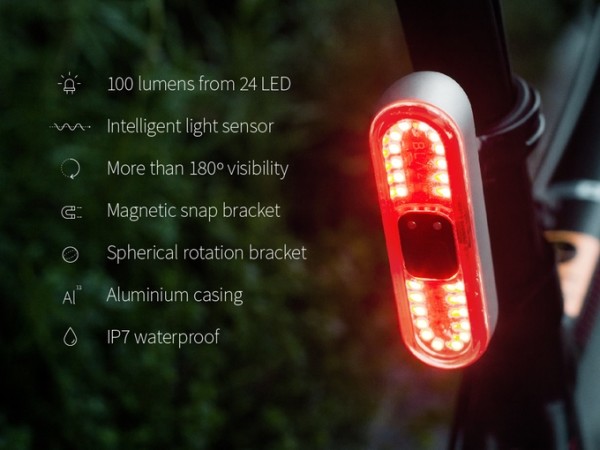 Whether it’s due to the rapid increase in lighting technology, the number of car vs. cyclist incidents, or the tech industry trying to home in on the bike industry, there have been a lot of lights released recently. And that’s a good thing. More options make it easier to light up and keep yourself seen. Also, increased competition usually leads to better products which seems to certainly be the case with front and rear lights.

After successfully funding their Laserlight headlight, Blaze is back with an impressive new tail light. If the overall brightness doesn’t attract your attention, the way it mounts to your bike just may… 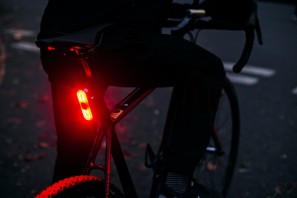 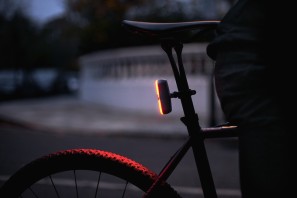 Built with 24 LEDs housed in an aluminum, water proof casing the Burner provides over 180º of illumination with a thin strip visible around the perimeter of the light. Thanks to the IP7 rated casing, Blaze claims the light is water proof, not just water resistant.

In addition to standard solid and flashing modes, there is also an auto mode which uses a built in sensor to determine when to turn the light on and off. The sensor measures the ambient light and will turn the Burner on when it starts to get dark, or you ride through a tunnel, under trees, or any situation with low light. The company is looking for feedback through the Kickstarter on how to program the available flashing modes stating the LEDs have 60 levels of brightness which could make for some interesting patterns.

Battery life is claimed to be about a month under “standard urban usage,” with a claimed weight of 100g. 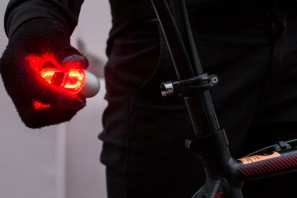 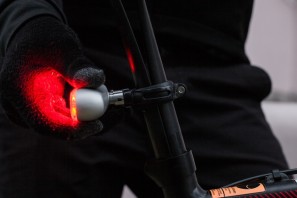 It may seem odd to get excited about a mounting bracket, but the Burner does seem to have it all sorted out. The mounting bracket itself clamps down around c-shaped piece of rubber on the bar (for the white LED version) or seat post. That rubber bit forms a spherical shape that allows the bracket to rotate and provide the perfect angle for different seat post angles.

Better yet, the actual light attaches to the Mag-Sphere bracket with a strong magnet. This allows for rotation of the light for the indexed horizontal or vertical setting, and makes it a snap to remove the light once you get to your destination and lock up your bike. The bracket is bolted on and stays in place when you’re not using the light.

Additional magnets are used for the charging cable rather than a micro USB port which could let dirt and water into the light. 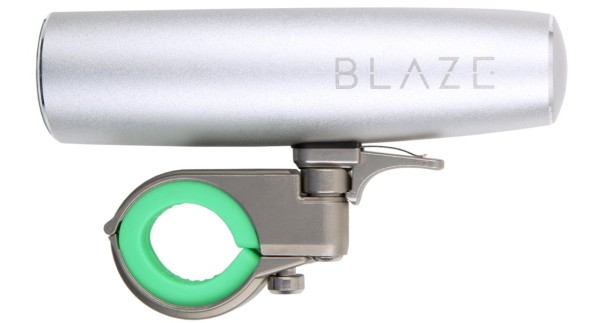 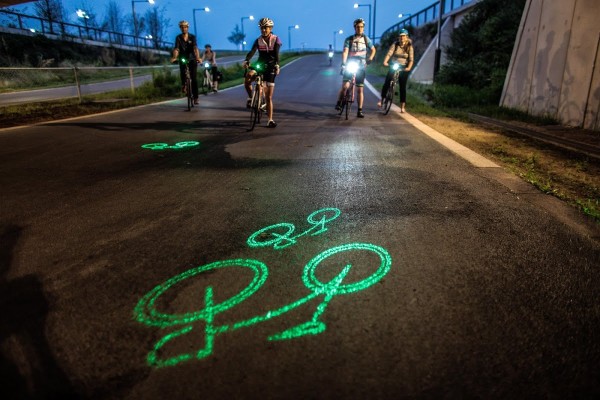 Burner rear lights start out at $59 during their Kickstarter and are also available paired with a white LED Burner, or their novel Laserlight which projects a laser bicycle outline out in front of the 300 lumen headlight.

Another just cool light but no practical, what happen for aerobikes? Aero seatpost? Triathlon bikes? When the seatpost are different?

Whilst I always welcome new developments in bike lighting, the race for brighter lights doesn’t necessarily solve the issue of bike safety in the dark. In my experience when riding at night in UK traffic the issue is that drivers cannot see cyclists from the side, especially at the front. This means that when approaching junctions (where most accidents happen) the front light my be obscured by parked vehicles or other traffic.

The best solution is helmet-mounted lighting, not a brighter rear light! That said, someone once pulled-out in front of me dangerously and I could see the strobe from my helmet light reflecting off their eyes. Sometimes, nothing is good enough…

A rear light, obviously, won’t project side visibility. You need to wear high vis reflective gear for that.

Sigma Sport Stereo – The better tail light
Mounting is similar
replaceable AAA batteries (tool free!)
externally chargeable via micro-USB
burn time up to 20h with attached batteries, even more with batteries with higher capacity
batterie indicator built in on/off switch
tool free mounting
bracket can be fixed with zip-ties or o-rings
visibility up to 220°
not a bulky/heavy as the blaze
and it only needs two LEDs instead of 24 to produce a well visible light
oh and it cost about 15EUR

thanks for the tip, dan! ordered a few, see how they hold up

I wish some of these companies would come up with a seat rail mount for rear lights. I’m short, with a small frame, and I cannot mount a light and rear fender at the same time.

I bought five $3 made in China tail lights off of ebay a few years ago. They all still work just fine.

CatEye has the solution to all these issues, the Rapid X2 with the optional aero post mount. Check them out on the Jelly Belly pro team bikes. They ran them during the time trial stage of the US Pro Challenge.