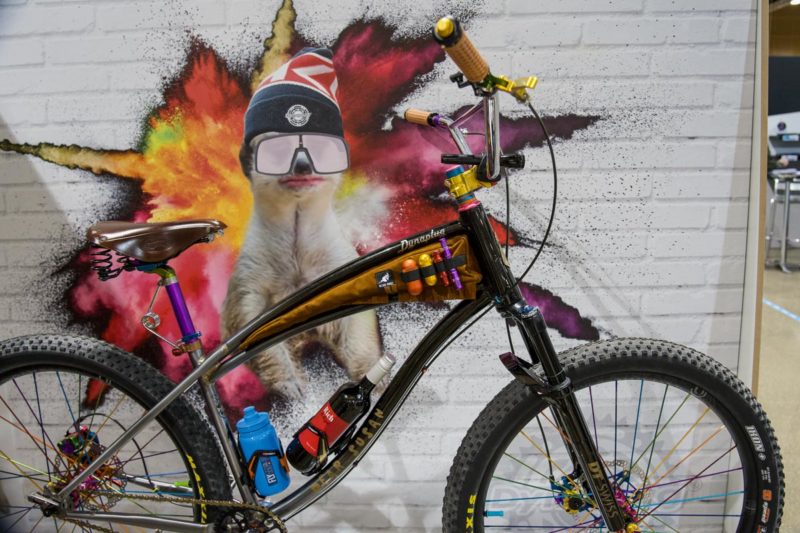 Dynaplug announced a pair of bikes built in partnership with Dear Susan Bicycles “to make a bike honoring their red-wine swilling intergalactic meerkat spirit animal.” Meant to pay homage the roots of mountain biking in both the US and UK, the bikes feature special parts from PAUL, Hope, S&M, and Industry Nine. 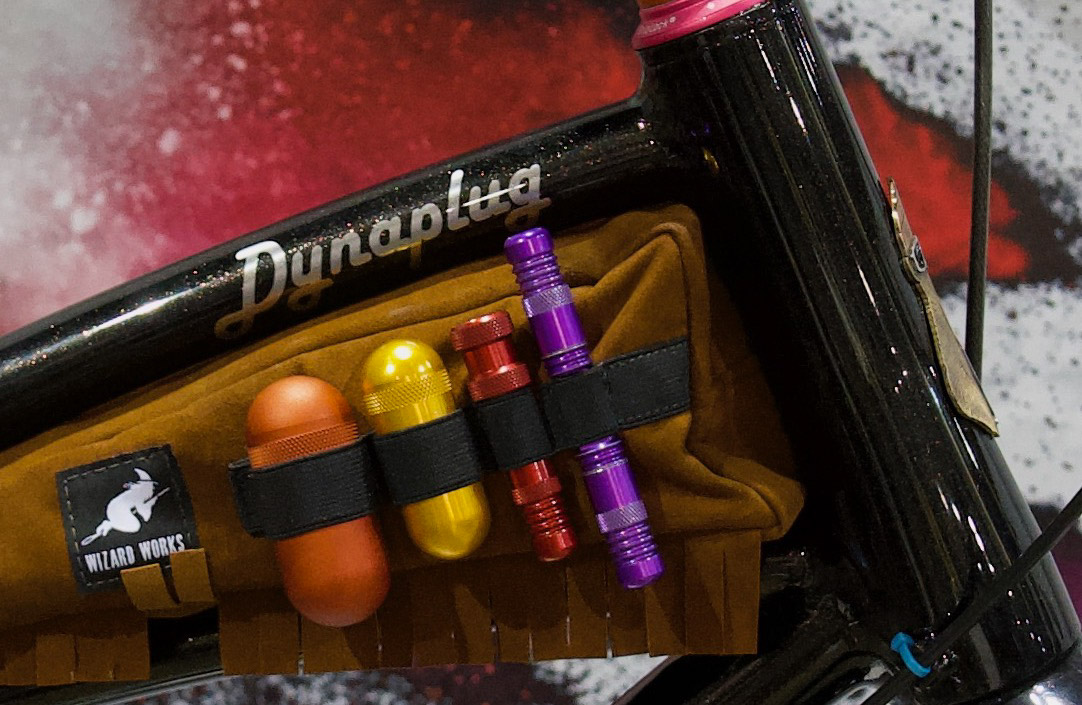 Dynaplug is best known for their tire repair and inflation tools, but they opted to step out into something a little (lot?) different for the Sea Otter Classic this year. Dubbed the Meerkat Hooptie, this rig is colorful to say the least. 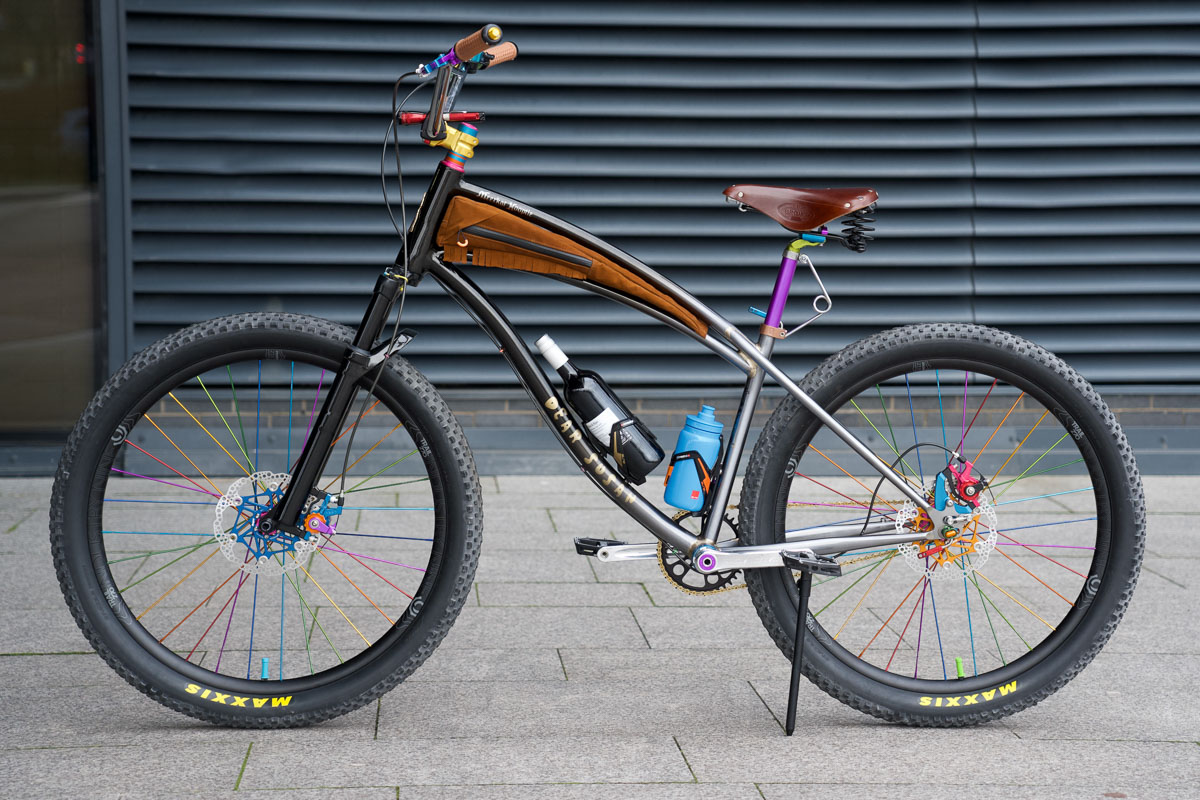 In their own words…

“The Dynaplug Meerkat Hooptie is the party animal to the more reserved Dear Susan Hooptie, though both pay homage to the classic UK and US klunkers that birthed the MTB movement, subsequently giving rise to tubeless tires and thus Dynaplug.” 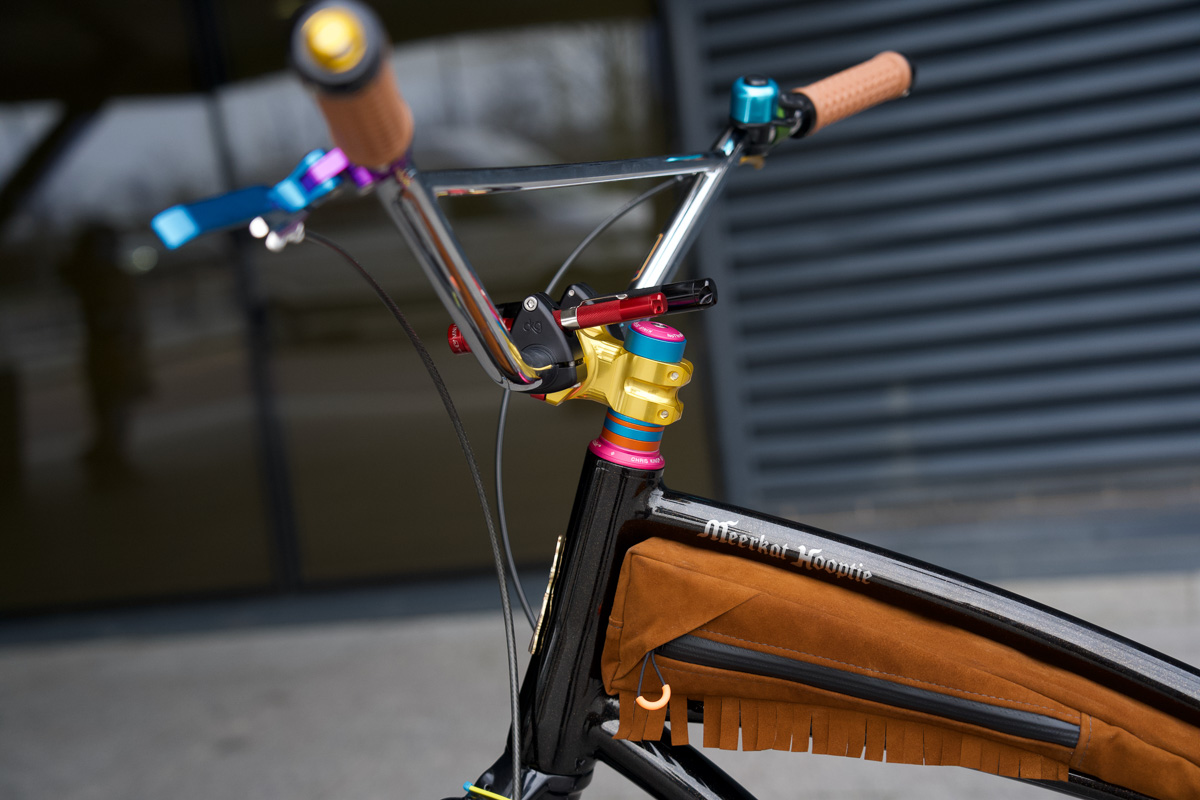 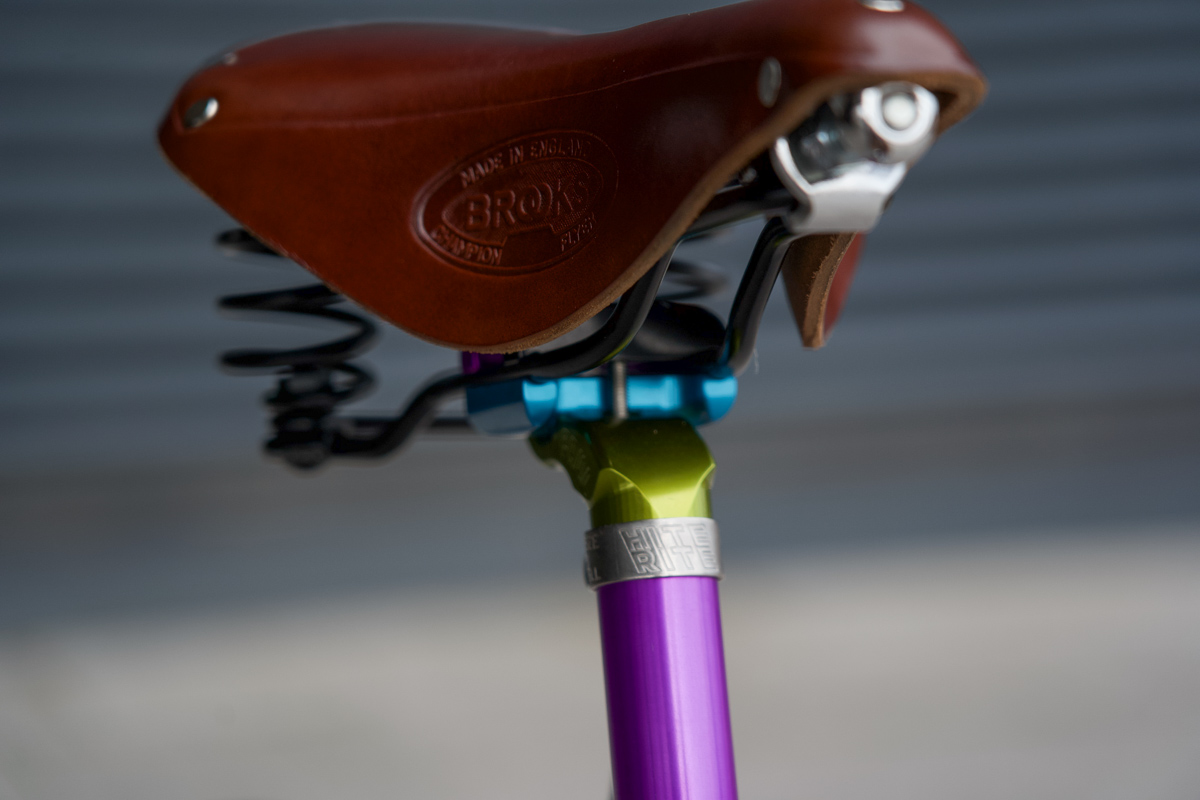 “The Meerkat is encrusted in multi-colored anodized bling from boutique US makers including Paul Components, White Industries and Industry Nine, while the Dear Susan Hooptie arrives dressed mostly in Hope Tech. The frames are built from a mix of Columbus tubing, painted with a subtle sparkly fade and topped off with jeweler-made head tube badges.” 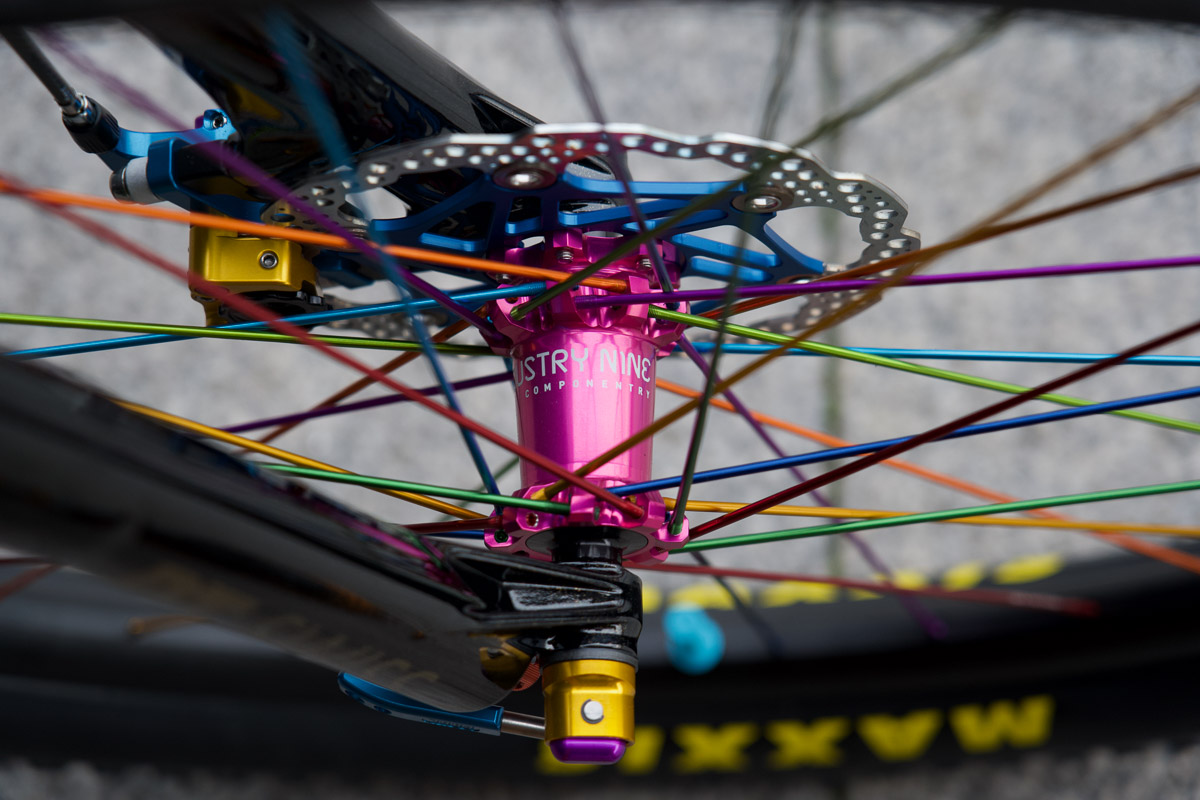 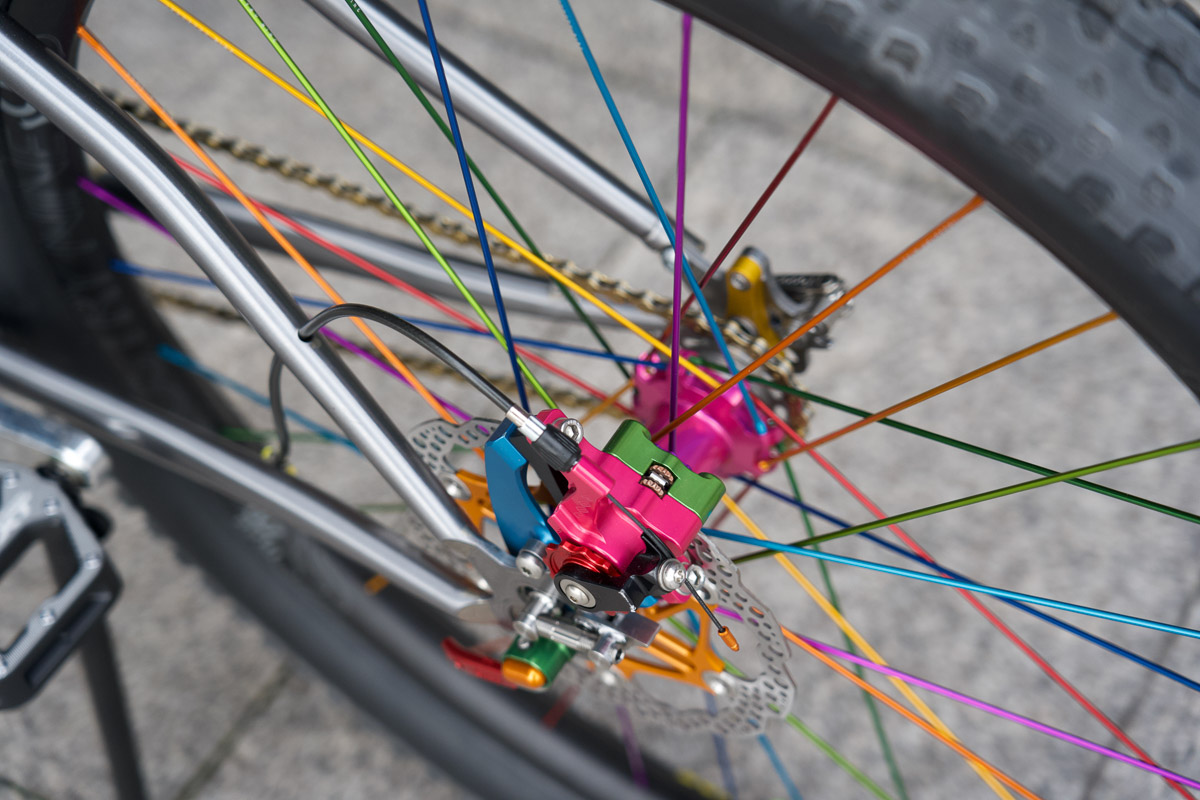 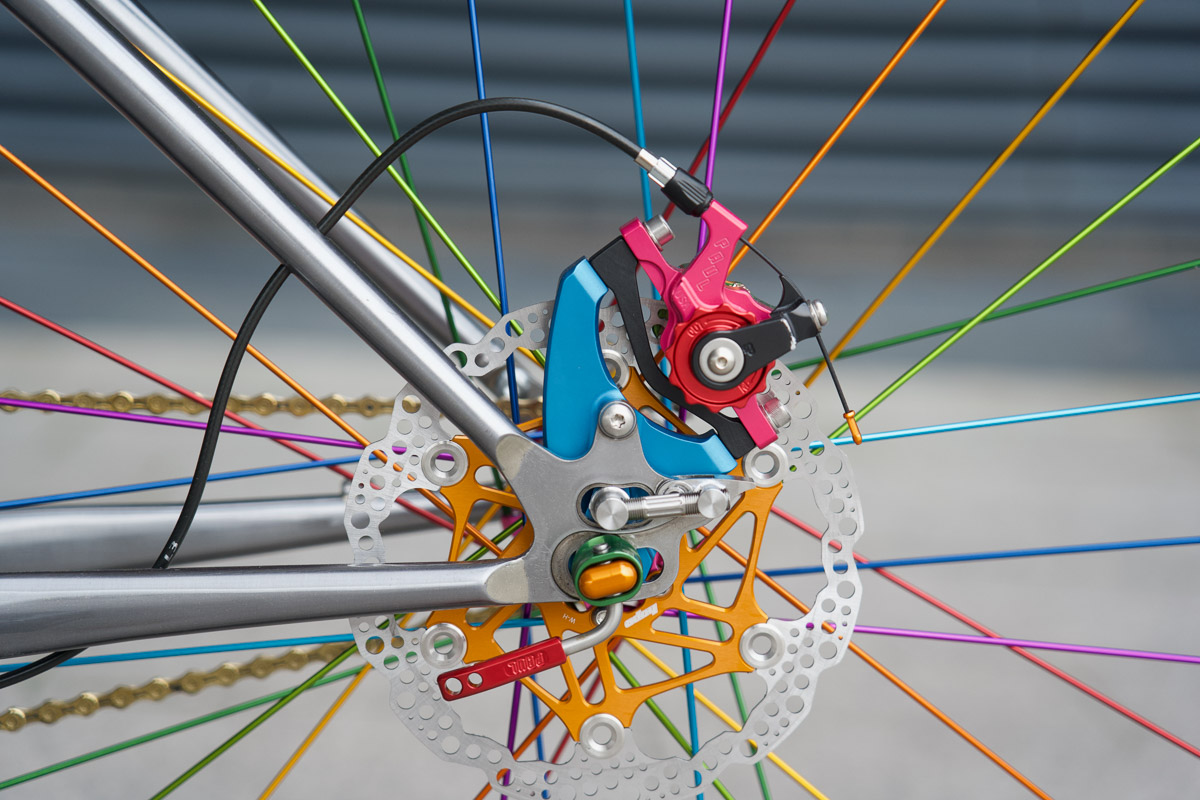 “Topping off the builds are magnetic frame bags to hold Dynaplugs and party supplies, and (of course) tubeless tires. Because, after all, without tubeless tires and Dynaplugs to keep them rolling, none of this meerkat magic would have ever happened.

Keep an eye out for the Dynaplug Meerkat Hooptie at the Sea Otter Classic, and if you’re lucky the little guy may show up with a bottle of red wine and an extra glass for a toast to his ride.” 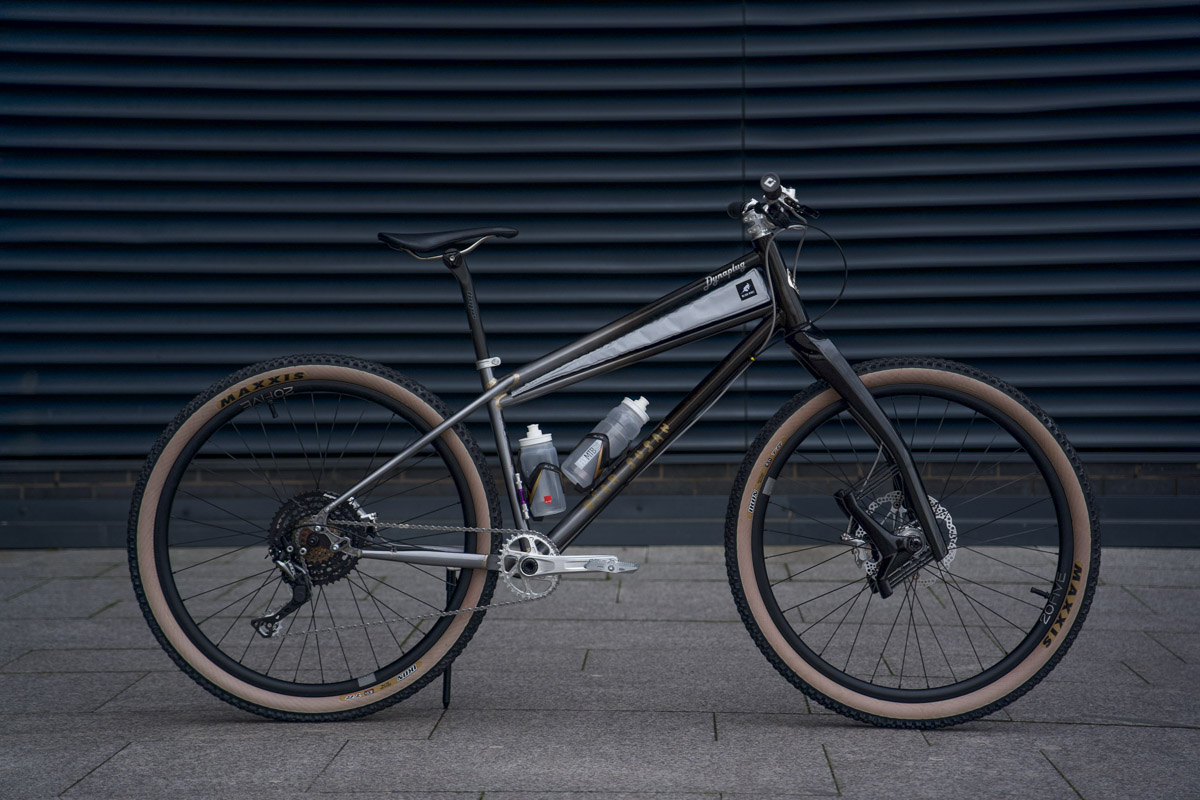 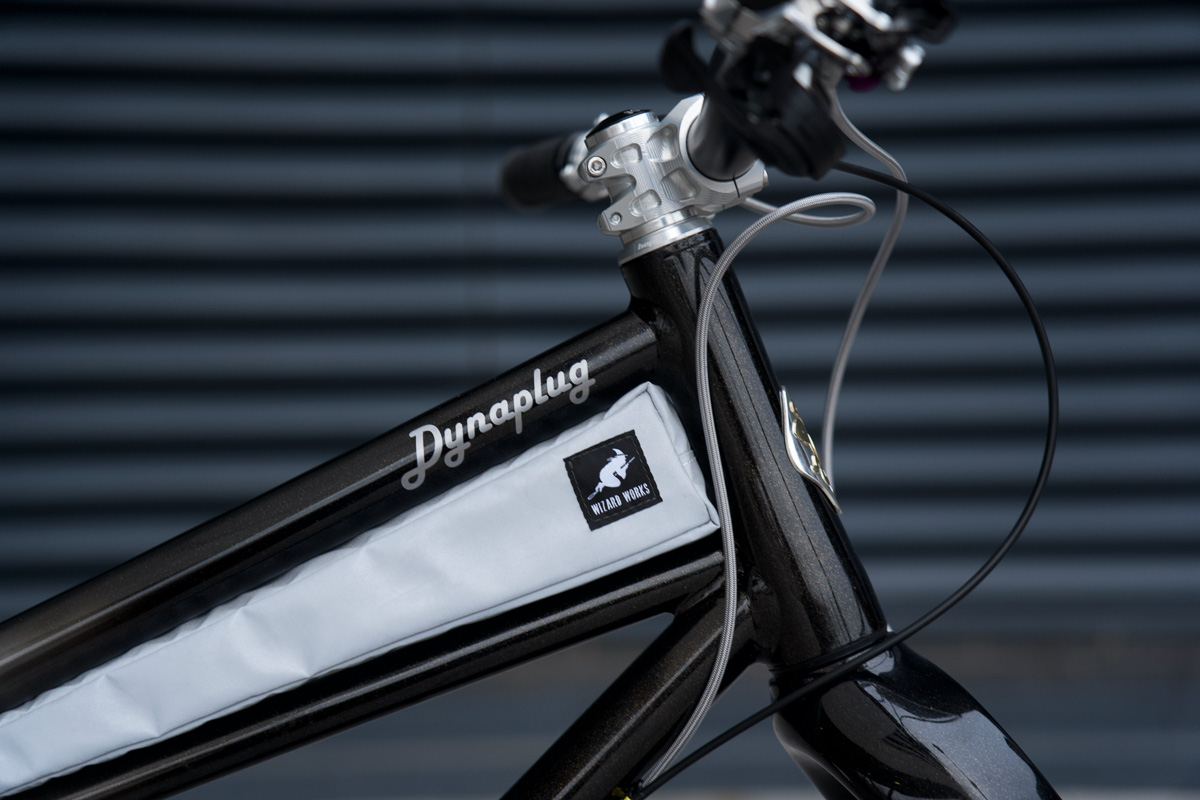 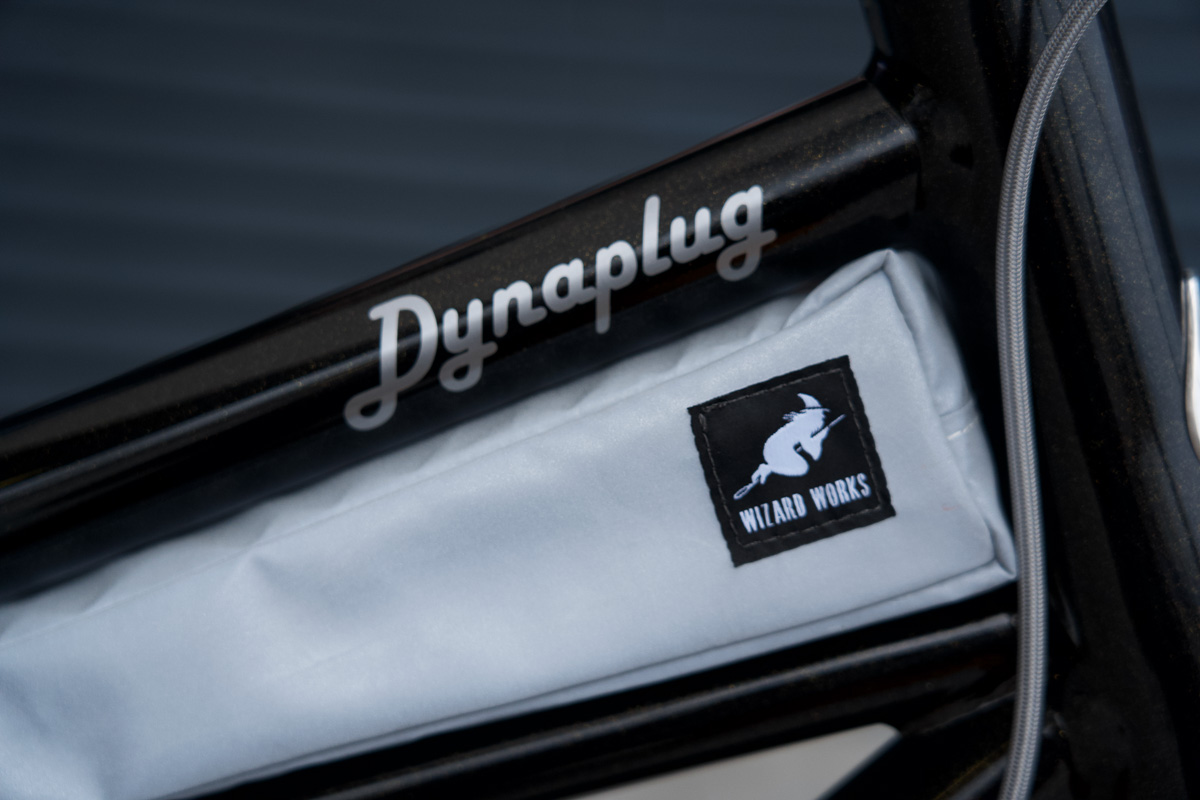 Details are slim on the second bike, but we know it sports a Lauf fork, oval chainring, and MUCH more subtle styling. 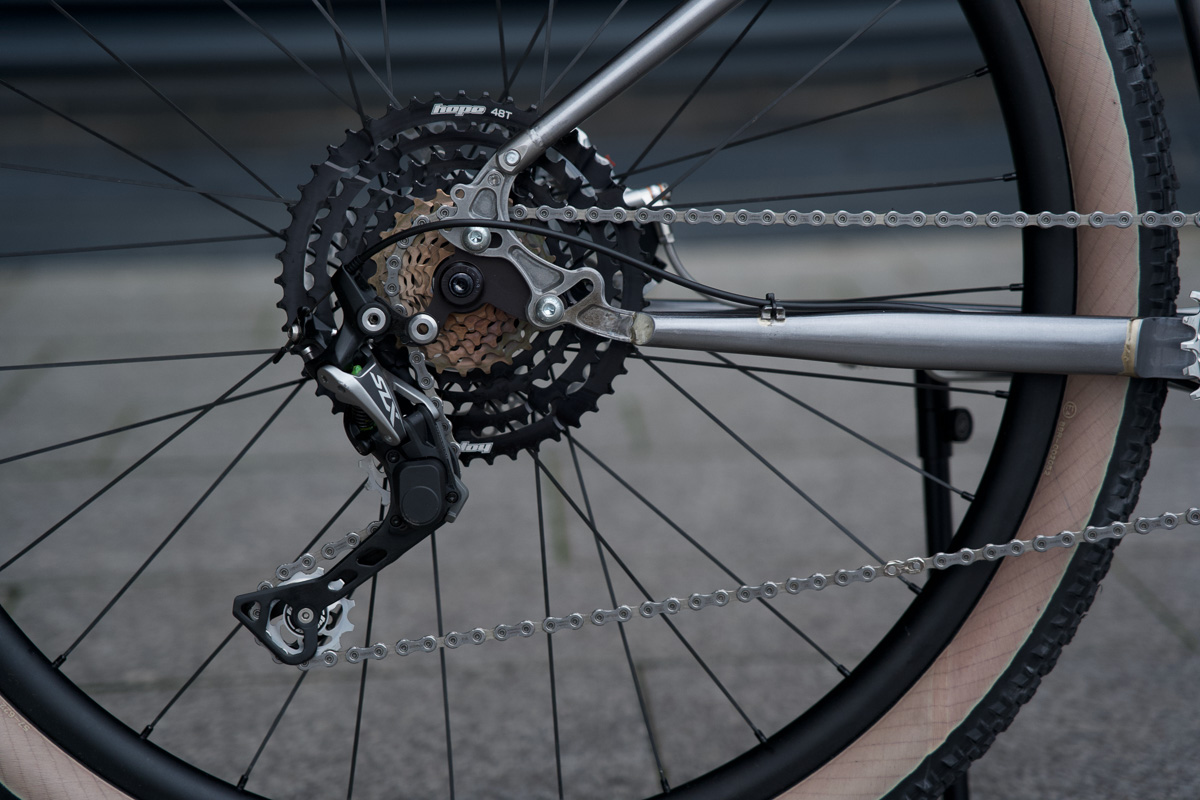 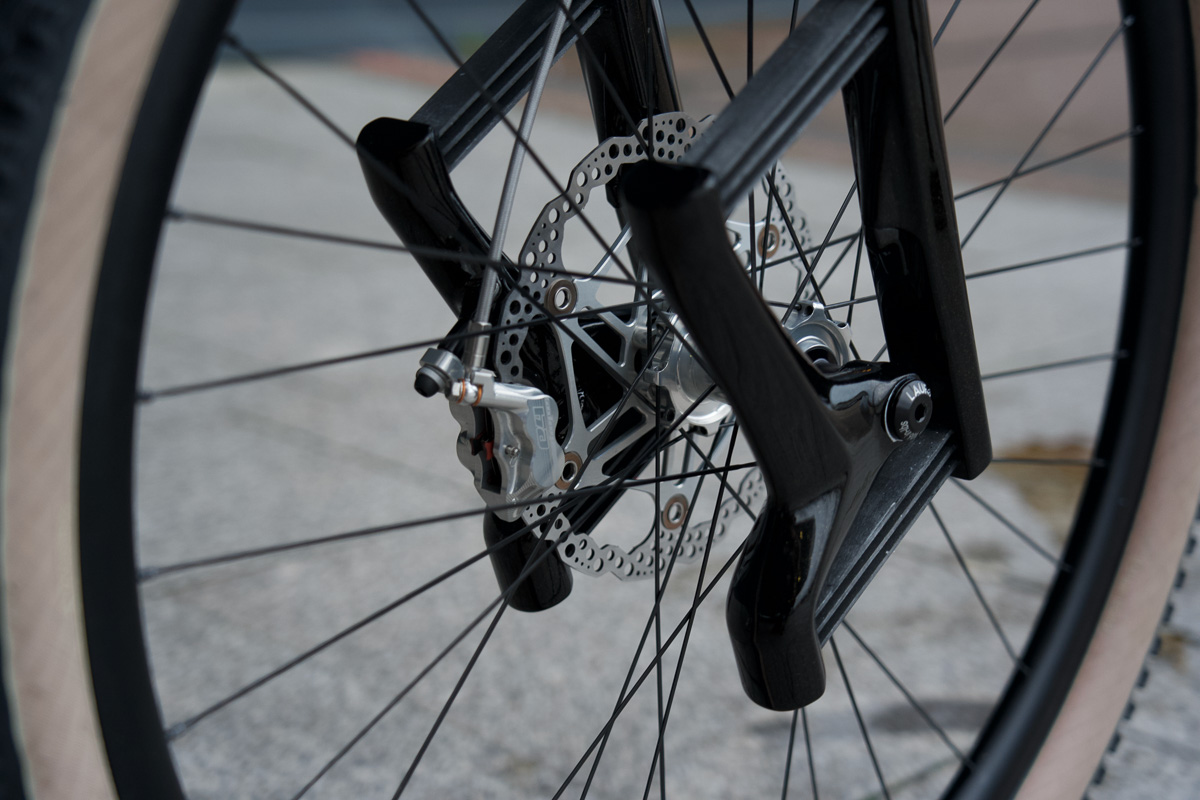 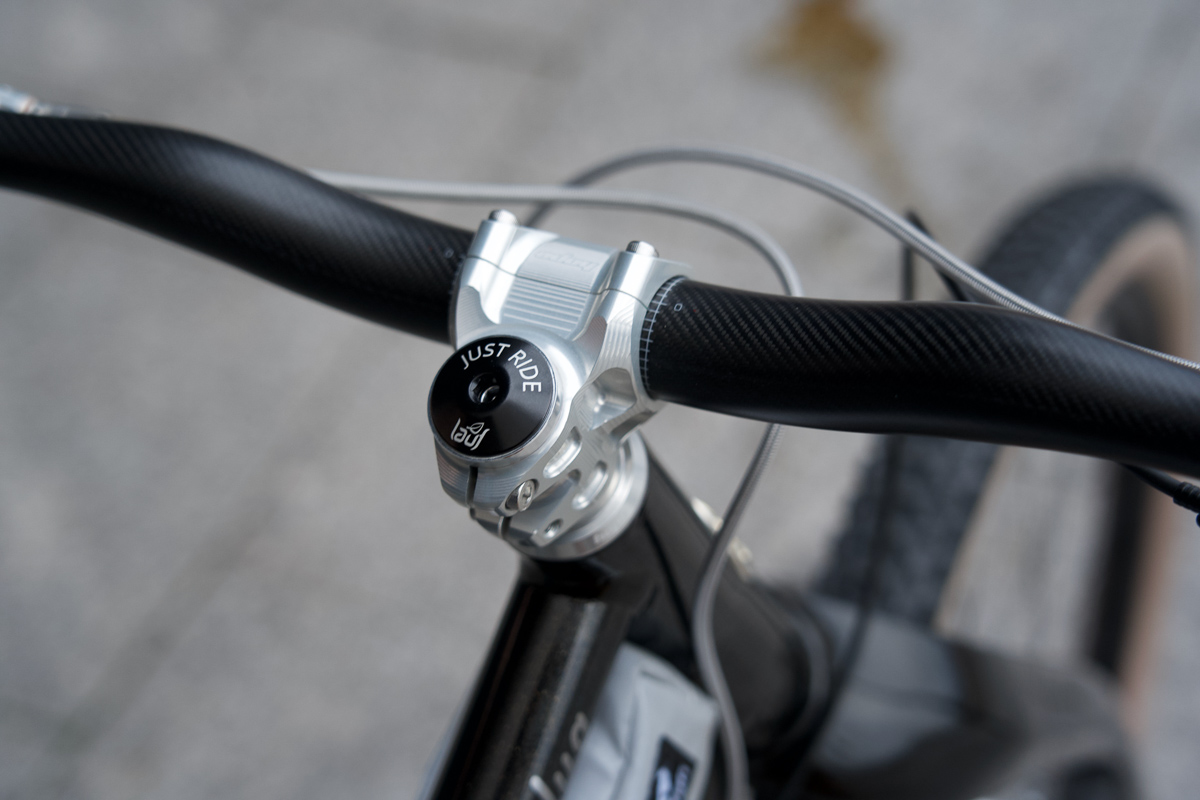 Both bikes will be featured at the Sea Otter Classic in April 2020 – so stay tuned for more information and photos.

I love that second one!

is that a long travel Hite Rite?