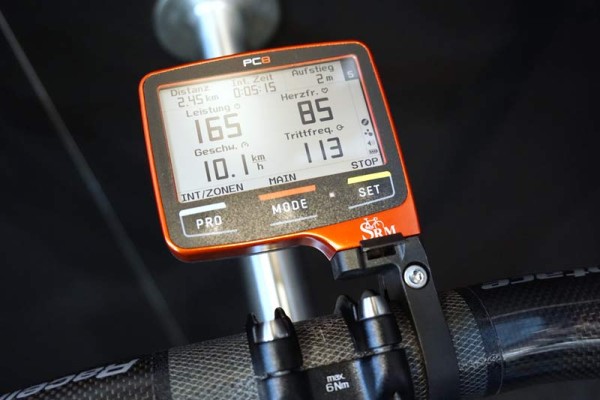 The SRM PC8 was first announced almost two years ago, with an announcement that it started shipping earlier this year. Now, the company is prepping a major firmware update, with Bluetooth connectivity getting turned on sometime in September 2015 if all goes to plan. That’ll let it connect to the upcoming SRM app, but the usage benefits of that might need some time to be realized.

There’s also a WiFi a transmitter in the PC8, but it’s not activated yet. That’s something they’re working on, but the demand for the device was so high, they wanted to go ahead and start shipping them this past May with all the hardware on board, then bring new features online as they could. Eventually, it’ll download your ride data wirelessly and send it to the cloud… 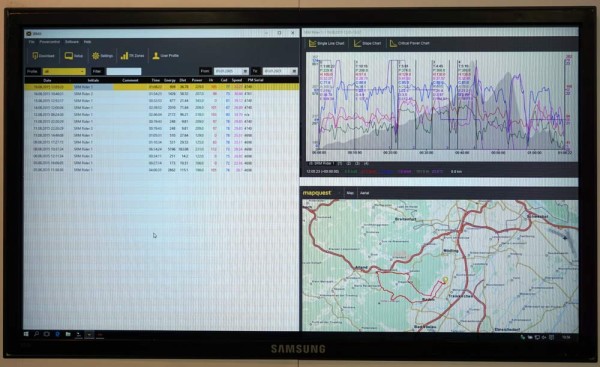 …and SRMX is the new analysis software, which is a free download on their website. It replaces the old SRMwin and SRMmac and is multiplatform compatible. 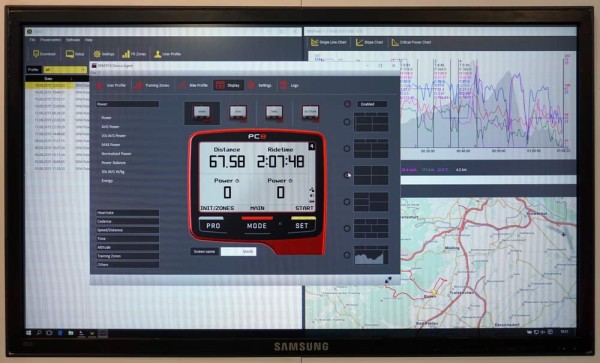 On top of that, the SRM DA (Device Agent) software is now ready for Windows and Mac to let you easily set up the computer’s displays with easy drag and drop GUI. They demo’d it and it might just be the easiest cycling computer set up I’ve ever seen. You can set up bike and personal profiles, training zones, etc. After the ride, you can use it to download your info to SRMX, which will upload to TP, Selfloops, and Strava. Once the WiFi transmitter is turned on in the PC8 all of that will happen automagically. Until them, DA is your gateway. 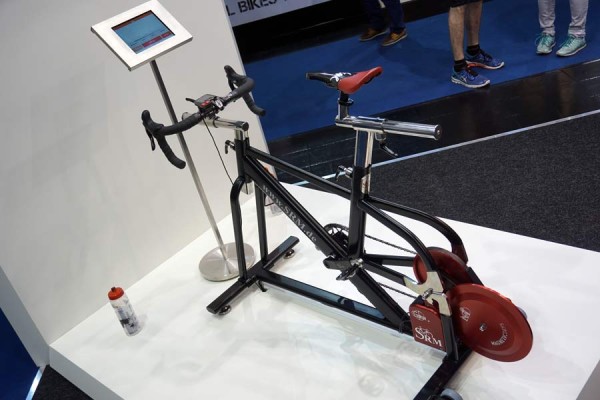 eIT is the new iOS app that controls the magnetic brake in the Indoor Trainer. The trainer launched last year, but the iOS software is finally ready, letting you start a training program and it will automatically adjust resistance, or you can manually tell it how much power you want to produce or how much resistance you want. Their crankset powermeter pairs to the trainer with ANT+, then the trainer pairs to the app via Bluetooth.

App is free, should be out very soon. The Indoor Trainer, however, starts at €2,190 without a power meter attached to it. 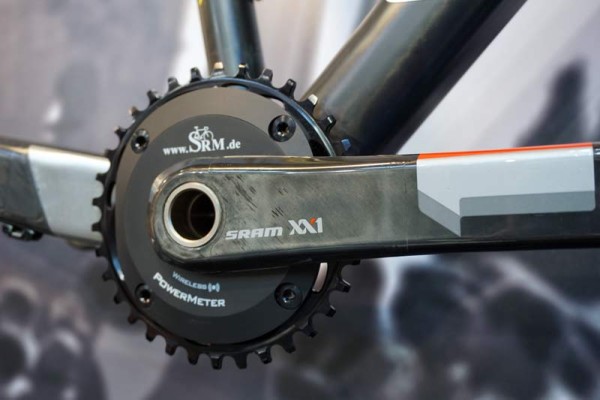 They now have MTB 1x power meters with 104BCD FOR SRAM GXP, THM Clavicula and FRM, which have an optimized shape for single chainring drivetrains. They adjust for proper chainline and modify the housing’s shape so they can work with oval chainrings.

Other than FRM, they’ll come with Absoluteblack narrow wide chainrings, and you can swap between oval and round chainrings, down to a 32-tooth ring. Prices are €2,150, available now. You can also send in your own SRAM crankarm and have them add it to it, which would save you some money but they didn’t have that number. They’re also working on a SRAM BB30 version.

With oval rings, they have noticed a difference in power readings because of the changes in angular velocity. They don’t have a solution yet, but they’re working on it. They’re also working on a 2×11 version with 104 and 64 bcd profiles to run double chainrings.

@smw says you. Not everyone can afford professional grade tools. Btw no one is forcing you to buy srm products.

“App is free, should be out very soon. The Indoor Trainer, however, starts at €2,190 without a power meter attached to it.”

The matching SRM power meter would cost more than the trainer!

@smw & @Jp have you ever really trained with a powermeter? Have you ever ridden these “cheaper” powermeters and relied on them? Guessing not. Because they have a high return rate, and aren’t accurate. you get what you pay for. Notice not a single Quark powermeter is seen in the pro peleton even now that SRAM owns them.