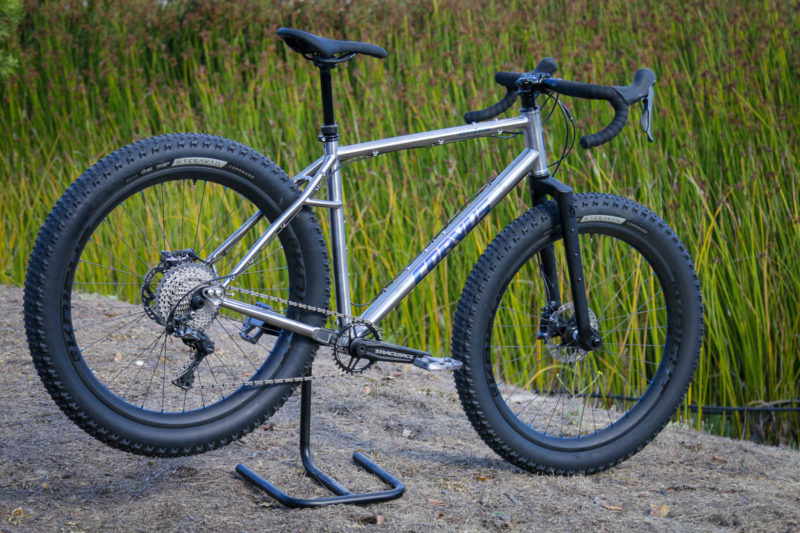 If you weren’t paying attention, it would have been easy to miss Fatback Bikes at Sea Otter. They were there, just under their new name—Corvus Cycles. Why the change? After 14 years of reinventing the world of fat bikes, Greg Matyas and the rest of the team thought it was time to evolve with a name that represented their desire to create adventure bikes for all four seasons—not just winter. Adopting the name of one of their current bikes made sense, and Corvus Cycles was (re)born.

To celebrate, Corvus was showing off four new bikes, including two completely new models bringing the team back to their roots with titanium! 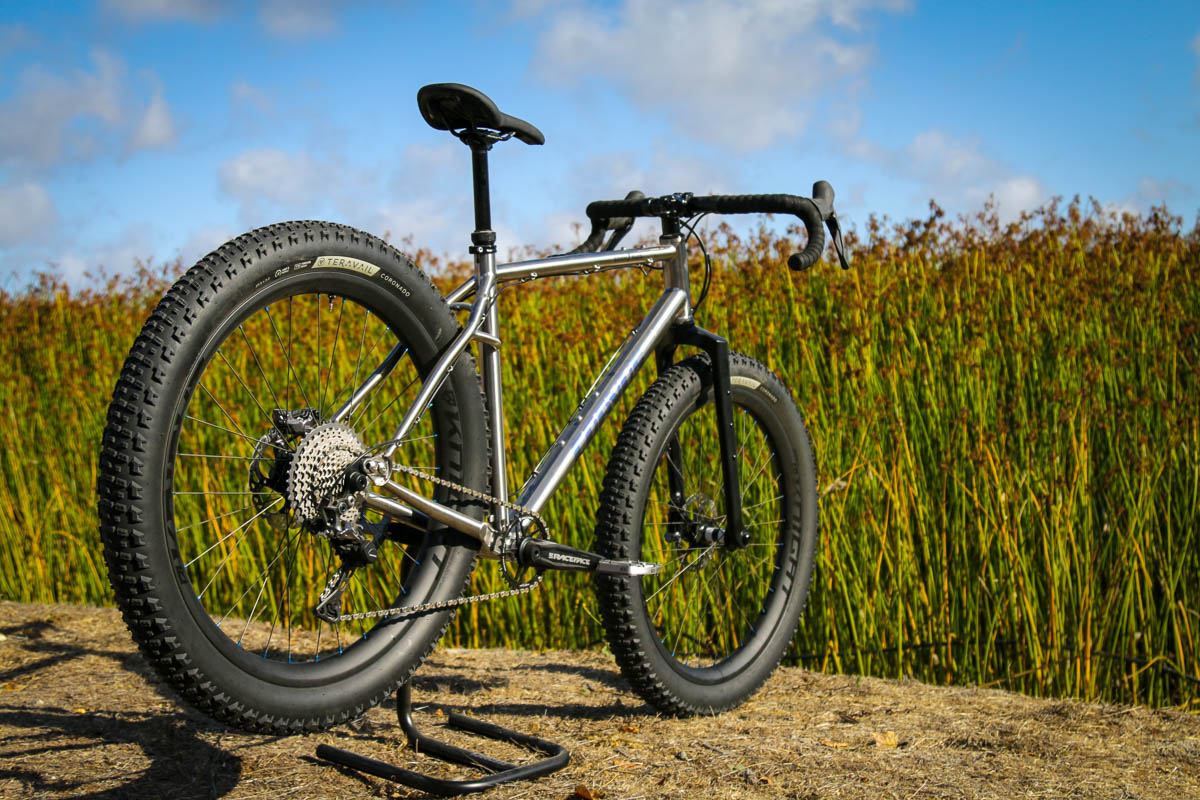 Gravel? Adventure? Bikepacking optimized? Whatever you want to call it, the Crow Pass is up for the challenge. One of the main inspirations for the rebranding was their desire to build a drop bar adventure bike, but something that they would want to ride. As Greg put it, 700c x 45mm tires just don’t fit the brand—his “skinny” tires for gravel are 29 x 2.2″ mountain bike treads. Things are different in Alaska. 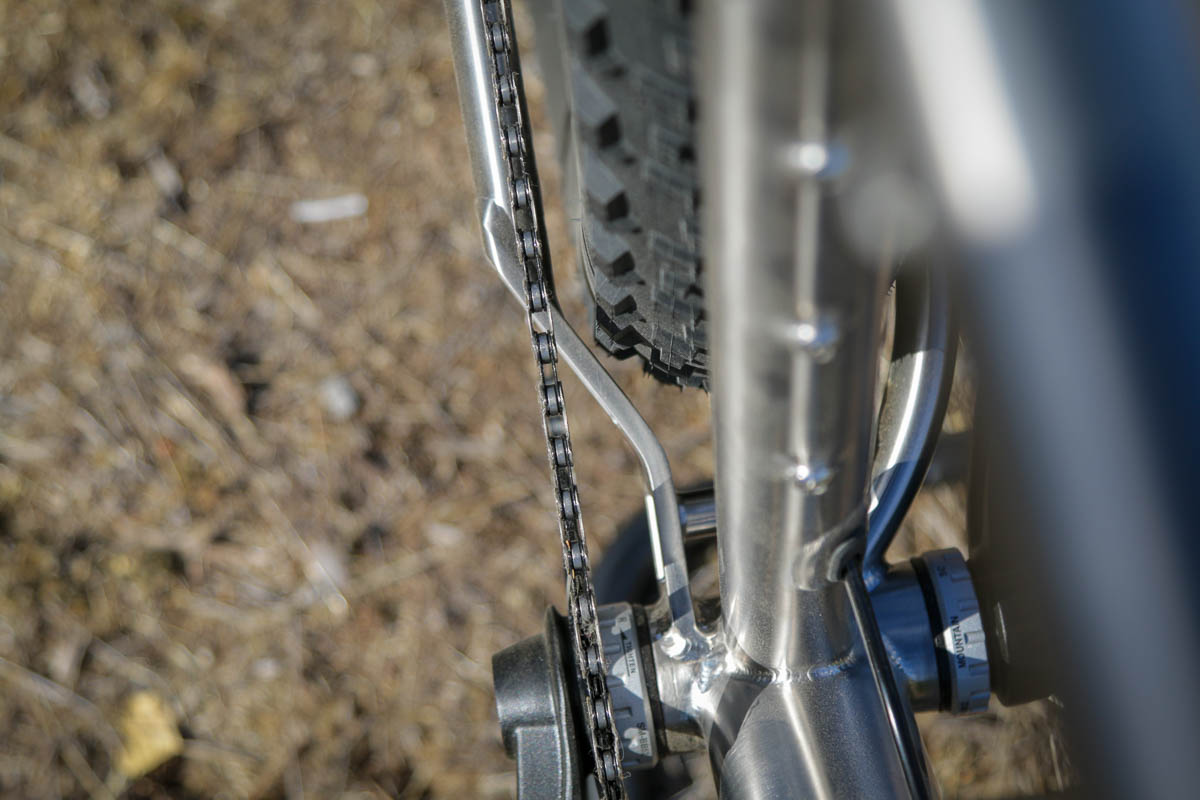 So the Crow Pass was built with drop bars in mind, but it can fit up to 29 x 2.6″ or 27.5 x 3.0″ tires. To get that clearance and allow room for 2x CX gearing or a 42t single chainring, the drive side chainstay uses a forged plate. 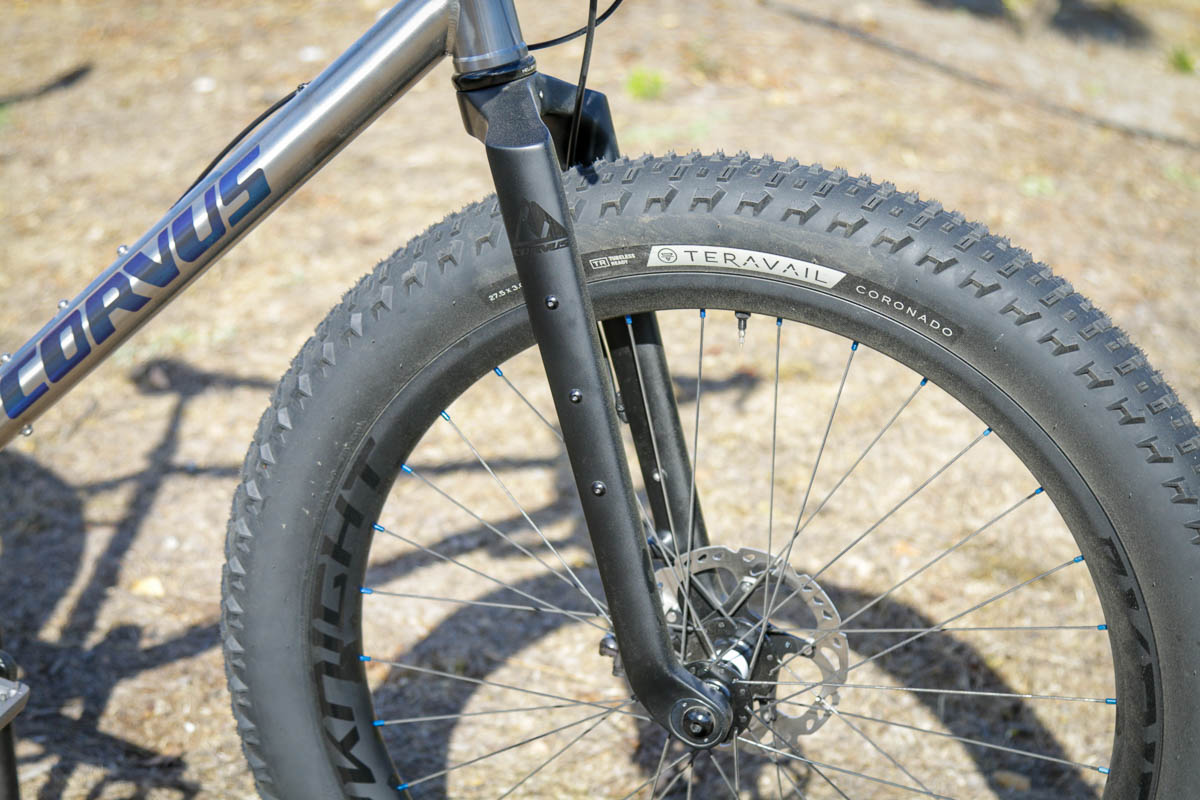 Up front, a custom fork was created with a 435mm axle to crown measurement and some clever features. 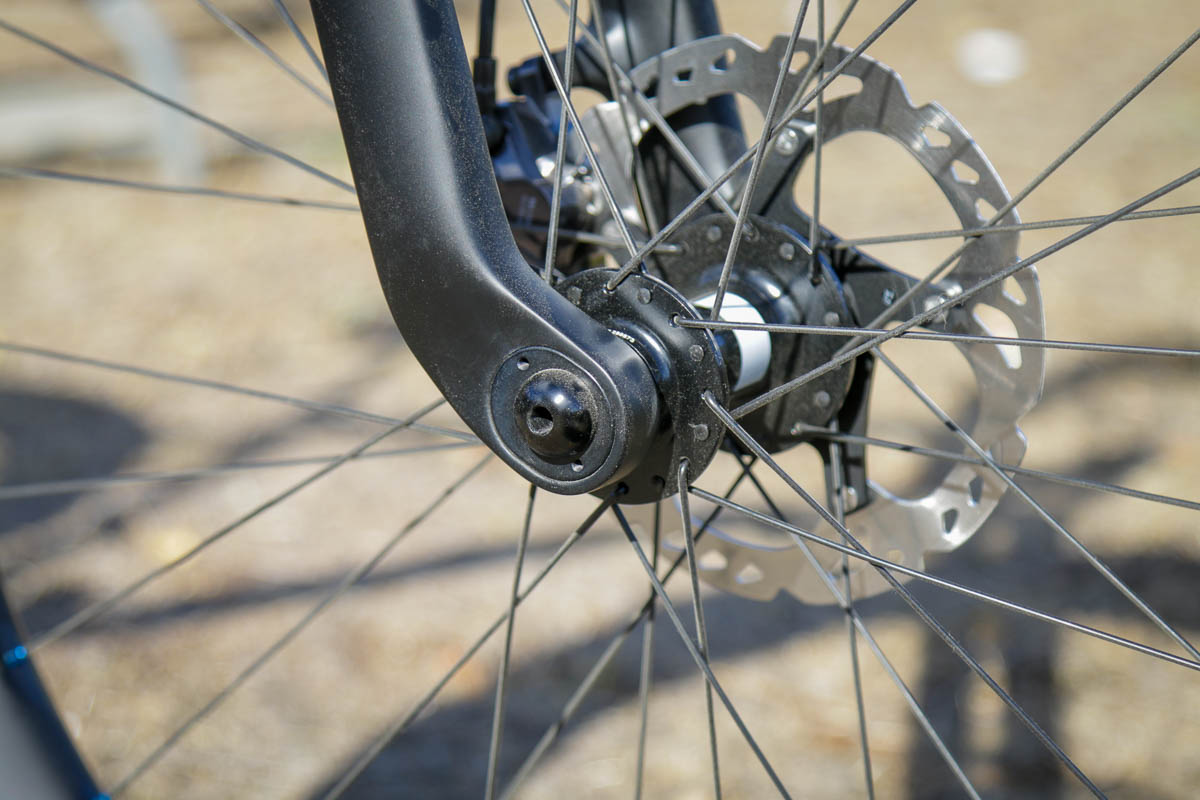 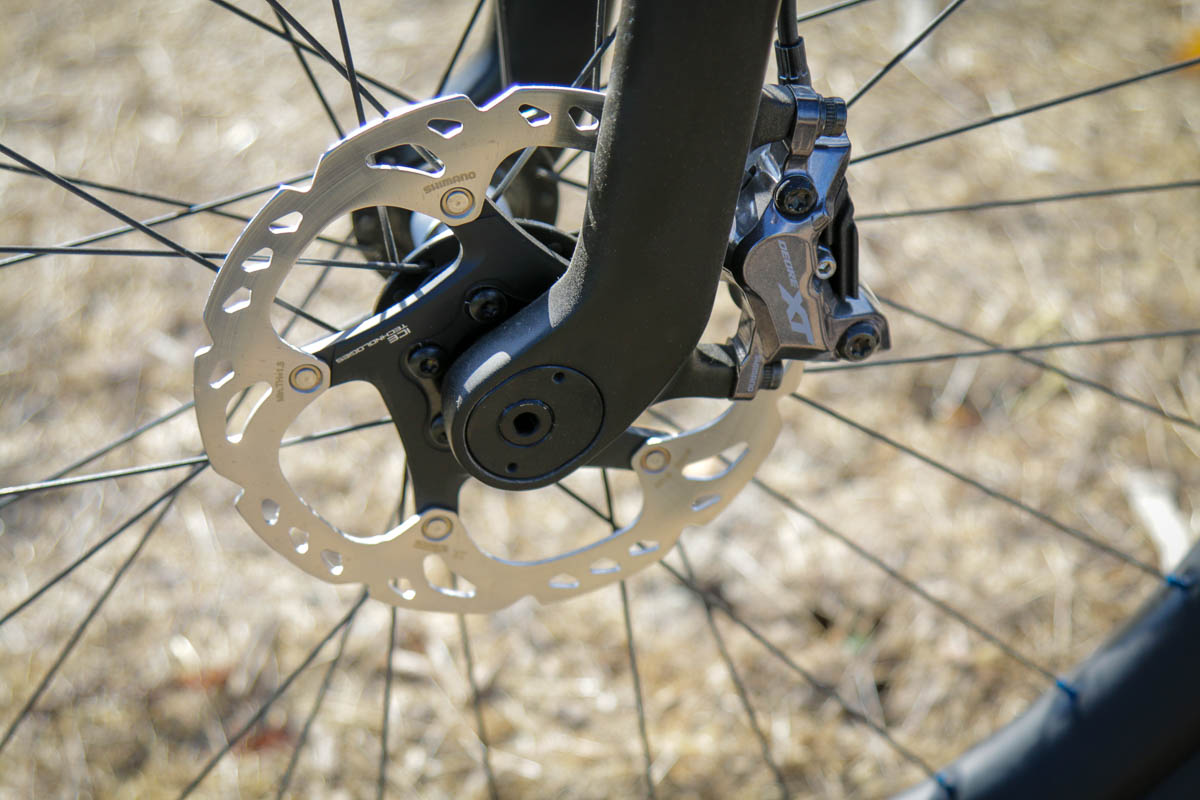 The flip chip at the axle allows for a 5mm adjustment to accommodate the difference between 27.5+ and 29″ wheels and tires, but it uses post mount brakes so that you can adjust axle position without having to adjust the brakes. There’s also internal dynamo wire routing, and three pack mounts on both sides for obvious cargo carrying reasons. Built to mountain bike specifications and Boost 15x110mm spacing, the fork matches up with the back end of the bike with Boost 12x148mm spacing. 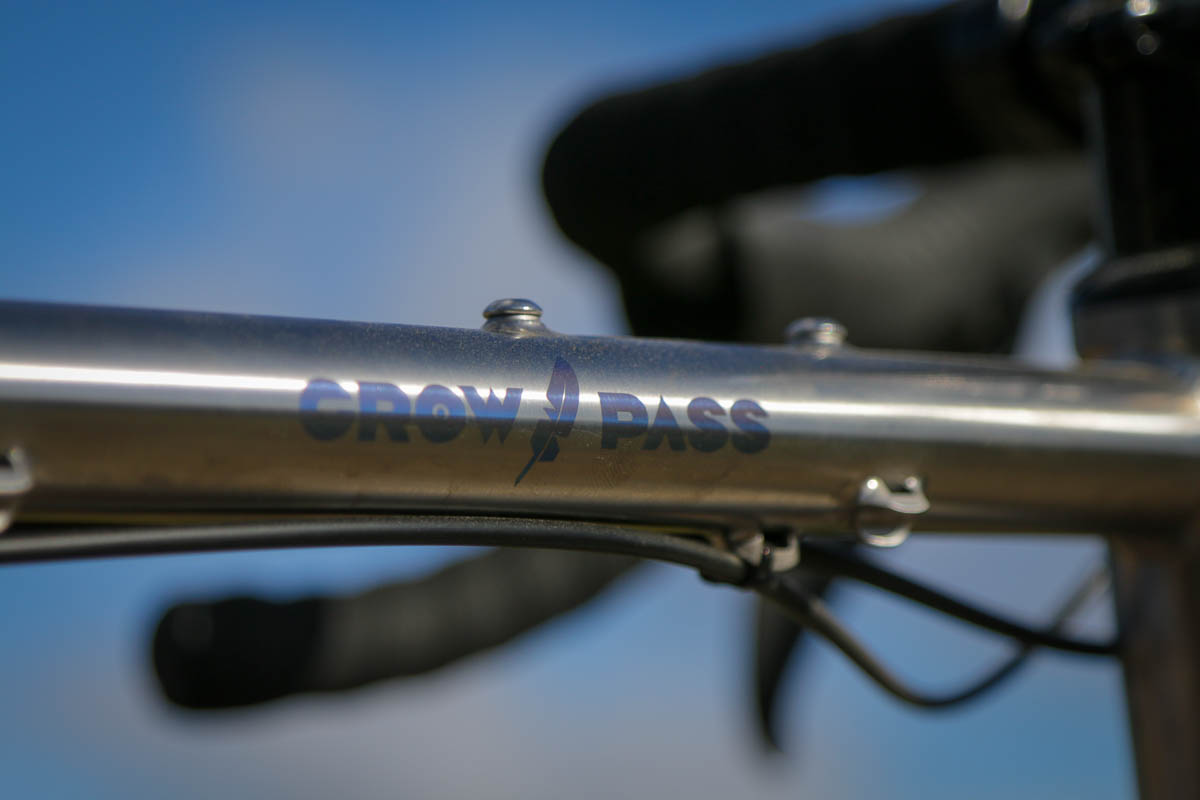 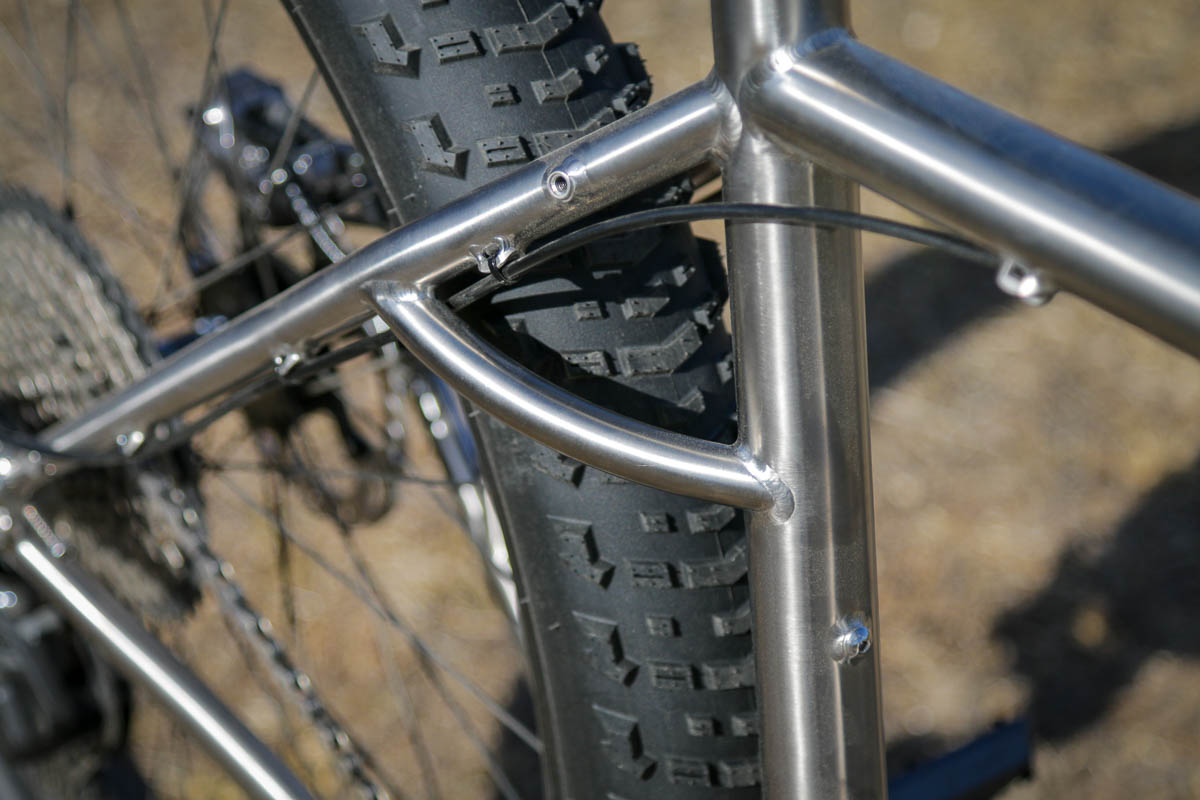 Because Corvus expects you to carry gear with the Crow Pass, each bike will ship with a custom Rockgeist frame bag. But what happens when you add a full frame bag to a bike? It gets hard to carry during challenging hike-a-bike sections. So Corvus looked to Whit Johnson of Meriwether Cycles who built the steel prototypes for Corvus. His Portage Handle design was added to the seat stay/seat tube junction to make carrying a fully loaded bike far easier. I used the handle while carrying the bike off for photos—it works quite well. 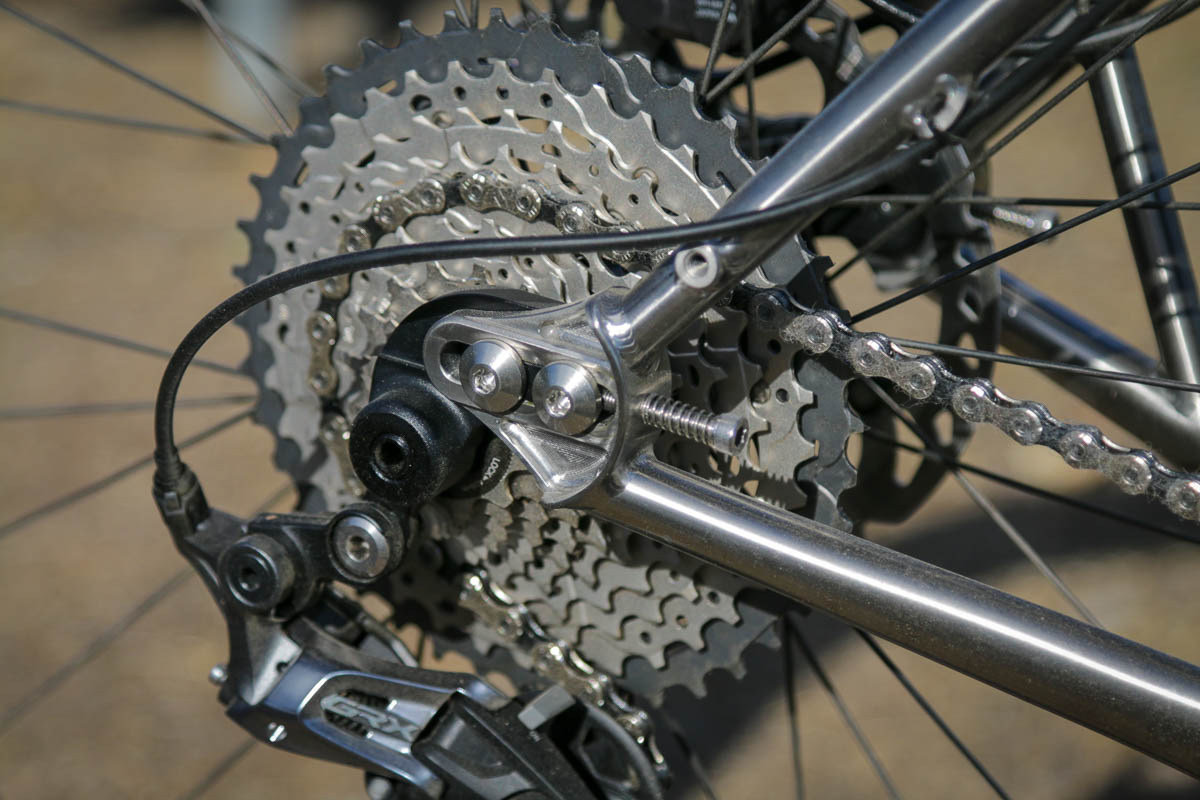 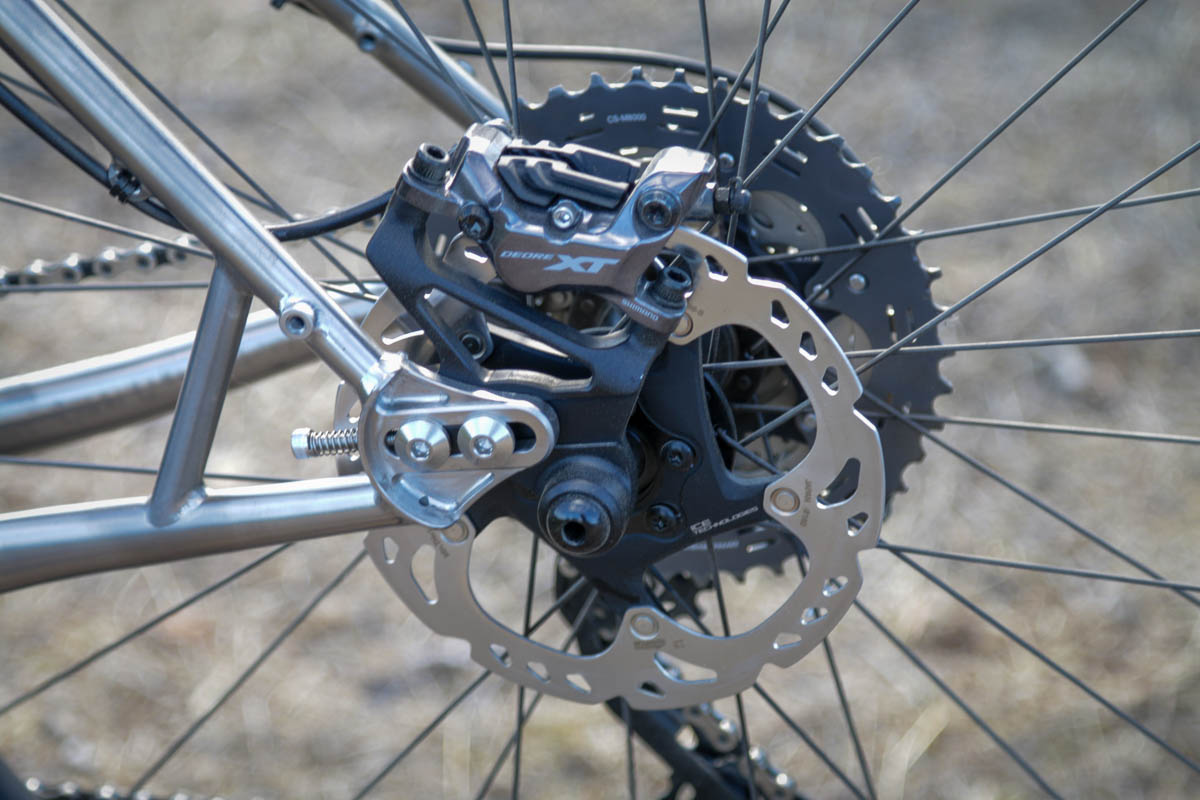 At the back, the Crow Pass features post mount sliding dropouts for multiple reasons including adjusting the wheelbase and single-speed compatibility. That could be a build that starts off as single speed, or the need to make your bike a single speed in an emergency in the backcountry. 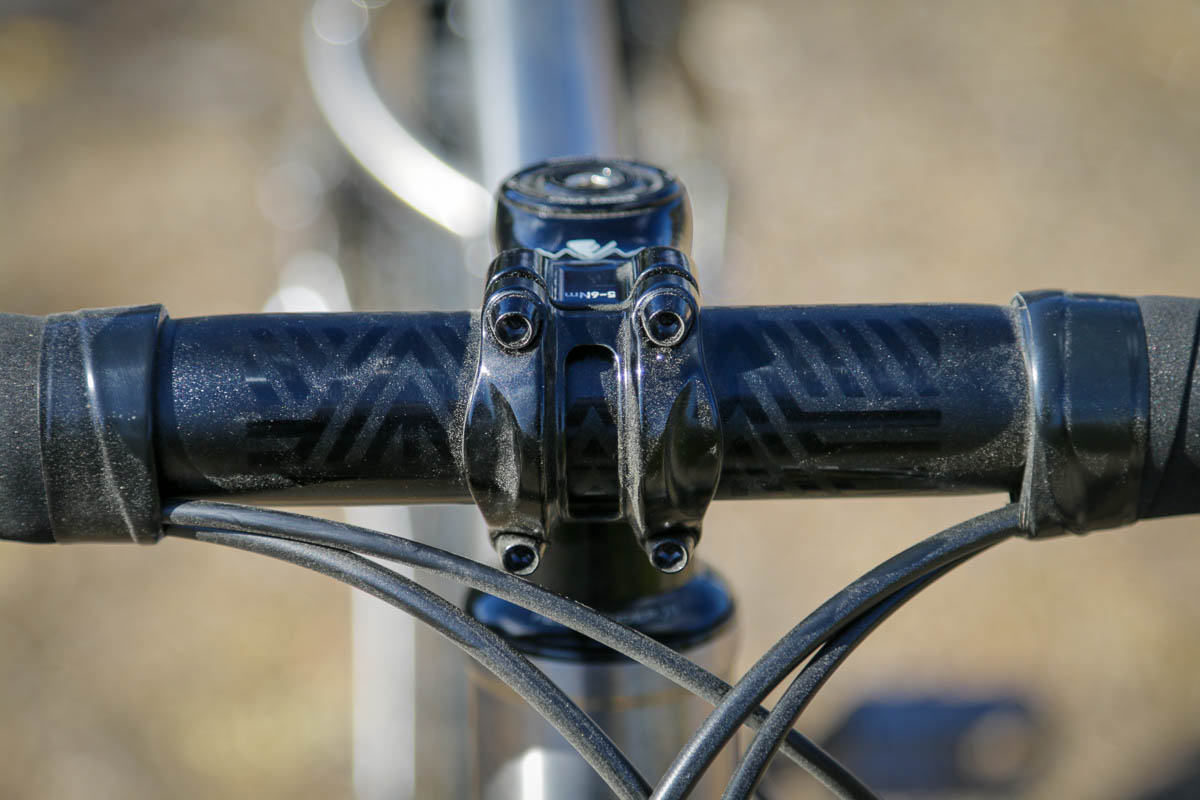 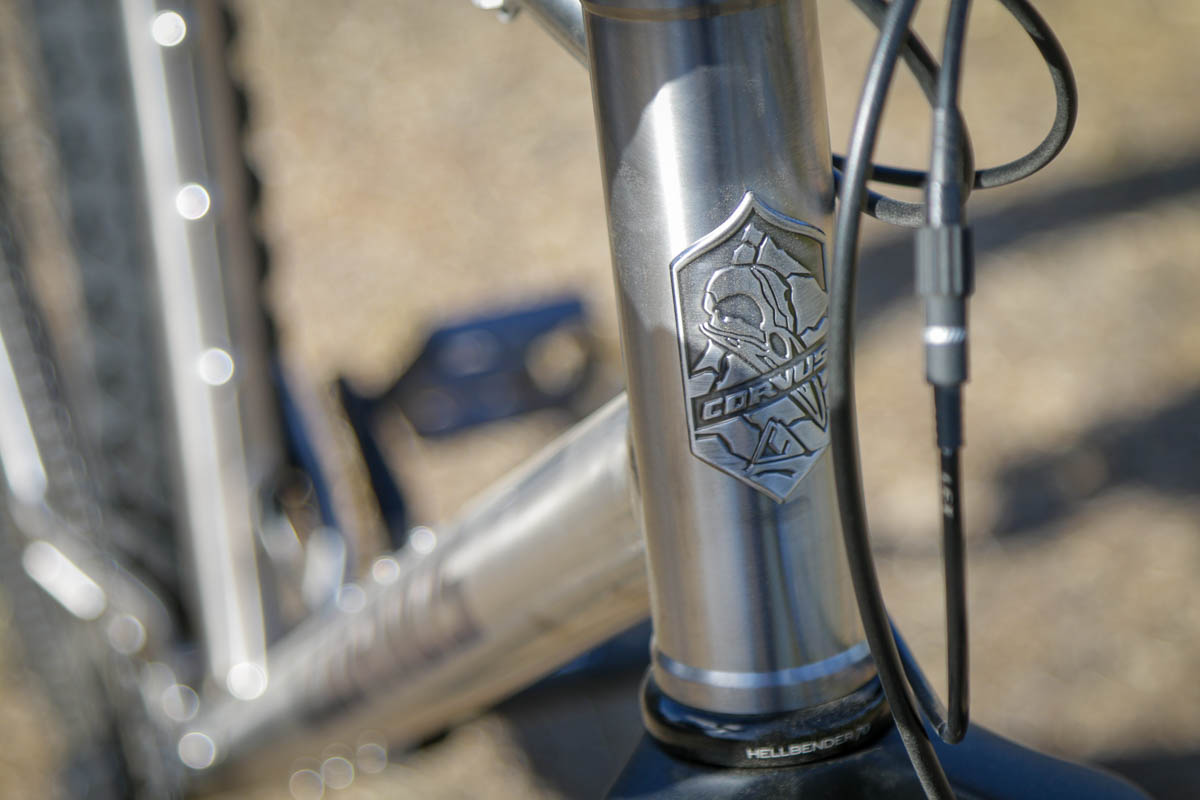 Dropper compatible, and equipped with rack, fender, and three pack mounts everywhere, the Crow Pass uses a 73mm threaded BB with a Cane Creek Hellbender on complete builds. For now, only 60 titanium frames will be available starting at $2600 for the frame and fork, and complete builds will be priced at $6500 which will include Santa Cruz Reserve Carbon 37 wheels and DT Swiss hubs. Corvus is hoping they’ll be available this spring. 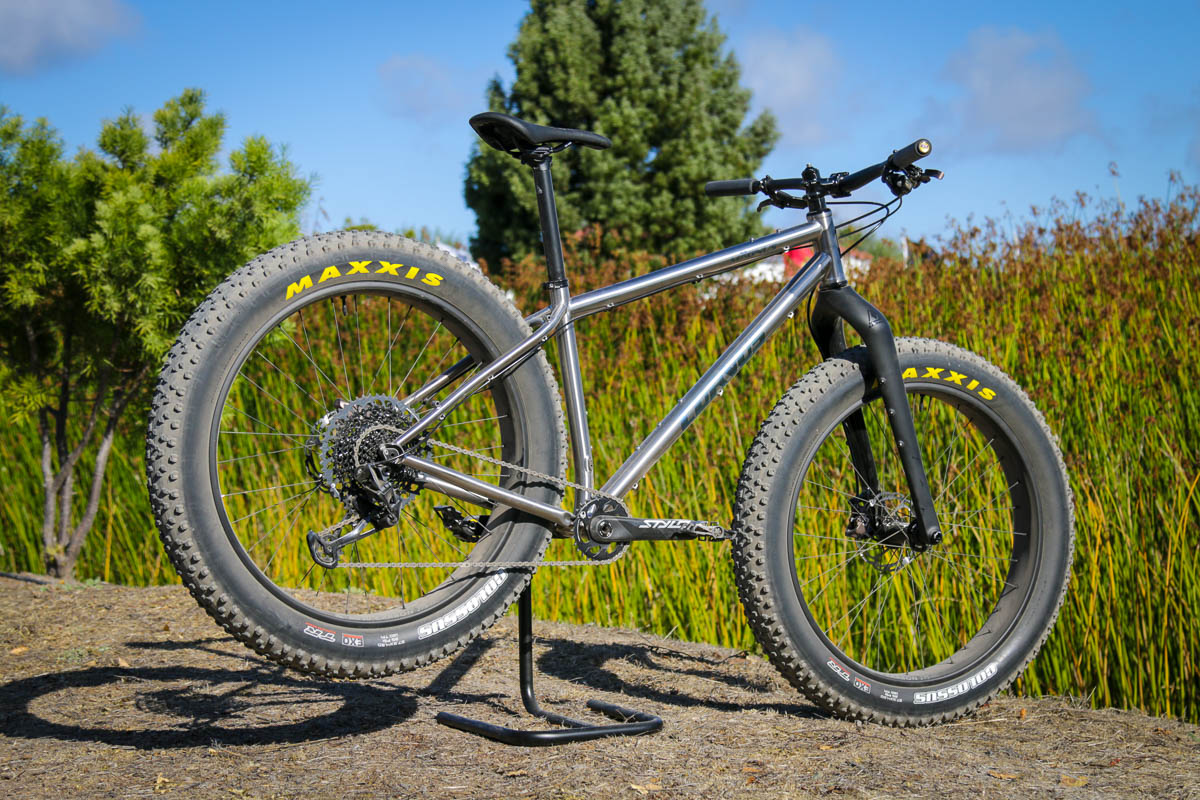 Fatback started with a titanium fat bike in 2007, and now Corvus is getting back to those roots with the new Magnus fat bike. Again limited to just 60 frames for the first run, the bike will include a 67° head tube angle, 74.5° seat tube angle, and geometry that’s truly designed around 27.5″ wheels and tires. 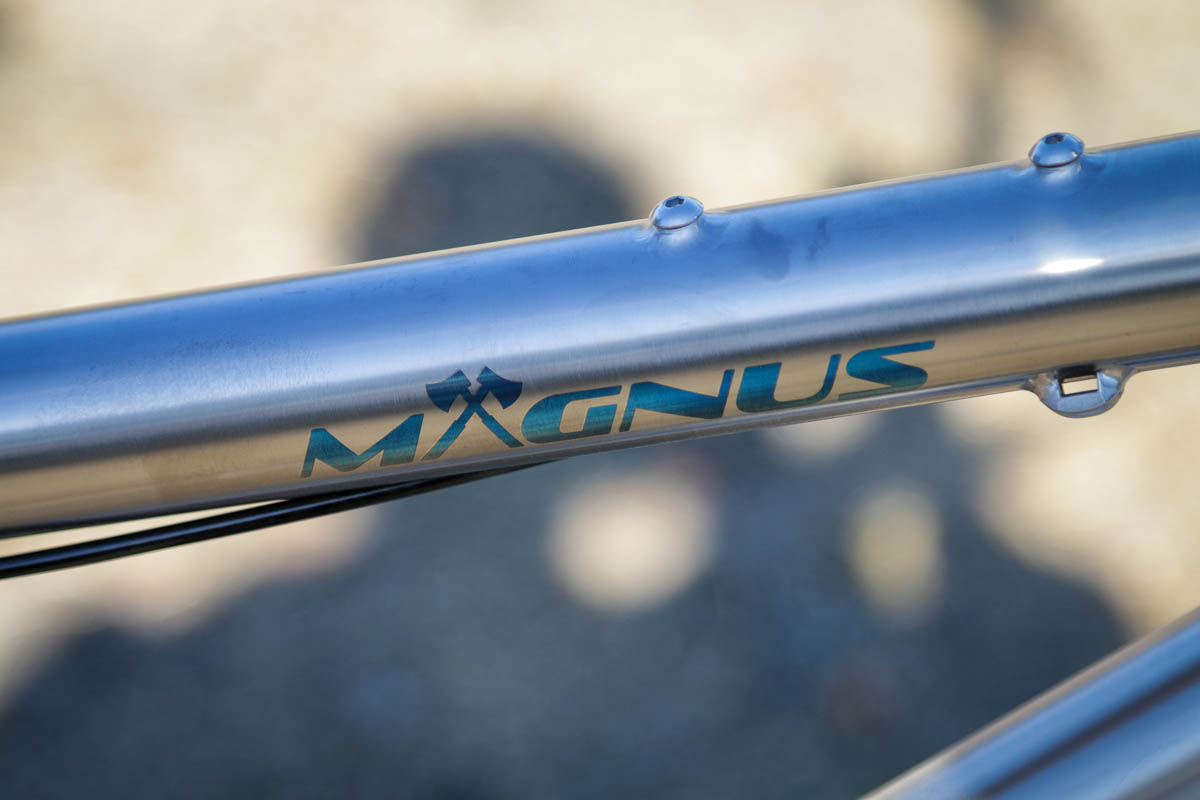 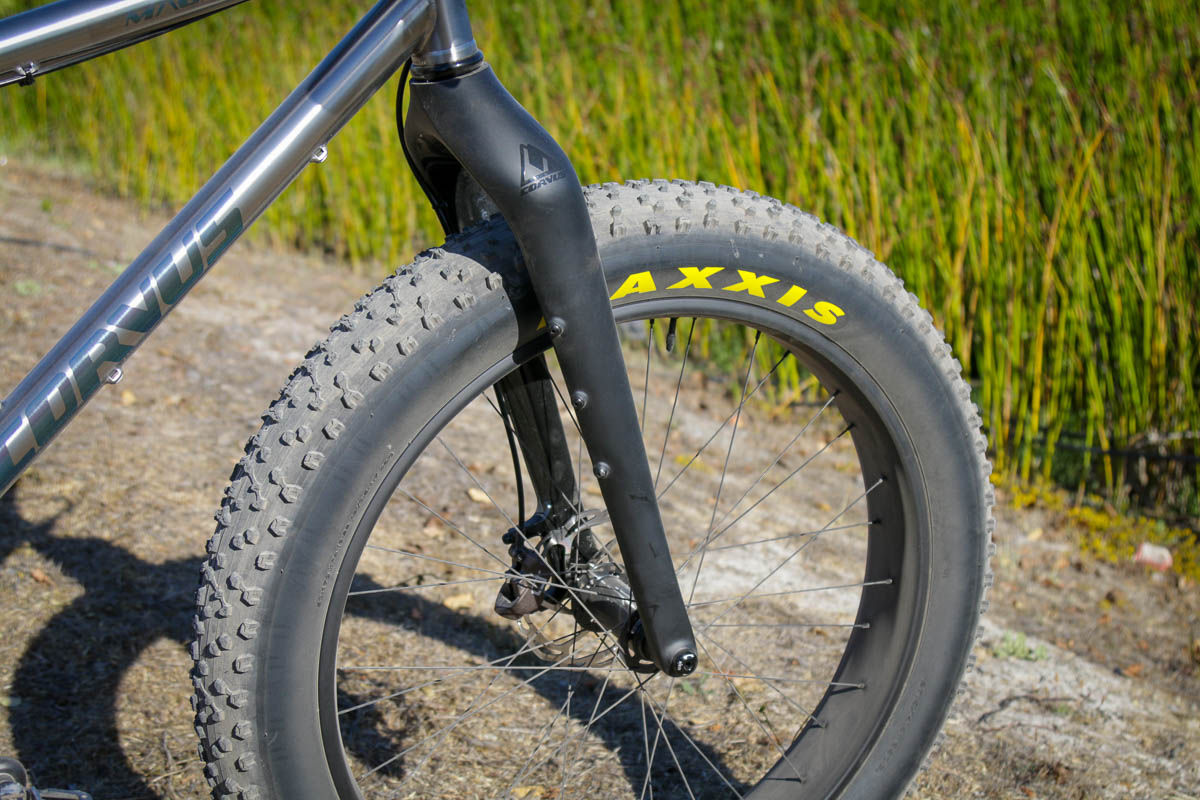 This one features the same carbon fork that’s been redesigned for the Akio (FKA Corvus), with a 505 axle to crown and 53mm offset. 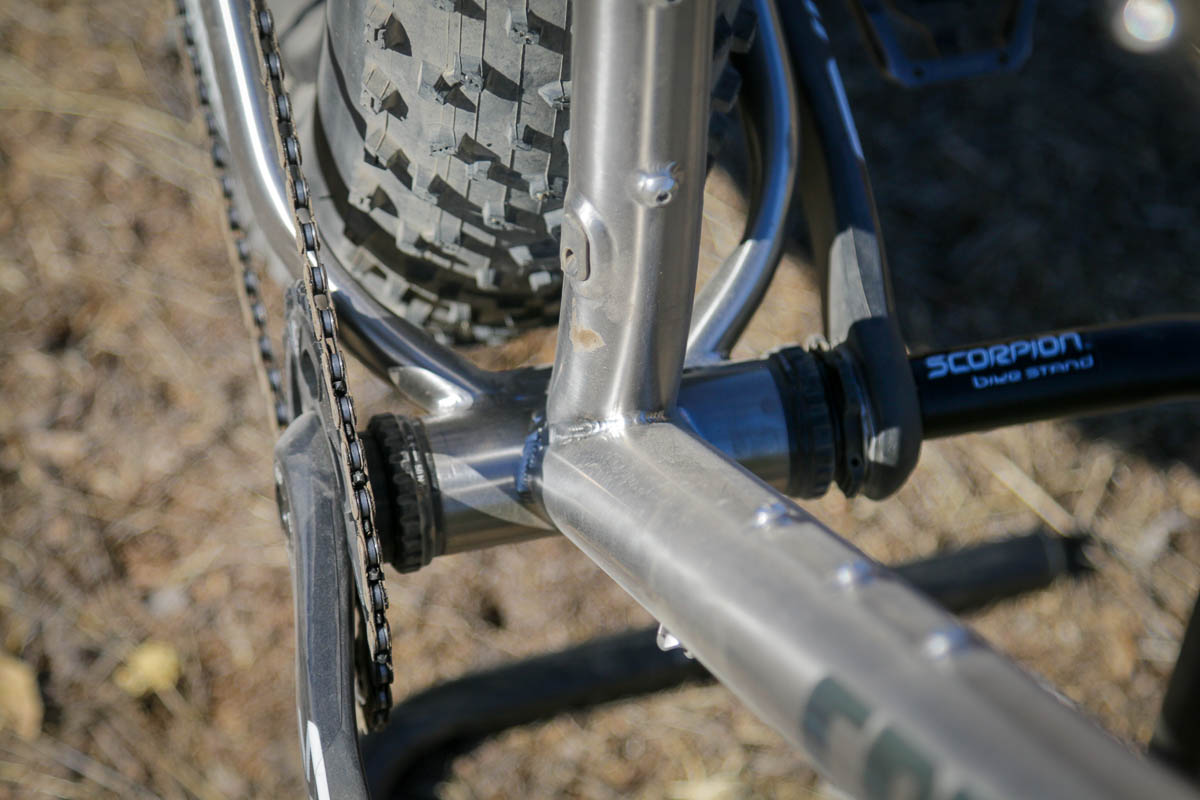 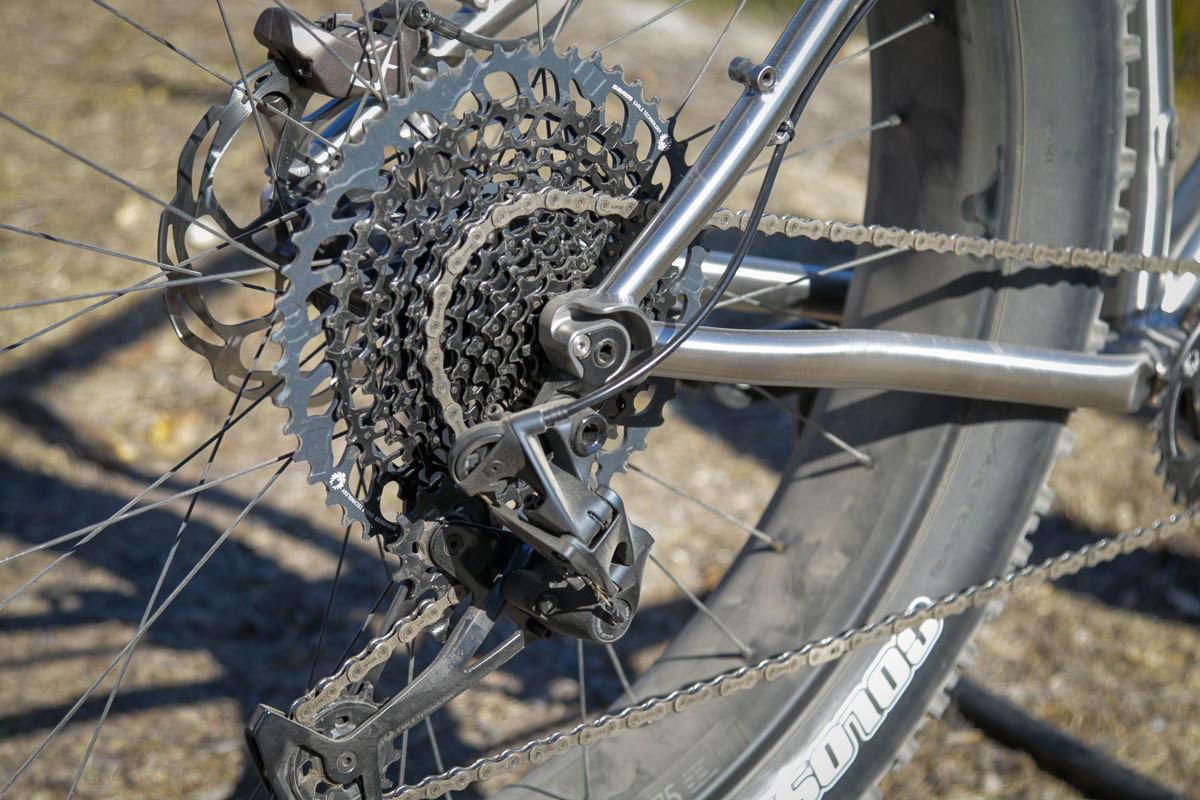 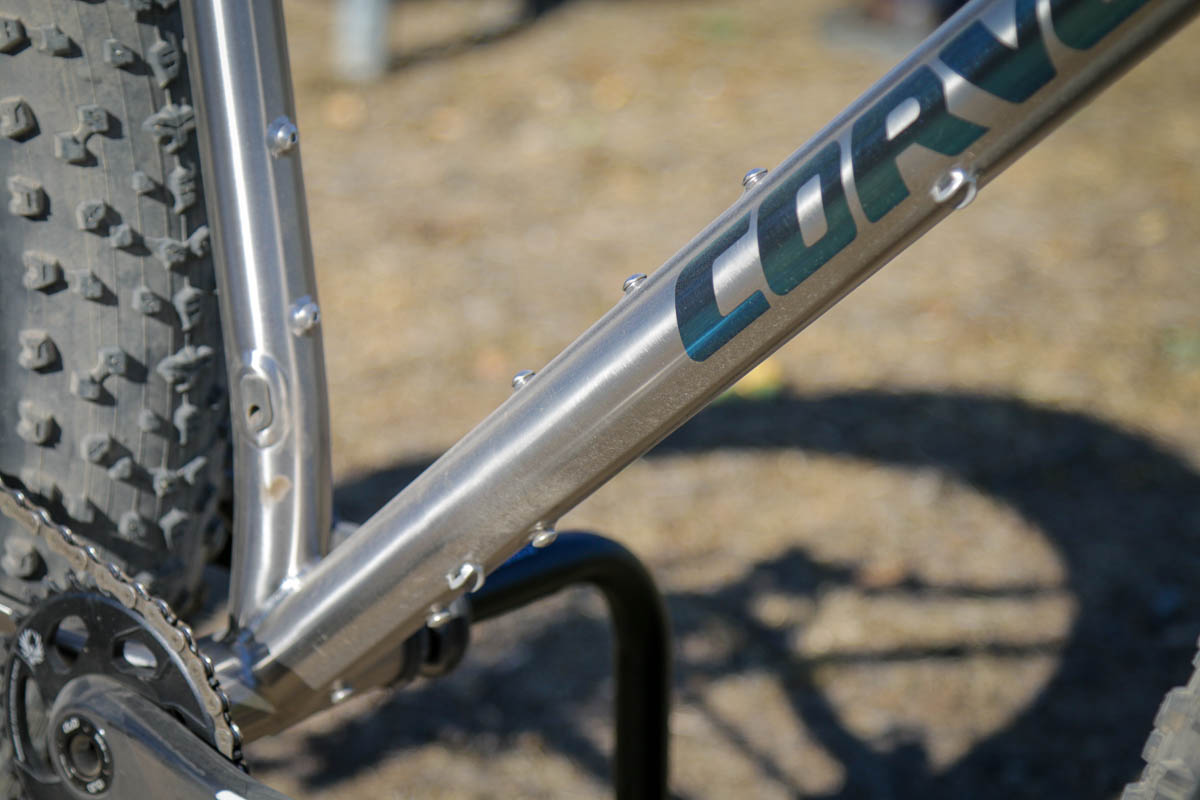 And since fat bikes need to carry gear as well, it features three pack mounts on both sides of the down tube, and top tube mounts, plus rack mounts and is dropper post compatible. A custom fit Rockgeist frame bag will be available, but not included like the Crow Pass. These should be available any day now.

Now with the whole company named Corvus, they opted to rename the former Corvus fat bike as the Akio. It too has been updated with all new geometry based around 27.5″ wheels. 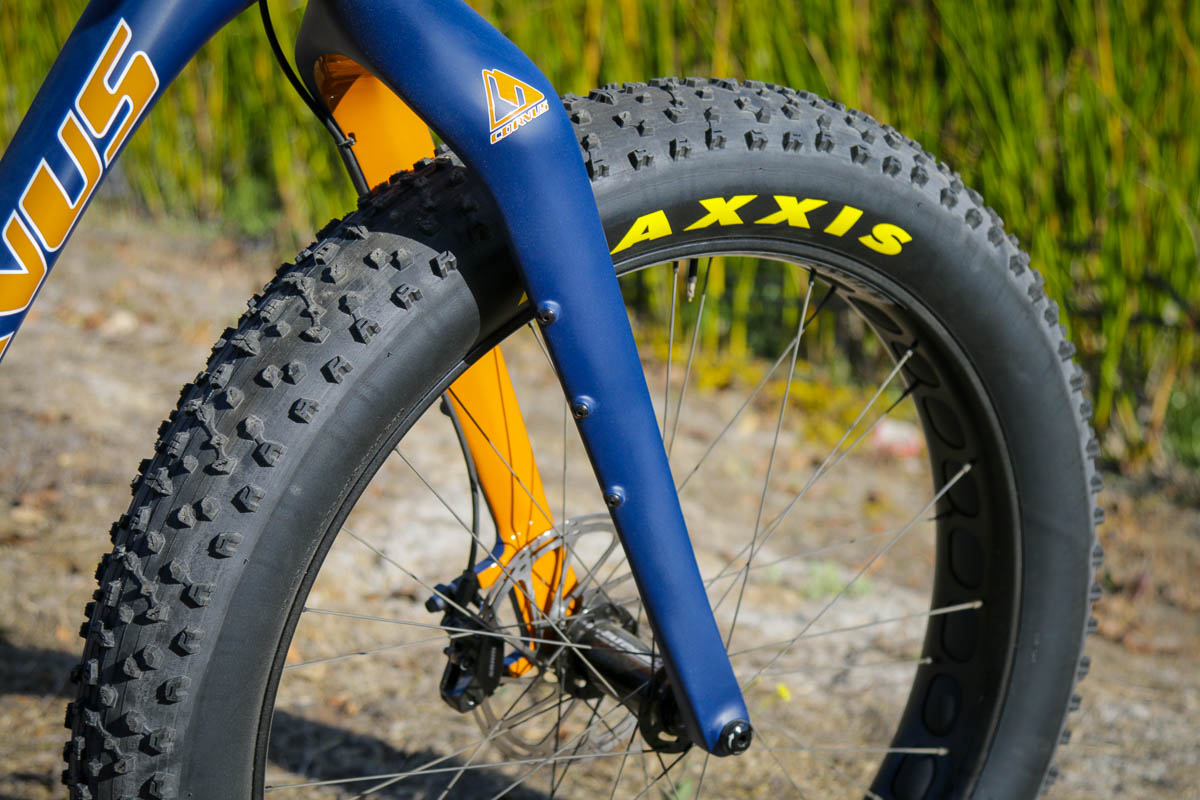 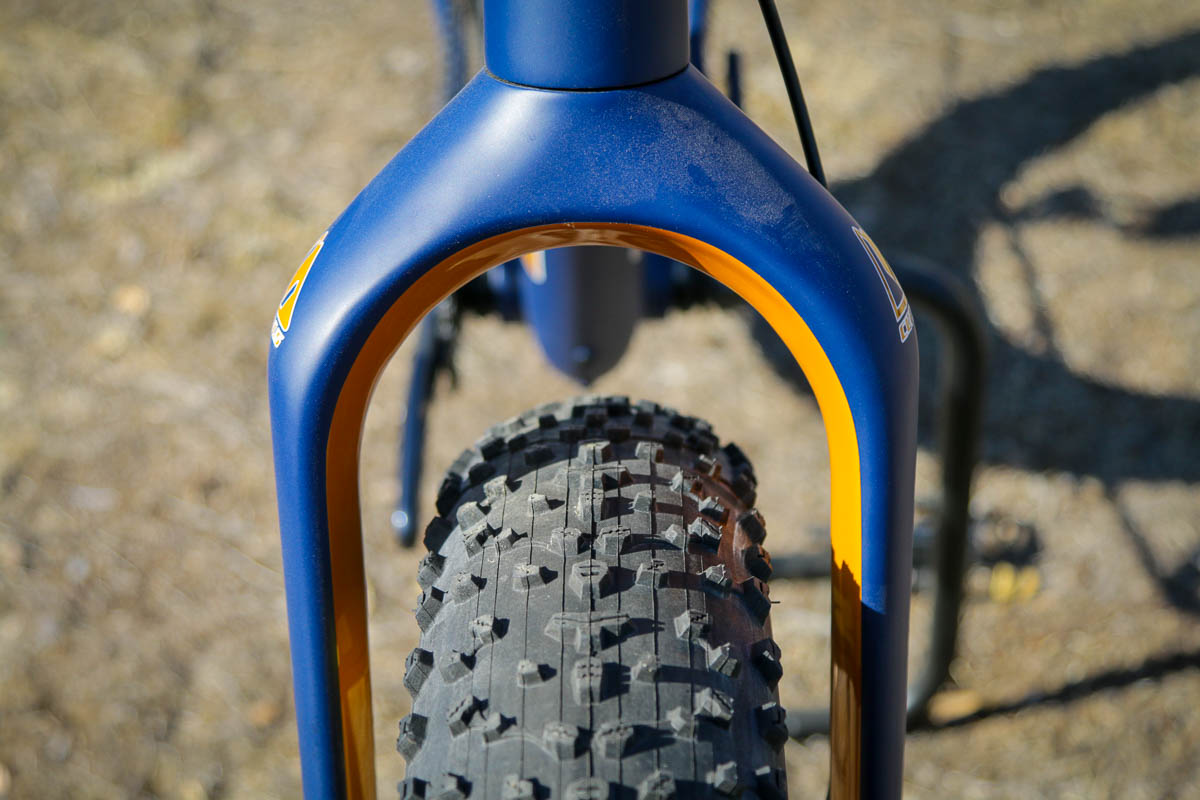 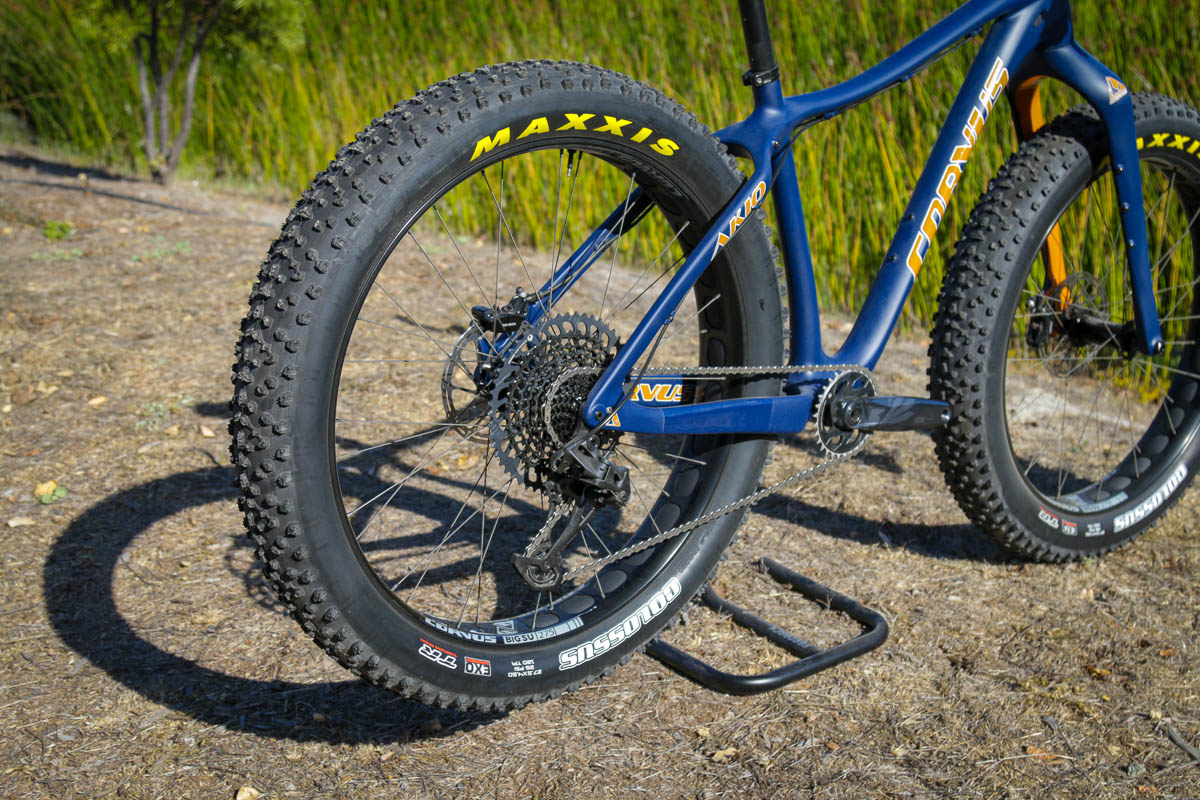 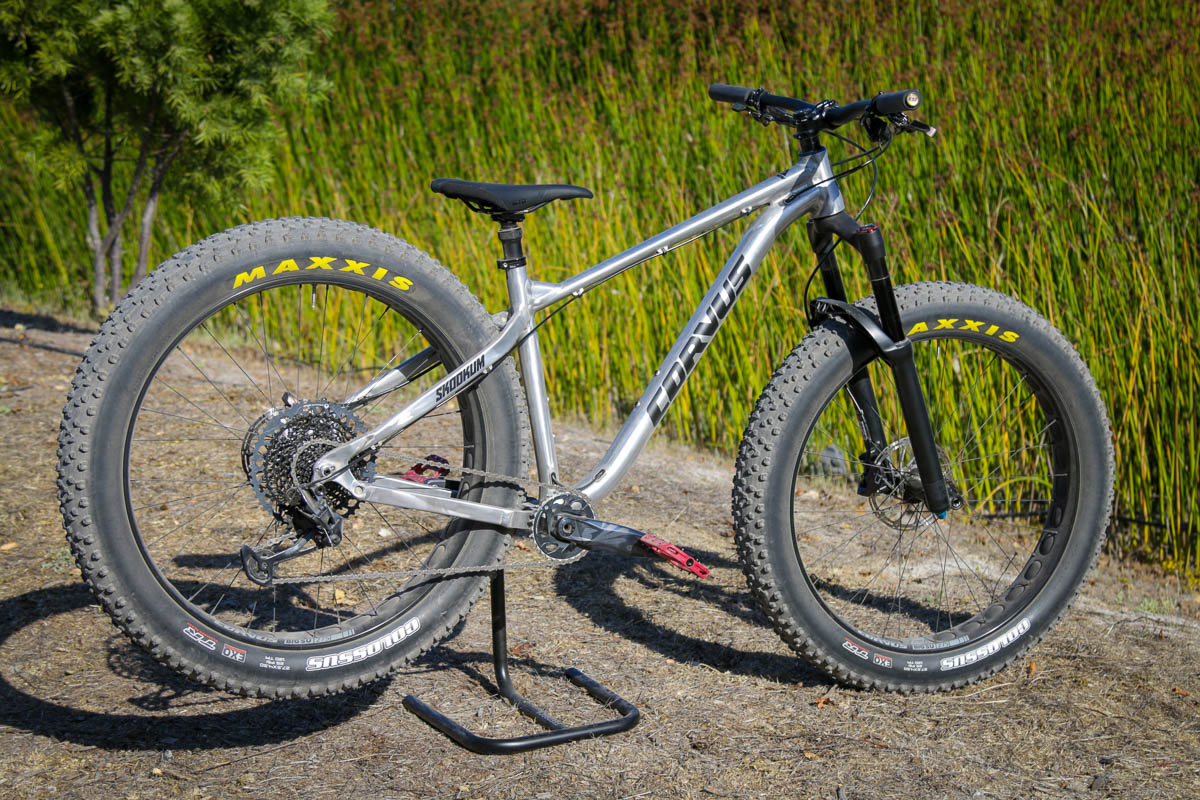 Not content with bikes meant for long distance adventure riding, Corvus is introducing the new Skookum AF. Here, AF might stand for aluminum frame but it also hints at the DGAF attitude that’s included with an aggressive fat bike design that’s just as comfortable hitting big jumps as it is monstering through powder. 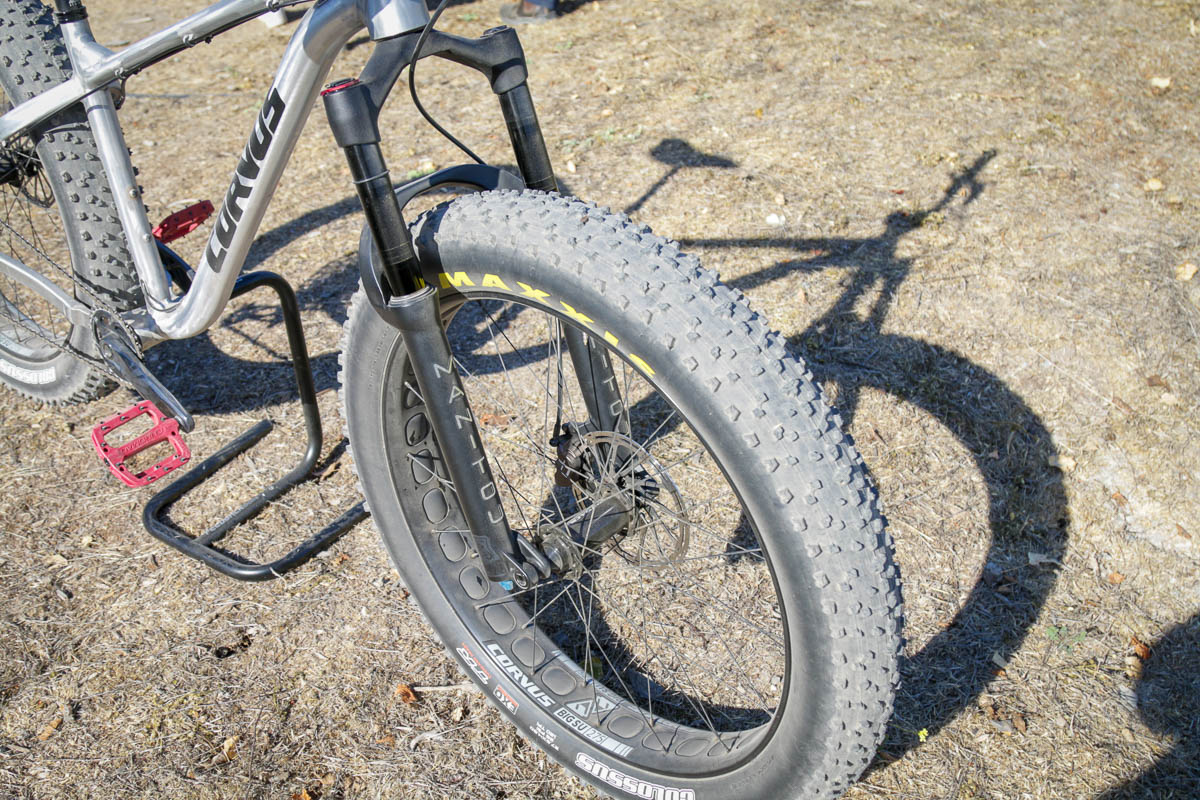 Designed around the Manitou Mastadon 120mm fork with a 553mm axle to crown and 27.5″ fat bike wheels and tires, the frame is slack and steep with a 66.5° head tube angle and 75° seat tube angle. 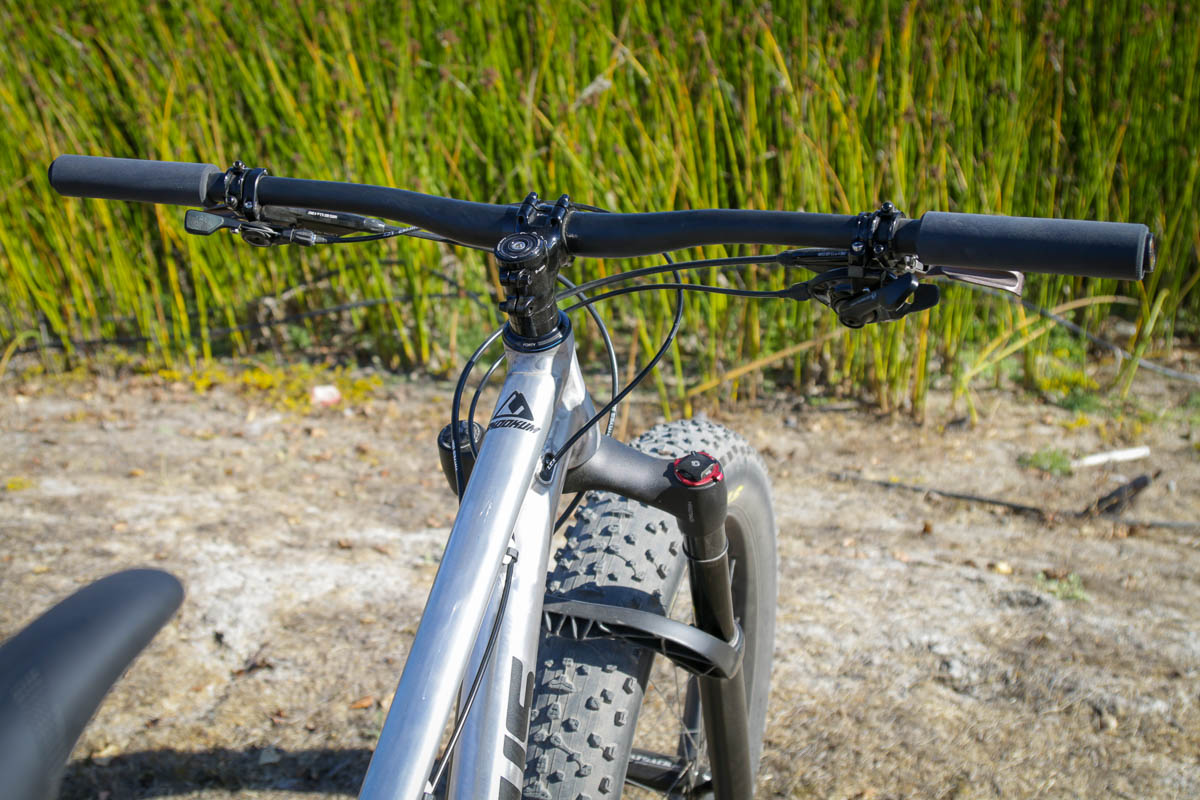 Of course, it’s also built with a long reach meant for short stems and wide bars. 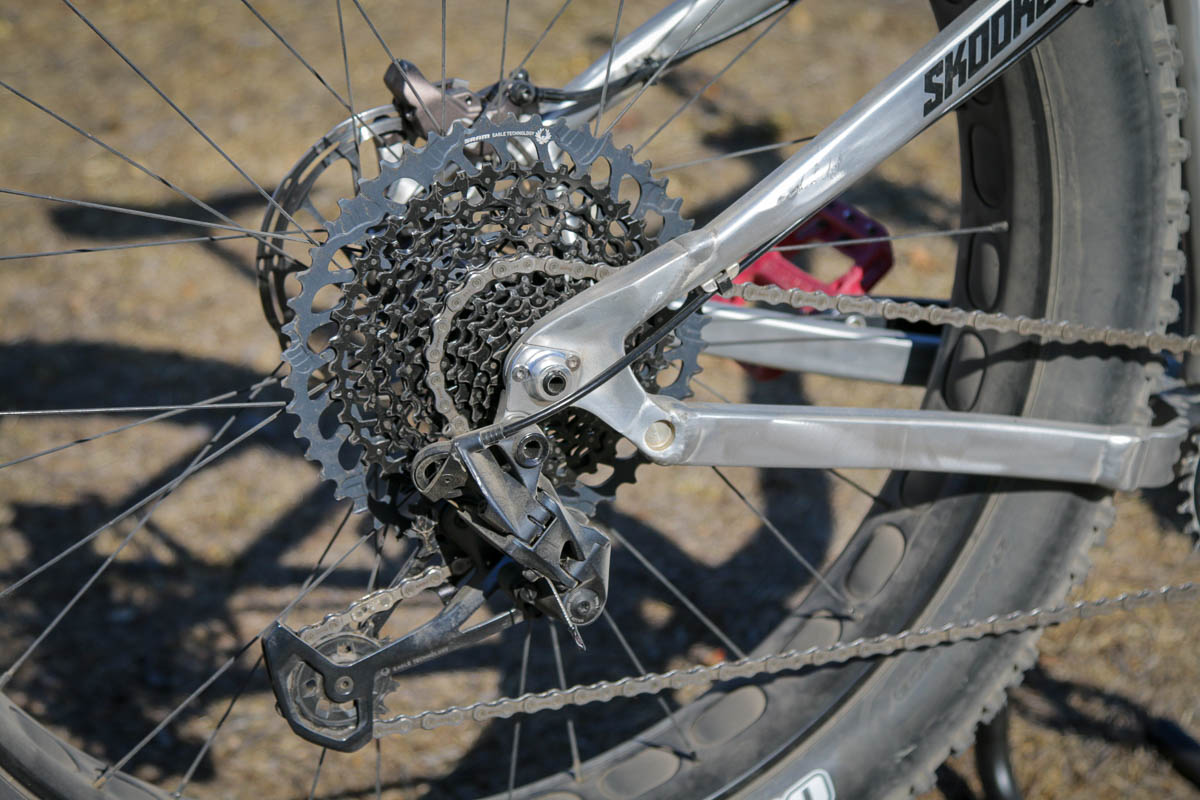 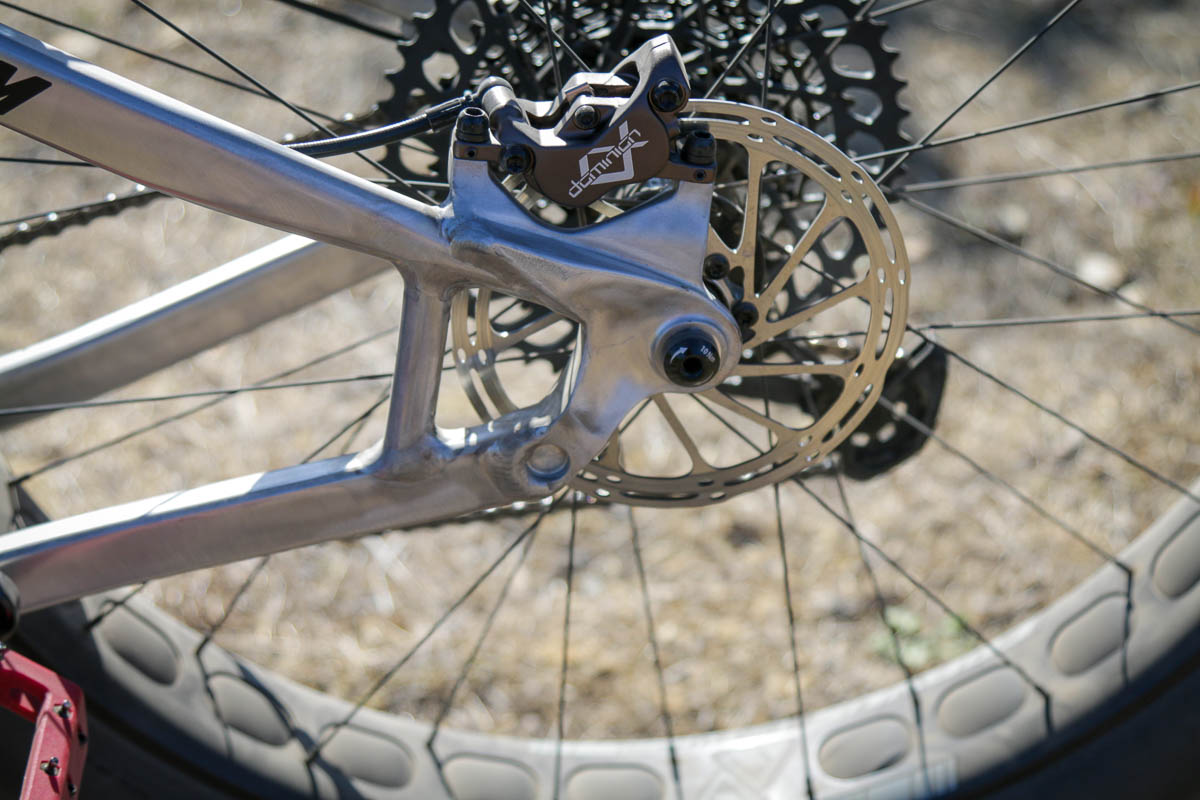 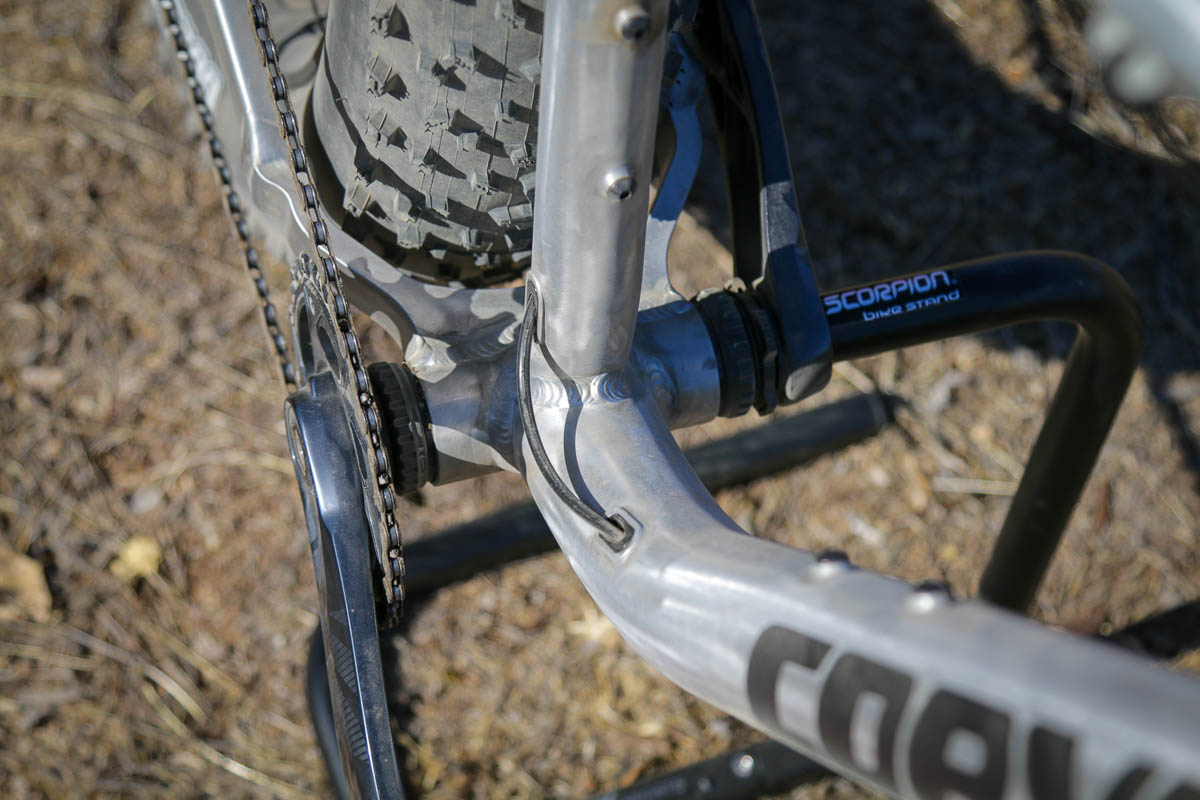 Running a 197 x 12mm rear and 150 x 15mm front thru axle spacing, the frame includes a 100mm threaded bottom bracket, PNW Loam dropper post as standard, and around 445-455mm chainstays. In spite of being aluminum, it will supposedly only weigh about 2lbs more than carbon, and it should be available this February. 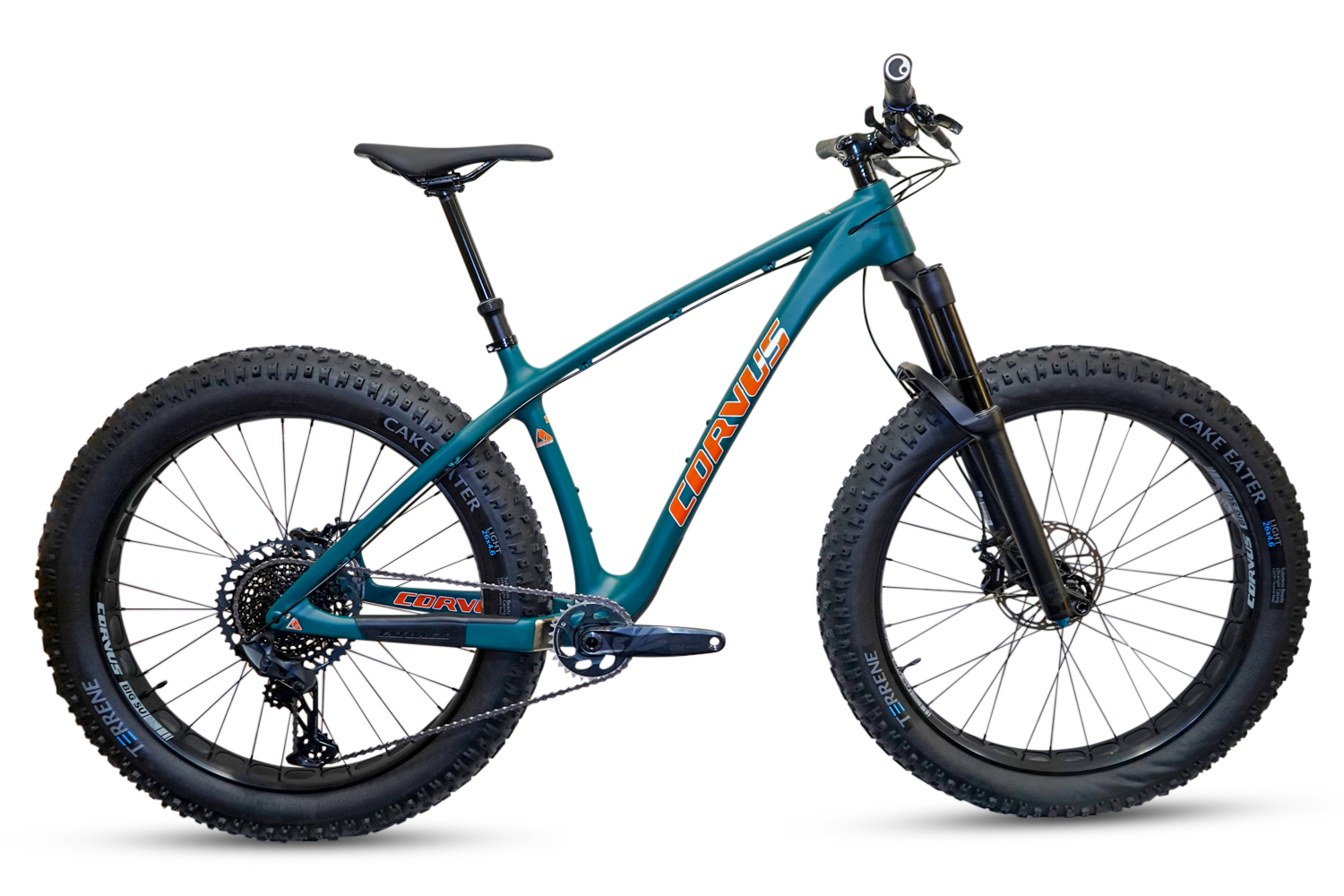 The only bike that isn’t new or hasn’t really changed, the Skookum Carbon is still in the line… for now. Still built around 26″ fat bike wheels and tires, this is the outlier in the 27.5″ fat bike wave. Corvus says it’s compatible with 27.5″ fat bike wheels and tires, but they’re honest in saying that it’s better with 26″. The Skookum Carbon is available now in a refreshed Camp Stove green finish.