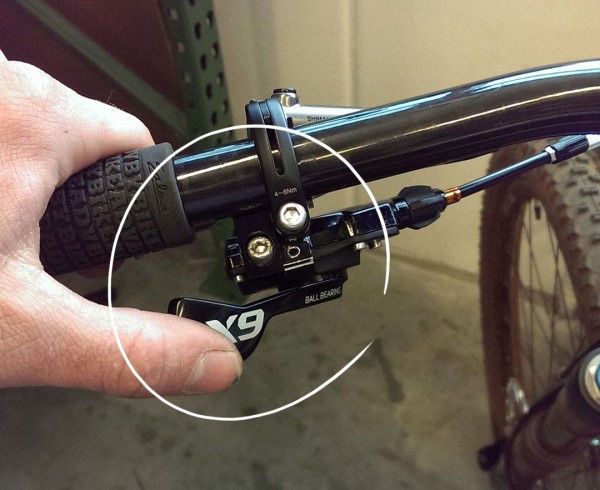 Perhaps more than anything else, dropper posts seem to be one of those products that riders are willing to tolerate some quirks for the overall benefit. Specifically, one of the biggest areas of improvement seems to be the remote levers themselves. Why else would there be so many replacement levers, adapters, and hacks to create something different to control the posts?

Anyone who has used one of the Specialized Command posts with their SRL lever can attest to the excellent ergonomics and function of a lever that closely resembles a shifter. Specifically, the lever is very similar to a SRAM shift lever, so why not make a SRAM shift lever into a dropper post remote? Problem Solvers likely isn’t the first entity to hack a SRAM shifter for a dropper post lever, but they are giving you the play by play… 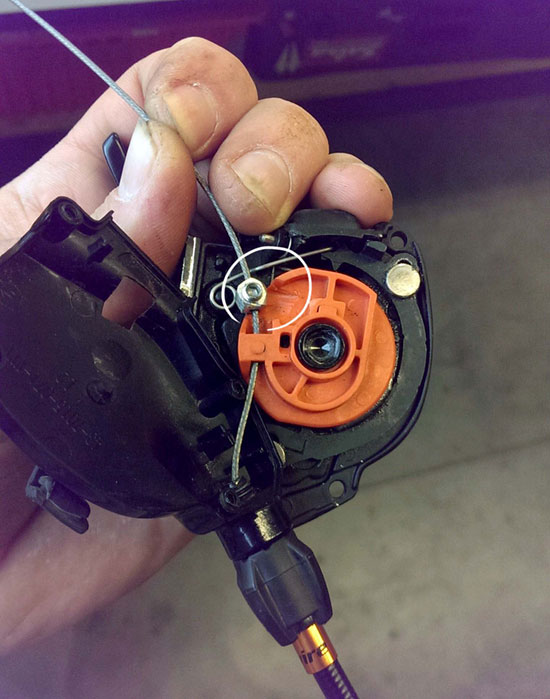 Far more than a simple plug and play, the SRAM lever hack is pretty complicated and involves modifying the internals permanently. This could be a great use of a broken shifter that still has the parts needed for the hack, or simply for that discarded front shifter that you’ll never use again, right?

One crucial element of the hack that you’ll have to supply yourself is the cable knarp to anchor the end of the cable in the shifter – if your dropper posts requires it. Some posts anchor the cable in the lever, in which  case you won’t need the Knarps. But if your post anchors the cable in the head of the post, Problem Solvers uses the Odyssey Cable Knarps which can be found many places online for a few bucks and probably at your LBS.

For the full step by step instructions, head over to the Problem Solvers Blog.

I know a guy who has made an enduro type cyclocross bike and uses the left Sram road shifter to operate the dropper post. It’s awesome.

I also know a guy who did that with a Sram road shifter by removing a pawl. Would be cool for BR to do a hack on that as so many CX riders are going with droppers and 1x now.

It’s funny because I knew of people doing this with their old front shifters as soon as dropper posts came out. It really doesn’t take a rocket scientist to figure out you can just remove the pawl and your shifter becomes a lever.

I just started using the 9point8 dropper post with a finger lever. It is kind like a small brake lever above the normal brake lever. I was not too sure at first but now it is by far my favorite. I already ride with one finger on the brake, I just move it a little. The rest of my hand stays put as it always is.

Really cheffdog? I can’t tell if you’re being sarcastic….

I may be wrong but I’m pretty sure there are very few CX riders (people racing cyclocross and going fast) on the dropper bandwagon.

I don’t even know anyone who rides a cyclocross bike on trails regularly (we’ll call them CX BIKE riders, not CX riders) that uses a dropper as most cross bikes are 27.2…

Dual-barrel-adjusters! (For a joke, tell your buddy to turn the left one two turns CCW, and the other two turns CW.)

I’m more interested in how they got a SRAM shifter to attach to a Shimano brake?

Sure, I know there are a few available. Doesn’t change the bulk of the argument though. And regarding the Lev, assuming we’re not considering the internally routed version which most cross frames aren’t outfit for, the way the cable comes from the collar isn’t very conducive to most cross bikes’ designs (big main triangles) as you’ll start running into clearance issues with how far you can insert the post.

Regardless, all I was saying originally is that the implication a lot of cyclocross bike riders are using droppers doesn’t seem to be accurate for the time being. Trust me – give me drop bars, a short TT, 40c tires, and a dropper and I’ll be wearing a sh!t eating grin, I’m just not seeing it as a common thing as of now!

I would love it if I could use a SRAM grip shift to operate my fork lockout. That would make for a really slick cockpit for those with 1x setups 🙂

Done that with a defective X.0-shifter. Works like a charm with my LEV. Why not use a standard shift cable with the nob, instead of this clumsy knarp?
BTW you don’t need an extra barrel adjuster in line with the one built into the trigger.

I’m using an unmodified Shimano front shifter (11 speed) for my KS LEV. Our local mechanic just attached the cable and it works like a charm. Only took a few minutes. No real “hack” required.

@Brett – Problem Solvers make the MisMatch for attaching SRAM shifters to Shimano brakes. I have used it and a competitive product from TrickStuff call the Matshi for this purpose. The Matshi is the better solution.

How is this news? Its been taught by Gebla for some time now. http://www.rohbox.com/Rohbox%20Technical%20Manuals/ModBrifters.html

All Problem Solvers does is steal unique ideas came up with by little guys, and then QBP commercializes them.

Its about time Problem Solvers updated their cobweb blog.

I like Problem solvers, but a lighter and more simple version has been around from Specialized for a while now. http://reviews.mtbr.com/wp-content/uploads/2014/07/Specialized-Enduro-S-Works-dropper-post-lever-1024×682.jpg

can you make this work with the rock shox reverb post?

@Moar Cowbell thanks for the link. Just mod’d my Sram Red shifter so that I can run a KS Lev Integra. I’m gonna get so rad now that it’ll hurt.

@Shirley Kroschek – nope. Reverbs use a hydraulic remote. This can only be done with posts that have cable actuated remotes. Pretty much everyone BUT a Reverb.