The Felt Outfitter has been a pet project of Jim Felt for about 5 years. He’s a fly fisher and bow hunter and he and his son always carry in all their gear for days in the woods at a time. They set up a base camp and hunt and fish from those remote wilderness locations. When Felt started making fat bikes and e-bikes, a lightbulb went off.

The Outfitter can haul a trailer with 60-100 pounds of gear (this one’s a modified BOB trailer made to fit a bigger wheel and work with fat bikes). They’re working on their own trailer, though, they’re just not ready to show it. Look for that sometime later next year.

In the meantime, check out the details below… 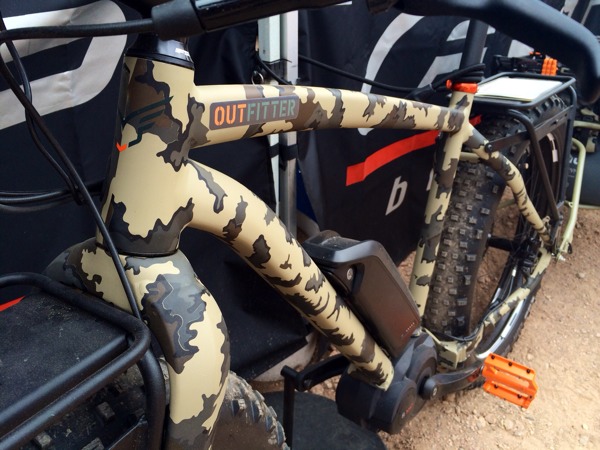 The bike is a Kuiu-licensed camo-painted version of the Lebowsk-e pedal assist fat bike introduced this summer. It’ll be available first of the year. Pricing will be around $5,000 to $5,500, they’re still finalizing. Felt said he wants it to be just below what hunters would spend on a quad, as more outdoorsman than you’d think are willing to use something that’s not gasoline powered if they could still get deep into the woods. Jim and son, who has an identical bike, plan on riding 13 miles into the woods to elk hunt this fall. The light has a removable green filter, which lets you ride out to your hunting stand without the glare that could scare off the prey or mess up your night vision. For those of us just hunting for a good time, the new Brühaul long tail e-bike cargo bike helps take the party with you. Or your kids. Or anything else you need. Back end is wide open to be configured to meet your needs. Under the seat pad is a cut out for a baby seat. Foot rests and stoker bars are options. many of the hunters l know are too fat to ride and or cheap to ride a bike like this. good concept but l would be surprised if they sell some

Just put an off the shelf gas powered electric generator in the trailer, and off you go.

It’s good to hear that another trailer is in the works.

We’re proud to be a small part of this project combining Felt’s 12mm thru axle equipped fat bike to a standard BOB Trailer attachment. Great execution by Felt on a purpose-built outdoorsman’s dream rig!

The Robert Axle Project
12mm Thru Axles for Trailers and Trainers.

Maybe they should stick to riding rather than hunting elk…

I want to chase down a deer with my fat e-bike so bad… seriously though does the price include the trailer?

Love it. I’m a hunter/fisherman and would totally rock that.

“…as more outdoorsman than you’d think are willing to use something that’s not gasoline powered if they could still get deep into the woods.”
And blame Felt for poor battery life because the use the battery full time. And darn, why put pedals on this thing then it’s got a motor!
I can hear it now. I also agree with scotty on the trail advocacy issue.

I can see this as an alternative to quad so many outdoorsman use today.

It will be quiet. We all can agree that is great benefit to compared to a 4 wheeler.

It will have lesser footprint (carbon, trail impact etc.)

I can see trail and back country area advocacy might need to think about ebike future impact. If it can cut down on 4wd and gasoline motorized off road vehicles finding a place for them to fit is a forward thinking.

As for designated wilderness areas. I am in the camp keep it to foot traffic and hoof power.

Not all outdoorsman are fat and only care about how much beer we can bring along. In reading many mountain bike and fat bike promotions many would draw conclusions about mountain bike enthusiast.

Some of us are getting older, have physical issue spopping up. I would rather look to an ebike than a quad to help me get to back country fishing and hinting than 4wd or a quad. I value peace and quiet.

The only bummer thing about bike-hunting is you still can’t go in the bonafide “wilderness” areas. So you’re stuck riding atv trails with all the yahoos and lose the advantage of being able to travel quickly and quietly in less traveled areas.

Feel to come sit on my deck and help cull our overpopulated elk herd (yes, it’s a real problem). I’ll go ride the fat bike (no trailer required) and expect elk-steaks for dinner when I get back.

I don’t understand the negative comments! Not every hunter or bicycle rider will necessarily want this bicycle, but isn’t it great that we have the technology, the innovators, and a company willing to make this a choice? And thanks to Laura and Russ for sharing this kind of information on your site!

Wow, just saw the Outfitter. I’m really excited to see something that fits the needs for the advid outdoorsman. I fly fish, bowhunt and duck hunt, and this is an anwer to my prayers. I support feeding my family natural, organic wild game, and this bike will give me an opportunity to reach some of the unreachable areas, like base camp and still stay fit. Can’t wait to own one.

This is the first rig I actually consider taking into the woods on a hunt. There are loads of places in the east/midwest that this rig would help get you nearly all the way in to your stand site. Not working up a sweat getting there was my issue with the Cogburn. Electric assist is the answer. But I’m still going to be walking for a long time. My wallet contains about $4850+ less than it takes to buy one of these. Have fun, affluent hunters!

When going back in 13 miles, I would think you would consume all the 60-100 lbs in gear alone. Where are you putting all the meat? Multiple trips? seems it gets you where you wanna go but not thought out on the possibilities when you actually down an animal.

I hunt a lot of single track, but like most great hunters, I don’t eat what I hunt very often. With this rig I can expand my hunting interests…….. I do own a BOB IBEX trailer though- very nice accessory for trail maintenance 🙂

Seriously Cody??? Then don’t write a story about an electric bike made for hunting. If you guys/gals keep policing these comments for content your going to loose viewership. You site has been built, for better or worse, on your open comments policy.

Sorry Cody, I thought you were the Editor. Should say “Tyler”…or whoever is policing these forums I guess.

Ripnshread, we actually do not have an “open” comment policy. We have rules here: http://bikerumor.com/comments-policy/
We reserve the right to moderate comments and prefer that this comment thread be used to discuss the bikes.

I’d rather ride a Cogburn Outdoors CB4. No electric so it’s not considered motorized and can be used on more public hunting ground. It’s very capable and has an available bow/gun mount.

Randall – no, the price does not include the trailer.

All – we appreciate on-topic comments very much. In this case, the bike is very clearly aimed at those heading out on ATV and jeep trails to get to a hunting site, not ripping the singletrack. All of us at Bikerumor understand and appreciate the very real threats to trail access that e-mountain bikes pose. And we’re talking to the people behind the scenes about it to help create a solid story for this fall. In the mean time, our posts about a new product or technology will likely be limited to the most interesting new products and tech and not just any new e-bike that hits the market.

I love the concept and want to get one on order. I am a avid outdoorsman that loves biking, hiking, backpacking, fishing as well as hunting. If this can be a tool to get more people to enjoy the trail systems and the outdoors, I think that =’s more people fighting to keep them open.

outstanding!
i’ve done a lot of cycling, over 20yrs worth
i’ve done some touring, some hobo-ing, etc…
i have a Big Dummy with frame bags from Porcelain Rocket
also a Hunter 29er, again, with frame bags… done plenty of off road touring/living.
pulled a BOB trailer… a lot (in the day) actually wore out 2 of them.
also had a Pugsley, rode that thing like crazy (It’s a Pug’s Life)

anyways… this is a great combo. if there is a way to get power to regenerate, and able to do things like charge peripherals (iPhones, gps, et al)
damn… you really could be the Uber All Pro Techno Hobo.
needs to parter with Kifaru tipis. see Patrick Smith!

I’m real glad someone polices these comments. Keeps me coming back to Bike Rumor. Plenty of seriously bitter humor makes it’s way through. Anyway, @Devian, I totally agree with the solar option, even to keep a charge on the battery.

Great idea but heavy on the price. Id pay around $2500 for a bike like this. If I have to pay anywhere near the price of a quad im buying the quad. Or if im paying that price your bike needs a front fork. But overall really nice concept.

Really nice to see a company expand there idea’s to reality, here in New Zealand we can ride into what are known as public land and some of our National Parks but not all, but what a way to have an adventure with little to no impact wether you are a hunter or a camper being able to take extra gear to set up a nice base camp with family or friends is awesome look forward to the release and well priced good luck.