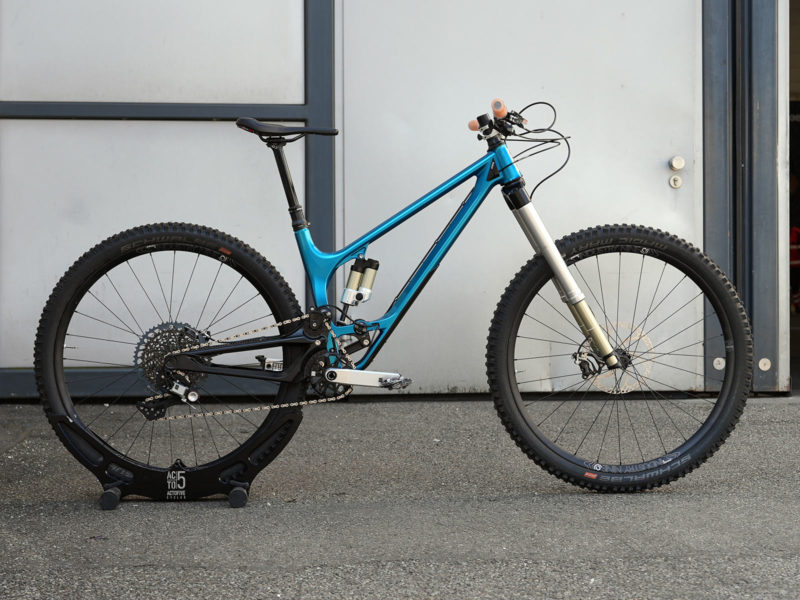 In other words, Intend has just created the “high pivot” equivalent of a suspension fork. Meaning, they’ve taken the rear-ward axle path benefits from the latest crop of mountain bikes and applied it to the front of the bike, which should help you smash through big hits faster than ever!

Oh, and it’s on a new version of the CNC machined Actofive enduro bike, which, coincidentally, also has a high pivot design. First, let’s take a look at the fork… 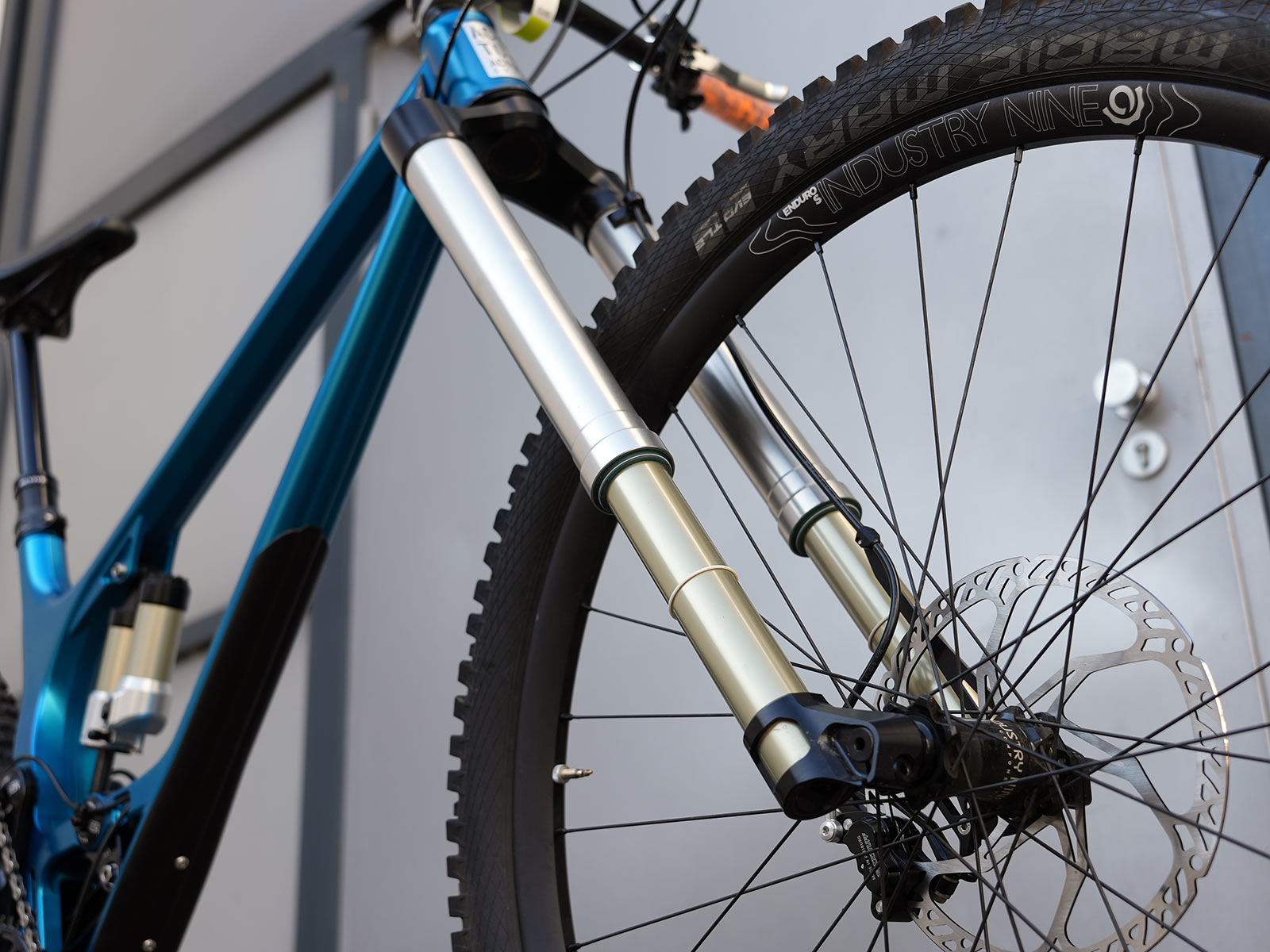 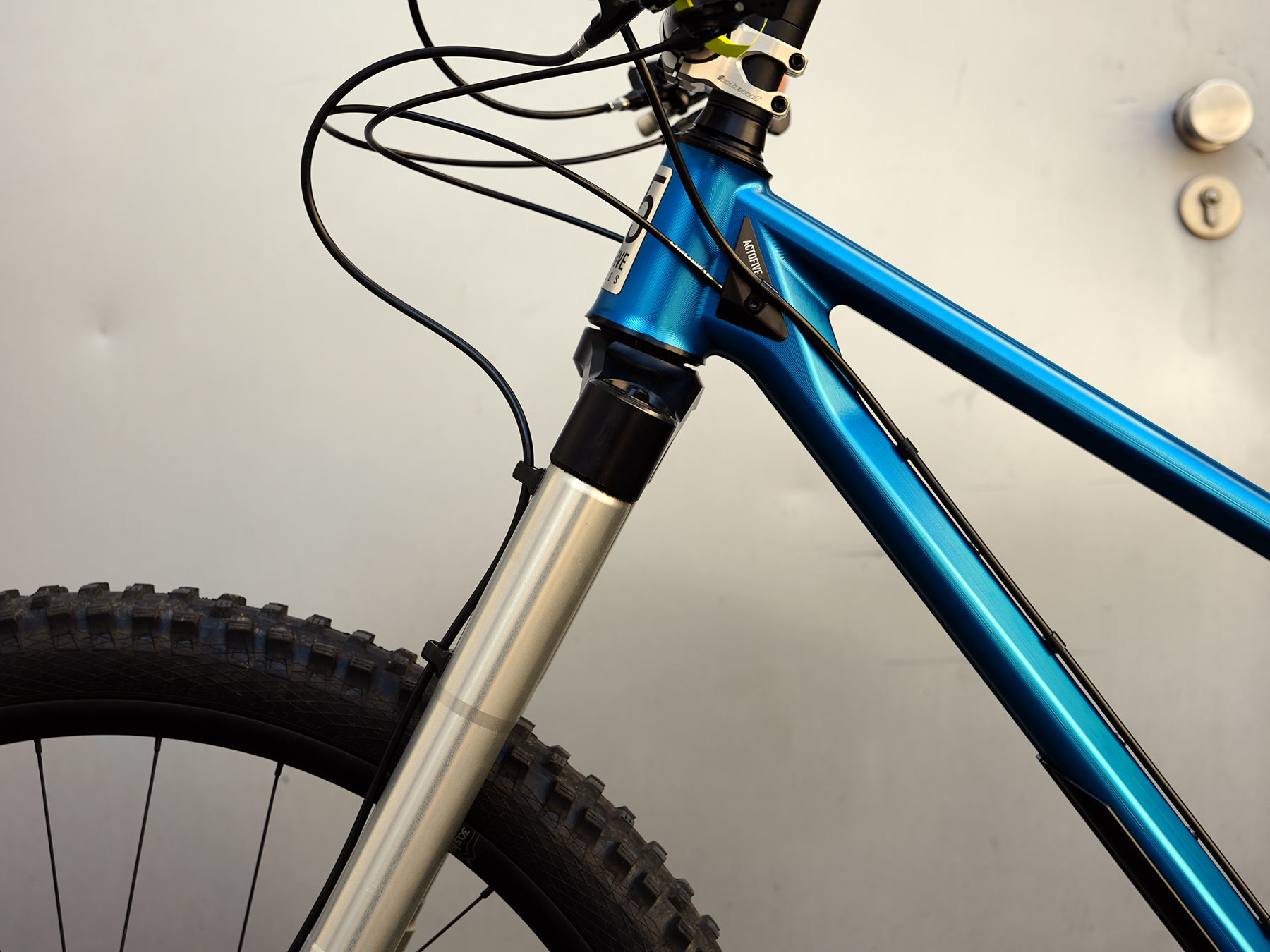 The idea is to put the compression path more in line with what you’re actually experiencing on the bike than the “standard” forks that move in a more vertical path. 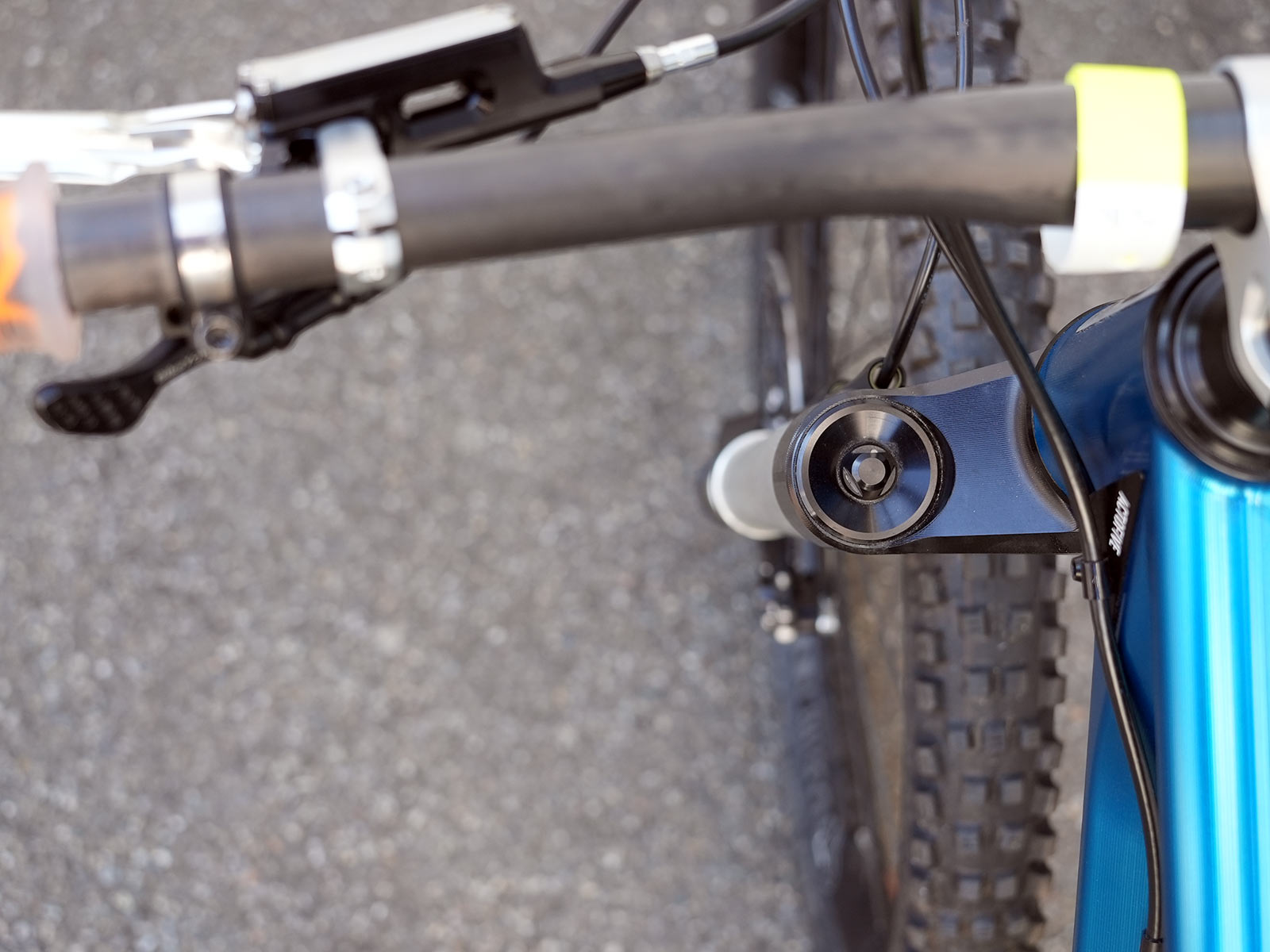 The idea isn’t unprecedented. We’ve seen prototypes from X-Fusion years ago that also angled the legs further forward, but they reduced the offset at the dropouts, putting them directly under the legs rather than jutted forward.

But the idea was the same. Not only would a more angled axle path more accurately represent what happens when you hit a bump, but it also means less stiction since the stanchions aren’t combating as much fore-aft force. 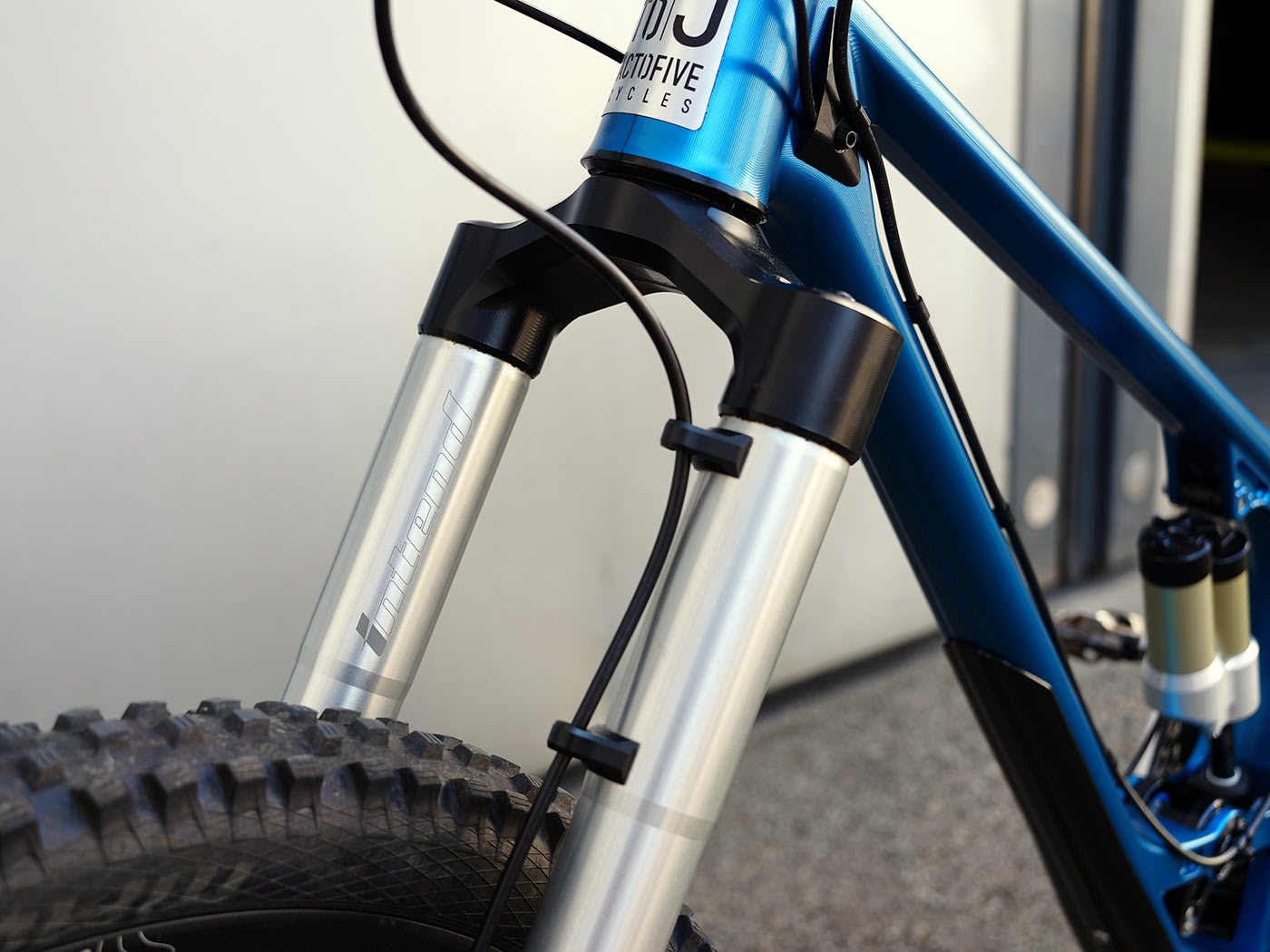 But, the fork has to work with modern, slacker head angles. So, looking at it from the side, you can see that it moves the top of the stanchions behind the steering axis. Then, it cants them forward more, adding 5º to the head angle. 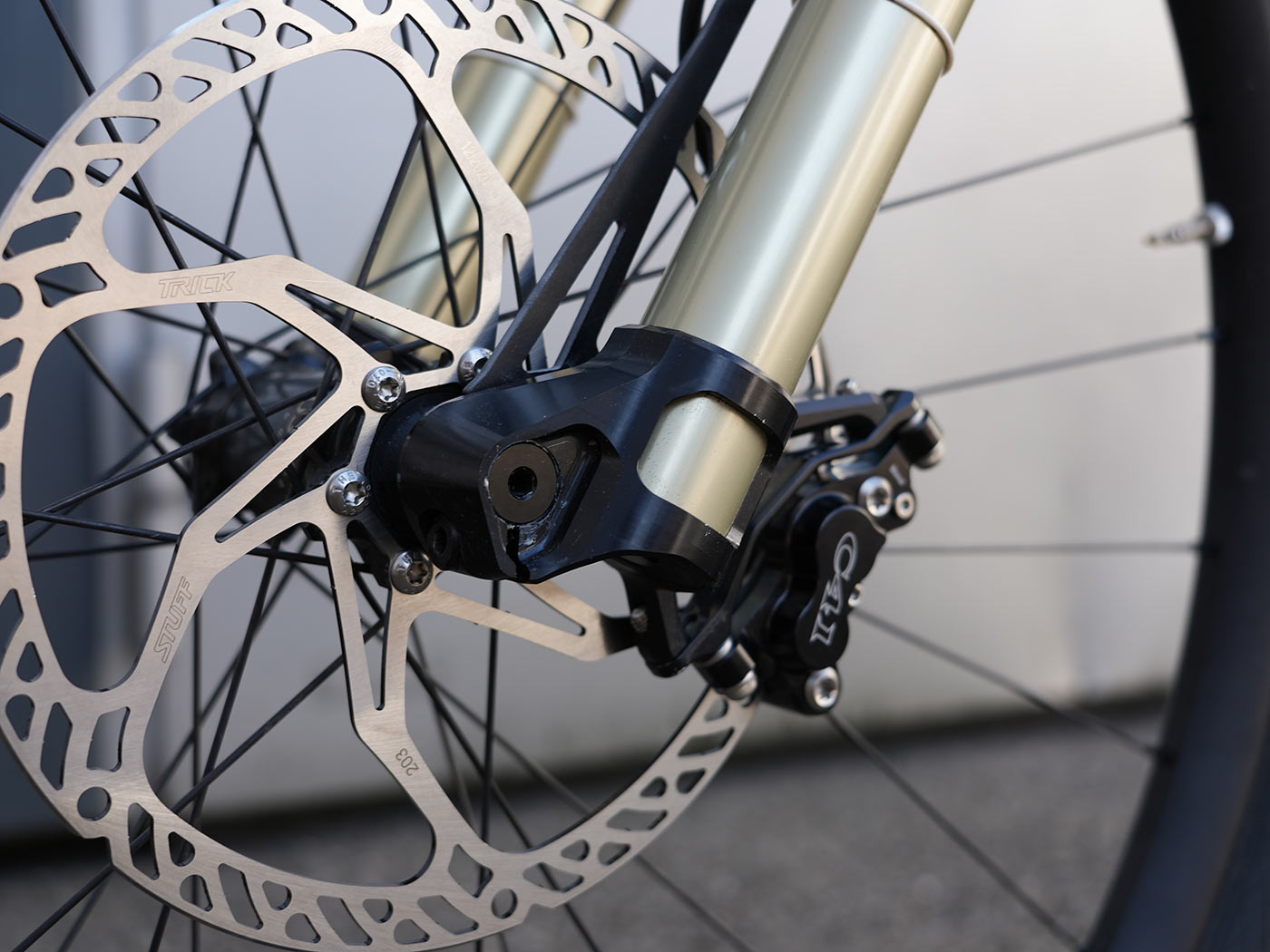 It’s a prototype for now, they’re still testing it. But, Intend has a history of moving quickly, so who knows where this could lead… Now, about that bike… 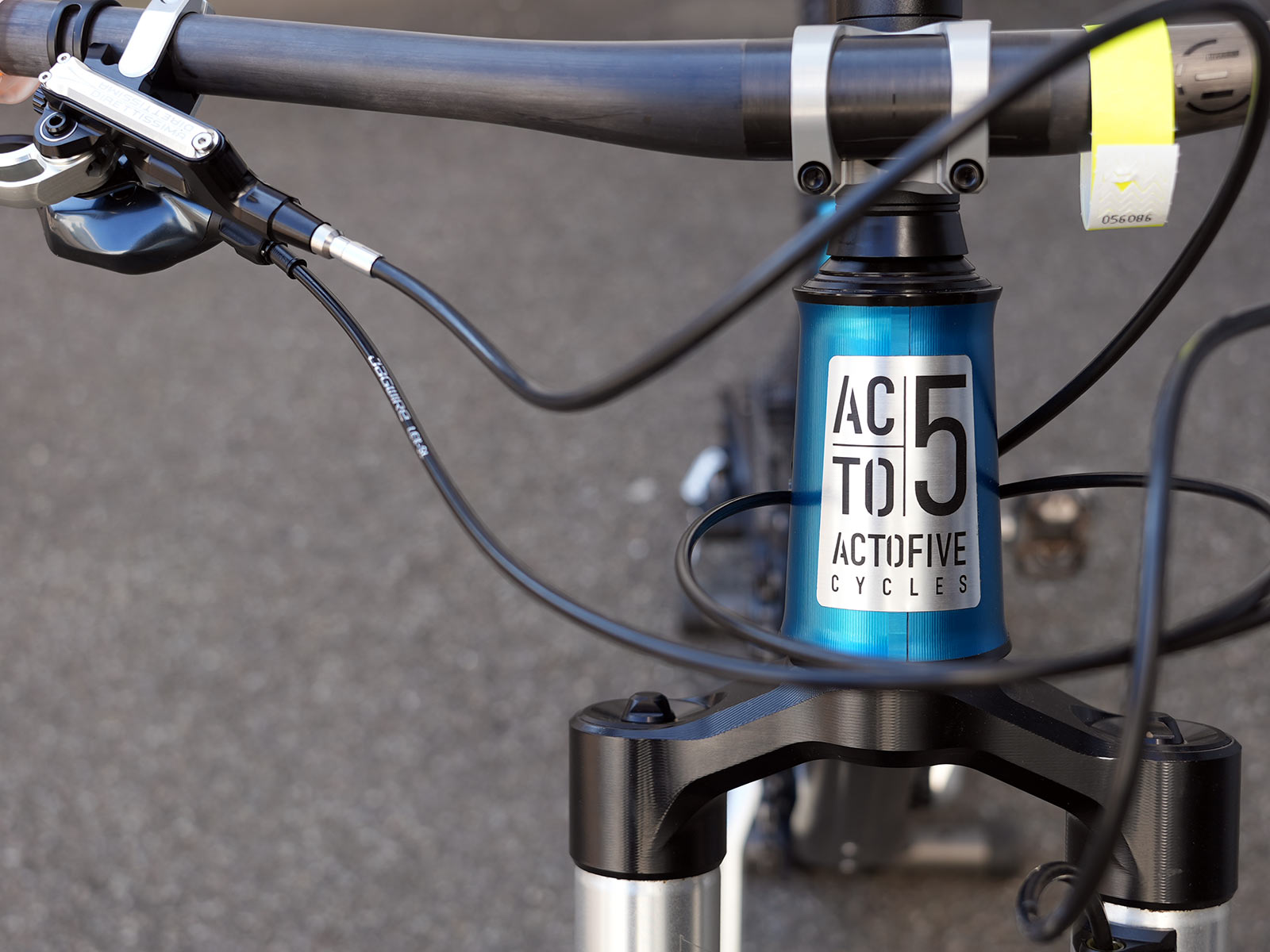 This Actofive P-Train is a fully CNC’d alloy version of the original steel version. And if you need a refresher, while we haven’t covered Actofive’s bikes in particular, they have contributed quite a bit of knowledge through out AASQ series. 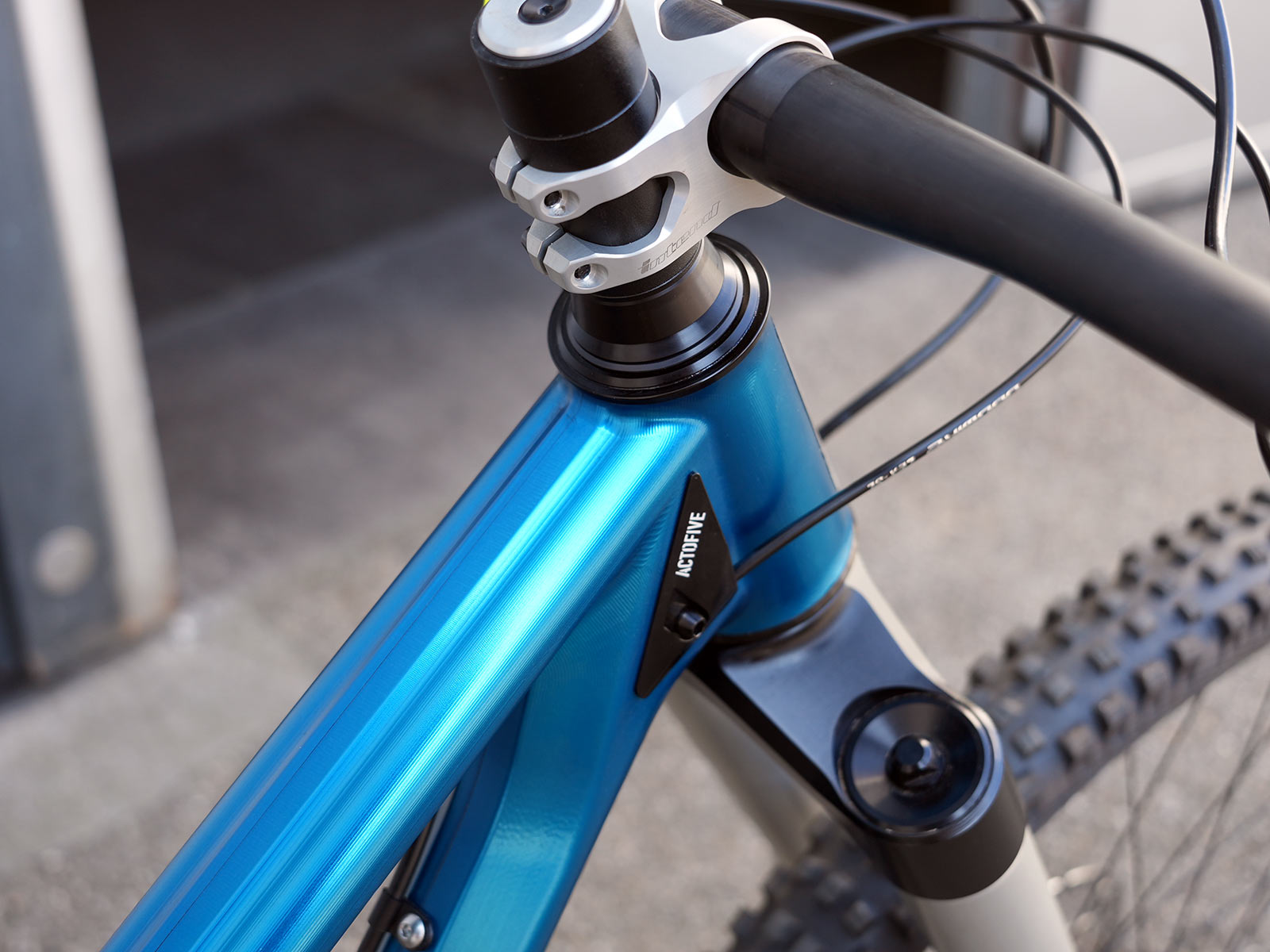 The frame is machined in two halves, then bonded together. This color is a custom anodized hue called Ocean Blue. 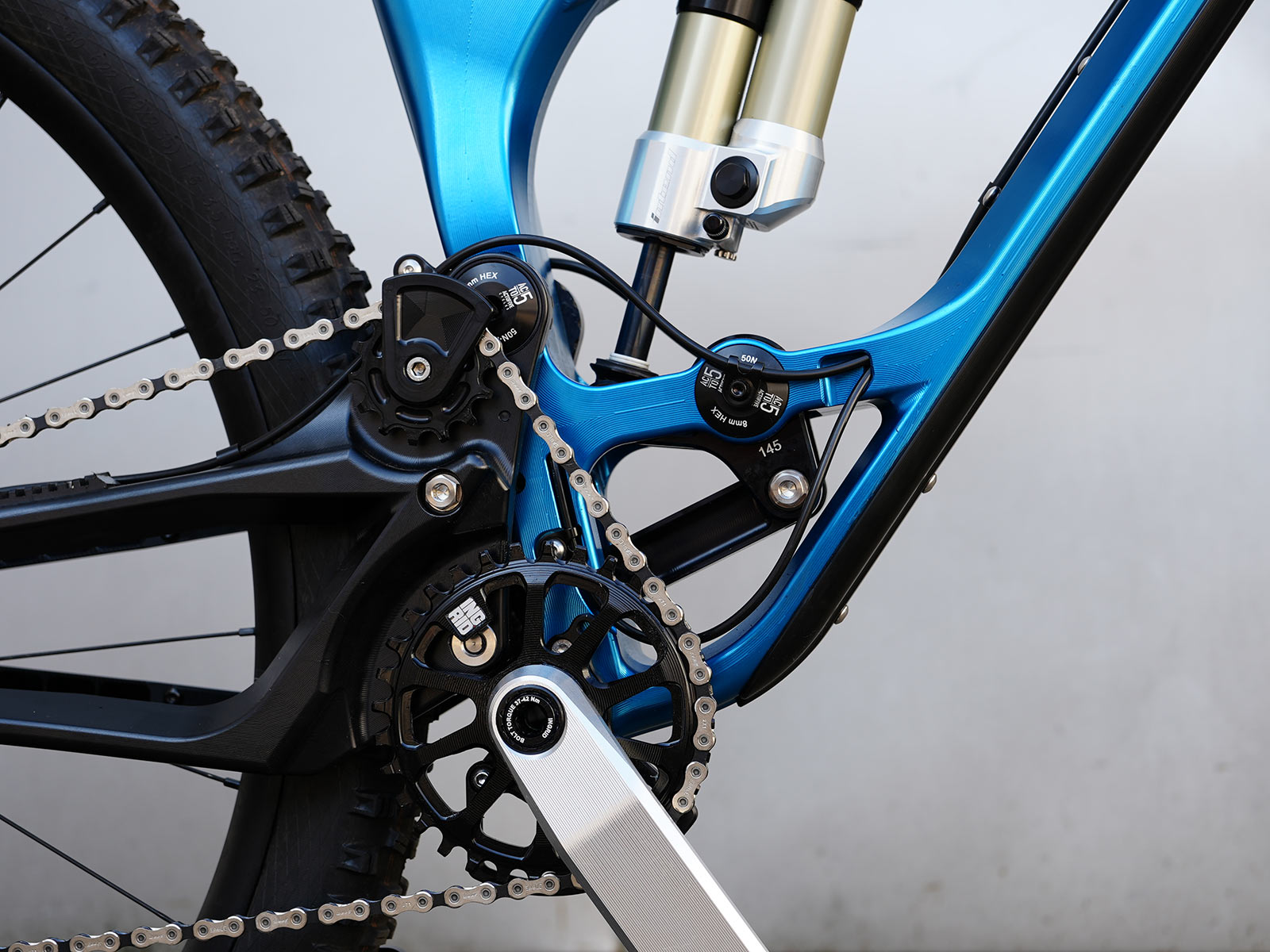 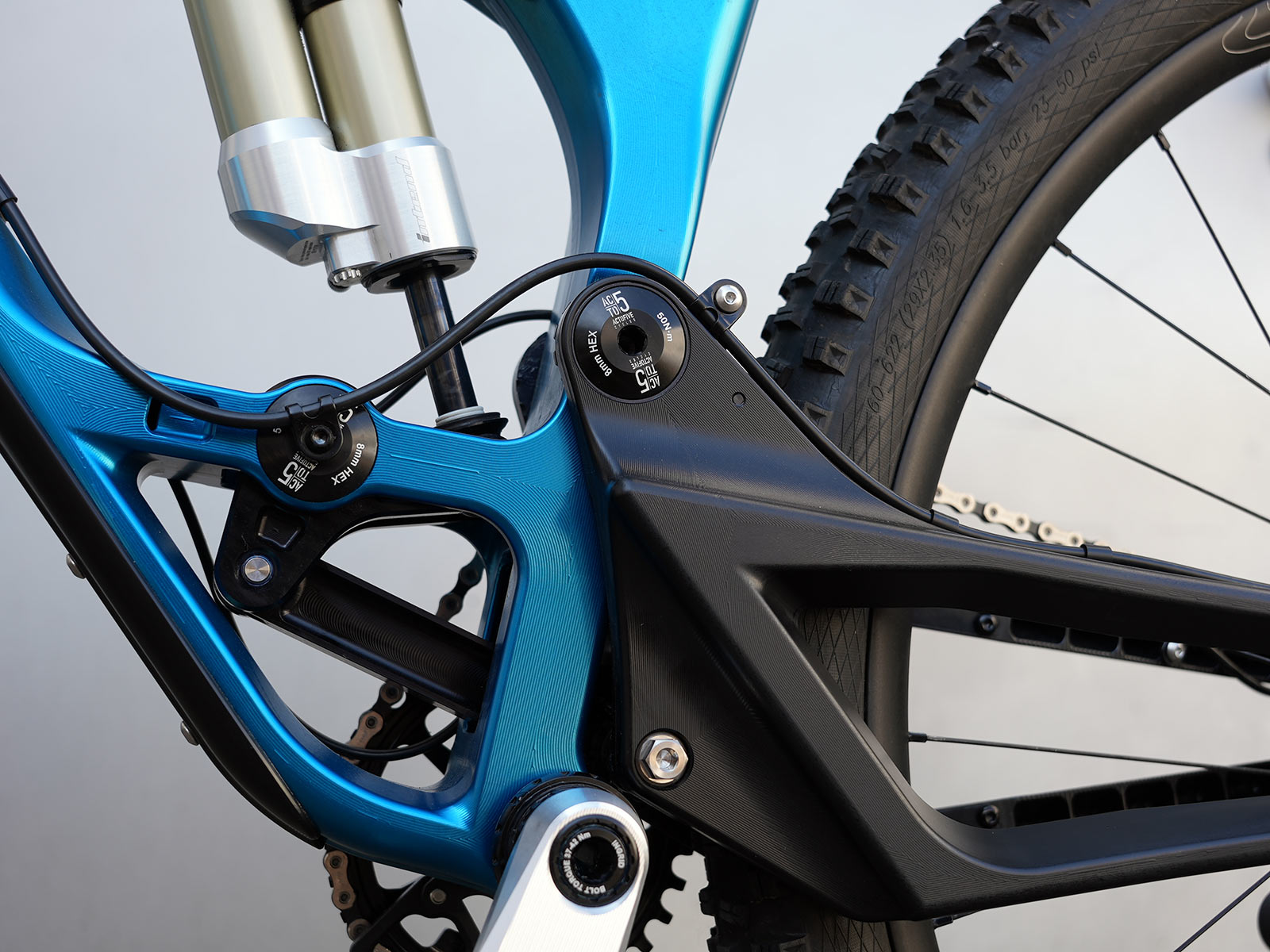 The suspension uses an arm that pulls an L-shaped arm, driving the shock upward to get 145mm of rear wheel travel. 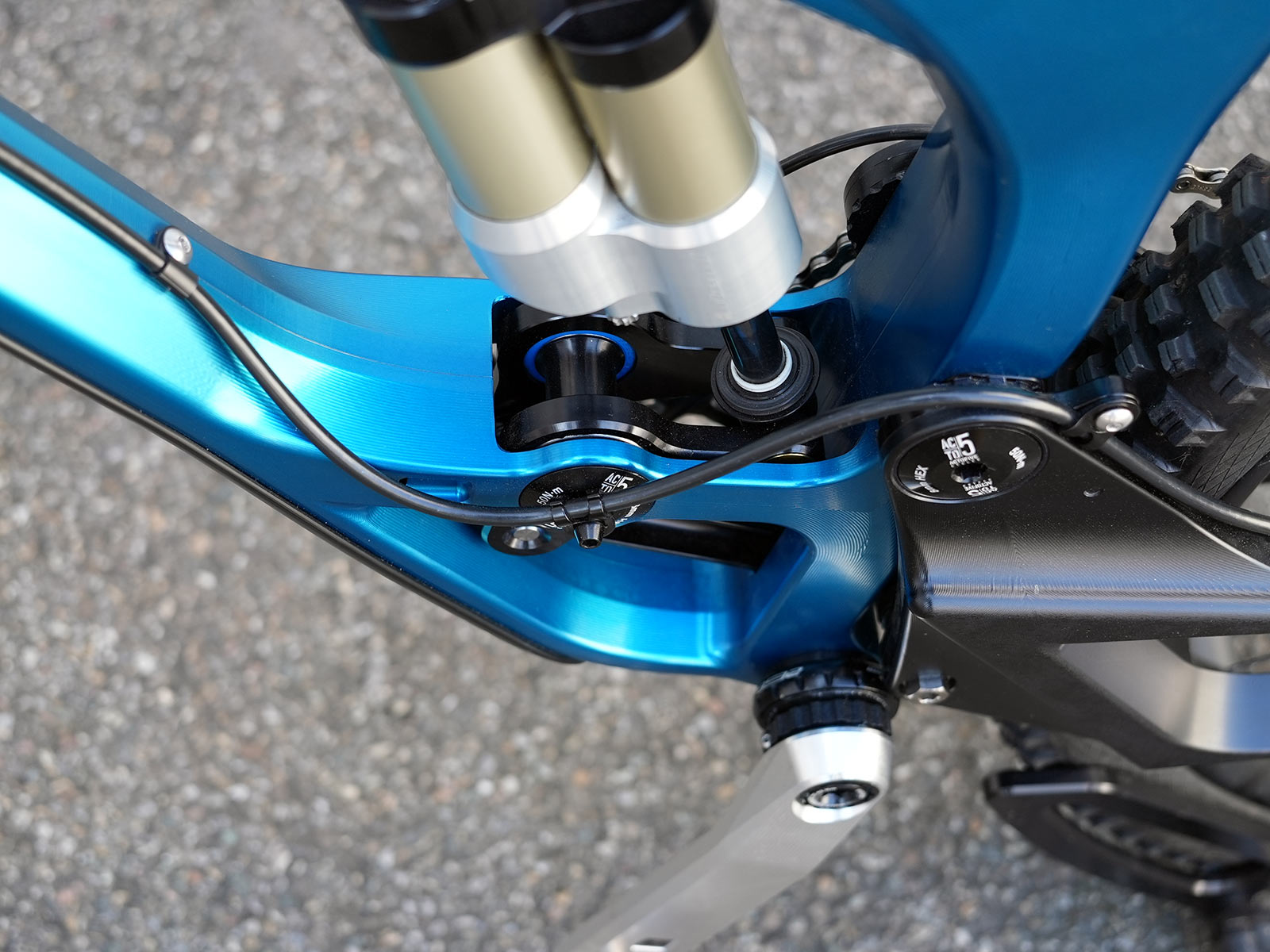 They say, because of the high pivot design, that it feels like more 160mm travel, and it perfect for enduro riding. 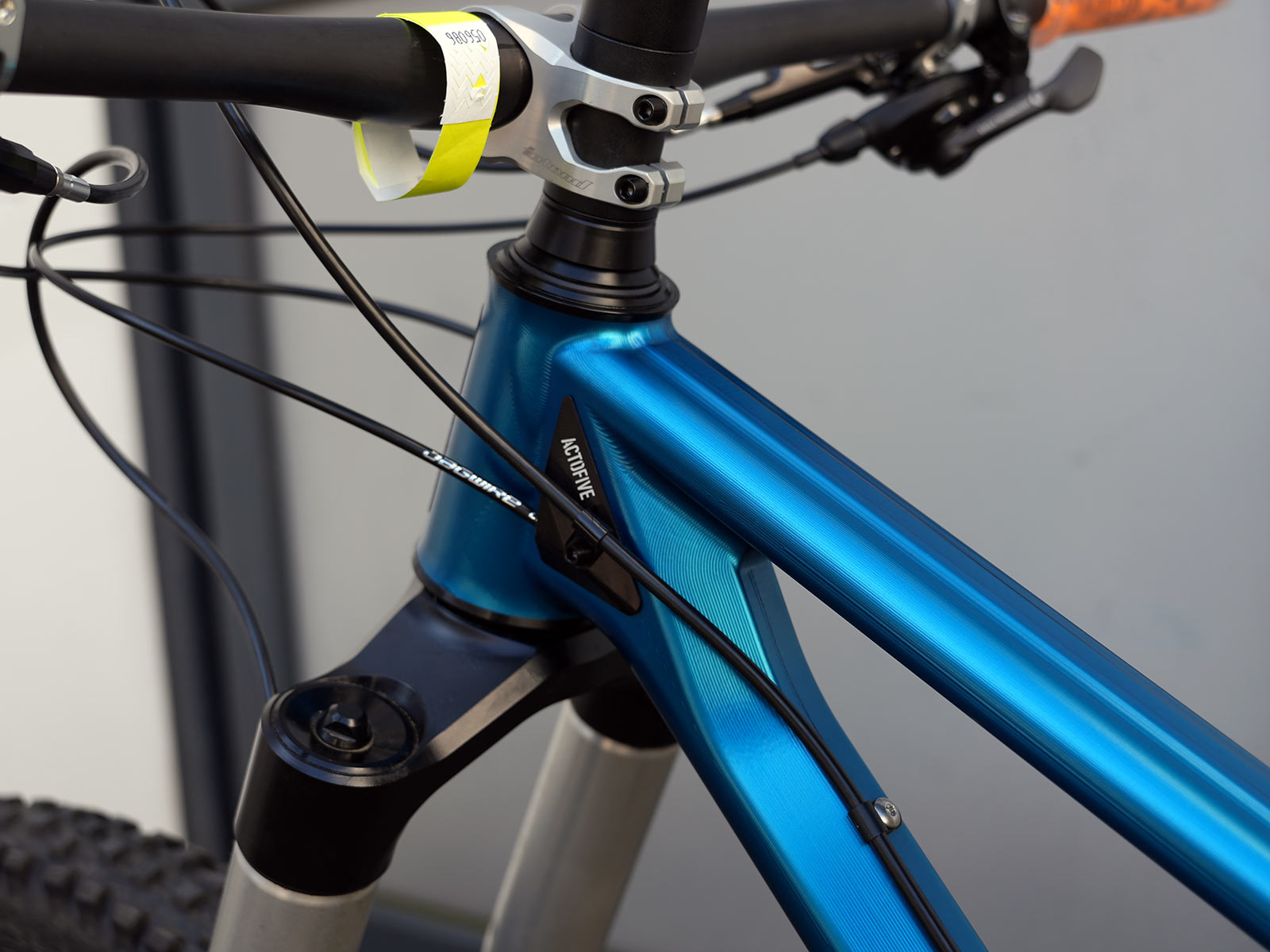 It’s designed around a 160mm travel fork, but works with as little as 140mm front travel. 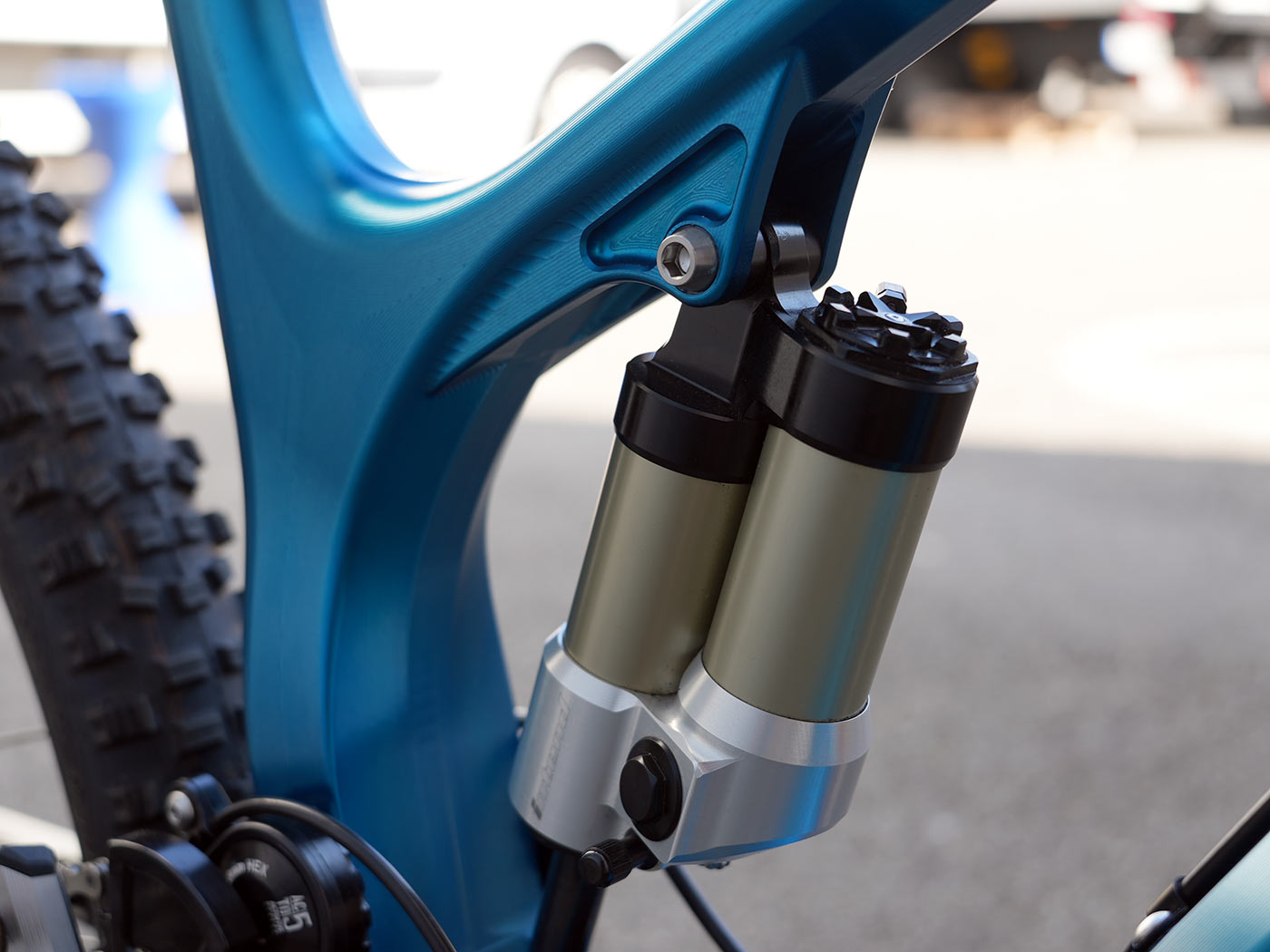 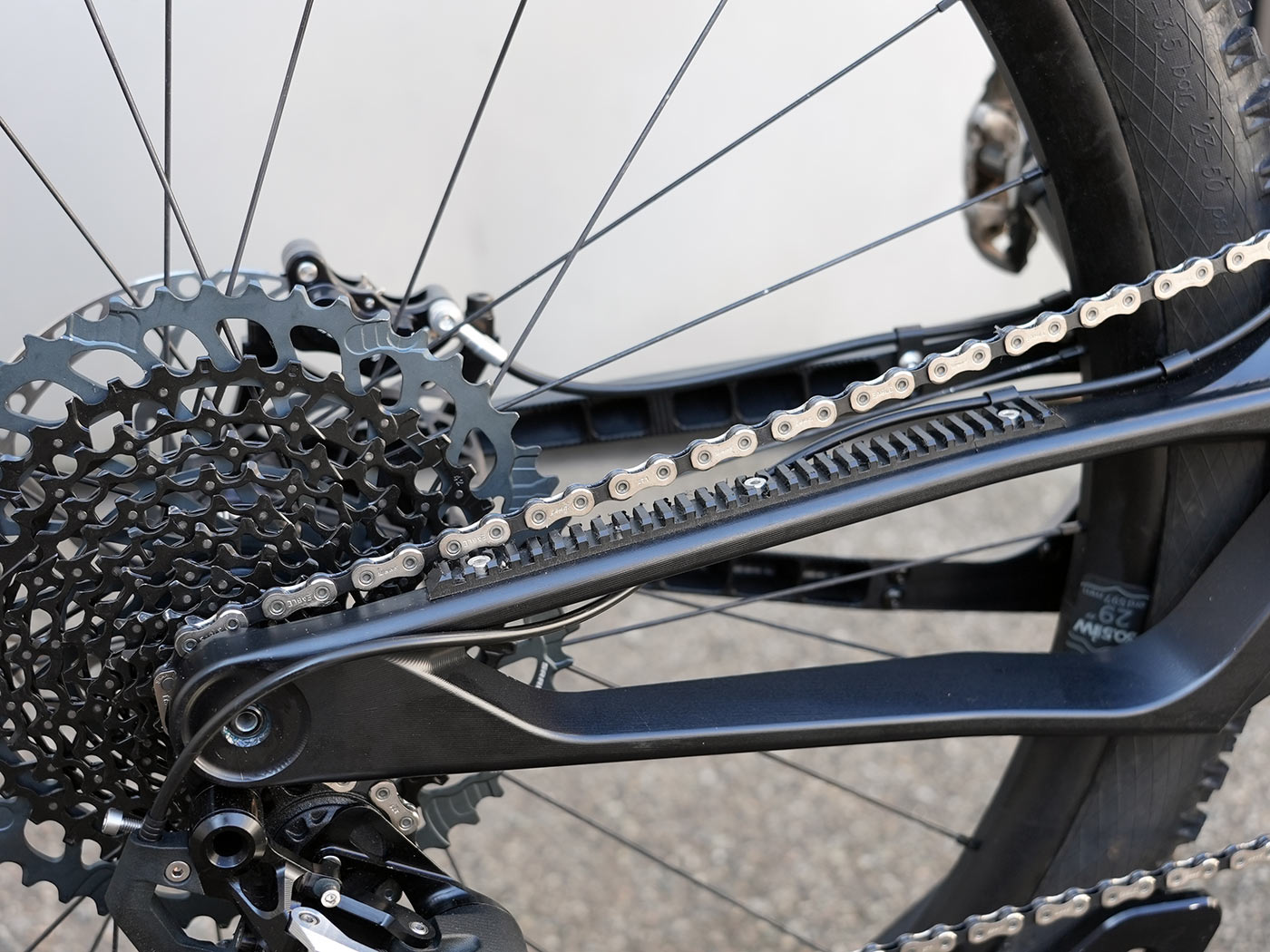 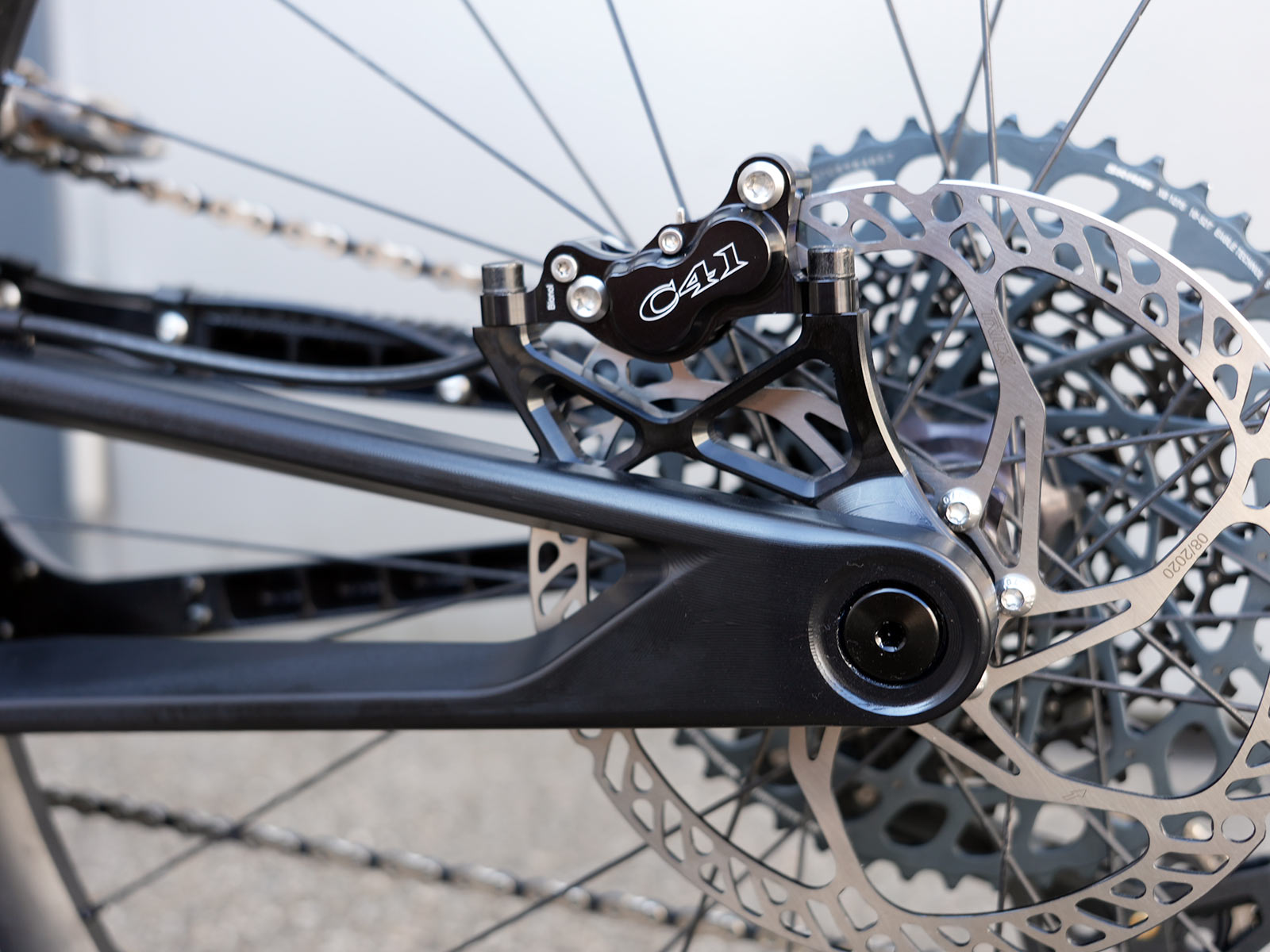 Thus far, they’ve sold about 30 of these bikes worldwide. Retail price is €3,550 without VAT. 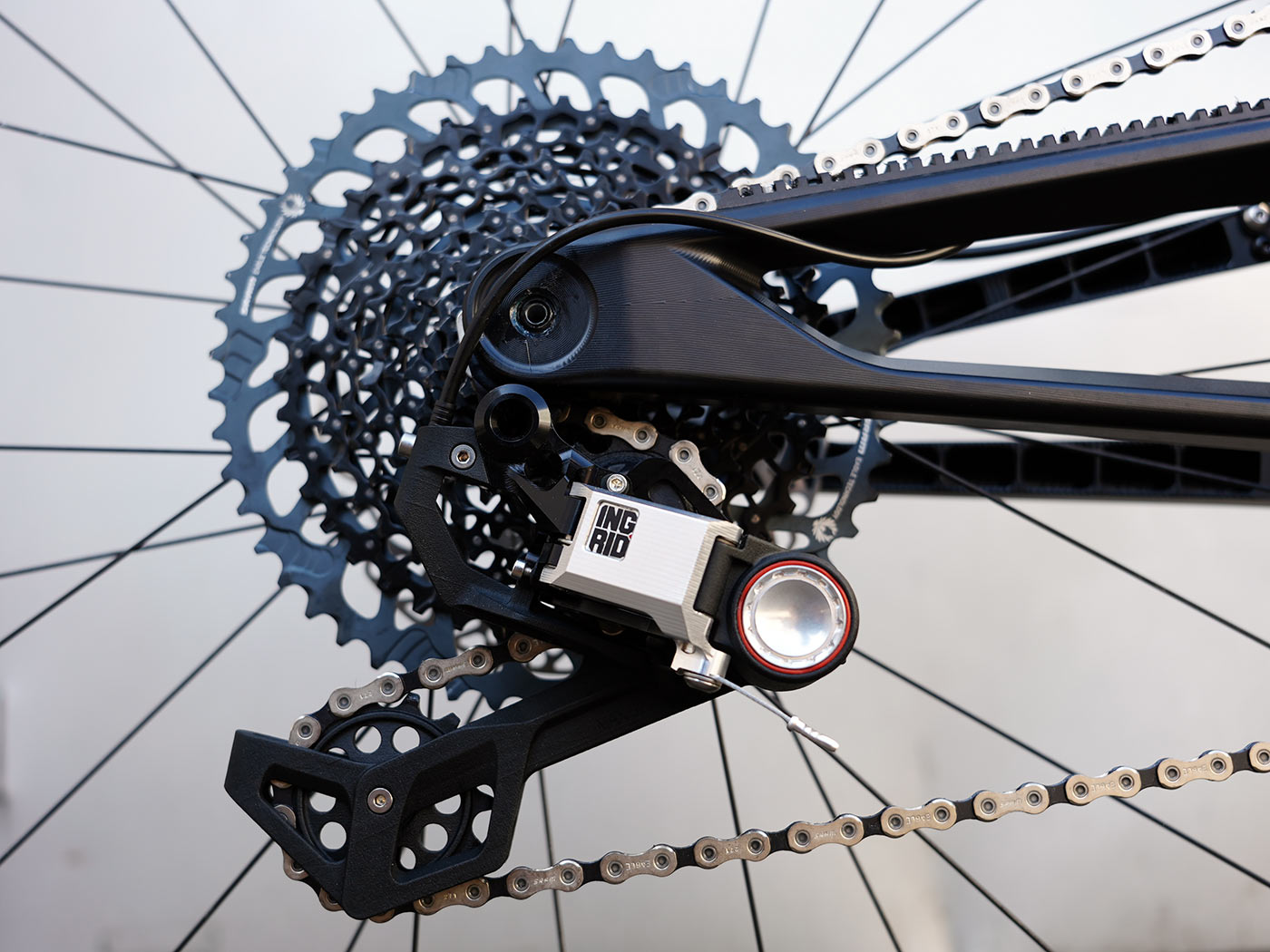 This bike was equipped with the Ingrid 12-speed rear derailleur, pair to a SRAM Eagle shifter and cassette.

“Form Follows Function” everything about this bike looks just right . It looks like a bump eating machine. It looks ……… well bad ass , period. I love the aesthetics , shape , colors , fork / frame tube diameters sizing to each other . It just looks like a crafted piece of highly functional artwork . If I had the money I’d buy it on looks alone . But I’ve read articles on the steel versions performance so I’m sold ! Sign me up on the ………………….

Arent You guys mixing up head angle and fork offset? The angle of the fork legs does not have any imapct on the head angle itself. The only relevant impact on head angle is by increasing or reducing insatalled fork length. The other relevant measure is the fork offset. The design of this Intend fork – if it is done accurately- will work like any other fork e.g. for 160 travel / 29“ wheel at 580 mm fork length /44 mm offset. The slacker fork leg angle is irrelevant for the geometry.

Im also wondering why they call it negative offset, which its not!

For such an otherwise stunning bike, the cable/hose routing really looks like a bit of an ugly afterthought.

They should have said, “making the fork legs 5° slacker than the head angle”