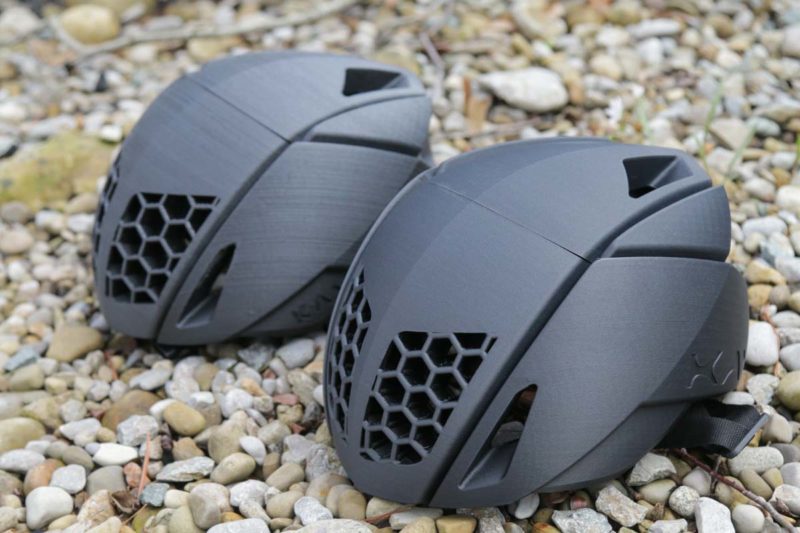 Will the future of cycling helmets materialize from a 3D printer? KAV Sports certainly thinks so. With a background in 3D-printed hockey helmets, KAV set its sights on building a cycling helmet using similar technology. At the last Sea Otter in October 2021, KAV invited us to check out an early sample of that helmet. While it was impressive to be measured one day and delivered a custom helmet the next, the helmet was still a bit rough. This is why we were very excited to see the massively updated Portola helmet at this year’s Sea Otter Classic. 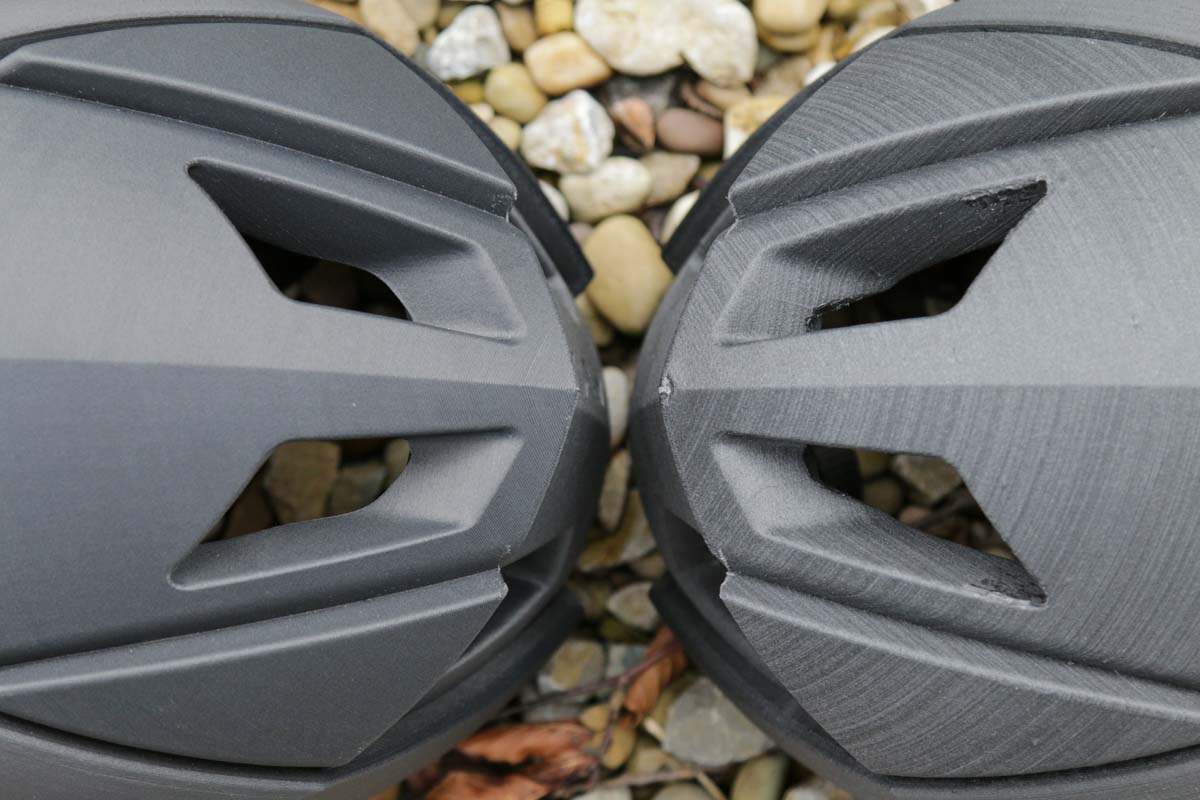 Right away, the newest version of the 3D-printed helmet is noticeably different. Printed with a much finer surface finish, the helmet still has a visible texture, but it’s much smoother than the past version. KAV told me the first version of the helmet I had was version 34. In just over 6 months, they’re now on version 65, which highlights how quickly designs can be revised using 3D printing. 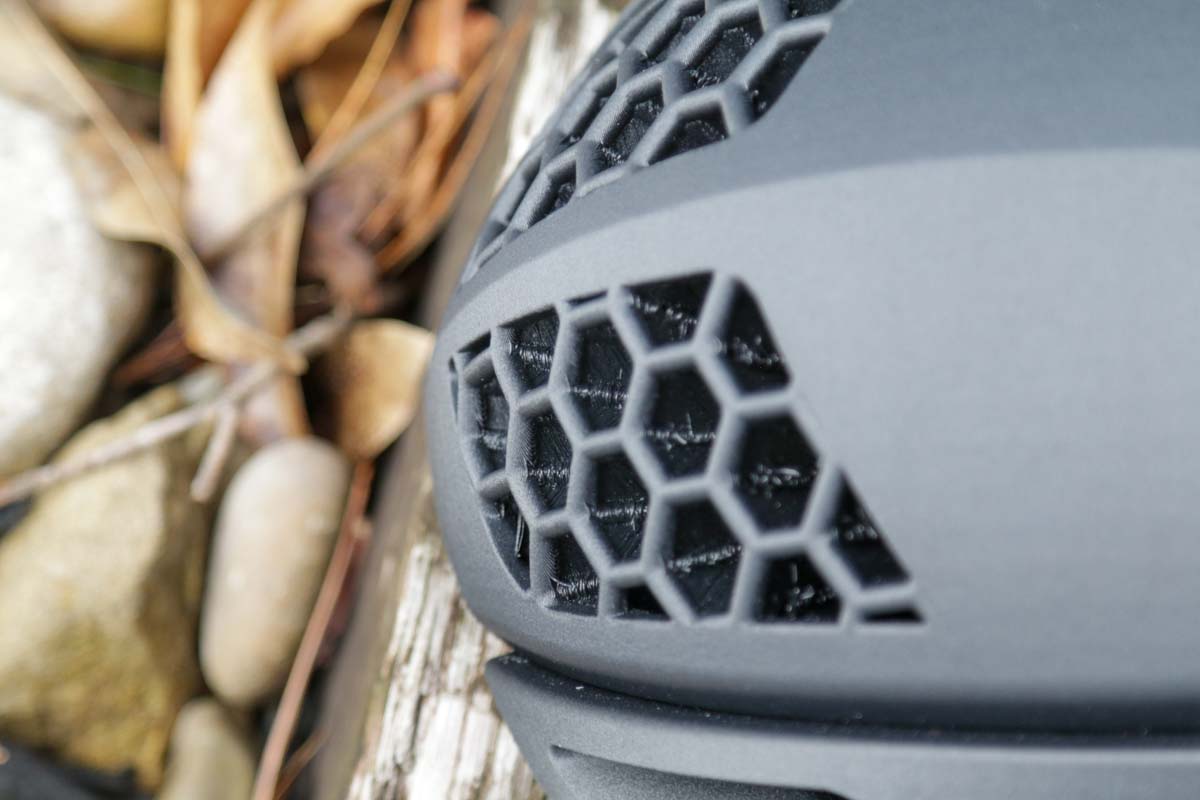 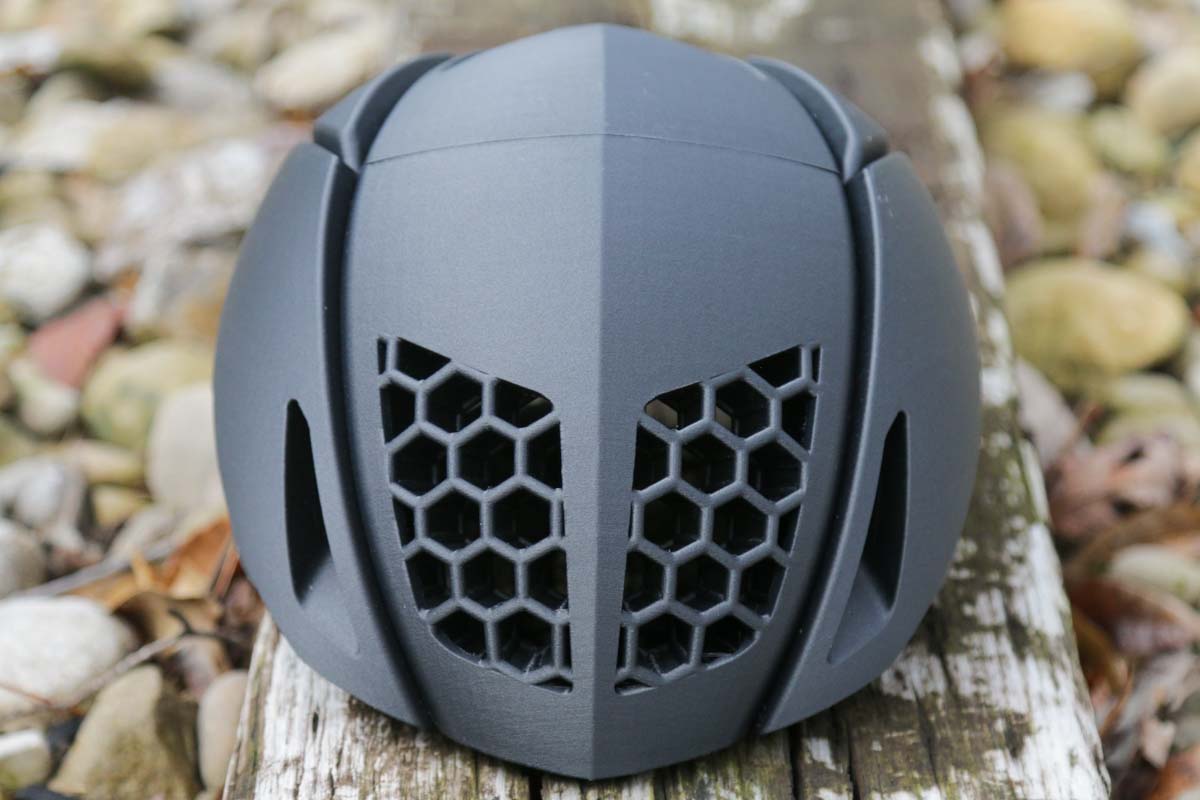 While the main concept of using 3D printing to create an anisotropic honeycomb TPE “hex energy matrix build structure” is the same, KAV has added additional reinforcement to key areas like the tubular cylinders where the joints meet in the front vent. KAV says that this helps the design in higher velocity impacts and allows for a massive vent in the front of the helmet, and overall increased protection values. 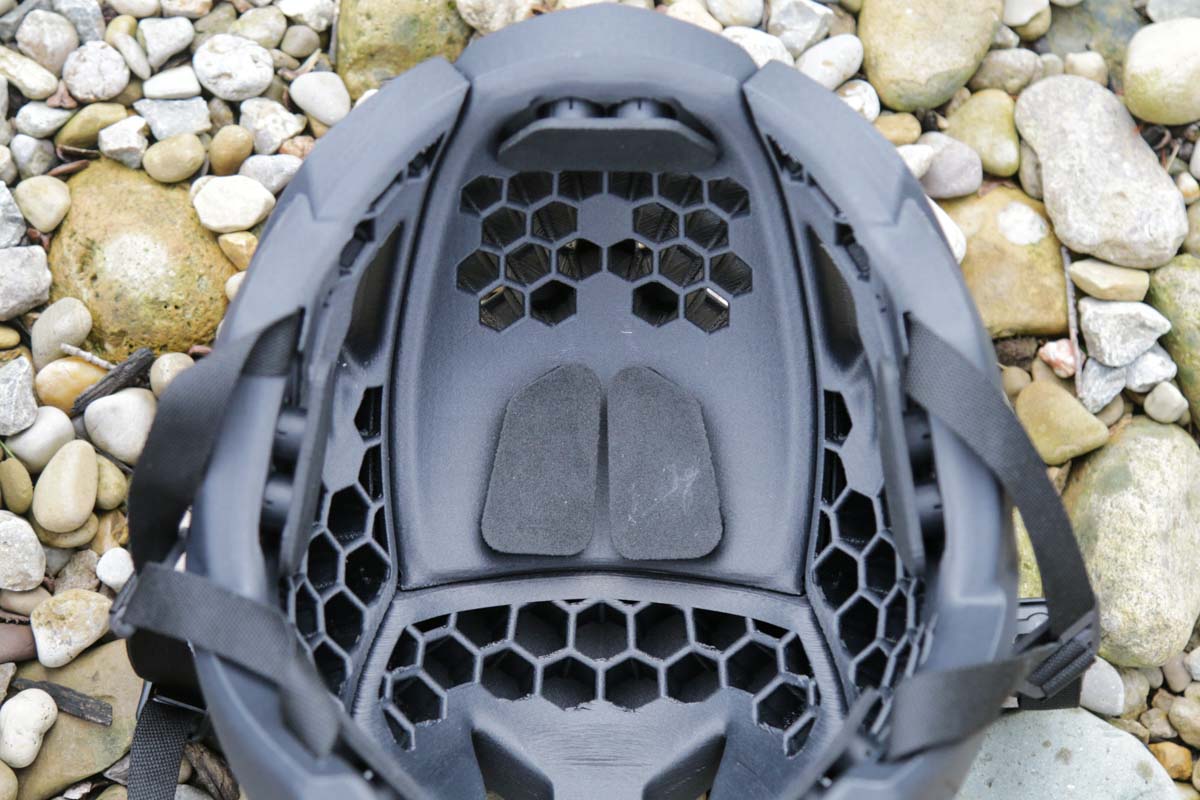 The helmet is printed with a hexagonal structure that is designed to crumple and shear in a crash.

Those protection values are likely one of the biggest questions for potential customers (at least they were for me), to which KAV points to third-party testing with Dynamic Research in Torrence, CA. Through work and testing with Dynamic Research, KAV claims that its helmet exceeds helmet certification standards by 25-50%. That includes a shearing component that is supposedly built into the material which claims to eliminate the need for rotational impact systems such as MIPS. How it compares to other helmets remains to be seen, but it’s something we hope to see tested with the Virginia Tech testing or similar. 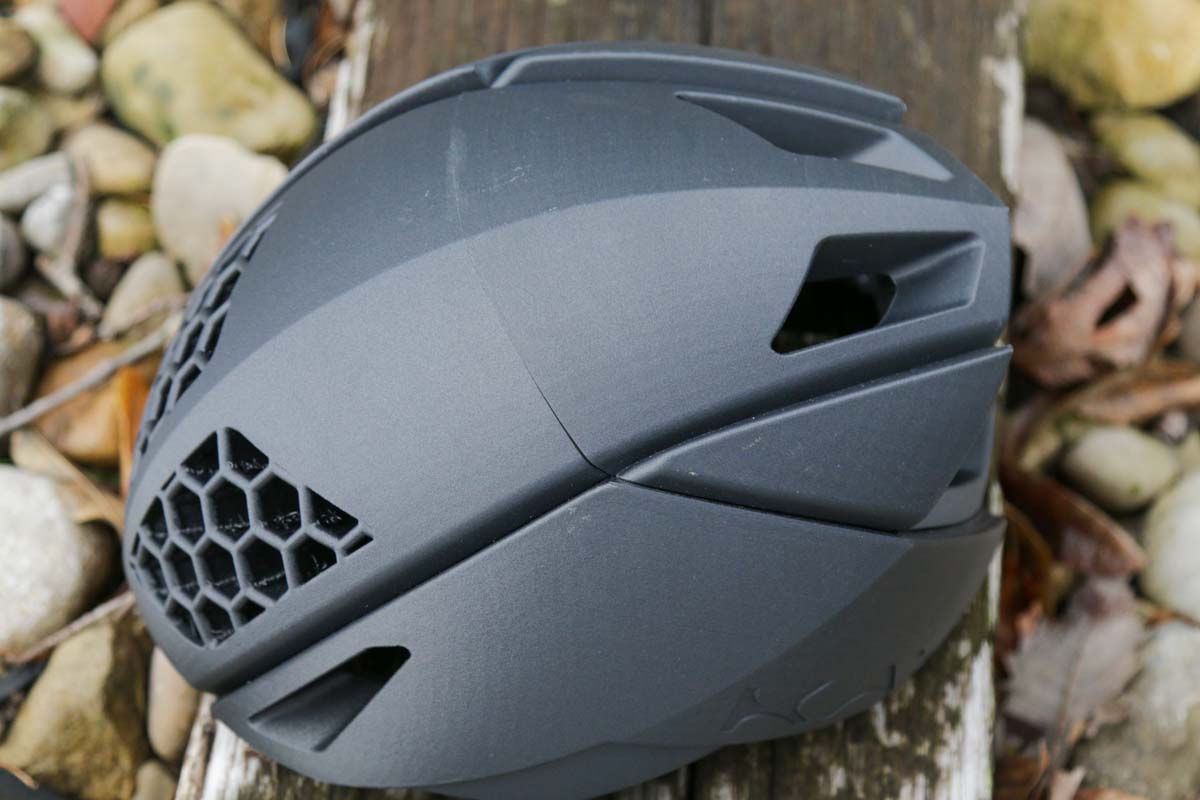 If you want to get fit for a helmet, you can either order a free fit kit from KAV or just order the helmet and they’ll send you a fit kit. Either way, they’ll schedule a custom fit appointment over Zoom where they’ll walk you through the multi-step process of measuring your head for the helmet. While they don’t actually ‘scan’ your head, the measurements seem like they’re able to accurately capture your head shape. It’s unclear if the system would work if you had a large bump or something that would complicate the fitting process, but it seems like that would be addressed in the online consultation.

After your measurements are captured, KAV uses that information to build a custom helmet based on your fit profile. The helmets are printed in five separate pieces in Redwood City, CA, and then glued together with interlocking panels to create the final product. 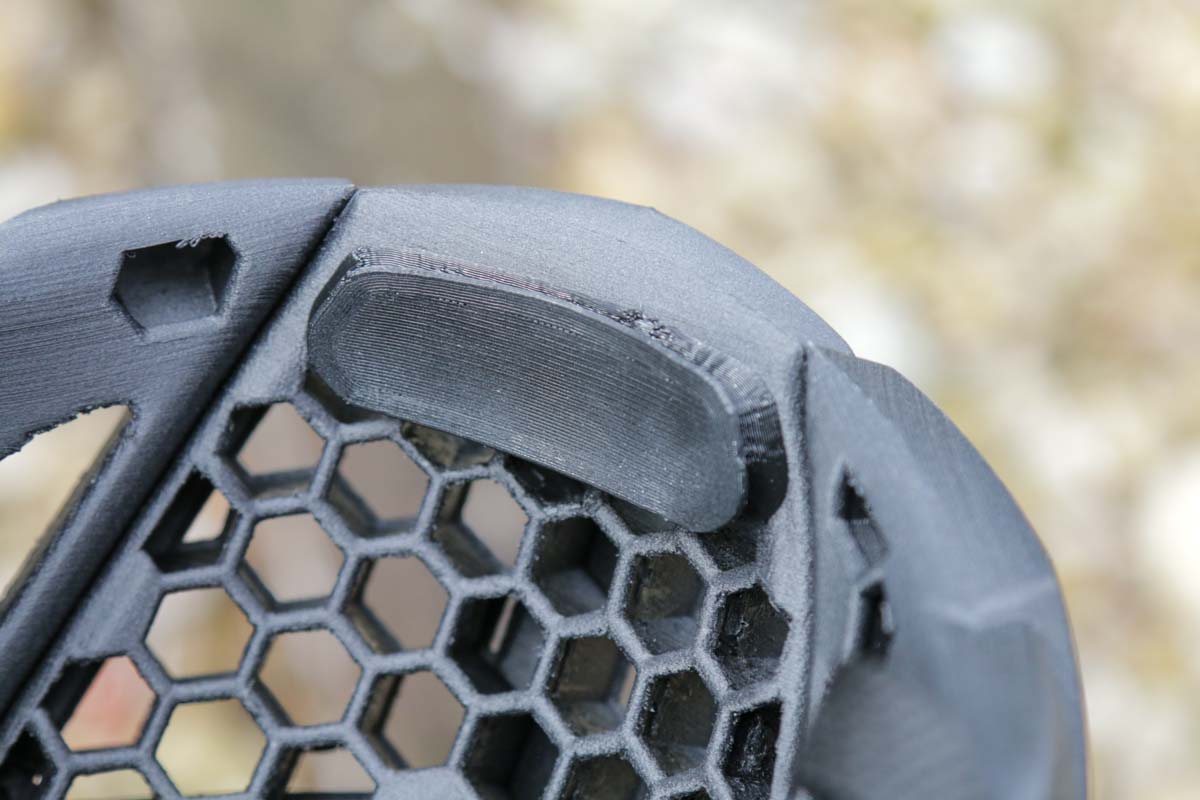 One of my biggest concerns with version 34 was the 3D-printed padding. The interesting accordion-like padding was 3D printed, but also pretty rough. For bald people like myself, it was simply uncomfortable. On version 65, KAV has a completely new padding system which is ‘spring-loaded’ like the last version. 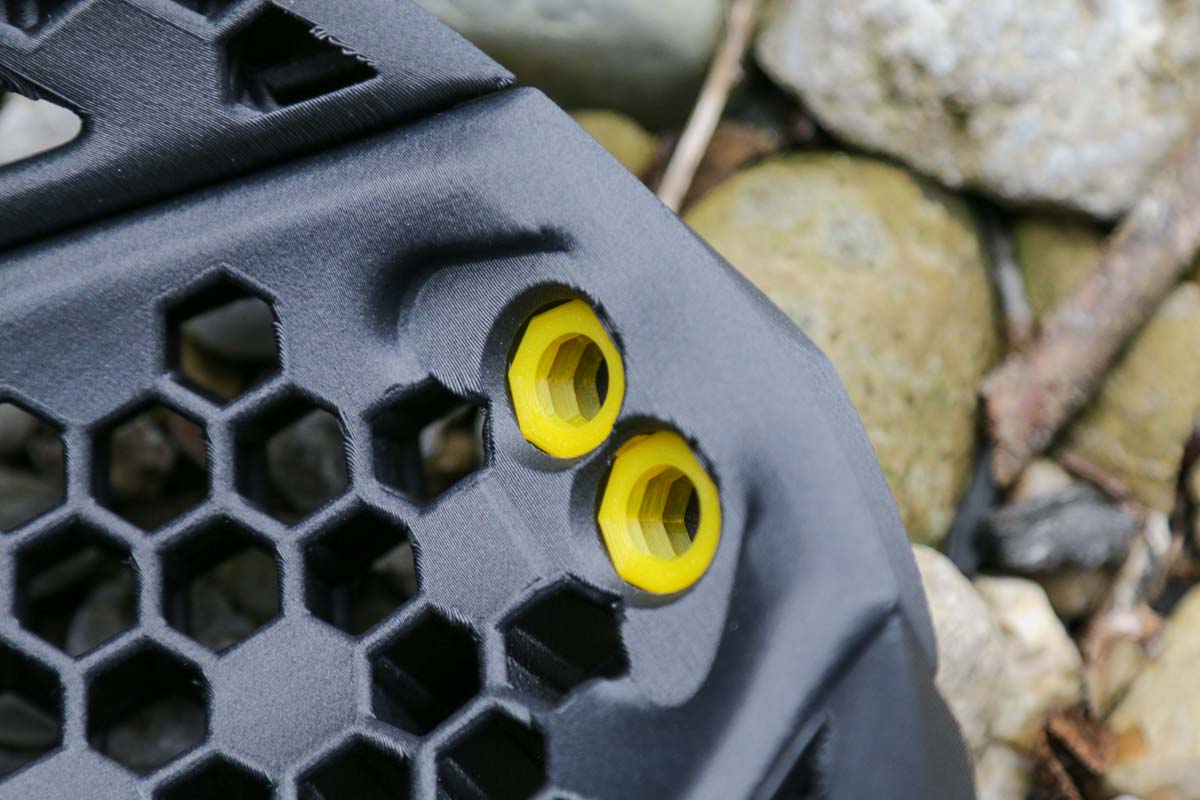 v.65 padding springs are hidden inside the helmet.

Only this time, the springs are embedded in the helmet itself, rather than a part of the pad. These springs are also 3D printed and can be changed out to adjust the fit. In total, there are seven large spring-loaded pads arranged around the helmet. 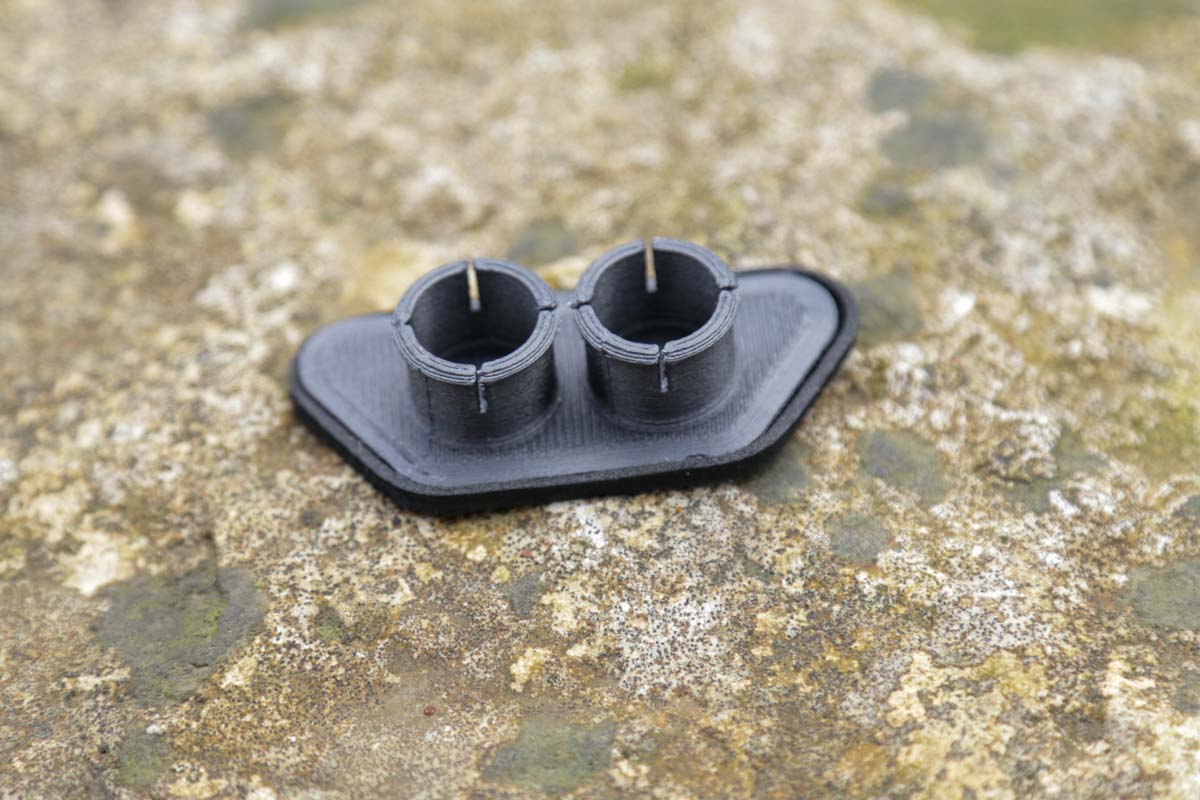 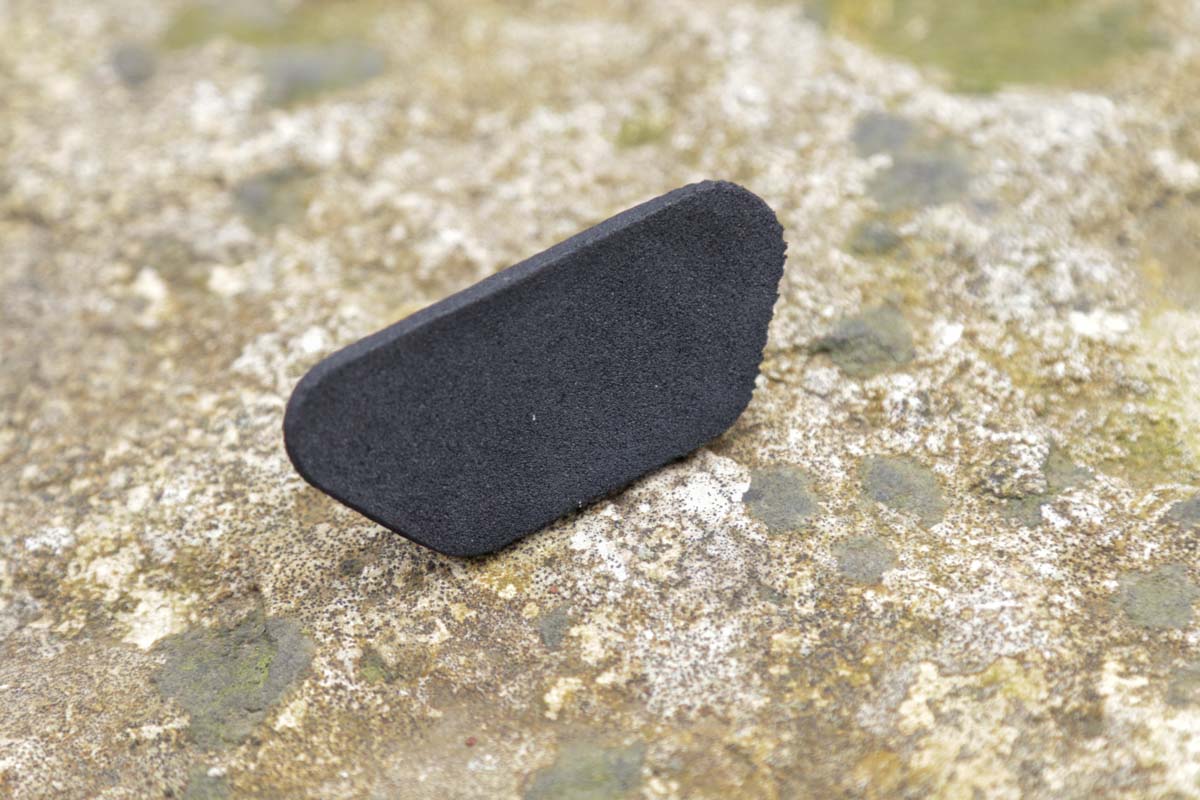 Most importantly, the pads are still 3D printed too, but now have a soft foam surface which is much more comfortable on bare skin. They’re also made from a material that won’t absorb sweat, so KAV says you won’t get that cold, wet feeling if you take off your helmet for a bit and then put it back on. 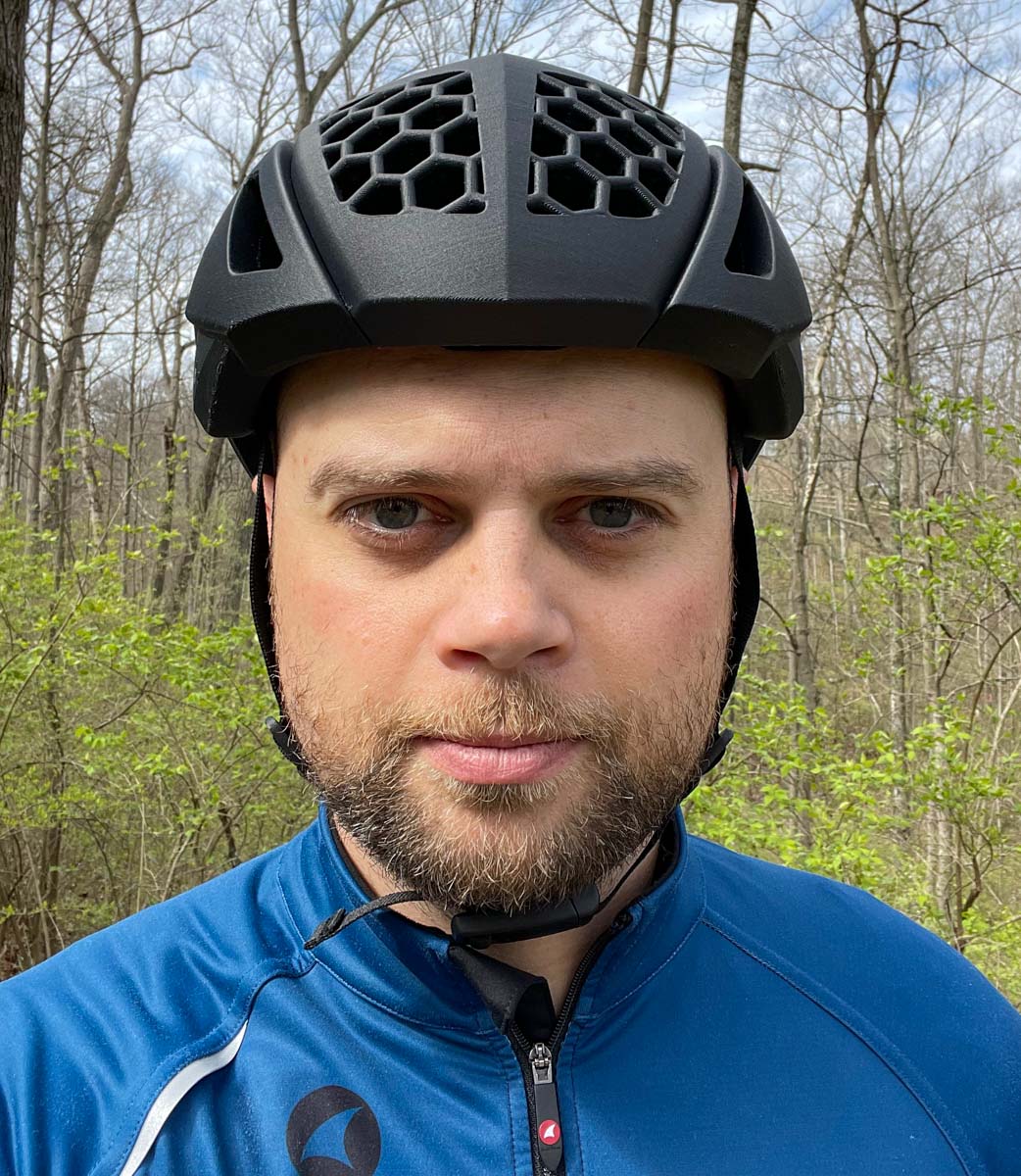 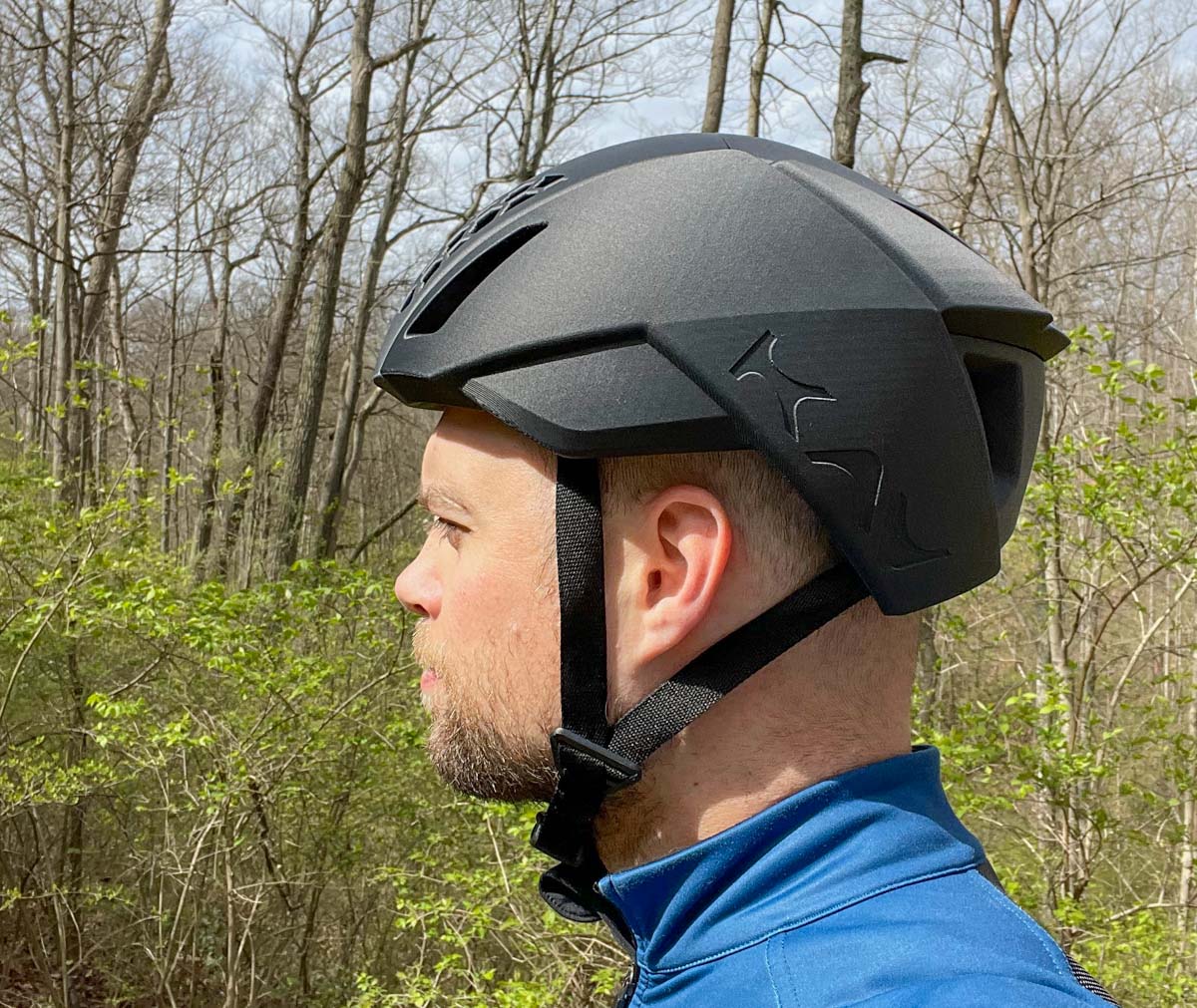 The spring-loaded padding allows for some room for your fit to expand or contract based on cutting your hair, wearing a thin hat, etc. It’s still more limited than say a retention system, but it allows for a custom fit helmet with a bit of breathing room. I wouldn’t be able to wear this helmet with a winter cap underneath–a thin summer weight cap is about all that I could fit comfortably. Something to consider before purchasing. It is a bit bizarre to put on a helmet and feel like it’s properly fit without having to adjust anything. 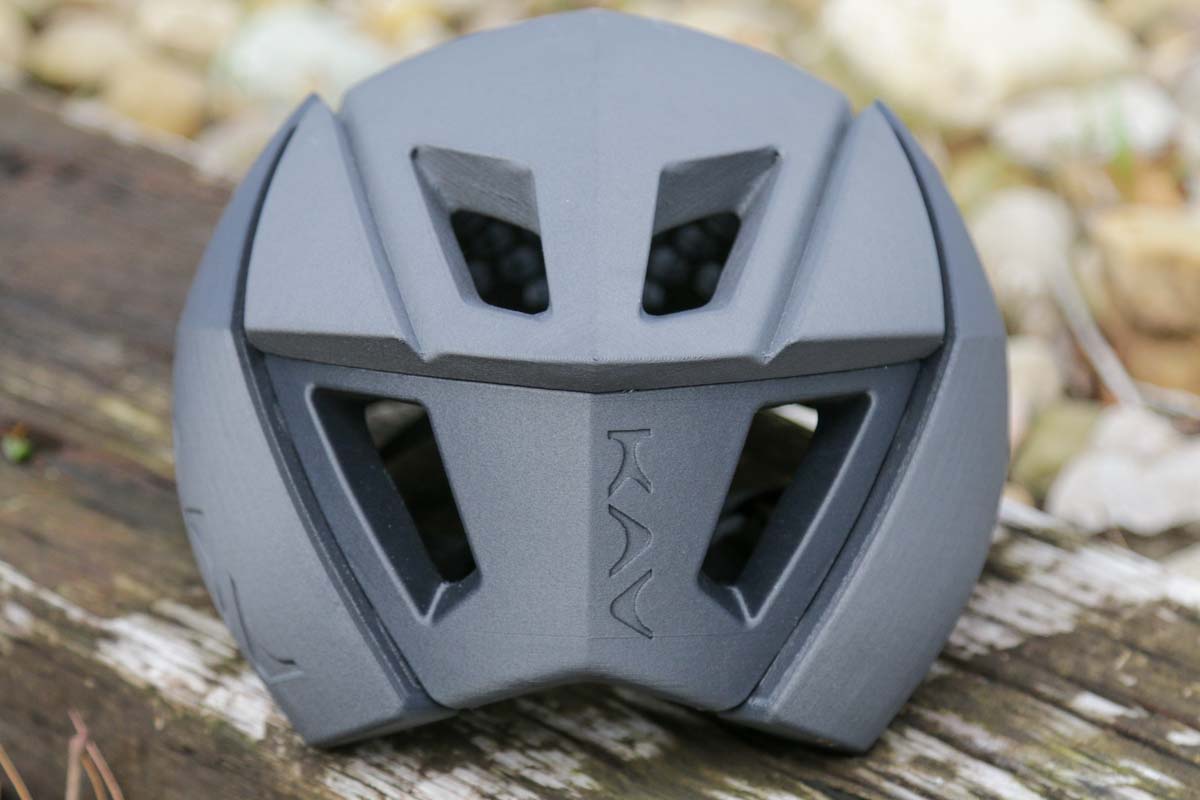 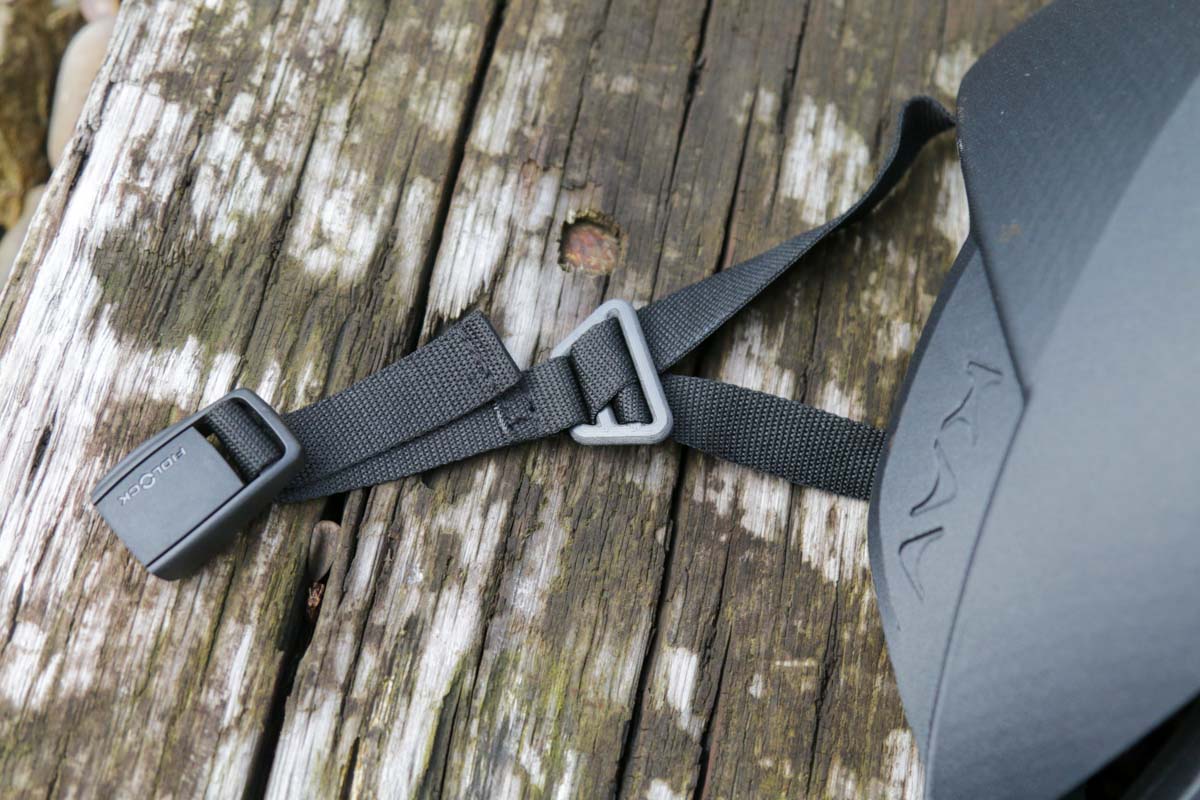 Compared to version 34, version 65 has other improvements like better straps with 3D printed ear cradles and a Fidlock magnetic buckle. There have also been reinforcements added around the rear vents to prevent rocks from working their way in during a crash on gravel. 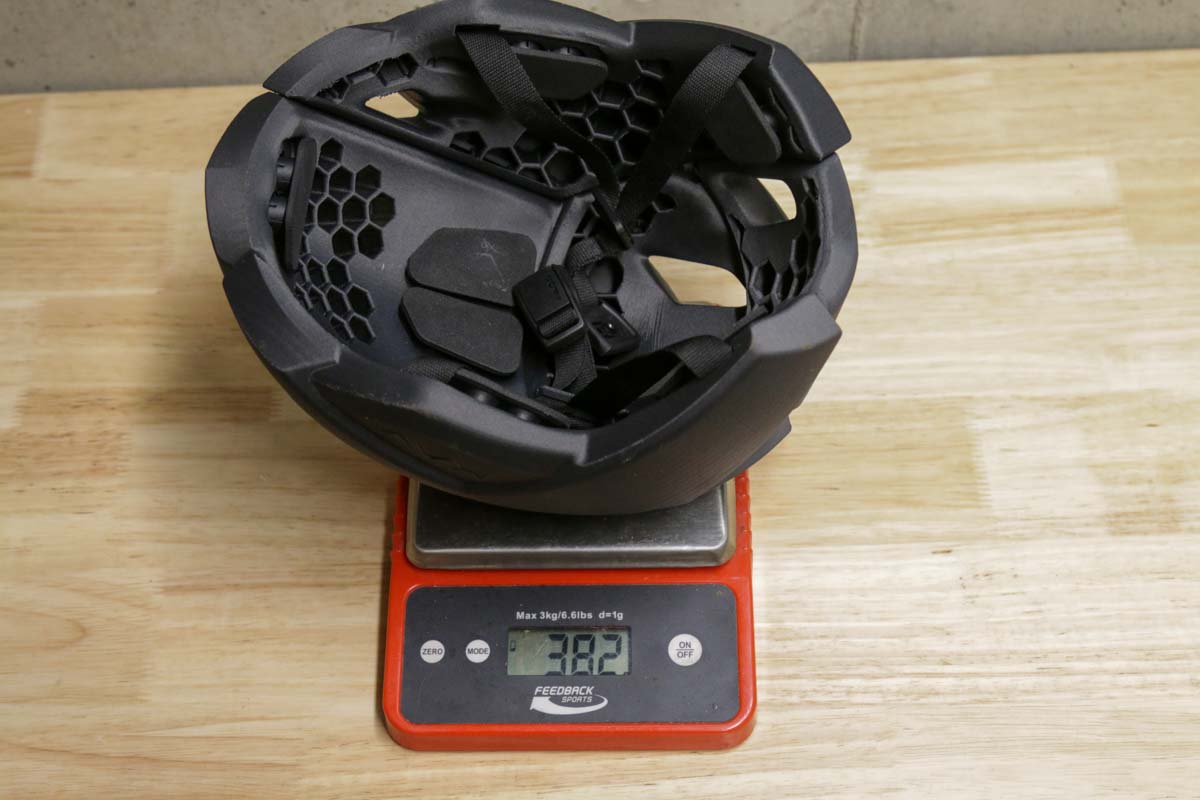 All the changes to version 65 did increase the weight a bit, with my sample weighing in at 382g. I’m typically a size medium helmet, which puts the weight of the Portola on the heavier side of road bike helmets. Though you do have to consider that the Portola is probably more durable than a super-light EPS helmet. 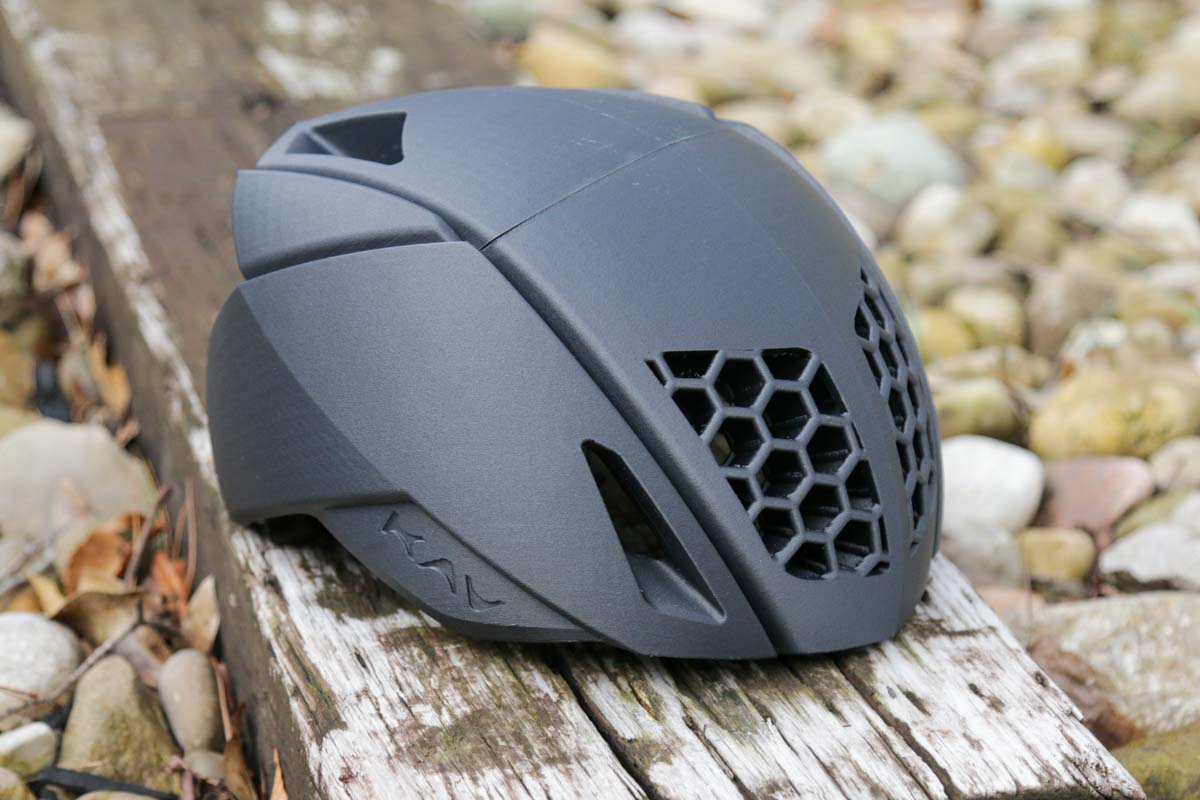 Priced at $390, it’s also on the expensive side for road bike helmets, though it does include a 5-year warranty and free crash replacement program. Based on the price, weight, and sizing limitations, at this point, it seems like the Portola is best for riders who struggle to find a comfortable fit out of stock helmets, and probably those who don’t ride in the cold. But based on the rapid improvement in just 6 months from v.34 to v.65, it’s clear that KAV can quickly react to consumer feedback and will likely have an even better helmet in the near future.

I havent worn that one yet but it looks nice and good.

I have a Hexr custom helmet and it’s a game changer. I had previously never found a long enough oval helmet that I could wear pain free. This one fits better and is way smaller since I don’t have to size up to XL for the length when my width is more medium.

382 g is on the heavy side, but if the weight distribution is sorted out well it shouldn’t be tiring on your neck to wear. This was my experience on the Lumos Ultra, which is slightly over 400 g for a MIPS unit. Have you taken this KAV lid out on a ride yet Zach?

Not yet, just got back from Sea Otter. Will report back as soon as I do.

Any plans for KAV to offer a different color option? I would definitely be interested in a blue one.

For teams and clubs, we do custom vinyl wraps that can accommodate custom designs and are looking to create additional color options as we get a lot of requests as you can imagine.

Because helmets meet certifications to be sold (CPSC, ASTM, ETC) based on particular headform/sizes/etc, how in the world does this pass testing requirements if the shape changes for each customer?

Right, never ever it is possible to pass these testing requirements, sorry. But i hope you will work on this.

Short answer is it’s complicated. We have our own lab and have certified our helmets to the CPSC standard (specifically 16 CFR Part 1203) which is more stringent than the EN1078 which is why helmets weigh more in the US) but it’s important to us to have a 3rd party conduct the tests as well even though it’s not required and rarely done in the industry. We’ve gone through over 1000 impact tests across and it’s one of the reasons why the helmets are more expensive. HTH.

Happy to discuss DM @kavsports on IG or contact us through our website. We’re also publishing more info on this as it’s a common question which will likely be a blog post on our site.

I like the concept, but as usual with these “Print all the things!” products, the end result just isn’t as good as the same product made in a traditional way. After 20 years in and around shops, I’d wager 90% of the people that THINK they have unusual heads would be fine with a pad kit and proper fitting at purchase. If you still need to have a zoom call with every customer to get the fit right, even $400 is going to be a losing proposition.

This could be lighter, less expensive, meet all the certs, and not just battleship grey if they went with more traditionally made shells and primary foam and used 3D printing to customize the fit. The end result would likely be a bit less svelte, but they’d end up with a product far less labor intensive to produce, something that can be broadly certified, appealing to a much broader audience, and probably hit a sustainable cost while still having that “wow it’s 3D printed” factor for the people that don’t understand how little benefit that actually brings…

Hi Gordo – You have a lot of great ideas, would love to continue the conversation if you have additional thoughts – easiest way is to DM us a @kavsports on Instagram or contact us on our website.

For everyone else here, we had similar thoughts 3-4 years ago when we started this and learned some surprising facts as we tested with hockey players and now cyclists. We found that just because a helmet fit didn’t mean it was optimal or even acceptable. A classic example is someone with a narrow head, buys a helmet based on length and then finds they look like Toad in the helmet, not to mention increased drag and suboptimal impact performance. For anyone who has customized their bike with different components, crank lengths, handlebars, stems, etc, pays a bit more for a nicer better fitting kit and cares about their head, we’re worth a look.

Separately, going all in on 3D printing opens up a world of design and protective options unavailable with injection molded foam. It’s a bit like whether you want a Prius or Tesla. Prius are great, but you only get the full benefits of lower maintenance, better acceleration, more space, eliminating gas and lower complexity with the latter. It is more expensive initially as is manufacturing responsibly in the USA and like any early technology there are some trade-offs but those will diminish over time and costs will improve as we recoup 5 years of R&D. The best is yet to come and it’s core to our mission to save as many brains as possible which means making our helmets more accessible.