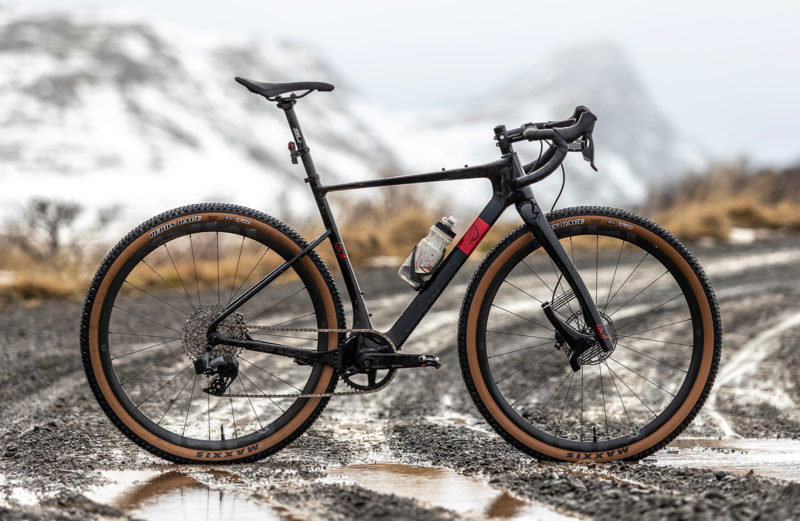 The new Lauf Seigla takes everything that was good about the True Grit gravel bike and makes it bigger and better. With improved frame compliance, massive 29×2.25″ (700×57!!!) tire clearance, and arguably better looks, it’s a winner out of the gate.

And, despite the huge new max tire compatibility, they were able to maintain the same geometry, with tight chainstays, without going to extreme tube shaping. The new Seigla, which is simply Icelanding for “true grit” looks to be a worthy successor to their original gravel bike… 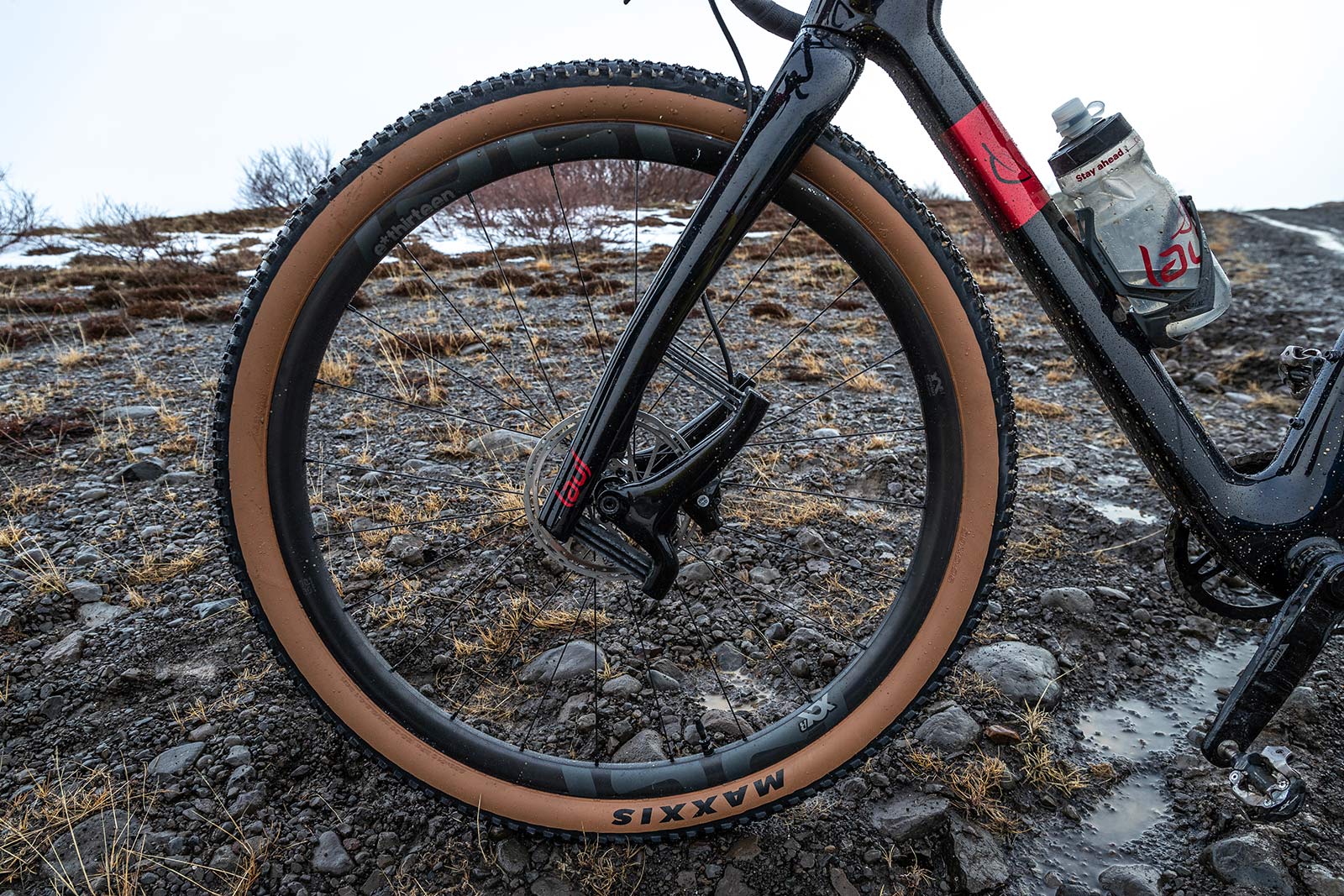 But it’s not just the frame that’s new. The heart of Lauf’s bike has always been their leaf spring fork. Offering just 30mm of undamped, friction-free travel, it’s about 600g lighter than the lightest new telescoping gravel suspension forks.

If you’ve never ridden one, just know this: You’re only likely using 15-20mm of the travel during normal riding. And because there’s no friction from seals and bushings, it can react immediately to the most minute of “impacts”, effectively killing vibrations and smoothing the gravelly gravel out of gravel roads. Washboards nearly disappear. And no, it doesn’t bob about awkwardly sans damping. 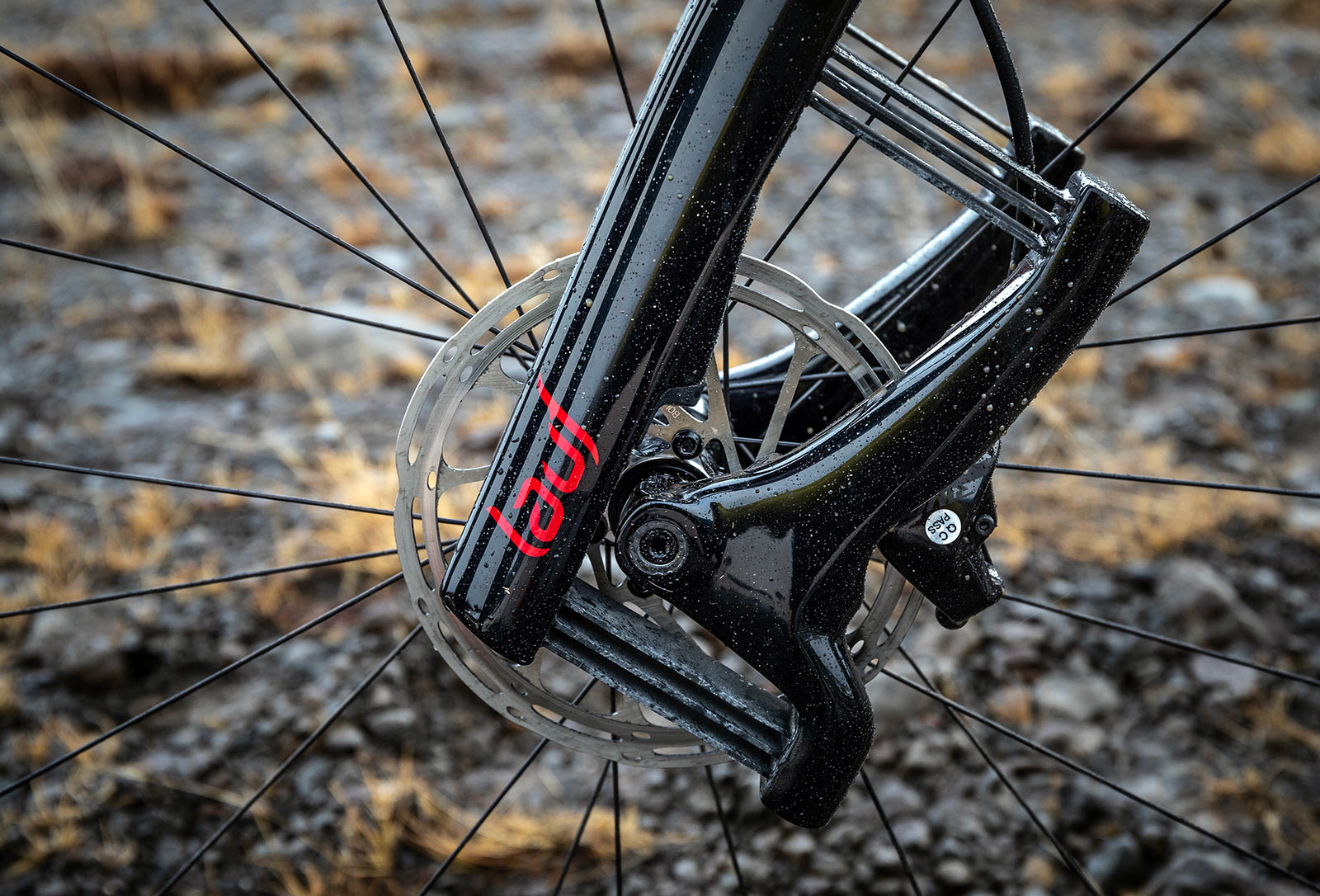 Now, it’s even better. The carbon-and-S2 fiber leaf springs carry over unchanged. But, they’ve finally switched from a 15mm thru axle to a 12mm thru axle. In the early days of gravel, many riders were simply using lightweight 29er XC wheels (gratefully being able to repurpose their non-Boost MTB wheels), so 15mm axles worked.

Now, with a wide array of proper gravel wheels that are only offered with 12mm thru axle compatibility, Lauf wanted to make sure you could use any modern wheelset on their bikes. They stuck with 12×100, too, with no plans to go to “Road Boost“.

You’ll still need to run a 180mm rotor, though, as their design needs the extra space for the axle carrier. 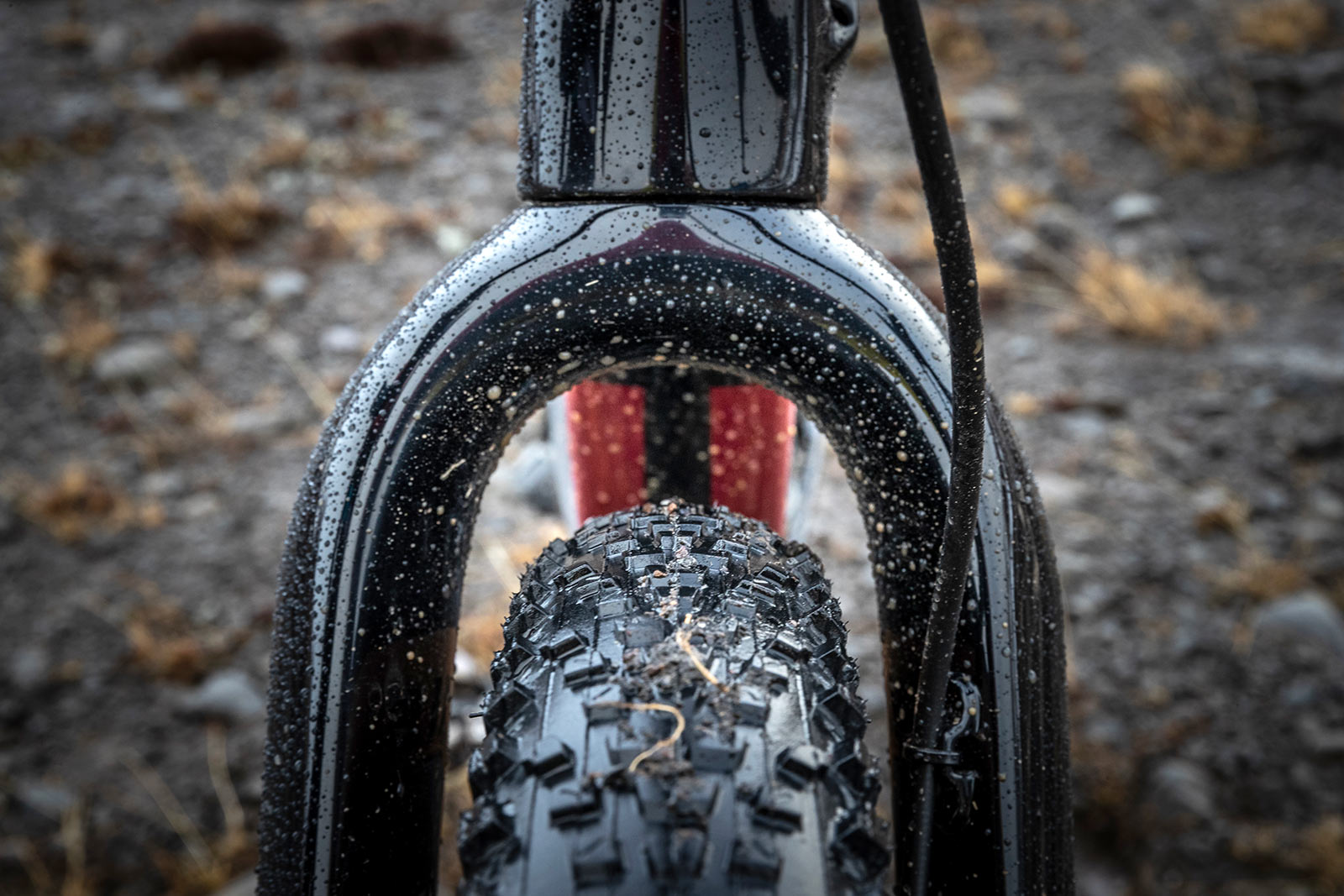 They also opened up tire clearance to match the frame’s max tire size of 29×2.25″, which is what’s shown directly above…and you can see how much room there is around the tire.

This update did require a slightly taller axle to crown measurement, which they made up for by making the crown itself slightly shorter and tweaking the head tube height and design. The end result is just a 3mm total increase in stack height.

And a fork that weighs exactly the same as the prior model despite being stiffer. The “dropouts” are lighter than before thanks to new, lighter internal cores, which offsets the weight gained at the crown…which also means less unsprung mass for even better performance. 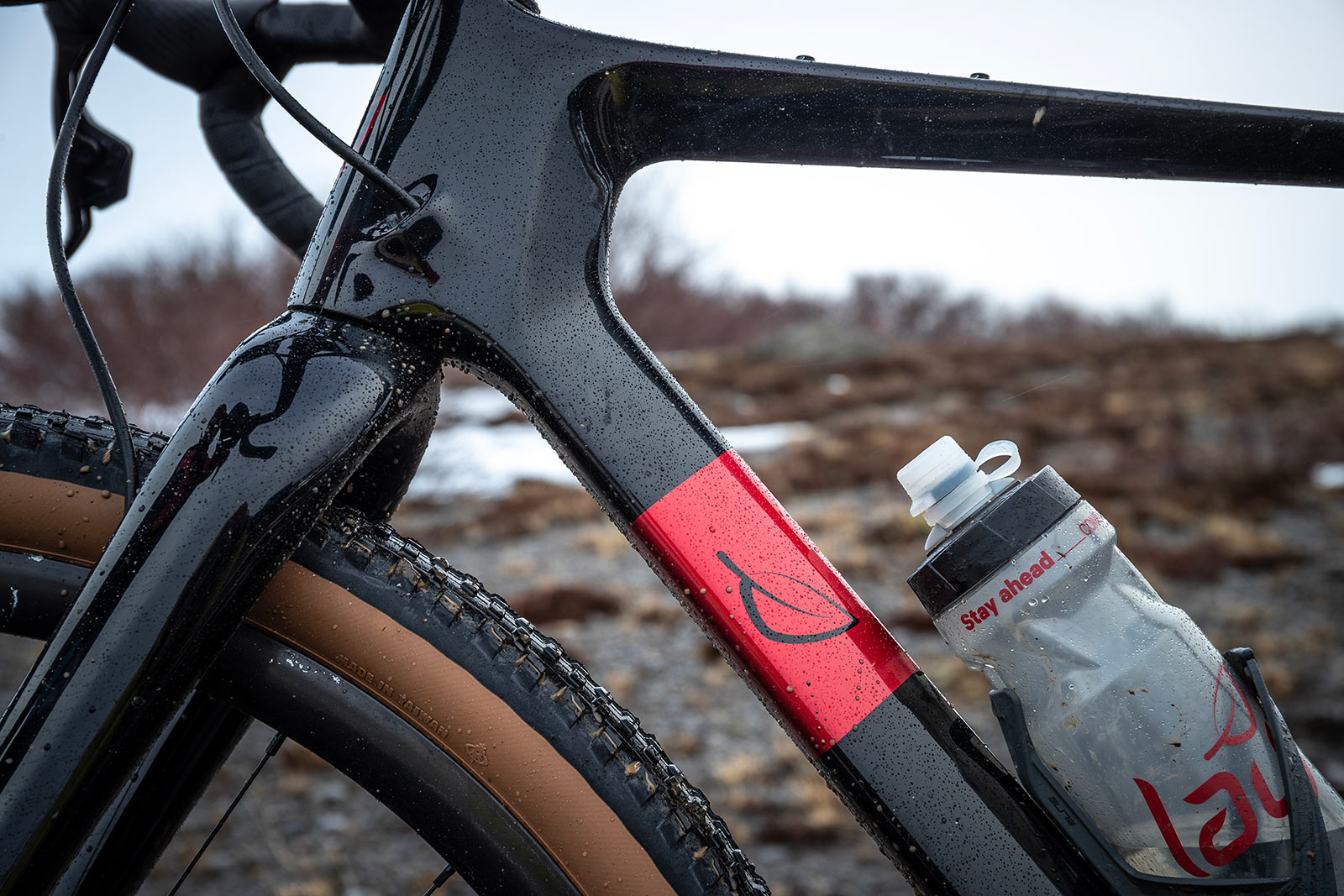 In fact, the geometry is virtually identical to the True Grit. Lauf says they (and their customers) really liked the way the True Grit handled, so the didn’t want to mess with that. 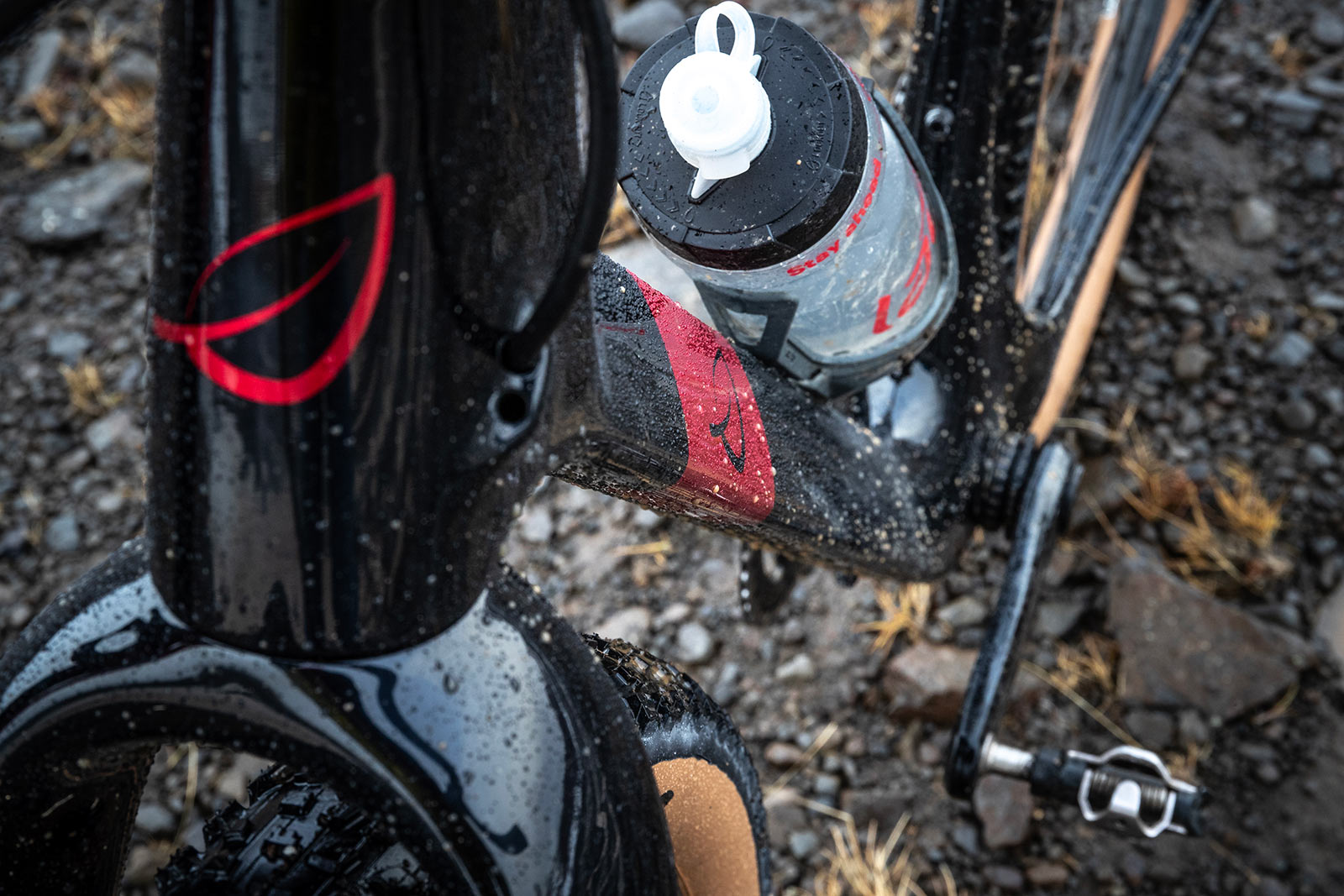 But they did reshape the tubes to make it sleeker and stiffer. A deeper headtube and more triangular downtube add torsional stiffness… 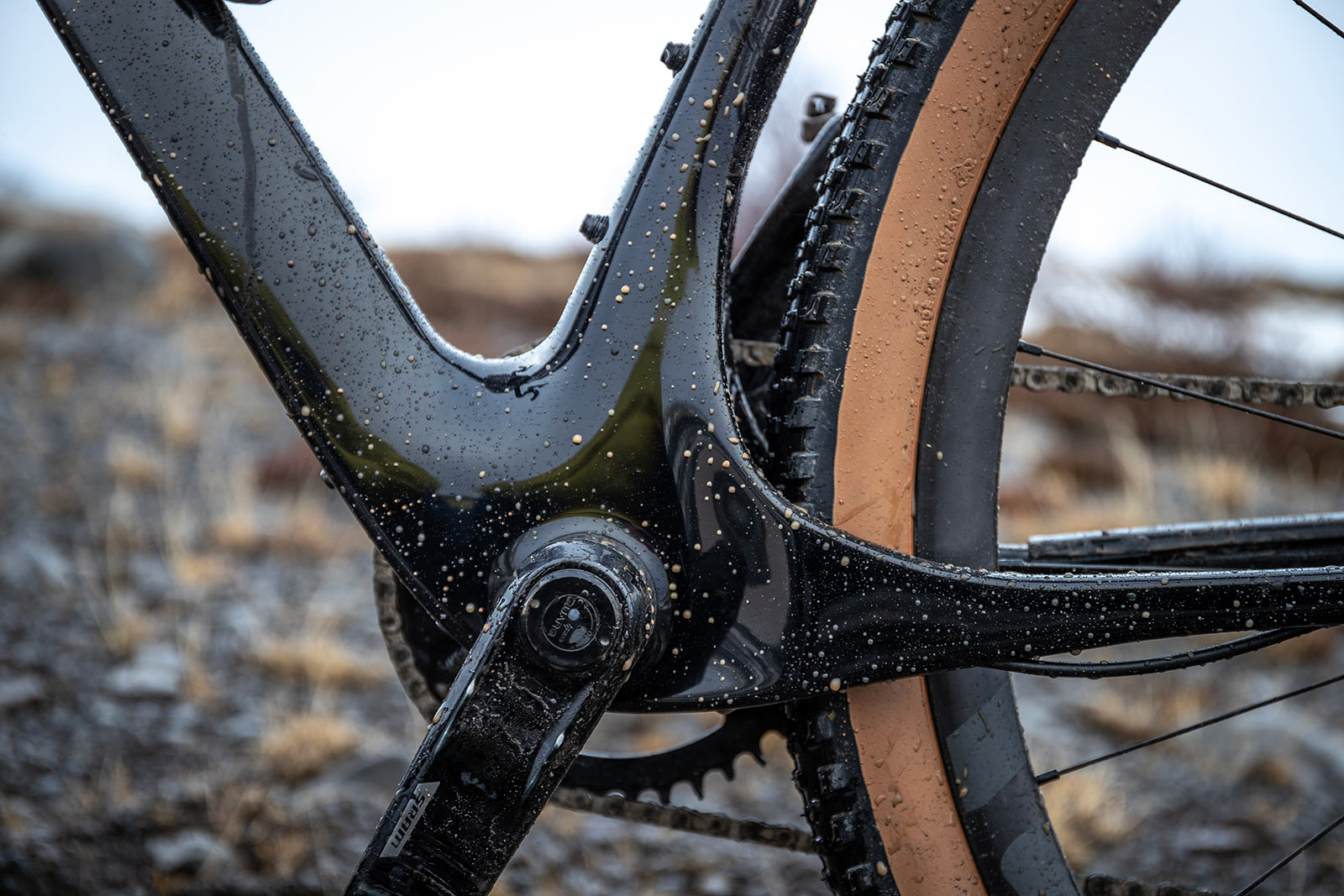 ..while a bolder bottom bracket shell maximizes power transfer. And this is where it starts to get really interesting. The chainstays are very thin looking from the top down, going to a solid carbon section on the driveside to get as thin as possible without giving up any strength or stiffness.

The BB section itself is wider than normal, using a 73mm threaded shell that relies on “custom” 73mm DUB spindles from SRAM. Lauf says they’re the first bike to get SRAM’s road cranks with a 73mm wide spindle, which Lauf requested, but that they’re sure other brands will latch onto this width…

…because it maintains the narrow Q-factor of road cranks while allowing for a wider stance to improve tire clearance. On this frame, the overall design means it’s limited to 1x chainring setups and (for now anyway) SRAM cranks, which is why you’ll only see SRAM Rival, Force, and Red builds. They’ll also only be offering AXS wireless builds, too, which brings up another interesting design consideration: 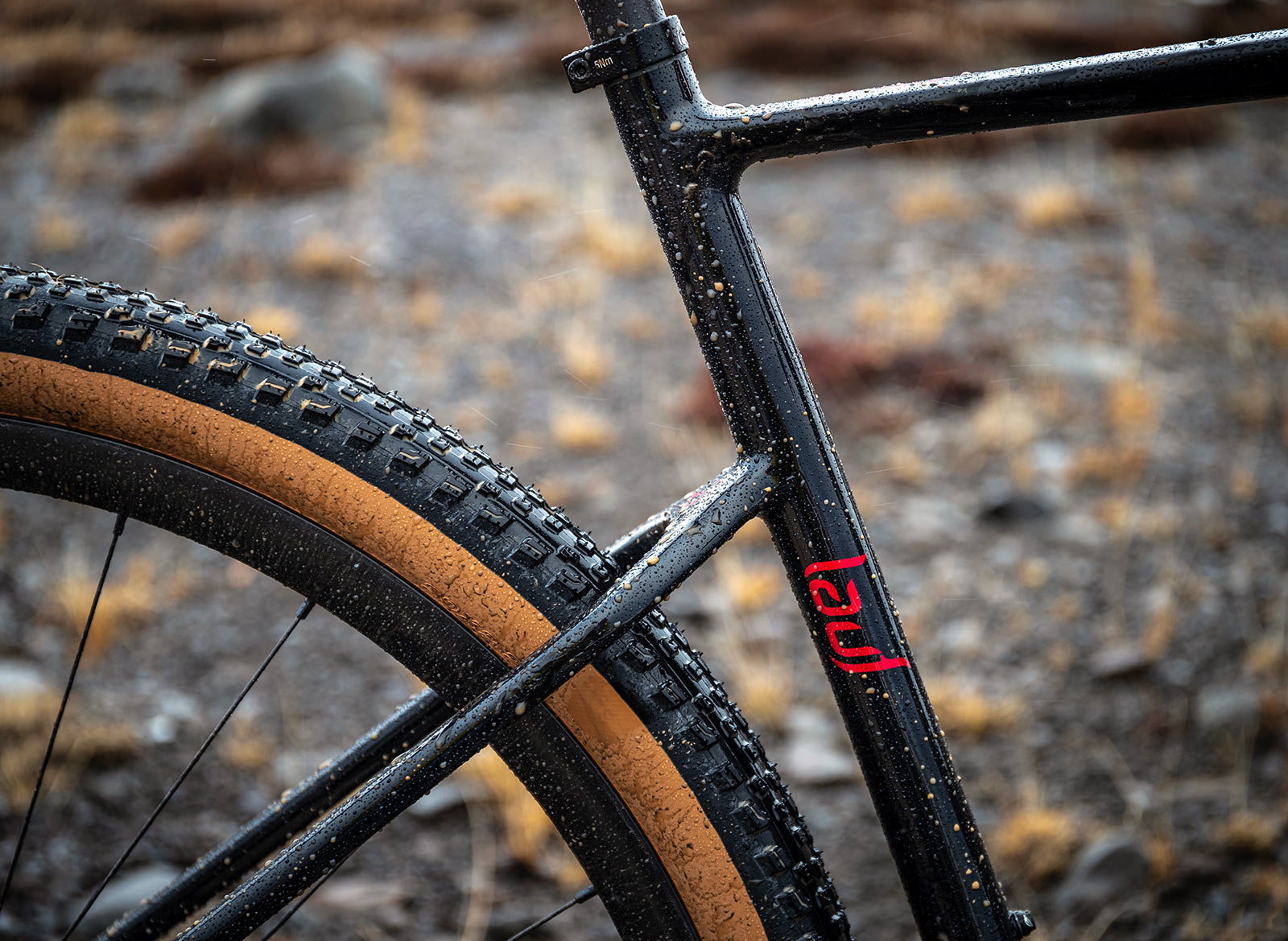 It’s not technically compatible with dropper seatposts, unless:

While Lauf’s president, Benedikt, says it can be done safely, it may void the warranty, and you’ll want to be suuuuuper careful not to drill too far and have it pop out the other side of the frame. We talk about this in our podcast interview with him. Subscribe to the Bikerumor Podcast wherever you listen to hear it and more about the new Seigla.

Benedikt says there was definitely some dropper post interest from within the ranks, but in the end, the bike is designed as a race bike, and the decision was made to keep it as simple as possible. 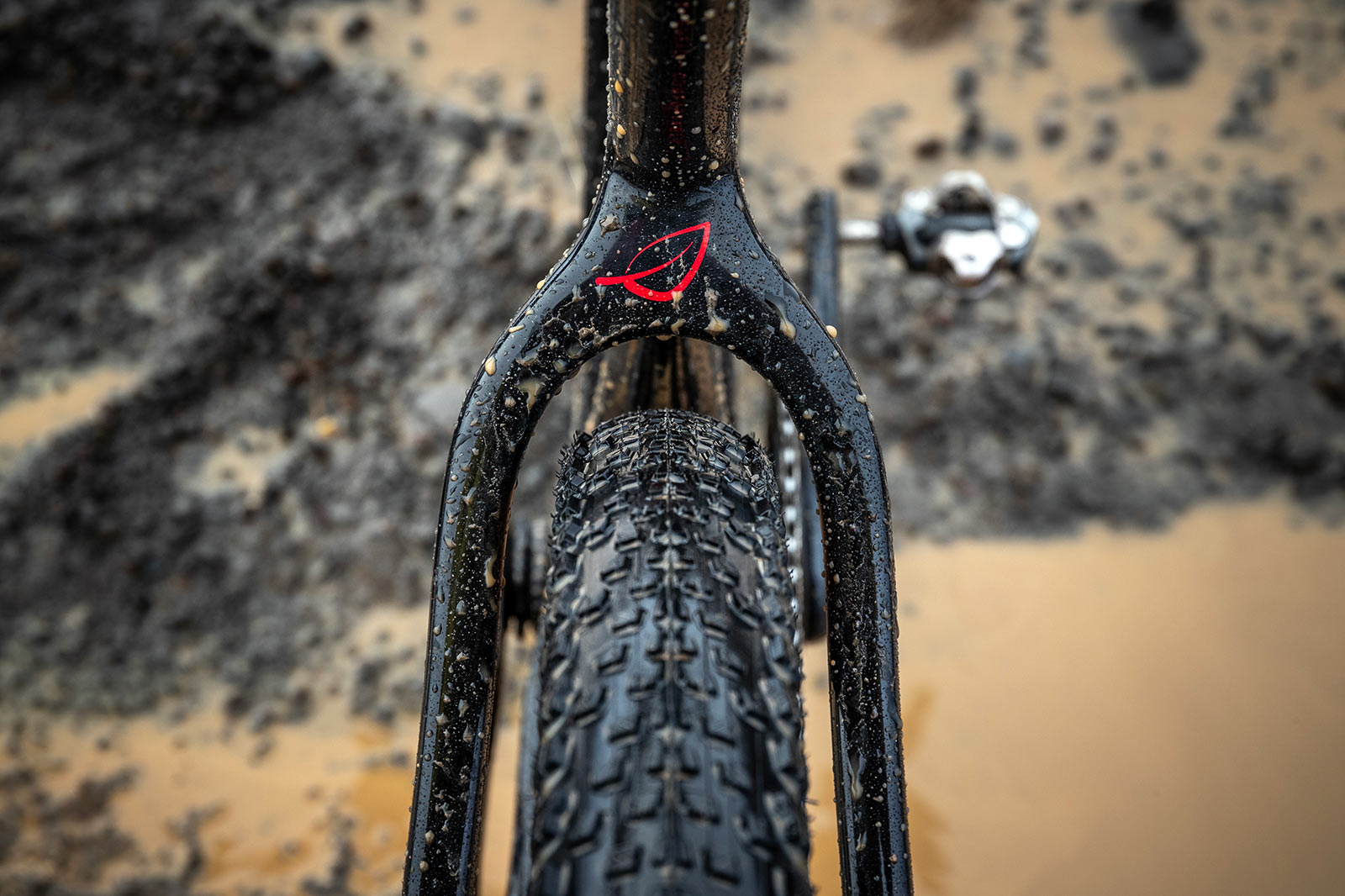 However, they also wanted it to be as capable as possible, hence the added compliance from dropped, flatter seatstays and the massive tire clearance. Combined, they should make the bike able to handle the gnarliest terrain, while letting you dial back the tires to suit less aggressive courses. 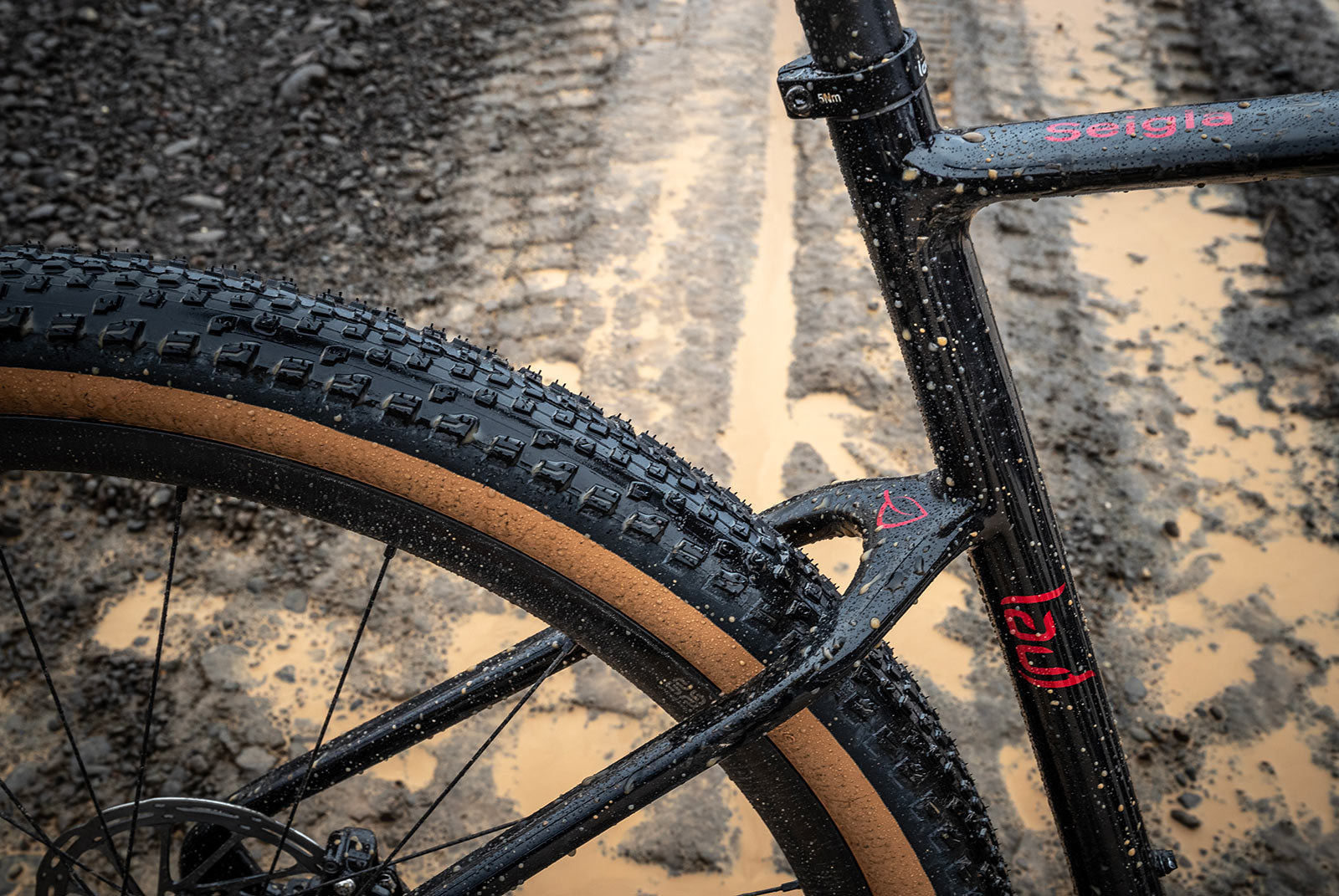 The added rear compliance comes from several design features, and they say it’s as compliant or more so than fancier designs with pivots (think Trek Domane or Cannondale Topstone).

First, the top tube flattens out as it hits the seat tube, making that junction more flexible. Second, the seatstays are flatter, but they also hit the seat tube much lower. Combined, these two spots acts as “virtual” pivot points.

Third, the seat tube itself is angled rearward more – it has a slacker actual angle, its centerline meeting the downtube slightly in front of the bottom bracket. This lets the rider’s weight “flex” it more easily, than if it were more vertical, all of which is accentuated by the other design features.

Another key point about the frame: It uses standard carbon fibers, not high modulus. Benedikt says that while Hi Mod fibers are stiffer and lighter, and even resist crack propagation better, they’re not as tough or durable.

They’re often used for bikes that need to be as light as possible yet still past ISO testing, but don’t offer the impact resistance and engineered flex that Lauf needed for a bike like this. But, they say their careful layup and good manufacturing process still let them make the bikes light. Here’s the full builds with claimed weights:

Note that they’ll sell the bike with both their Grit suspension fork and their JAF (Just A Fork) rigid fork for those wanting more of a long-distance road bike. Claimed frame and fork weights are:

They lost me at 1x only… which is a shame because otherwise, I’d be pretty interested.

Seriously, I’m also struggling with the road stance claim.. I’m reading it more like Whites solution of road arms on a mountain spindle, so you end up with a tweener. I run wide spindle ISSI pedals on my grx because my hips need a little more stance… But no one needs another ‘standard. ‘

Any idea how one would mount shimano cranks (with a decent size chainring) on this bike? Seems impossible, unless I am missing something?

So anybody know if this is compatible with ANY modern shimano cranksets with decently large chainrings? Seems like none would fit.

Any MTB cranks will fit. It’s just a 73mm BSA BB. You can get 42t chainrings for MTB cranks.

It is simply a non-boost mtb crank (6mm offset)

Guys, this is just a mountain bike. Save yourself the wait and just get a carbon hardtail frame from about 2012 and mount a drop-bar kit. Same-Same, but with maybe even better tire clearance.

“Road Wide” has been on offer from SRAM for years. It predates all of AXS. I don’t understand why Lauf thinks they’re the first.
Using Road Wide on a 73mm shell frame instead of a 68mm frame with extra spacers might be novel, I’m not sure. But there have been several gravel and gravel-ish frames with 73mm shells as well. They typically spec MTB cranks though.
SRAM is not even the only one offering Road Wide. Rotor has also been offering it for at least a couple years.

So it’s got huge tyres to cope with more extreme terrain but you have to void your warranty and drill a hole in your new frame if you won’t cough up for an AXS post… I’m out.

You would be crazy not to cough up for an AXS XPLR post when you already have the AXS shifters though. It works so well and the weight is competitive once you account for a mechanical lever, cabling and the likelihood that an extra AXS battery would be stored somewhere on your bike anyhow.

It looks intriguing; however, I’m wondering why they decided on an old cyclocross-style BB drop of 65mm. With large tires you will be perched up there. It’s an odd choice for a gravel race bike, where competitors have drops in the mid-70’s.

Monster cross is back! Think I’ll stick with my mtb and the True Grit coming to me soon for gravel roads.

can’t wait to see more and more frame manufacturers sell 73mm bb shells as “road wide” instead of what it’s been known as all along.