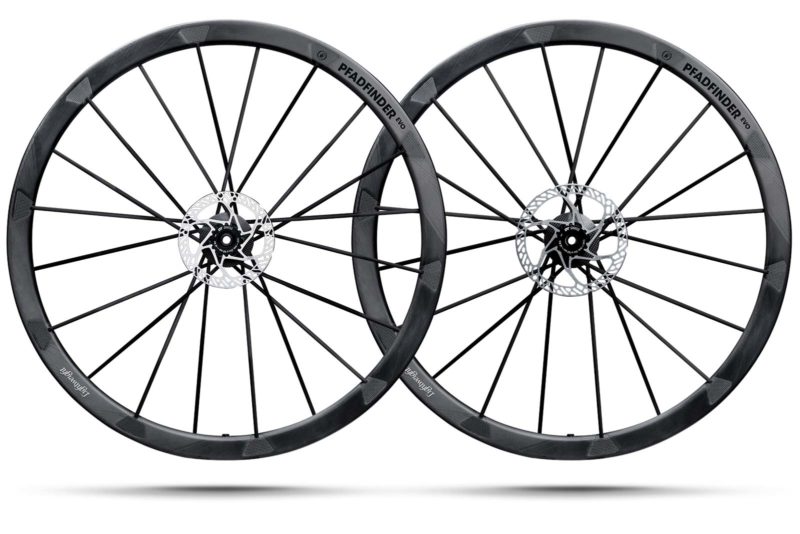 The new Lightweight Pfadfinder EVO wheelset is disc only, with carbon rims braced by 20 carbon spokes, front and rear. Based on the Wegweiser EVO, the Pfadfinder EVO gets a 36mm deep rim is said to have a low sensitivity to side winds.The wheels have an 18.2mm internal width rim (24mm outer) which is said to allow the fitment of tires up to 40mm wide for additional riding comfort, but down to 23mm wide too. That rim width is narrow for road wheels, let alone gravel, so these certainly aren’t chasing the fad of ‘wider is better’.

The carbon rims themselves are made up of special high-modulus CFRP fibers (carbon fibre reinforced polymers) with the layup specifically optimized for significantly increased robustness. Lightweight say these rims have an outstanding stiffness to weight ratio, with a complete wheelset for SRAM 12 speed gearing weighing in at a claimed 1430g. 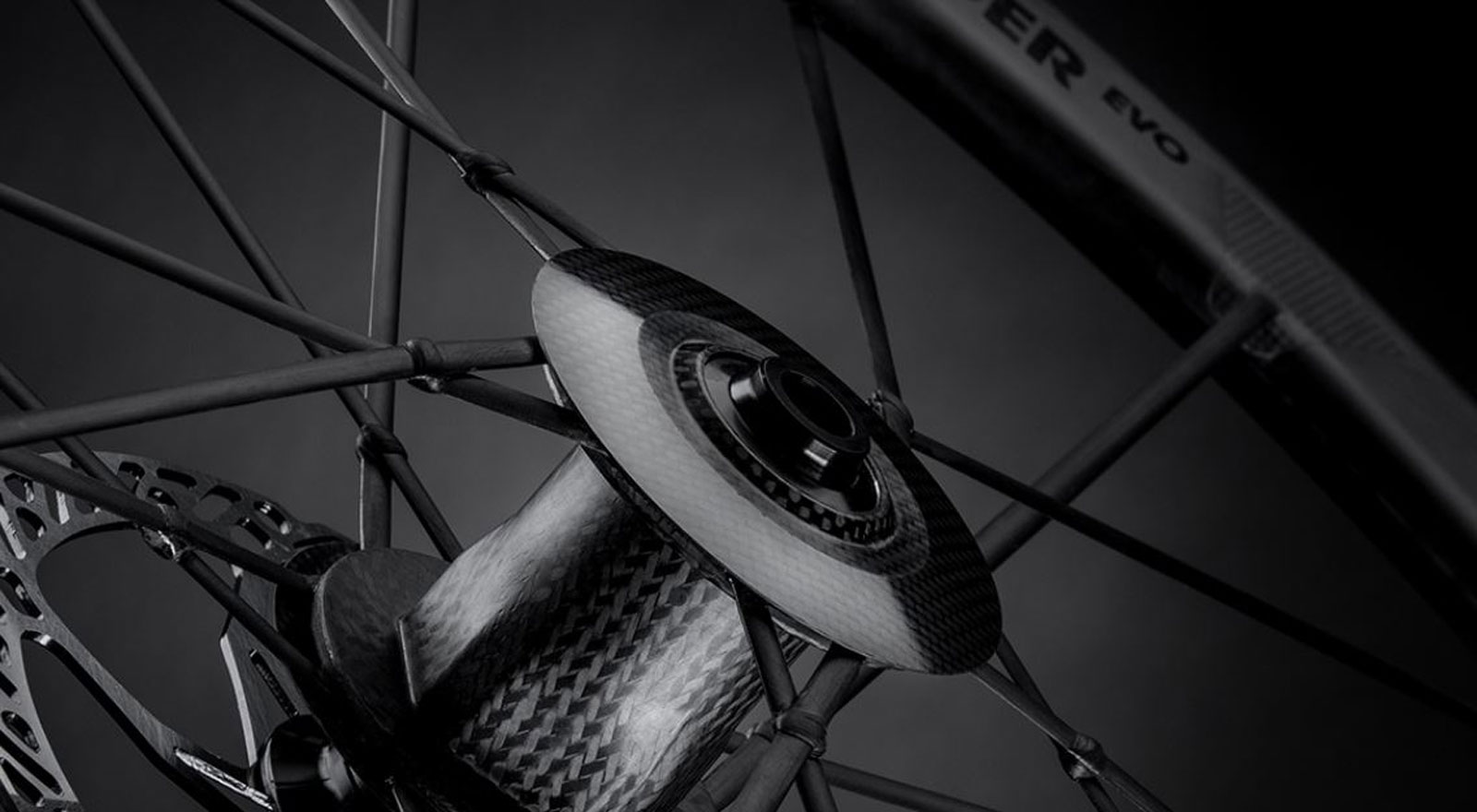 Laced to the rim is the Pentagon Hub, also seen on the Meilenstein wheelset. This was developed to be stronger and safer, able to withstand the braking heat generated at the hub due to the disc brakes. It uses a hub shell with 5 sides instead of one that is round. This means the hub shell is held in place not only with the bond of the epoxy, but also with a mechanical bond of the flanges around the pentagon shell.

The Pfadfinder EVO will be available in standard and Schwarz ED. The latter is the premium option with black decals and lower friction Ceramic Speed hub bearings. The wheels are compatible with SRAM, Shimano and Campagnolo groupsets.

garbage. I don’t need or want a stiffer wheel for gravel riding. My Current wheels are lighter, have replaceable spokes and can be serviced by me or at any shop.

18.2 mm internal? My road wheels are wider then that. Being that its a lightweight product, it will probally be nearly $5000 for the whole set. I could go with a pair of HED Emporia GC3 Pro’s which are lighter, nearly 8 mm wider internal width, and can be serviced anywhere. Heck, I could buy 2 sets of the HEDs and spend less money than these.

How stoked are you to put 40mm tires on a rim with internal widths that resemble road wheels from 20 years ago? Raise your hand.

Only Ballers need apply for these bad-boys.

What is the excuse from Lightweight for the narrower width rims? Is this an intrinsic limitation of their spoke and rim construction? I really don’t get it. Especially the consideration for 23mm tires on disc brake wheels. 25mm is about the narrowest that you’ll see on bikes these days, only on “road” bikes, and the 23-40mm range is wide enough to disrupt handling on most gravel bikes. Narrow tires *fit*, but it’s not great, and a smooth tread has nearly the same effect. When you want the 23mm tire ride, you really want something svelte, so you’ll use a dedicated bike for it. If they made a wide, lighter rim, with a modest pressure limit(75psi when tubeless), they’d have the eyes of wealthy gravel riders for sure.

I’ve always liked their aesthetic, but the specs really need revision. These aren’t even that light.

Anyone else find it funny these are gravel wheels essentially called “Fad Finder?” I wonder what fad they will find next?

I was expecting lighter than 1430g for a full carbon wheelset. My road/gravel wheels weigh 1150g with regular spokes.

These comments! You guys killed it (Lightweight what were you thinking?…) I was gonna wait ’til morning, but I’m off to the garage to read the comments to my bike, which is just about as crazy as these wheels.

Although, they are nice to look at.

Wider is better a “fad”? I think it’s a trend. Fad is a blip on the radar, trend is long term changes and evolution. Wwider road rims came about in the early 2000’s by Am Classic, Hed, Velocity. Just by concept of time alone this is a trend. Just take a look where we’re at now. We’ll all be riding 29″x3.0″ gravel tires soon, and lightweight might concede and stretch out to 21mm internal widths by then, lol.

They would have been better off marketing these as tough road wheels for the Clydesdale set running 28-32c tires.

For those mocking the name: ‘pfad’ is German for ‘path’. Nothing to do with English ,fads’