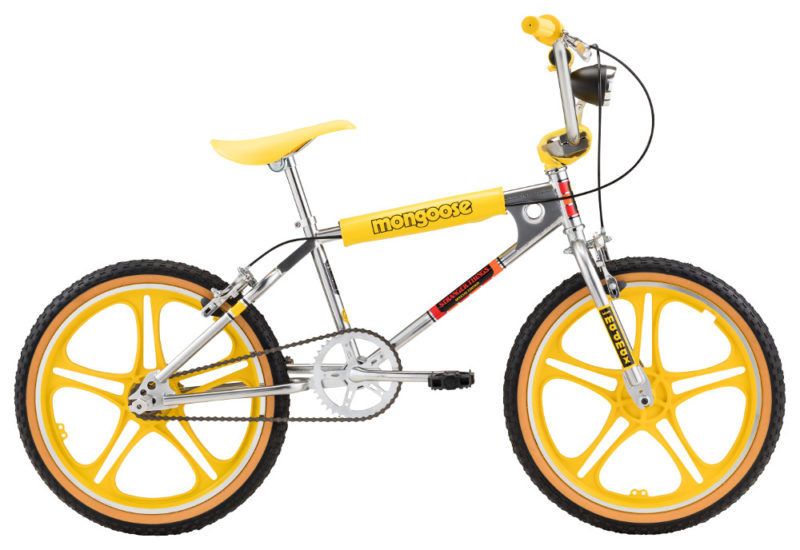 If you didn’t act fast, you probably missed the last Stranger Things character bike from Schwinn that sold out within hours. While the Lucas bike replica looked very similar to the one used in the hit Netflix Original Series, those more familiar with BMX bikes couldn’t help but notice that the bike used in the show (based in the 80’s) was a modern BMX bike built with a few retro parts. For season three, things are a little different… 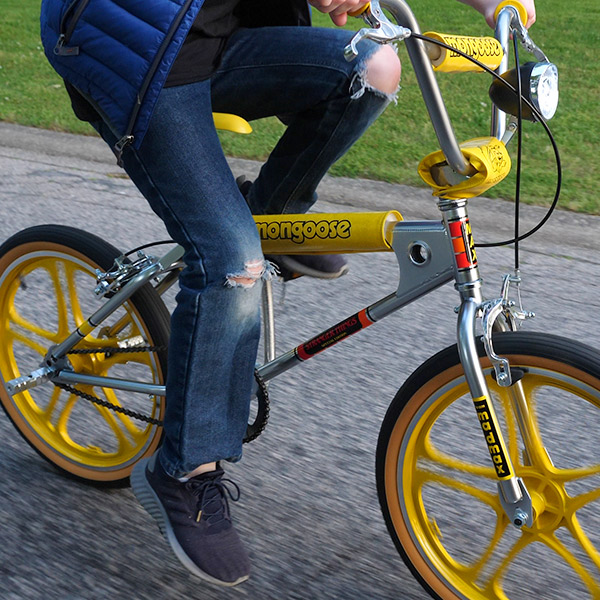 This time, Netflix enlisted the help of Mongoose to source period correct bikes and parts from local sources to create the actual bikes used for filming season three. With creative guidance from Netflix, the Mongoose team found the parts and built the bikes in their Madison, Wisconsin headquarters and then shipped to Netflix to begin filming. 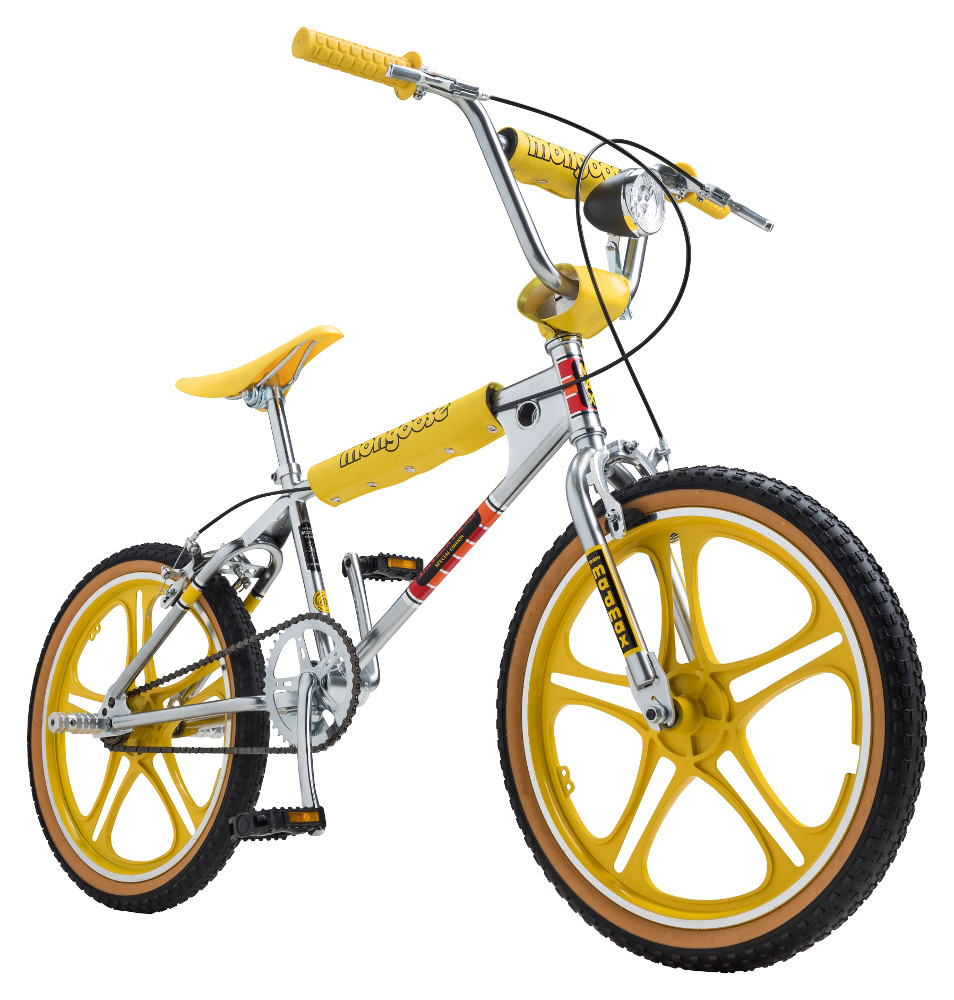 From there, the Mongoose team took the period correct bikes they just put together to inspire a replica model of Maxine ‘Max’ Mayfield’s bike to sell to the public. This is the third Stranger Things Character bike and as mentioned is very similar to a Mongoose BMX bike from the 1980’s, right down to the plastic seat and 5 spoke mag wheels. Unlike the first two bikes, this one will be available in stores – starting on June 30th, you might just be able to find one of the Max bikes at Target for $219.99. But if it’s anything like the first two, they’ll be gone before you know it.

Nice. That was one thing that really bugged me in the first season. It would be like a WW2 movie and someone whips out an iphone.

Few years ago a buddy of mine who owns a shop got a GT Pro Freestyle Tour (limited edition classic edition)…it even came with Saran Wrap on the tires to keep them clean…an outlandish price. Now, a few years later the saran wrap over the tires is tattered and covered in shop ‘stuff’…the bike is at 50% off and still cant get anyone to even sniff at it….

I’m interested in the Gt. How can I get in touch with your friend? Red2872 at aol

I’m interested in that gt pro freestyle how can I get it
Road stain?

Ash
Reply to  B

I have a brand new one for sale

If your friend is still selling the GT I’m interested!

Also noticed the thread less stems as soon as the Bikes appeared on the show. There are still movies & TV shows using late 70s/early 80s “Ten Speeds” with the horizontal classic Safety Levers that never worked. But not bothering to get some yard sale bikes with real wear on them really stood out on a production design that got some many things of that era perfect. Not what somebody saw in a John Hughes flick but stuff used and a few years old, not brand new 1980 whatever year it is. But those pedal and wheel are not something I remember on Mongoose from that era. Plus pegs were rare in 83-85, so they could’ve rocked a super long All Thread with 10 nuts on each with a double washer spacer next to the REAL axle nut. At least until somebody’s brother at the local Tech High School machine shop throws some hex stock in a lathe and blows your mind with by not just threading the pegs but adding grooves and cutting a smooth convex dome on the end……….

I just got mine. Target was getting 2 per store.

Did you get the Max bike??

Awesome . Schwinn and mongoose aren’t a company anymore but hey keep praising how awesome both companies are at building bikes . That’s a Pacific cycle that’s just a huffy with a fancy name

roadstain
Reply to  Will aley

I want a Diamond Bake Harry Leary? Where can I get that?

Those shoes aren’t from the 80s

That’s pretty cool, BUT for $220 just understand that it’s prolly a mild steel frame and fork, versus 4130 chromoly or aluminum. I still own a lot of bikes, including 9 “limited edition remakes” of bikes I owned growing up and all of them were between $700 and $1200. BUT they’re all made of the same materials that the original bike was. And just a little FYI I’ve purchased all but one of them from Planer BMX out of Florida and they’re really cool folks, excellent customer service and any problems I’ve had were taken care of immediately with no hassles. (It’s only been a couple of really minor things) but still they made good on it painlessly. So if your looking for something like that check out their website, they’ve got a lot of cool stuffs from Skyway, SE Racing, Haro, Kuwahara, GT/Dyno, Hoffman, Redline, etc…. And if you’re looking for a real early ‘80’s mongoose I think my buddy still has 1 or 2 of those left and he just bought a huge collection of older stuff a couple of weeks ago, it’s all ‘60’s and earlier stuff. He’s on FB, names James King and he lives in Conroe Tx, I’m not gonna put any personal info on here but look him up if your interested in any of it, there’s pics of most of it on his page and you can contact him through there. Hope this helps you guys that are lookin for any of that stuff! Keep on BMX’n y’all!!

I had this bike almost, I had red skyways on it Sold t it to my younger brother and then he left it unlocked and someone stole it SOB…. luckily I still have my Diamond Back from 1983

Got mines and my friend have the original

Everyone talking about diamond backs like they were a good bike or something, I don’t get it they were cheap just like huffy.

Diamondback did make a good bike loved the silver streak and the bike here is steel not chromoly but the early mongoose was steel chromoly came later..

The best mongoose was the California if you really want a rare bike look up P.K ripper

Hey Michael Krause, do you have that info on your Buddy from Texas with the bikes? I can’t find him.

My first bike was a chrome Mongoose with the honeycomb wheels. Last bmx to buy was a pk ripper slapped with white Peregrine mags, great memories I have

Thats pretty cool..But not as cool as my original MotoMag 1. .yep..a set of the original motomag..pat pending..Havent seen a set before or since gaining mine near 20 years ago

PS. Had the bike too..but wouldnt ta know it..Let a nephew take it out to show off and it got stolen..Cut the lock and ofg they went. Just glad the rims where not on it. Had them being serviced for new bearings..