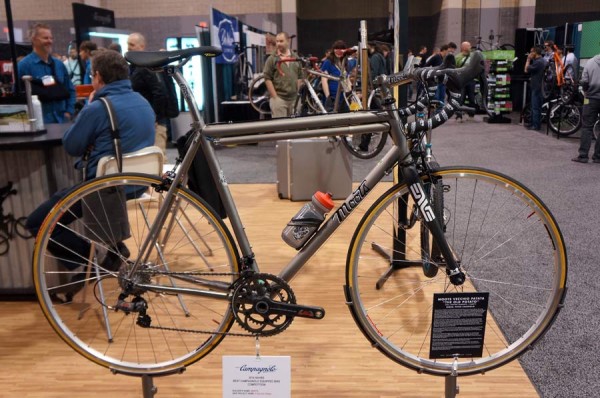 Moots wasn’t showing off any brand new models, but they did take the time to customize a couple of their existing bikes and roll out the massive Frosthammer 5″ fat bike.

In the background above, at the far corner of their booth, the built up a ‘cross bike with retro styled brown leather bar tape and saddle and added S&S Couplers, making for possibly the ultimate travel bike. In the foreground, their entry into the Campagnolo contest and shows their ability to really dial the details if you’ve got the coin. 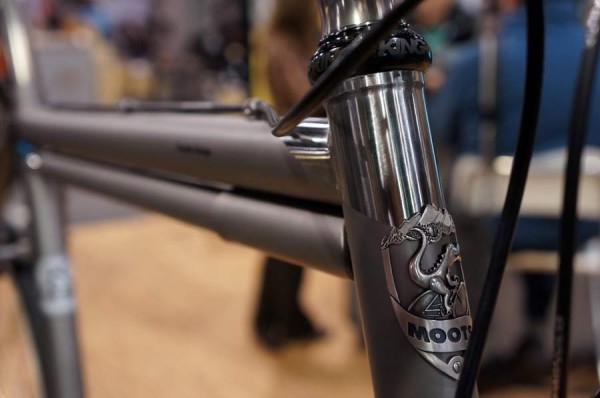 The Vamoots had several polished sections, with the head tube getting the only sharply defined bit. 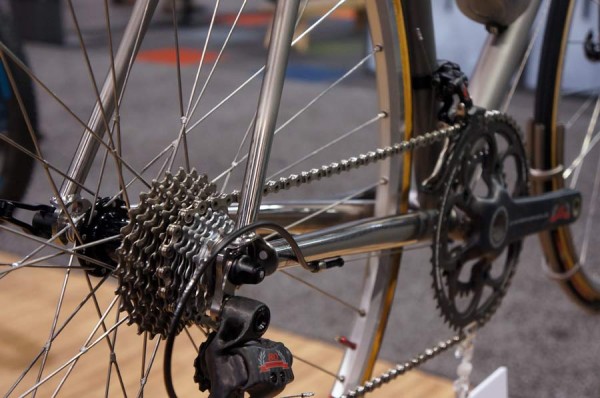 The rest of the frame faded from their standard bead blasted gray to a polished finish for a subtle transition. Chainstays were fully polished, which gave the bike a very classic look to match the restyled Moots logo…

…in the style of Campagnolo’s cursive font. Click to enlarge and check out the tube caps on the seatstays. Even the frame pump was finished in titanium to match. 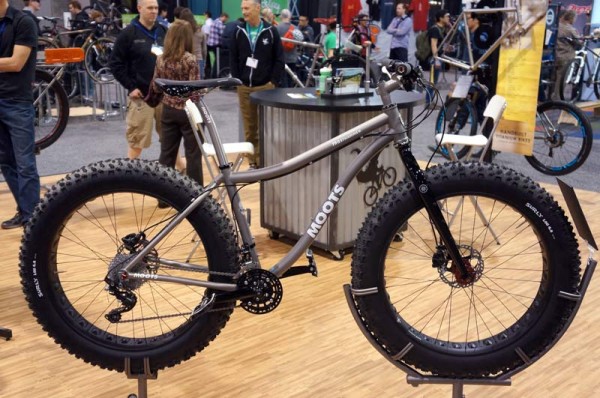 The Moots Frosthammer wasn’t launching at NAHBS, but it’s the first time we’ve seen it.

The FrosTi “standard” fat bike is still available for those only “needing” about 4.25″ of tire width. If you wanna run the full 5″ rubber, you gotta drop the hammer. 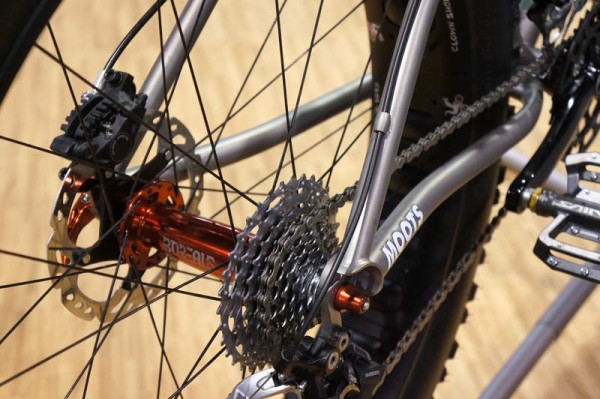 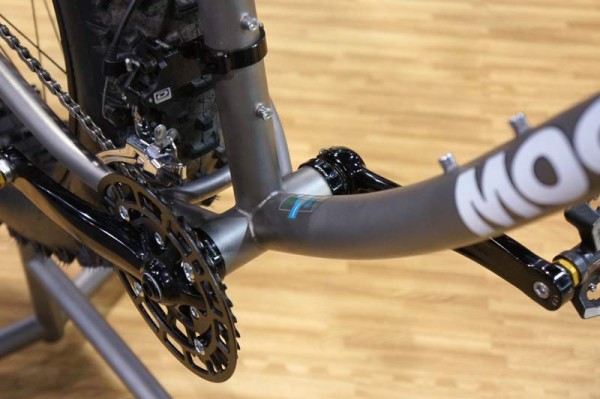 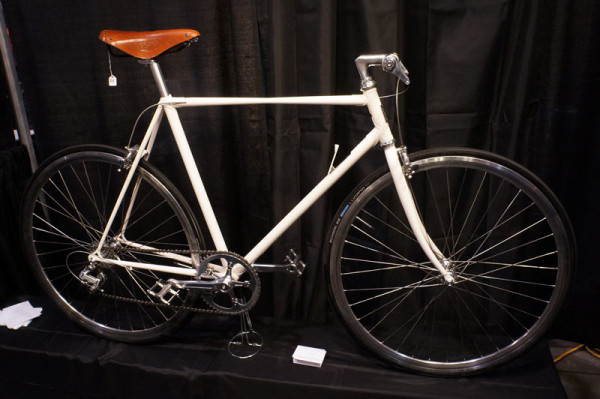 Denmark’s Cykelmagaren had perhaps the most trick features of any bike at NAHBS this year, which is both saying a lot for their creativity and a general observation that most folks brought customer bikes showcasing their typical builds for normal people. 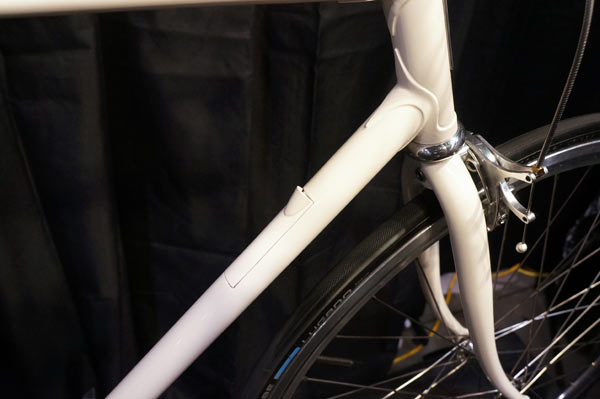 This city bike used a friction shifter built into the down tube for a stealthy look. Above, closed and shifted to one extreme of the cassette… 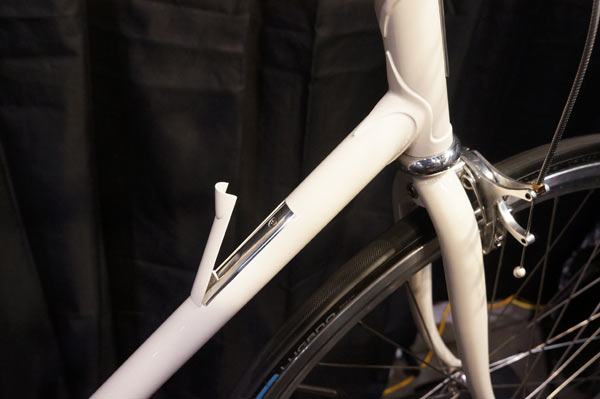 …and opened to shift to the other extreme. Stop anywhere in between, just like with old-school down tube friction shifters, and it’ll find the gears along the way. 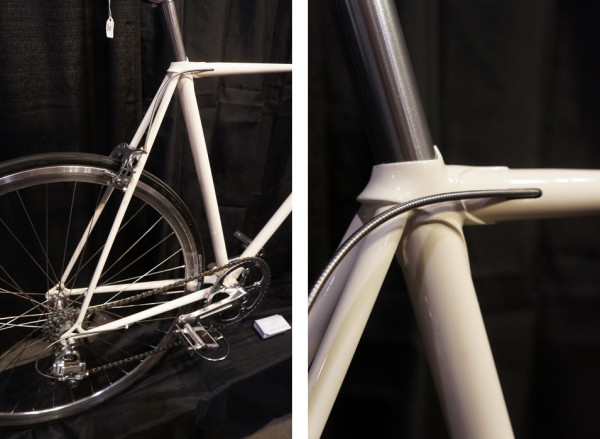 Lugs were also shaped and formed into a very stylish frame. It borrowed the cable brake levers from bikes shown in past years (worth a look). Also note the thinned-in-the-center shaped top tube. 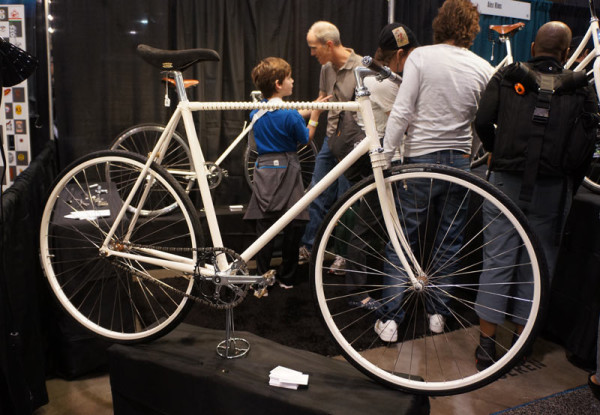 This fixed gear had a tapered top tube, too, but with a consistent diameter ribbing with polished finish.

Maybe not the most comfortable thing to rub your knee against when pedaling, but stunning to behold. 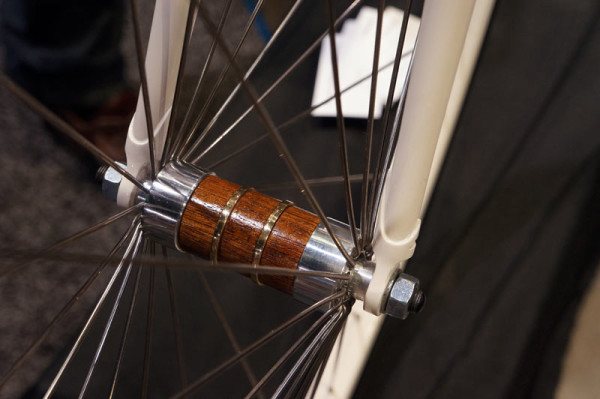 Beyond frames, they make some beautiful wood and wood/metal accessories.

This step thru bike had nifty head and tail badges with integrated LED lights.

Check out a few of their other bikes from years past here and here.

As one of the last few retro grouches still using a Silca frame pump, I want that Ti version on the Moots.

that moots would have looked nicer with a “classic” style fork, verses an unpainted carbon enve with the HUGE white logo. enve makes nice stuff, but that logo design and SIZE…

That Campy Moots is incredible!

Everything very nice. Love the stay/ seat post lug work on the white one, and the campy model is awesome.

Dear god, I had truly hoped the cheese slicer style brake leavers were dead. Why would anyone think that was a good idea?

Paint the fork already – this is a custom bike, right? Or is it an advertising platform for ENVE?

It is a custom bike, velorider, and it was built for Peter Chisolm, the guy that ran Vecchio’s Bicicletteria in Boulder for so long. It surely is a wonder that they didn’t consider your tastes when building a bike specifically for another guy. Weird.

ribbed for her pleasure

That Moots is amazing! Congrats, Peter!!!

By the way, Bicycle Playground is PROUDLY carrying Moots in Huntington, NY.

Yes paint the fork and use a classic script for the word “Enve”.

@velorider, i agree with you.
@psi squared doesn’t get it or what you were trying to say. sorry brah.

a classic style steel fork painted or better yet brushed and clear coated to match the rims on the bike would be the way to go.

if must use a modern fork on a bike designed to look like a throw back, paint the fork and forget about the enve graphic. (enve makes nice stuff but they need to “detune” that logo.

Isn’t weird that Moots didn’t consult K11 about a bike that wasn’t for him? Double weird, especially given K11’s self-determined expertise.