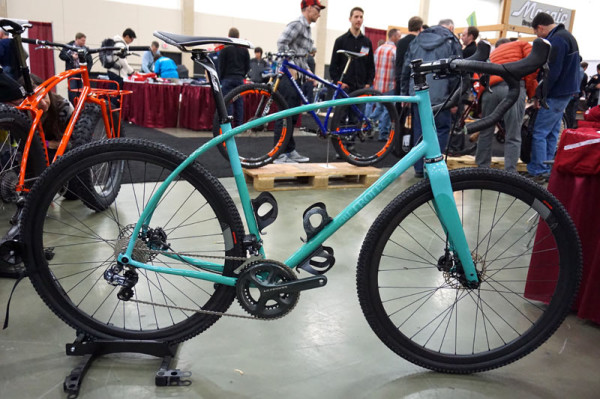 Retrotec had a few new designs on hand that maintain the curvy brand aesthetic but usher in the latest part and standards. The gravel bike above may look familiar, it was used to showcase the new Whisky No.9 carbon disc brake fork at Frostbike.

The orange bike in the background is another new one, a fully modern fat bike that he teased but didn’t show in our pre-NAHBS interview, and just after the show, builder Curtis Inglis sent over pics of another build he just finished that shows off a slightly different take on wide tire clearance…

For normal width tires, like on this gravel bike, the chainstays simply use the split top tube design to spread open in a smooth, seamless manner. 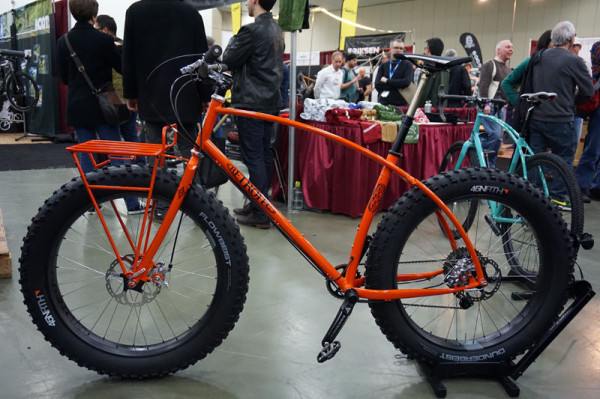 But on something like this fat bike and the 29+ below it, the tubes are interrupted by a bridge that pushes them outboard enough to clear the fatter rubber. This fat bike gets all the latest standards like 150mm front and 190mm rear axles, but it does not use suspension corrected geometry. Inglis said it wasn’t built to use the Bluto, which helps keep the front end lower. 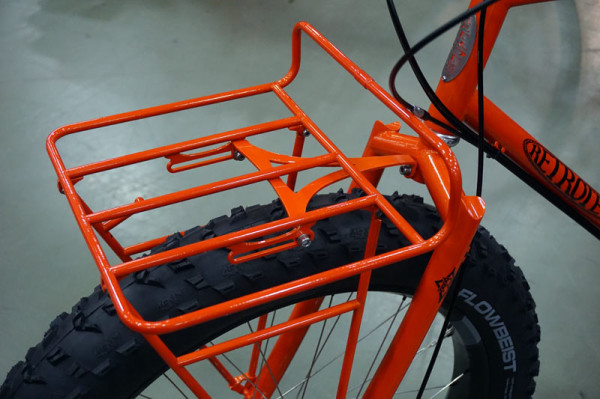 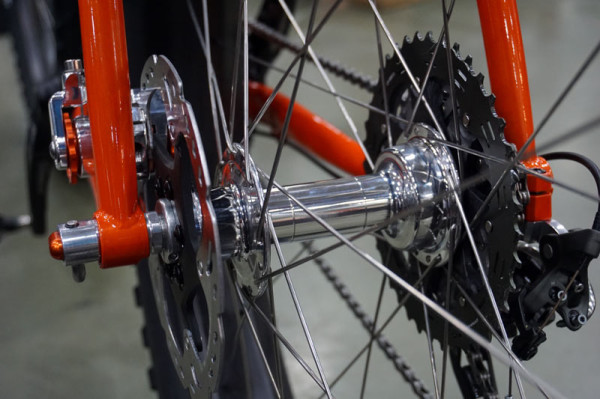 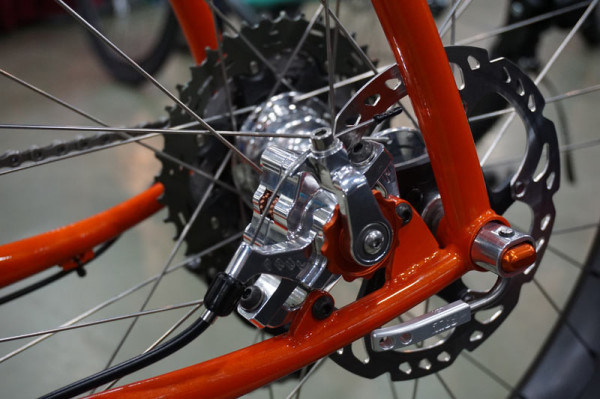 It’s also the first bike to show off the final production version of Paul’s new Klamper mechanical disc brakes, which use a thrust bearing inside rather than standard ball bearings. 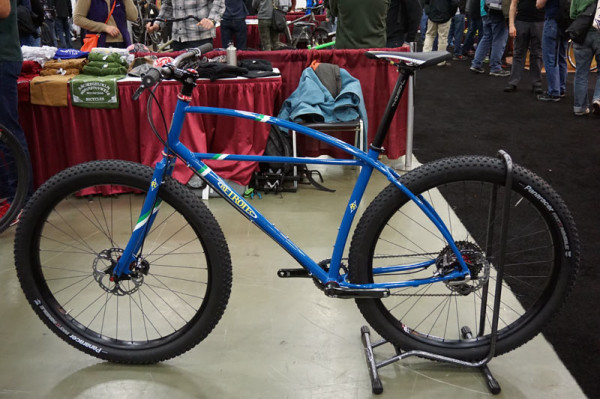 The last bike in his booth was this 29+ hardtail, which also uses an interrupted tube design to make room for the fatter tires. Which makes this next one more interesting: 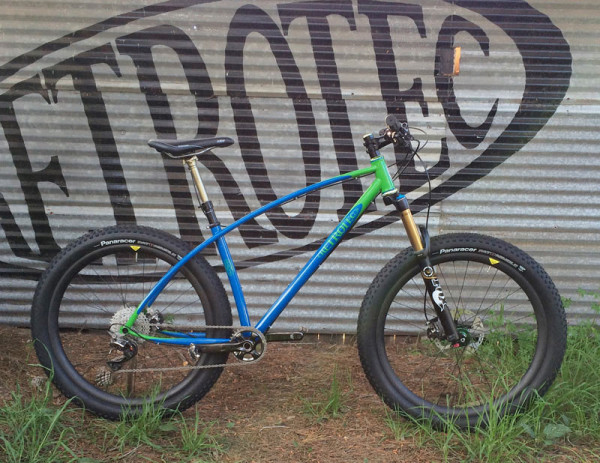 Just after the show, Curtis sent pics of this new 27.5+ running Panaracer’s Fat B’Nimble 27.5 x 3.5 tires, but the split top tubes remain intact all the way back to the dropouts. 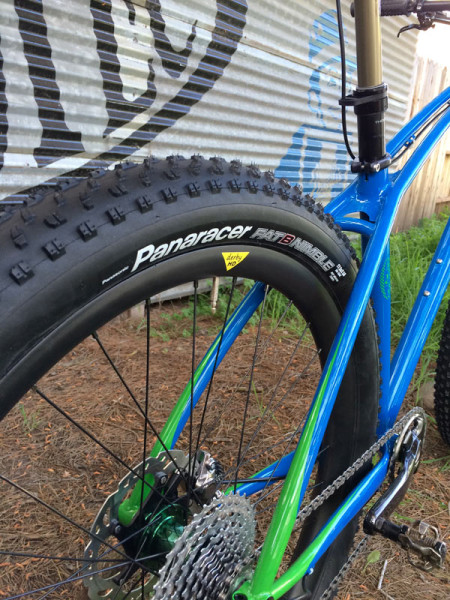 They do get bent right at the seat tube intersection, but it’s still a much sleeker (and probably easier to build) solution. 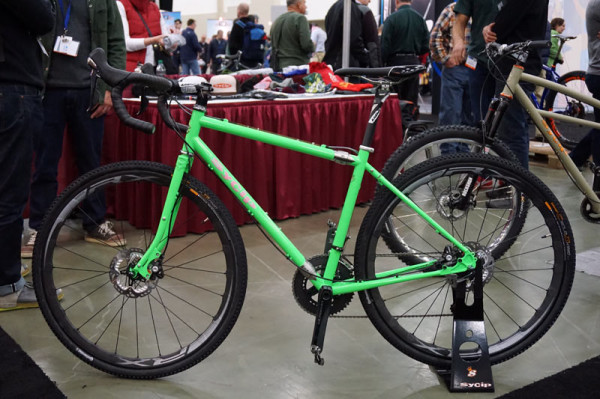 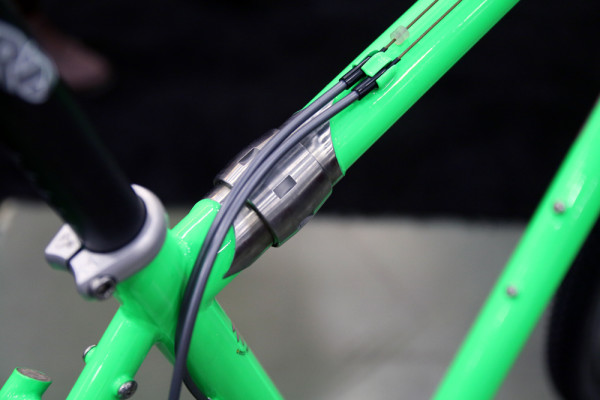 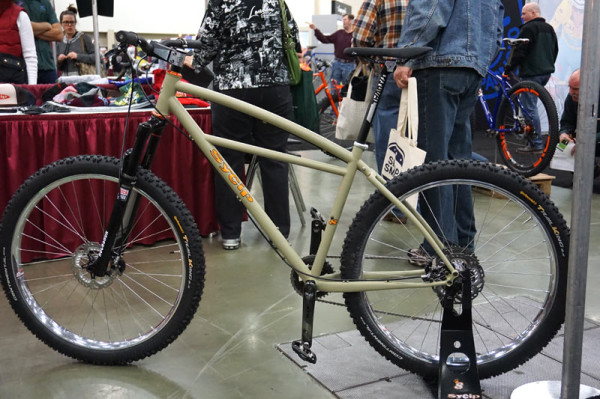 And this long travel trail hardtail. 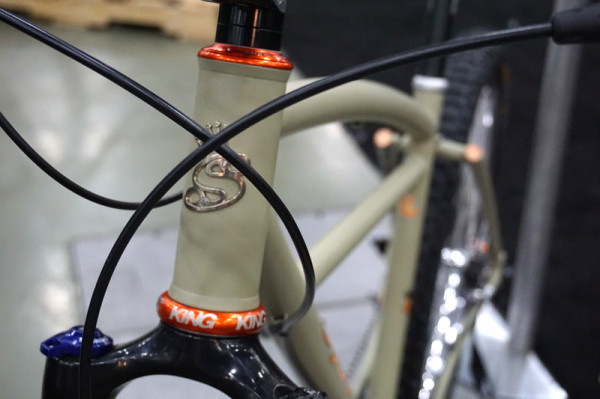 Both are traditional examples of things he builds day in and day out, not quite the unique builds he brought out for last year’s shown in Charlotte… 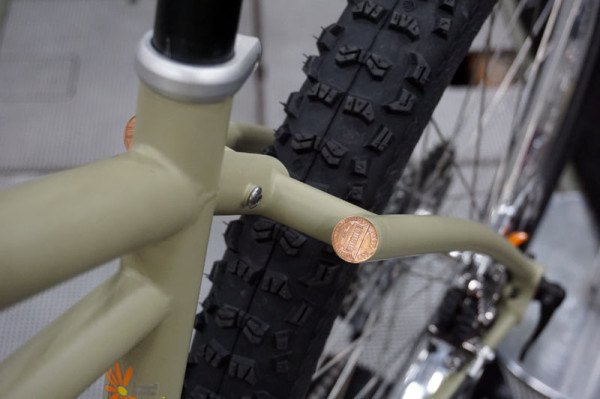 …but he did have a very interesting (and award winning) “experimental” mountain bike adorning Shimano’s booth with an integrated STePS motor assist unit attached. We’ll have that bike shown in our STePS roundup soon!

Please Sycip. Please.
Never ever go away.
Please. The industry needs you.
It needs companies that aren’t glued together and marketed.
It needs frames that will might see China only during amazing tours.

Way back when, when Bontragers ruled the earth. When the phrase “steel is real” wasn’t some hipsters tattoo. It was how bikes were made.
That’s when I saw my first Sycip.
I’ve wanted on ever since.
One day….. Just maybe.

I can’t grok the design aesthetics of these two builders. Too curvy. Their frames look awkward, heavy and ball-busting to me.

OldDoc, I fully second all you’ve said. I’ve been drooling over Sycip for over 15 years.

Those are some of the best folks in the industry.

…since bontragers and drool for 15yrs? they might go away if they gotta wait that long for an order

I’ll have the Retrotec gravel bike and the 27.5+ . Do you need my shipping address?