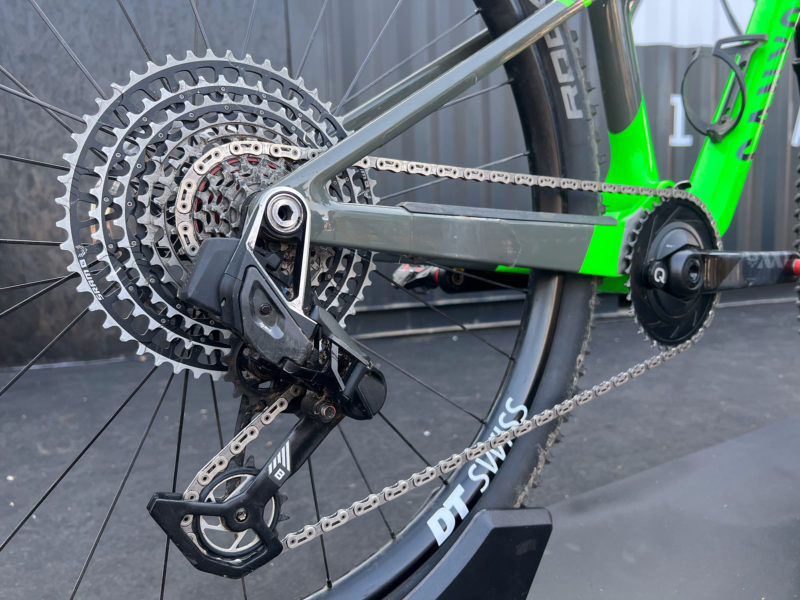 To date, we’ve spotted the upcoming direct mount SRAM Eagle AXS rear derailleur and a new cassette on several pro bikes, but we finally got a closeup look at the new components and snagged plenty of detail photos. These pics reveal new details (and create more questions) about the prototype derailleur, cassette, chain, and even new one-piece Quarq power meter chainrings for mountain bike cranks. 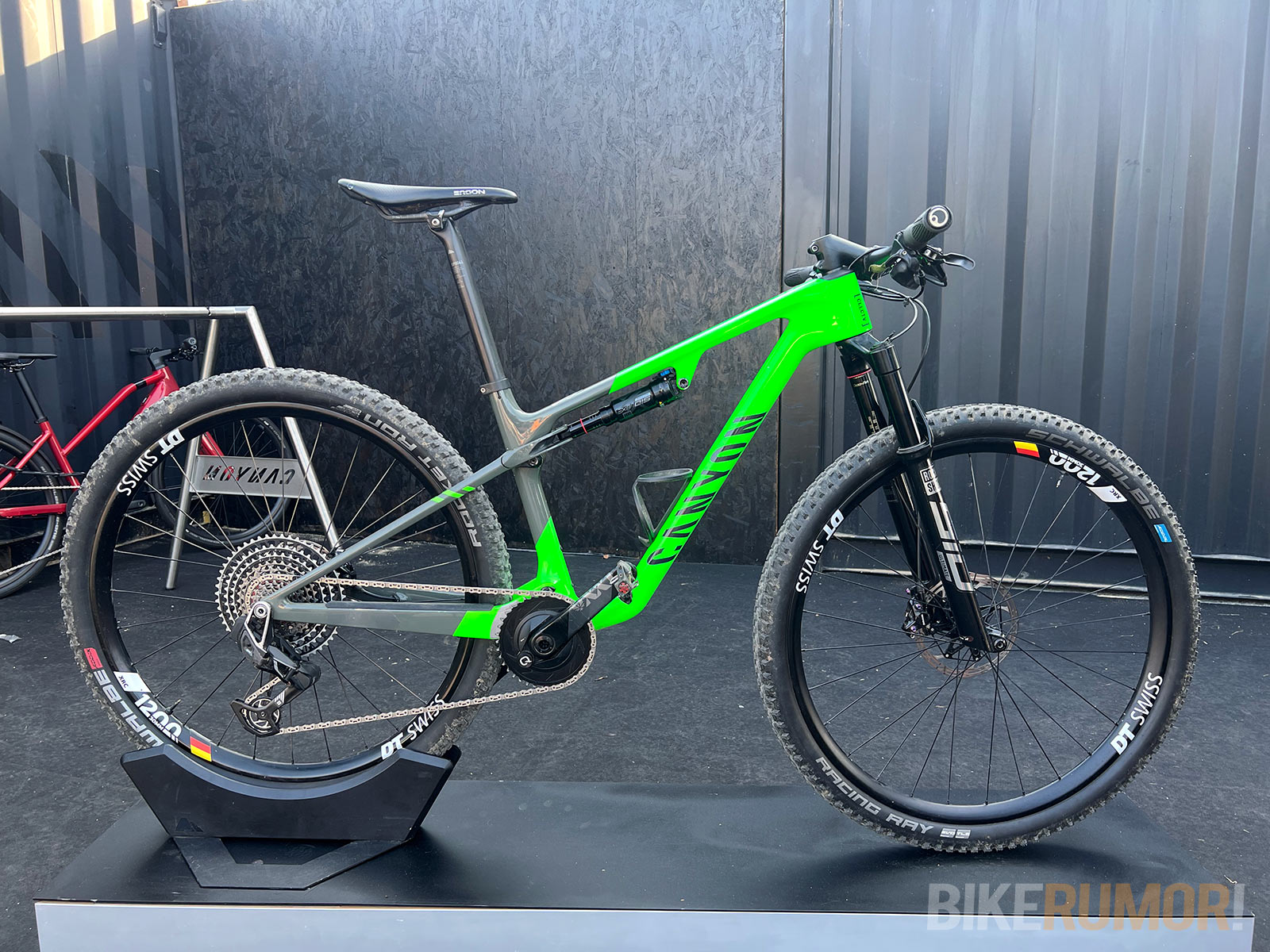 Starting at the front of the bike, the Canyon team riders (and most other athletes we’ve spotted with these new parts) have been riding Blackbox chainring with integrated Quarq power meter. 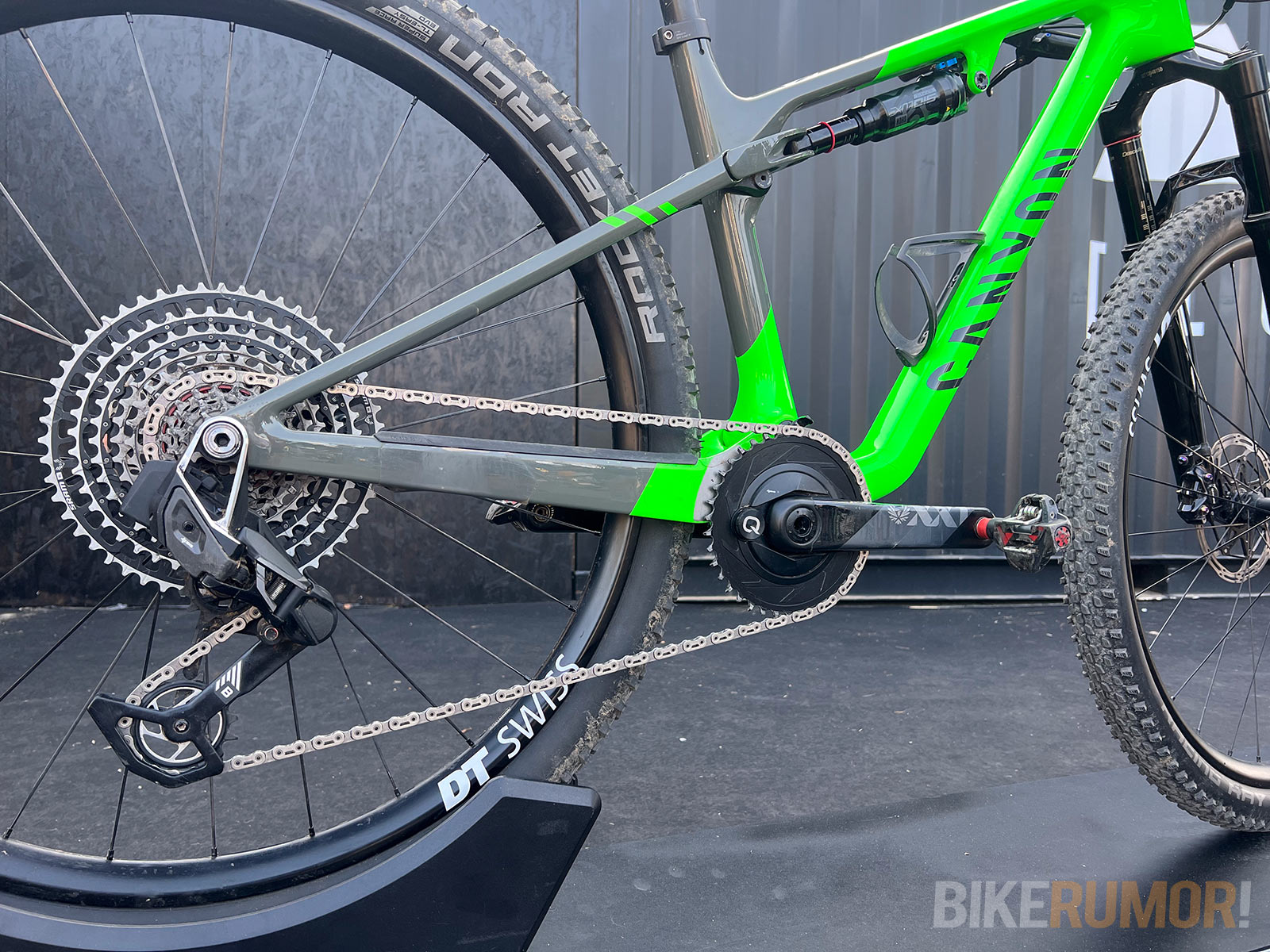 Unlike the current MTB offering that uses a separate Quarq-equipped spider and bolt-on chainring, this one combines them. The result is likely a much stiffer, possibly lighter setup, but with the lack of holes, it’s also much less likely to accumulate muck. I’d guess that it’s also probably a bit more accurate, too. 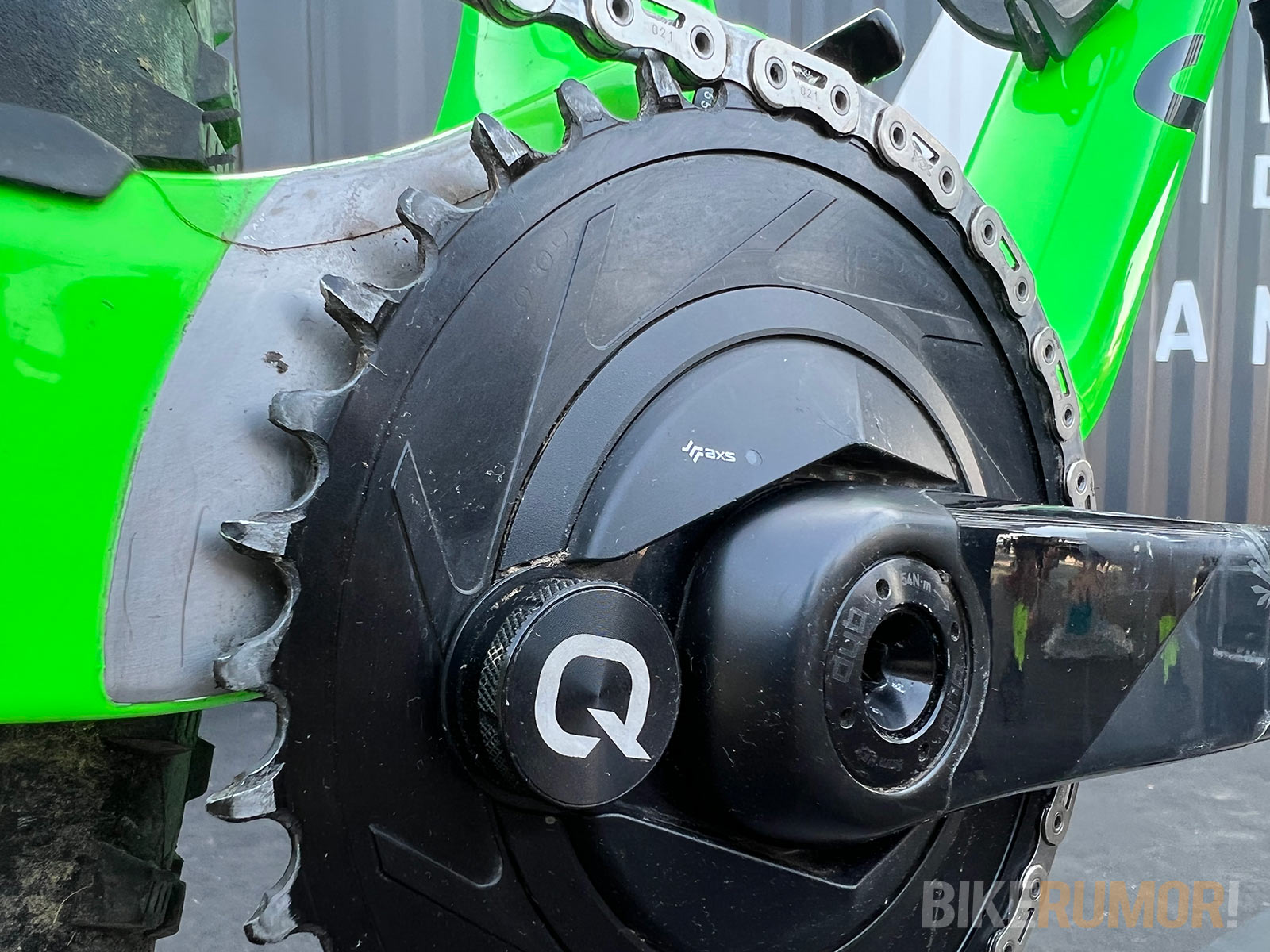 The narrow-wide chainring tooth profiles here are different than the current X-Sync mountain bike teeth, which have square edges and are equal length.

These are rounder, with the wider the teeth protruding further, mimicking the 1x chainrings offered for gravel bikes and are compatible with the FlatTop chains. This could be how SRAM is bringing the FlatTop chain to its mountain bike drivetrains, which means that might have nothing to do with the cassette.

Note that I’m emphasizing could and might…it’s all speculation at this point, and SRAM does not comment on products before they are released. 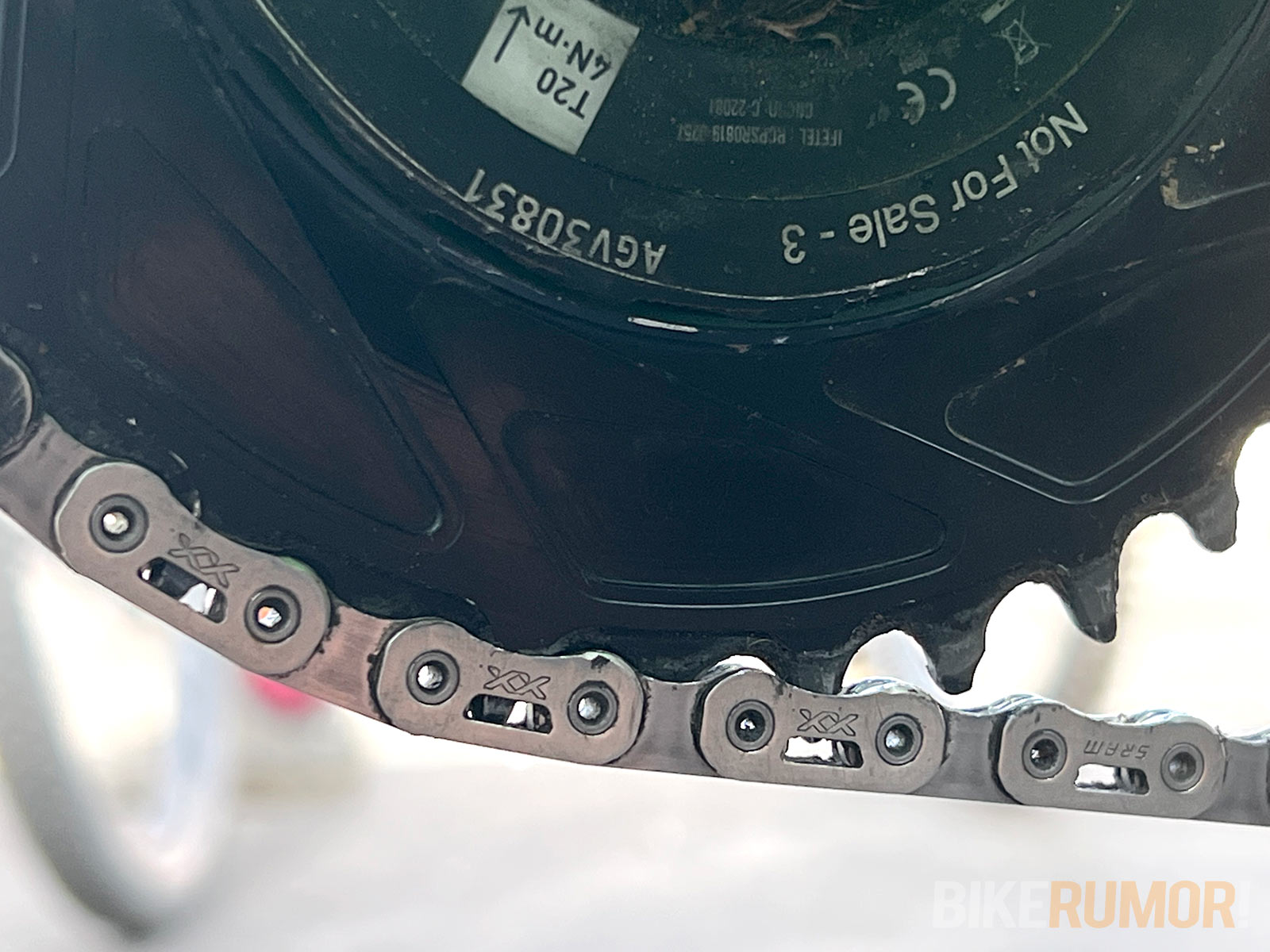 This makes less sense on a 1x system where chainring size swaps are more common. Not visible in this photo, there are graphics on it that indicate a thread-on direction, which means the chainring itself could thread onto the power meter body. Fingers crossed.

Regarding the chain, note that the pins are hollow and there’s a new cutout on the outer plates. They say XX, which suggests it’s purely a mountain bike part, but we’d be really surprised if there’s not a knocked-out road equivalent coming, too. 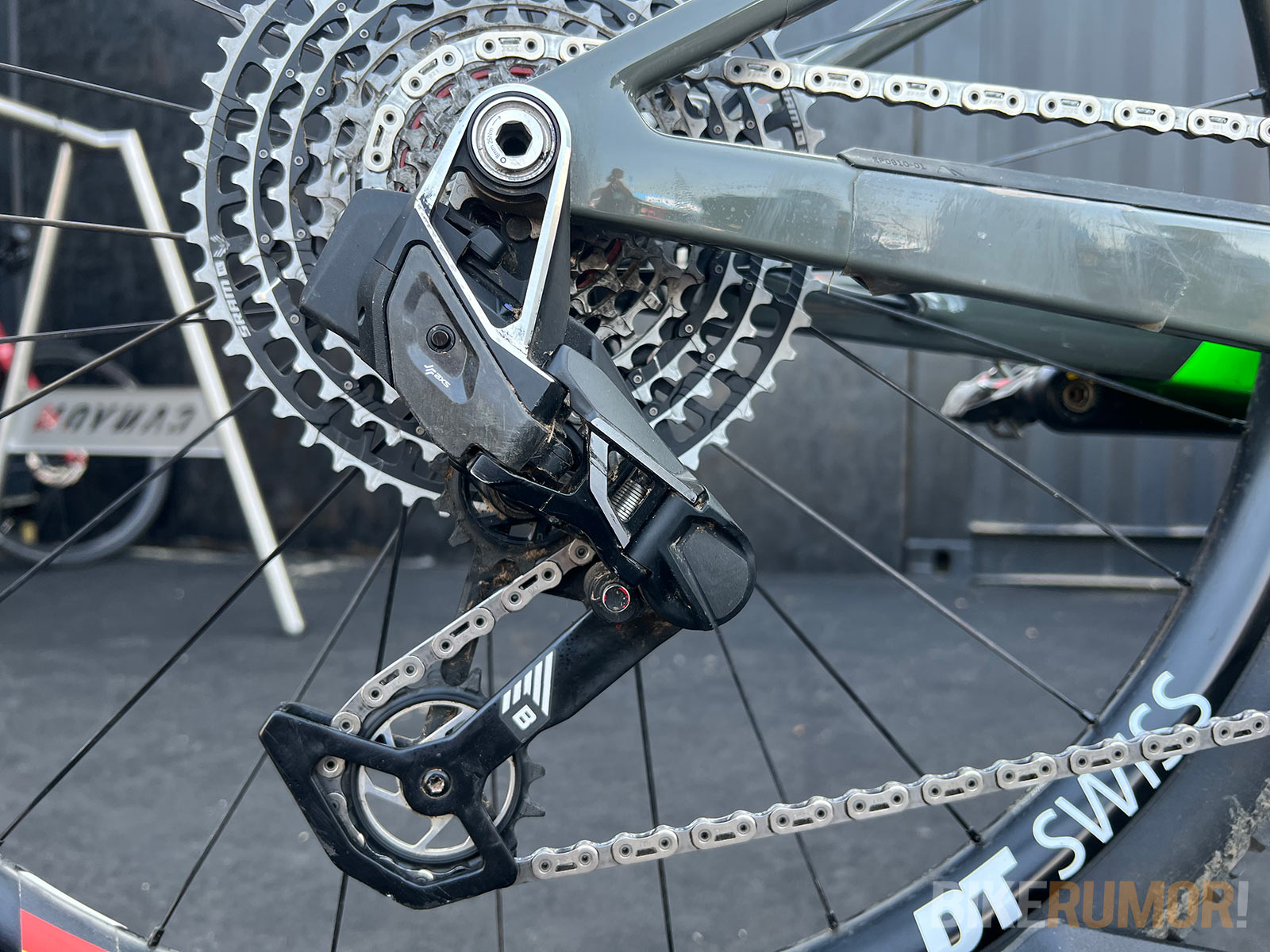 This derailleur mounts directly to the frame, eliminating the hanger. The benefits are, presumably, a stiffer and stronger overall chassis with perfect alignment (assuming your dropout is perfectly to spec). 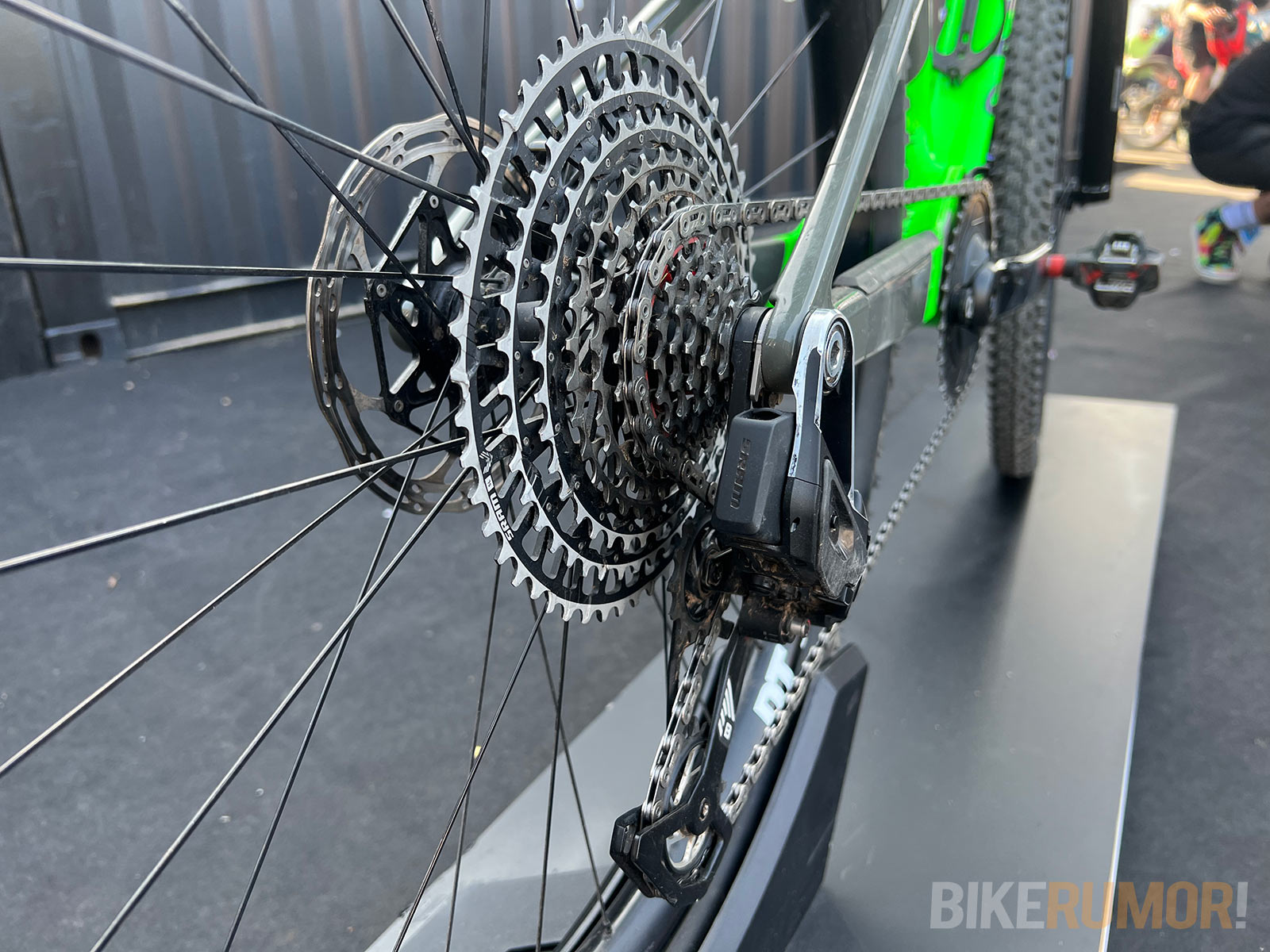 The derailleur’s upper section slides over the dropout, utilizing (at a minimum) the rear thru axle to align and secure it to the bike.

On this bike, there’s an additional bolt on the outside, which likely threads into the derailleur in order to capture it so that removing the axle wouldn’t also allow the derailleur to slide off during a wheel change. 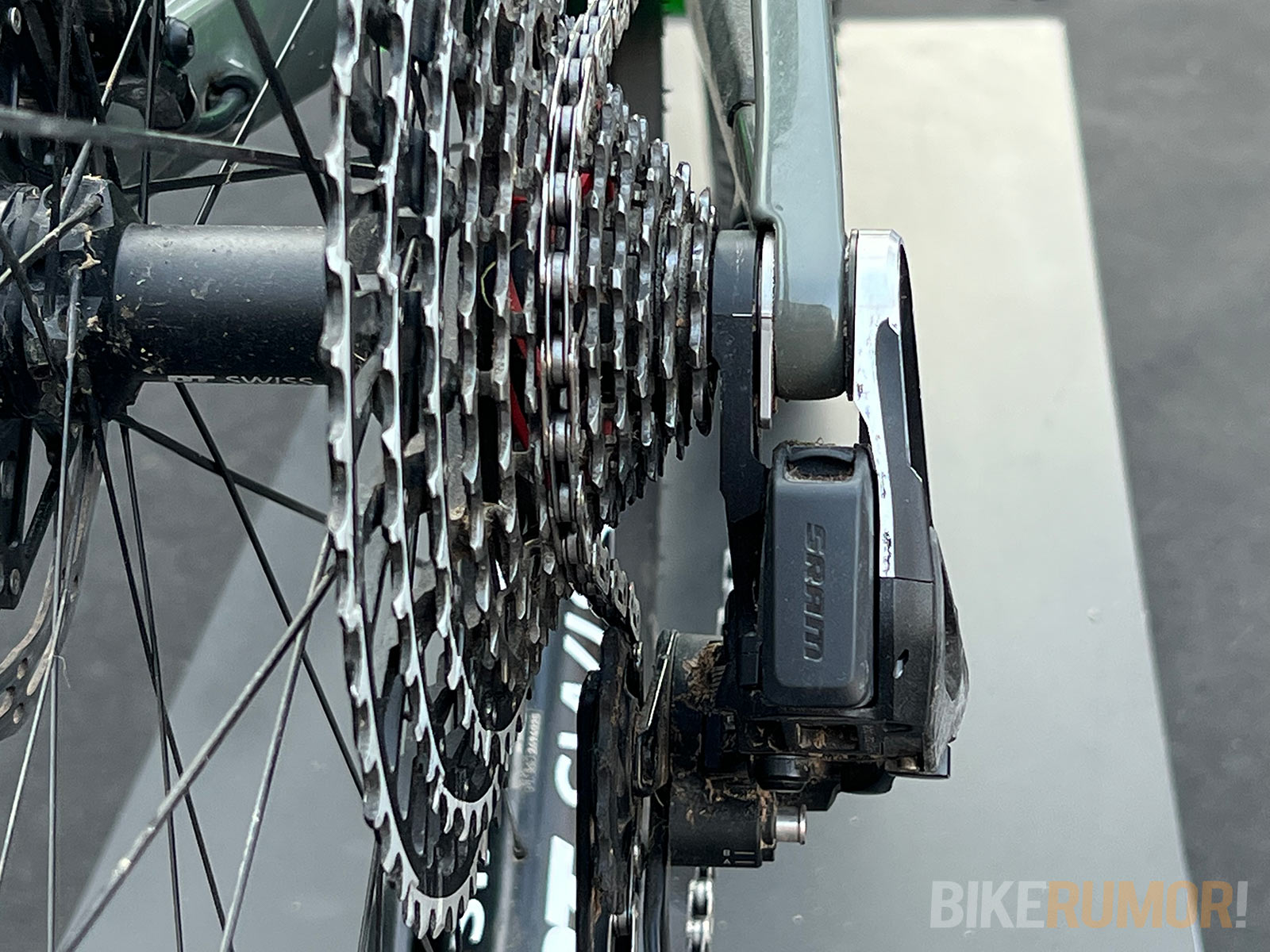 Note the silver “spacer” between the frame and inside derailleur mounting section. Its notch is lined up with a mark on the derailleur, suggesting two things:

Typically, that sort of rotational adjustment would be done with the B-screw, but there’s no B-screw visible, so there may be some other means for positioning this.

Or, it may be positioned solely by the clamping force of installation, and the spacer acts as a washer, which would allow the derailleur to pivot backward with a hard impact, then simply be rotated back into position. 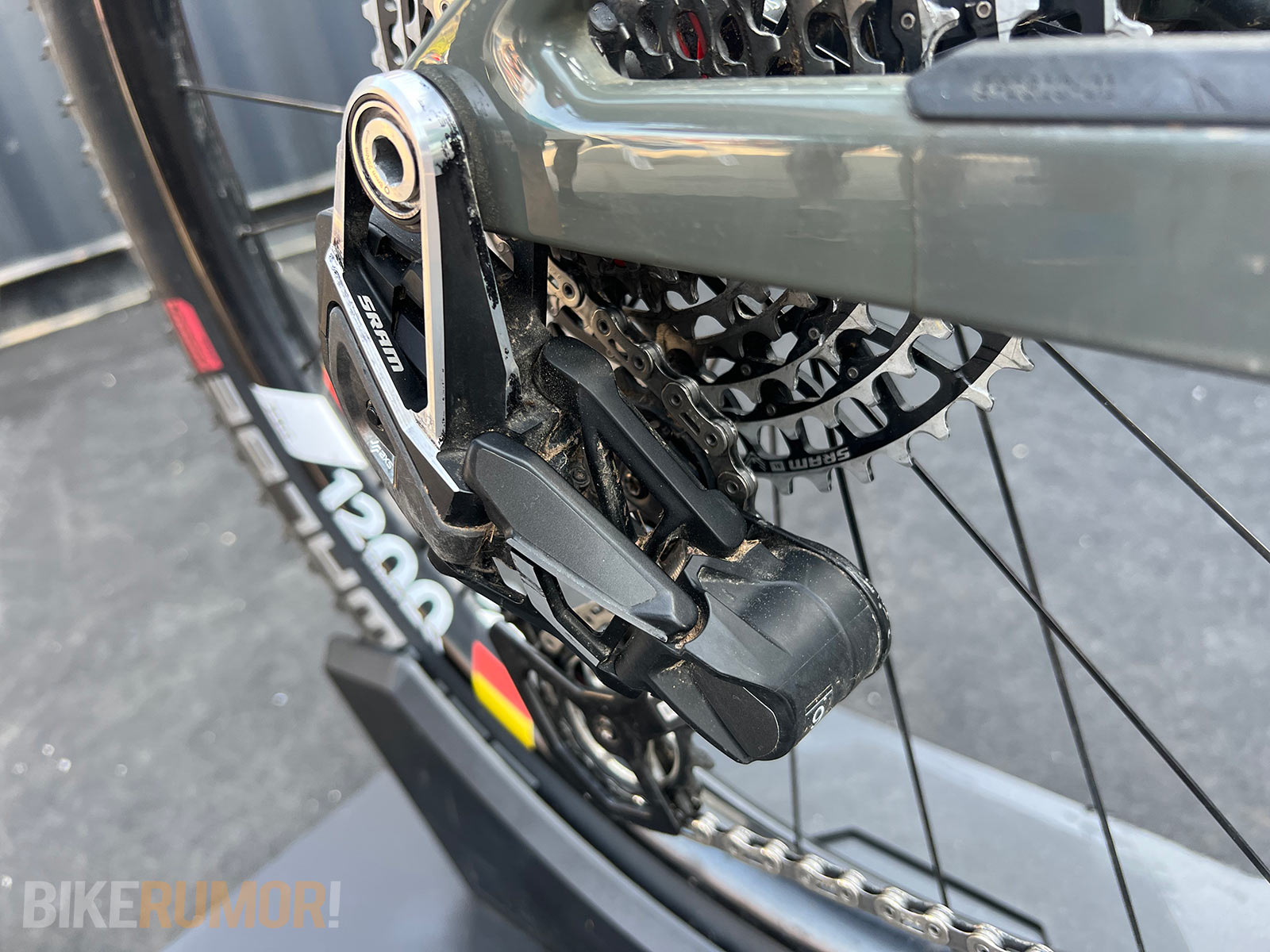 Despite the scratches, that black tape on the upper parallelogram surface and the clutch cover looks quite fresh… definitely some branding they’re trying to hide.

The big concern about a direct mount derailleur is its durability and the cost of replacing it versus a cheap hanger. Here’s why I’m not concerned:

As much as SRAM likes to push new products out quickly, it seems highly unlikely that they’d release a very expensive part that’s easily damaged. 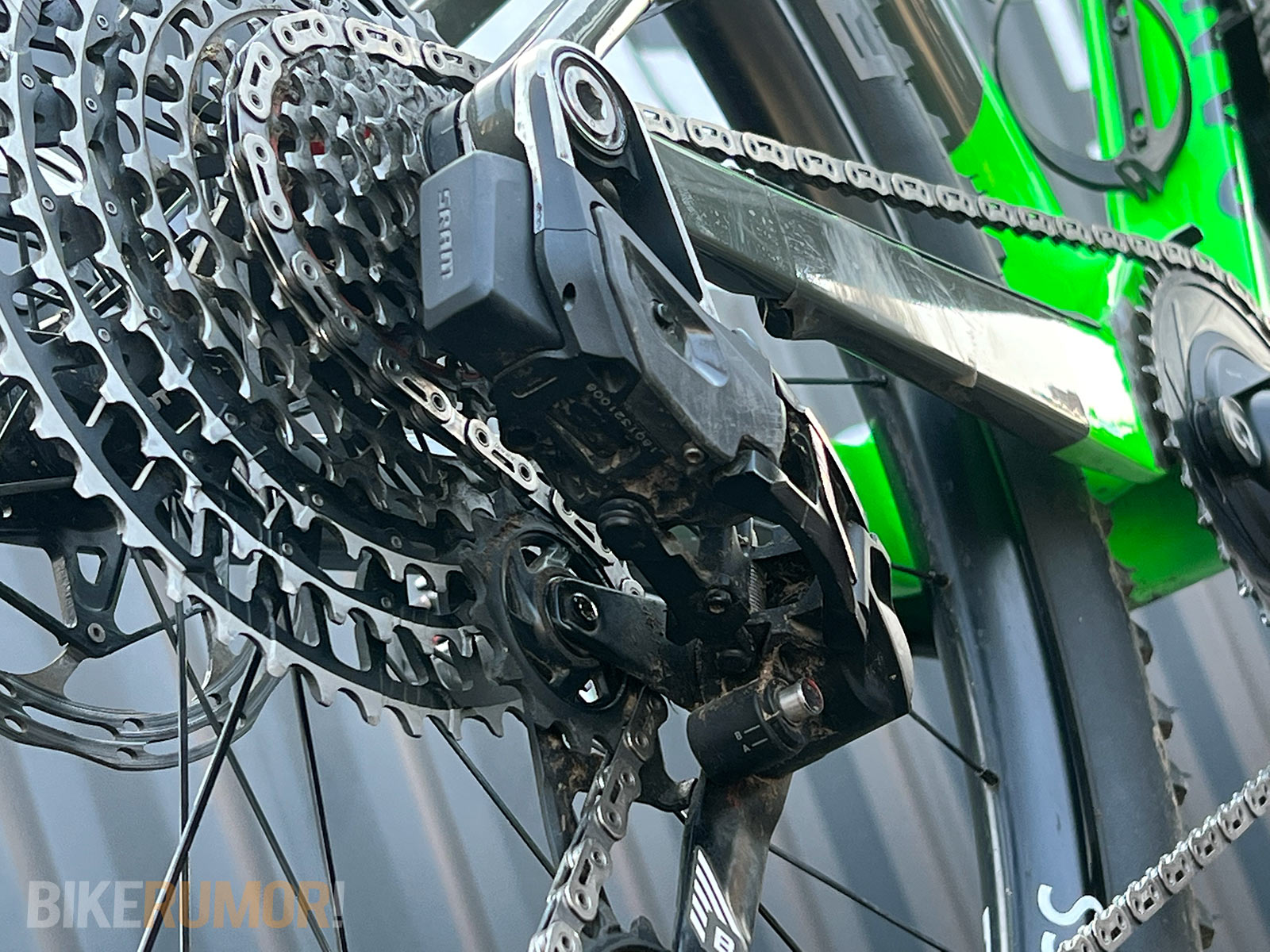 Here’s one of the more mysterious features…notice anything different about the Cage Lock? 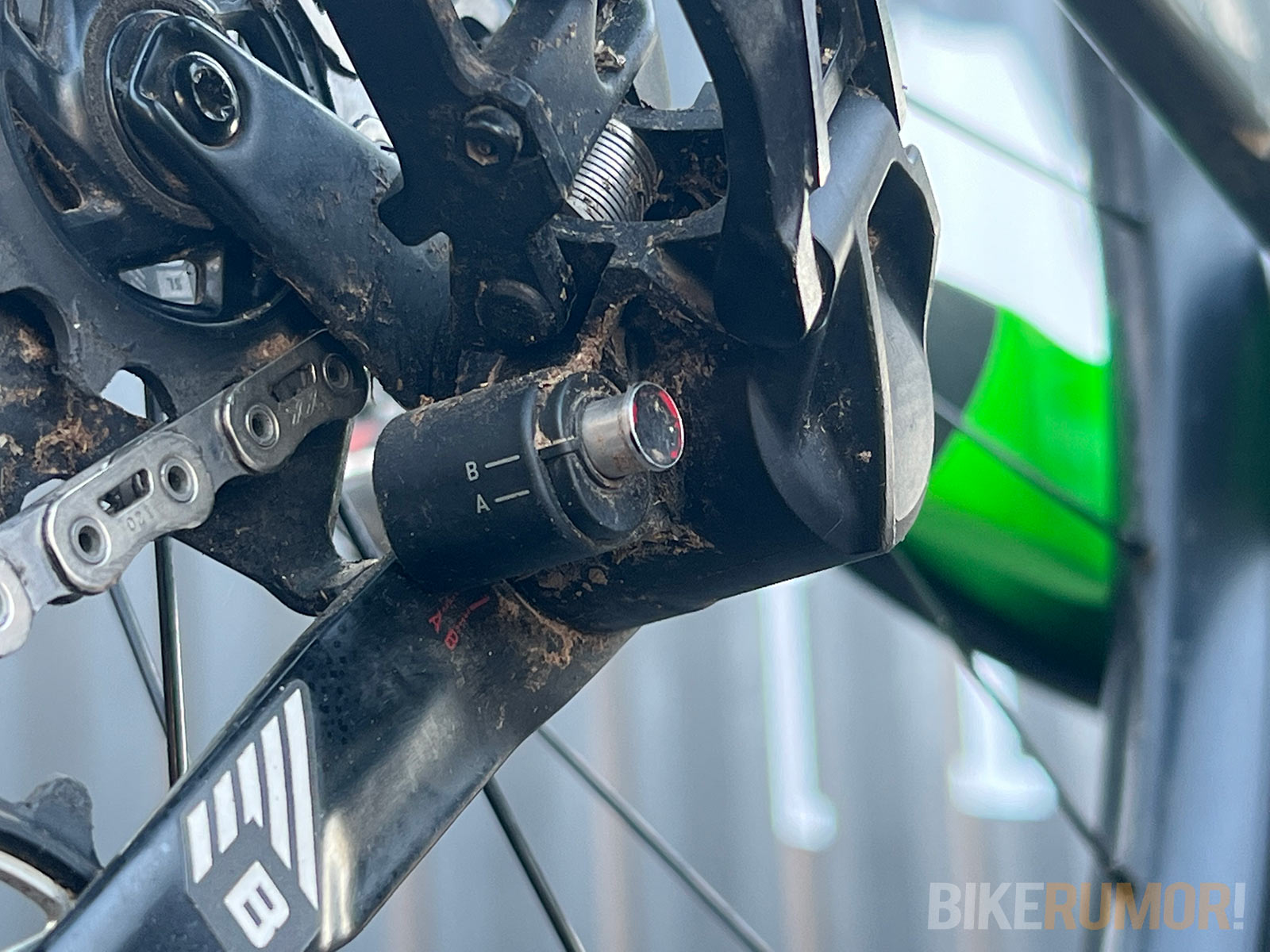 A two-position Cage Lock has what looks like a flip chip-style pin holder. A/B markings on the outer pulley cage plate show… I’m not sure. They could be alignment markings for derailleur setup, or to indicate which position the pin needs to be in.

My guess is that different frame designs may benefit from different pin positions to make wheel changes easier. As trivial as this seems, its the one that’s intriguing me the most. 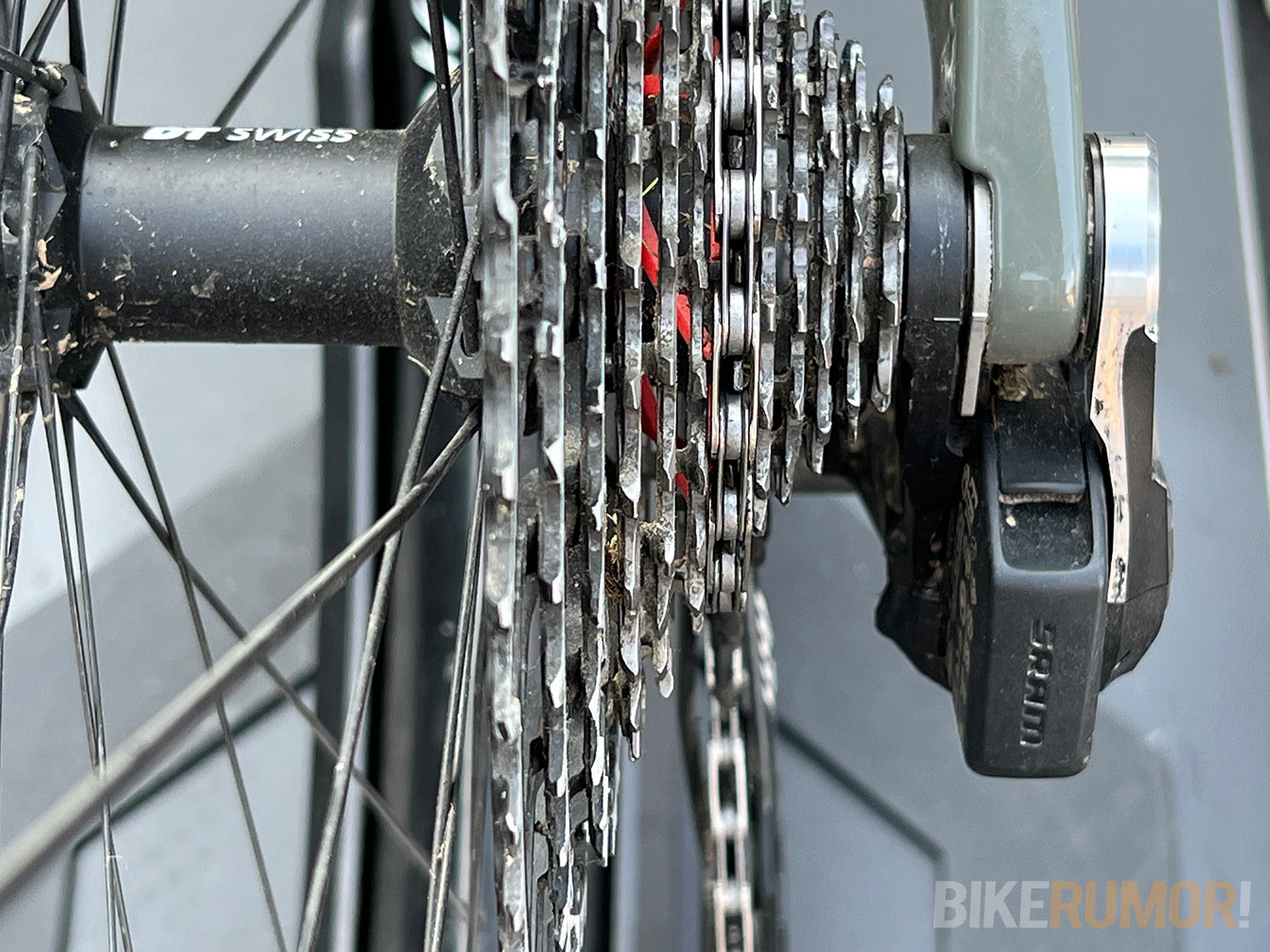 Or, possibly it will angle adjust (yaw?) to improve chainline with the chainring, but with their horizontal parallelogram movement on the derailleur, this seems less likely. 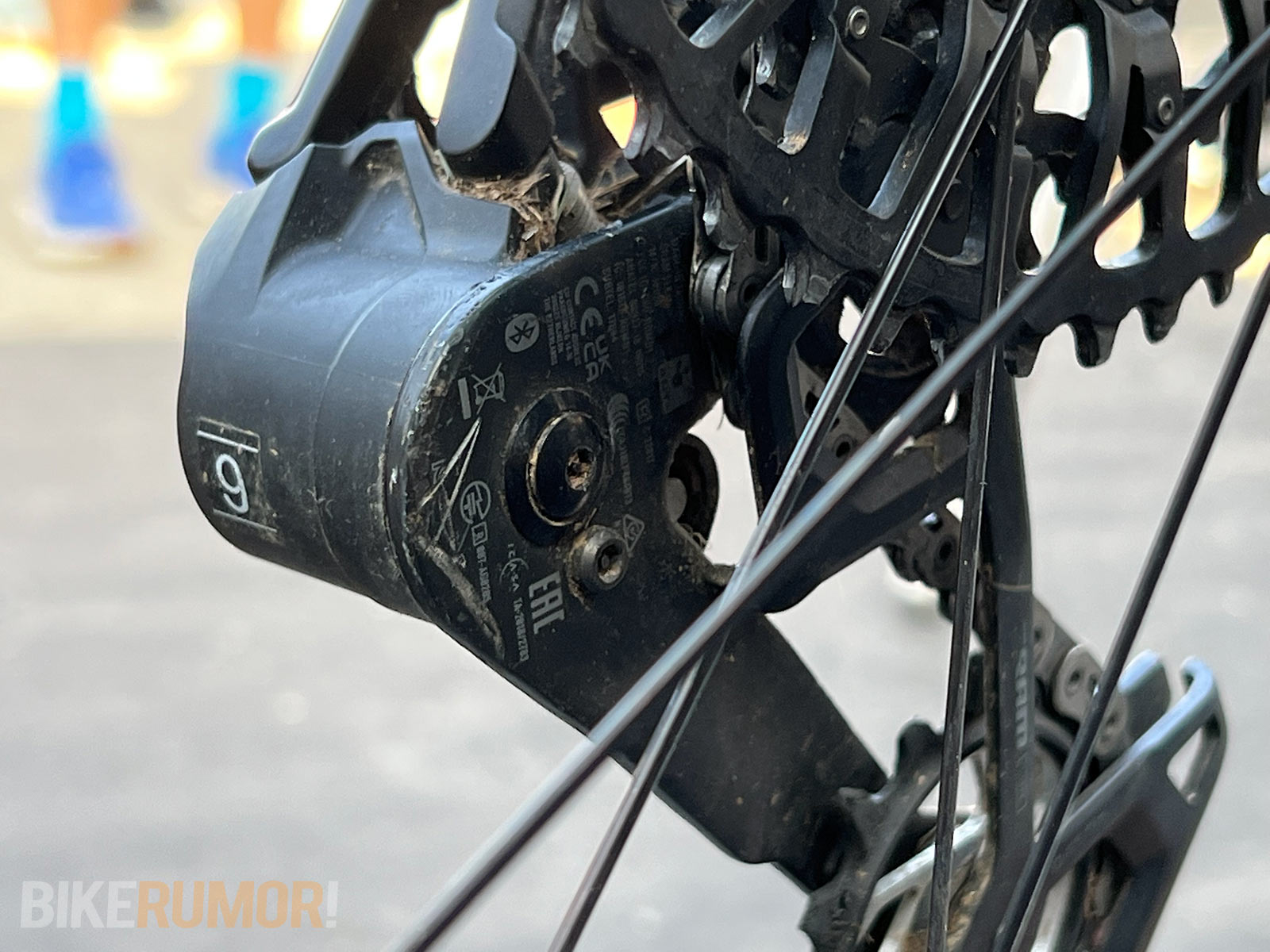 Bluetooth and ANT+ means it’ll likely share gear selection data with compatible head units. The #9 sticker matches a similar sticker on the cassette, likely just assigned per athlete so they can check wear and tear together after the season. 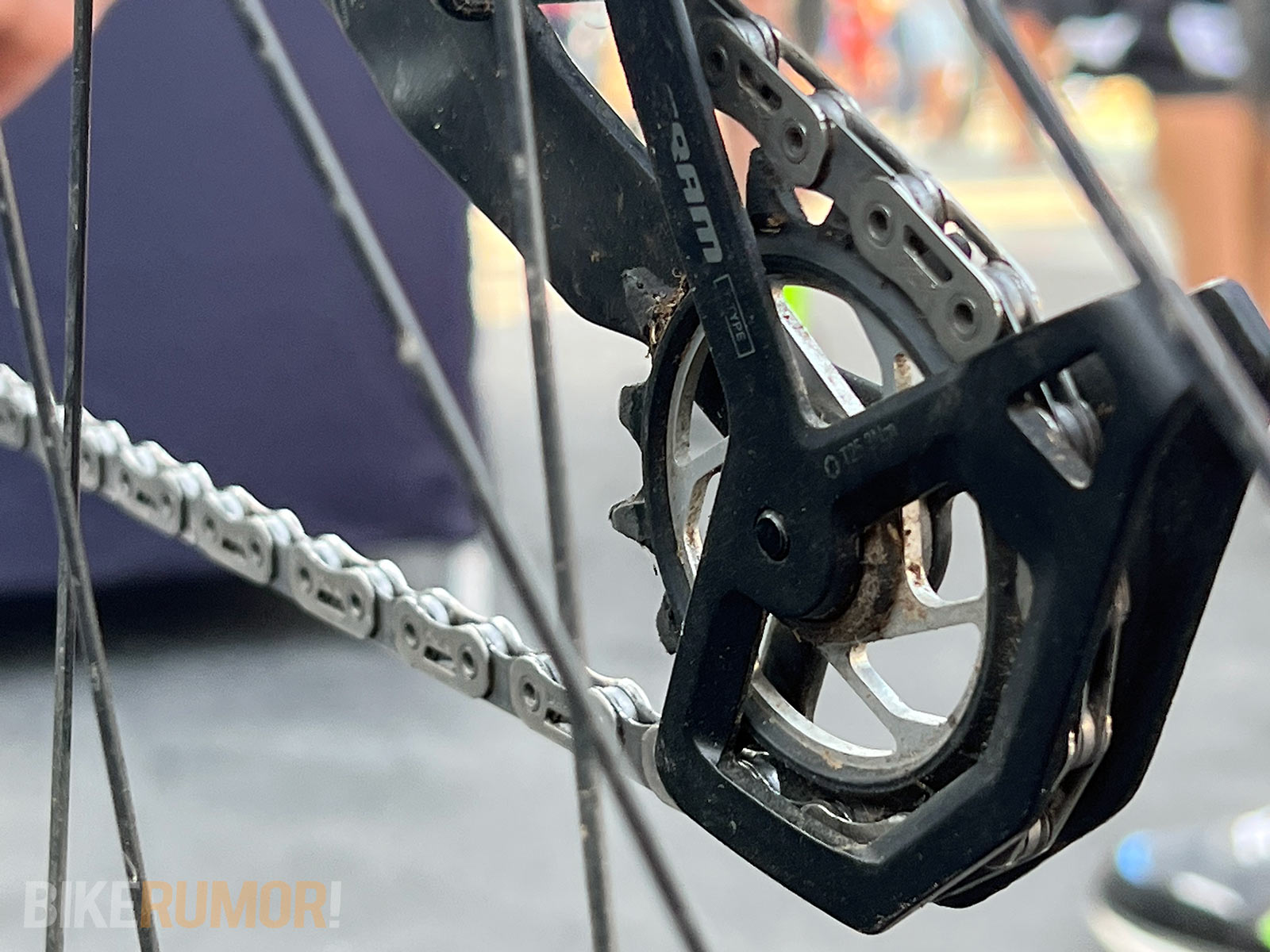 I’m sure there’ll be aftermarket oversize pulley cages out for this soon enough, but SRAM’s giving you less reason to want them. This model has larger 12/14 (upper/lower) pulley tooth counts, compared to the 10/12 of the current Eagle AXS derailleurs.

The lower pulley also looks to have a metal body with lower-friction composite teeth. I’d put money on ceramic bearings for XX1, too. 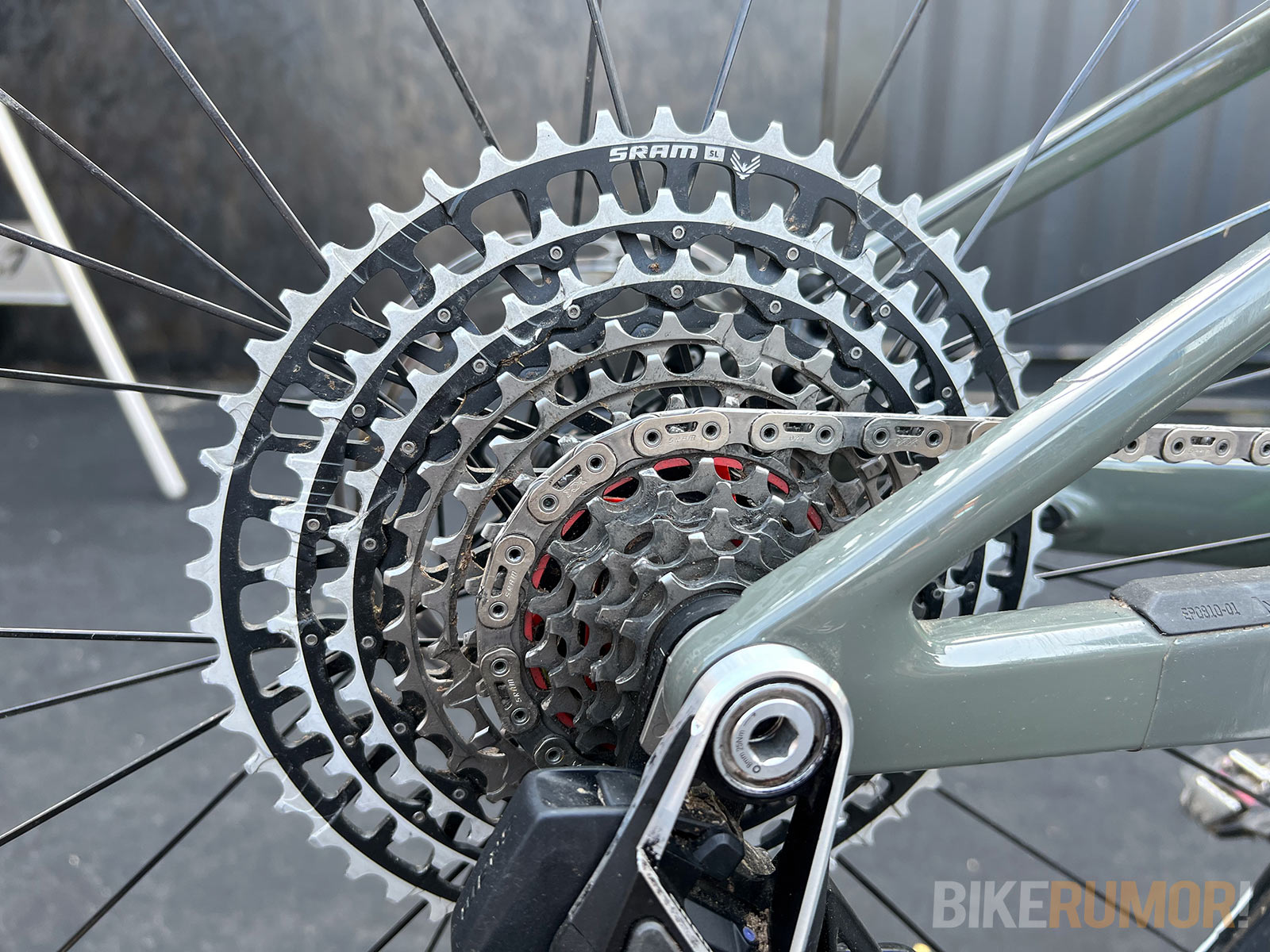 The new cassette looks like it’s going to be the Eagle SL cassette. Cory analyzed the tooth counts and found that the three largest cogs are different than the current 10-52 model. 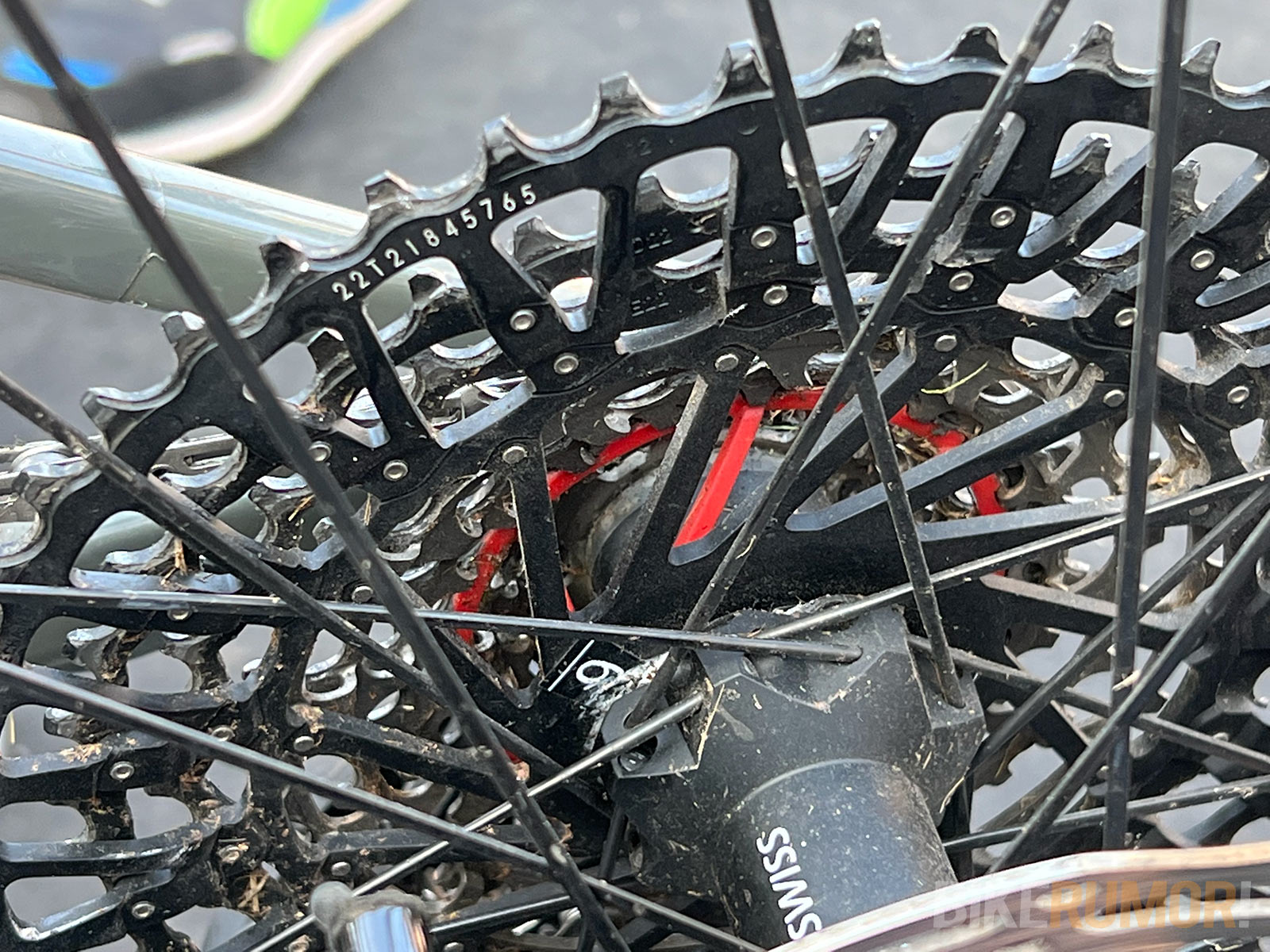 The construction blends the machined steel X-Dome of the current XX1/XO1 cassettes (cogs 1-9) with the pinned construction of the GX cassette for the largest three cogs…except it does it differently.

Where GX cassettes pin each cog to the one behind it, this Eagle SL cassette pins the lower steel cluster and cogs #10 & #11 directly to the backplate, which is also the 52-tooth cog #12.

This lets the #10 and #11 cogs remain shallow since they’re not supporting their neighbor’s torque, and, because the top three are now alloy (instead of just the 52-tooth cog), they’re saving weight by using less steel…hence (presumably) the “SL” moniker. 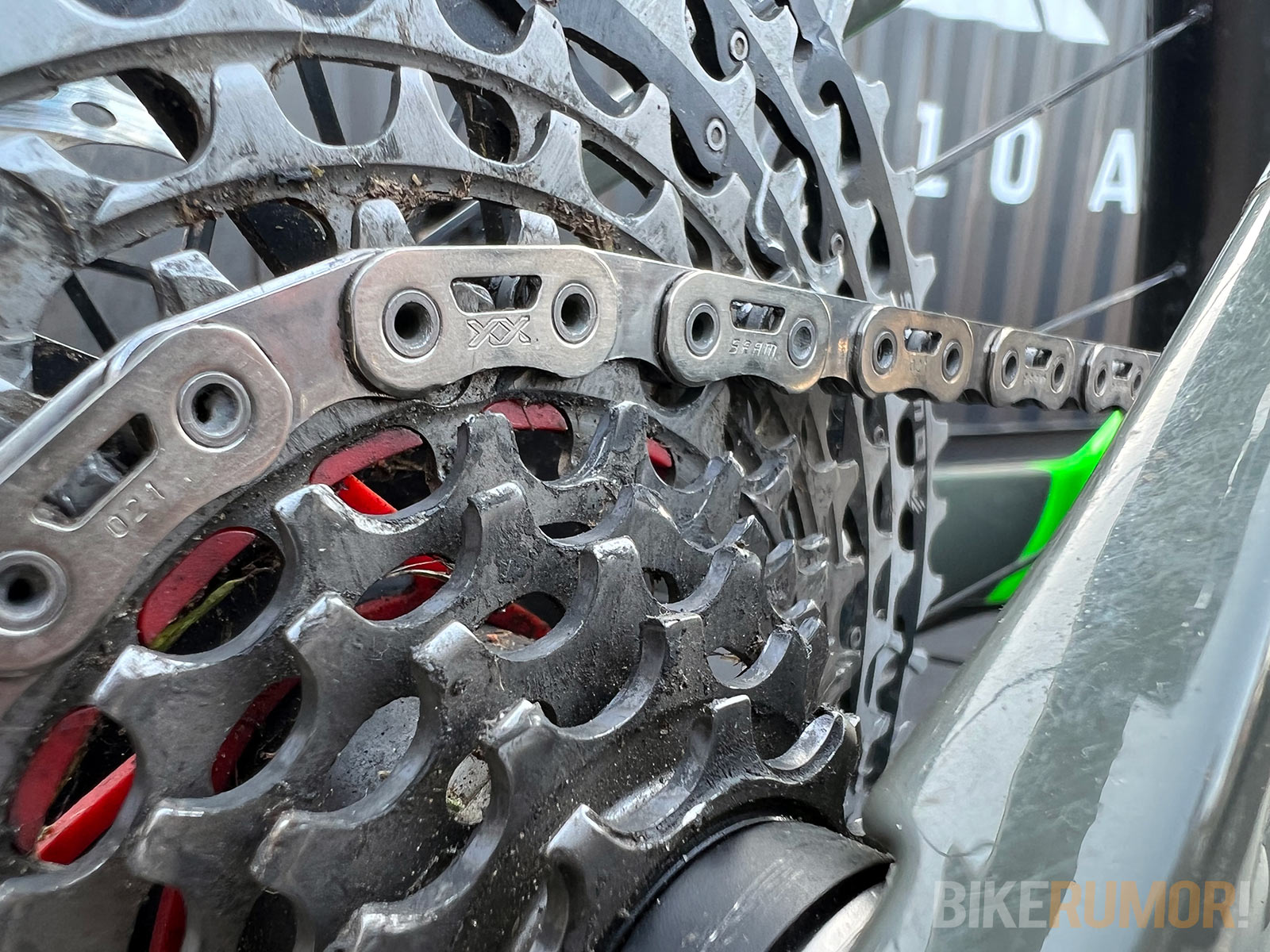 The outer face of each cog is smooth, but the backsides have additional shaping and supports for the chain. Oh, and that red thing… 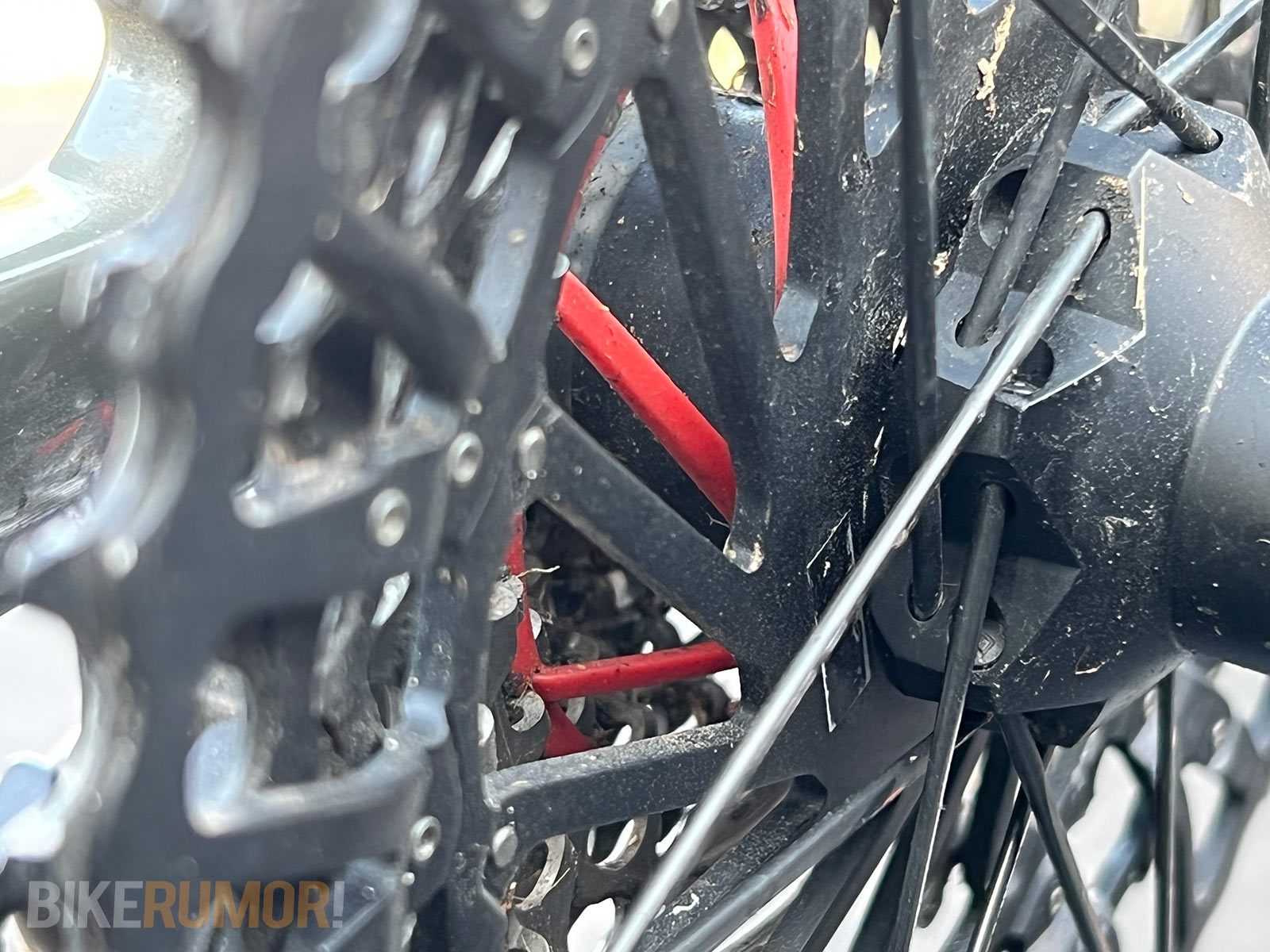 When SRAM debuted their X-Dome one-piece machined road cassettes, they added rubber rings between the cogs to help reduce noise. There’s no denying that SRAM’s machined, hollow cassettes can be loud under hard shifts (under hard efforts), so my hunch is this red elastomer bit is here to damp vibrations and noise.

When is this available?

SRAM has not announced a date. And while we’d hoped we’d have been riding this at the BMC Fourstroke launch, we weren’t…and even their athlete’s bikes had original Eagle parts re-installed before we showed up.

I spoke with several of my industry sources and the general consensus is these parts will be formally announced in spring 2023. If SRAM follows their recent launch strategy, that means immediate parts availability. Given the polished look of these parts, with all required electrical/wireless/transmission graphics, and the fact that they’re allowing team partners to display the bikes in public, I’d say early spring 2023 is a good guess.

Any sign of what happens if you don’t have a SRAM universal mount? Will there be a version for the other ‘standards’. It looks really neat, but not worth changing out a perfectly lovely frame for.

Easy. You don’t use this derailleur. SRAM’s not stupid enough to abandon traditional derailleur mounts for most of their product range. This will be a high end, likely AXS only design.

I can’t imagine them investing so much in this given that not many bikes use the SRAM universal mount. Unless they are absolutely convinced that the use of their design will become widespread (and then I can’t imagine Shimano adopting it), are you predicting that the current AXS designs will run in parallel to this and it will be a halo/different product rather than an alternative?

UDH adoption is happening surprisingly fast, because it actually makes sense, and is easy to design and build around. Pretty much every new halo bike announced is UDH. And this will spread to the rest of the Eagle AXS derailleurs fairly quickly. So, yeah, halo product in that AXS is a premium offering, even at the GX level.

But, like I said, there’s no way they’re stupid enough to cut themselves off from the huge portion of the market that can’t use UDH (every bike ever until two years ago), and the companies that just *won’t* work around another new standard. So yeah, multiple product lines.

Sram seems to be pretty good these days about keeping stuff going, you can get GX in 10sp, 1×11, 2×11, and 12 sp either wireless or cabled, I think thats a pretty good indication that they’re going to keep producing stuff for non UDH bikes

Sram is doing to Shimano what Shimano did to Campagnolo.

Hexsense
Reply to  Will Ferrule

Pretty sure he means out-innovating.

spot on. Also there is nothing new in the chainring tooth shaping. The chainring teeth on the pictured black box quarq are xsync 2 just like current Eagle 12s teeth

means older stuff will be cheaper so im fine with that. also we’ll see how much better it is in practice. this might end up being for XC bikes only for example. we’ll see. Happy to see progress nontheless.

I’m pretty curious about the b screw. My AXS mtb derailleurs have a habit of the b screw backing out and blue loctite hasn’t fixed it. The new cassette gearing looks nice as well. I’m not super sensitive to cadence, but the ten tooth jump to the 52 is a little much. Looks like some cool advancements.

I’m not sure everyone have notice it didn’t comes with big & small freewheel adjusting bolt.

Yeah. The electronic actuation and adjustment makes them unnecessary.

1, in chainring section you mentioned less bolt holes then less chance to catch mud….yet the new chain plate are now full of holes….

2, while cassette cog gap/jump now smaller/more even, percentage-wise they are not.

What about brake disc? It can be seen on summer photos of a pro bikes – sandwich type rotor with alu core 🙂

Knowing Sram availability we can consider this to be a 2053 model year product.

Not sold on the powermeter chainring idea. I still like to have the ability to match gearing to courses/events. Also while they have decent longevity they still require replacing soon than crankarma/spiders.