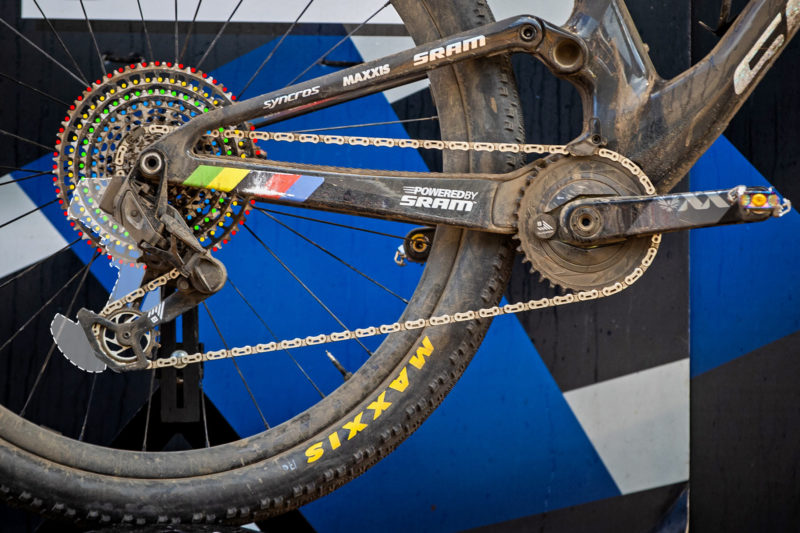 Let’s just take one more moment to get up close with Nino Schurter’s next-gen BlackBox SRAM XX1 Eagle AXS prototype drivetrain. An all-new hanger-less direct mount derailleur, a machined Eagle cassette with new gearing combinations, and a new hollowed-out FlatTop mountain bike chain lighter than anything yet. And since Nino keeps winning, his bike keeps popping up on the World Cup podium for us to get a better sneak peek… 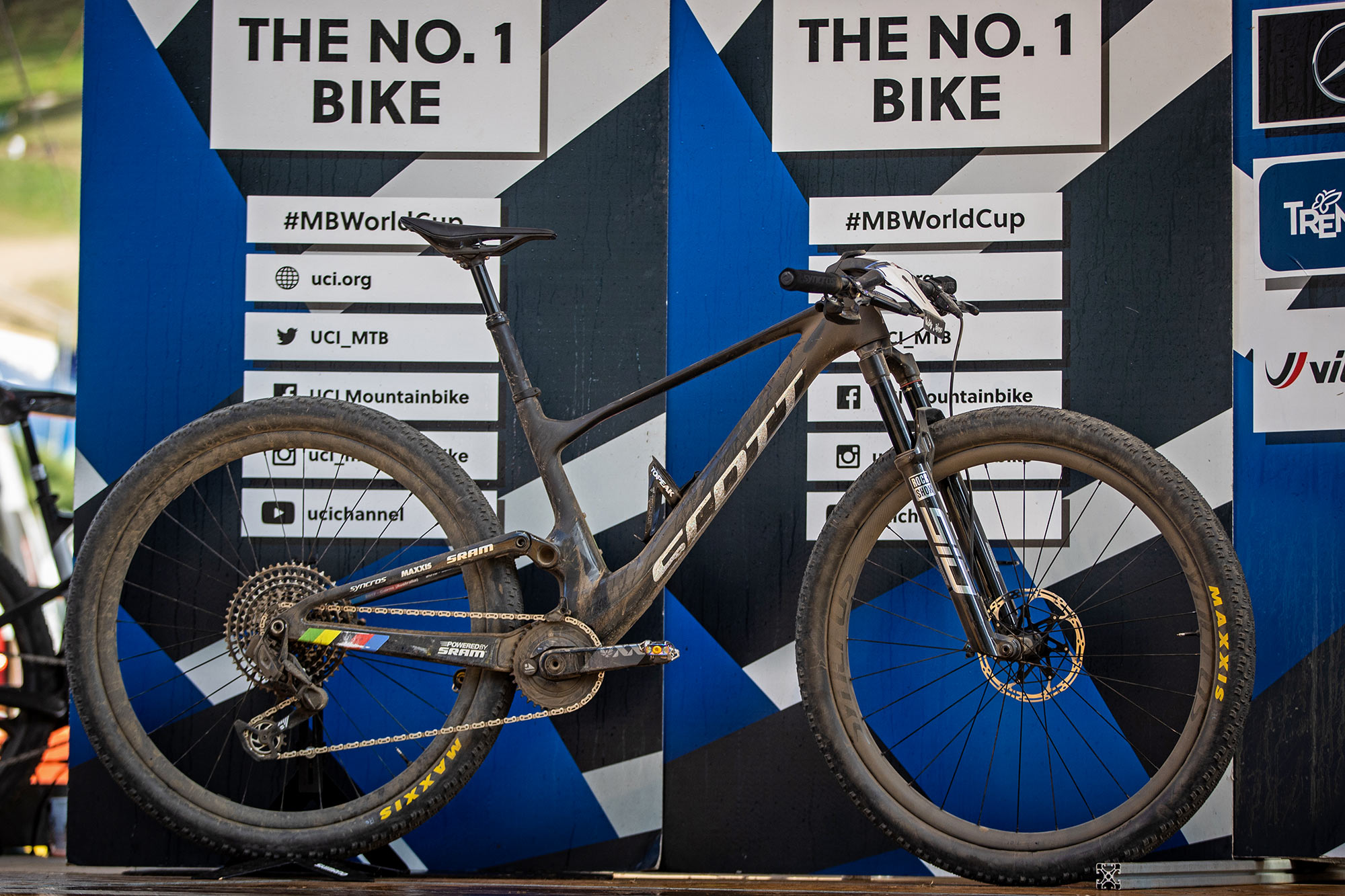 We first got a look at SRAM’s not-so-secret-anymore Eagle AXS derailleur without a hanger last week, following N1N0’s record 10th XC World Championship title. And then again on the as-yet-unreleased BMC Fourstroke XC bike that coincidentally also seems to have given away the coming soon timing for the new SRAM kit. And now Nino Schurter has earned an 8th overall World Cup series title in Val di Sole, putting himself and his Scott Spark RC back on top of the UCI XCO podium. 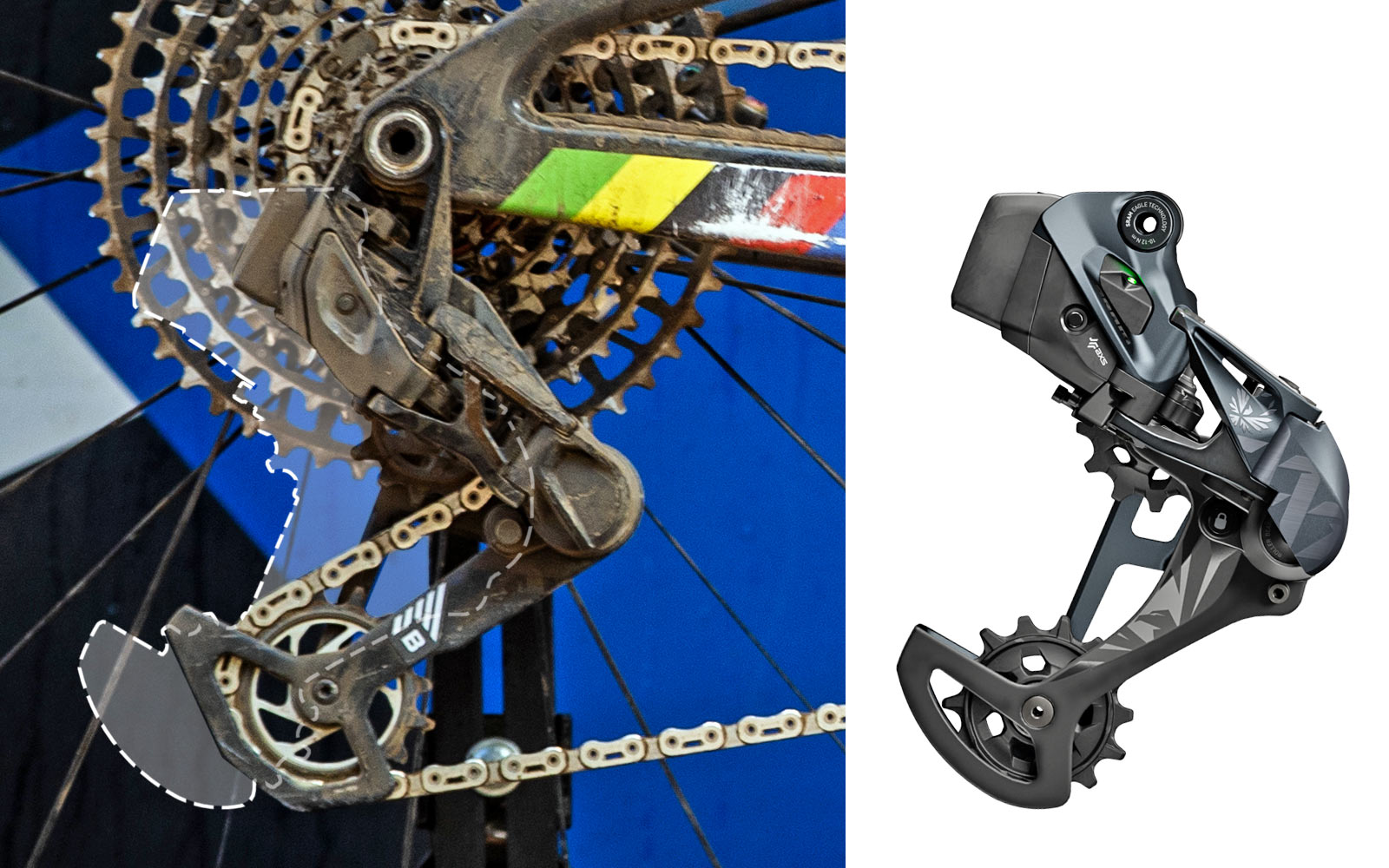 We’ve obviously mentioned the lack of a derailleur hanger in SRAM’s new direct-mount BlackBox Eagle AXS derailleur prototype. And we also described how it is missing hi/lo limit screws… and maybe even the B-tension screw (read what that means here.)

But it’s also worth noting that this BlackBox Eagle AXS derailleur apparently doesn’t stick out from the frame as much (like a Shimano Shadow derailleur) AND it sits much further forward.

The outline above is the current Eagle AXS derailleur’s position on the current Scott Spark RC with the already compact SRAM universal derailleur hanger (UDH). Shifting up and forward (& inboard?) means this prototype derailleur is better protected from impacts AND it gets more chain wrap around the cogs. That likely means improved chain retention with less chain tension, which means less drivetrain drag, i.e. free watts! 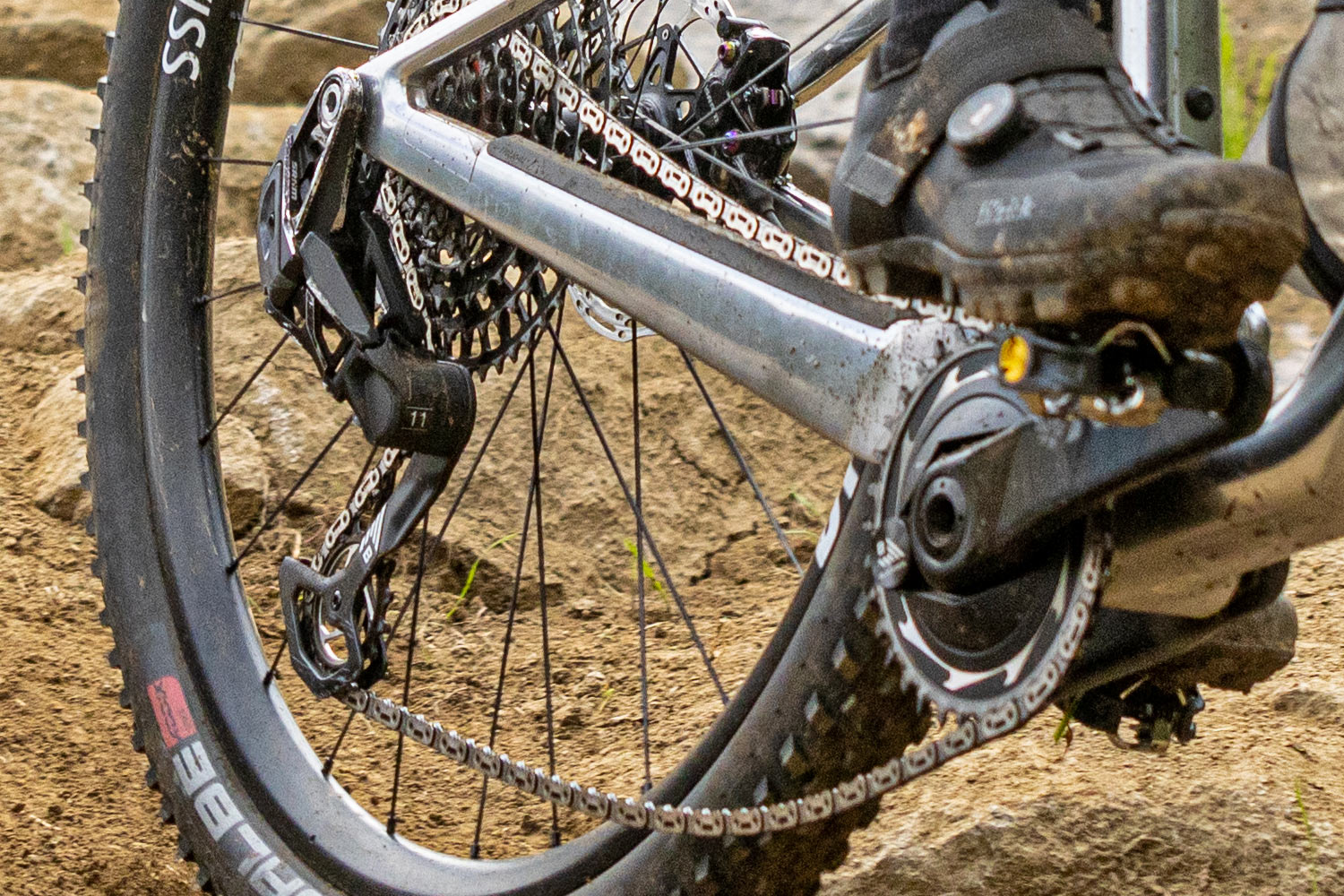 We also get the feeling that this BlackBox derailleur also ditches the mechanical Type 3 Roller clutch and replaces it with the hydraulically-damped clutch we found a SRAM patent on four years ago. 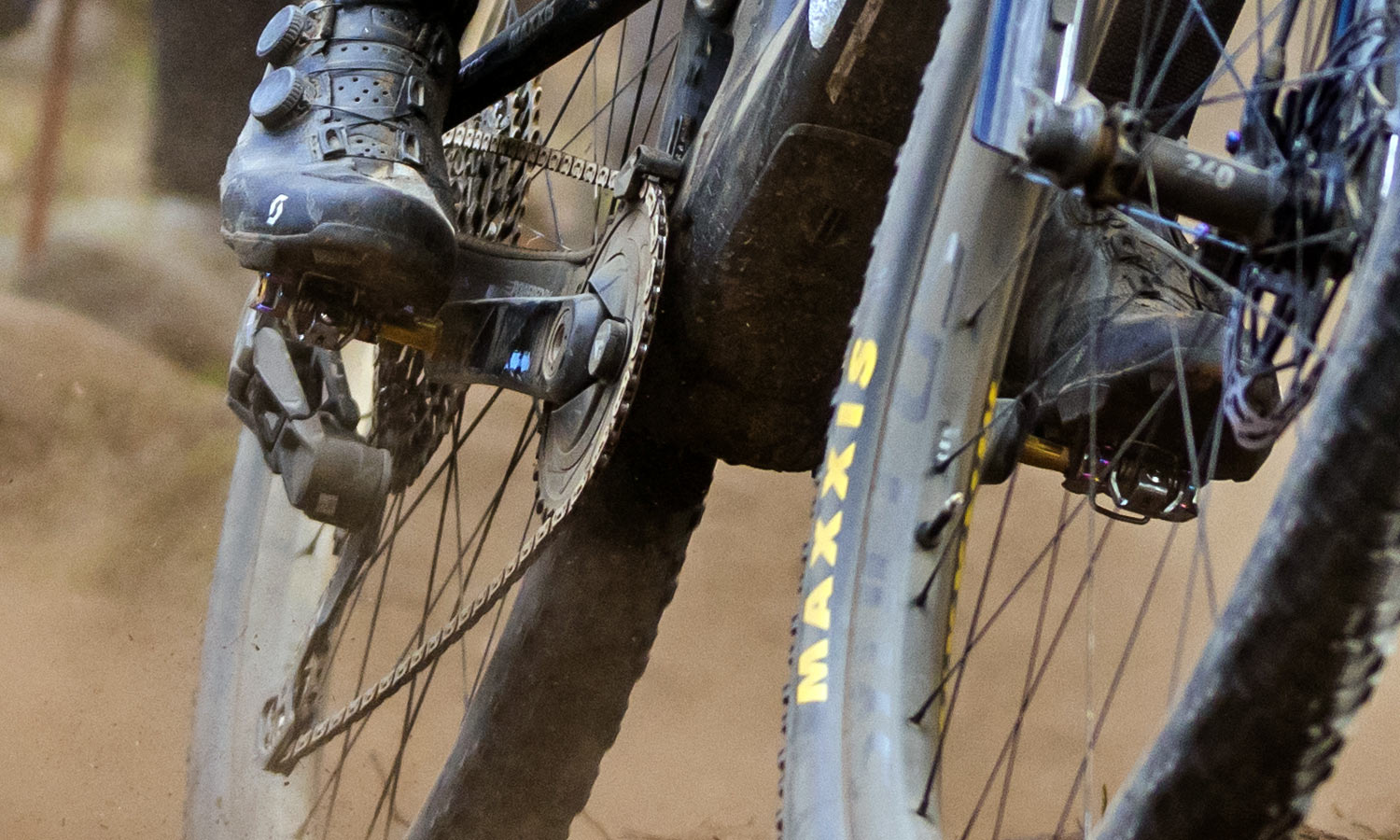 The shape of the P-knuckle on this prototype derailleur is completely new, with a more cylindrical shape and no outboard tool bolt head to access.

Interestingly, this dusty front racing view makes some black masking tape visible on the top of the outer parallelogram, suggesting that even Nino’s prototype already has some production naming or graphics being covered up for the time being, 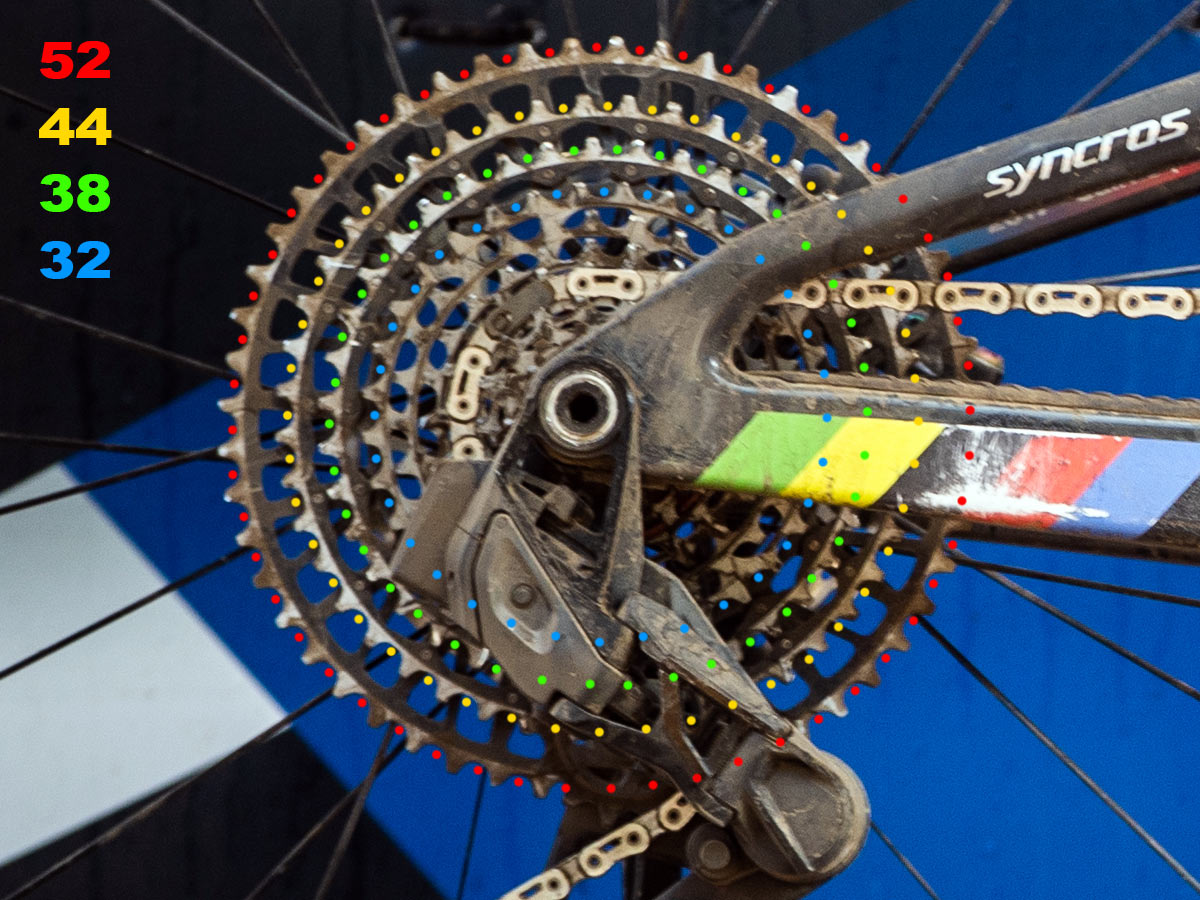 We already broke down the new construction of the prototype Eagle 12-speed cassette – 3 upper alloy cogs pinned to the middle (11th) cog as their carrier, plus a machined X-Dome cluster of the remaining 9 gears.

What we now also see are revised gear ratios for the BlackBox SRAM Eagle SL cassette. Overall gearing is the same 520% with 10-52T cogs, but the spacing is tighter for smoother shifts in these easiest gears. Now, the 52 will step to a 44 then a 38 (compared to the current 52-42-36) so riders can maintain a smoother cadence up steep inclines. That effectively means that the 10th & 11th gears will be a bit easier as well, possibly making them more versatile. The lower 10-32 cogs appear unchanged.

The new smoother steps are more like those of the original 10-50T Eagle days, but while keeping the wider overall range. 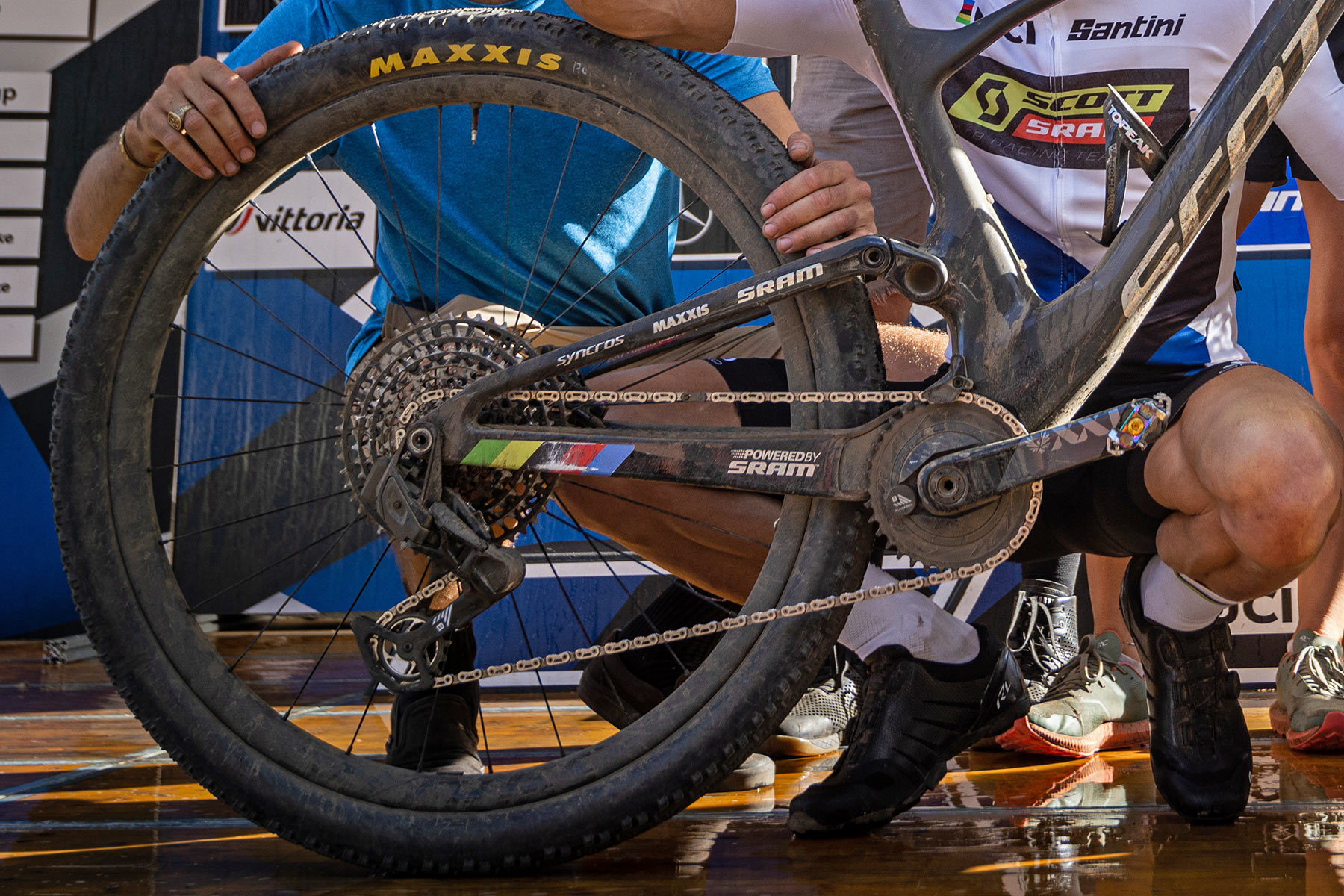 The new Eagle FlatTop chain takes Red’s larger-roller flat-topped chain to the next level with lighter, hollowed-out side plates. It also gets a new T-Type designation to remind you that it will not be backward compatible with other Eagle 12-speed cassettes (or maybe even most chainrings?)

We don’t really see anything more, but it does have a FlatTop-shaped PowerLock quick link. But that’s nothing new as the same shape is already shared by SRAM Red & XX1. 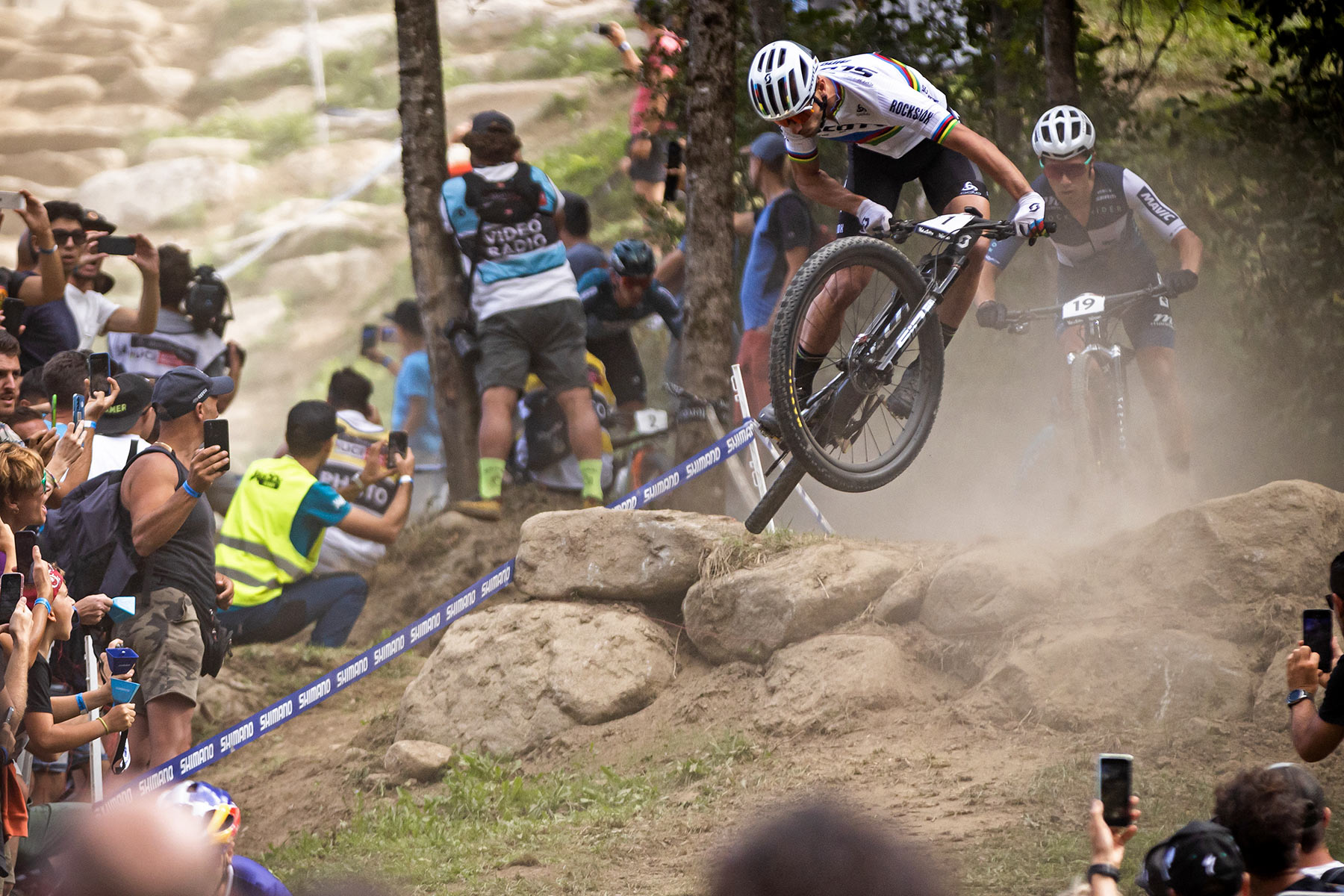 We don’t have any official word from SRAM besides the standard type of ‘of course, the world’s best pros riders are testing and helping to develop the next drivetrain advances’ replies. But… BMC’s countdown timer on their new Fourstroke teaser landing page has a cropped image of a more polished, seemingly production-ready hangerless SRAM derailleur. And their launch date is October 5, 2022.

Less than one month to go, now… stay tuned!

It looks like Sram has up[ped] its game in a major way. And I’m sure the price will reflect it!!

The hangerless / ‘direct’ design reminds me of early Saint.

Thankfully it doesn’t require a proprietary axle/hub like Saint did!

I know, right? Can you imagine having to make sure you have the right axle and hub instead of a whole dedicated frame?

Don’t get me wrong, I’m all-in on the UDH design. But right now it’s only compatible with a few major-ish manufactures and a couple small builders. Saint worked on every bike we put it on, and we had a guy that modified King hubs to work with it too.

I think “a few” is a major understatement. Most bikes now days use the UDH.

“Shifting up and forward (& inboard?) means this prototype derailleur is better protected from impacts AND it gets more chain wrap around the cogs.”

It’s not really much upward, and the “inboard” factor is unknown, you even questioned it directly… So the protection from impacts is also unknown.

Nino skidded, fell, got up and won his 10th World Cup in Les Gets. Wouldn’t say the same if he is on a conventional derailleur .

This is a really nice article with quite a bit of sleuthing. Great work.

If you can have radial-spokes on the cassette sprockets, then the Jockey wheels are badly-designed and if you can’t even get jockey-wheels right…

My opinion: SRAM seems to rush “new” engineering designs out, allowing the cycling community as a whole to do its R & D for them. No THANKS. I’ve had too many garbage SRAM components, thanks in part to the bike company that leveraged a deal to outfit their bikes with said crap.
Cheers