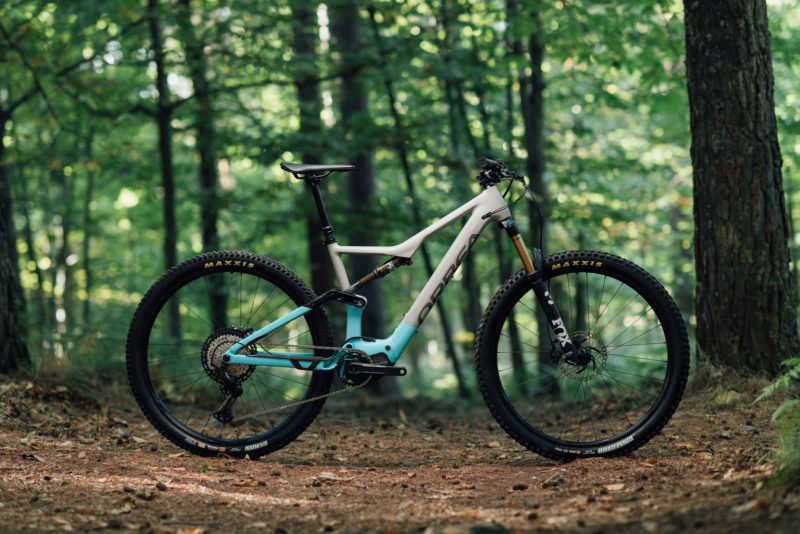 Orbea has swapped out carbon for alloy, introducing a class-leading lightweight aluminium eMTB in the form of the Orbea Rise Hydro. Taking the same reduced torque Shimano EP8 RS motor seen on the Rise Carbon, Orbea has looked to replicate that reduced-assist, lightweight ride experience, distilling it into a three-strong range of more affordable aluminium bikes. Here’s a closer look at the Orbea Rise Hydro 140mm travel 29er eMTB. 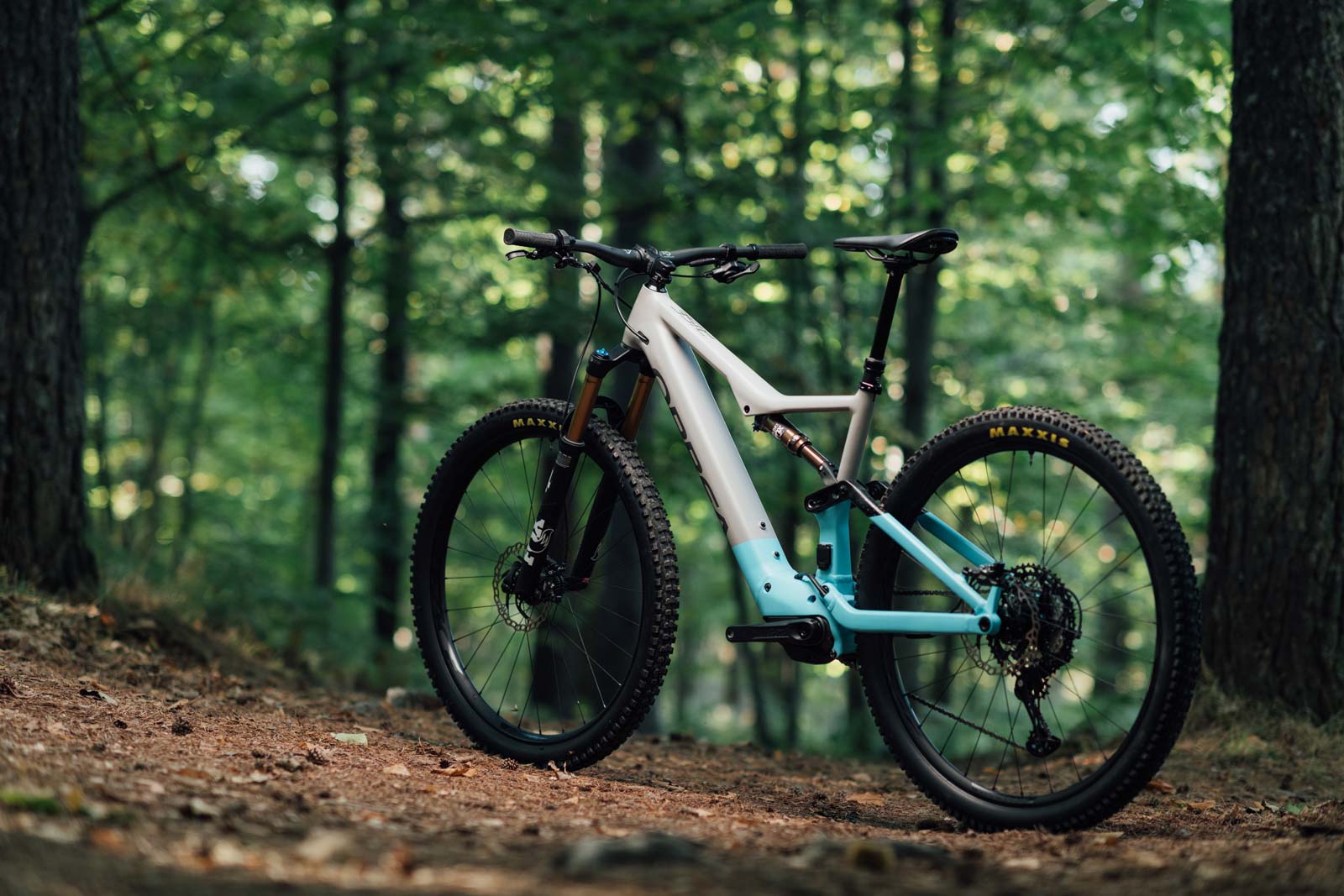 The Orbea Rise Hydro frame weight comes in at a claimed 3.4 kg, only 100g heavier than the equivalent size, equivalent travel aluminium Occam frame (which isn’t an eBike)

When Orbea introduced the Rise Carbon earlier this year, they took a risk in reducing the power output of a Shimano EP8 motor in an effort to produce a bike that was “less e and more bike”; a bike that pedals and descends more like a regular non-eBike, but that still gave riders that little bit of assistance to turn big days into epic ones. The risk paid off. 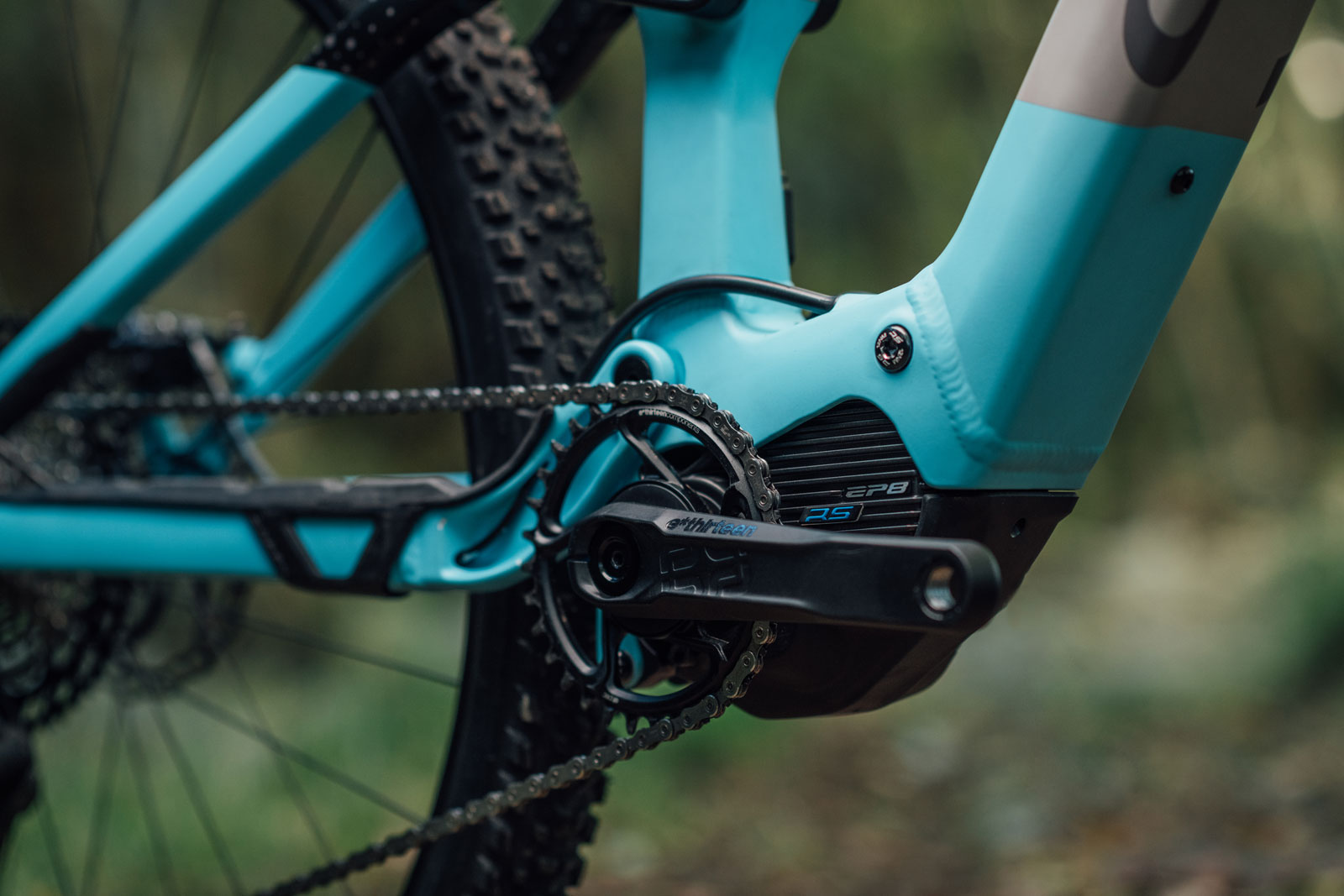 The custom Shimano EP8 RS motor was optimized to provide maximum assistance between 75 and 95 strokes per minute, the cadence at which we tend to pedal our regular non-eBikes at.

With the combination of an ultralight frame construction and a relatively small 360Wh battery, Orbea ended up producing one of the lightest full suspension eMTBs on the market, with the M-LTD model weighing a claimed 16.2 kg in size medium. Despite the small battery, the reduced 60 Nm torque of the custom RS EP8 motor, thus greater reliance on the rider’s legs, means the battery will actually last up to 50% longer than the same capacity battery on a “standard” eBike.

In a bid to bring that same ride experience to more riders, Orbea has now introduced the Rise Hydro, swapping out carbon for aluminium to bring the price down to something within closer reach; the entry-level H30 model retails at $5,299 USD. It still rolls on 29″ wheels, still runs 140mm rear wheel travel, and geometry remains identical. 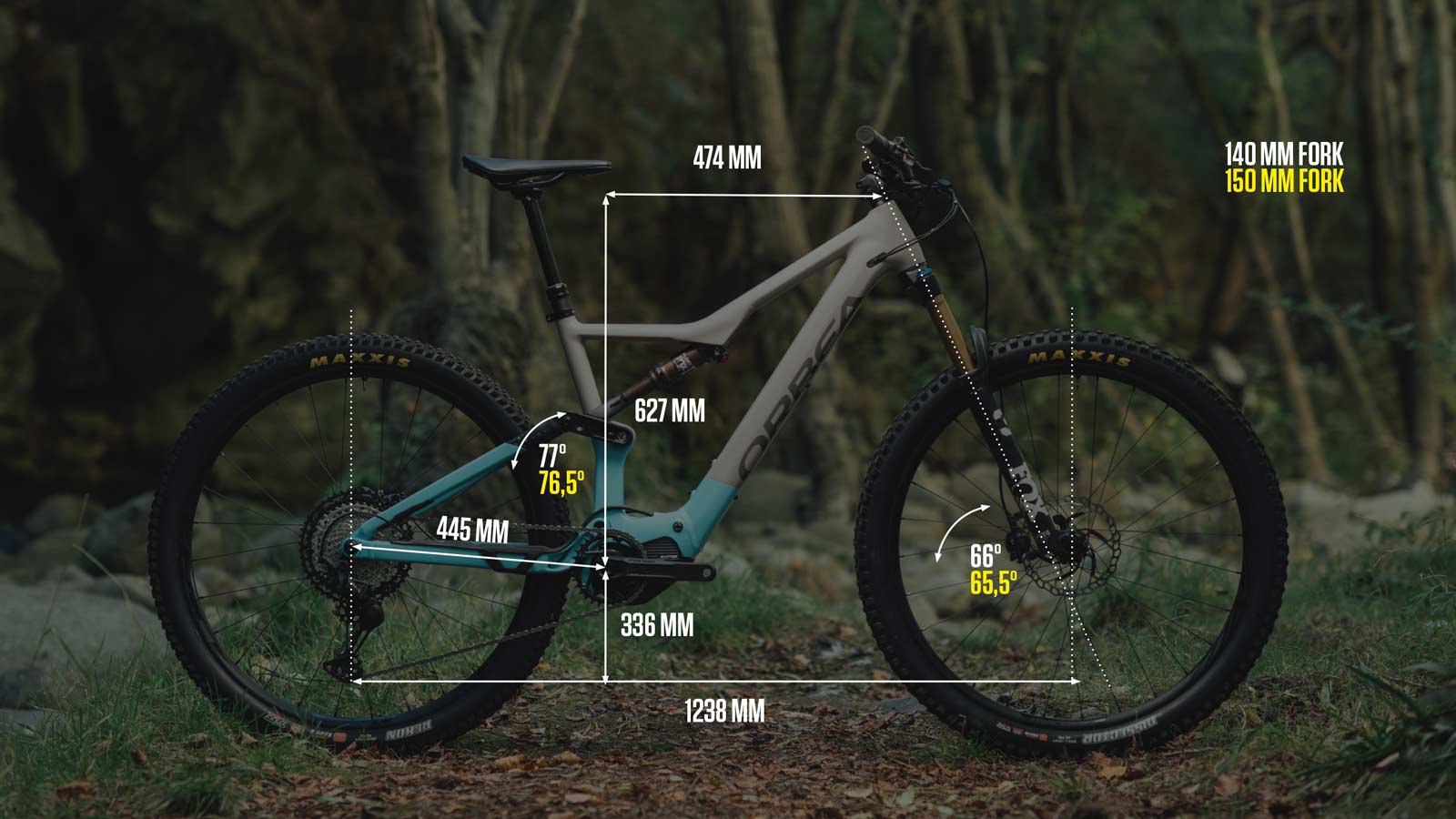 Orbea say they were so happy with rider feedback on the Rise Carbon they saw no reason to meddle with the geometry, keeping the head angle at 66°, seat angle at 77°, and the reach at 474mm in size large. Stays are 445mm, consistent across the S-XL size range. In the complete geometry chart below, you’ll see two numbers quoted for HA, SA and BB drop; that’s because, just like we saw on the Rise Carbon, riders can choose to spec their Rise Hydro with a 140mm or a 150mm travel fork.

With the Rise Hydro, Orbea wanted to give riders a complete off-the-shelf bike that wouldn’t necessarily need a range extender for most rides. As such, this one gets a 540Wh battery as compared to the 360Wh battery seen on the Rise Carbon. 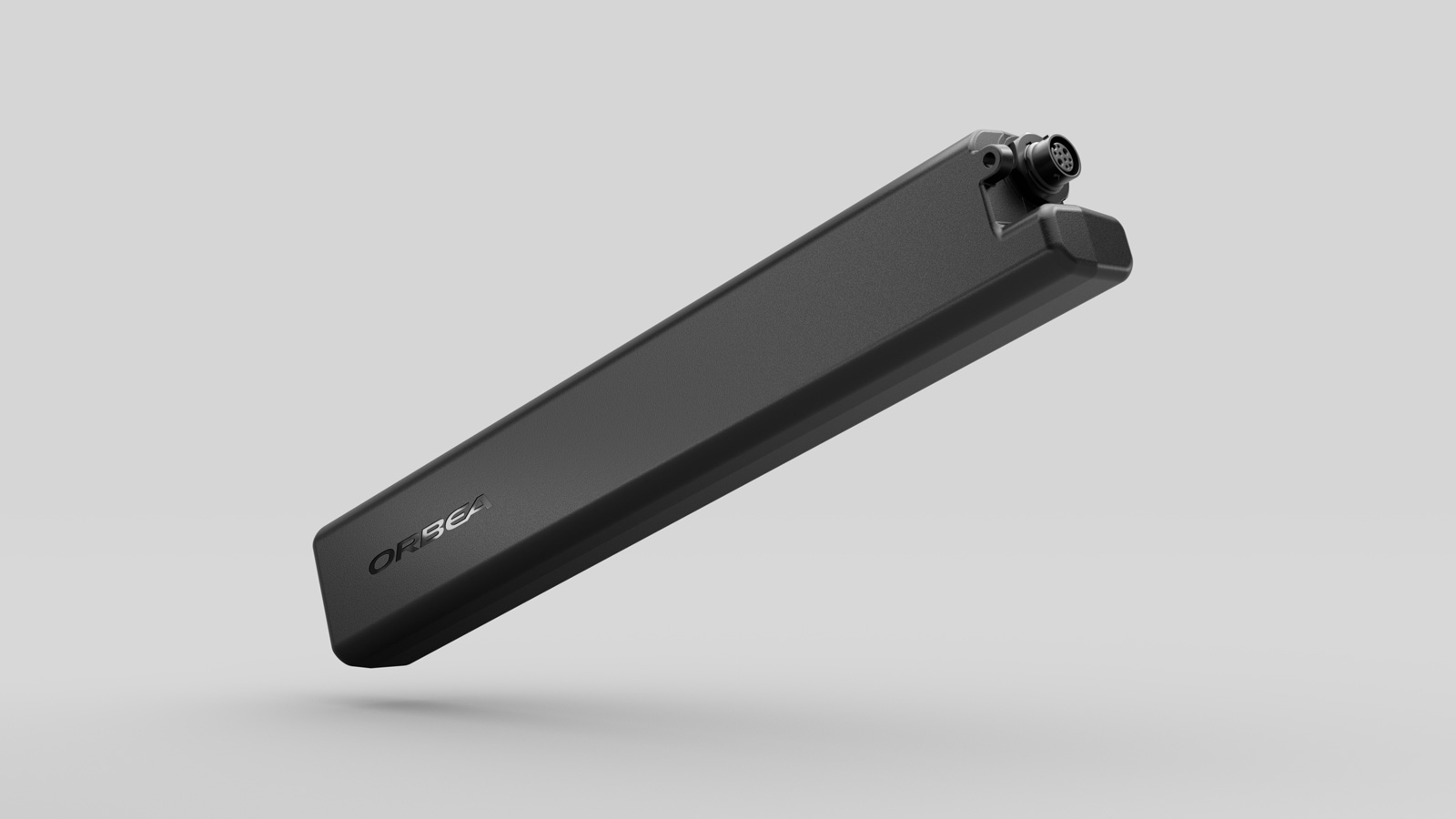 It is no ordinary eMTB battery, however; this is Orbea’s proprietary 540Wh battery in which the distribution of the 21,700 cells, arrangement of the housing, wiring and brackets has been optimized to deliver what they claim is one of the highest energy densities on the market. 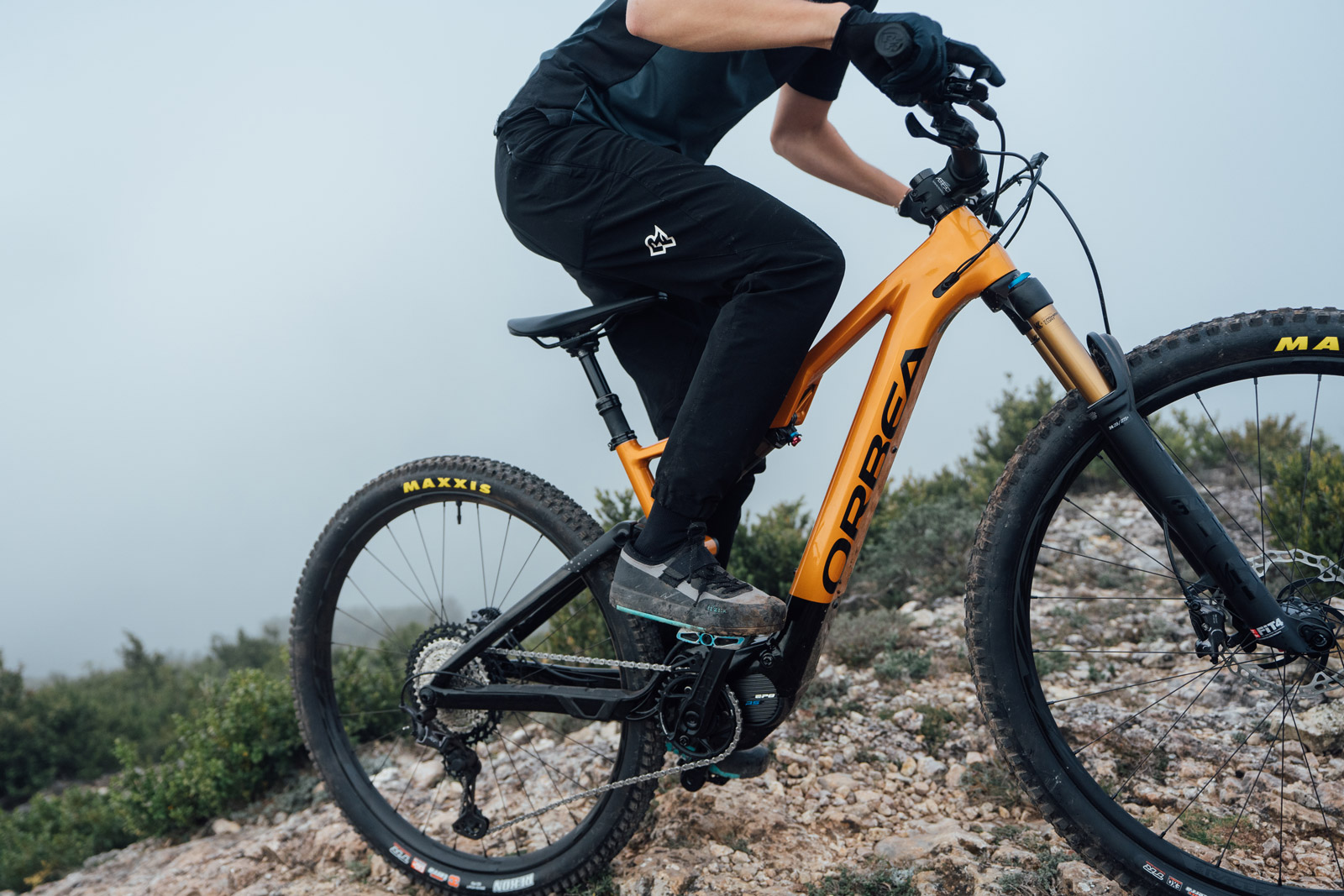 The Rise Hydro has a maximum rider weight limit of 130kg

While the range of any eMTB is affected by a multitude of factors beyond the motor and battery, such as rider weight, terrain and temperature, Orbea has given us some ball park figures for the amount of elevation gain you can expect to get out of your 540Wh battery; 3500m in Eco with a 5.5 hour ride time, 2200m in Trail with a 3.5 hour ride time, and 1600m in Boost with a 2.5 hour ride time. 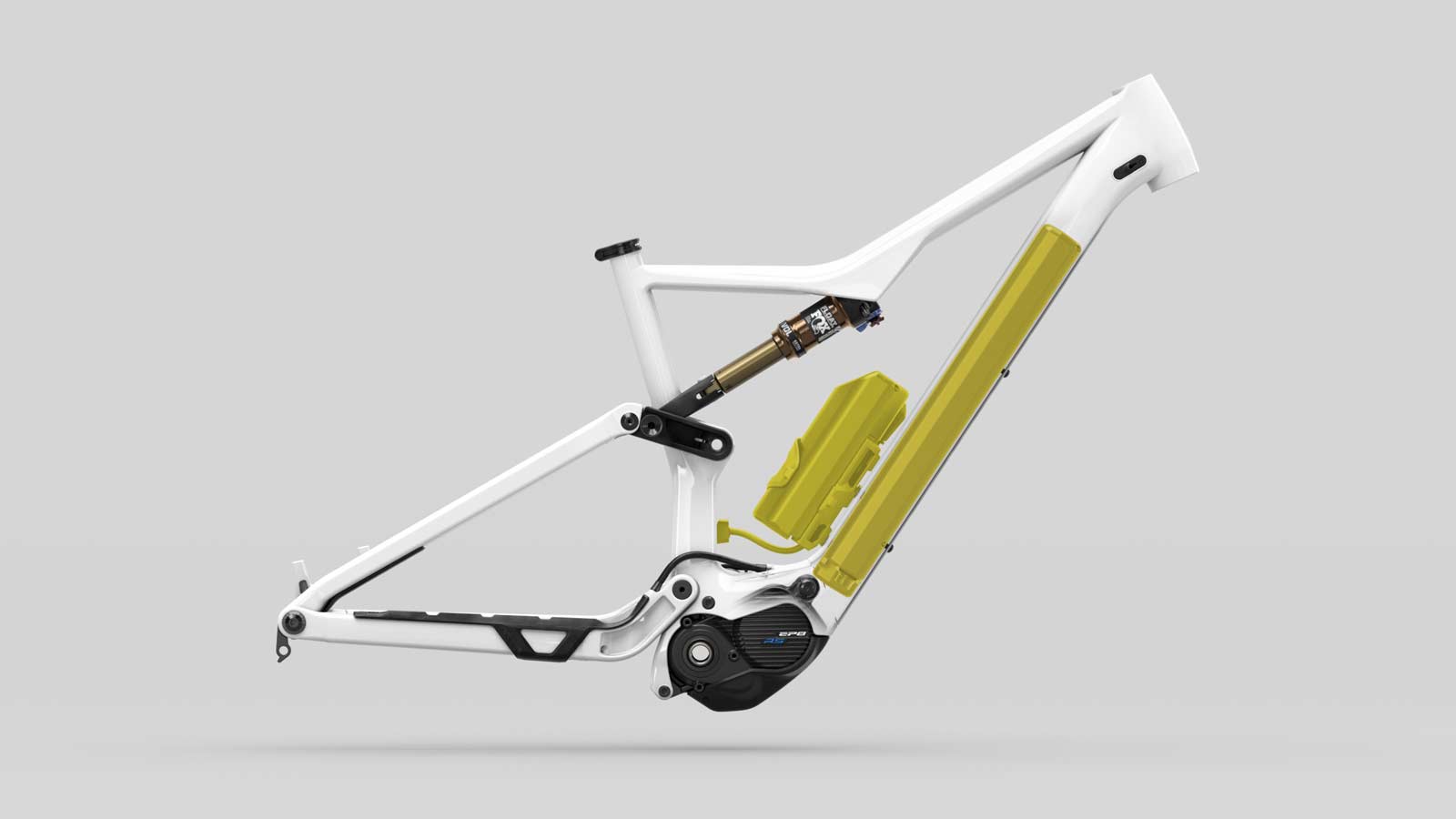 The sleek, neat aesthetic of the Rise Hydro and its class-leading weight come at a cost; the battery can only be removed with removal of the EP8 motor. However, Orbea claim the lack of battery door on the downtube results in a 70% increase in front triangle stiffness.

If you find the 540Wh simply doesn’t last long enough for your mega rides, Orbea do offer a 252Wh range extender battery for $599 USD that can be mounted to the topside of the downtube, replacing the water bottle cage. That takes the maximum battery capacity up to 792Wh; Orbea claim that will get you 5000m of elevation gain over an 8 hour ride in Eco mode. 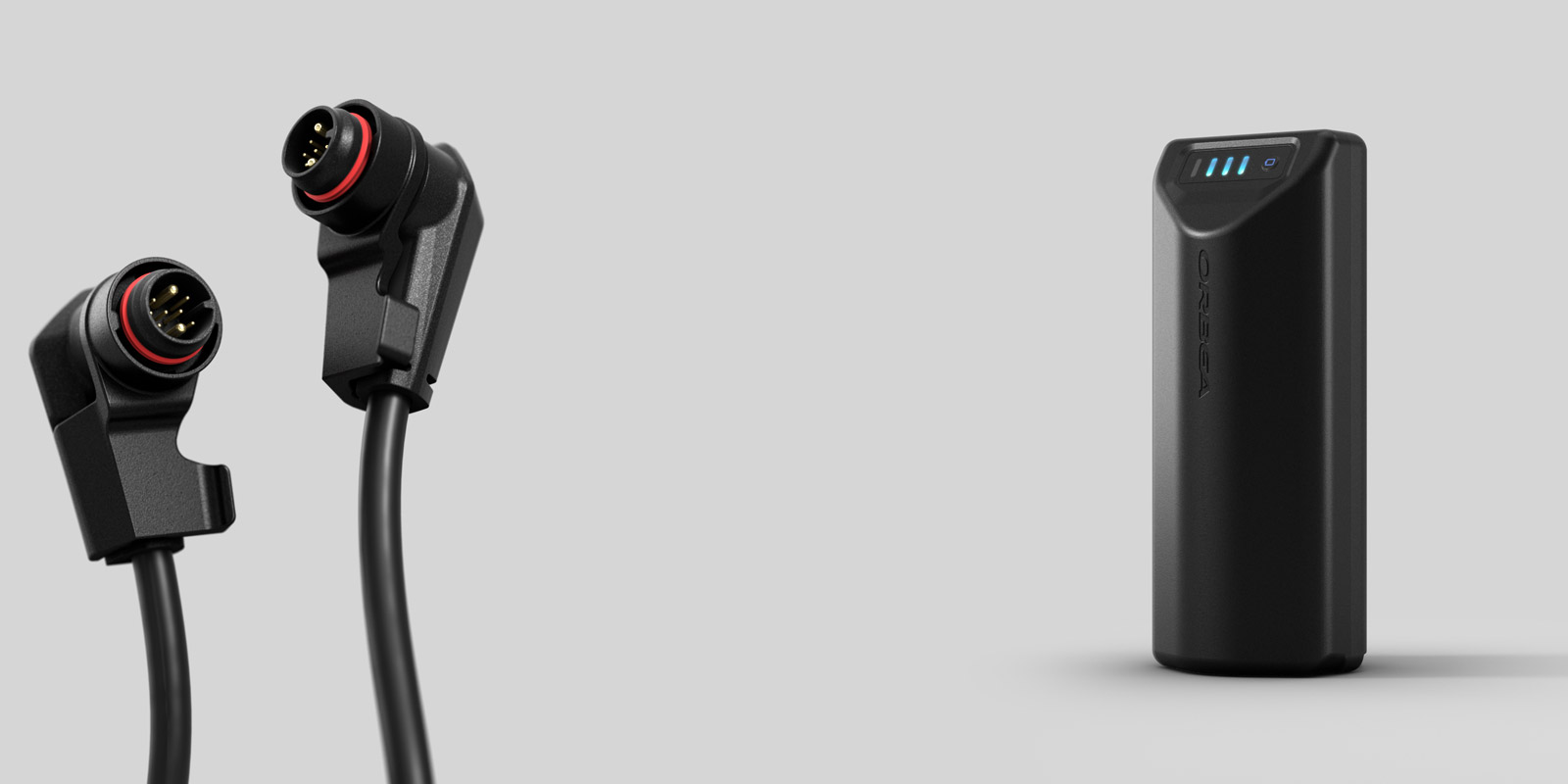 To keep charging times sensible, Orbea has developed a new smart charger for the aluminum Rise. Charging at 4A, the main 540Wh battery will reach 80% charge capacity in just 3 hours. The range extender charges at 2A, however, only one charger is needed as the smart charger is able to automatically adjust the charge voltage to the different batteries. 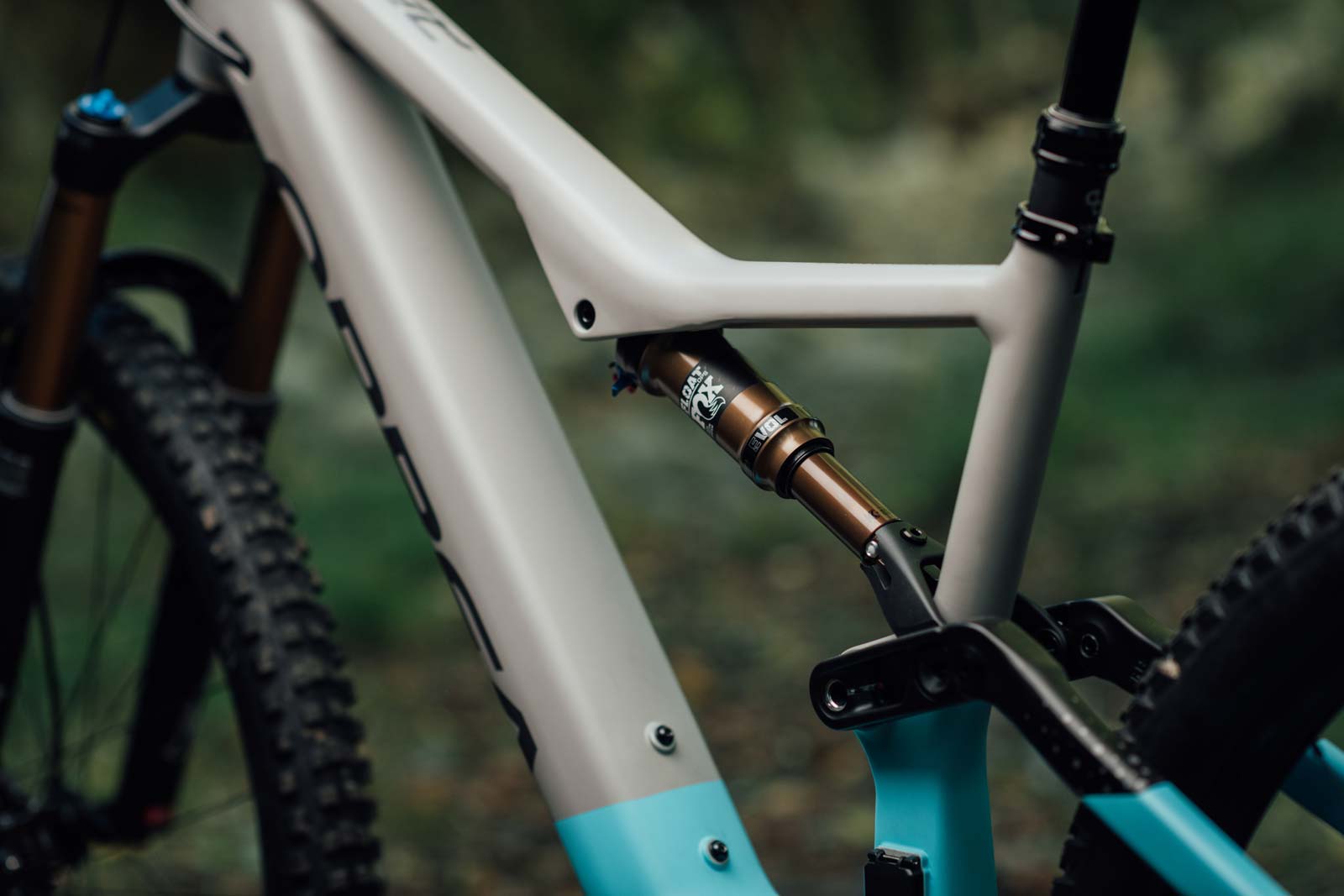 You may have noticed the startling lack of welds on the alloy Rise, giving it a very similar aesthetic to the carbon Rise. While you can’t really see them, they are there; all three models of the Rise Hydro receive a polishing treatment to smooth the welds at the tube joints. It’s not all about looks either – Orbea say the process actually increases the aluminium’s fatigue strength too. 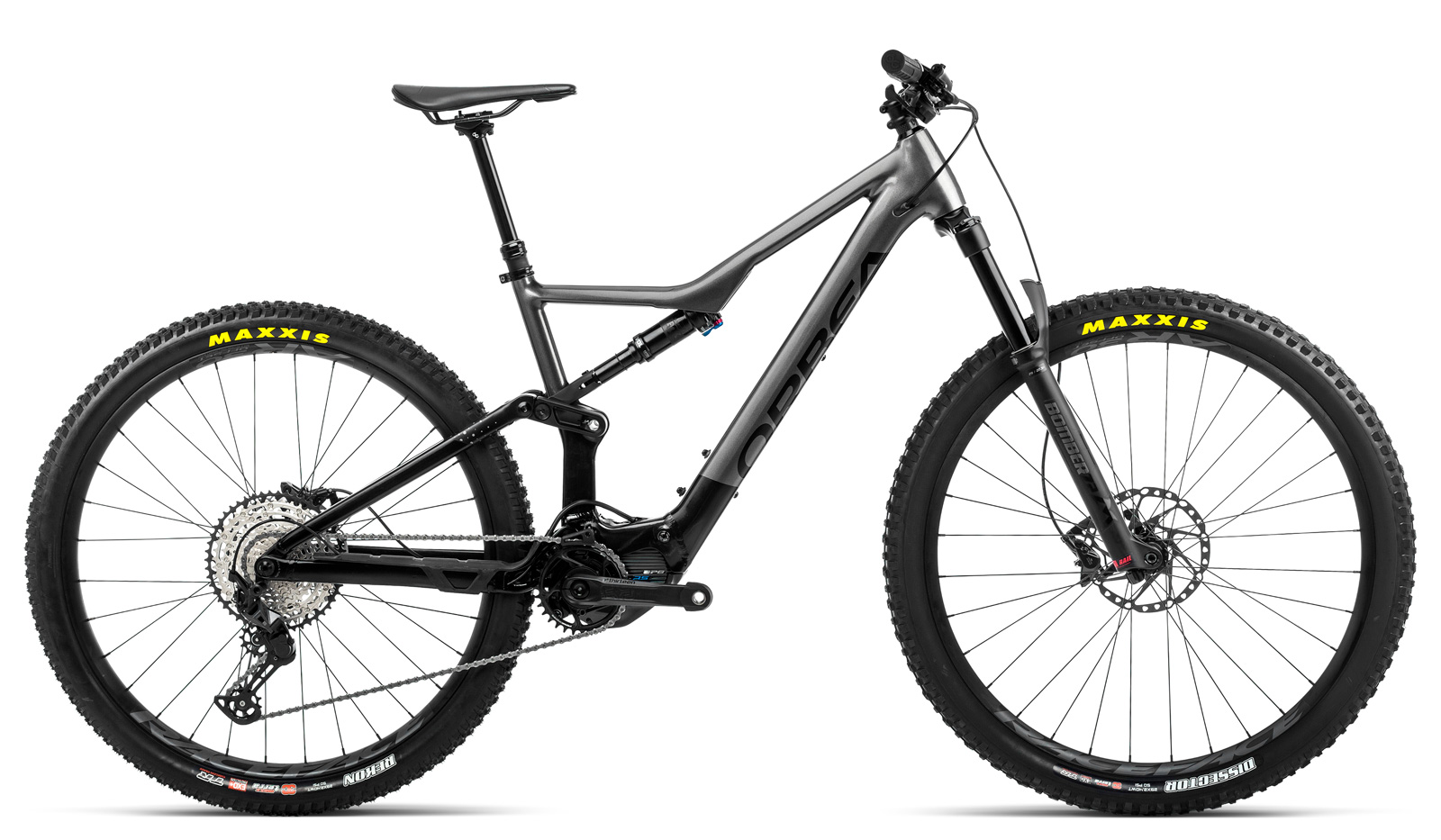 The Orbea Rise Hydro is available in three models, all of which are available immediately with complete bikes having already been sent out to retailers. At the wallet-friendly end is the Rise H30 retailing at $5,299 USD. 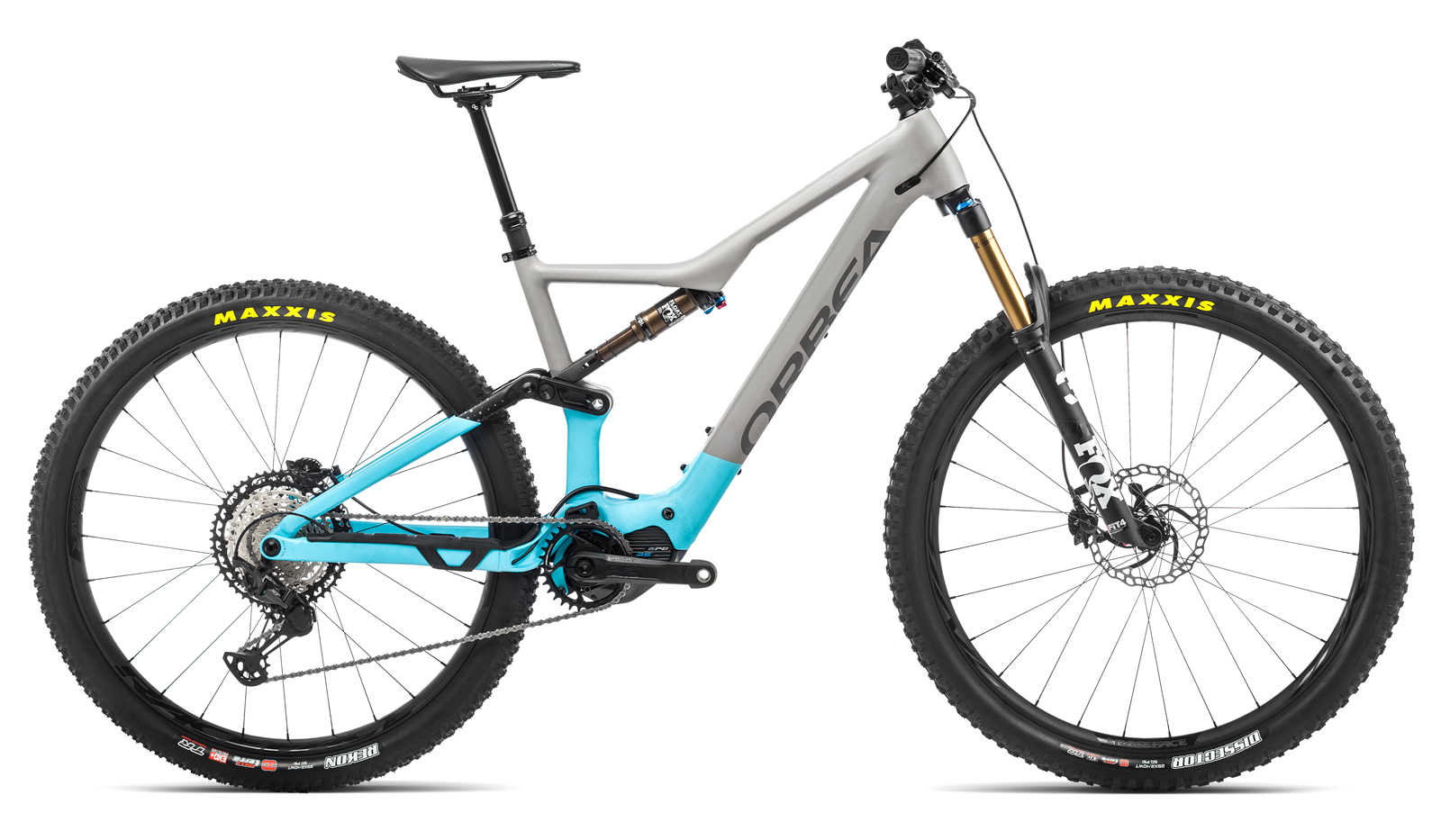 At the top end is the Orbea Rise H10; it also gets the 140mm travel fork stock

That one, and the top-end Rise H10 that will set you back $7,299 USD, come with a 140mm travel fork stock. The mid-range Rise H15, on the other hand, gets the longer 150mm travel fork resulting in the slacker set of geometry figures; that one will cost you $6,299 USD. For the full list of specs on each model, head to the Orbea website. 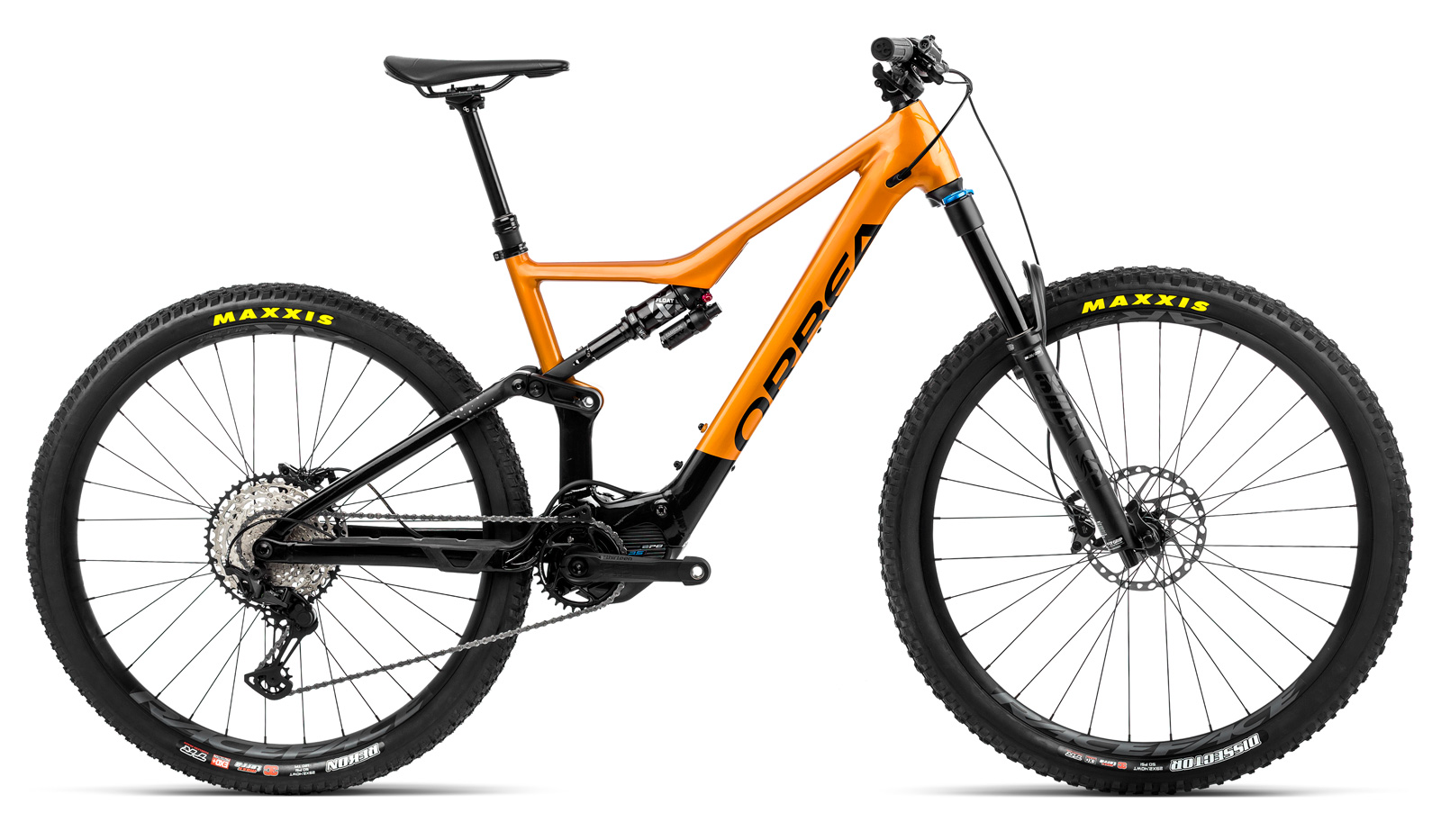 I was close to order the 2021 carbon version. Just missing some cash, so this one is interesting.
Still the MIO carbon version is much more appealing

Do you send to SOUTH Africa?