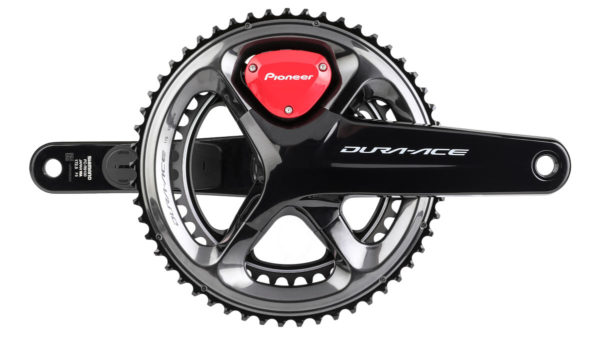 Since launch, they’ve made a lot of minor hardware and software updates, but now, they’re launching from a clean slate. Well, not entirely. Everything they’ve learned from years in the market, supporting top level pro teams and weekend warriors alike, carries over. What’s new is the way they’re bringing that experience to your bike.

Pioneer already had some of the highest definition power measurement on the market, showing your complete power profile throughout the pedal stroke in excruciating detail. And their experience with automotive products has helped them hold up to years of heat, vibration and moisture has made their power meters some of the most reliable. Now, they’re replacing everything and making it better. 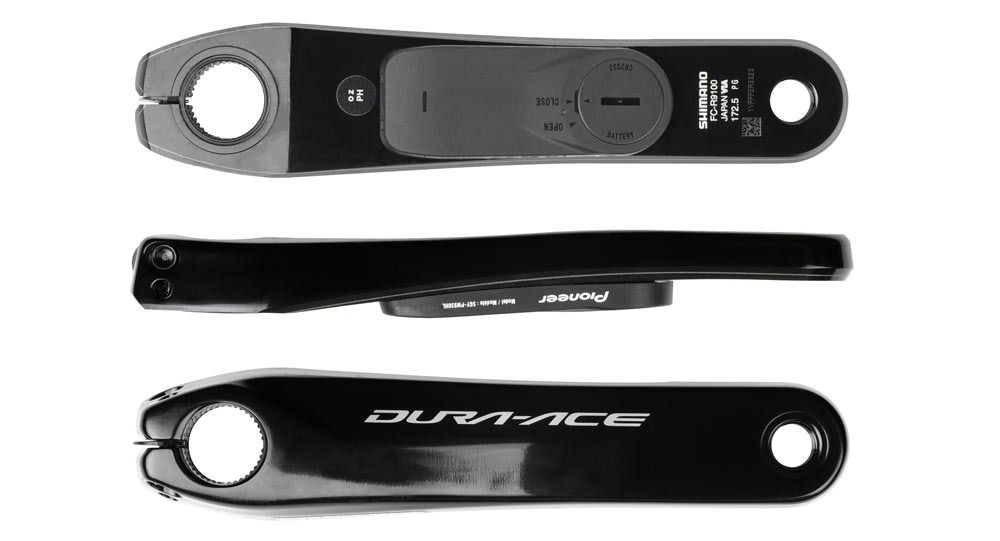 Before we dive into the really deep tech, there are a few top level improvements worth mentioning. First up, they’ve added Bluetooth connectivity, letting it work with more head units, phones, etc. Second, they’ve slimmed down the left-side strain gauge unit to make it more compatible with more frames, particularly Trek. Third, they’ve improved their already very good water- and dust-proofness to IP66 and IP68, meaning there’s pretty much no riding condition you can do that’ll mess with the electronics. Even pressure washing shouldn’t hurt it. But, it keeps the same easy-to-access battery door hiding a single CR2032 battery that delivers 180 hours of use. Oh, and if the battery on one side dies while you’re riding, the other side automatically switches to “single leg” mode to provide averaged dual-leg power measurement. 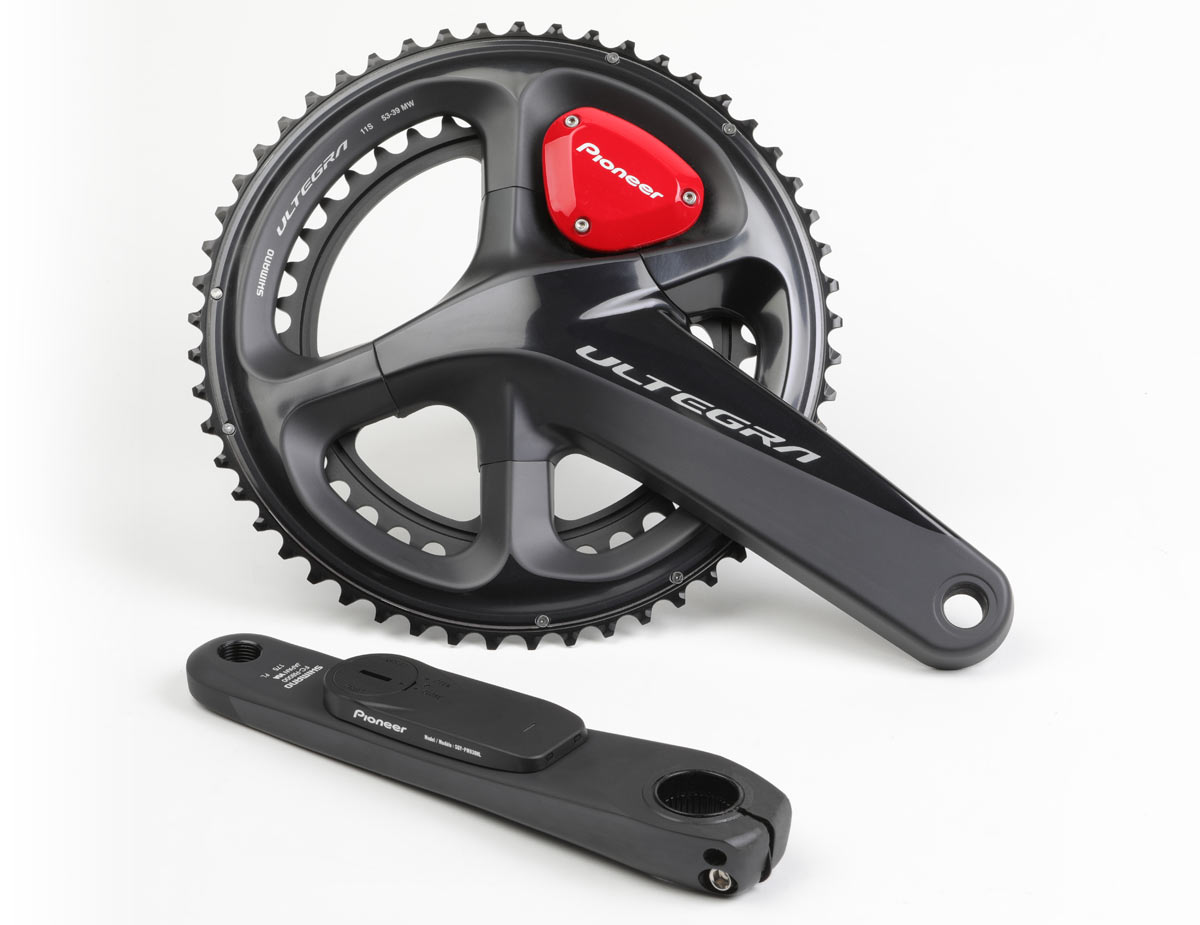 The left and right Shimano crank arms are built differently, so Pioneer has designed left- and right-specific strain gauges since they launched the 9100 compatible units. They say this provides far better accuracy than brands using the same hardware on both crank arms. 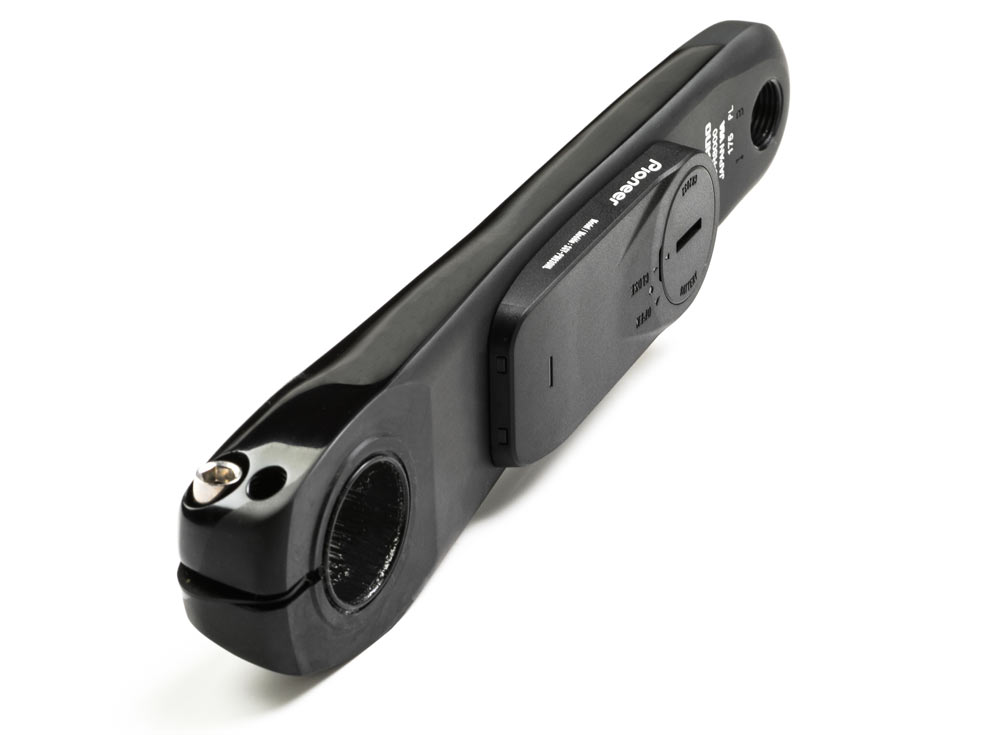 The system measures force direction in 30º segments, giving you a very detailed look at how you’re applying pressure through the pedals. Not just where, but in what direction it’s being applied…including the dead zones and upstroke. 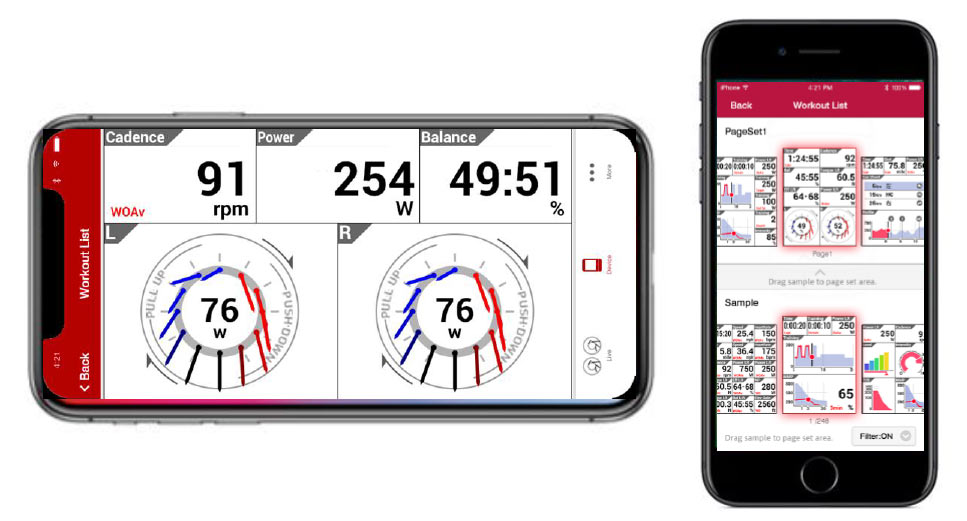 The Pioneer Cyclo-Sphere Control App takes advantage of the new Bluetooth antenna by letting you update and adjust the system through your smartphone. Within their app, you can view your pedaling data on your phone’s screen, which then lets you beam it to Apple TV or Chromecast or similar, so it’s easier to view on a big screen. For shops, this can help them quickly visualize performance during a fit, and for coaches the benefits are many. 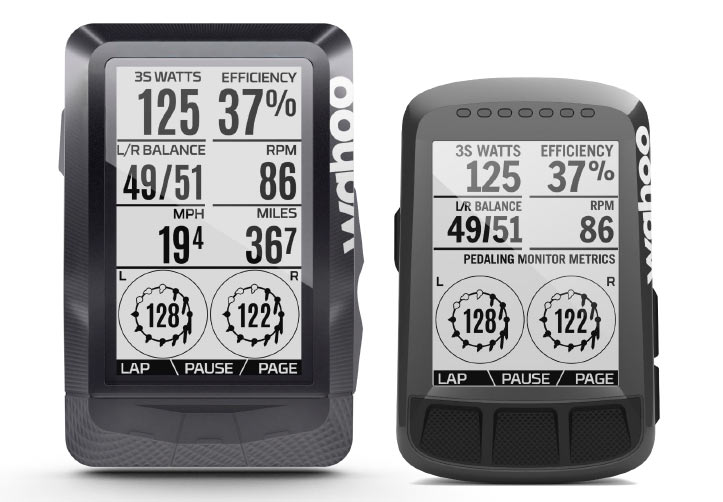 Both units will have a firmware update coming soon that’ll make them able to show Pedaling Monitor data from any Pioneer power meter ever sold. And in typical Wahoo ease-of-use fashion, as soon as their smartphone app detects a Pioneer crankset, it’ll automatically add a page to your head unit so you can see that data. And within the Wahoo smartphone app, you’ll be able to set up and adjust the Pioneer parts just like you would through the Cyclo-Sphere Control App.

The last bit of this partnership happens after the ride, and is coming later this fall. Once your ride is done, Wahoo’s computers and cloud will be able to automatically push your ride data to Pioneer’s Cyclo-Sphere cloud system where you can really dive deep into the granular details of your pedal stroke, etc. 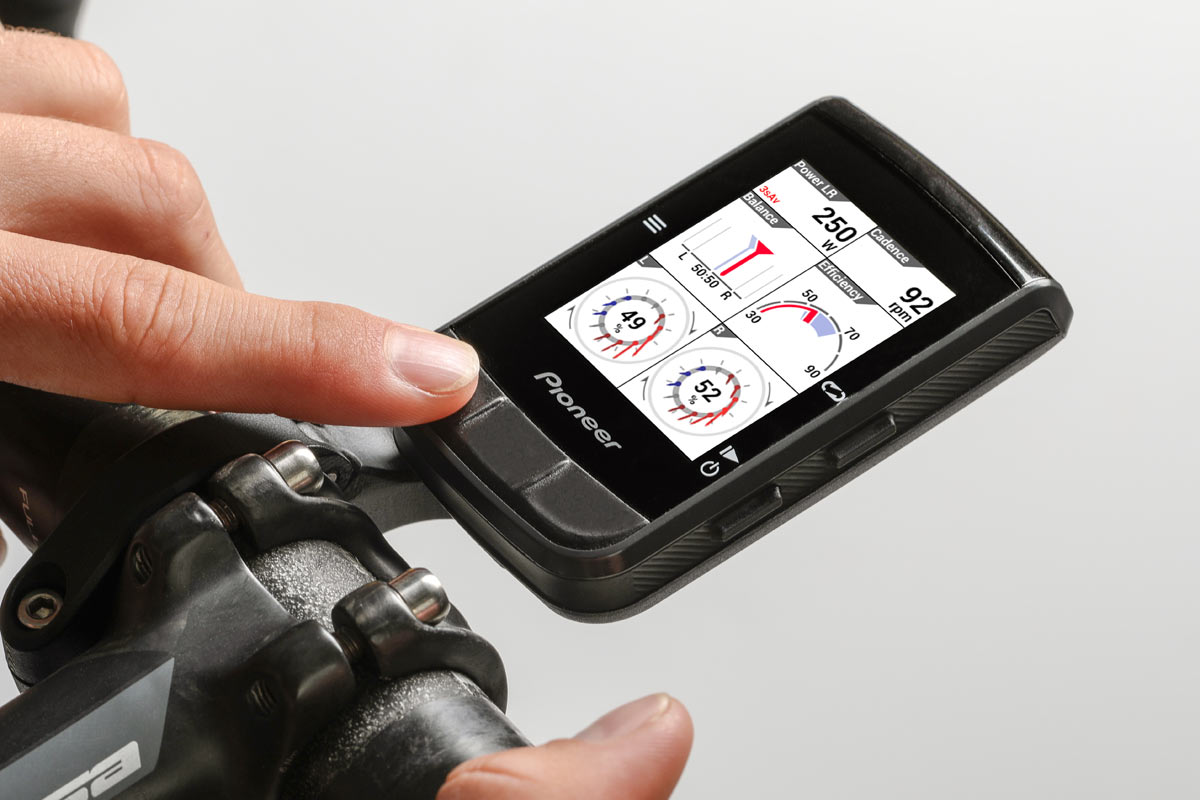 It drops the touch screen, relying on hard physical buttons during the ride, but adds an app that lets you set up the screens to your liking. It also adds a more advanced A-GPS system,  which double checks its location with the GPS sensor in your smartphone to constantly verify where it is. This helps prevent GPS drift, which paints a more accurate picture of where you are, and prevents it from thinking your on a different Strava Segment or something. Perhaps more useful, it helps it grab its position much more quickly while it’s booting up rather than rely on satellite location to find its initial place in the world.

It also has a built-in altimeter, accelerometer, barometer and thermometer, all hiding behind a 2.2″ color screen. Underneath all that is a Wahoo-compatible mount, meaning it’ll work with any current Wahoo-friendly mount on the market. It’ll ship with a plastic mount in the box if you don’t already have one.

The Bluetooth means you can also immediately upload your ride data to the cloud (Cyclo-Sphere, Strava, etc.) by running it through your phone’s connection. A set up wizard displays a QR code that you scan with your phone to automatically pair it with the device.

It also adds FE-C communication, which is an ANT+ protocol, that lets it talk back and forth with your smart trainer. It stands for Fitness Equipment-Control, and it lets the trainer show data on the computer screen. It also lets you take a previous ride, put it on the computer, and have it control the trainer to recreate the ride by adjusting resistance to mimic inclines, headwinds, etc. It’ll even convert Bluetooth power meter data to ANT+ so it all shows properly in Zwift. 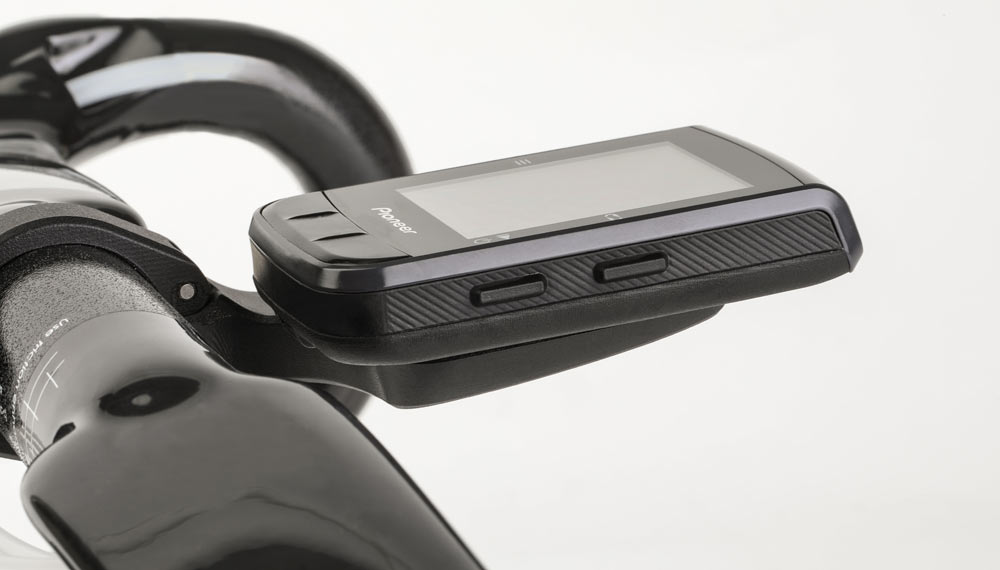 For the first time, they also add full navigation from Strava Live Segments, or download GPX or TCX files and have it give you turn-by-turn directions. It highlights your route, scaling larger (zooming in) as you approach a turn, along with a turn cue with street name at the top. Behind you will be a bread crumb trail, and they’re working on having an elevation cue, too, and there’s an audible tone to alert you to an upcoming turn so you won’t have to stare at you screen. It can also send your ride through Strava Beacon so your loved ones know where you are.

Visually, there are more graphical icons that make it easier to see what’s going on with your pedal stroke versus just numbers. They’ll be able to show shifting and gear data for both Shimano and SRAM Red eTap.

Second from right: Watch your friend’s metrics so you know when to attack!

Race against your friends IRL

Perhaps the coolest feature is the new Pioneer’s Live Partner, which lets you see up to three of your riding partners data on your screen if they’re riding near you. it uses Bluetooth to transmit between the head units, with about a 300 foot max range. While that’ll certainly make for good smack talking, coaches might find it most useful.

So many screen options…and this is just a small sample of ways you can set it up.

Look for the power meters to ship in mid-November, and the cycling computer follows in early December. Pricing for all power meter options stays the same as before, even with all the new features for the Shimano models., and the new SGX-CA600 computer will run $359.

New models are prefixed SBT, which replaces SGY models, in case you’re poking around for deals online. They’re launching only for Shimano Ultegra 8000 and Dura-Ace 9100 at first. The SGY models stick around for the time being to support other brands’ cranksets. There’s no date set for the upgrade on those other brand cranks, but they say it will happen.

Any comment if these new power meters will require magnets?

The old ones can use magnets but don’t require them. Only the really old original versions required magnets, and think that was changed in a firmware update

How do I setup my Pioneer without magnets? I’d love to do that. Purchased it earlier this year and the magnet setup was the only challenging part of installation.

You only needed the magnets for the pedaling dynamics. So if you are running in plain power meter mode, not necessary.

That being said, magnets are a bit more accurate and faster to react than accelerometers.

That cycle computer looks really sweet but anyone knows how good Pioneer support is? As it’s likely the device will require some updates throughout its lifespan and if there’s no reliable support then it’ll be a pointless device

My past experience says they’ll be pretty well supported. I’ve had the CA-500 computer and dual sided Ultegra meter for 2.5 years. Pioneer has done pretty regular head unit FW updates over that time to add new features / on-device workouts and a few PM firmware updates. Never experienced any bugs or issues with the computer, though I more often used an ELEMNT with standard ANT+ power rather than the fancy stuff.

The new models will definitely fix the PM firmware upgrade process via bluetooth, as the old way was super finicky (it involved putting the head unit a few inches away from the crankarms, and a fair amount of waiting and praying).

About 8 months ago my left side unit died (stopped being able to calibrate, which tech support suggested water ingress) and they RMA’ed without much hassle.

I’ve had two Pioneer power meters since 2015 with zero problems. I’m glad to see them modernizing, particularly opening up pedaling dynamics to other head units.

They are definitely back in the running for my next bike.

Any idea when the second update, allowing data on Wahoo cloud to push to Cyclo-Sphere, will be available?