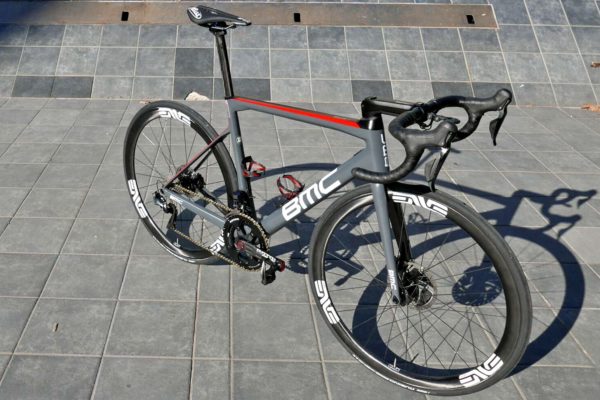 For several years we have seen Team Dimension Data riding Cervélo, but we got hints of change when they auctioned off their S5s raising money for Qhubeka. Now starting tomorrow with the new year, Dimension Data gets a new bike sponsor and will be riding a fleet of disc brake road bikes like the BMC Teammachines which debuted last year. ENVE remains a core sponsor, and shared a first look at Edvald Boasson Hagen’s new ride… 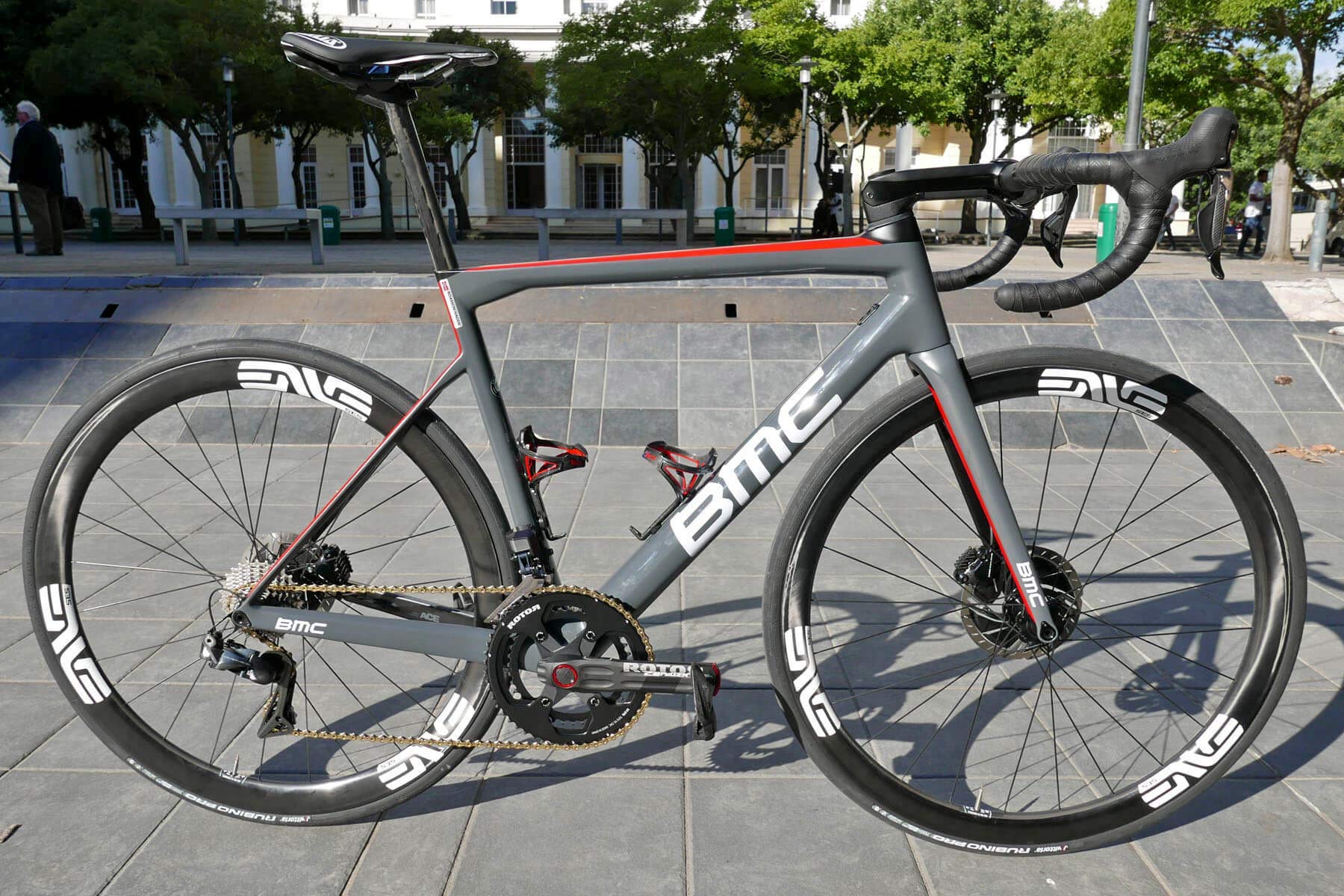 BMC pulled out of BMC Racing earlier this year, getting renamed & reorganized as the Polish outfit CCC who will now be racing on Giants. So the move to sponsor Dimension Data keeps BMC in the pro peloton.

Even with Dimension’s change of bike sponsor to BMC, much of the rest of the Teammachine SLR01 Disc team bike setup remains unchanged. The big deal though is that the team is now said to have fully adopted disc brakes. When we last caught up with Dimension Data in person at 2018’s Giro there wasn’t a disc brake to be found. Now it looks like stage racing, one day races and even time trials will be aboard disc brake BMCs in 2019. 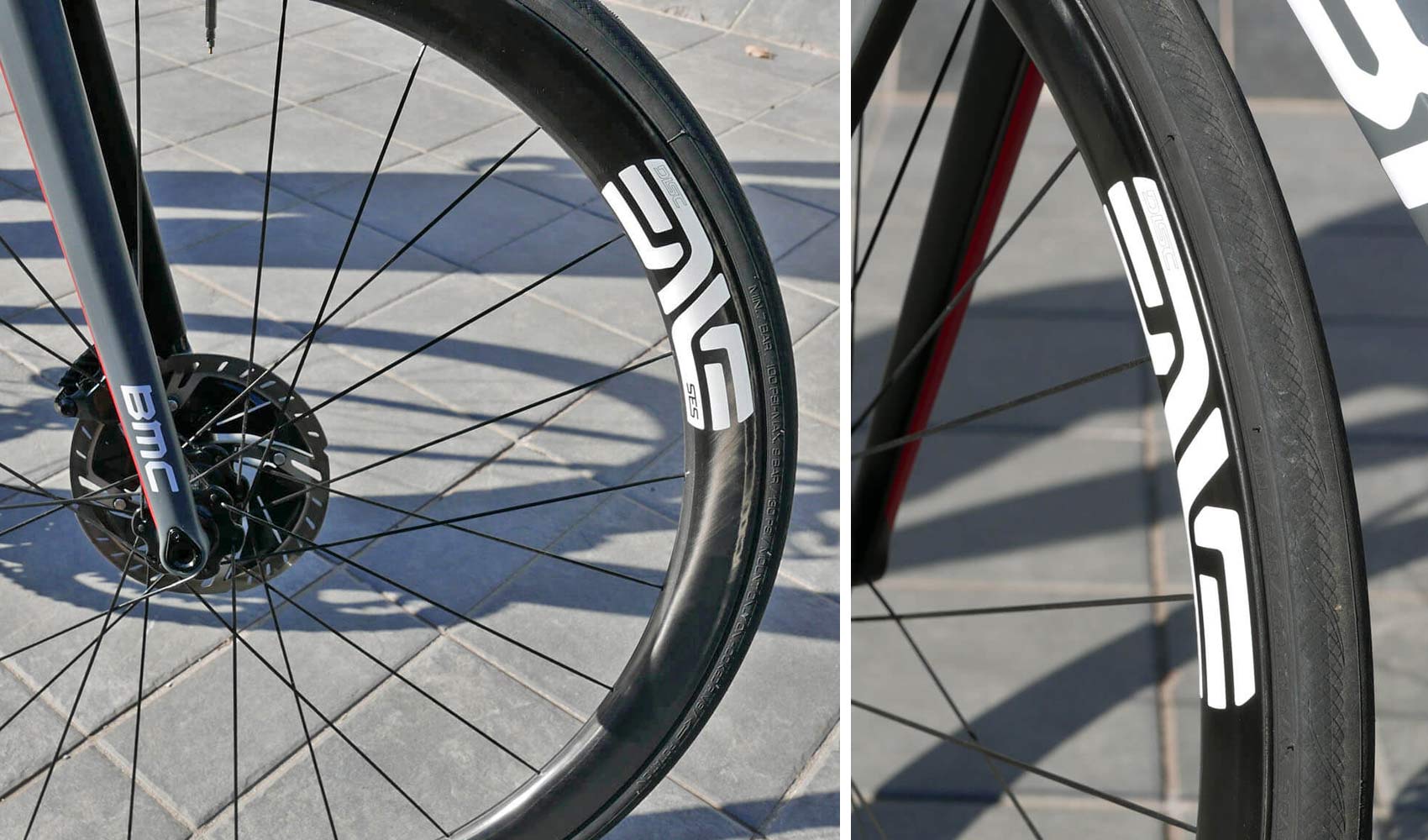 Of course moving away from rim brakes to discs is a big deal not only for the frame supplier, but also long-time wheel sponsor Enve. Lighter rims and a more aero transition from rim to tire are big benefits of the move to disc brakes according to Enve. That’s no big surprise as the Utah company has put a lot of optimization work into their carbon SES rims.

It also seems to be good motivation to at least train tubeless as well. Edvald Boasson Hagen has his Enve SES 3.4 Disc wheels set up tubeless here with 25mm Vittoria Rubino Pro training tires.  Interestingly, it also appears that Boasson Hagen’s wheels are spinning on a prototype set of Centerlock Enve Carbon Disc Brake Road Hubs, something Enve has not yet announced. 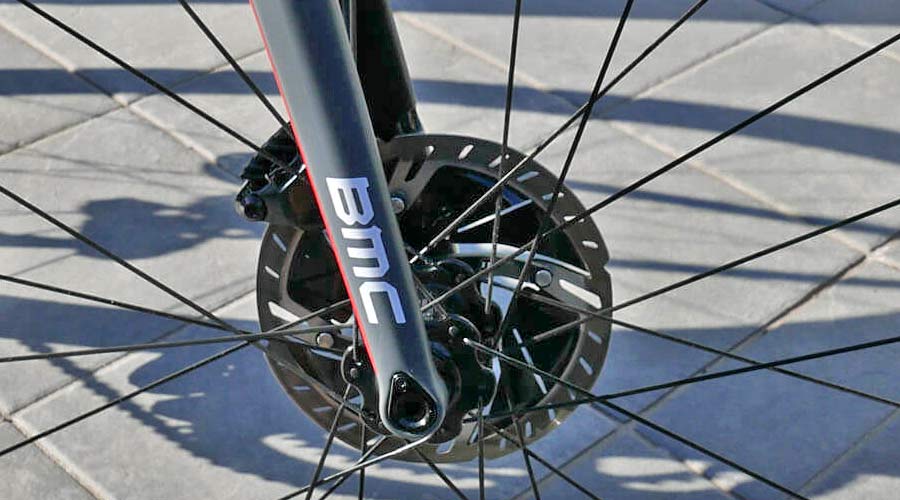 The front hub uses a multi-lobed flange configuration pairing spokes on both driveside and disc sides of the hub, like the newest rim brake Carbon Road Hubs use for the rear hub only. We only really get a glimpse of the rear hub which looks to use similar flanges. But both front & rear wheels use 24 spoke lacing. 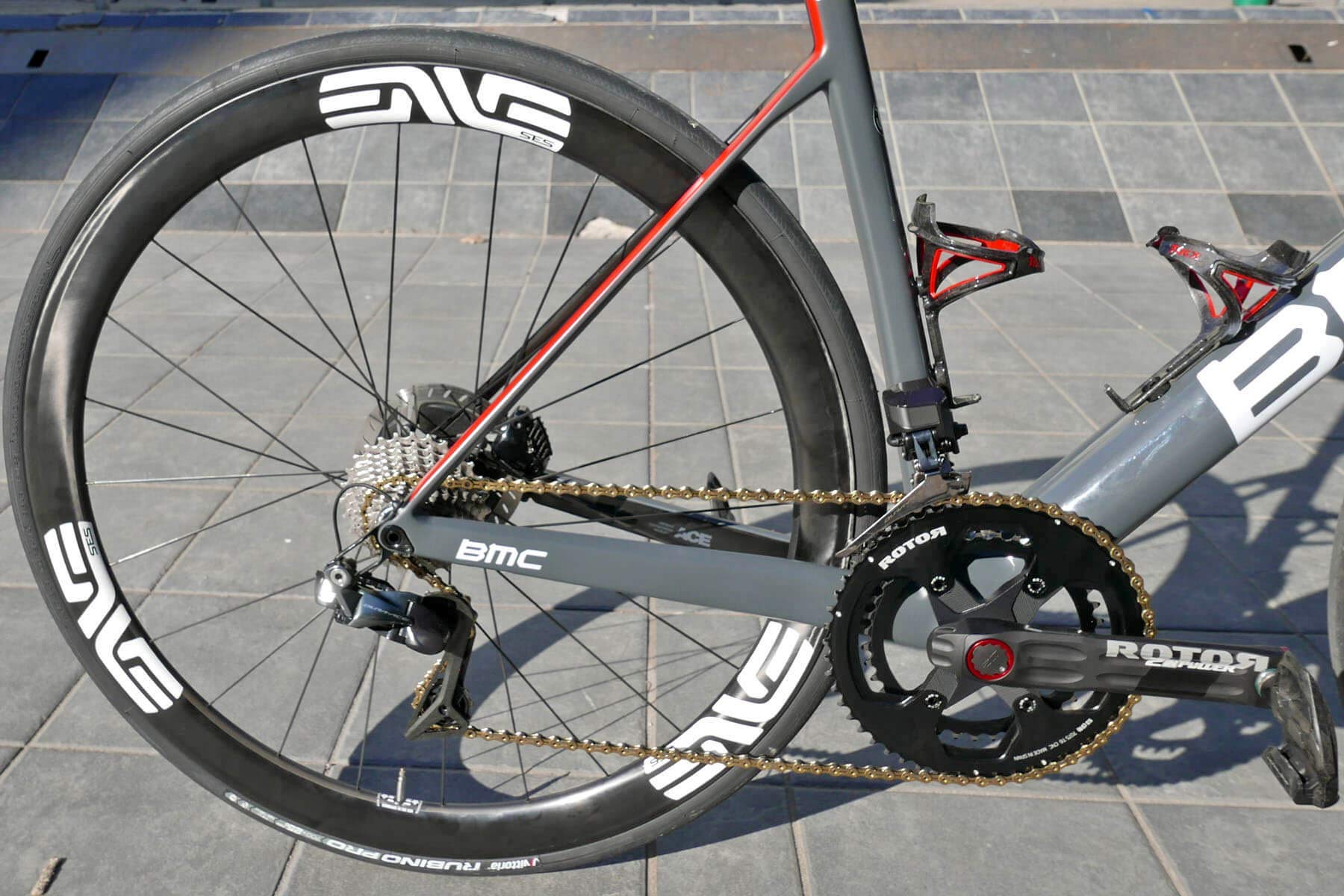 Drivetrain remains unchanged. Dimension Data continue to ride Shimano Dura-Ace Di2 (attached with a direct mount rear derailleur hanger), although now they move to the R9170 build that pairs hydraulic disc brakes to the electronic shifting. Rotor continues to provide 2InPower power meter cranksets, now in their latest modular spider versions which the team has set up with four-bolt, round NoQ chainrings, plus a set of Dura-Ace pedals. And everything is connected by a shiny gold ti-nitride KMC X11SL chain, which has been around for closing in on a decade now! 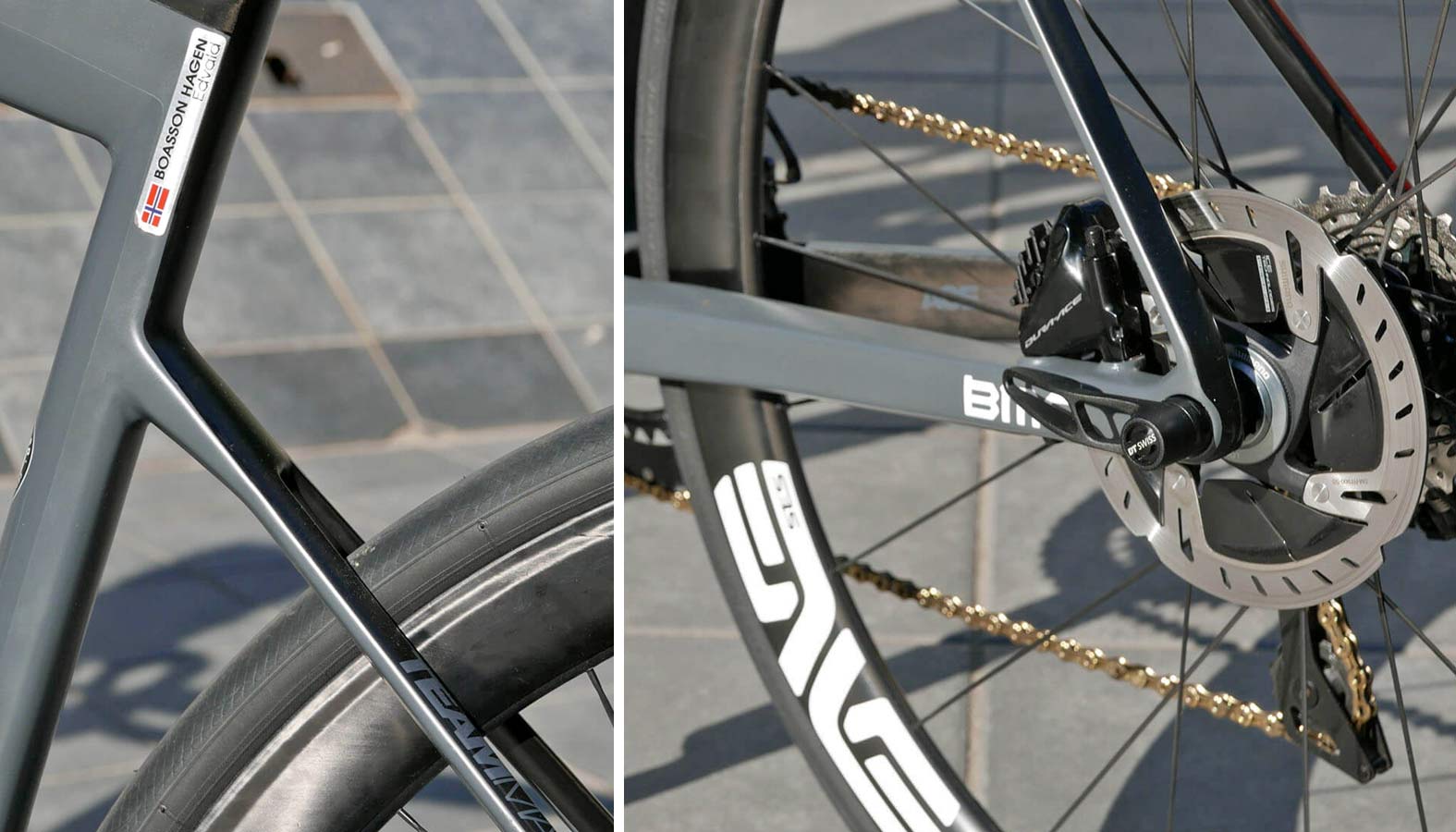 A little name badge decal on the seattube lets us know who is riding on this Teammachine. And even though there are no DT hubs on this bike, the DT RWS thru-axle is still hard to beat for a reliable, easy-to-use way to keep those fancy prototype Enve wheels in place, with a lever that can be positioned for the least aero drag. 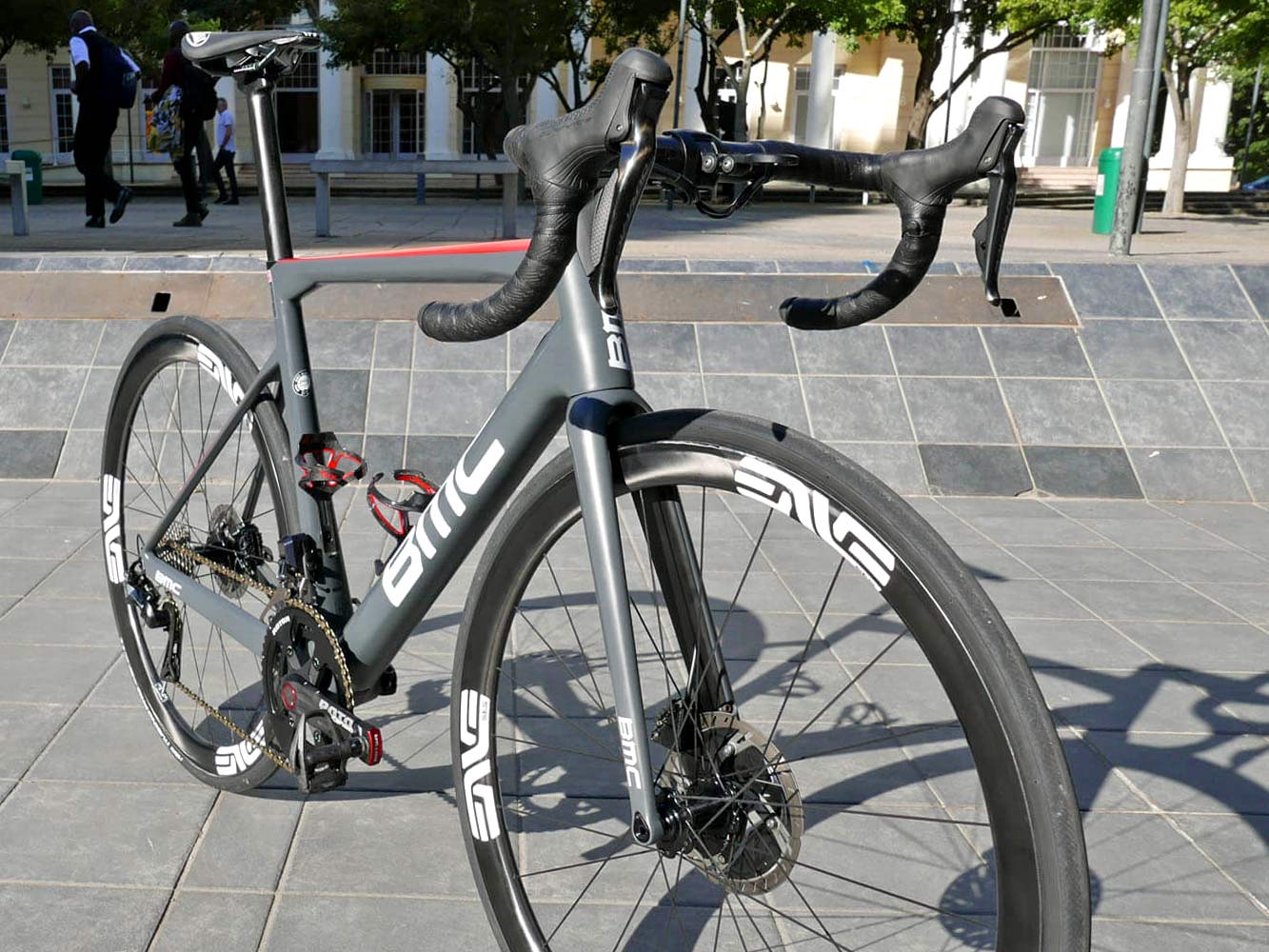 For now Boasson Hagen’s team bike looks to feature an almost stock race grey paint job, albeit with higher visibility white logos. We’ll have to wait and see the team’s new kit design in the new year and whether (when) custom team paint will show up too.

The Teammachine uses its own D-shaped carbon seatpost & special two-piece semi-integrated stem for hidden cable routing. Stock versions of the ICS 01 Integrated Cockpit Design stem only go up to 120mm, but it looks like Boasson Hagen gets a much longer one here. He’s also sporting the BMC integrated GPS mount off the stem faceplate. Thanks to a standard 31.8 clamp, Enve still provides their standard carbon compact road bar for the team, and a Selle Italia SP-01 saddle tops it all off.

B O R I N G!!!! They can paint the bike any color, pattern, anything they want, and this is what they choose to push out to the public!! Where are the paint jobs of the 80’s and 90’s??

BMC paint schemes are always bad. Too bad …because the frame is gorgeous.

Room for 28-30mm tires? That would be smart for the Cobbled classics.

Rotor still a key sponsor? looks that way. If so, Would REALLY love to see the team on 1×13 this year… it’s about time Rotor gets something out of this sponsorship! (first, Rotor needs to toss Uno into trash bin and go all in on 1×13)

Because 1x worked so well for another team last year…

For 1x to work for professional cycling, I think it will need to be a cassette that provides the full range of needed gearing with a 53T chain ring, because with a smaller chain ring, the appropriate ratios for the speeds they ride most days keeps them in the smallest cogs on the cassette, which create larger gaps between ratios and are inefficient. I don’t see professionals accepting that.

So they’re fully committed to discs for Paris Roubaix? I’m a fan of discs for road but cant imagine their braking performance is going to outweigh their complications in wheel changes (especially regarding neutral service) which plays a larger role in the classics .

Change the entire bike rather than changing wheel when you get flat seems to be the way forward, i guess.
Multiple thru-axle standard, disc spacing, and soon, cassettes for 11/12/13 speeds make neutral spare a lot more complicated.

Yeah but what happens when the team leader punctures deep in a cobbled section and the team car is 80 riders back or not allowed to head into that section I guess team mates bike or Mavic neutral service bike? Neutral service complications are a non issue for amateur racers (seriously the spare wheel car is only there so that you can ride back to the start and get some endurance miles on the day, they sparingly let you draft and very few of the people can actually get back if the race is on). I wonder as discs become more prevalent how neutral is going to adapt.

The just-slightly older BMC Teammachine in size 47 are horrendous. They pair low rake fork (41.6mm) with very slack 70.5 degree head tube angle. Creating a whopping 76mm trail value. It is far slower handling than any other sizes and actually the slackest handling of any bike raced in modern peloton. Yes, there are other brands with 70.5 degree head tube angle on tiny sizes, but those generally pair with more fork offset to compensate. I’m not saying Ritchie Porte’s struggle in fast down hill descend was because of the BMC Teammachine size 47 is incapable. I just think that small riders shouldn’t have to endure this simply because it’s the easiest way scale bike down to small size. They deserve a bike that handle like any other bikes.

BMC is capable of doing some really distinctive technical Industrial Design, and at the same time really clunky design.

@nobrand … care to be more specific? I can’t see anything clunky about the slr01 disc. That said BMC do tend to choose awful paint schemes. Their stock paint jobs are awful.