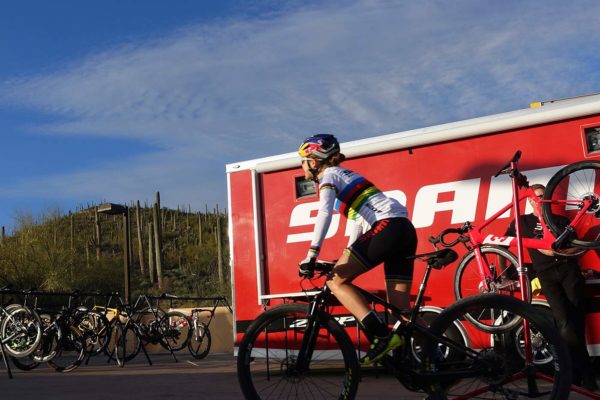 After taking home top honors last year, the Scott-SRAM Racing team looks like it may well be unstoppable for 2019. That’s because World Cup champ Nino Schurter is joined by last year’s women’s champ, Kate Courtney, now riding together. For her part, Kate told us she made the switch because, as the youngest female champion, she admittedly still has a lot to learn about staying on top of her game year after year. And who better to teach her than an athlete and a team that consistently tops the podium in XC and Marathon races around the world. We had a chance to check out both of their new bikes (and some hacks to an old one) at the recent SRAM Eagle AXS launch. Here’s what we saw… 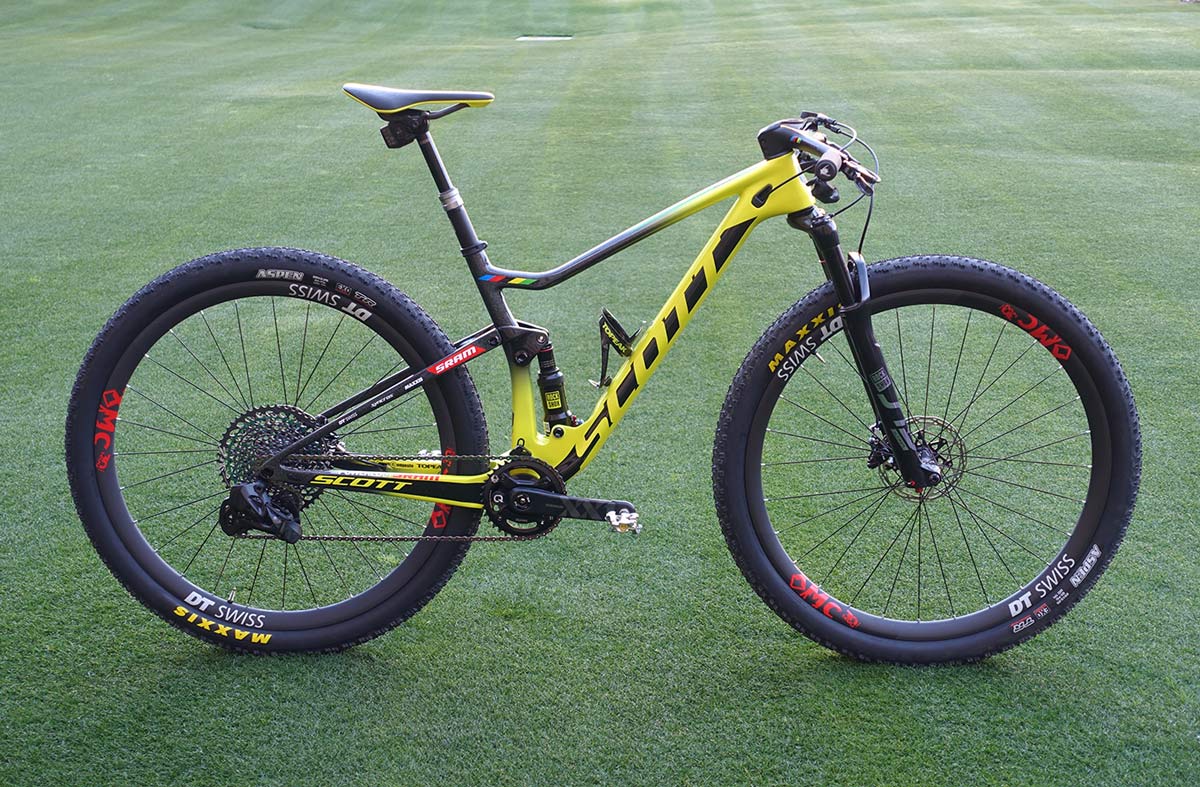 At the base is the carry-over Scott Spark RC full suspension frame, with 100mm travel. We covered a lot about this bike and his WC-winning build last fall, so check that out for background. Here, we’ll focus on what’s new for the 2019 season. 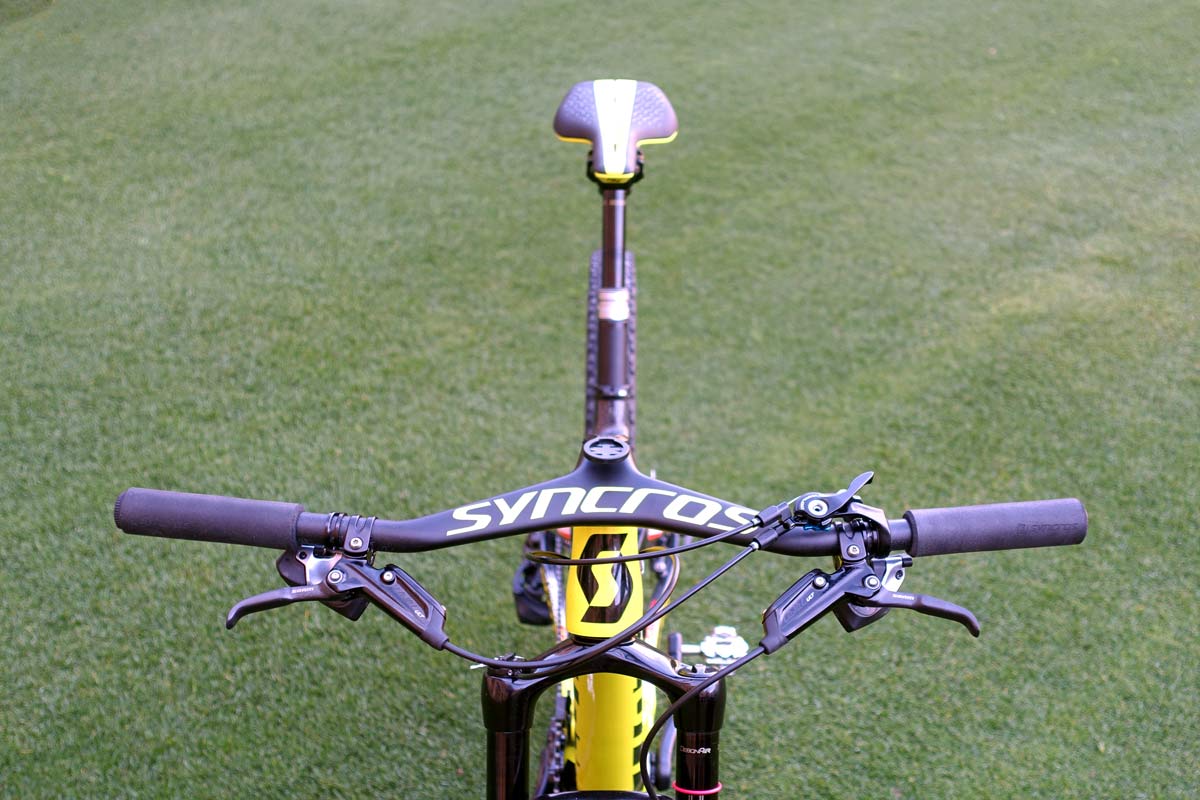 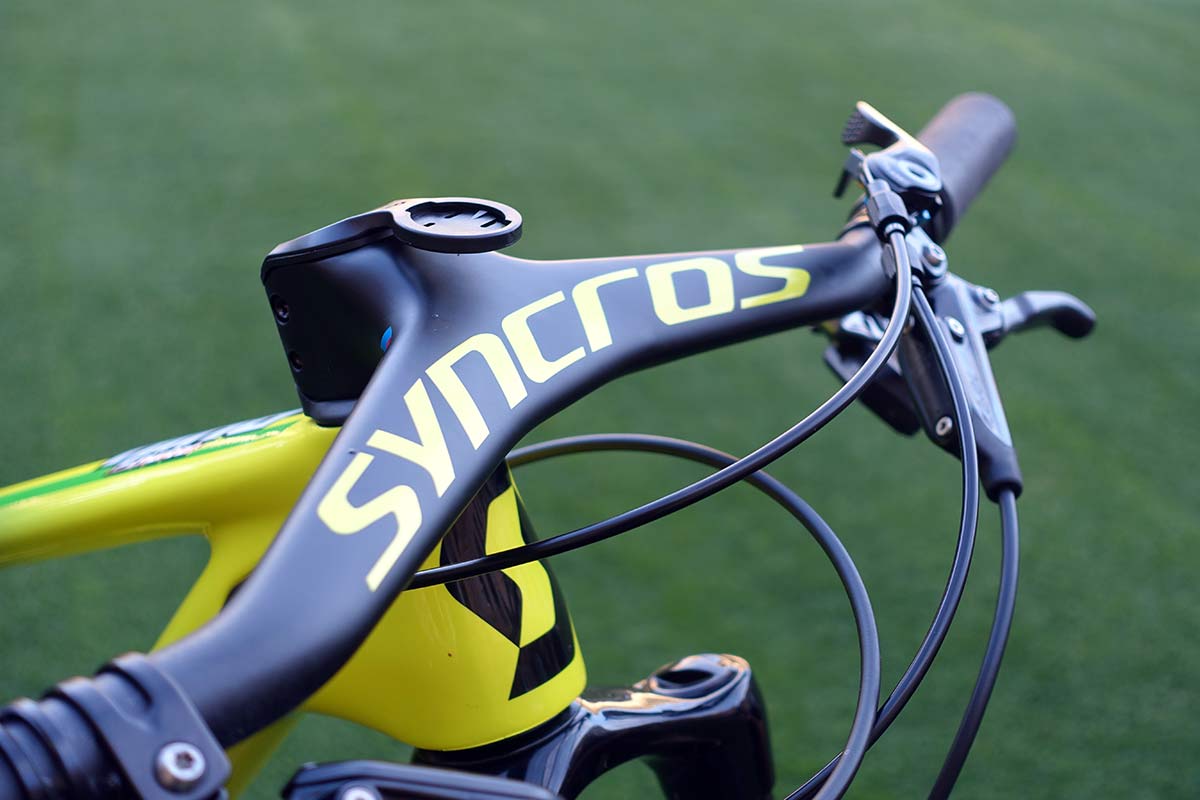 Up front is his custom Syncros Fraser iC SL bar/stem combo. UPDATE: This unit is offered for sale in this particular length and drop combo favored by Nino, but in more limited quantities than the standard version. Here’s the specs: 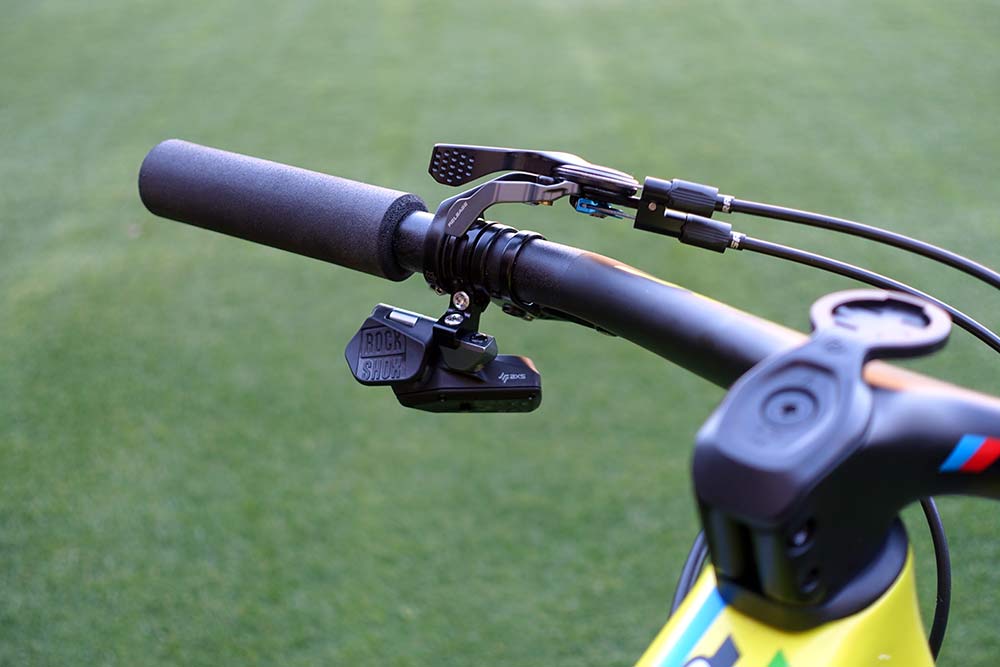 The addition of the Reverb’s dropper remote means the latest Twinloc suspension lockout remote was moved to the top of the bar. It’s not the most ergonomic placement, so it goes back under the bar for race days when he’s not using a dropper. 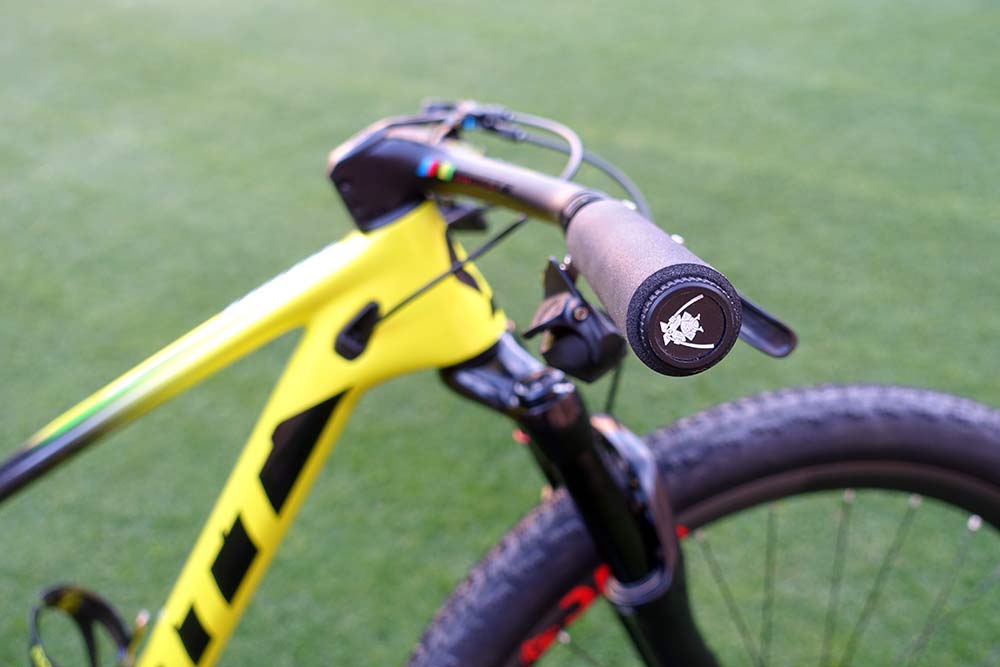 The Twinloc remote operates both the fork and the rear shock, both of which appear to be new. While SRAM was mum on the fork and there’s little on the outside to say what is new, we hear there are at least running updates on the way. This fork was actually a placeholder for a custom paint matched version that was showing up right after we left camp, so you’ll see a bright yellow fork when he toes the line. 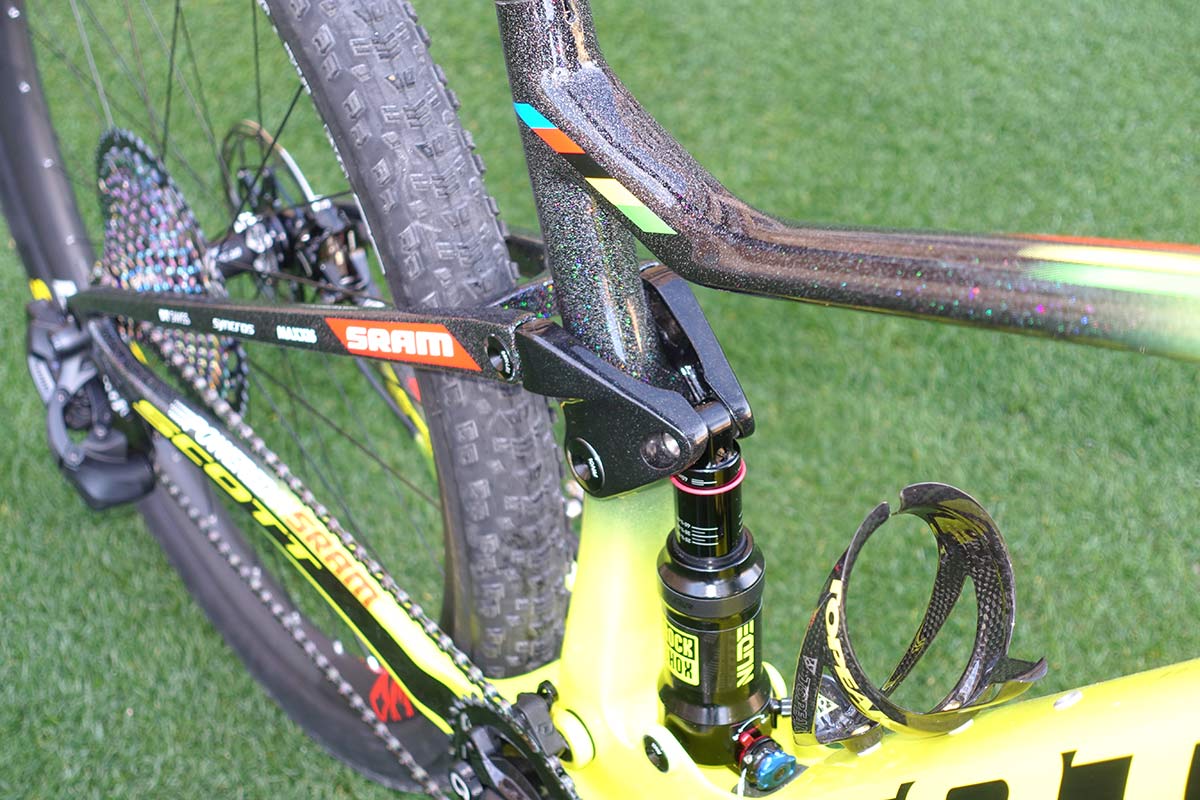 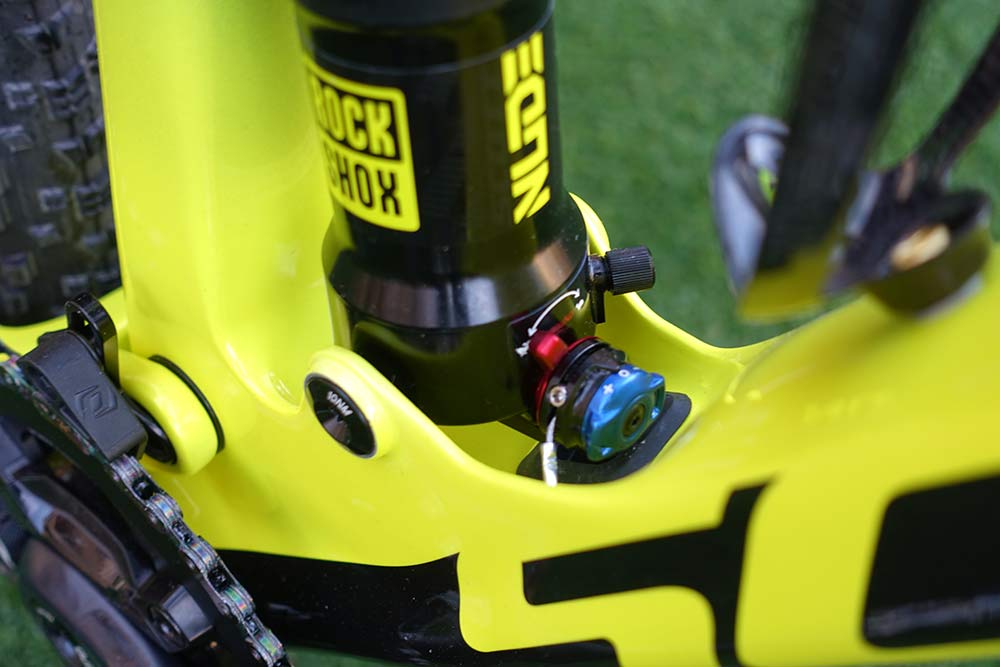 The rear shock, however, we can tell a few things about. That unmarked Fox Float DPS shock that was being used on last year’s race bikes is now a proper Rockshox Deluxe with what must be a new trunnion mount size for Scott’s bikes. Note the large DebonAir high volume can design, too, along with what seems to be separately adjustable compression settings for at least one of the suspension modes. 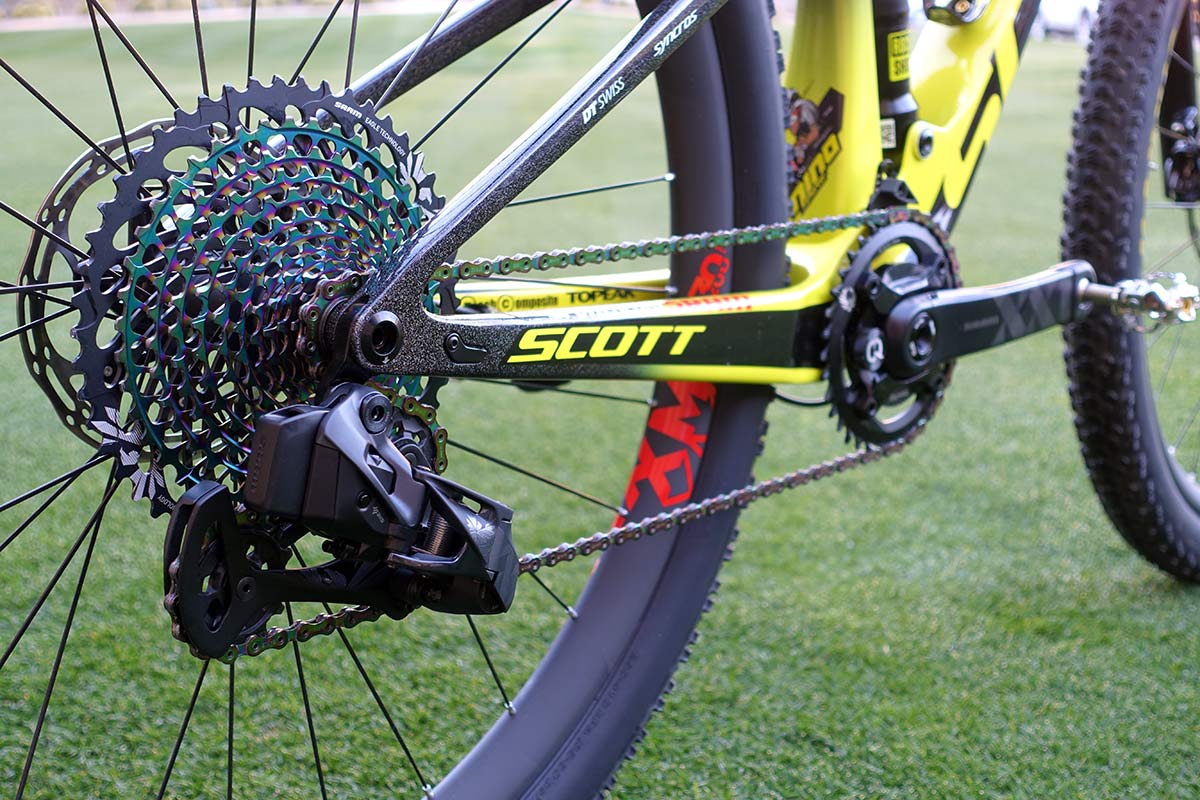 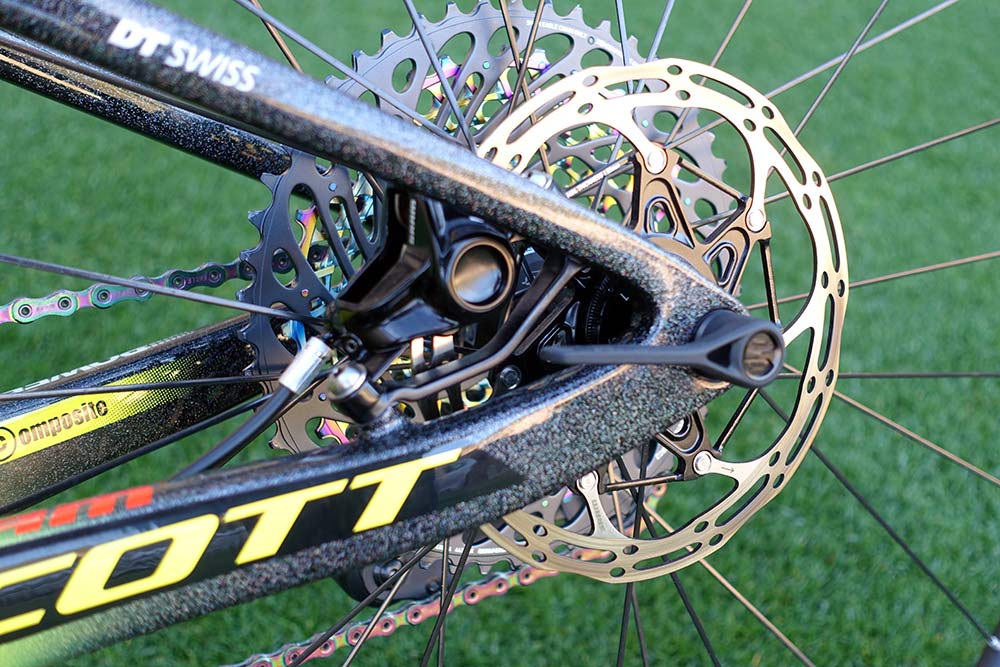 If the sun’s out on race day, look for Nino’s bike to shimmer brilliantly. We hit it with the flash and it really sparkles! Note the nice port cover hiding the rear shift cable hole, unused thanks to the new Eagle AXS wireless group. 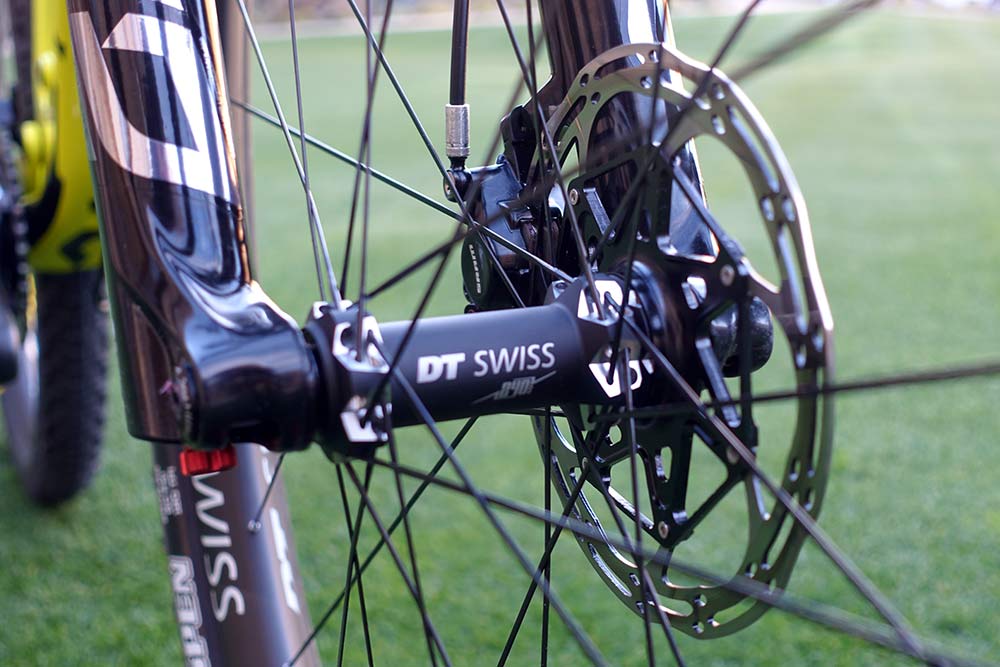 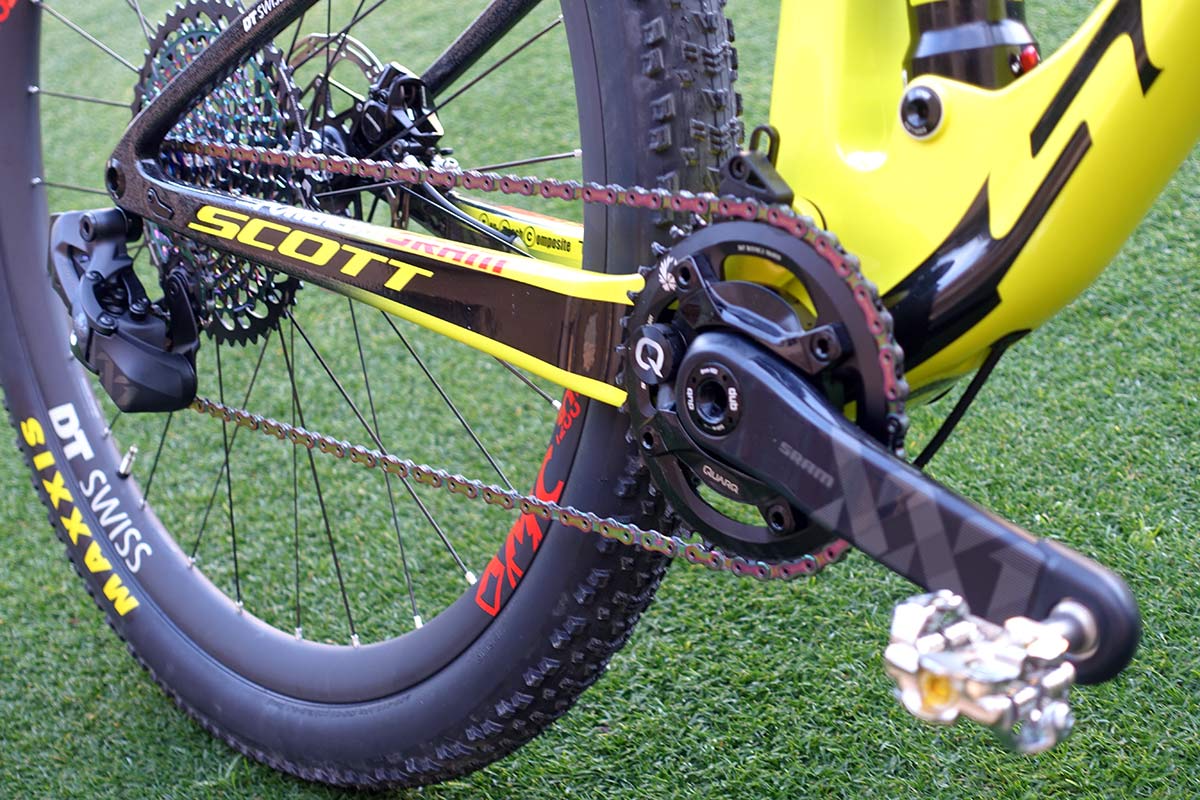 He trains with a Quarq power meter, but it comes off for race day to save grams. 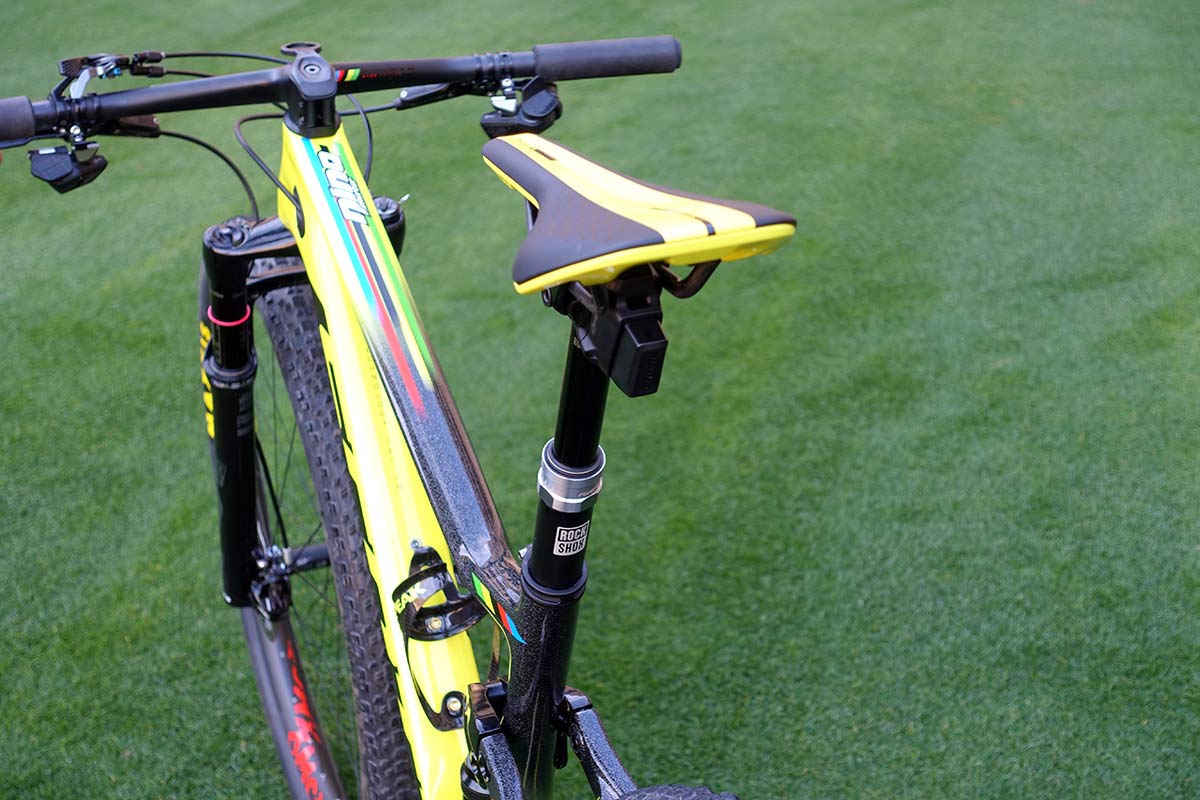 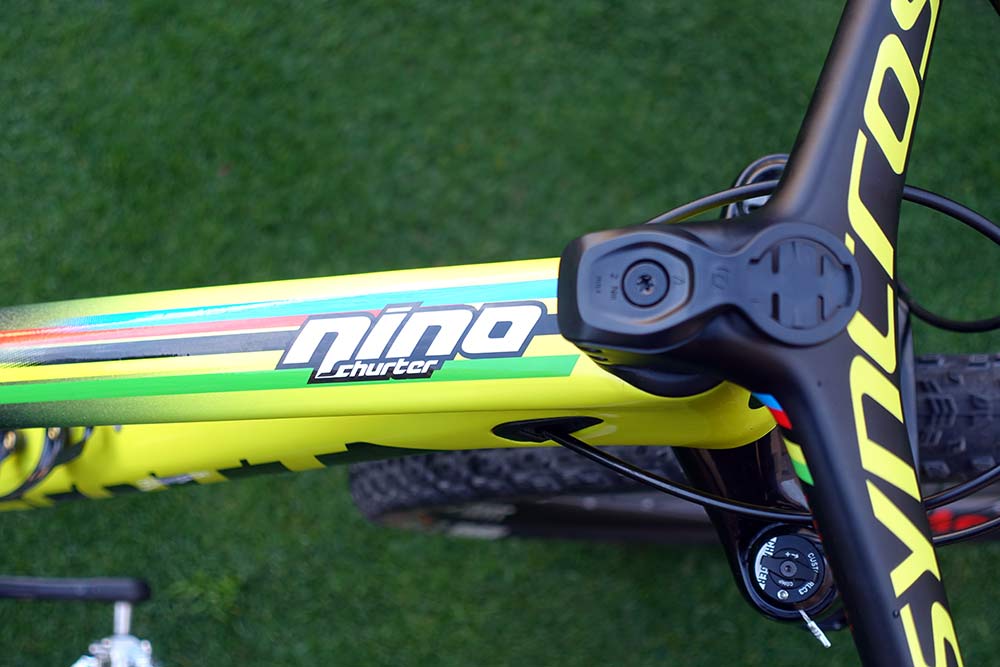 Huge thanks to the team handlers for helping us get the bikes for a few minutes before the team training ride! 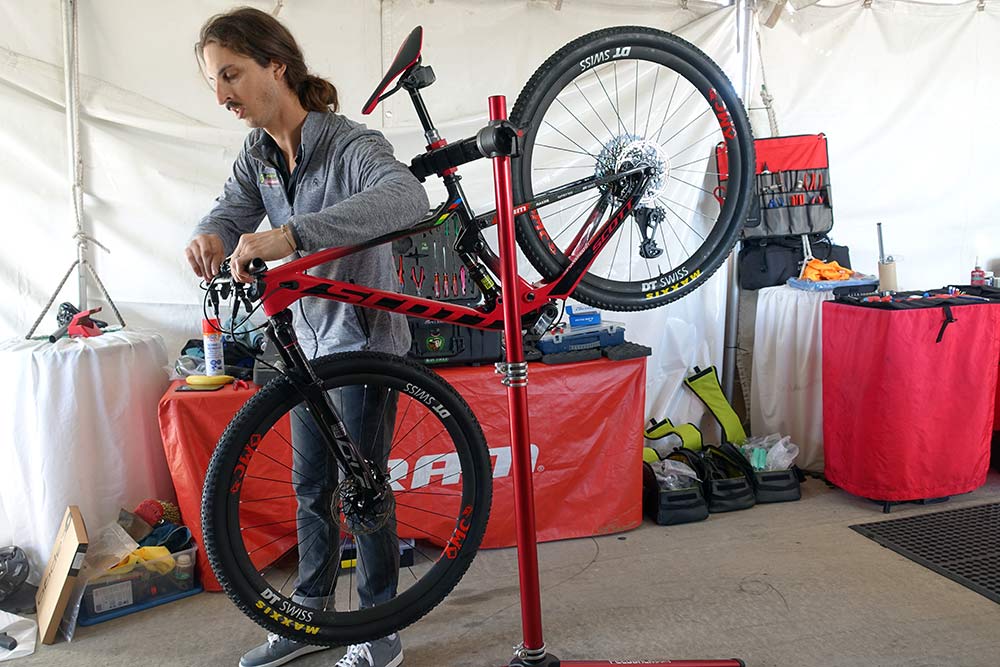 Kate Courtney’s bikes get a red and black paint scheme, but most of the same equipment. Like Nino’s builds, some parts will be swapped on or off (like a dropper post) depending on the course. Her mechanic, Brad Copeland, followed her over from Specialized and is shown above putting the finishing touches on her new Spark RC’s cockpit. 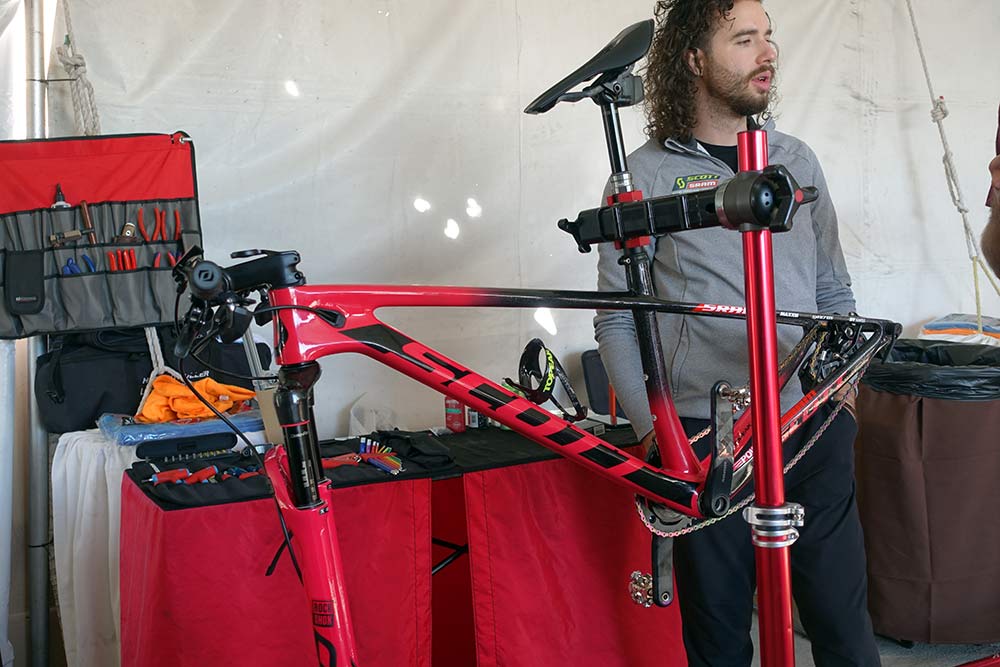 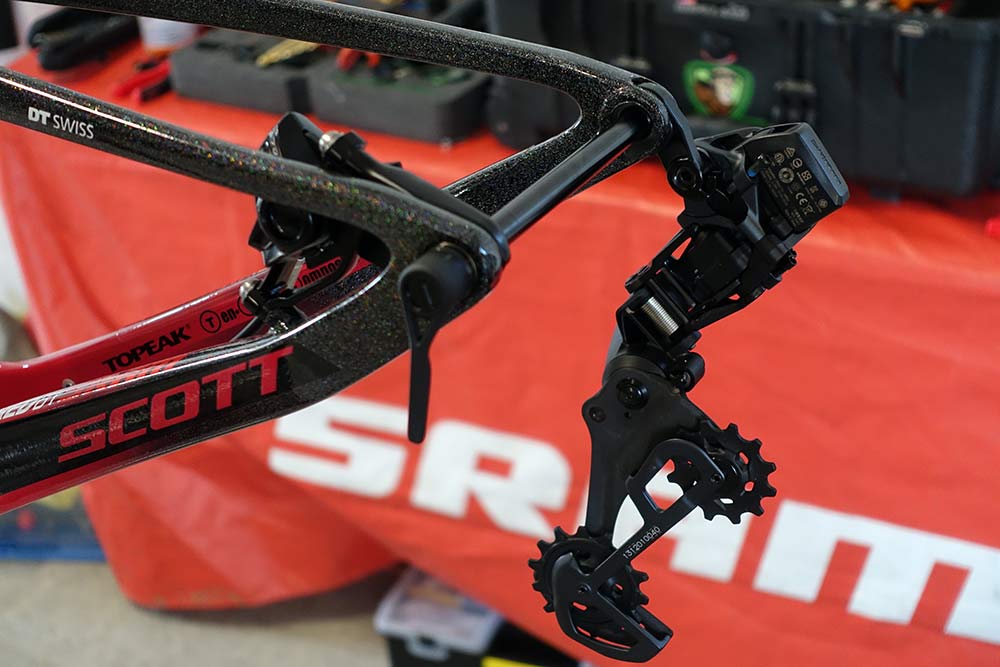 Both bikes are starting off with the new SRAM Eagle AXS group and Reverb AXS. Sparkly paint here, too.

She’s running a more traditional bar and stem on the hardtail, but going with a stock version of the Syncros one-piece bar/stem on the full suspension bike. Ritchey pedals have long been aboard the Swiss team’s bikes. Other bits include a Topeak bottle cage… 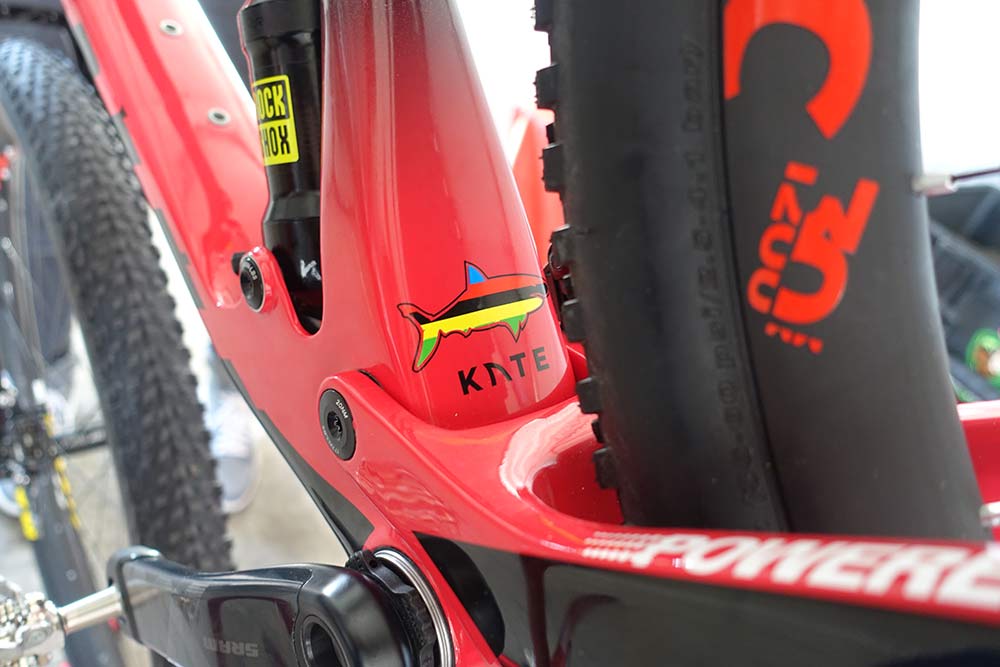 When you go pro, you need a cool logo for your name. Because then you can get stickers made. And fans love stickers. 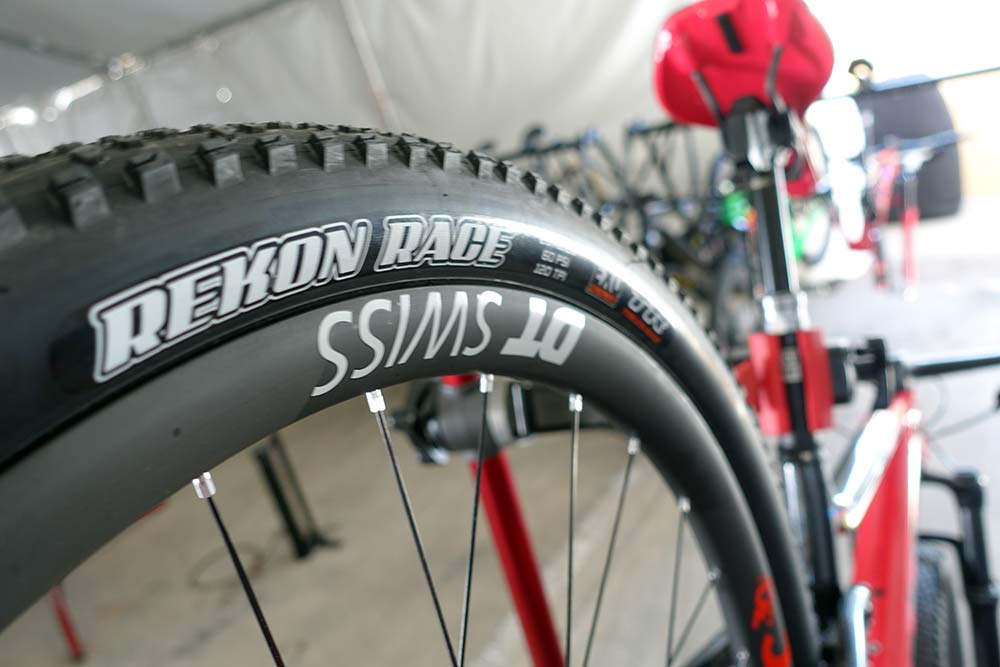 Kate was running the slightly more aggressive Rekon Race for the training days out in Tucson. Curious why they were there? Or where they rode? Check out our Where To Ride feature on that area and plan your own winter training camp…never know who you might run into!

Check out the team’s bio on Scott-Sports.com.

“Ritchey pedals have long been aboard the Swiss team’s bikes.”

That’s pretty much the only piece left from the time when the team rode Ritchey frames, cranks, bars, stems, bar ends, posts, rims, and even forks, right? I’m glad they’ve been able to maintain that small piece of historic connection over the years.

Oscar AM
Reply to  Ricco

Yes they are 30mm, Nino raced the last year in the XRC of 25mm and XMC of 30mm depending on course.

Forgive my lack of knowledge, but what is that bit of kit hanging below the back of the saddles on both bikes?

I’m guessing it is the wireless receiver for the dropper post.

those syncors bars are sexy af! how wide are they? they look narrow for some reason

According to their specs on Nino’s bike last year, they’re 680mm. They look unchanged this year.

“Slightly more aggressive Rekon Race” – this is incorrect, the Rekon Race is a semi slick and is basically the least aggressive tire in the maxxis lineup (if by aggressive you mean knobby. Nice article though, cool to see the trick kits on these bikes

Agree it’s interesting to see the builds here. I wonder about the weight consciousness and how they justify notably heavier options like the AXS reverb. Is it really *that* much better of a dropper than the comparable standard reverb or other posts that are lighter? Or is it just that they ride for SRAM and they are therefore required to ride whatever SRAM wants them to? Curious as I’m facing this dilemma on a new bike build right now actually. 🙂

Hi guys, can you know what kind of twinlock they are using when have the AXS dropper, is not the default model in spark, can´t mount overthe bar?