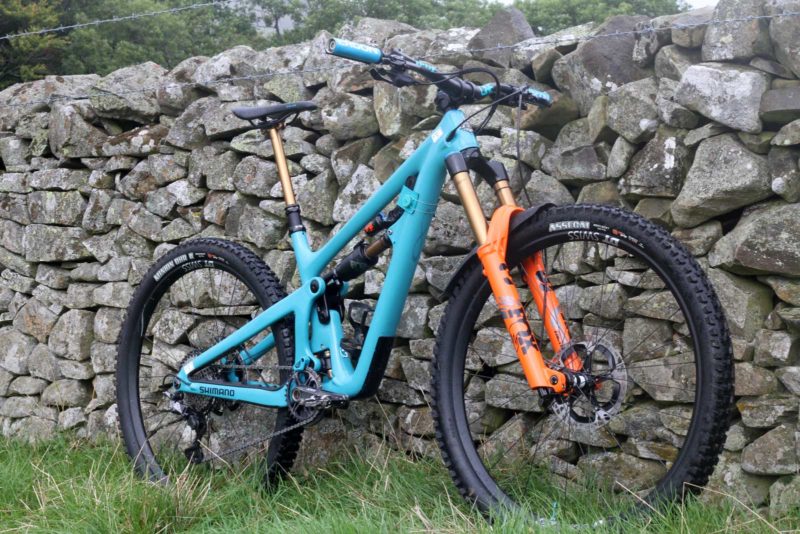 Heading into the final round of the 2021 Enduro World Series, the battle for the Overall Title was still very much raging between Yeti’s Richie Rude and Canyon’s Jack Moir with only 70 points separating the two. Sadly, fans didn’t get the ultimate season finale showdown they’d been hoping for, after Richie Rude was disqualified for riding outside the flags on the finish gantry during Saturday’s Pro Stage. Here’s a wee clip of that, courtesy of Matt Stuttard.

Yes, he rode within the tape but, the official rules of the EWS clearly state, “Gates can be used to clearly mark sections of the course that a rider must pass through. Missing a gate will be deemed as course cutting”. Prior to the incident, we got the low-down on Richie’s race day setup from his mechanic, Shaun Hughes. 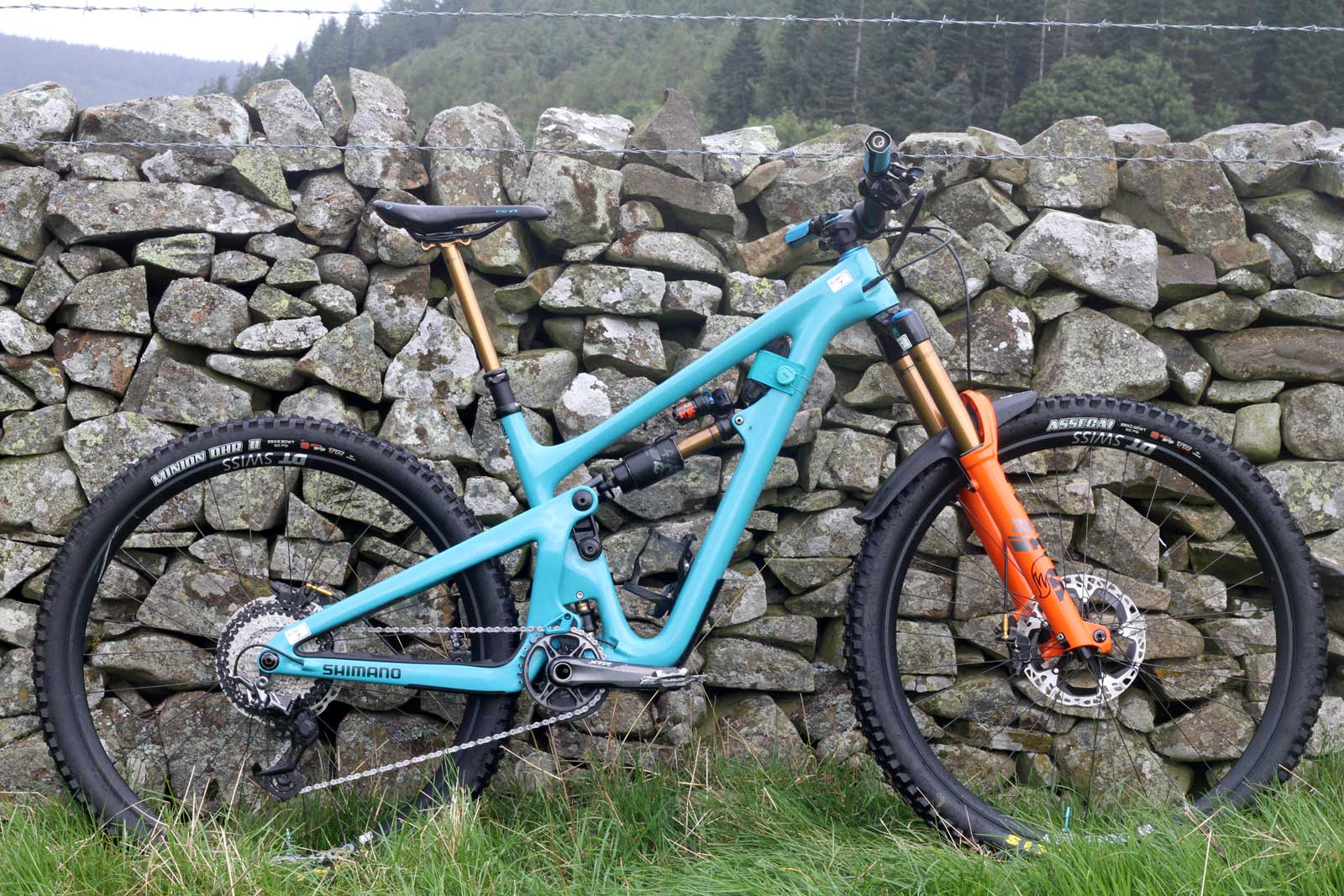 Richie Rude’s 182cm puts him on the border between the Medium and Large SB150, but he opts for the Medium frame, running a 29″ wheel front and rear with a 200mm FOX Transfer dropper. The frame is from Yeti’s TURQ series, referring not to the colorway but to the higher-end, lighter carbon fibre used in its construction. At the previous EWS round in Finale Ligure, Richie opted for a 180mm travel FOX 38, but dropped that back down to 170mm for the series finale in Scotland, taking the head angle back to its stock 64.5°. 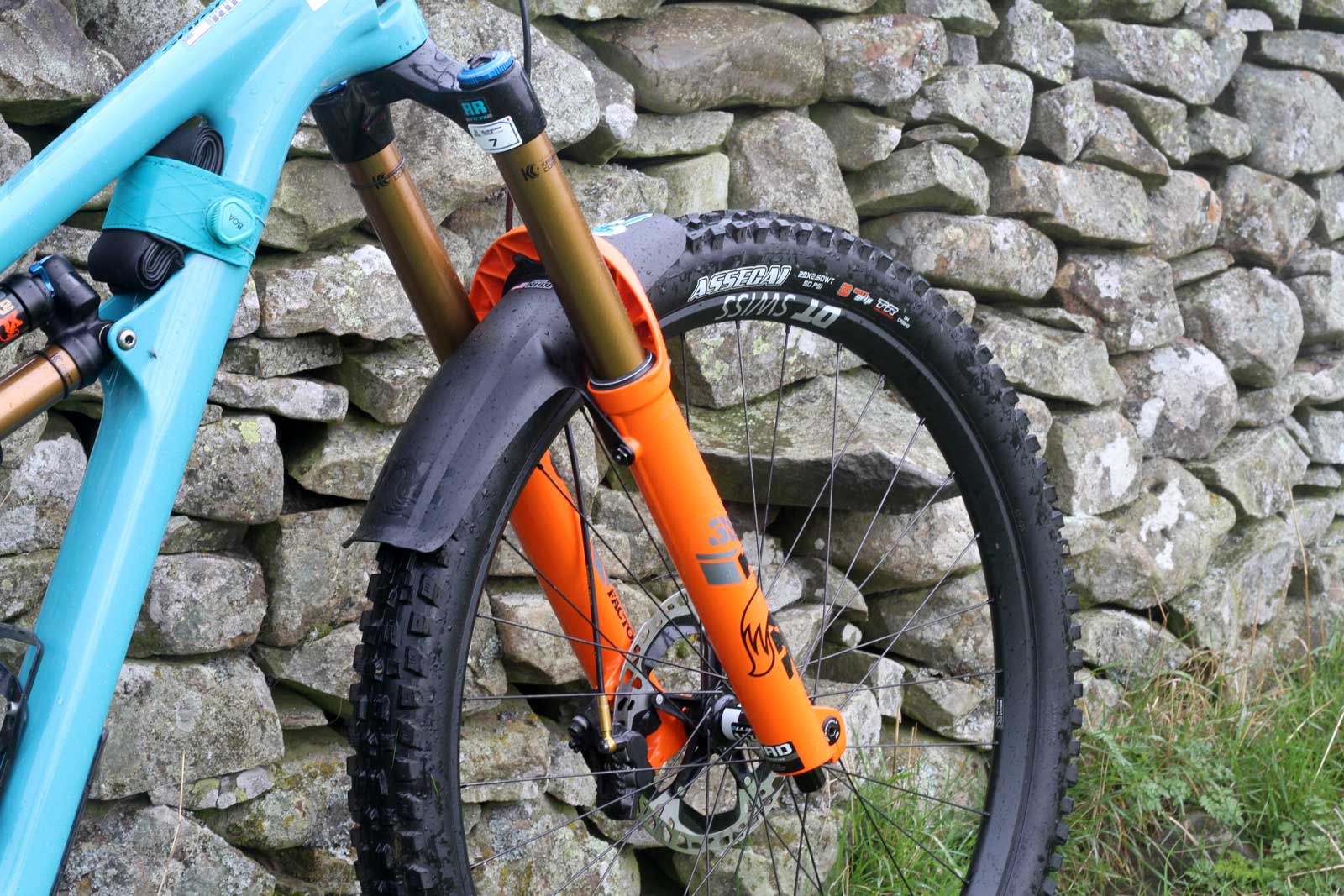 Richie FOX 38 fork was fitted with an as-of-yet unreleased bolt-on Fox fender. He uses an Occam Designs Apex BOA Strap to secure a spare tube to his frame, though this seems a little superfluous given that he runs CushCore Pro front and rear.

The GRIP2 damper is a little different to the stock cartridge; Shaun Hughes tells us the RAD prototype seen here sees a new shim stack arrangement, tailored to be softer off the top but to ramp up earlier. He also tells us that these RAD prototypes designed for the World’s top riders hardly ever make it to production, as they simply wouldn’t be appropriate for your average rider.

Richie’s Yeti gets 3 tokens in the FOX 38 fork with 115 PSI, with the compression damping settings “firmer than most”. 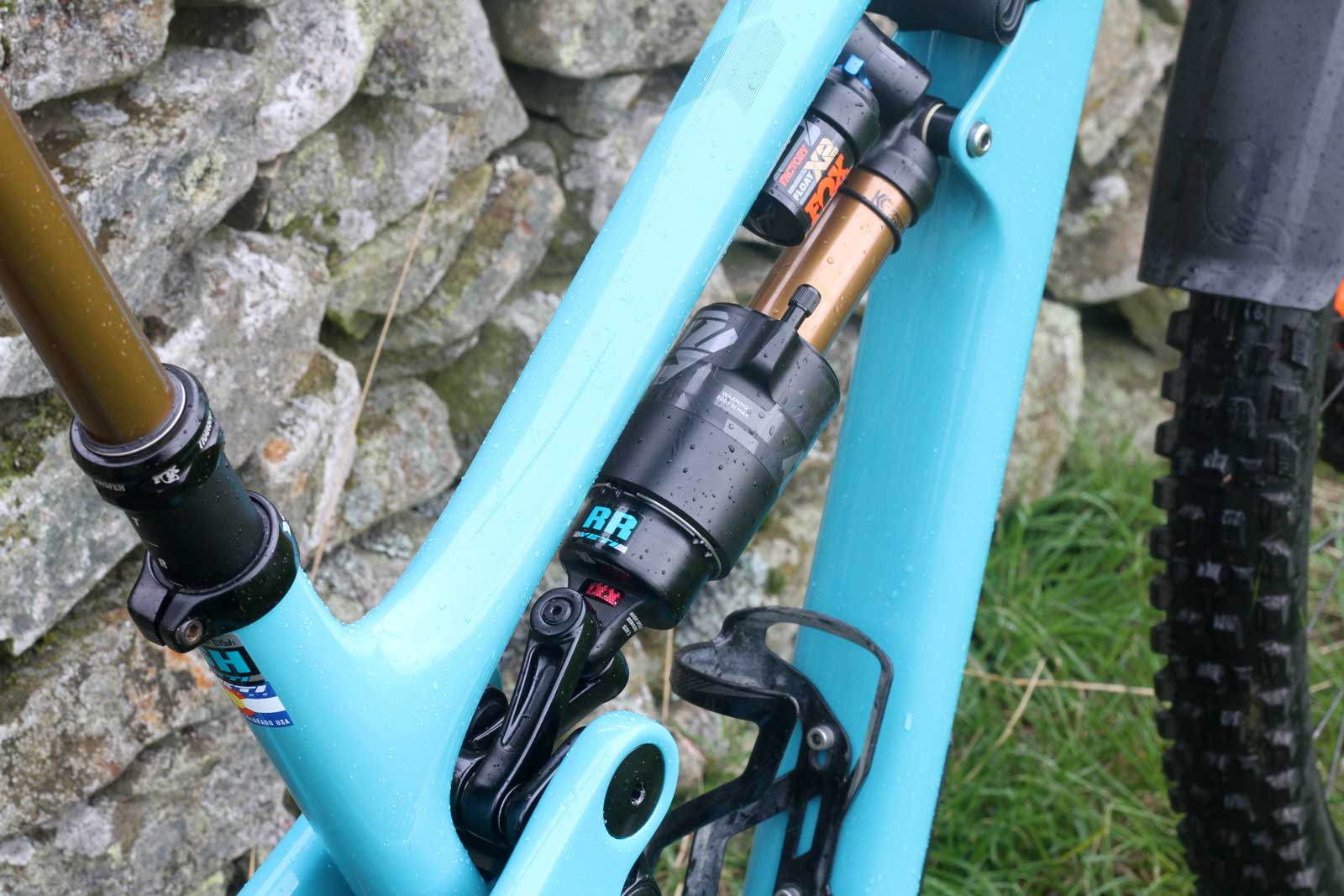 Supporting 150mm of rear wheel travel is a FOX X2 Air Shock, running 3 Token with pressure set to 220 PSI. Richie runs his rebound settings “quite fast”, with compression damping, again “firmer than most”. 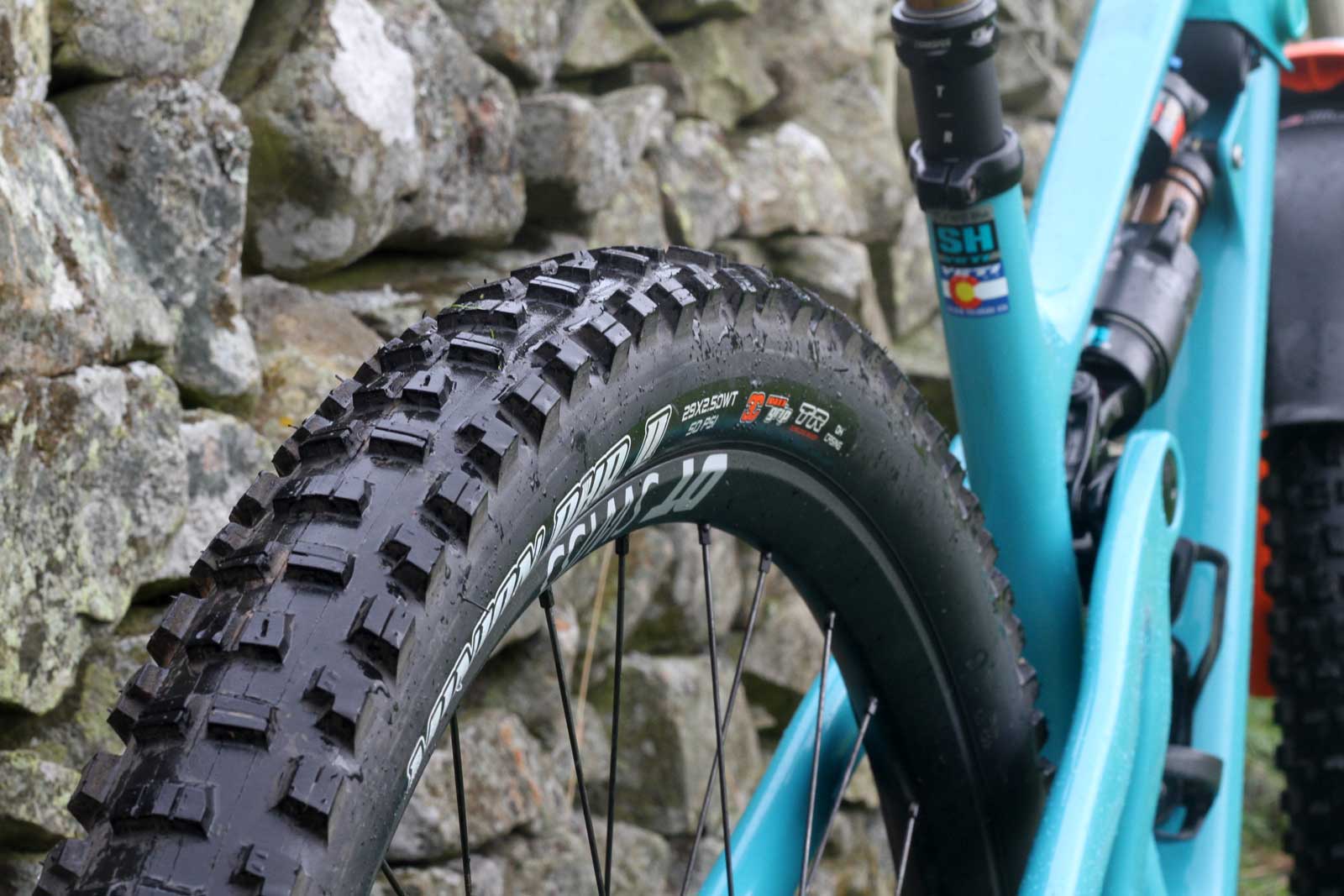 Richie Rude prefers the reliability and durability of aluminium rims, running a wheelset from DT SWISS rolling on their 350 hubset.

Though Richie’s bike is shown here with a Maxxis Assegai on the front, he switched that out for a Shorty on race day, more appropriate for the sloppy conditions riders were to face all weekend. In the rear, he opted for a Maxxis Minion DHRII, 2.5” downhill casing with the Maxx Grip compound. Test Pilot is the brand’s prototyping program; we’ve seen several of these this season, including on Bex Baraona’s Ibis Ripmo.

Leaving nothing to chance, Richie’s bike rocked CushCore Pro tire inserts front and rear. Richie’s mechanic Shaun tells us he normally runs pressures in the region of 25/26 PSI in the front and 26/27 PI in the rear, but that he would likely run them a little softer for the wet and muddy trails. 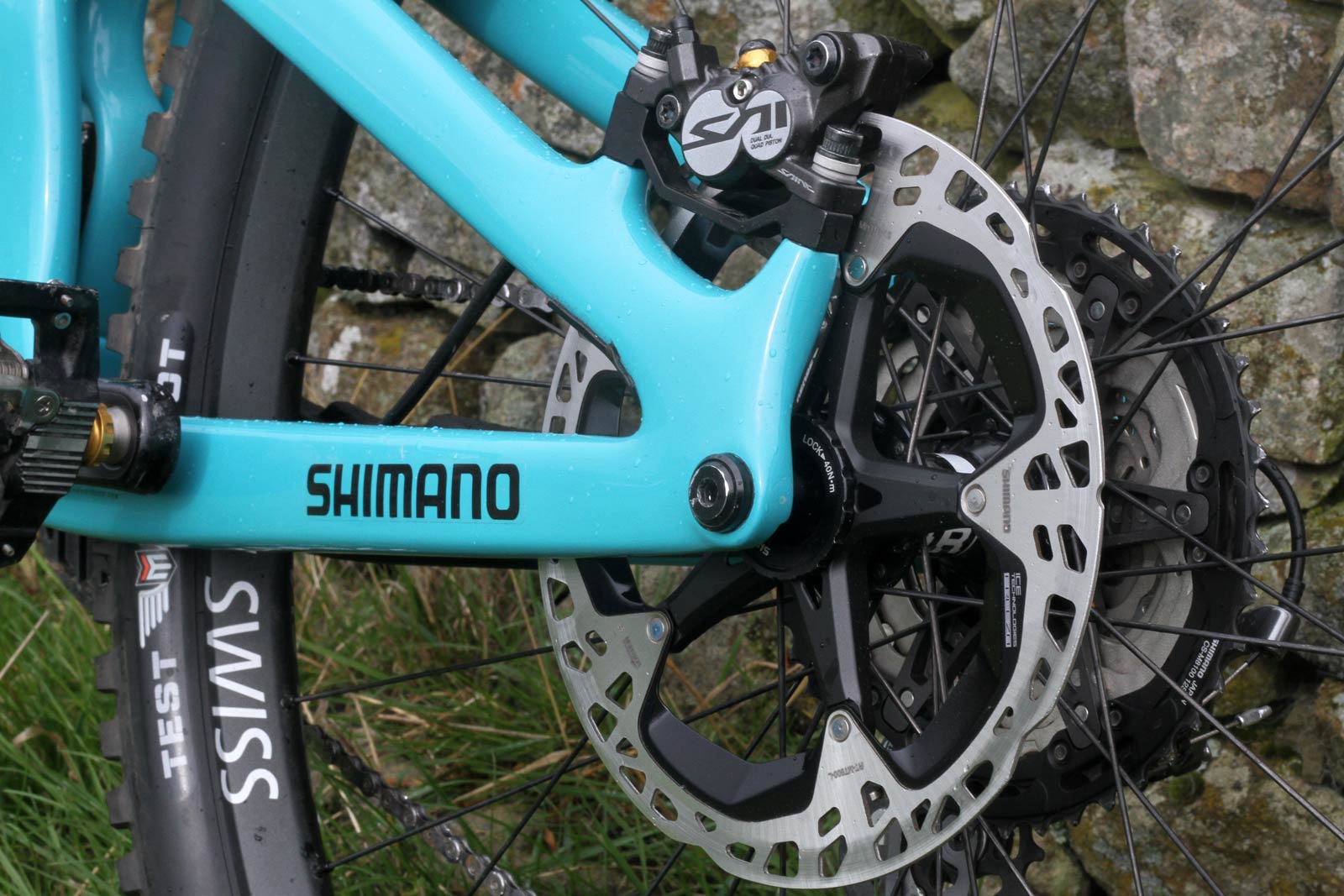 Shimano’s top-end downhill spec Saint brakes are paired with 203mm rotors front and rear. These are the Ice Technologies FREEZA rotors, designed to maximize heat dissipation with a three-layer construction and use of heat dissipating paint on the carrier. Richie runs centre-lock rotors of his SB150, though these have recently been made available in 6-bolt. 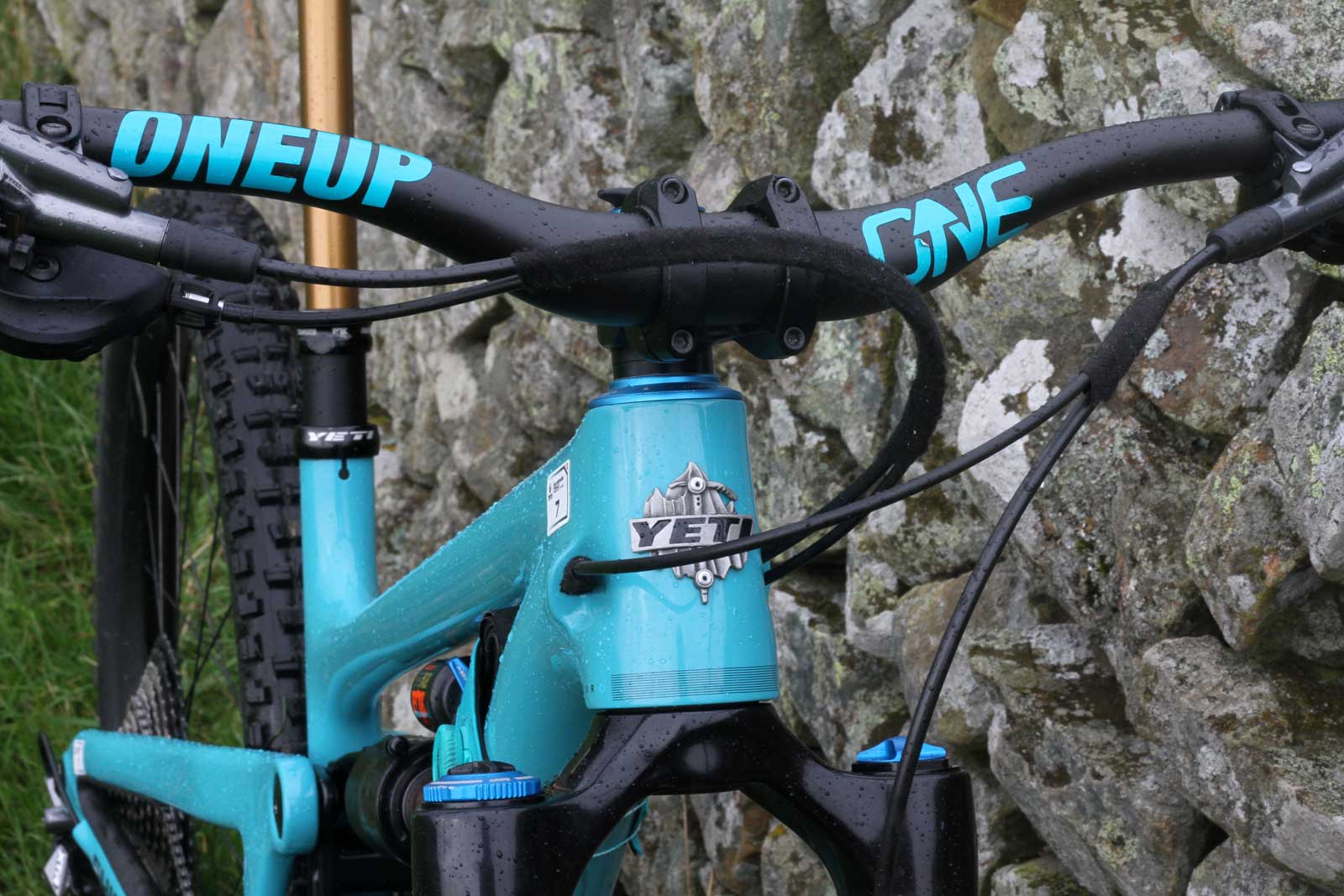 In the cockpit, Richie Rude runs a 50mm stem with a 35mm rise OneUp oval carbon bar, cut down to 755mm. Ergon-branded covers hide the grips from view. Housed within the stem and headset is the OneUp EDC V2 tool. 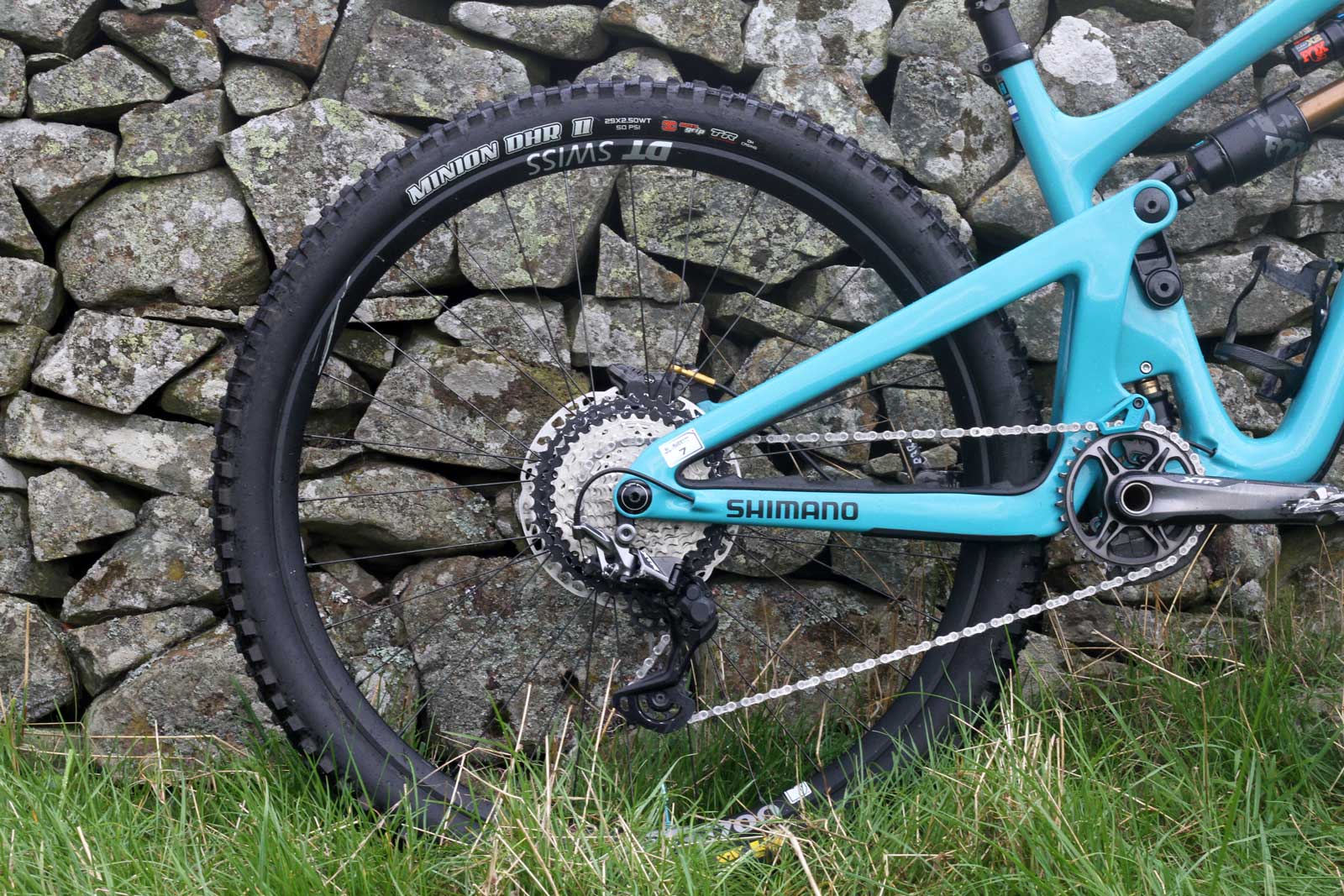 In the drivetrain department, we see 165mm Shimano XTR cranks with a 32T chainring, paired with a 10-45T cassette and an XTR GS (medium cage) rear mech – parts chosen for strength and reliability. A OneUp chain guide and bash guard help with chain retention.

XTR group, except for the XT cassette and XT chain.

What was that about the grips?

You guys are right, thanks! Updated now.