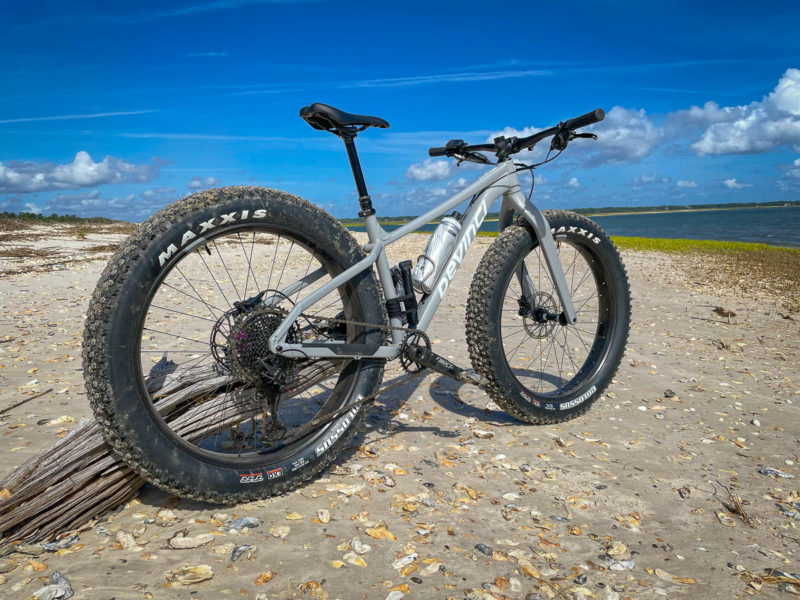 With aluminum frames that are made in Canada, Devinici can update their designs relatively easily. Last year, that meant their Minus fat bike got updated, modern geometry with the addition of an XL frame size. Just a year later, they’re updating the geometry again—this time to accommodate the addition of larger 27.5″ wheels and tires.

This is a trend that we’ve been seeing from several fat bike companies over the past few years with varied results. Initially, many fat bikes sold with 27.5″ wheels and tires were frames that were actually designed for 26″ wheels and tires, just with the bigger wheels crammed in. At the time, 27.5″ fat bike tires typically used shorter sidewalls, which allowed them to fit in these frames, but didn’t offer the same flotation we’ve come to appreciate from proper 26″ fat bike tires.

But now that tire manufacturers seem to have figured out how to build a properly large 27.5″ fat bike tire, and frame manufacturers like Devinci are building fat bikes specifically for the bigger tires, have we turned the corner on the bigger wheel trend?

To find out, Devinci set me up with one of the new Minus fat bikes. The catch? It needed to ship out to me ahead of the launch—at a time where snow simply wasn’t in the forecast. So I did what I usually do. I took the Minus down to the beach, where the temperatures were decidedly positive. But the varied terrain and loose sand gave me the best impression of the fat bike that I could hope for, short of deep winter testing. 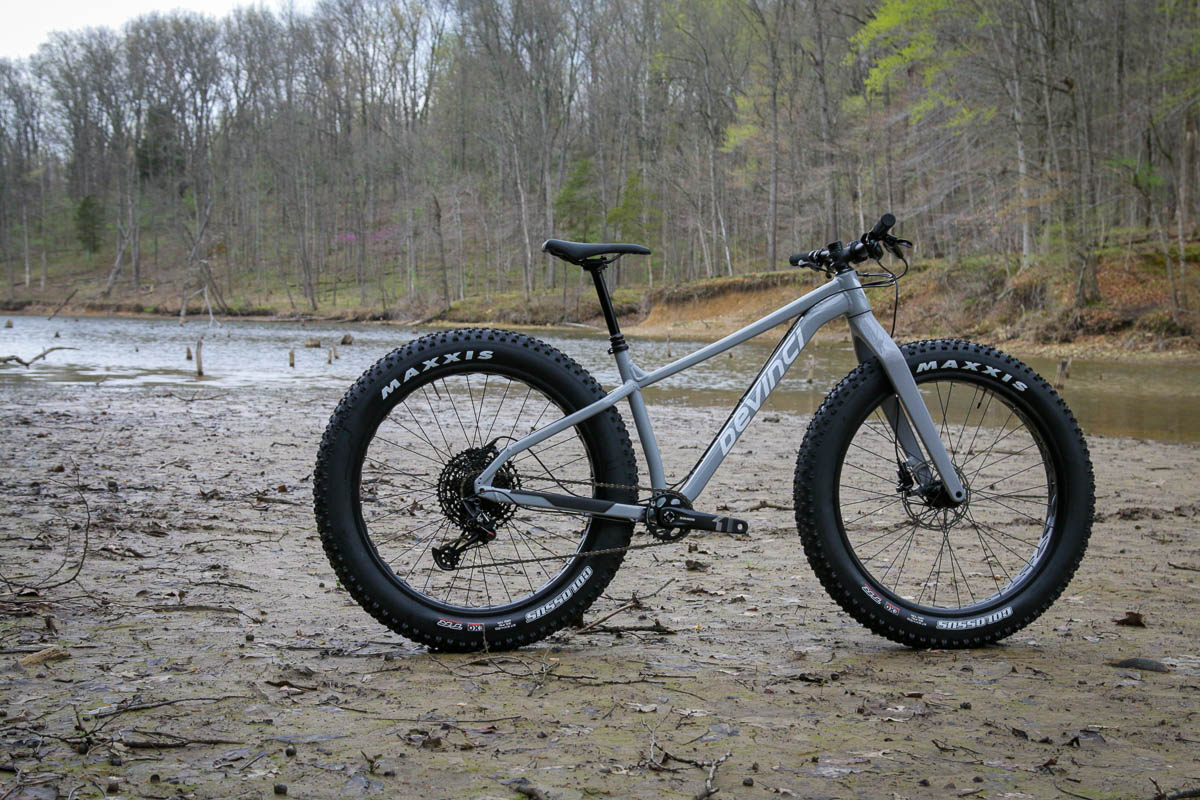 Fat bikes are definitely not dead. But the market has seen a correction over the past few years. There was a point where every company felt they needed to produce a fat bike, which led to a lot of really bad fat bikes made by people who didn’t understand them. For those that do understand them, like Devinici, they’re still around making great bikes. However, Devinici knows that for many riders, a fat bike will be a second or third bike, so it needs to be affordable. 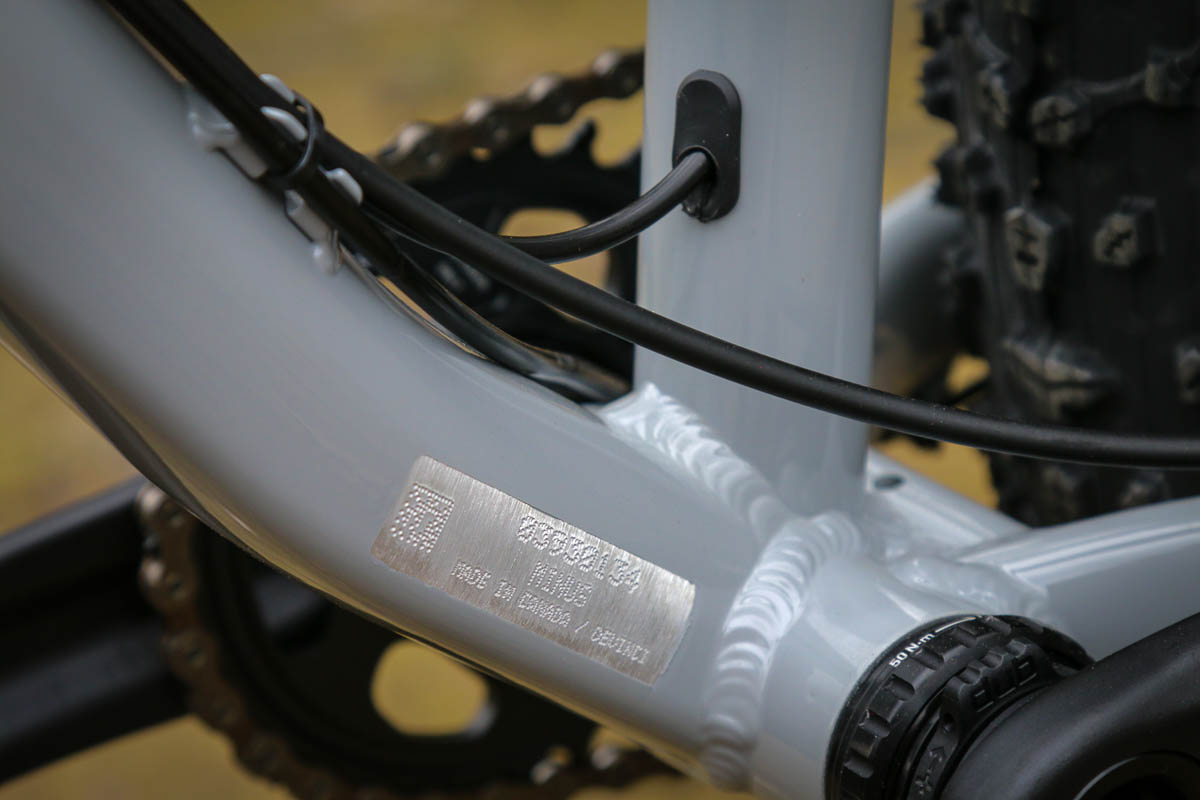 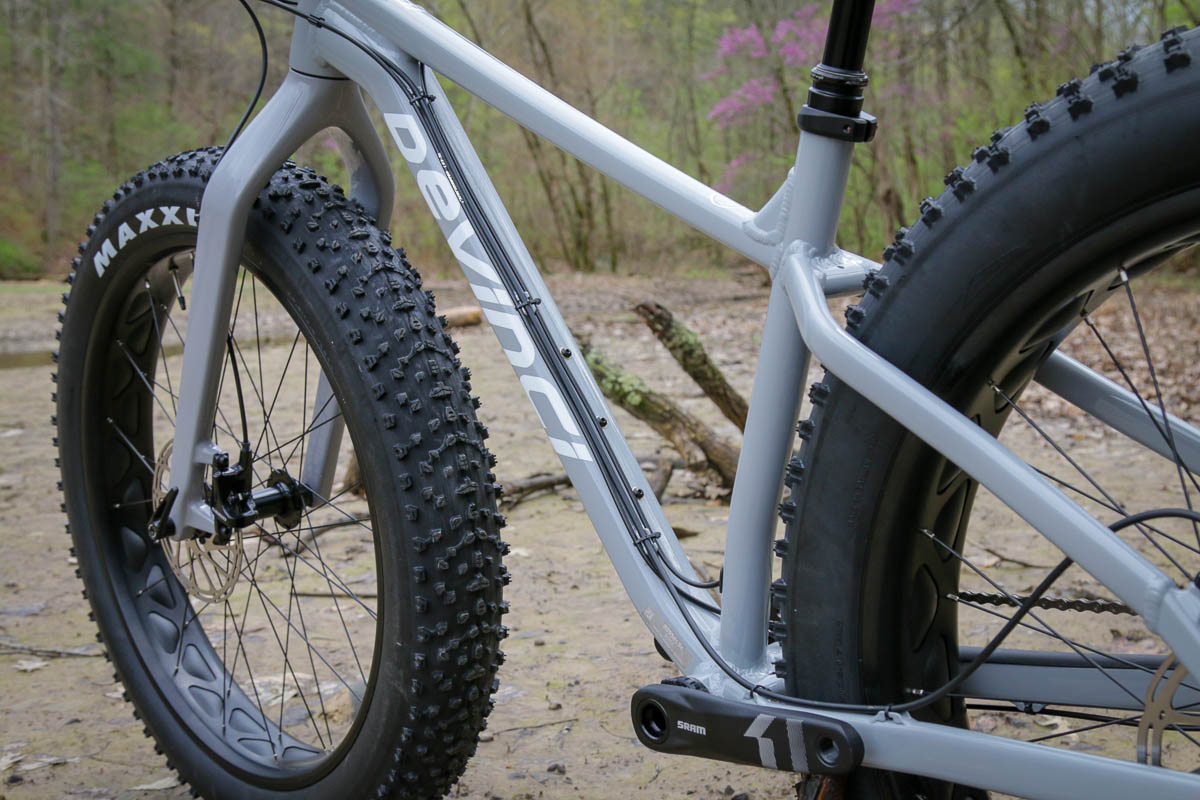 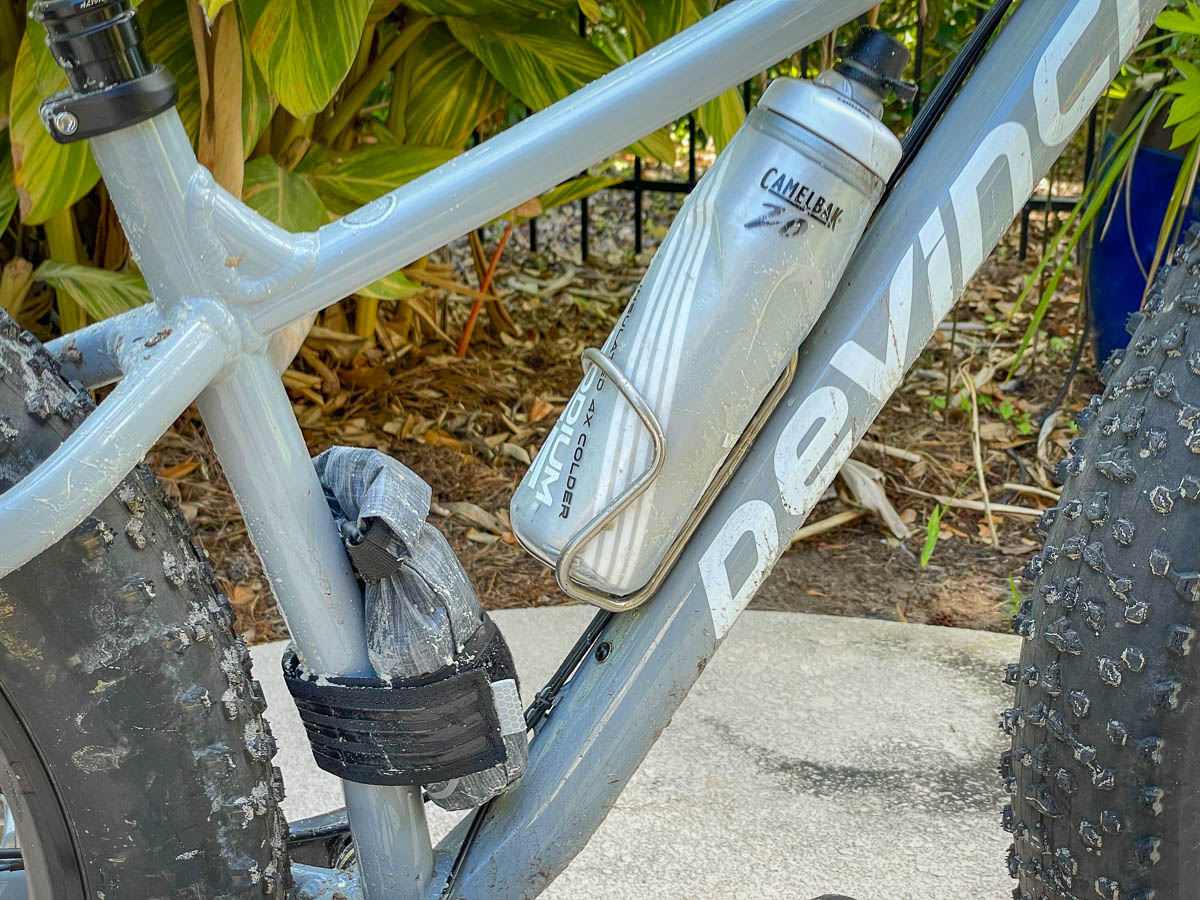 Admittedly, the frame is a bit lacking in accessory mounts as there is a single three-pack mount on the inside of the downtube. The frame is rear rack compatible, but for the most part, it seems that the Minus is intended for shorter fat bike shred-sessions, rather than backcountry fat bike expeditions. The frame triangle is fairly small, but it still seems like there would be room for a standard bottle cage mount on the seat tube—even it was just for mounting accessories like tools, bags, etc. In spite of that, I had no problem carrying what I needed for long rides in the heat with a large Podium bottle in a WTC Morse Cage that was shifted up to fit a WTC B-Rad bag strapped to the seat tube.

In terms of components, the NX 12S build is equipped with quality parts that make for a solid build—literally and figuratively. At 33lbs 12oz (15.31kg) for a medium out of the box, the stock Minus build isn’t exactly a light weight. 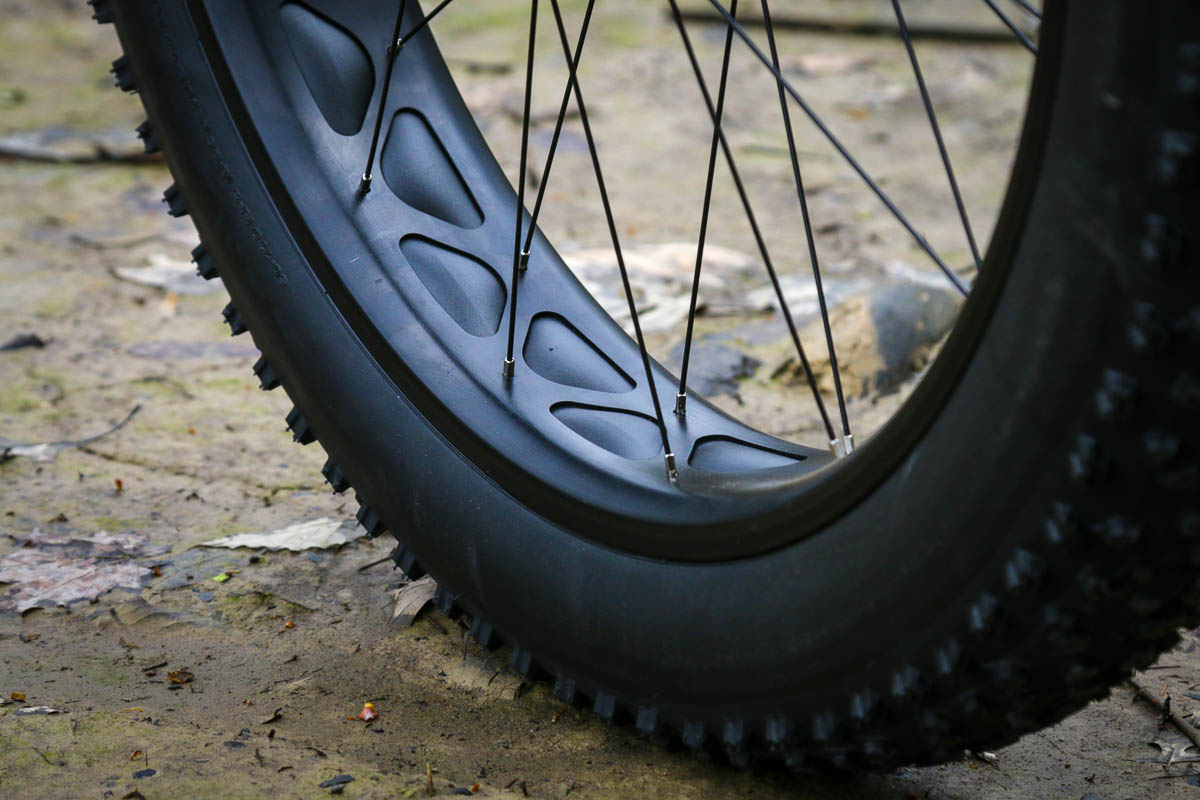 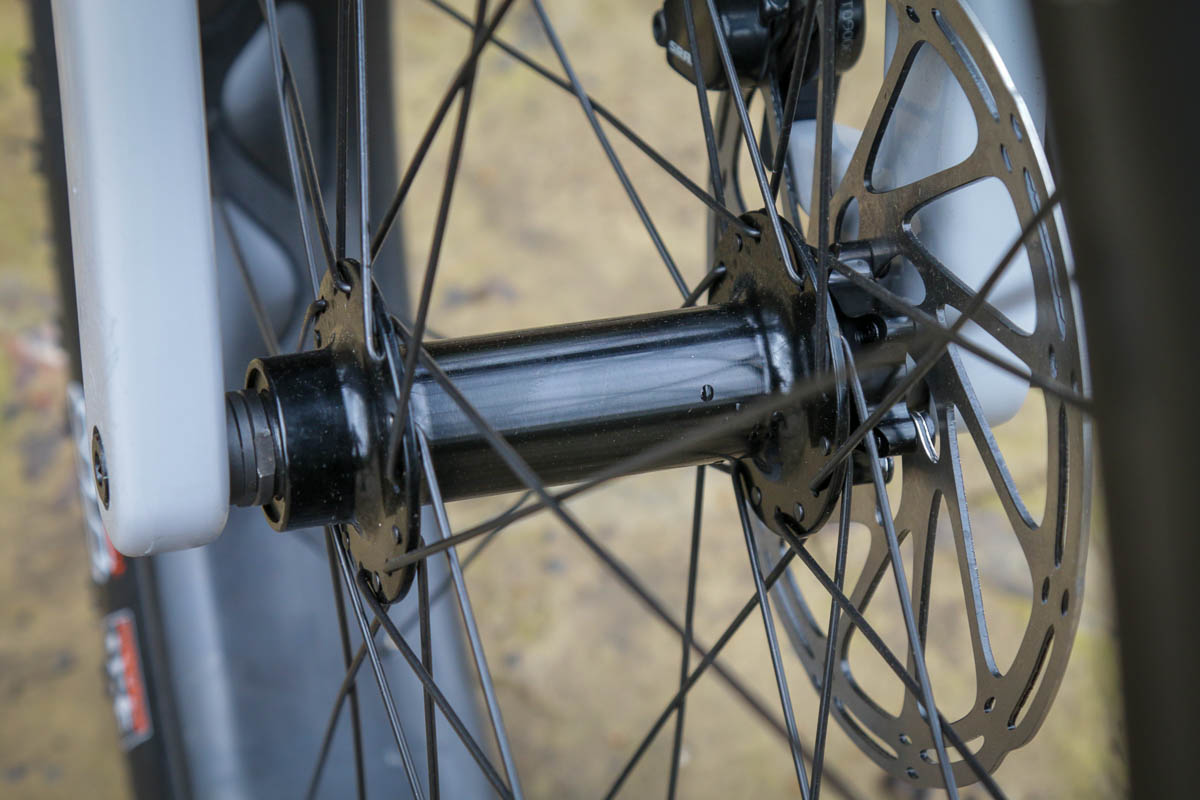 A huge chunk of that weight though comes from the wheel and tire setup. While the Minus rolls on quality Maxxis Colossus 27.5 x 4.5″ EXO Tubeless Ready Tires, they’re set up on Devinci’s V2 Comp rims with tubes. Those rims are laced to Formula DC-150 & DHT-197 hubs with Sapim Stainless 14g spokes and Nylok nipples. It’s a durable build, but quite heavy. 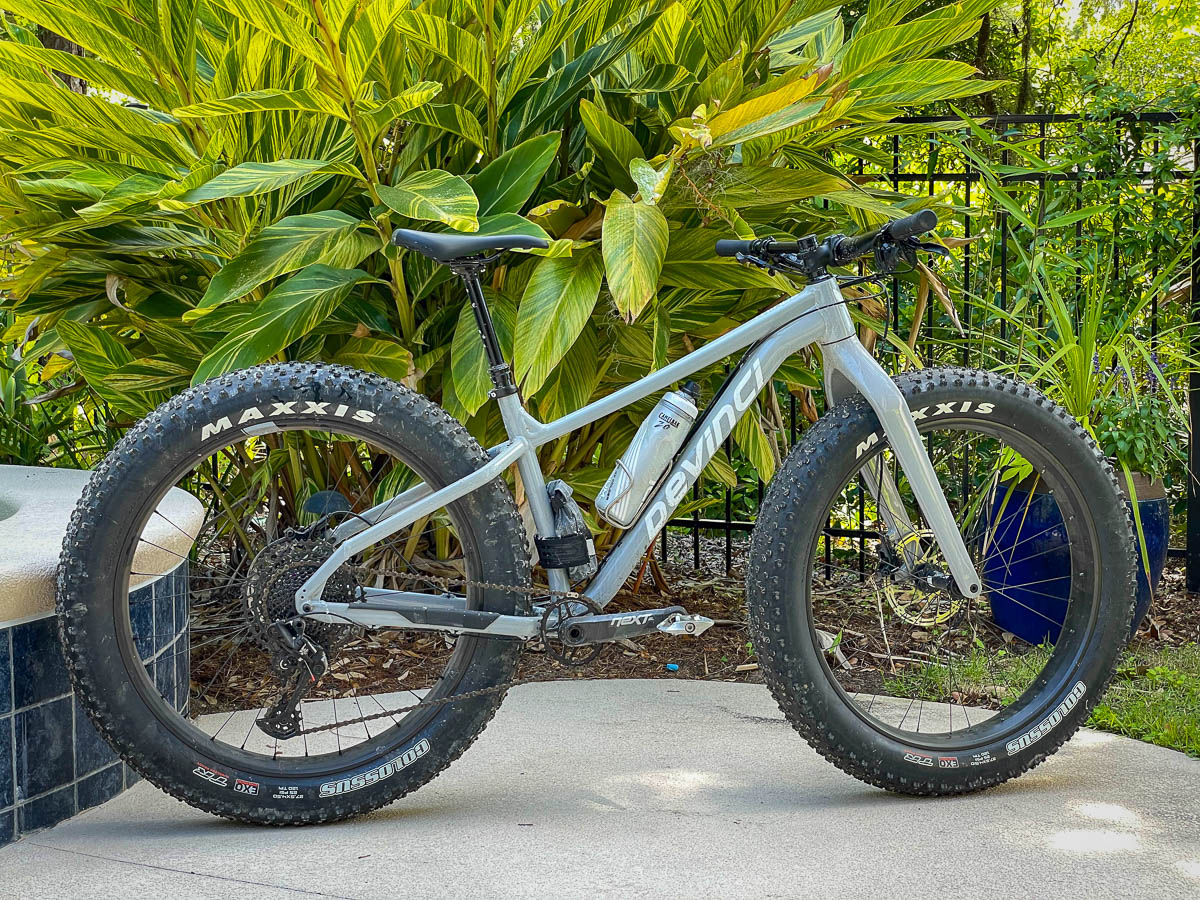 According to Devinci, you can set up these rims tubeless but they recommend the use of Gorilla tape over the heavy rim strips that cover the cutouts in the rims. That’s more hassle than I wanted to go through for a review bike that I would soon have to send back, so I opted to swap in a set of Whisky No. 9 80W fat bike wheels with a DT Swiss hub up front, and an I9 hub out back (that I had to swap in for the wider spacing). When set up tubeless with the stock Maxxis Colossus tires, this dropped almost four pounds of mostly rolling weight. That puts it in the same territory as the Why Cycles Big Iron with ENVE Carbon 685 wheels and Terrene 27.5 x 4.5″ Cake Eater Light tires.

This made a huge improvement on the handling of the bike. And not just because of the difference in weight. When set up with tubes, the Maxxis tires suffered from the usual auto-steer issues where it feels like the front tire wants to pull the fork with a mind of its own. The same tires mounted tubeless, and on a slightly narrower rim (77mm vs 86mm internal), offered a big improvement in handling. This isn’t really anything new—quality tires make the biggest difference on fat bikes, and setting them up tubeless is key to unlocking their full potential (at least in terms of typical fat biking for a few hours at a time, I can’t speak for long-distance, self-supported events like the Iditabike). 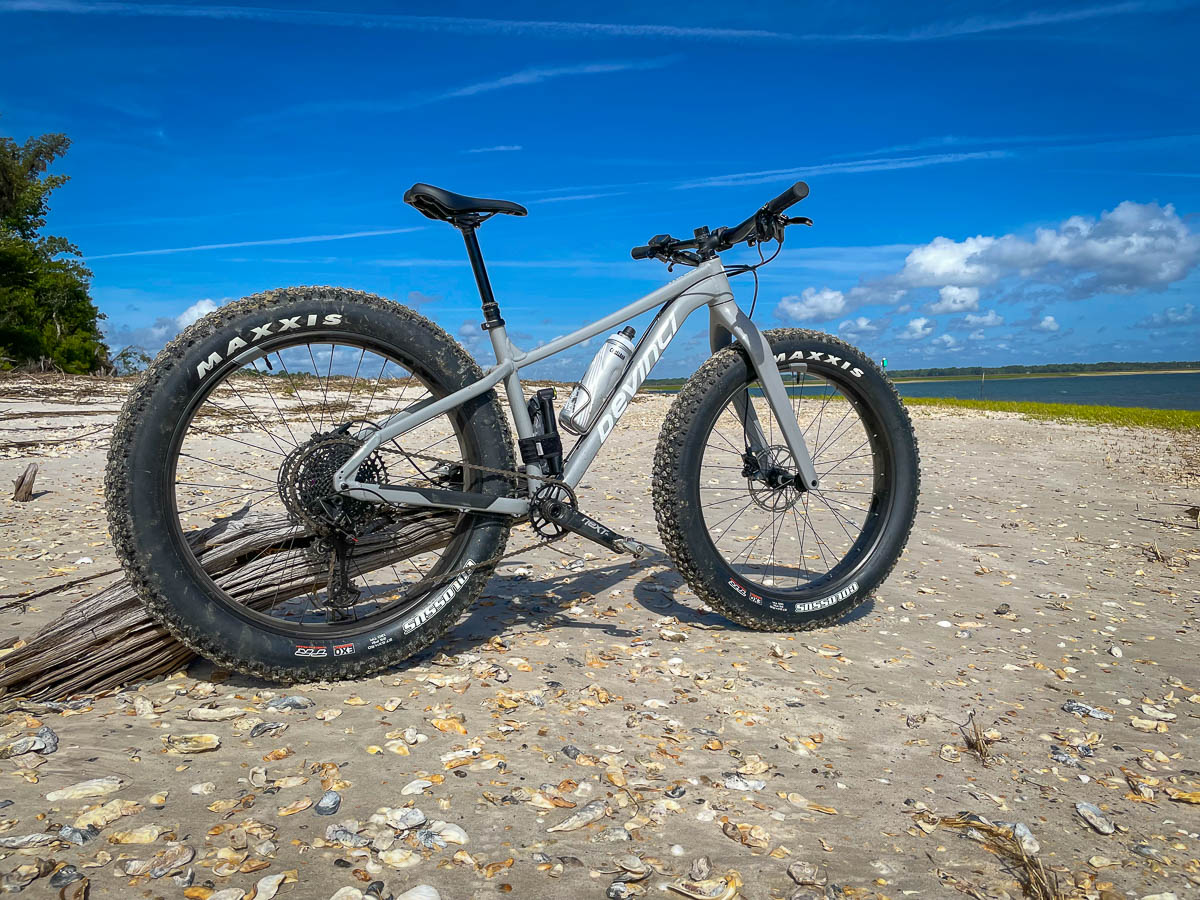 Once the wheels were sorted, the only other component I was curious about swapping was the crankset. With the Minus being a 197mm frame with clearance for 27.5 x 4.5″ tires, the minimum recommended q-factor is 203mm. Coming from an Otso Voytek with a 183mm q-factor, this is wide enough to notice so I was curious if swapping to a RaceFace Next SL crankset with the shortest possible axle would make a difference. 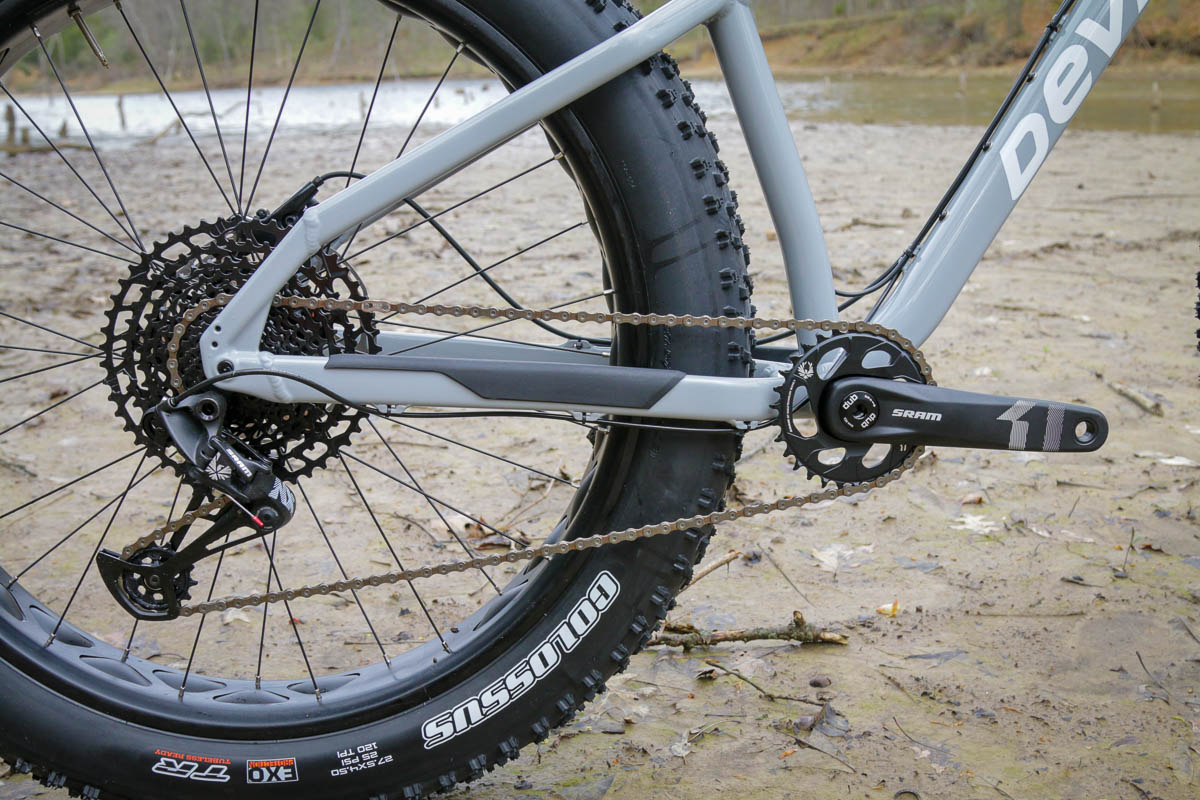 Long story short, it may be a few millimeters narrower, but it isn’t worth the hassle and cost compared to the stock SRAM NX Eagle DUB crankset. Ultimately, this is a frame optimized for flotation and the largest tires and rims, not the narrowest q-factor. With that said, a 203mm q-factor does feel pretty good on the Minus, and for me, it’s workable. 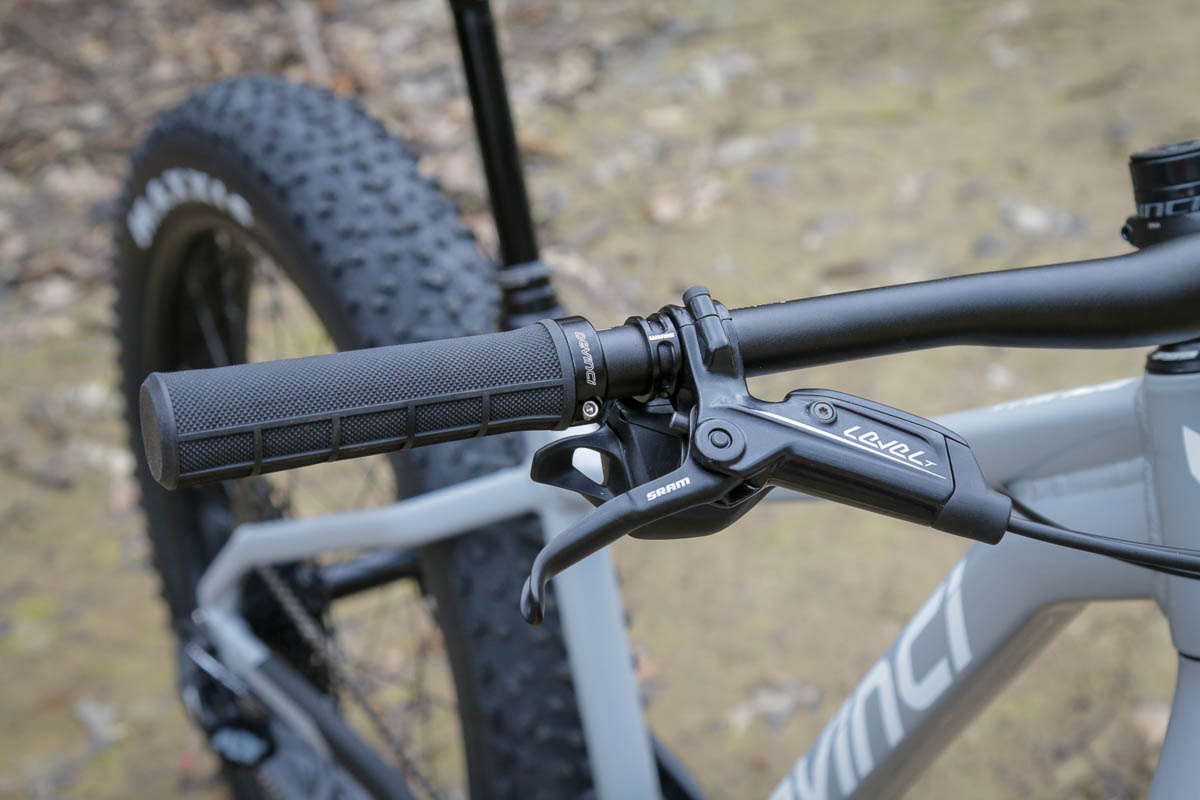 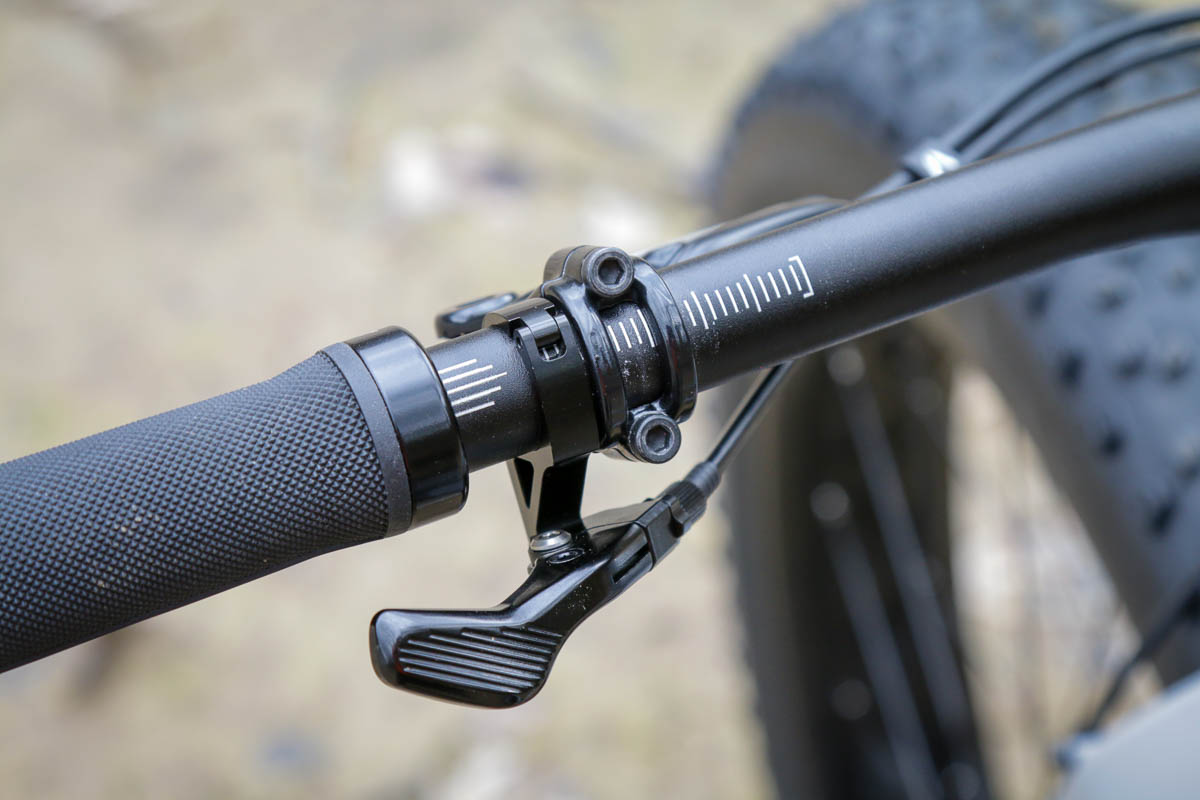 The rest of the build includes Devinci V2 house-brand parts for the cockpit, saddle, grips, a TranzX dropper post with a 1x lever, and SRAM Level T brakes with 180mm rotors. 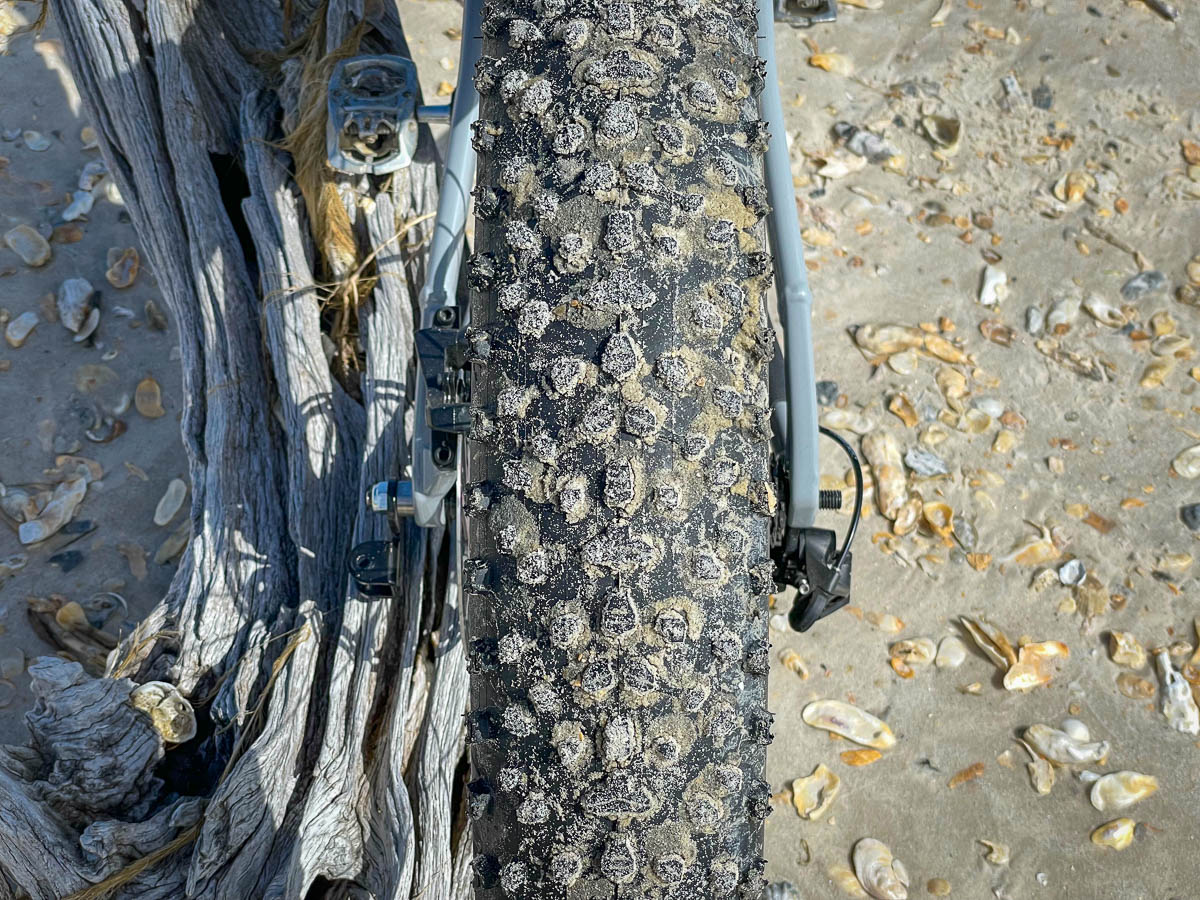 The Colossus tires were pretty good overall. They’re a little square in profile for my liking but offered excellent grip in most conditions with acceptable rolling resistance.

When it comes to 27.5″ fat bike wheels and tires, I’m still on the fence. The Devinci Minus offers one of the best rides yet on the biggest fat bike rubber out there though, so it’s tempting. Admittedly, I haven’t ridden this bike in the snow, which is usually where bigger, heavier wheels and tires make things more challenging. 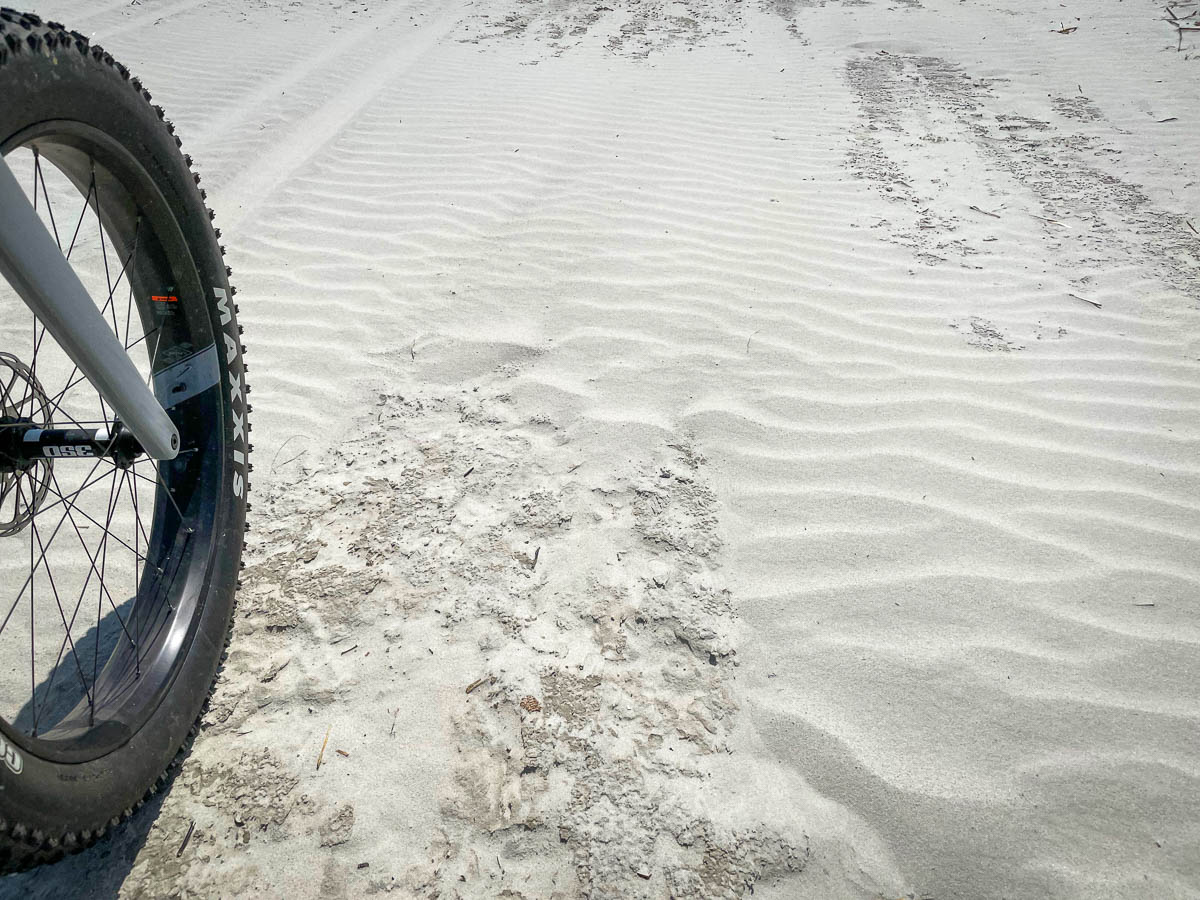 But on soft, energy-zapping sand sections that were hard to walk through, the Colossus tires performed admirably. There’s no doubt that once you get these things up to speed, they roll over everything in their path. The taller sidewalls of these tires seem to allow for better traction when aired way down and offer a ride close to my favorite 26″ fat bike tires.

The question is just how much energy it takes constantly spinning them up when you’re averaging 2-4mph in tricky sections of snow-covered trails. I do think that upgrading to lighter-weight wheels and tires is a must—more so than with 26″ fat bikes. 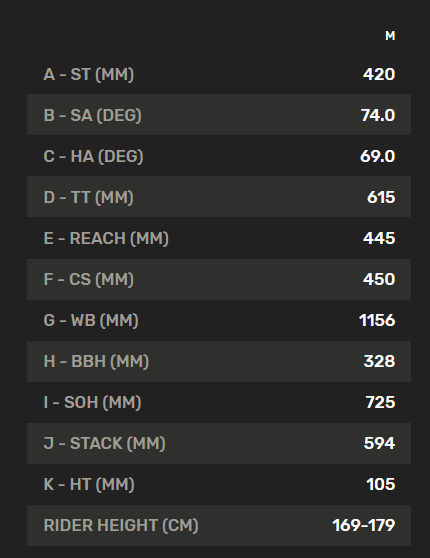 The Minus is offered in S-XL frame sizes, check out Devinci.com for geometry charts for the other sizes.

As for the geometry, Devinci has done a great job of making the Minus feel like it has smaller wheels and tires in most situations. For the most part, the geometry is similar to that of the 26″ Minus, but with tweaks to the chainstay length and bottom bracket height to accommodate the larger wheels and tires. The super tucked rear wheel and 450mm chainstays make for a gigantic fat bike that’s surprisingly easy to wheelie, and one that still handles tight trails fairly well.

Devinci’s mountain bike DNA is apparent here, with a fat bike that’s incredibly fun in almost any situation. This bike certainly leans to the more playful end of the fat bike spectrum, which isn’t easy to do with tires this large. 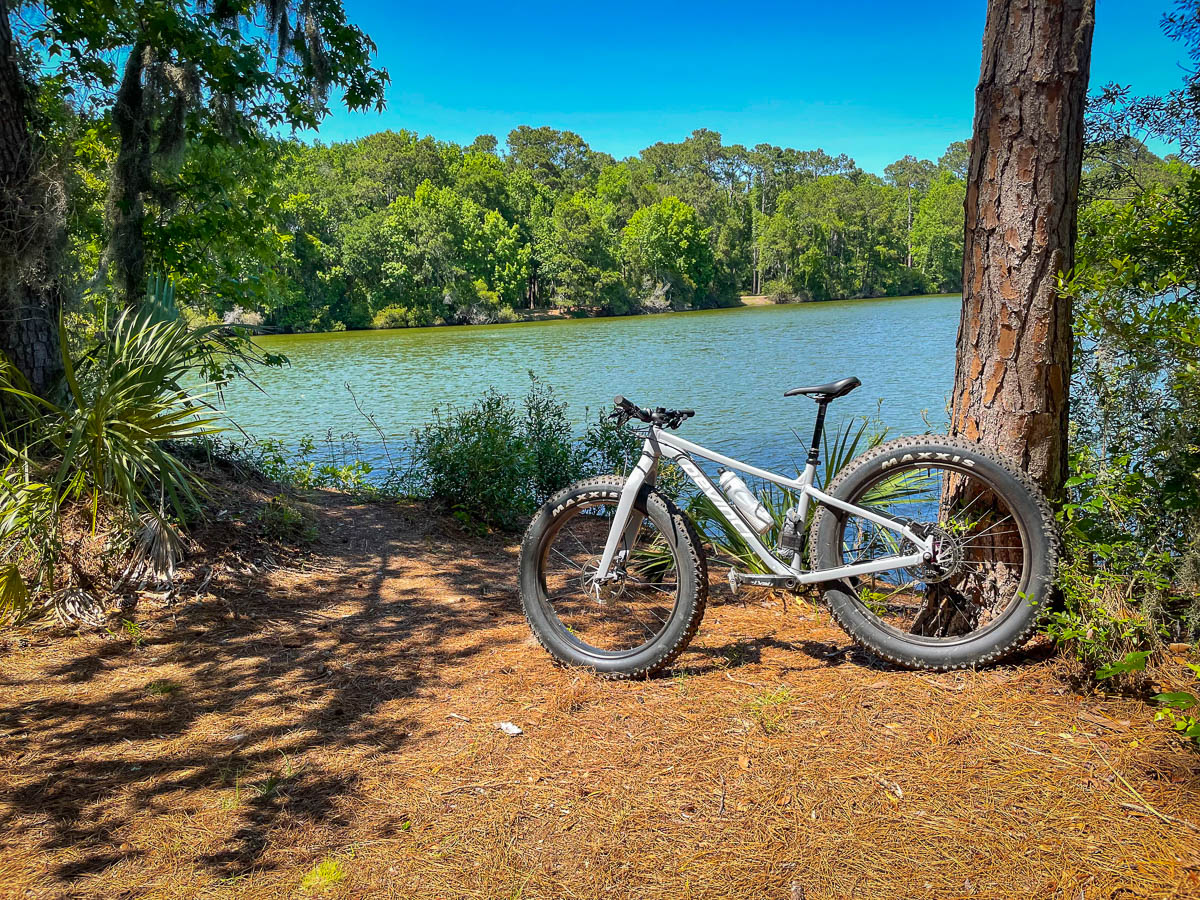 So who is the new Minus for? In my opinion, bigger, stronger, and more aggressive riders will get the most out of this bike—especially with an upgraded set of wheels. There’s only one other 27.5″ fat bike that I’ve ridden that offers a similar ride to the Minus. Considering the entire Minus complete bike priced at $2,289 is less than the Why Cycles Big Iron titanium frame-only, the Devinci Minus is a very appealing bike for those looking for bigger tires with great geometry without busting their wallet.