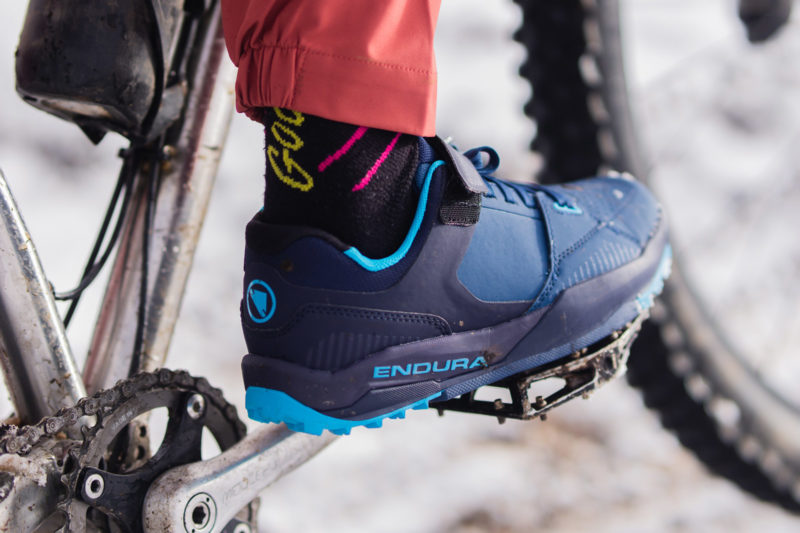 Endura is now kitting out mountain bikers from head-to-toe following the launch of three models of mountain bike shoe. We detailed all the technology that went into the creation of the Endura MT500 Burner Flat Pedal Shoe, Clipless Shoe, as well as the more casual skate-styled Hummvee flats in our launch coverage with our first impressions there, too. Here, we review the MT500 Burner Flats, getting down to business with the burning questions on durability, fit, comfort and of course, grip! 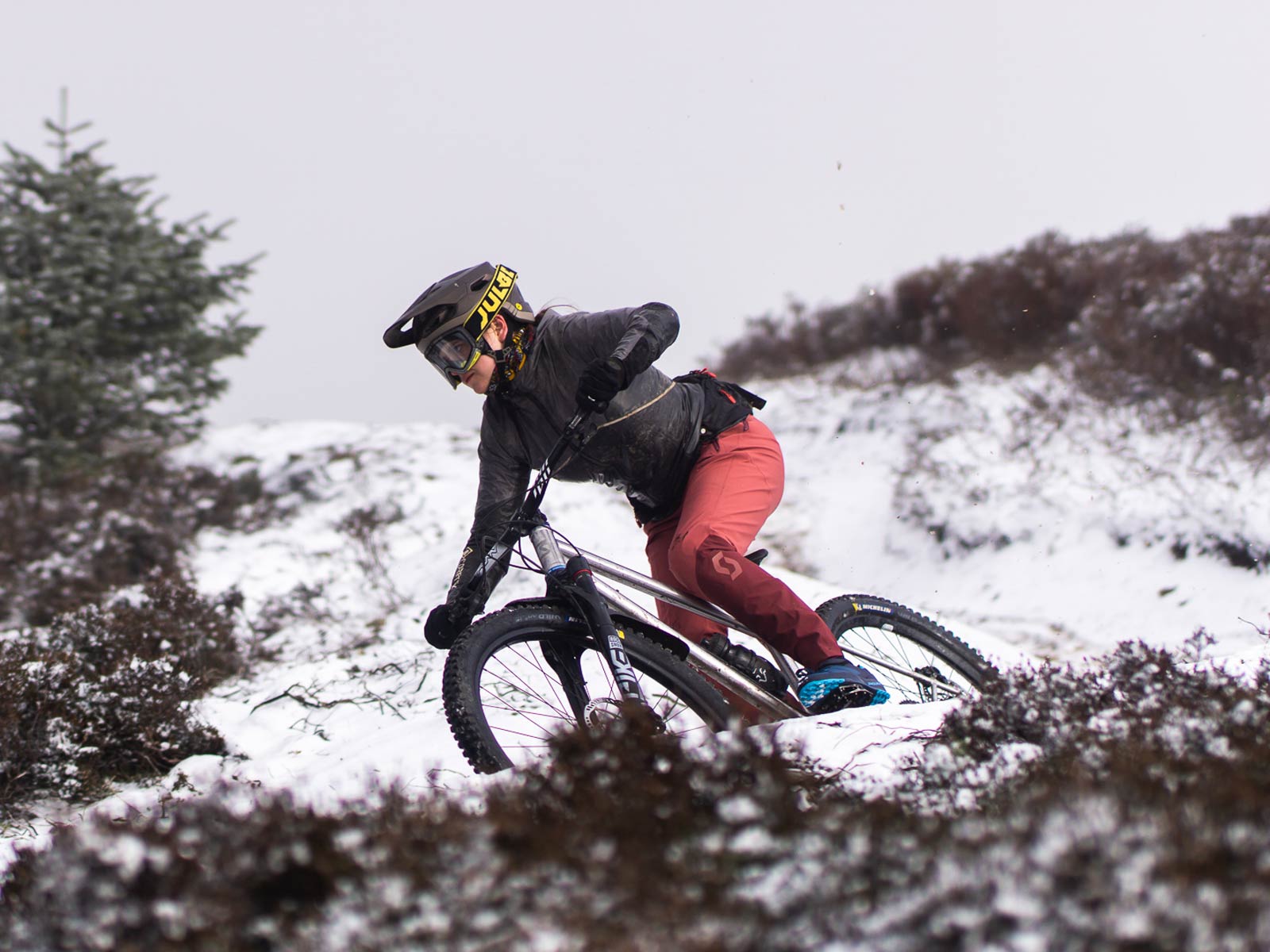 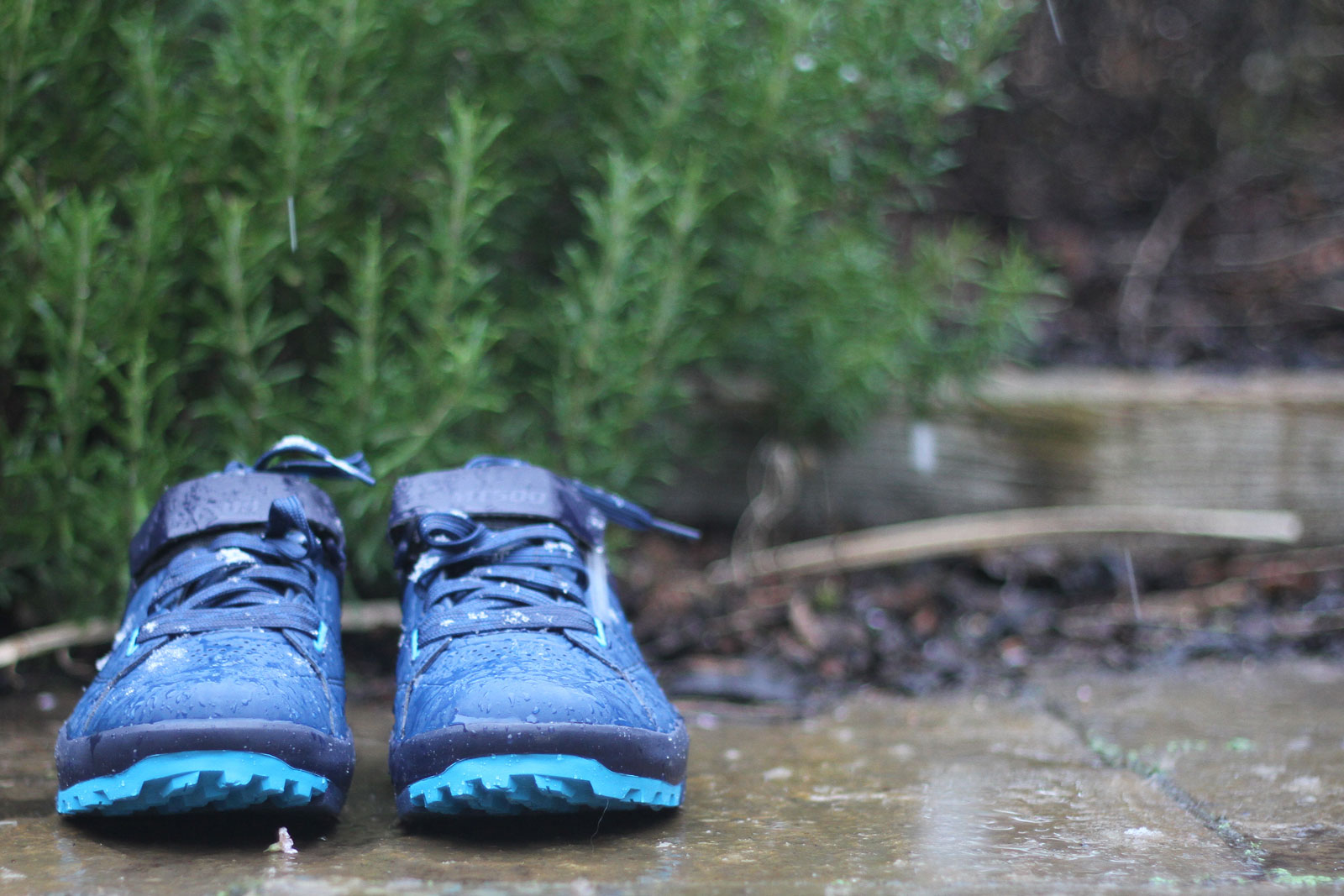 The Endura MT500 Burner Clipless MTB Shoes look very similar to the flat pedal ones we tested here – you can read Cory Benson’s first ride impressions on those here.

I have to admit, when I attended Endura’s virtual launch of its debut range of MTB Shoes, I was a little disappointed not to see a full-on waterproof option from the Scottish brand. Given the almost year-round winter conditions, I feel Endura are very well-placed to carry out expedited testing of such an offering. The MT500 Burner Flats I tested aren’t meant to be entirely waterproof, only weatherproof with a PU upper that sheds water and mud with ease. 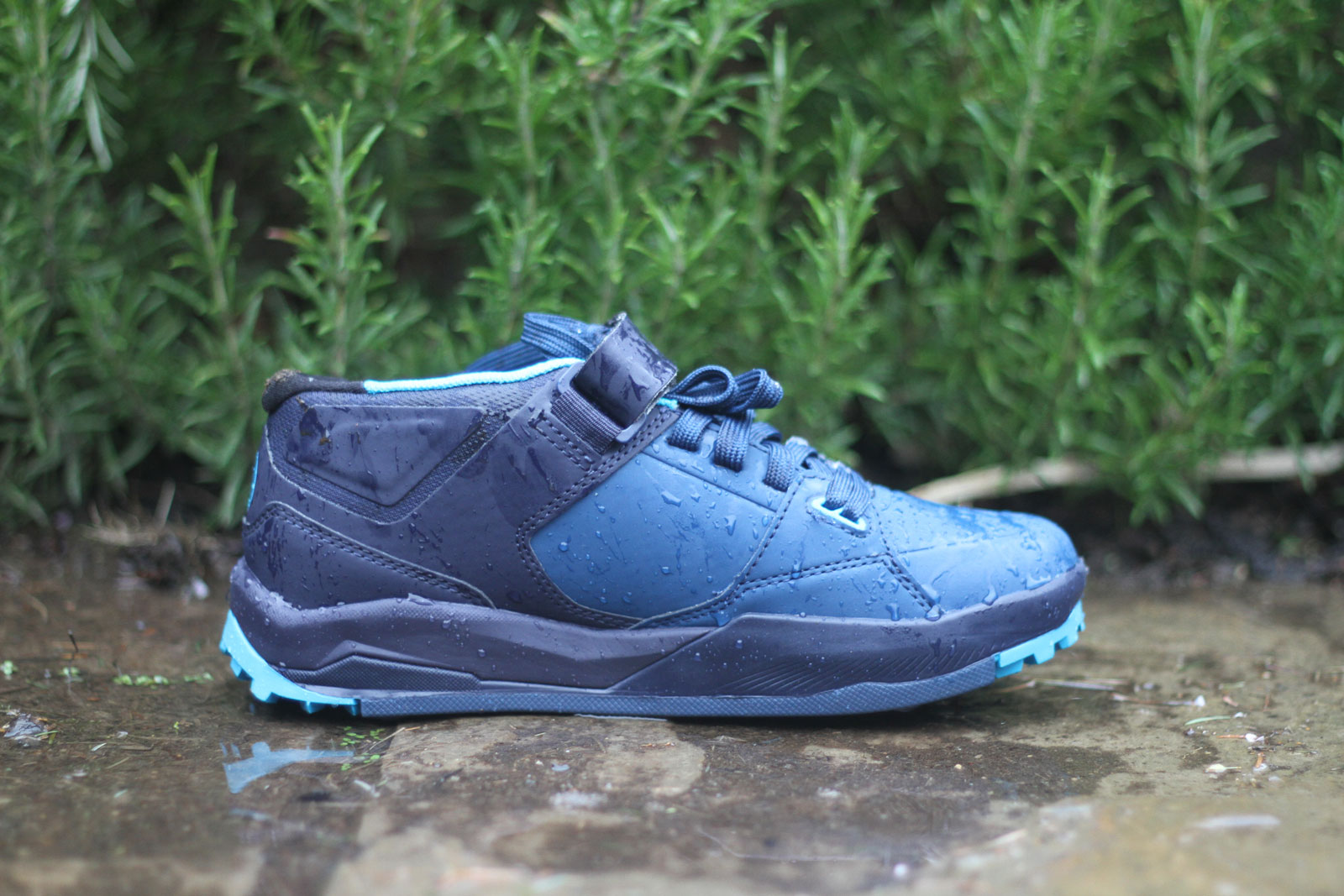 With that out of the way, I won’t hold it against them. It would be silly/insane to start winging about a non-waterproof shoe that was never meant to be waterproof in the first place, wouldn’t it? Onward.

In the box, in addition to the “mild” navy blue laces the shoes were already laced with, was a second set of “wild” laces, a little more loud and proud than the “mild”. Out of the box and into my hands, the MT500 Burner Flats felt super stiff when I tried flexing the toe region upward. 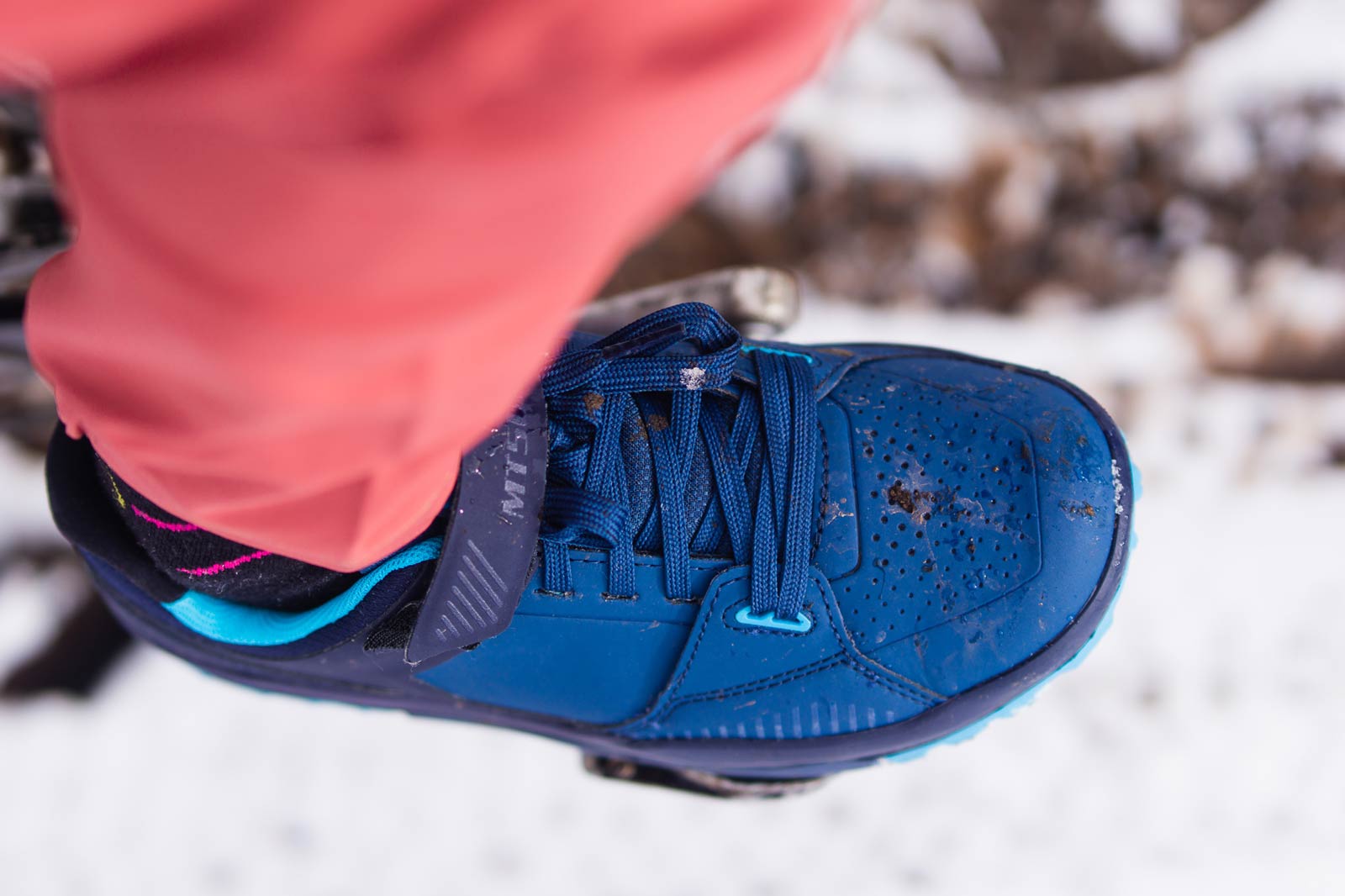 I found the velcro strap came up a little too short, leaving a small amount of velcro exposed to the elements. Credit: Blair Kemp.

My initial thoughts on fit were largely positive. I opted for a UK 5, and am happy to report I felt no desire to up- or down-size from there. It feels a little wider at the toe region than the Five Ten TrailCross Gore-Tex shoe I had been wearing previously, which I felt to be no bad thing. 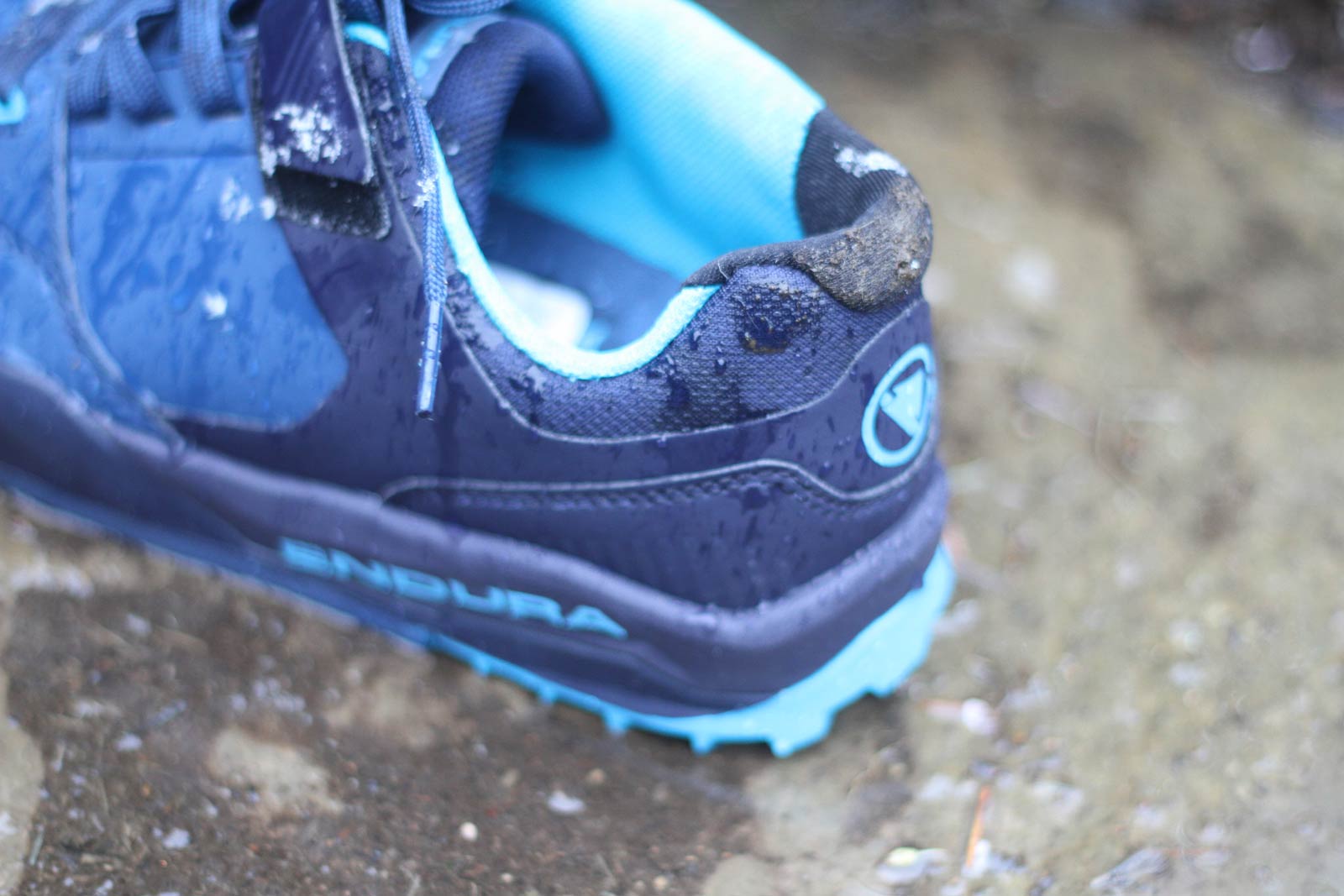 Slipping my foot into the shoe, I noted the deep heel cup gave a super secure feeling at the back of the foot, with the Sharkskin-like material that lined that area helping to prevent the heel slipping up and out of the shoe. That’s in contrast to the relatively shallow heel cup seen on the Ride Concepts Hellion shoe I tested previously. Overall, my foot feels very secure inside the shoe thanks to the velcro strap and the tightly-spaced laces that pull on the two reinforced panels seen at each side of the shoe.

Simply standing in the shoes, the raised portion on the EGM insole (the Metatarsal Button) is clearly felt in the mid-foot region. It is quite pronounced, and I felt it to be ever so slightly uncomfortable when walking around, though not while pedaling or descending.

It did occur to me that folk suffering with the common condition, Plantar fasciitis (pain caused by inflammation of a thick band of tissue that runs across the bottom of the foot), may find the Metatarsal Button aggravates their condition. I am not stating that as someone who knows anything about foot anatomy, because I don’t; I only mention it as a mountain biker who has previously suffered with the condition. 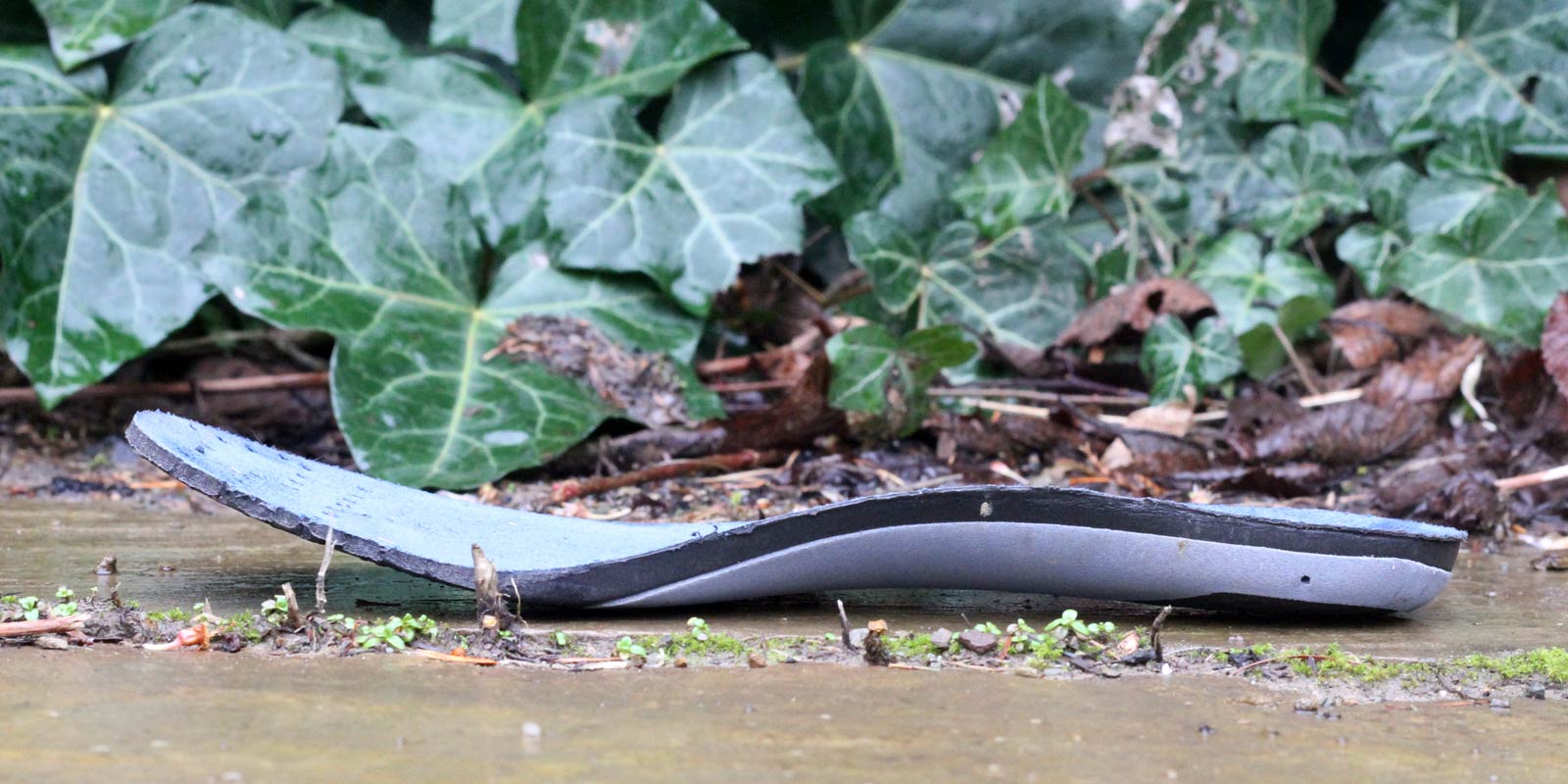 I am also able to feel the raised dots that decorate the surface of the insole, though they aren’t at all distracting. Phil Burt, the rather experienced physiotherapist responsible for the design of the insole tells us these raised nodules act to stimulate the base of the foot and therefore the intrinsic (internal) musculature. “As you push on the pedal the foot pushes into the inset which wakes up and stimulates your foot muscles so they co-ordinate and function better therefore delivering better performance. There is also some evidence to support improvement in blood supply by the same method” – Phil Burt. 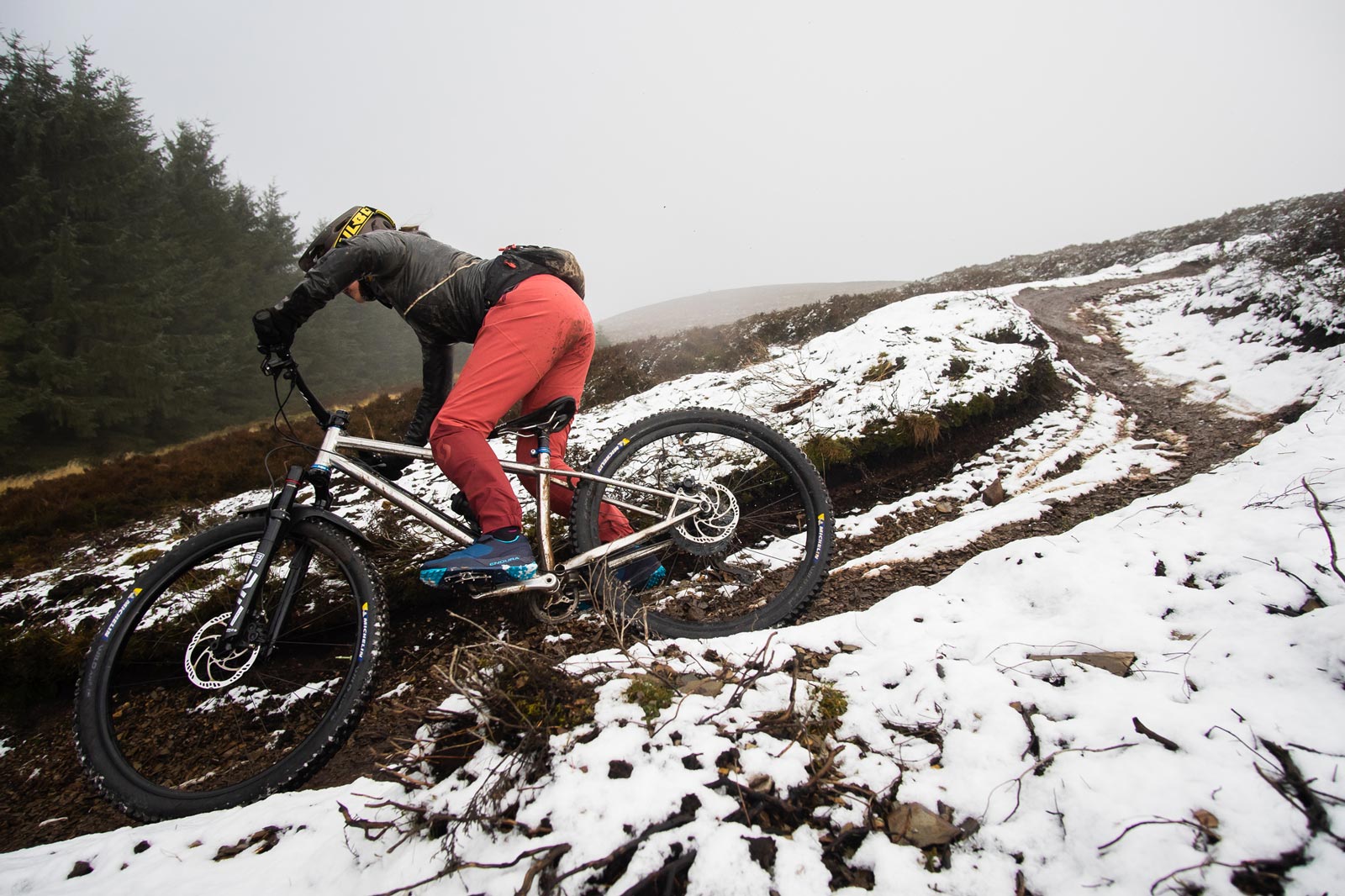 After 2-3 rides, that aforementioned sole stiffness would give way to a more flexible shoe with a reasonable bit of “give”. For context, I feel it is important to note here that I do have a preference for shoes with a flexible sole. I like to able to feel the pedal beneath my feet, as I feel it gives me valuable information as to how much grip I am getting out of the sole, and also feedback about what the bike is doing as I’m descending rough terrain. After a bedding-in period, the Endura MT500 Burner flats now offer just about enough flex so as to satisfy that preference, so long as the pedal I’m using isn’t too concave. 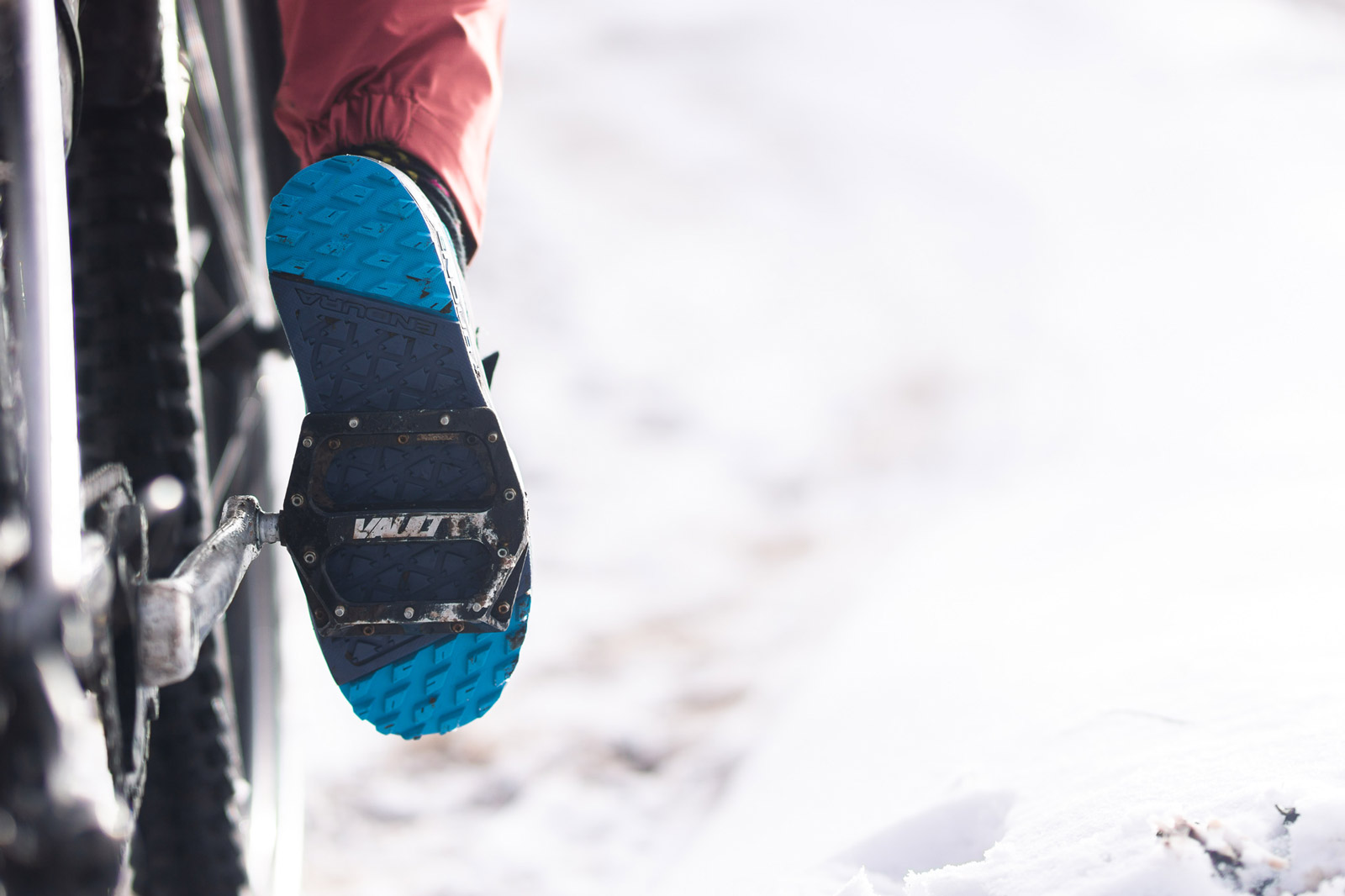 What about the Sticky Foot Grip outsole? Is the rubber grippy enough to compete with the leaders (Five Ten Stealth and Specialized SlipNot) in this category?

Sadly, the answer is no, though it is by far and away much better than some other shoes I’ve tried (for example, the Giro Riddance). While it does offer an OK pedal-foot connection, it doesn’t give that locked-in feel I get from the rubber on the Specialized RIME flats, or any of the Specialized shoes that boast their 3rd Generation SlipNot rubber, in fact. When I want out-and-out grip for riding technical trails that are pushing my ability, I’ll be passing over the MT500 Burner and looking to the abovementioned. 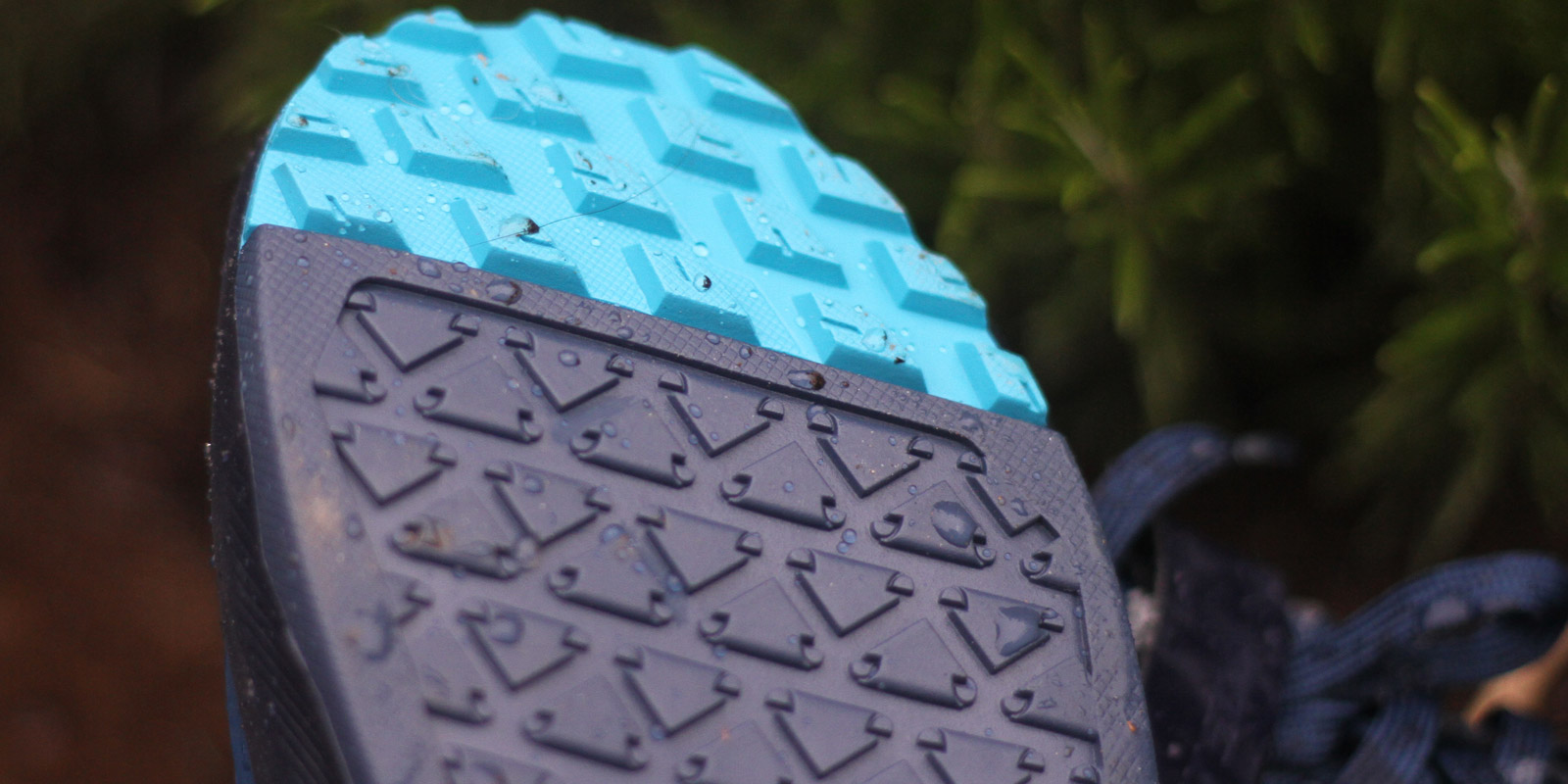 The MT500 Burner shoe has two rubber compounds on its outsole; the pedal interface region is composed of the Sticky Foot Grip compound while the Toe and Heel regions where the tread is much deeper get the Sticky Foot Dura compound

It’s worth mentioning here that, while most of the action photos you’ll see in this review show me riding the shoe with DMR Vault Midi pedals on the Starling Roost hardtail (review coming soon), I took my experience on this particular setup with a large pinch of salt. After all, riding rough enduro trails on a hardtail mountain bike with flat pedals is never going to yield optimal results, and any rubber compound would struggle in that scenario. 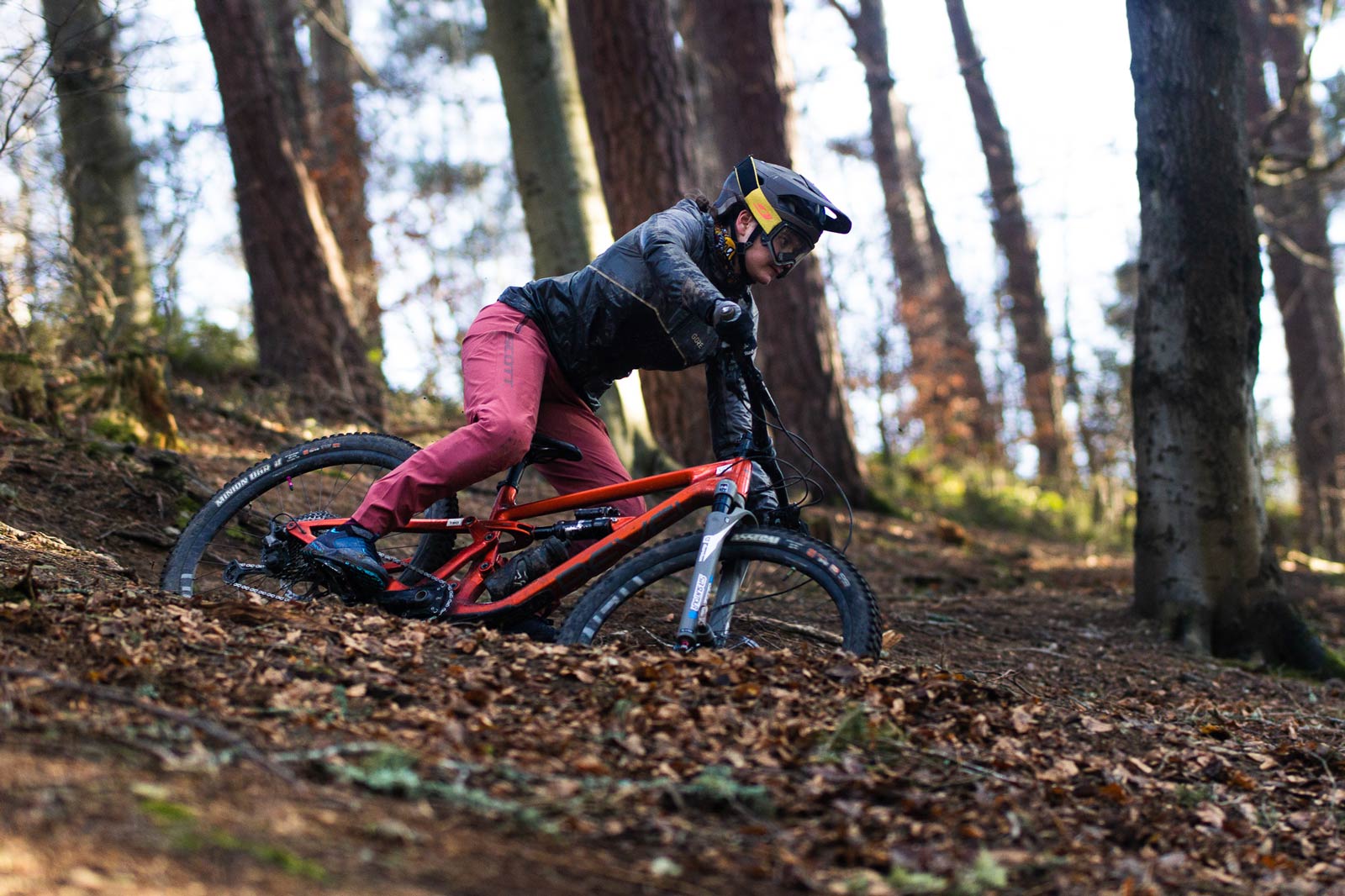 While my feet weren’t bouncing clean-off the pedals, there was a tendency for small shifts forward and backward on rougher trails. Credit: Blair Kemp

Of course, I also tested the Endura MT500 Burner Flats on my Revel Rail (a 165mm travel suspension enduro bike), with a few different pedal options. OneUp’s aluminum pedals delivered the best connection with the Endura shoes, something I was a little surprised about given that pedal’s convex profile. The worst performing setup was with the Pinnd CS2 pedal (with the four centrally-located pins removed). That one is a very concave pedal. I can’t help but wonder, if the MT500 Burner shoe was a little more flexible, it might provide a better connection with those more concave pedals like the CS2 and Vault. 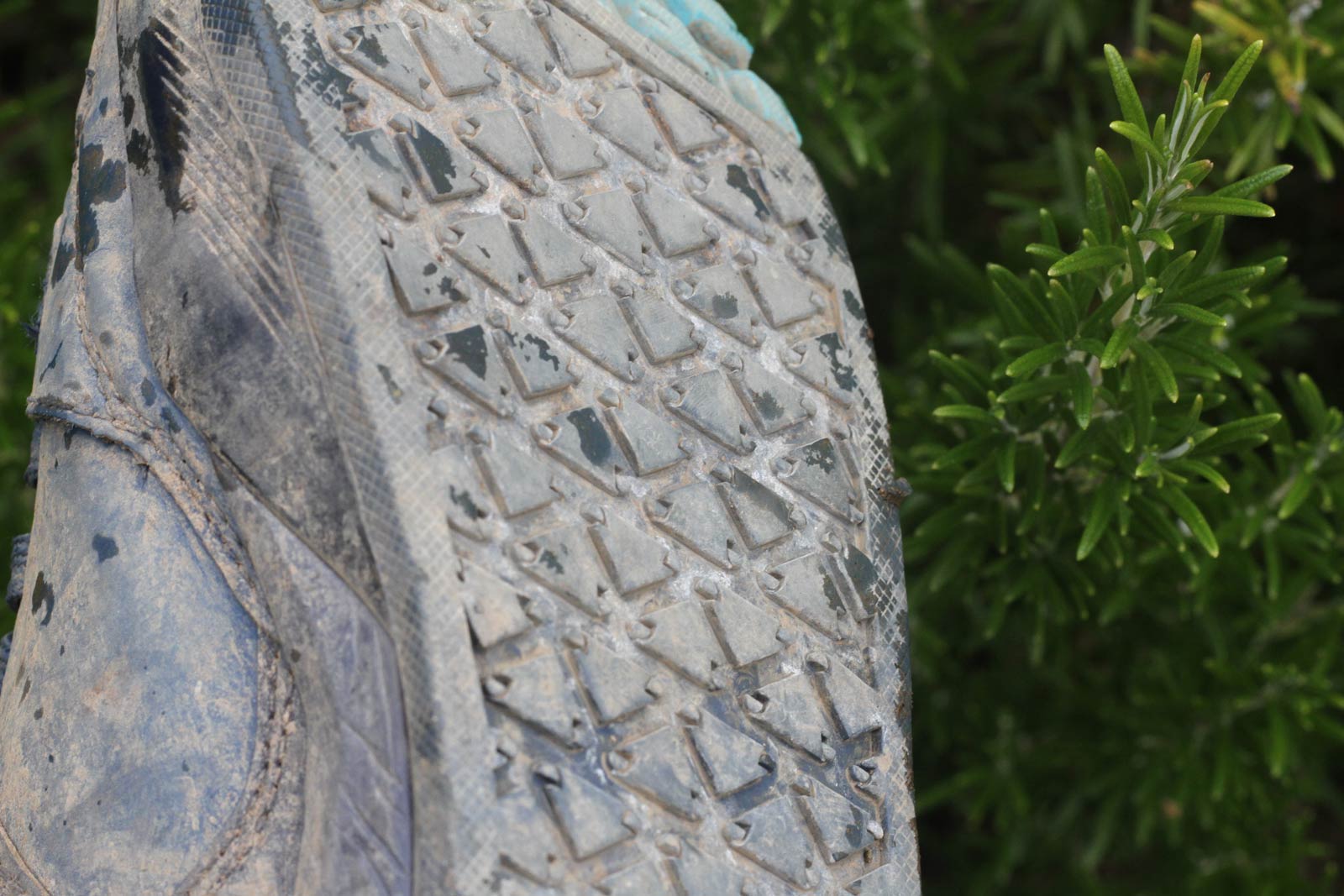 I haven’t spent heaps of time riding the Endura MT500 Burner shoes (maybe 8 rides), so can’t yet comment on durability. The uppers are holding up very well so far with no evidence of tearing, pealing, or frayed stitching at seams. The pedal pins are yet to do too much damage to the Sticky Foot rubber, though there is one small tear on the outboard edge of one of the outsoles. I’ll report back here if and when I put more time in on the MT500 Burner shoe, to keep you guys updated on long-term durability.