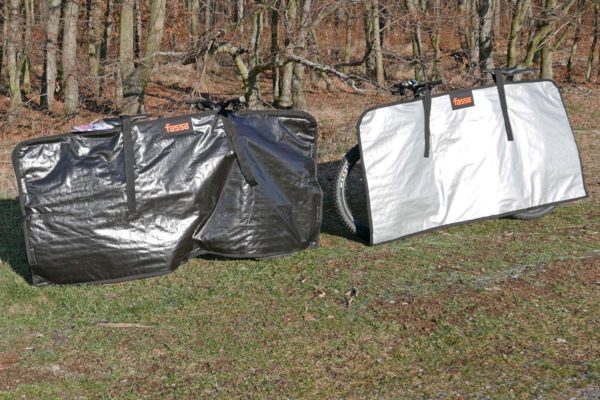 UK bag and protection maker Fassa crafts a number of products in-house to protect your precious bike, whether on the go or stored at home. We’ve been testing the recently introduced single-sided Separator pad, and an updated version 2.0 of their original double-sided Defender pad. While not every cyclist truly needs a dedicated pad to keep their bike safe, we’ve come to really appreciate both the Separator & Defender at home and when stuffed into the back of a car (or van. or RV.). Here’s why… 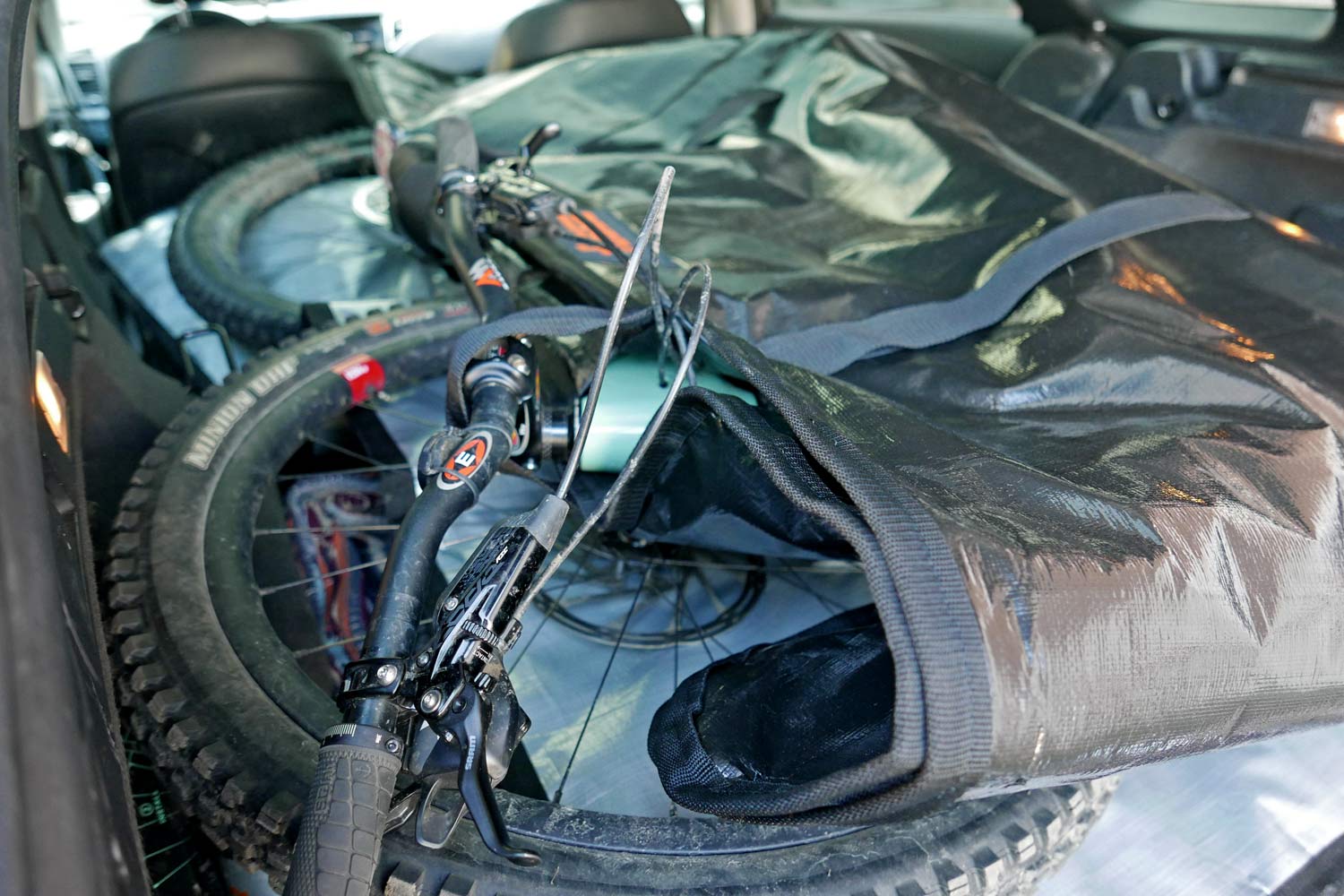 The Separator is a single layer pad meant to slip between two bikes, while the Defender 2.0 is more like an envelope that goes over your bike, leaving only the saddle and handlebar exposed. The “2.0” update made it longer and bigger to accommodate modern enduro bikes with stretched wheelbases and big, 29er wheels. The edges are reinforced and over stitched to keep them from coming apart. And they’re 100% designed in the UK & then made by hand in Dorset, England. We found the build quality to be excellent. So did Canyon, who uses a bunch of Separators which keep their bike fleet protected in the back of their vans out on demo tour. 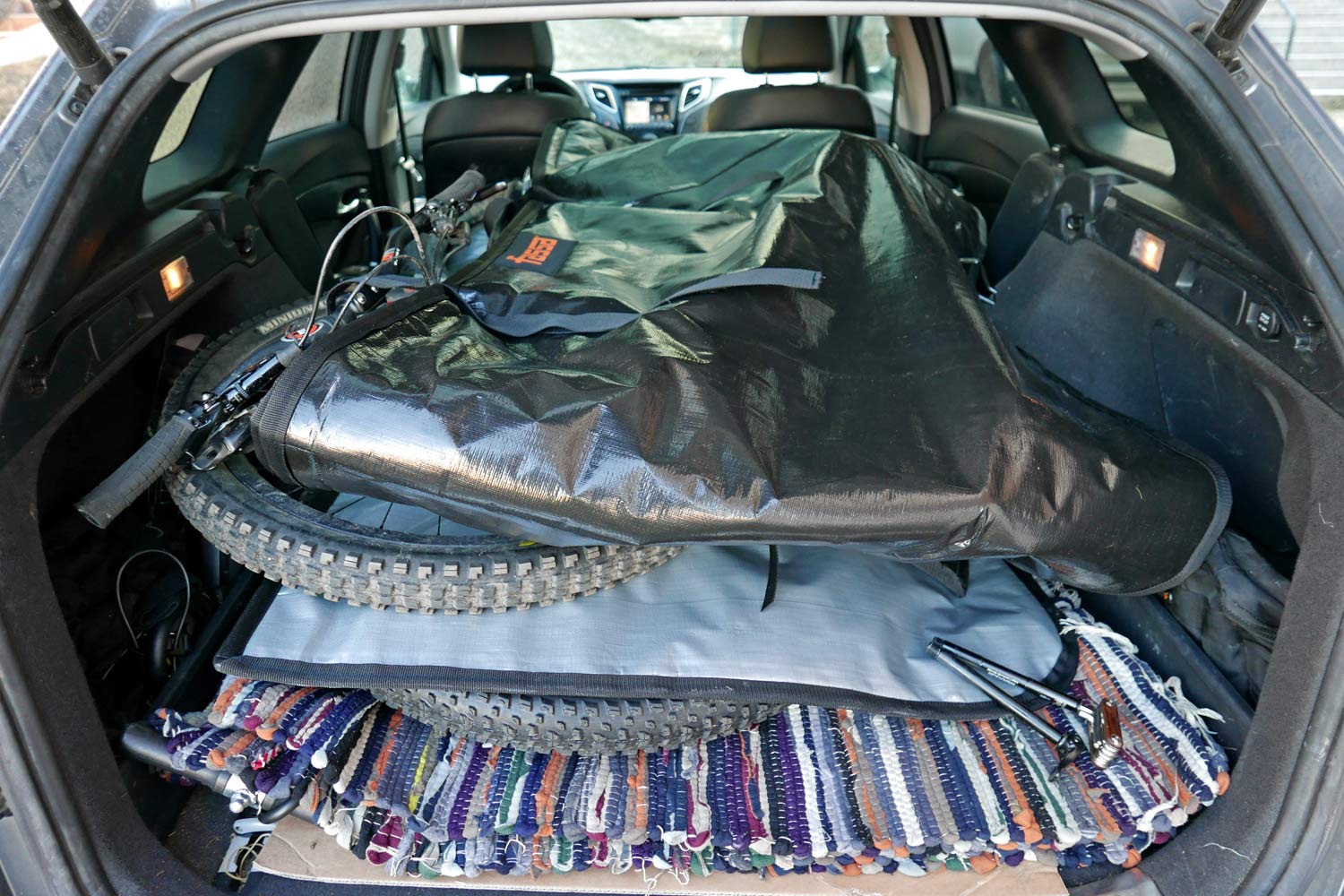 The Separator is silver, and the Defender 2.0 is black (as tested, but you can order either one in either color).

So, why would you want one of these? Our first thought, like Fassa suggests, was protecting bikes in transit. Sure, I have a roof rack (let’s not talk about fork mounts and all the stupid modern axle standards). I even have a two-bike hitch rack as well. But on longer highway trips (especially in foul weather), I like to drop the rear seat in my wagon, and pile a couple of bikes inside the car.

Even with big enduro & trail bikes, popping the front wheel off can be sufficient to stuff the bikes in the trunk. But if I don’t want to damage either bike, wheels, or car I want to put some padding between the gear. Looking into the trunk of my car you’ll find the normal solutions: a huge woven blanket, and giant piece of cardboard.

We decided to give the Fassa Separator & Defender pads a head-to-head test against each other, and vs. those basic (and admittedly cheaper) alternatives. What we found is that there’s so much more you can do with them to justify the price. 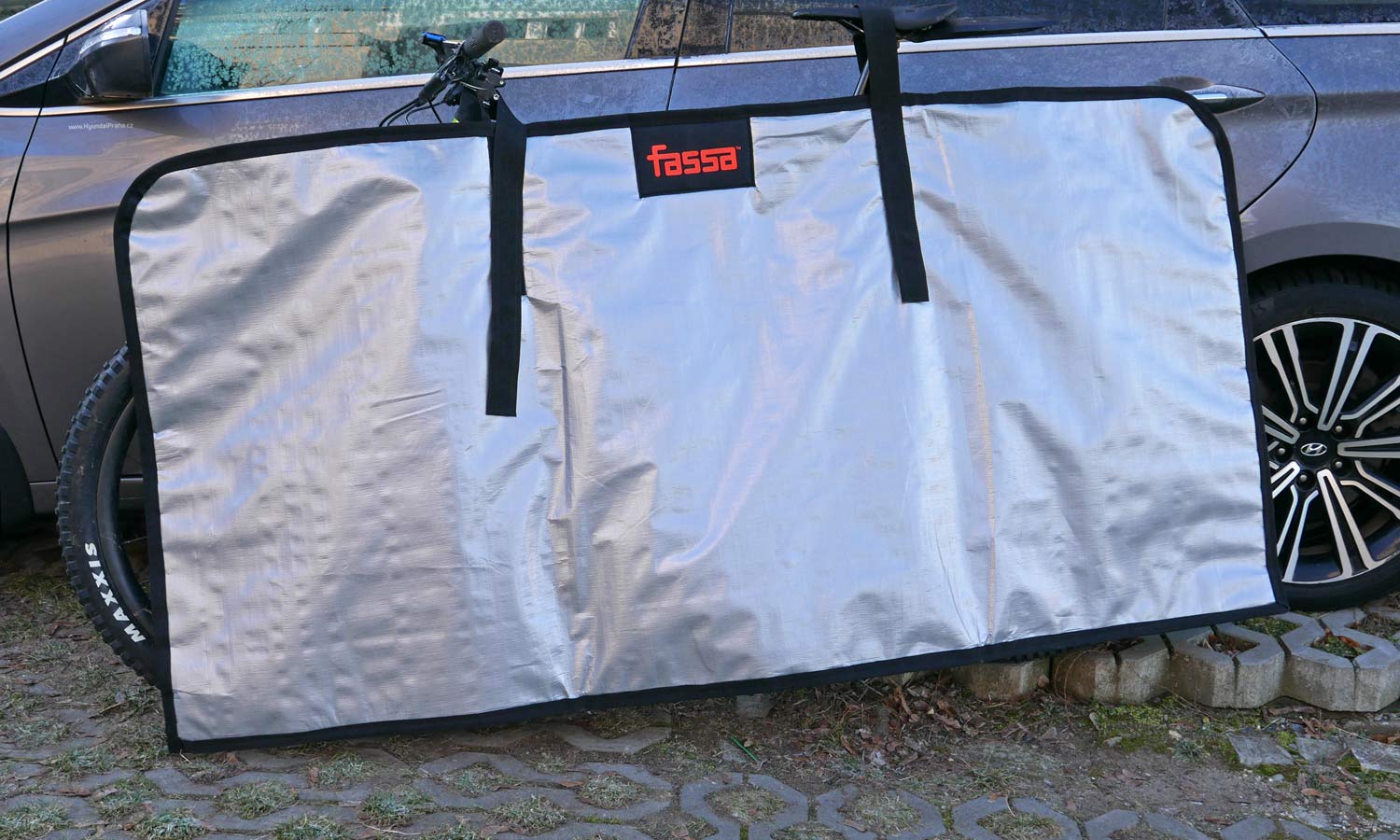 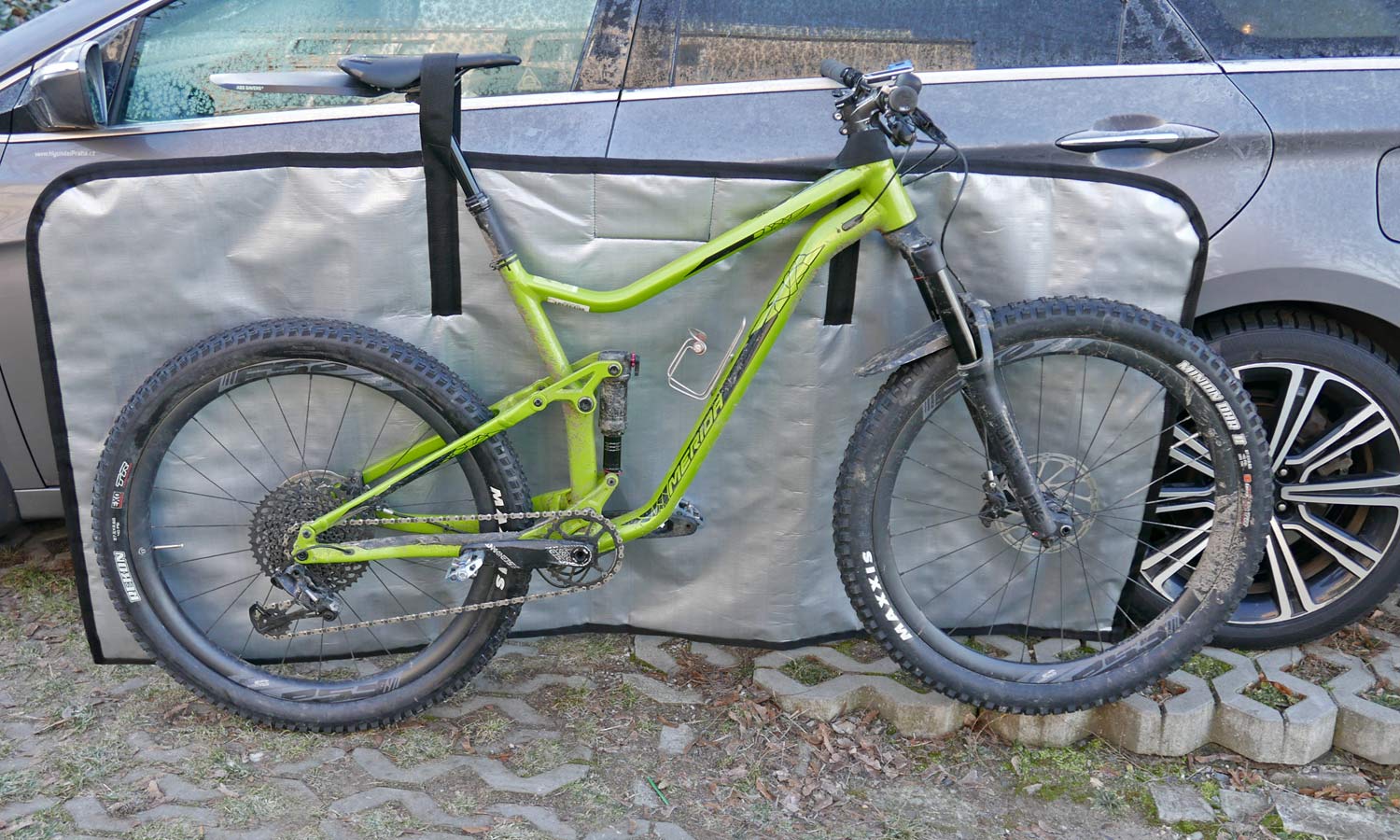 You install it on your bike by simply looping one of the long nylon+velcro straps over the saddle & attaching the velcro, then looping the second strap over the stem. 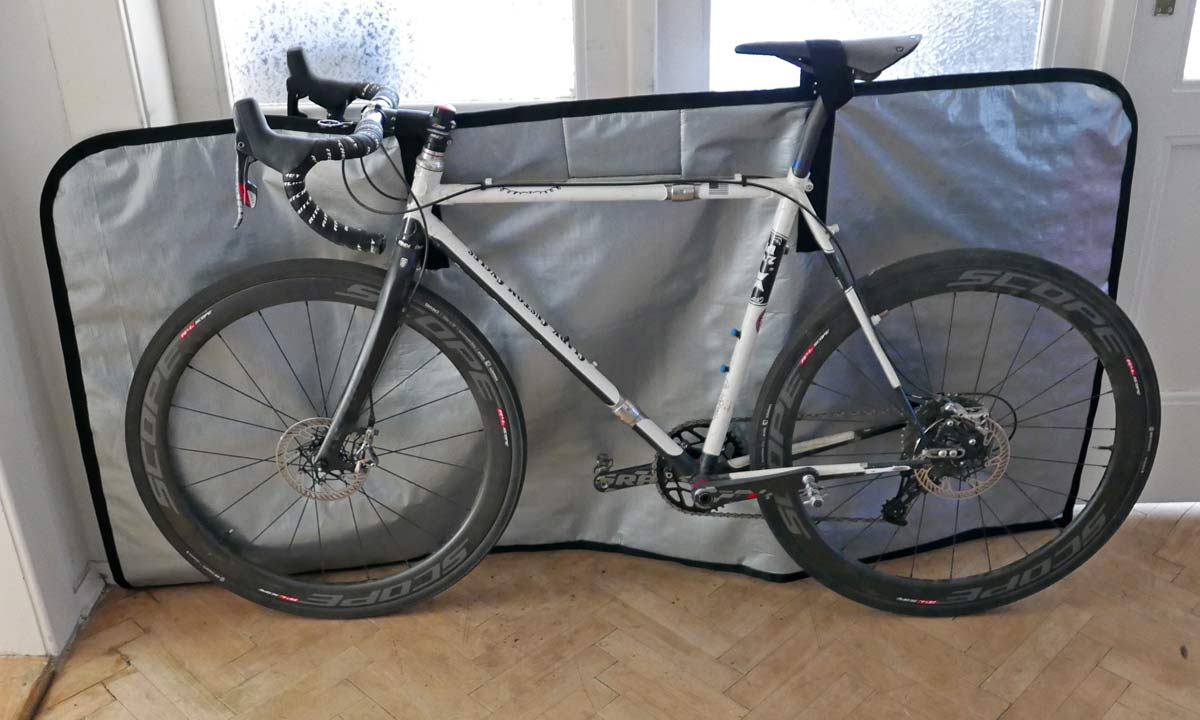 On a mountain bike you pretty much just need to raise your dropper post. And on a drop bar bike you will need to tuck it up tightly under the bar against the stem. On a small 27.5 mountain bike we were still able to have it just barely touch the ground, but on a similarly small (~47cm) 700c road bike the 92cm height bunched up under the bar. 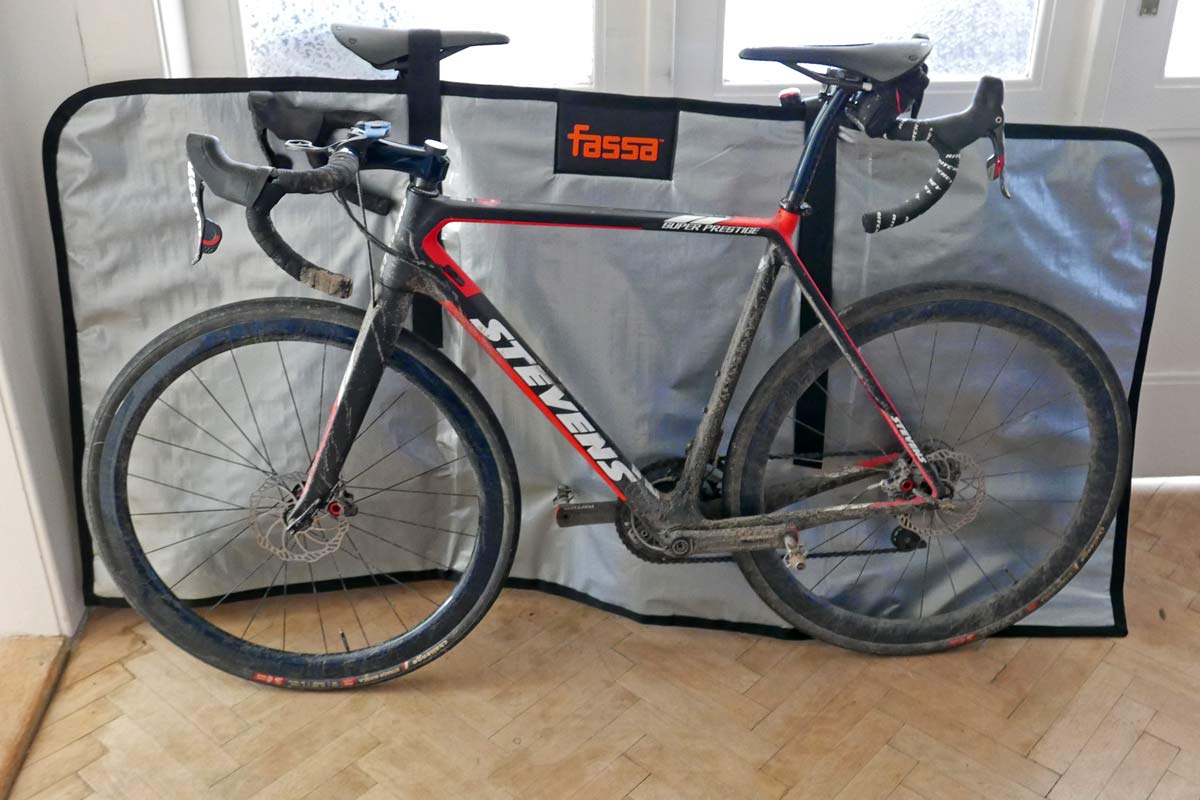 So how does it work?

We really liked the versatility of the single-sided Separator. At home we attached it to one bike and could lean another bike directly against it without worrying about where the bars hit each other or if a pedal would get in the other’s spokes. You can even maneuver a bike with the Separator attached, pushing the bike forwards or backwards without the pad interfering, or even shoulder the bike to go up & down stairs.

Its simplicity also worked in the back of the car, where you could put one bike in, then simply slide the Separator over top before putting the next bike in. This is where the Separator was much easier to use than the blanket, and offered much better protection than the old cardboard box which routinely gets punctured.

It also makes a waterproof pad to toss on the ground and stand on, where we could change out of dirty shoes & clothes post-ride, even in a damp gravel parking lot. Fassa also claims the Separator can double as a sleeping pad or extra insulating pad when camping. 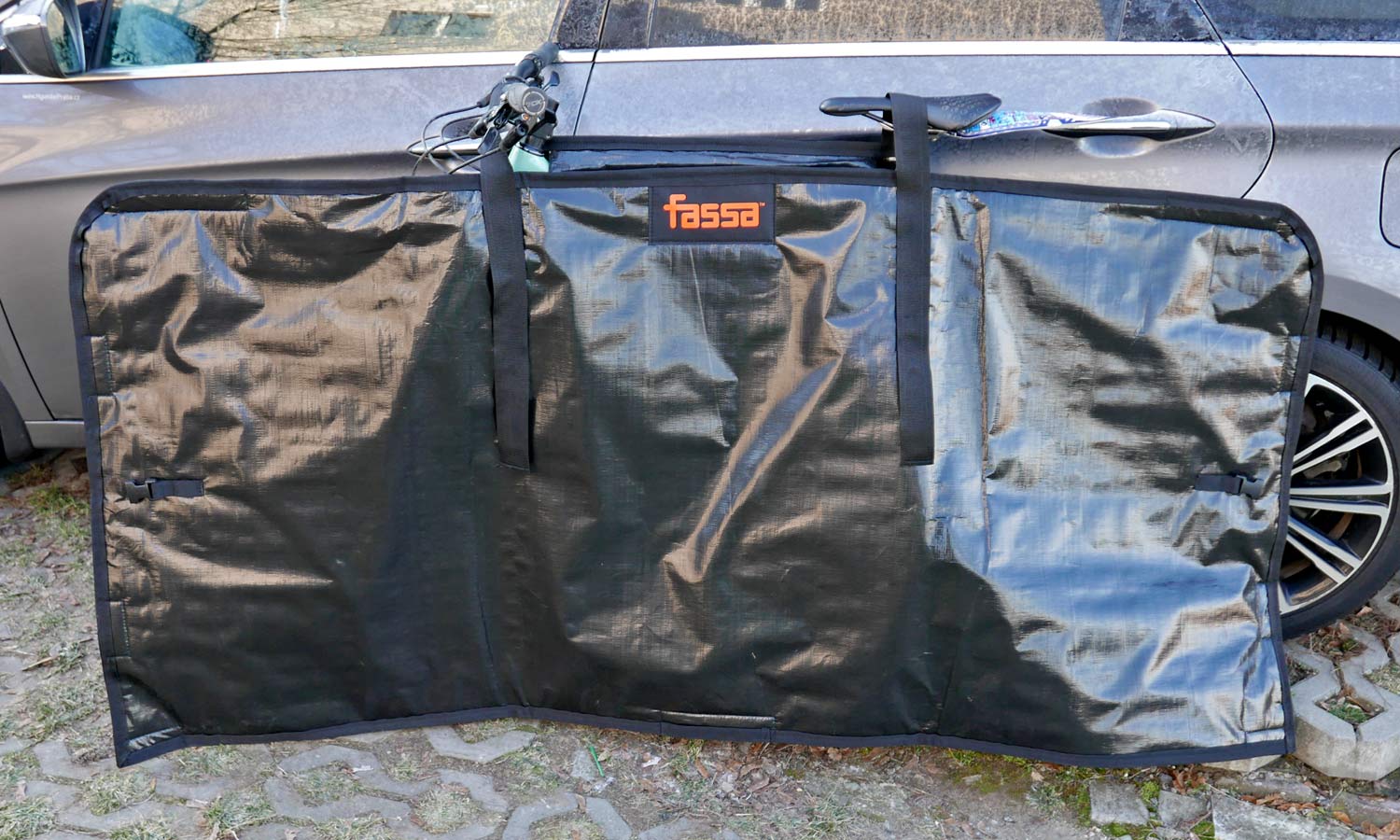 In its essence, the £100 Defender is two Separators joined together with a fabric panel across the top middle to offer protection to your entire bike from both sides. The new, longer v2.0 measures 92cm x 200cm. 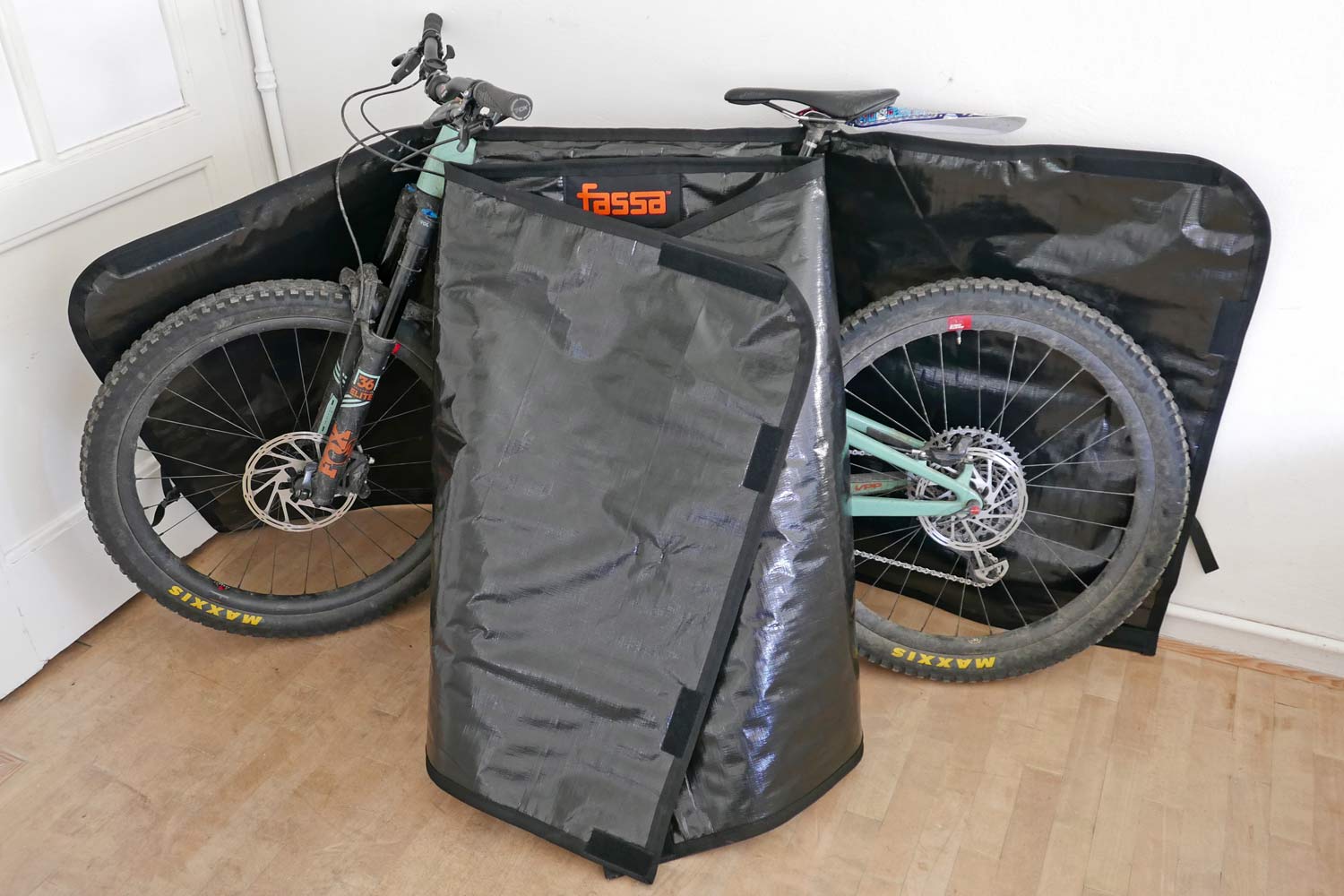 A bit longer than the original, the Defender 2.0 is large enough to cover most road to XC mountain bikes. Long wheelbase, long-travel mountain bikes will stick out of either ends, but Fassa has solutions to make that less of an issue as well. 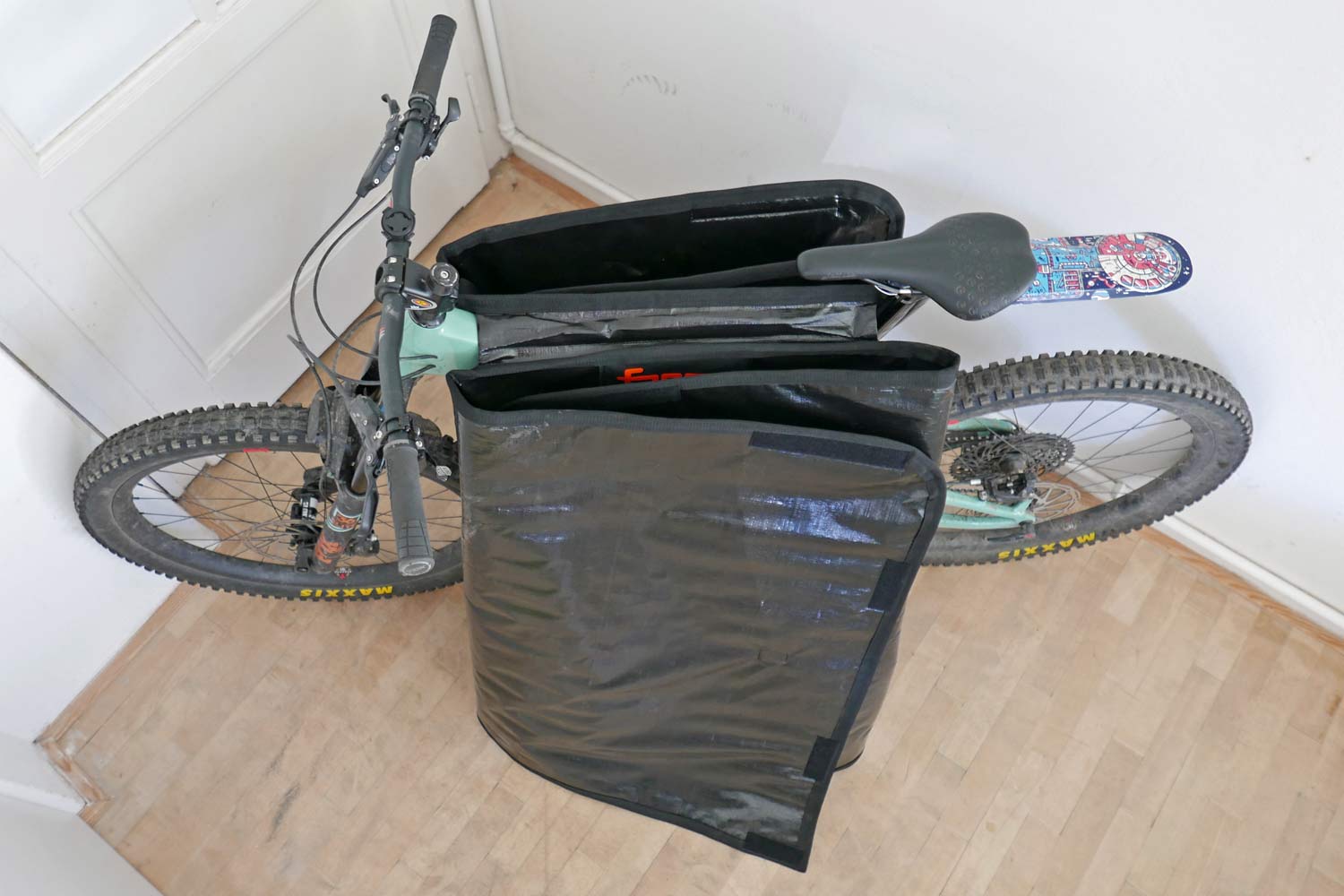 Like the Separator, the Defender is also designed to be tri-folded for more compact storage. But that also makes it easy to install. Fold the ends in, drape it over your top tube, then unfold both sides and stick the velcro pads together to secure it in place, with the Defender now protecting your bike completely. 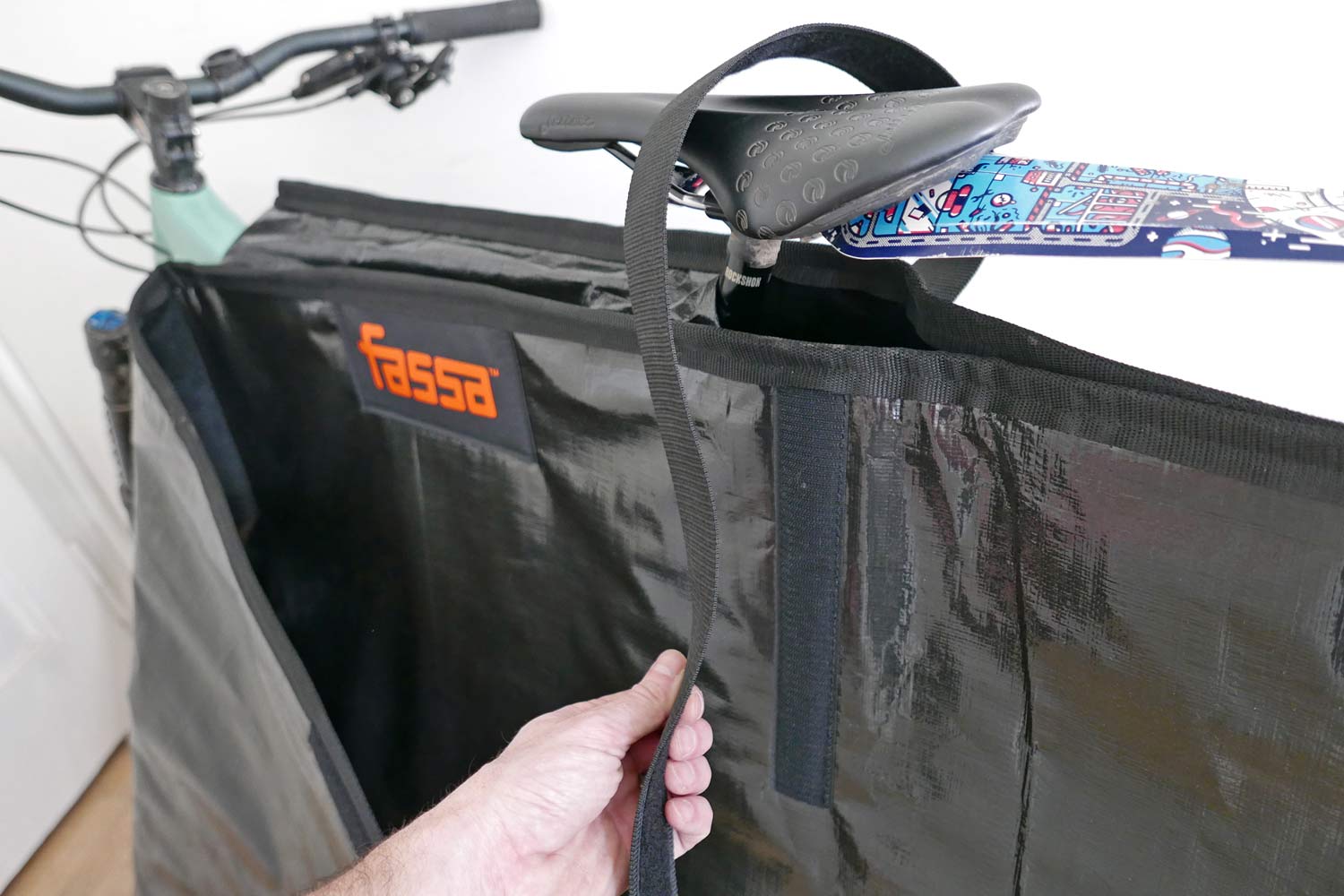 Just like the single-sided pad, you loop one long strap over the saddle & secure the velcro, and do the same thing with over the stem (or around the handlebar as needed). 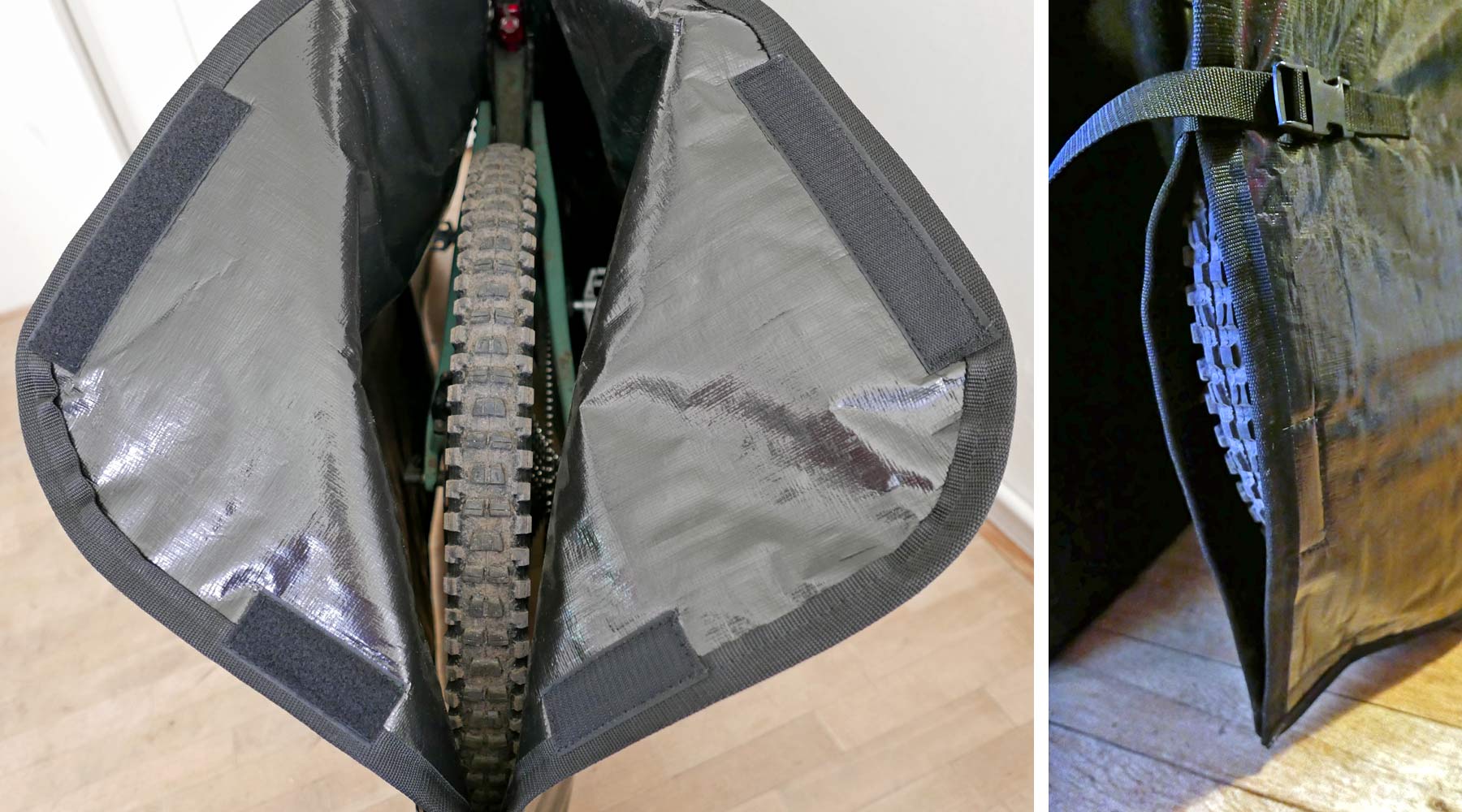 So how does it work?

Since bikes vary quite a lot in length depending on discipline, we had somewhat more mixed results with the Defender in practice. Once you secure the velcro at either end of the Defender, the pad didn’t allow for free rolling of the bike. And maneuvering the bike into a vehicle required additional lifting (vs. rolling.) In several cases with longer mid-travel trail bikes (>140mm), one wheel would stick out of the two-sided protection. Fassa added the straps & adjustable buckles in v2.0 to hold everything securely in place, but they limit how you can roll the bike with the Defender installed.

In the end, the required folding & unfolding, the nine extra velcro contact points, plus the buckles meant we were more likely to install the Defender on a bike we weren’t going to ride again for a week or more. Yes, it offers double the protection, but maybe with half of the convenience.

We still appreciate the protection of the Defender, and if you are stacking up more than two bikes or piling a bunch into a van, it will surely protect you from both sides. We didn’t use the Defender for any alternate pad or changing mat uses, but reckon it will do just as well, even folding out to double the size. 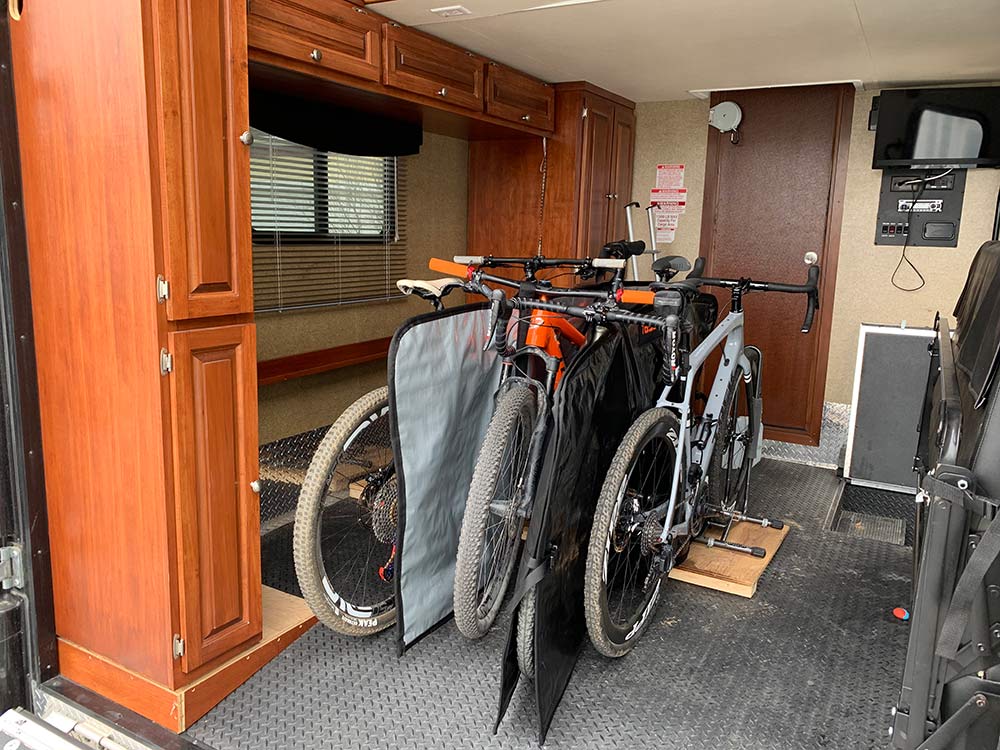 For the past few years, we’ve road tripped in our Class A toyhauler with up to seven bikes in the back. My carrying solution is a series of SuperStands bolted to a piece of wood in a staggered pattern and angled so the wheels roll into them. Which works great to keep the bikes from wandering, especially with a bungie cord run through the wheels to keep them close to the stands. The problem comes with the bikes rubbing together.

Getting that many bikes into a tight space means very careful pedal/crank orientation, but things still bounce around. Like Cory, I was using blankets or cardboard, but those would fall off or shift, thus losing any protective benefit. 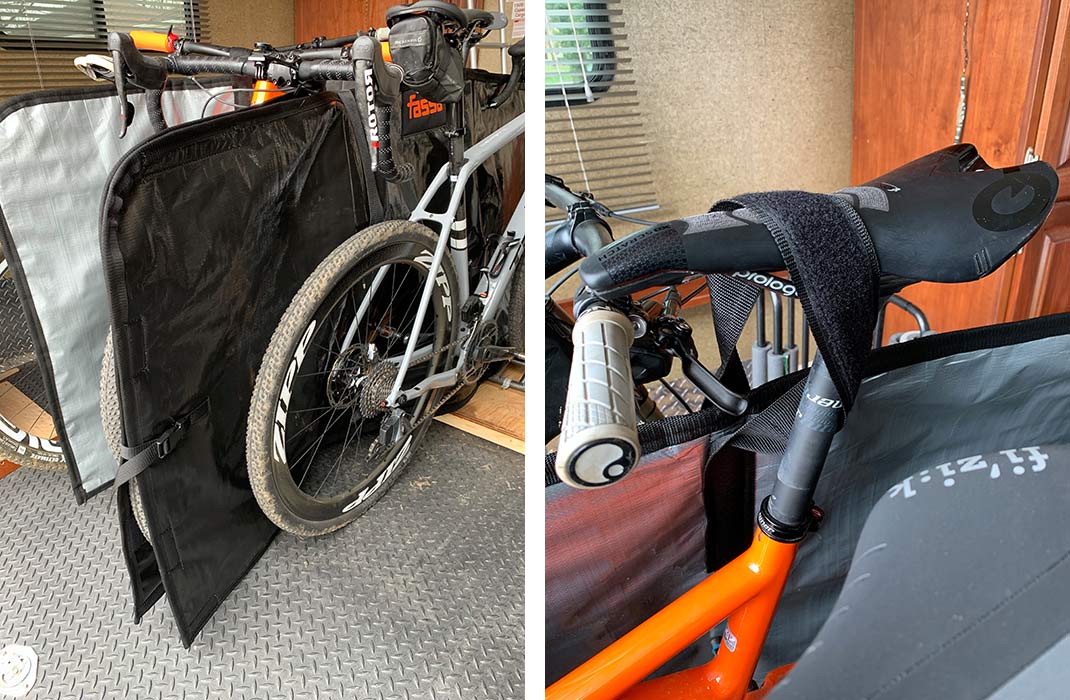 Both the Separator and Defender were a perfect solution for this. I also liked the Separator’s convenience of just sliding between two bikes, strapping it into place and moving on. The Defender adds more coverage and essentially gives you double the protection for not quite double the price… and you don’t have to strap it around the wheels… you could just drape it over a bike, and it’ll serve much of the same purpose.

These have become my go-to for RV trips now, and they stack against the wall easily to take up less space than a wadded up blanket when not in use. 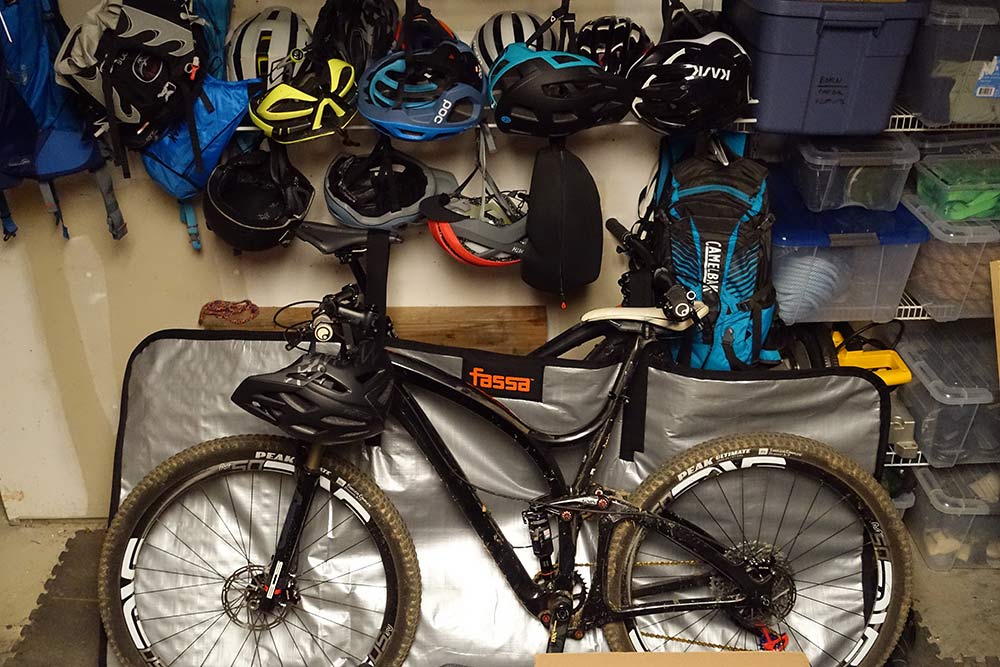 I also have kids, which are almost as expensive as having a giant RV. And they also like to toss bikes around so that they end up leaning against each other. So, when they’re not in the RV, the Fassa protectors are in the garage keeping my expensive carbon bikes away from the kids bikes, scooters, scrap wood, skateboards and all the other crap they like to drop wherever on their way in and out. Here, too, the Separator is easier. But for the money, personally, I’d go with the Defender because you don’t have to drape it over a bike… the upper straps mean you can use it just like a Separator when you want, but then you’ve got the extra (dual) protection when needed.

The other benefit I’ve found is, much like sliding a bike in or out of a hatchback or SUV, I can slide one bike out from between others more easily even when they’re stacked in a giant pile. 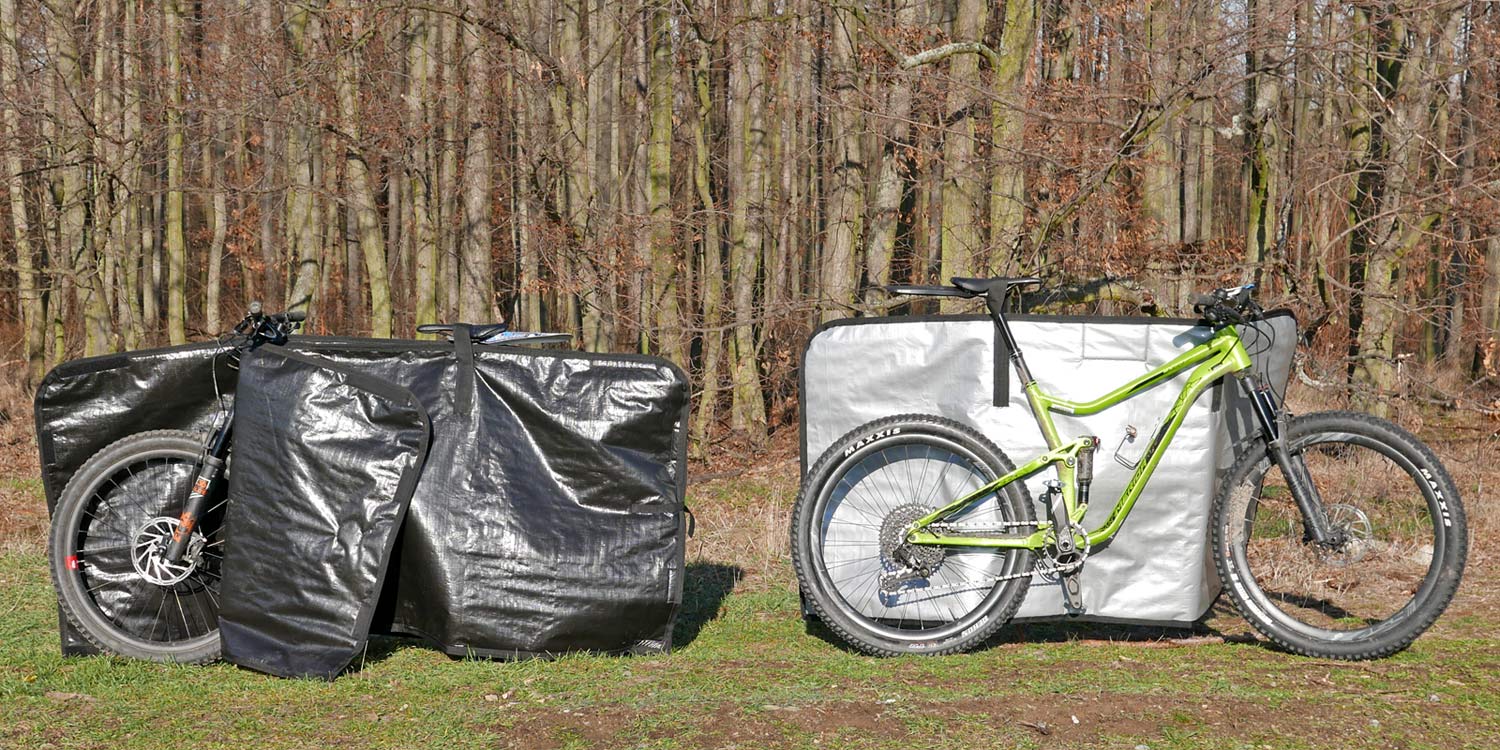 Both the Separator & Defender, with their dense foam padding construction, offer several degrees more protection than cheap alternatives, and are much more durable. They are more slippery with their ripstop PE fabric that makes them slide easily into place (and bikes to slide easily out) and are entirely waterproof & easy to clean. Plus, the way they quickly attach to the bike makes both easy to use, the single-sided Separator even more so.

If any of the situations above apply to you, £60-100 is a small price to pay for peace of mind and convenience.