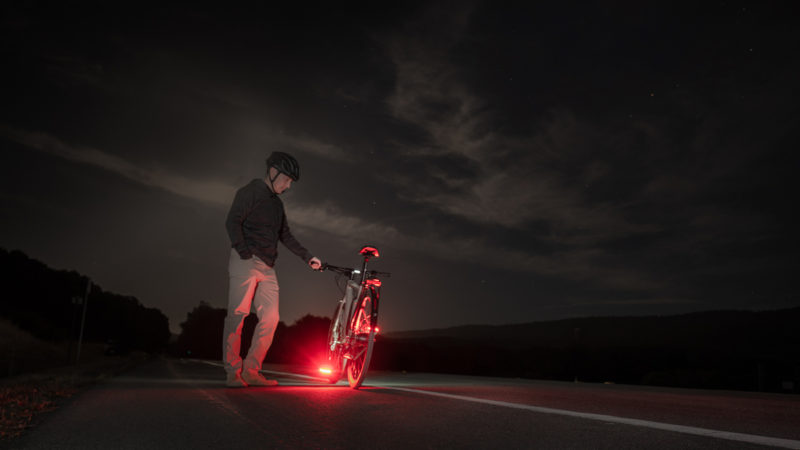 Redshift Sports, creators of performance cycling components for gravel and road, are expanding into the commuter safety market. Their focus? Increased cyclist visibility.

Introducing the new Arclight Pedals. These new illuminated pedals have some really cool “smart” design features that set them apart from a lot of other safety offerings out there that are currently available to cyclists. 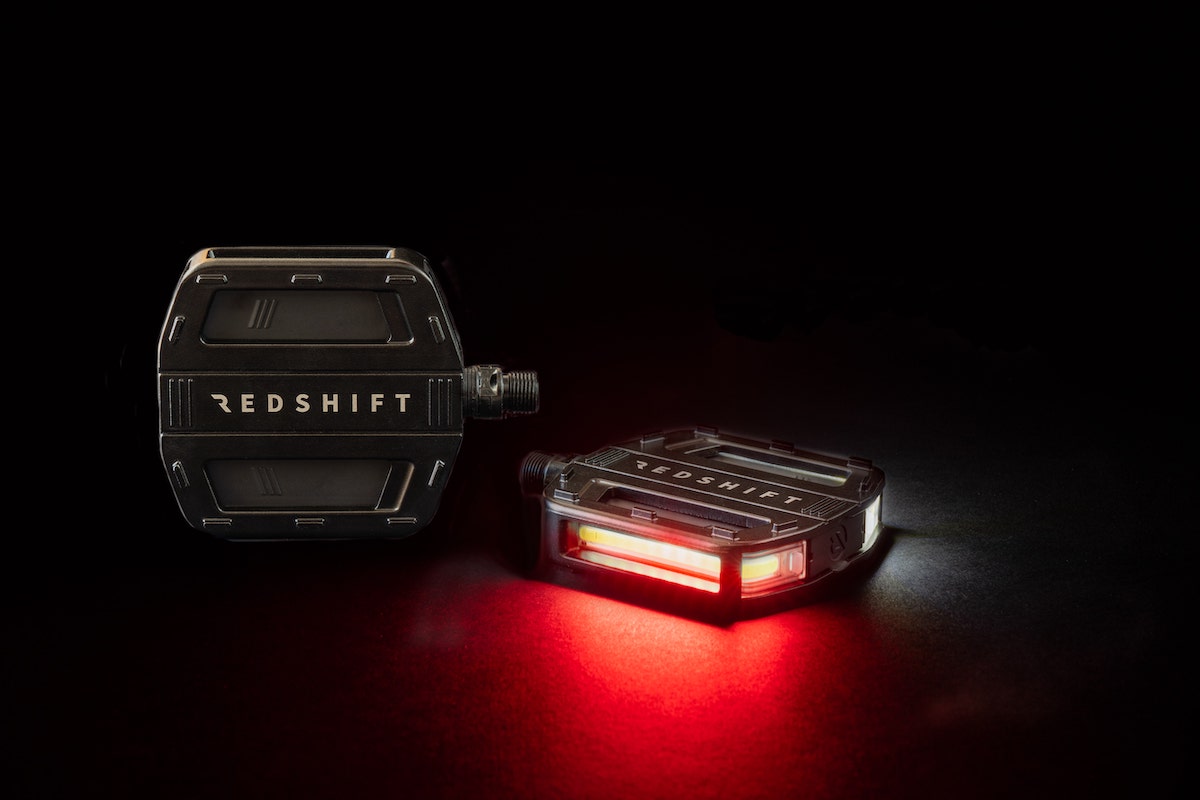 I picked up a pair of these pedals at the Sea Otter Classic in early April for review and have had them on my Rivendell Clem Smith Jr from the time I got home from the event. My Clem is my “commuter/all-around” bike that I use for just about everything. And I thought these pedals would be a good addition to this bike as I’m in traffic on a lot of my rides. 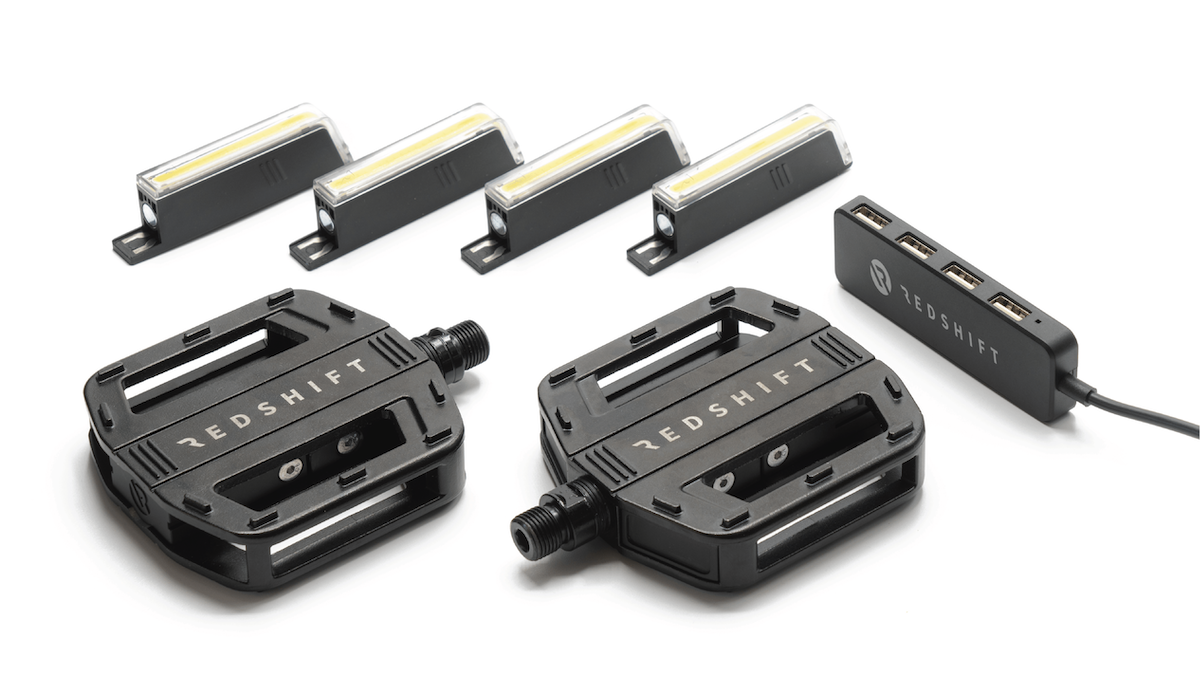 Photo: Redshift Sports… Inside the box

The pedals come with two pedals (obvi), four separate light pods, a USB charging hub so you can charge all four pods at once, and an easy-to-follow installation and care instructions. 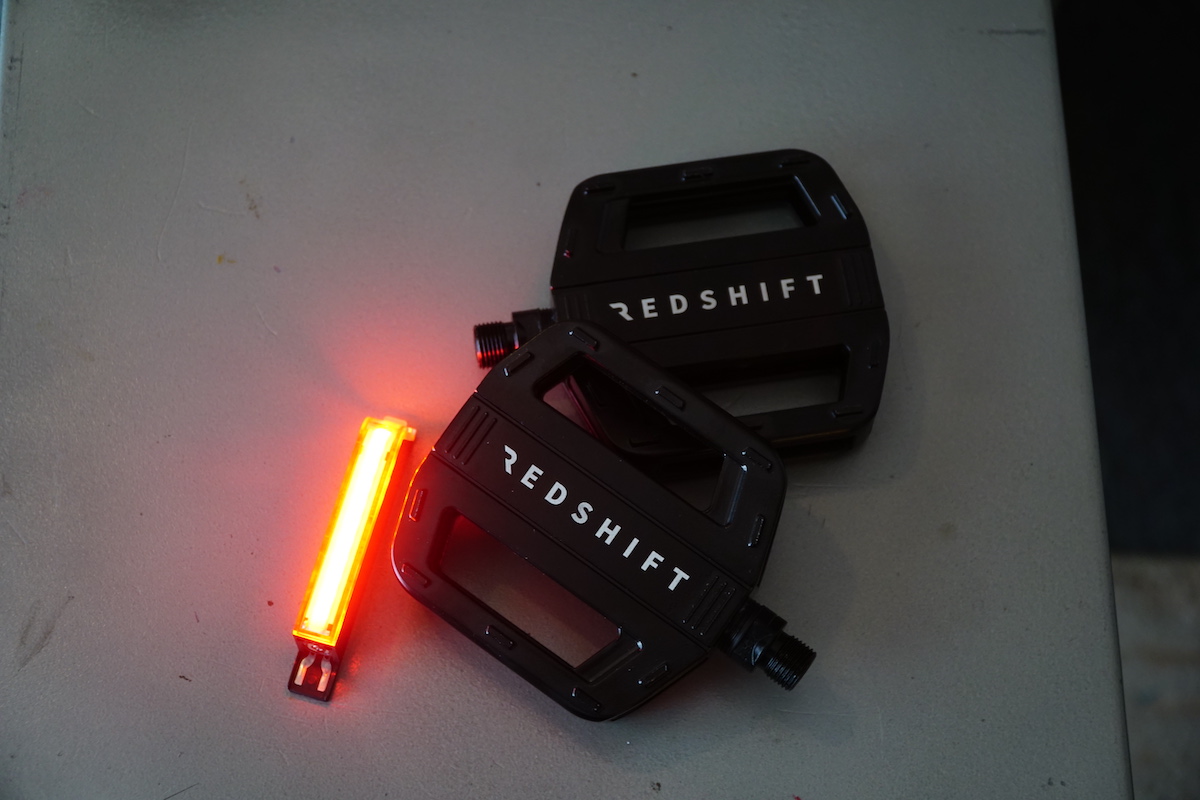 The light pods did come with a decent charge outta the box but should be topped off prior to use. At the end of the pod, you can see the lights built-in USB charging area. 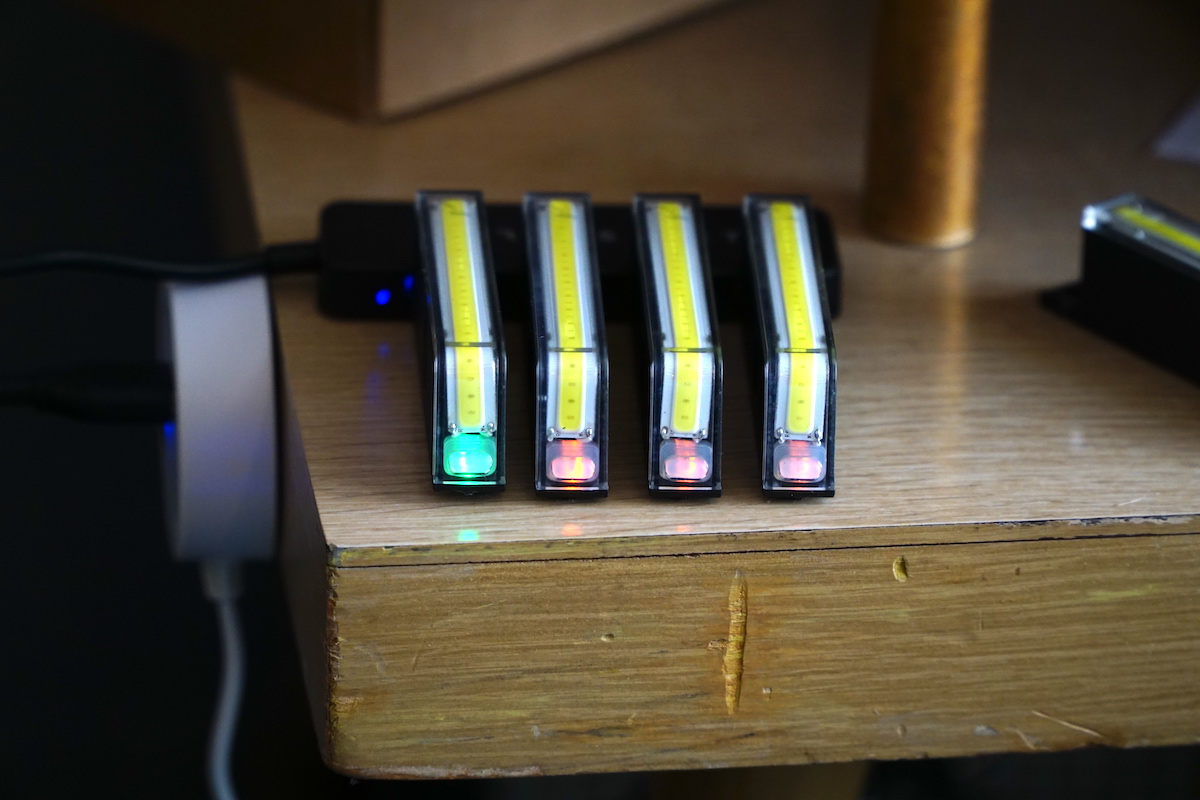 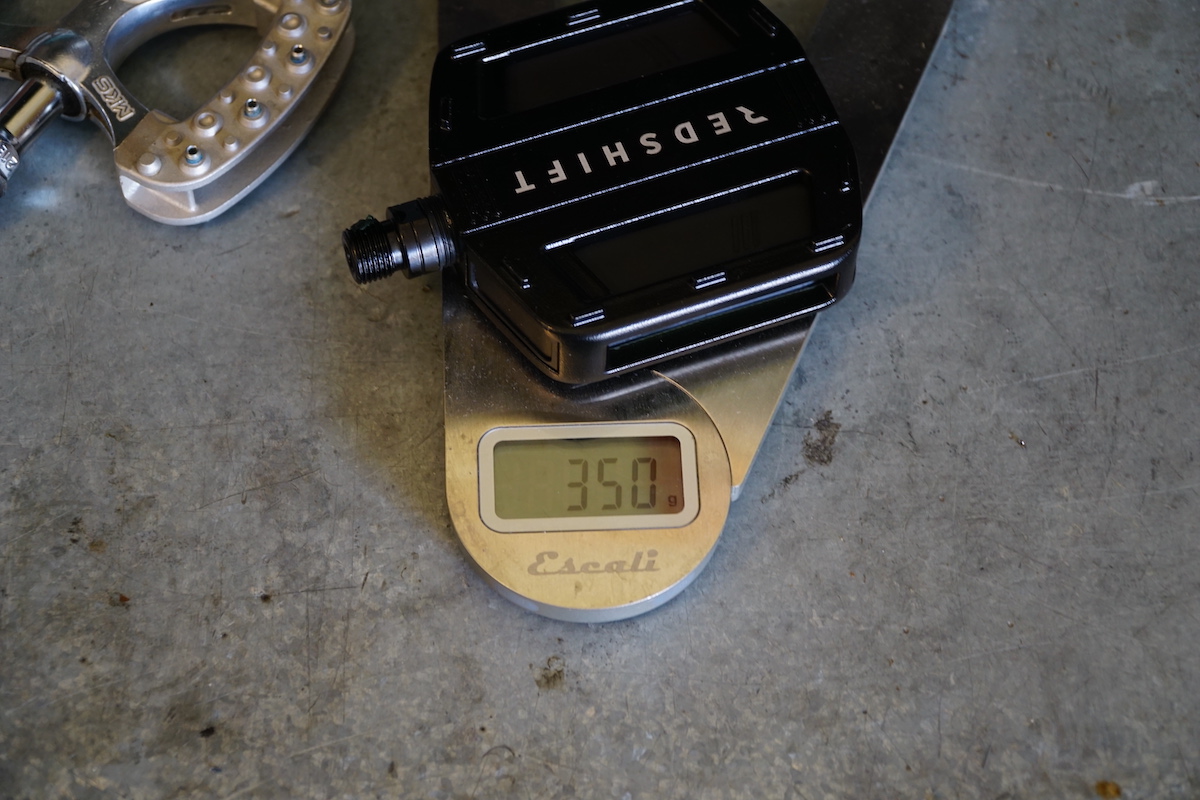 The Arclight pedals come in at 350 grams each with the light pods installed. 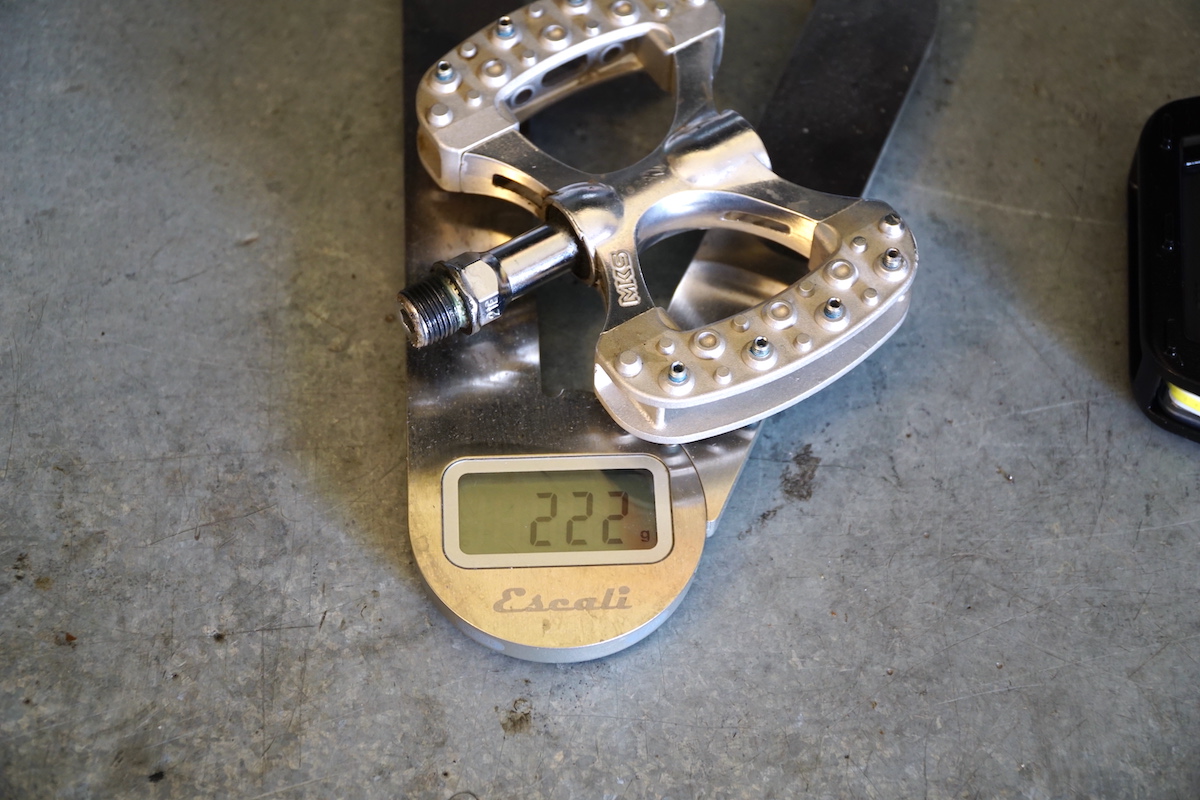 The weight of the MKS Monarch off of my Clem Smith Jr. is not an “apples to apples” comparison, just an FYI to satisfy the curious.

The Arclight pedals can be installed with a typical 15mm pedal wrench or 6mm allen wrench, and will fit on any crank arm with a 9/16 thread. As I was installing these pedals I found myself wishing they came in silver to match the aesthetics of my Clem Smith Jr.

The Arclight pedal, in black, installed.

The Arclight Pedals, Out and About

Although the platform was bigger, flatter, and a bit more comfortable than the MKS pedals, after the initial ride, I felt that the Arclight pedals should have a slightly more aggressive pin system on the platform. I didn’t have much of an issue with this during MY commuting and getting around town, but I always ride with a shoe that has a soft sole, and a decent tread pattern. That being said, I still didn’t have that positive “attached” feeling with these types of pins on the Arclights as I do with the MKS Monarch.

On the other hand, the Arclight pedals should be more shin-friendly for those times you catch yourself with the pedal while wrestling your bike out of the bike rack. 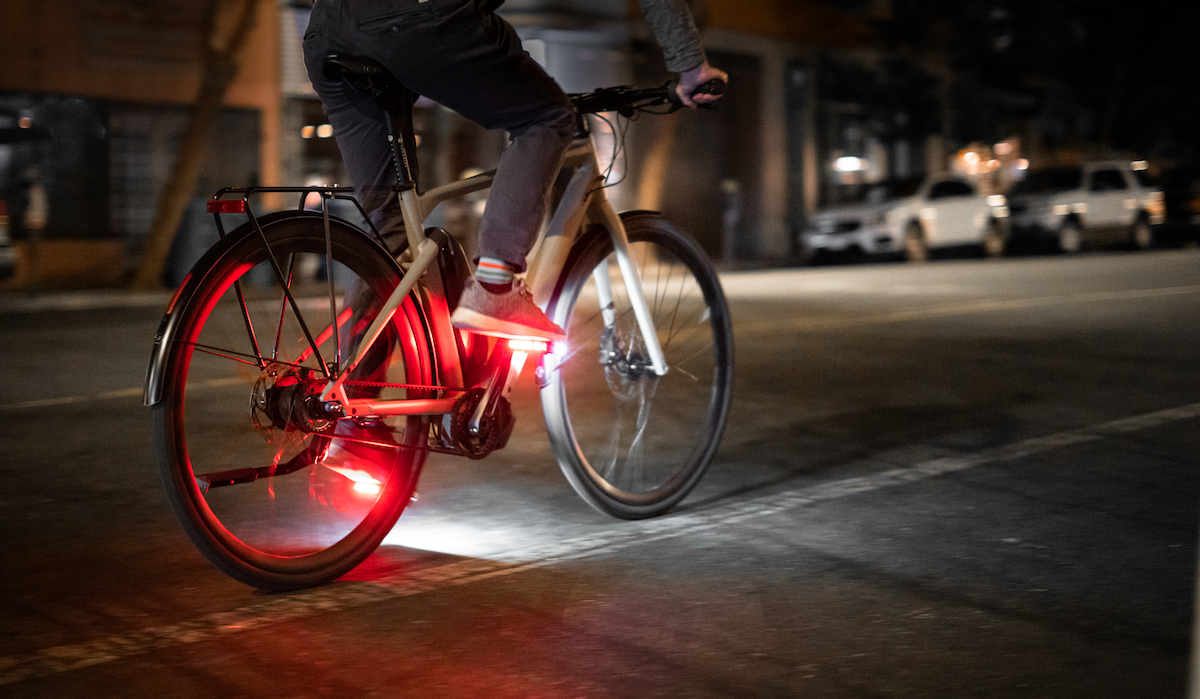 The Arclight pedals have a high-end look with a top-notch fit and finish. I have used the Arclight pedals daily over the past few months, and have had zero mechanical issues, and found the pedal itself to operate smoothly on its sealed bearings. And the light pods snap in and are held in place with a strong magnet, giving you a nice positive “snap” when sliding them into place.

Arclight Pedals on my Clem Smith Jr. at Dusk 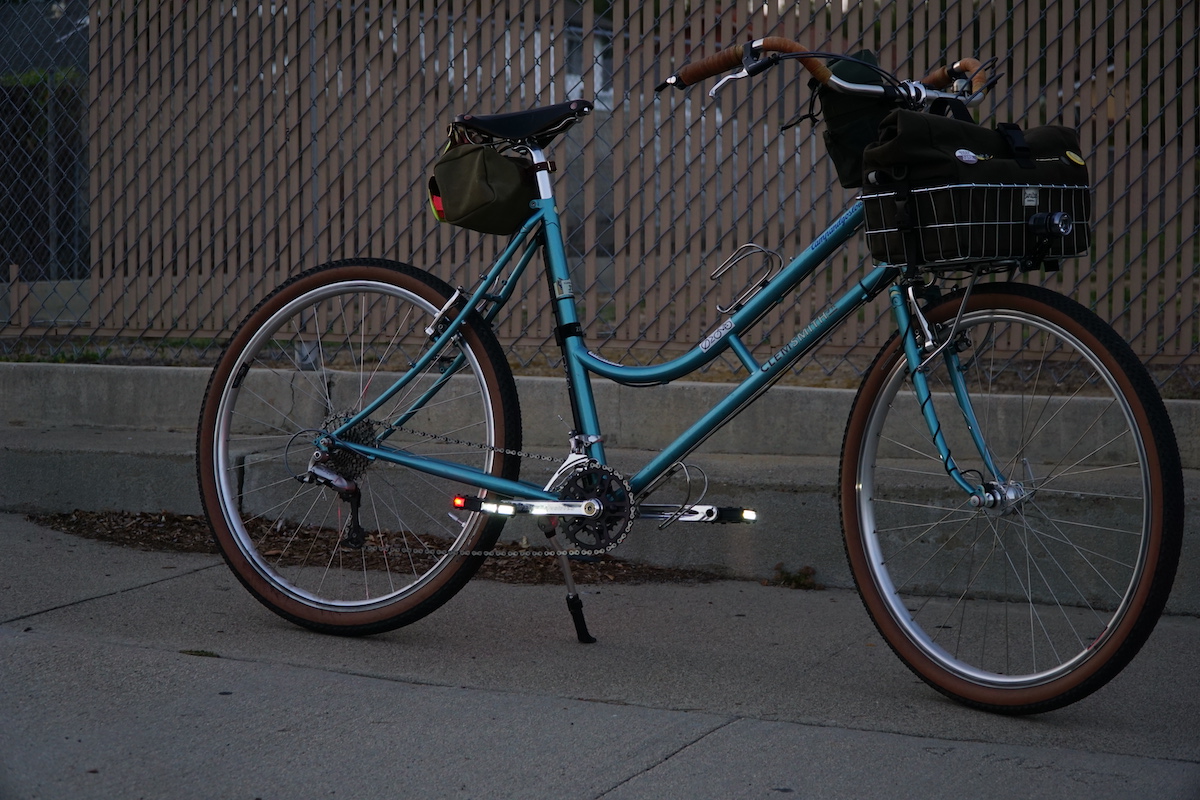 Archlight Pedals at dusk on the Clem, you can see the front light (white) and the rear (red) light of the pedals illuminated. 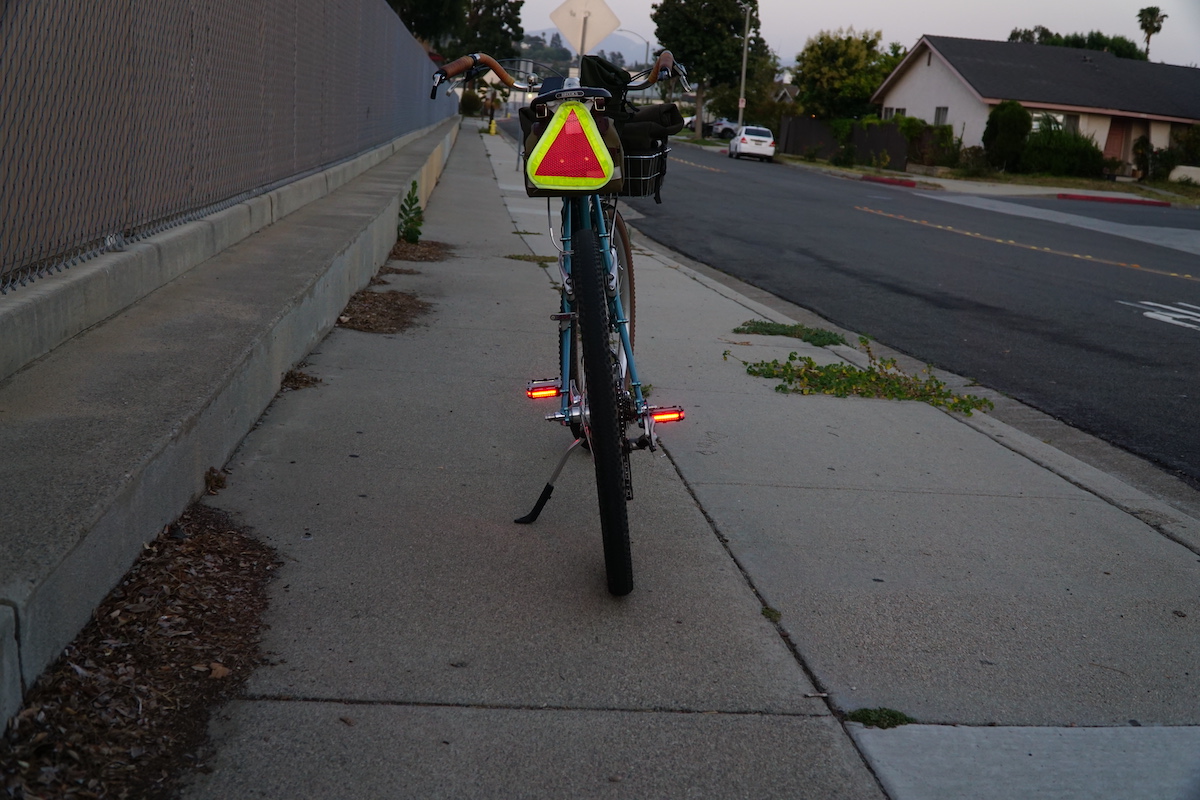 Arclight Pedals on my Clem Smith Jr. After Sunset 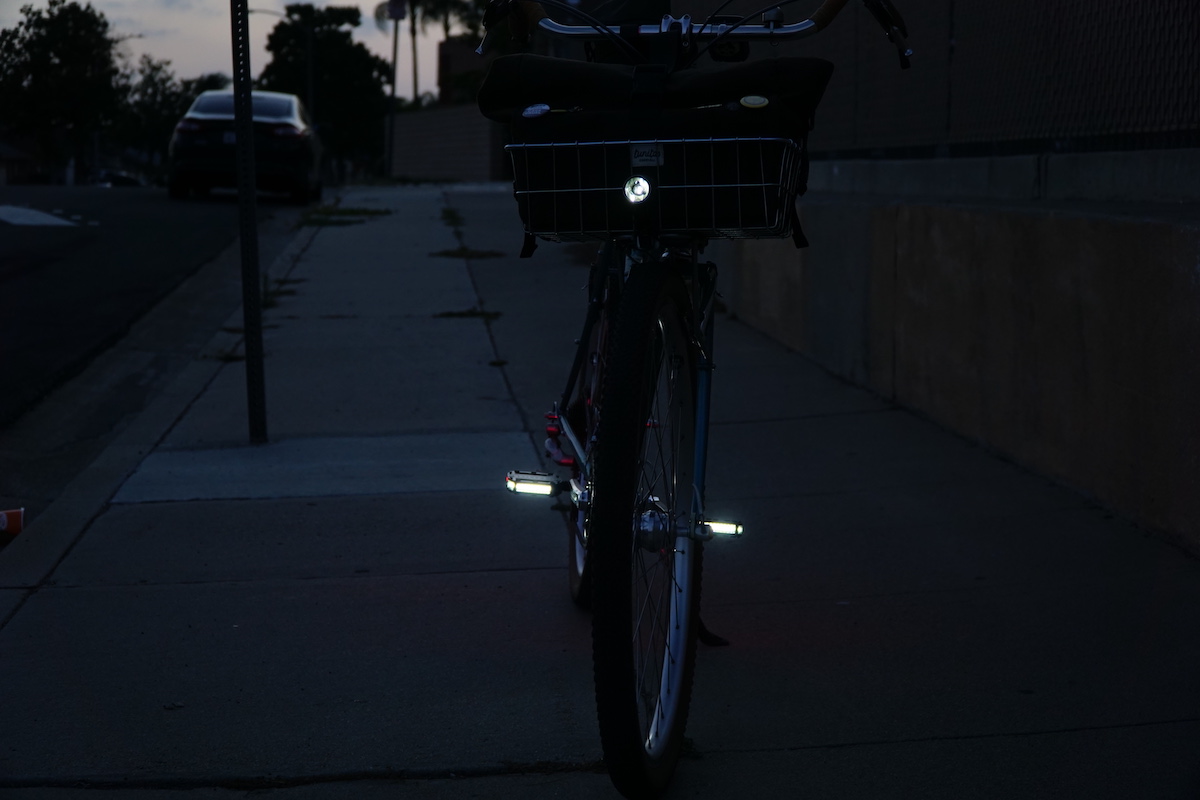 Front view of the Arclight Pedals after sunset. 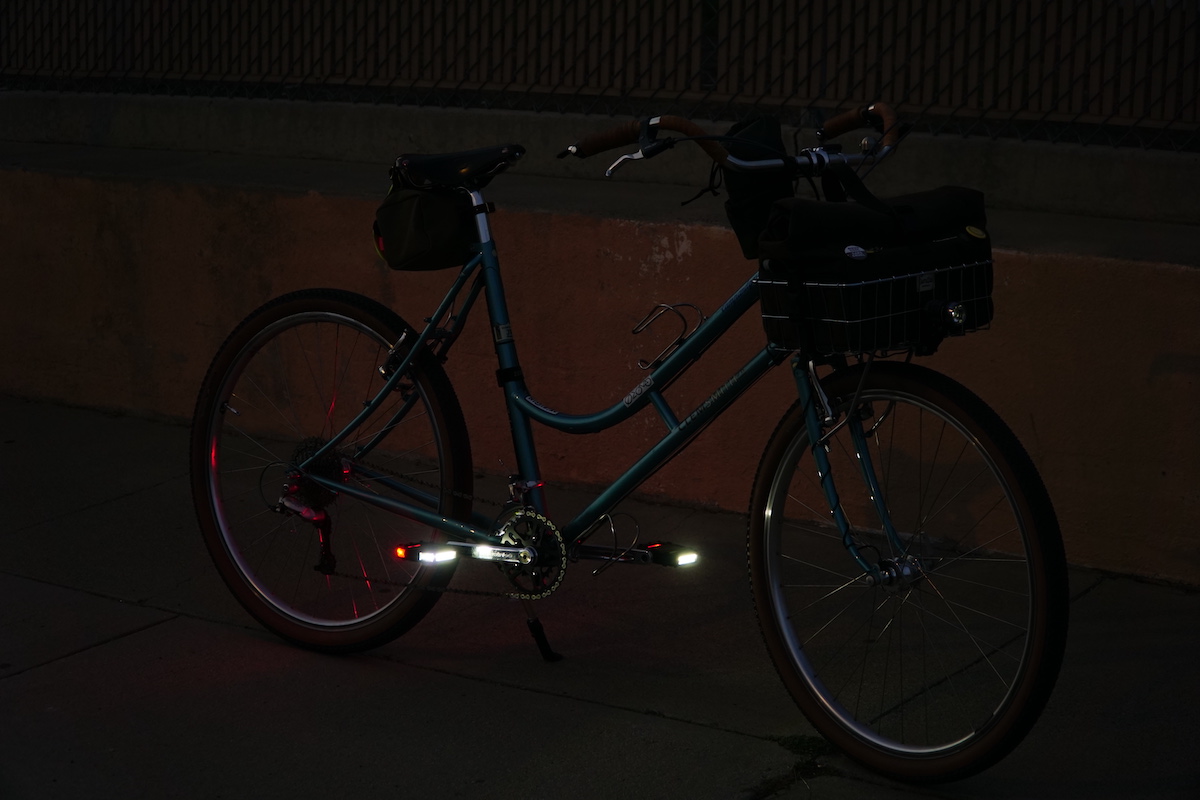 The arclight pedals really popping after the sun goes down! 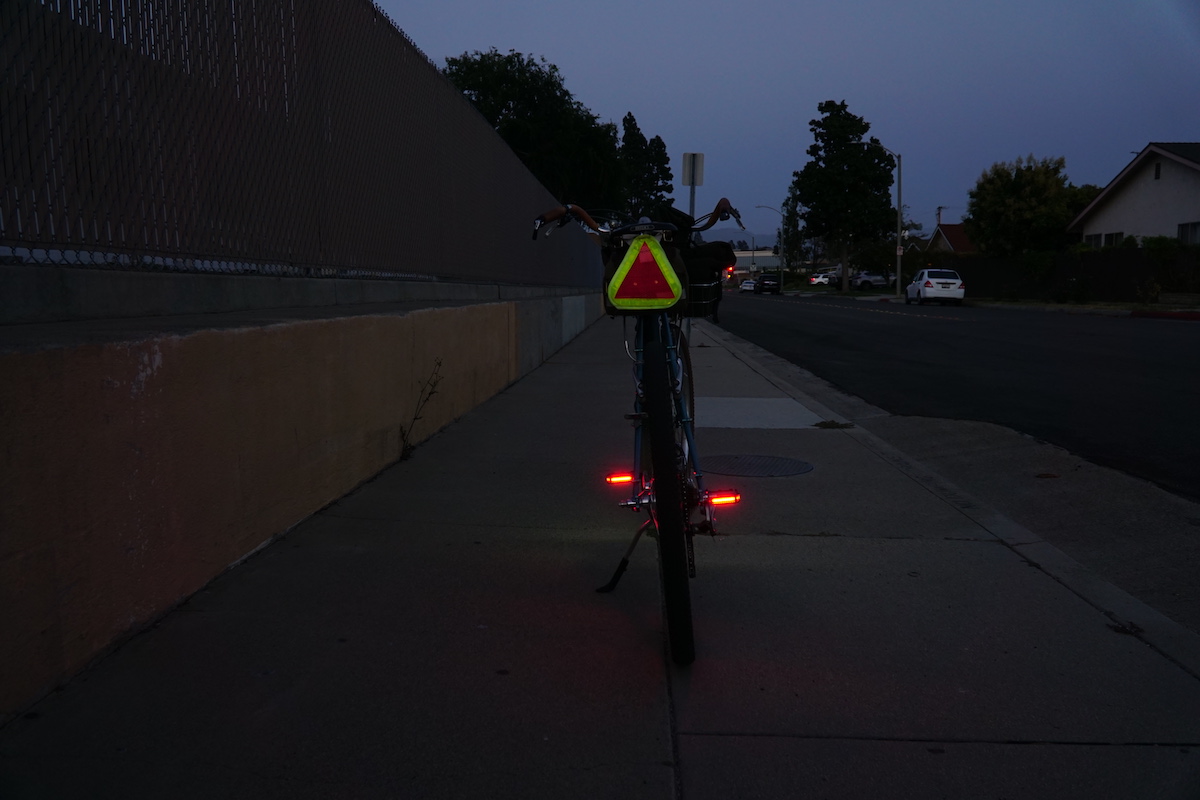 Rear shot of the Arclight Pedals after sunset.

The Arclights are packed with some clever features including an auto on/off function, and SmartSet sensors.

The auto on and off worked flawlessly during my testing. I would turn them on for my morning ride, and wouldn’t touch them again all day. All I had to do was slightly move the bike and the pedals would come on. My usage, “steady light setting and automatically turning on and off throughout the day” I found the battery lasting about a week… which would come out to appox. 3-4 hours of total usage for the week.

With the SmartSet sensors that are in the light pods, you could spin the pedal over and over again and when it stopped, the pedal would re-orient to white (front) and red(rear), everytime. That was a great feature, making sure you never have to worry about what light color is facing in what direction.

I ran the pedal lights on the steady mode every time I used them. I use a dynamo front and rear light on my Clem Smith Jr. and in combo, with these pedals, I felt very safe and very seen by motorists while riding at dusk or later in the evening. Even during the day, they are bright enough to be seen. Redshift states that the action of pedaling while the Arclight Pedals are illuminated will increase your visibility by 57% when compared to just riding with a front and rear light.

I believe that any measure taken towards improving cyclists’ safety, no matter the size, is a measure well taken. I did notice that while the pedals are on my bike, it seemed like more motorists were giving me the required 3′ when passing me on the road. At a point during one of my late dinner pickups, A motorist rolled down his passenger side window while we were at a stoplight, and said; “Man, there is a lot of light going on while approaching you from the rear, what are those?” He was referring to the pedals. After I told him what they were, he proclaimed, “What a neat product!”

I don’t have any scientific data to back this up, but I really did feel safer while using these pedals. And I think you get a really well-thought-out, reasonably priced product when purchasing the Arclight Pedals. If you are commuting or running errands anywhere near motorists, day or night, with soft-ish rubber-soled shoes, I would for sure recommend these pedals to you. RedShift could further improve the pedals by adding some traction pins, but there will be some riders that will prefer this version without pins.

Pre-ordering for the Arclight Pedals on the Redshift Sports website has been active for a bit, but they will be officially available on May 24th and will retail for $139.99

Great review Ron. Looks like a great product, like you I wish they came in silver for us retro grouches with all silver hardware. I wonder how grippy they’d be on wet conditions too.

Why not integrate a small dynamo in each pedal and be done with pesky and unsustainable cells?

That did exist at some point; https://www.amazon.co.uk/Pedalite-KPL200-Pedals/dp/B002C39XWY

Good idea, but way overpriced for most people.

Uh, these are actually really reasonable considering. Have you seen what bikes and parts are fetching these days? The price complaint is the lowest common denominator here, I think the bigger concern is how well will these hold up to an average Portland winter? Think wet city use.