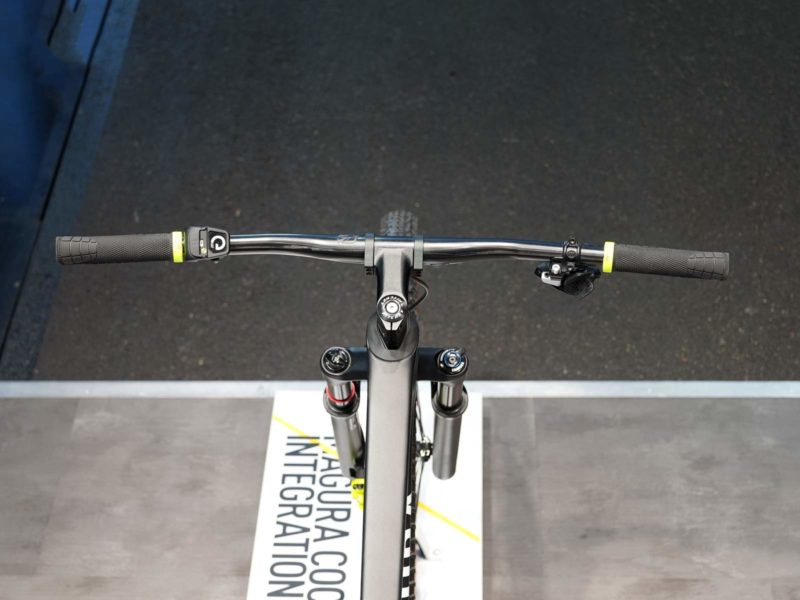 Some of these things may look familiar, but the devil’s in the details with updates and new versions of brakes and systems from Magura, Galfer, and BluBrake. We even spotted a new floating rotor from Czech brand GOLDfrens and some quick-connect solutions from Zeno…plus, a “trailer brake” for your kid hauler! 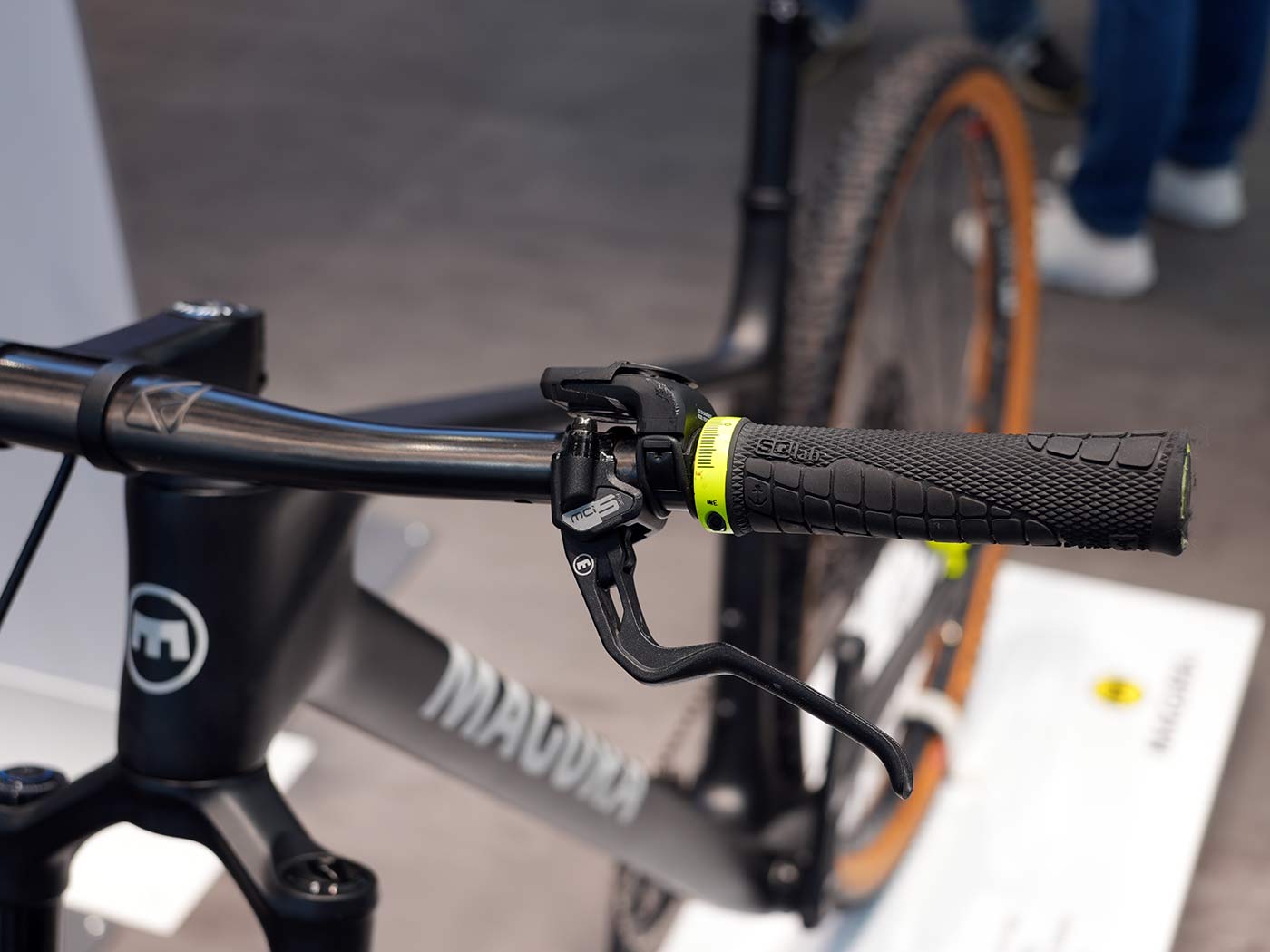 We spotted Magura’s iC (Integrated Concept) cockpit before, which hides the brake lever’s master cylinder and hoses inside the handlebar. Thus far, they say this integrated cockpit is in use in two bikes from Kalkhoff and Porsche , but that it’ll get onto more mainstream bikes in the coming years.

The holdup, of course, is that it requires a specific handlebar and headset, but with more and more bikes already spec’ing the oversized headset systems from brands like FSA and Token, we suspect they’ll be more open to a fully hidden system like this.

Bigger picture, another challenge for a brand like Magura is global support for their brakes. Where Shimano and SRAM have solid global supply chains for brake pads, brake fluid, and most replacement parts, Magura might not, which makes bike product managers less likely to spec their brand. But we could see plenty of German brands and boutique makers offering this in select markets. 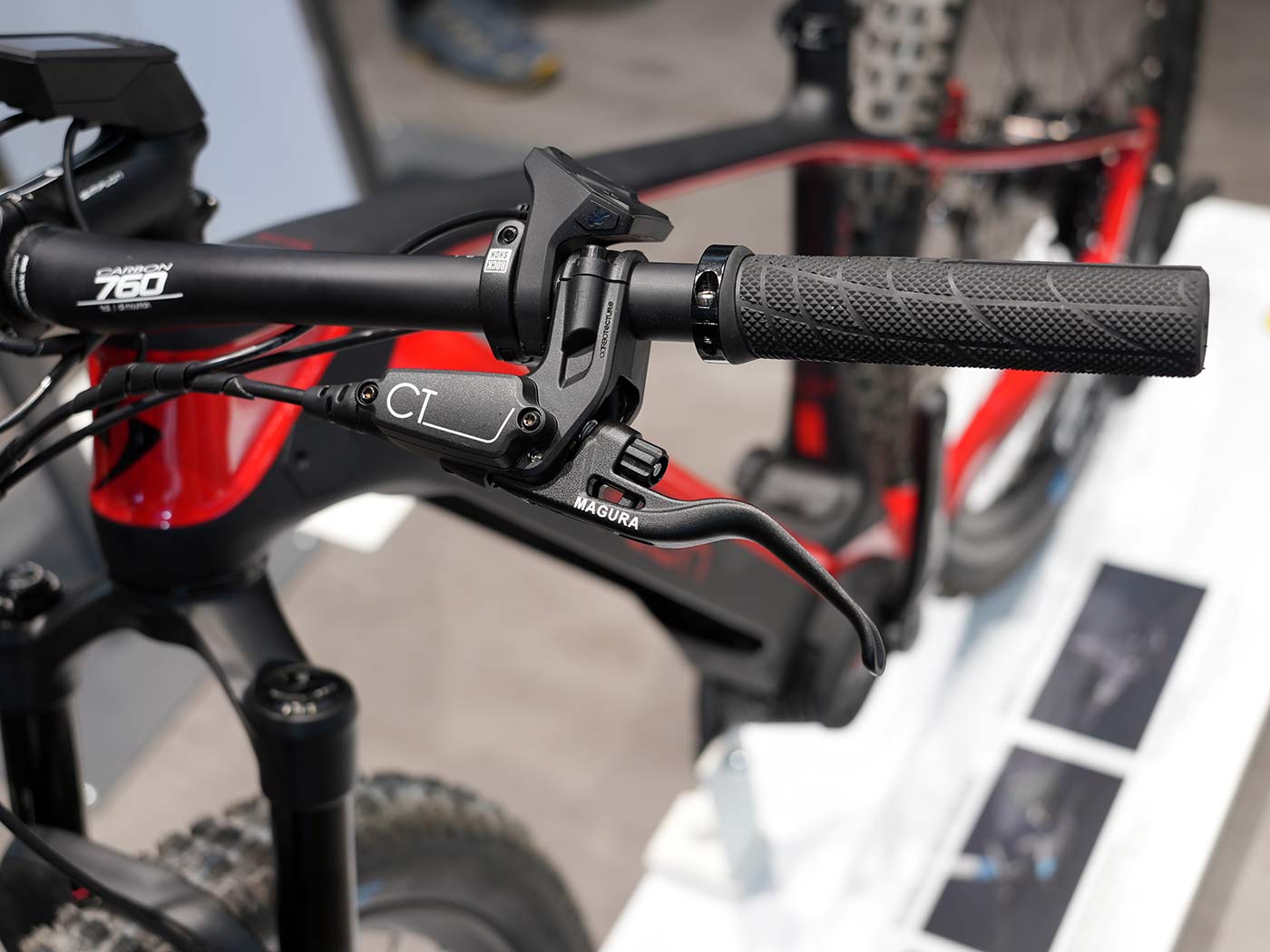 More likely to be spotted on a production bike in the near term are the new CT4 2-piston and CT5 4-piston brakes. They’re built on Magura’s MT4 caliper but with new CT master cylinder and lever that has a larger reservoir for better durability and longevity between service intervals.

That means it has their Carbotecture composite body, with alloy or carbotecture levers, with multiple lever sizes and shapes available, just like their MTB brakes. It’s aimed at the e-bike crowd, both for city/commuter and eMTB models. MSRP ranges from €130-170 per wheel.

Not shown, there’s also a new €60 MDR-P CL center lock version of their 2-piece rotor for DH and eMTB 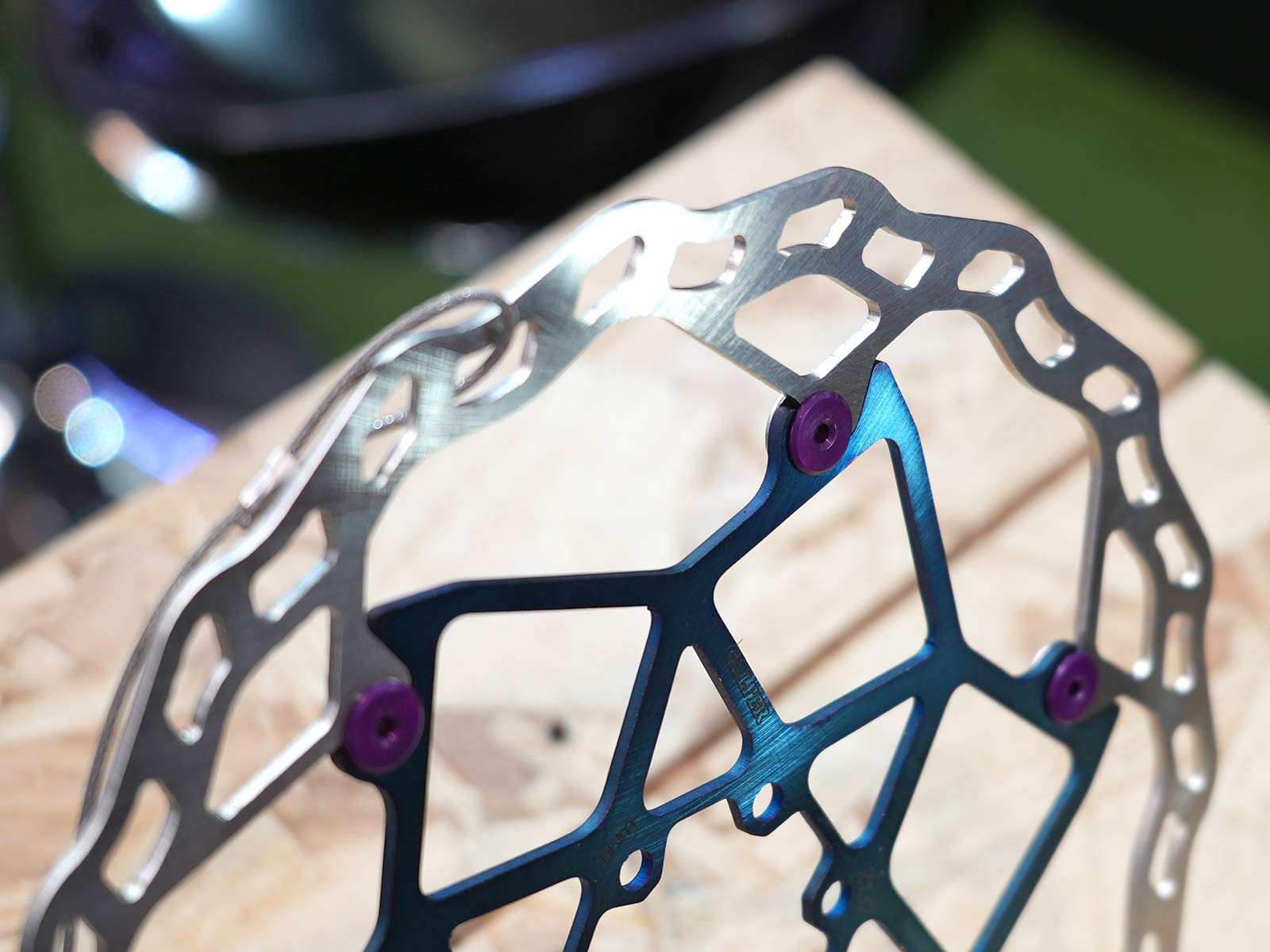 We reviewed Galfer’s floating disc brake rotors a few years ago and really liked their performance matched with their brake pads. Now, they’ve updated the design with a leaner, more geometric shape. The differences are subtle, but Galfer says the result is a lighter weight rotor that’s also stronger.

The joint geometry between the two pieces is also new, and the braking surface thickness has increased from 1.8mm to 2.0mm. Lastly, they’ll finally be available in more and better color options. The purple you see here is only to denote it’s a prototype, but production options include a black spider with green, red, blue, gold, or orange pins… or opt for this “blue titanium nitride steel” center with black pins.

Both are available in 180mm and 203mm 6-bolt versions, but they’re teasing a 223mm option coming soon. 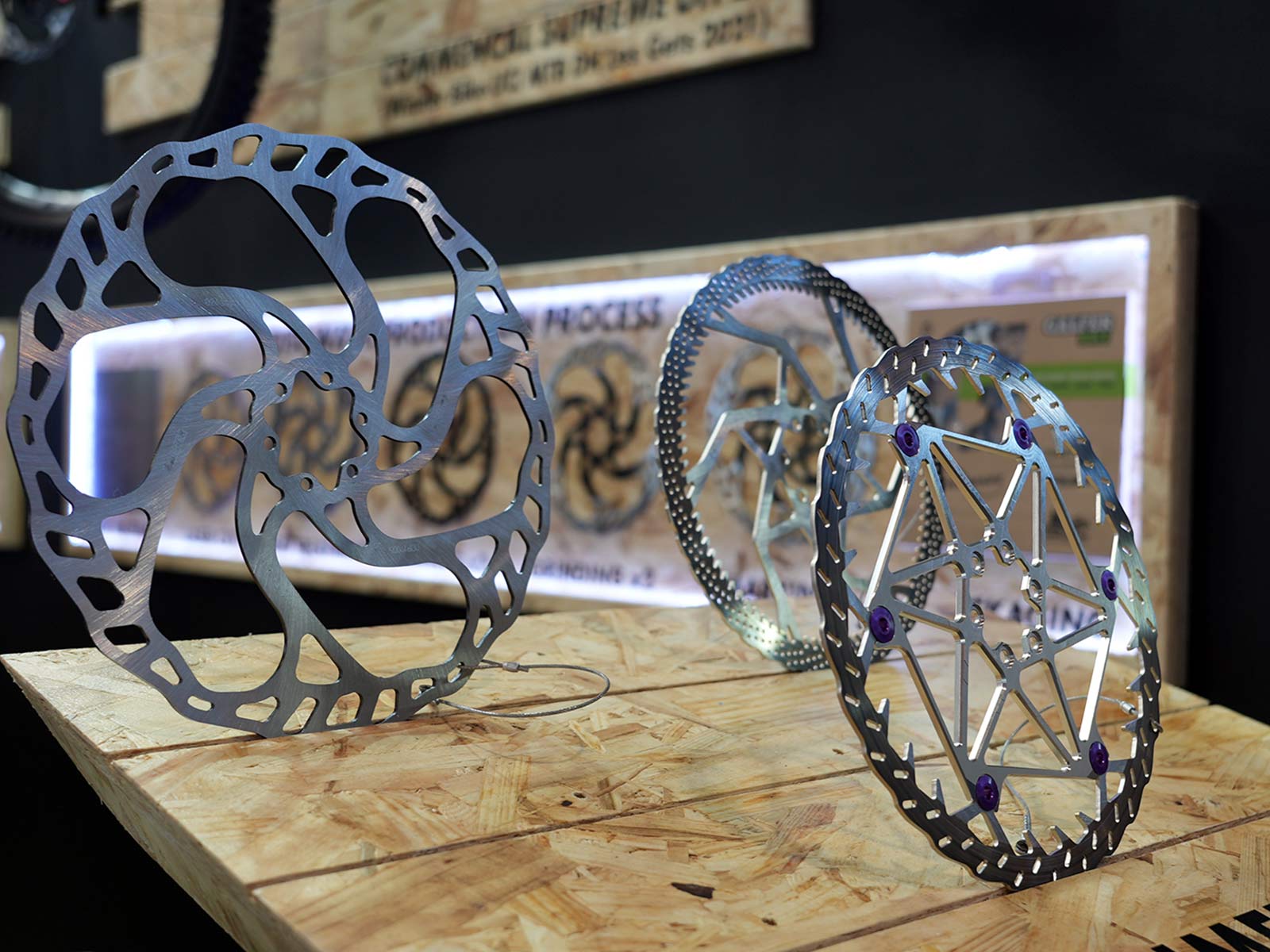 And that front floating finned rotor? Pure prototype for now… Check out the current lineup at GalferUSA.com.

GOLDfrens has a new floating rotor, too 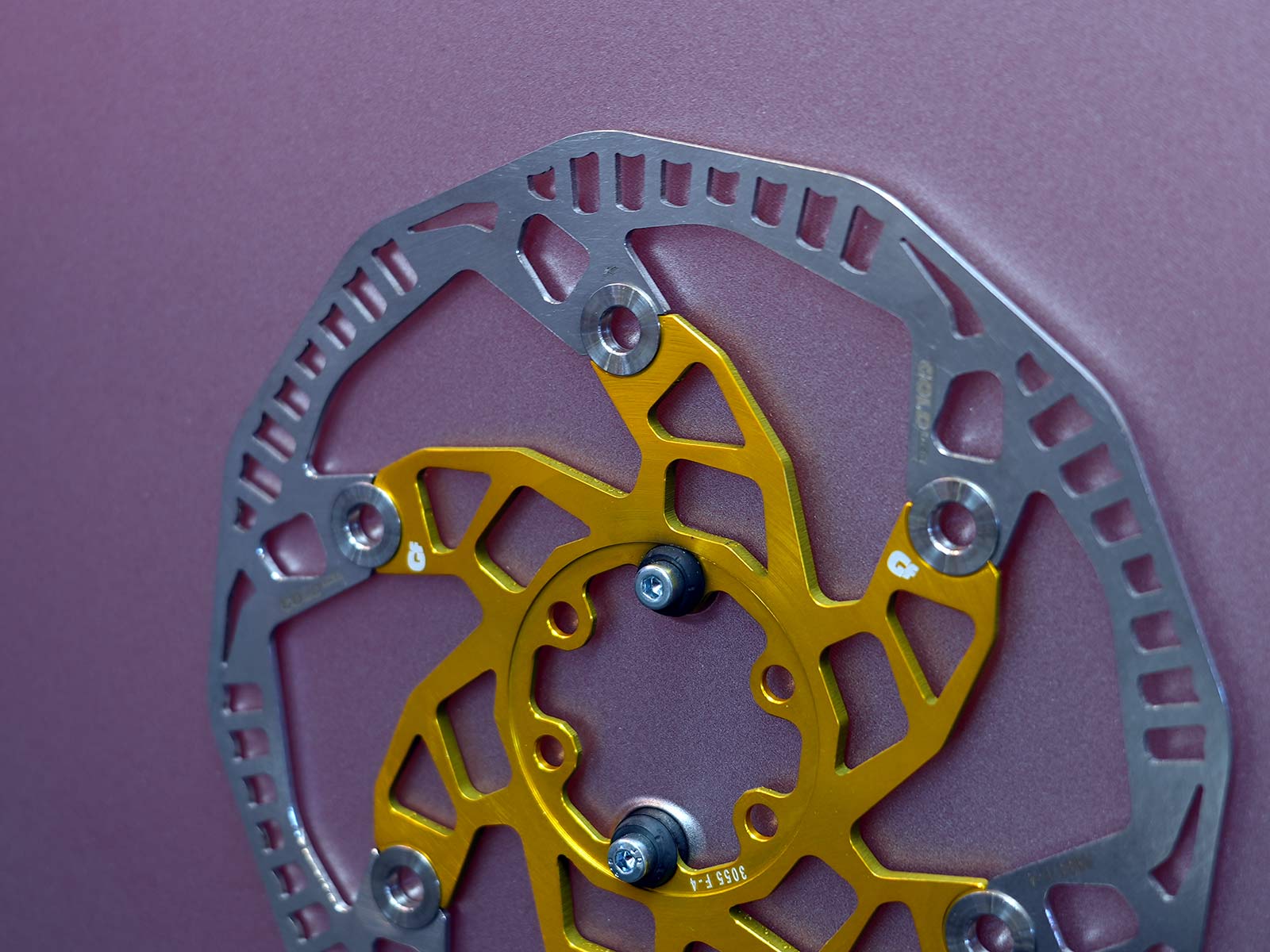 The new GOLDfrenz 203mm floating disc brake rotor weighs in at a claimed 168g, and sells for €59. It’s available now in 203, 180, and 160mm sizes, but only by email. They’re made in the Czech Republic by the small family-run company with decades in Moto brakes. Unfortunately, there’s zero additional info on their Czech website (even for their current MTB rotors or pads…just that they make them). And their US website doesn’t carry MTB stuff. 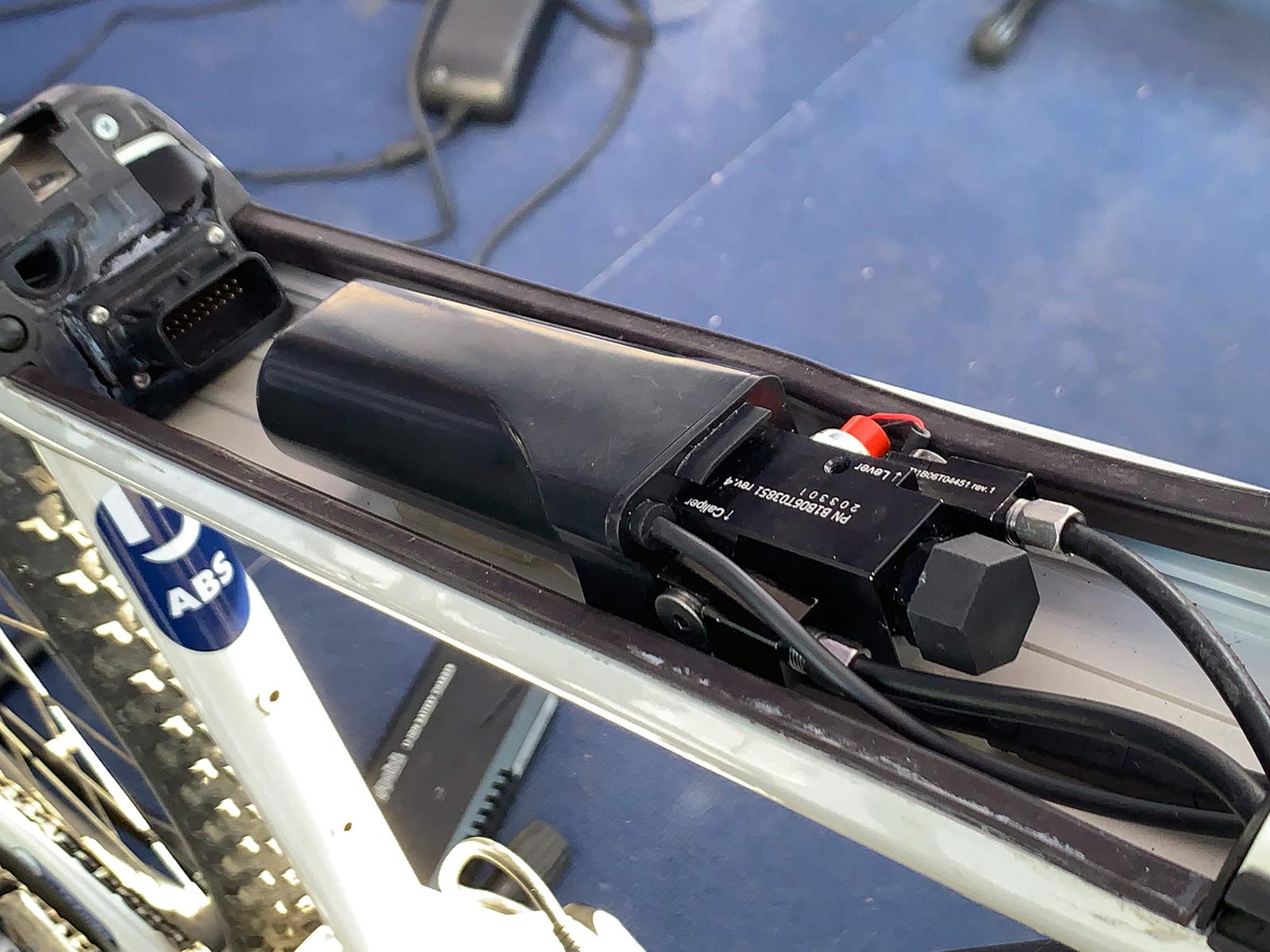 BluBrake was one of the first to offer an antilock braking system for e-bikes (Bosch is the other main provider), but their original system was bulky. Now, they’ve slimmed it down enough to fit inside a (albeit large) top tube or elsewhere inside the frame. 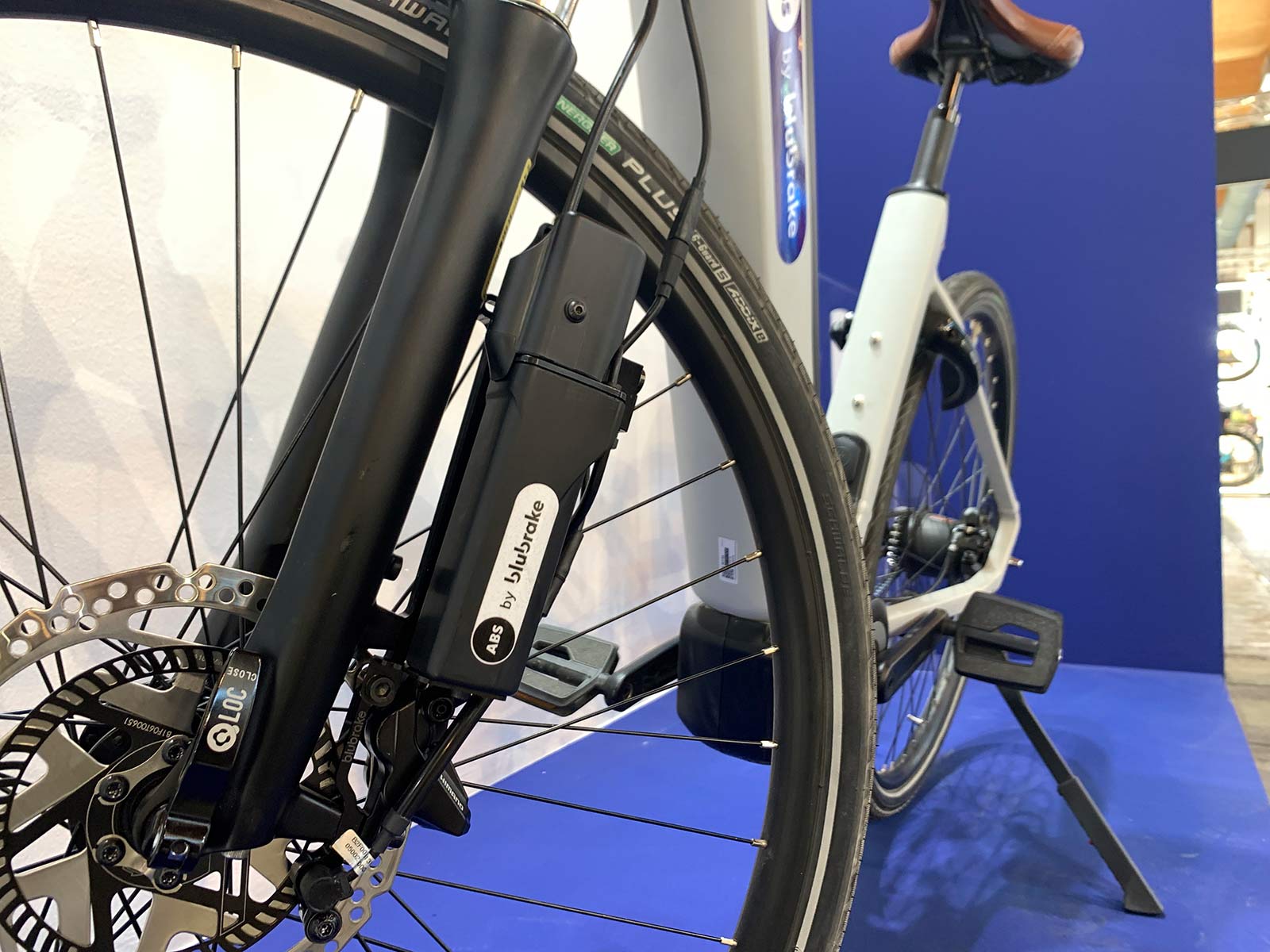 Or, on the back of the fork leg, which is probably one reason that new Fox AWL eSUV fork has those tabs on it.

The system uses a secondary ring on the brake rotor to measure wheel speed and taps into the hydraulic lines to manage braking power so you can’t lock up the front wheel and lose control. There’s a small indicator light on the handlebar that blinks if it’s working, which seems superfluous to us.

We gave it a test spin and it does indeed work as promised. We were able to grab the lever tight and the bike slowed quickly but without drama, even on loose gravel surfaces. The downside for performance cyclists is that it makes the brakes feel underpowered, like they need a fresh bleed. But given that they’re aimed at casual riders who just want a safer cycling experience, and that it’s still going to be bulky and heavy, we wouldn’t worry about these showing up on high-performance eMTB or eRoad/Gravel bikes anytime soon. 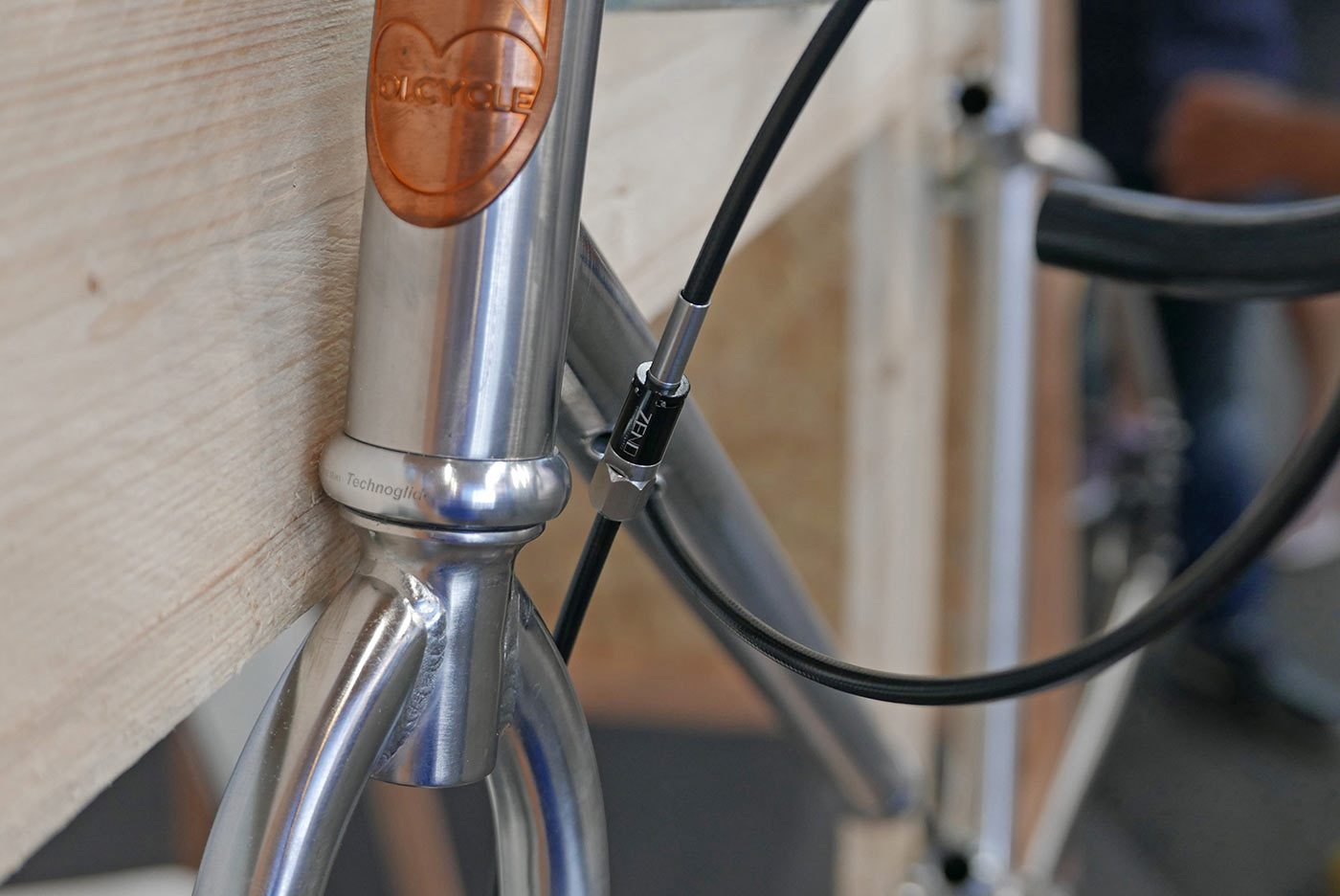 One of the tricks of integrating all these hydraulic brakes and systems is that you have to run those hoses through ports, holes, and tubes…without going mad. But mostly, once the bike’s built, you can forget about them. Not so for travel bikes…

The inline connectors can be installed at the lever for flat bar brakes, or anywhere in the middle of the lines for drop bar brakes. With a closed oil circuit even when disconnected, cyclists can split their brake lines for travel, making it easy to remove a handlebar to pack your bike, or even split a frame in two for those riding foldable bikes or frames with S&S couplers or similar.

The ZENO Q-Connector Lite hydraulic quick connectors are rated for up to 4500psi internally, meaning they are unaffected by pressure differences from air travel or even someone pulling on the brake lever. There is even the possibility to add in an inline barrel adjuster that can potentially tune the feel of your closed braking system. The whole setup is installed without olives or barbs, and is open & closed by hand with thumbscrews or pinned connectors. Q-Connector Lite should be commercially available in early 2022. 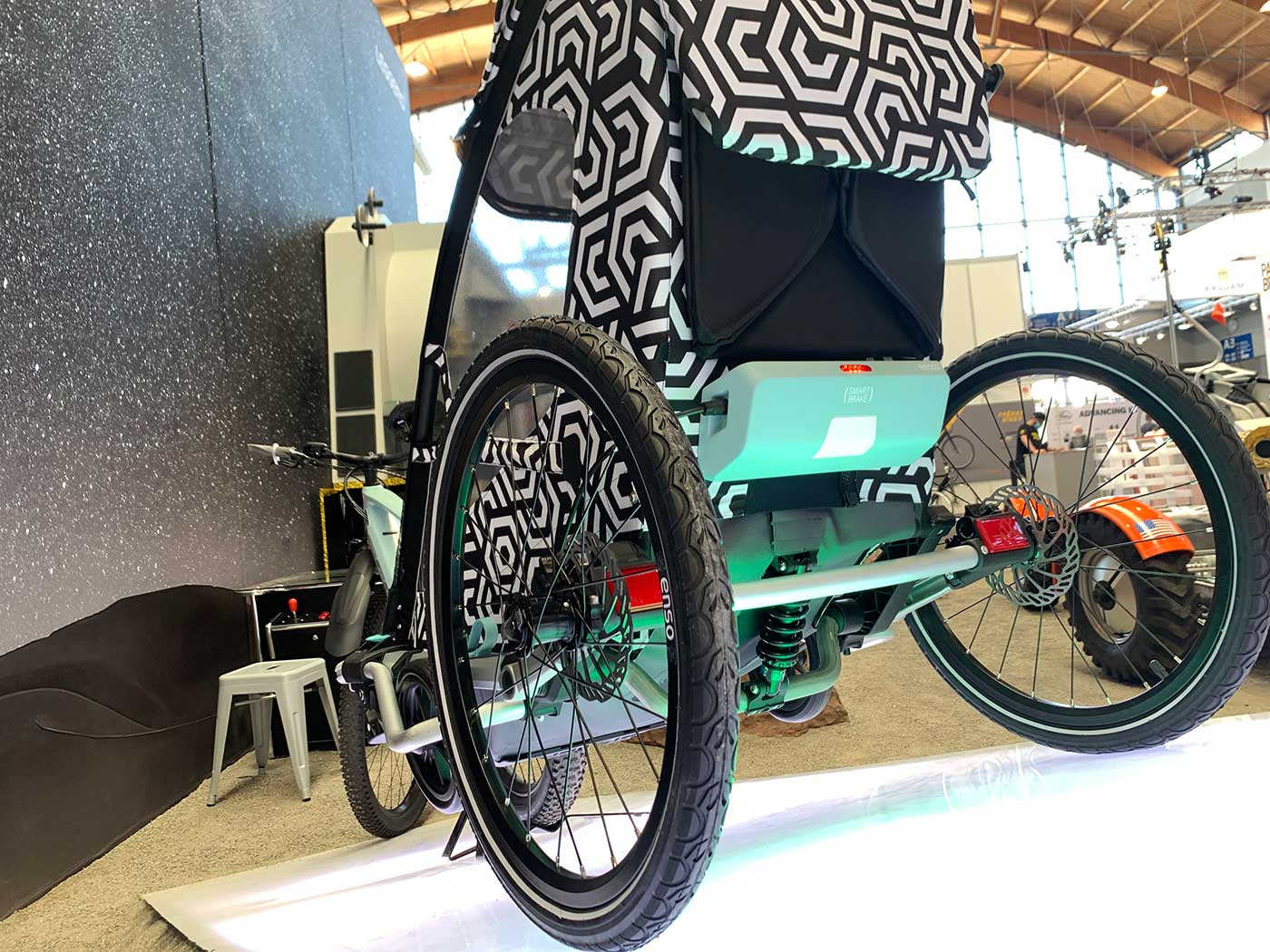 Swedish brand Leggero makes some very, very nice kid trailers. The problem, they found, is that kids are heavy, and when you need to brake hard, the extra weight can throw off your handling and potentially cause you to lose control. Their solution is this Overrun auto-braking concept, which puts a control box on the back of the carrier…

…and a sensor inside the connector beam. When it detects that the trailer is no longer being pulled and is starting to push the bike, it activates the hydraulic disc brakes so that the trailer is slowing itself at a similar rate to the bike. It’s a concept for now, but it makes a lot of sense and we could see this gaining momentum. Of course, using all that new drive-by-wire tech that bikes are picking up on, it may not be long before your bike’s brakes simply send a wireless signal directly to the trailer’s brakes (or motors!).

MORE EUROBIKE: Check out updated Hayes Dominion brakes from Eurobike 2021, too. And see all of our Eurobike 2021 coverage here.

Excited for the Zeno hydraulic quick-disconnect fittings. Was hoping there’d be some sort of price attached to them, but I guess we’ll have to wait for updates.