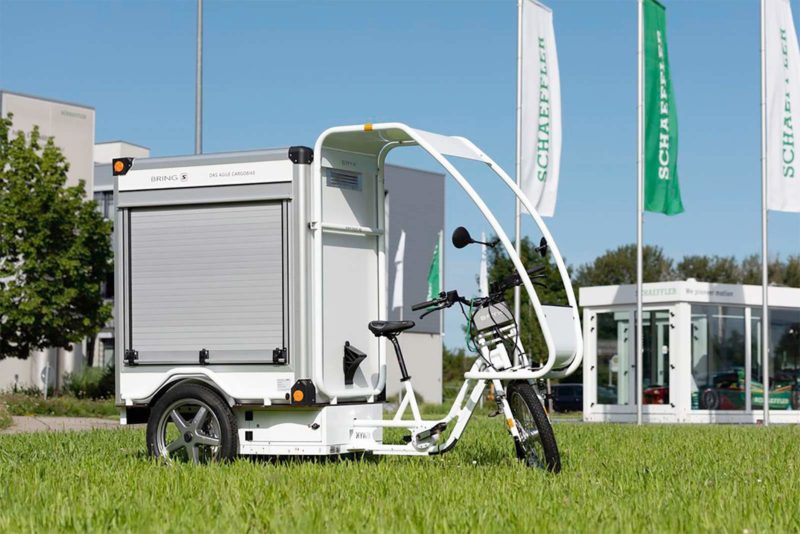 If you’ve heard the term “drive by wire”, get ready for e-cargo bikes that “bike by wire”. This new crankset generator from Schaeffler Group uses their automotive technologies that allow fully electronic steering, braking, and acceleration in cars to give e-bikes a completely disconnected drivetrain.

Simply put, there’s no need for a chain, belt or driveshaft to connect the crankset to the rear hub. Rather, it uses gauges in the bottom bracket shell to measure your pedaling force, then sends a signal to a hub motor to propel you forward at the appropriate rate. It’s fascinating, and it could change the nature of e-bikes.

We’ve already seen one application at the IAA Mobility Show that shows how this could work, but first, let’s talk about how their technology is also going to change the way we drive cars and why that matters for cyclists…

Drive by wire is the future of vehicles 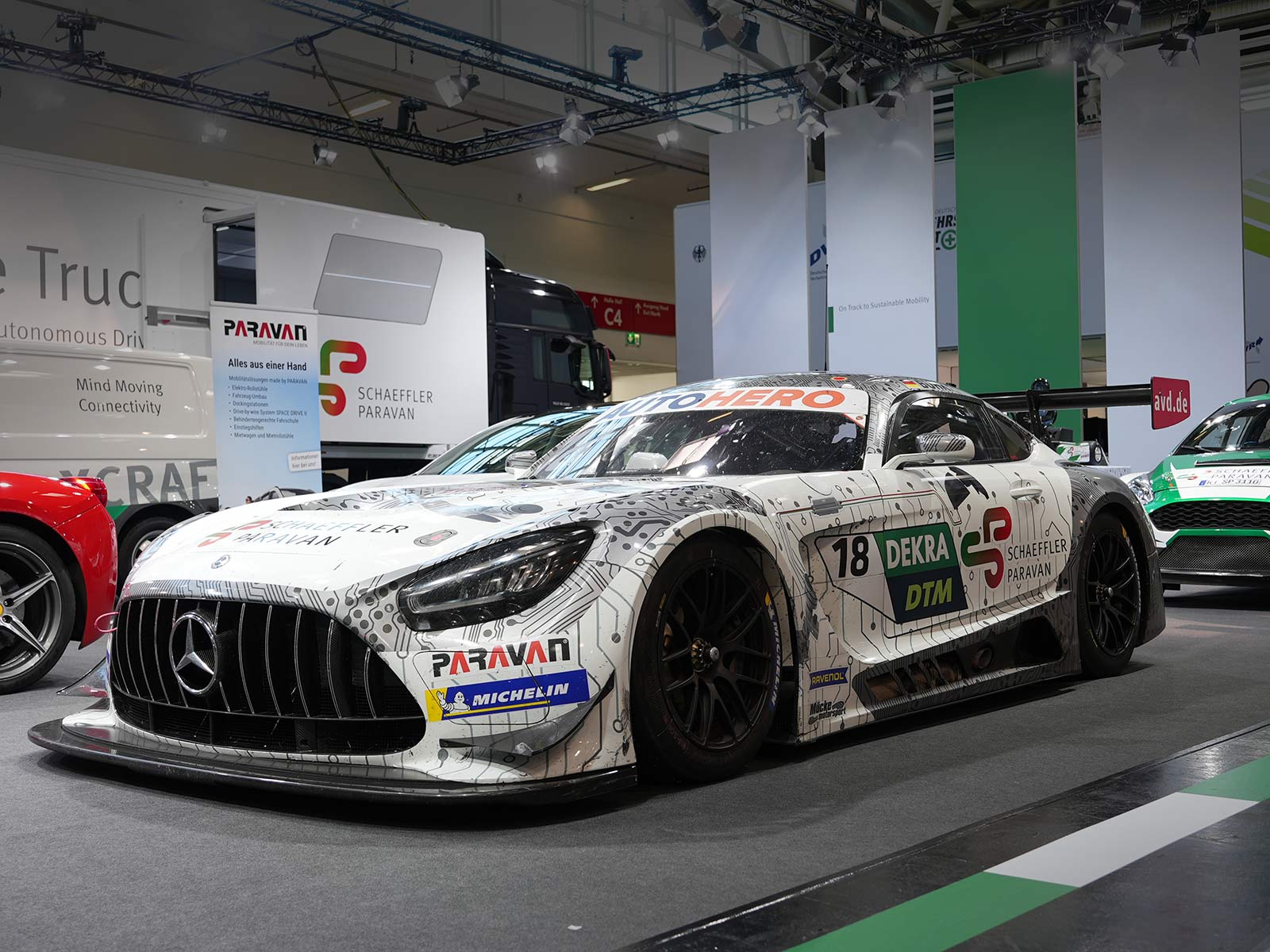 As with most car things, new technologies are proven on the race track. Stick with me. This race car has been testing Schaeffler Group’s Space Drive system in several major events, using electronic steering controls in place of the traditional steering column: 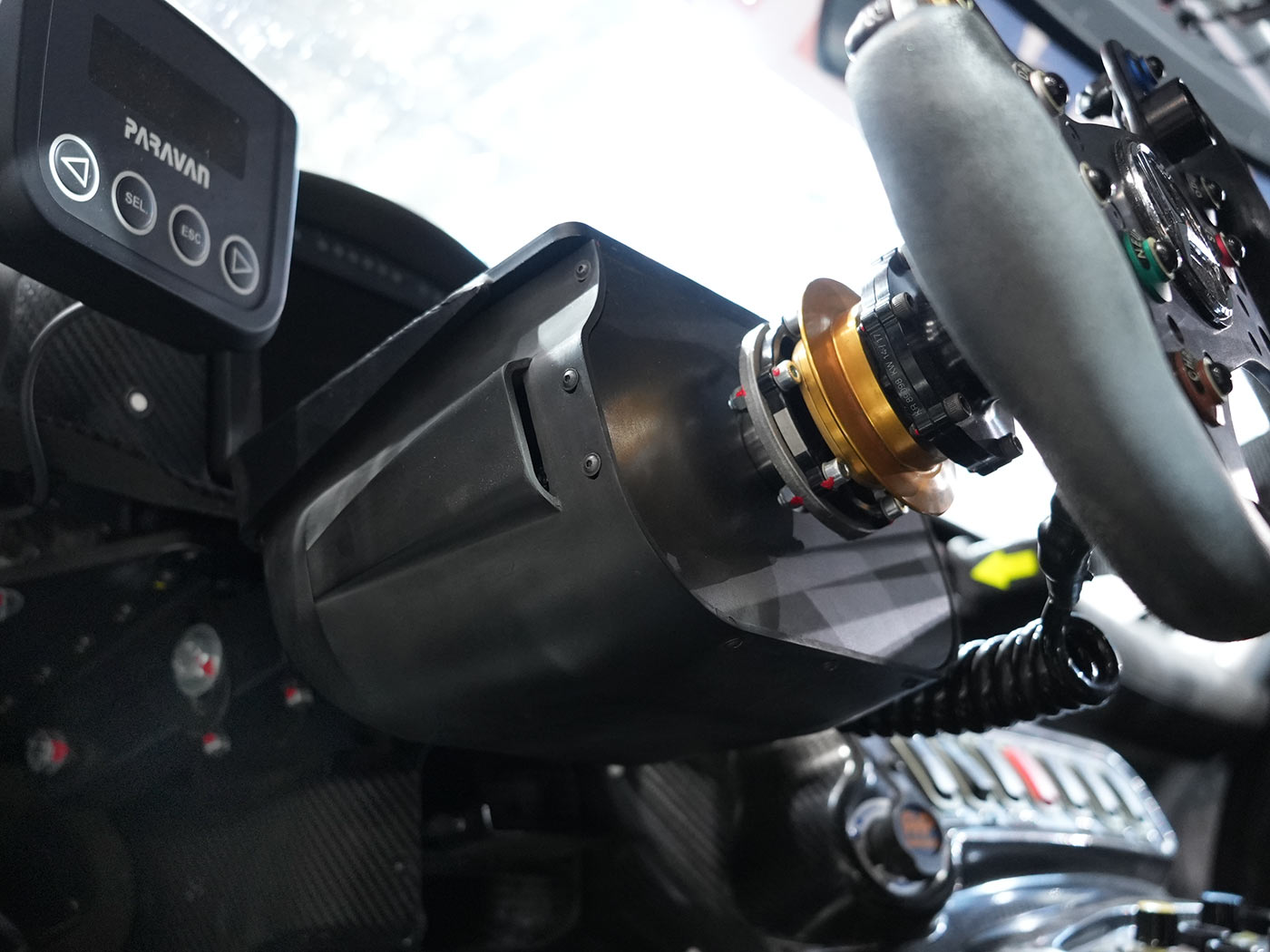 It’s a bit dark under the dash, but there’s no steering shaft connecting that wheel to the rack assembly. Instead, there’s a motor turning what’s left of the steering shaft, and that motor is controlled by the steering wheel. 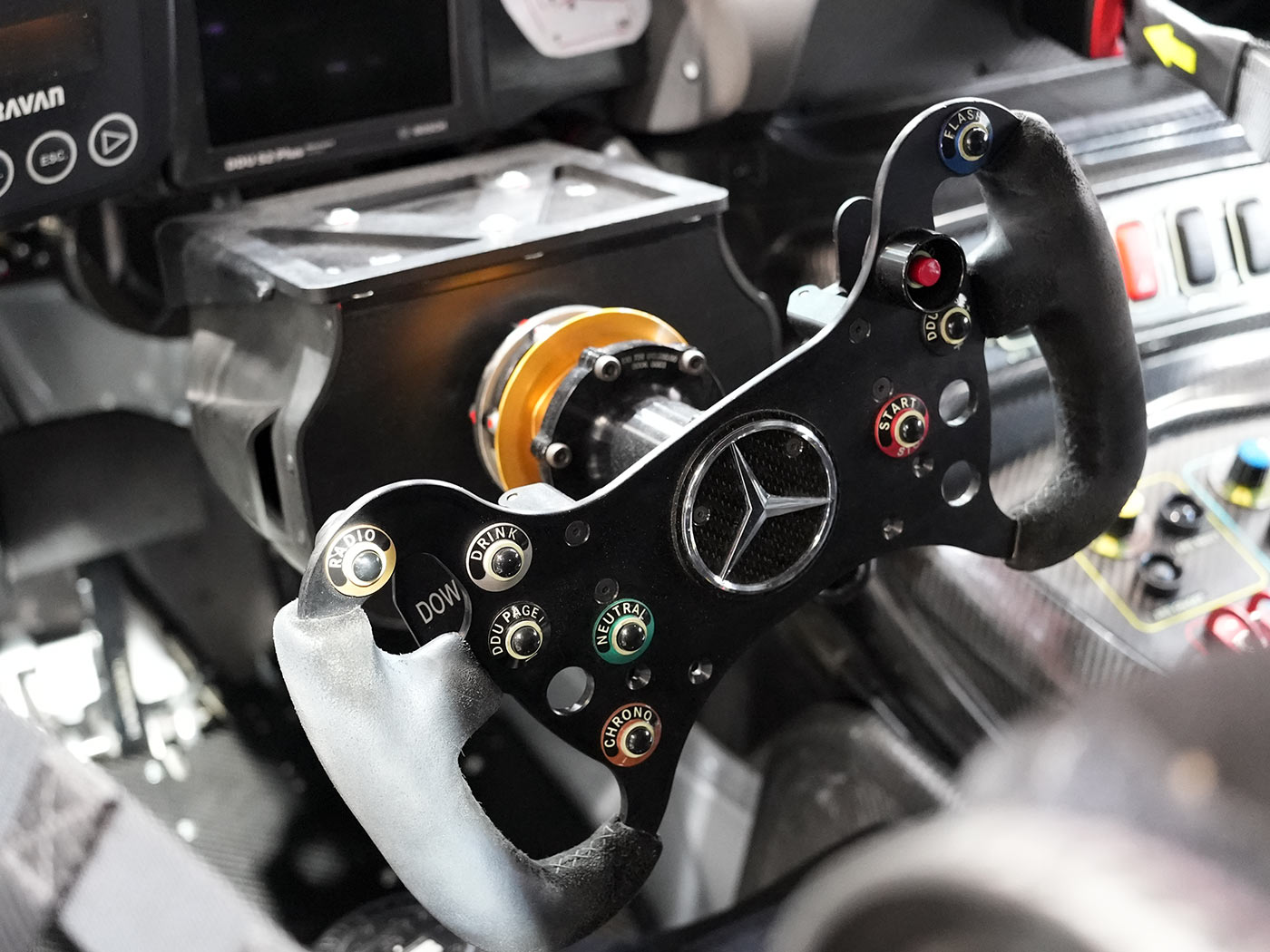 The tricky part is transmitting the tactile feedback from the tires back to the steering wheel, giving the driver the physical feedback they need to safely control the car. More on how that works below, but first let’s talk about why more and more cars are going to move to drive by wire systems: Autonomous driving. 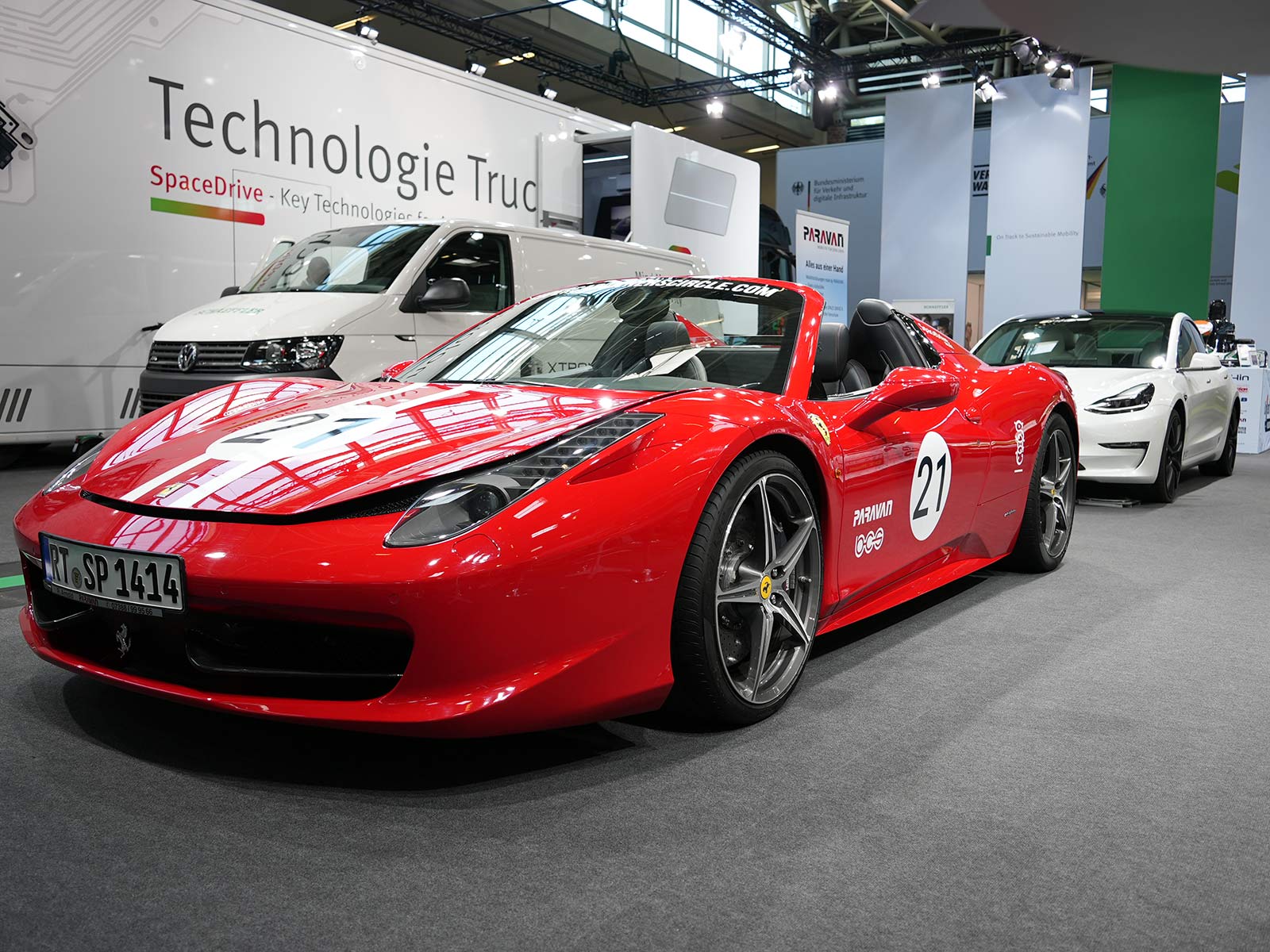 As more cars gain semi- or full-autonomous driving, there need to be better controls and systems to help everything work together. Trying to add motorized, electronic control of existing rack-and-pinion steering systems, as well as our pedal-based accelerator and brake pedals, is inefficient…it’s making a motor do a lot more than it has to to accomplish the task.

This wastes energy and slows things down. And as a cyclist that might have to veer into the lane to avoid a stupid squirrel, or getting doored, we want self-driving cars to be able to react as quickly as non-humanly possible.

Here’s how this applies to normal cars, you know, like the Ferrari and Tesla shown here: 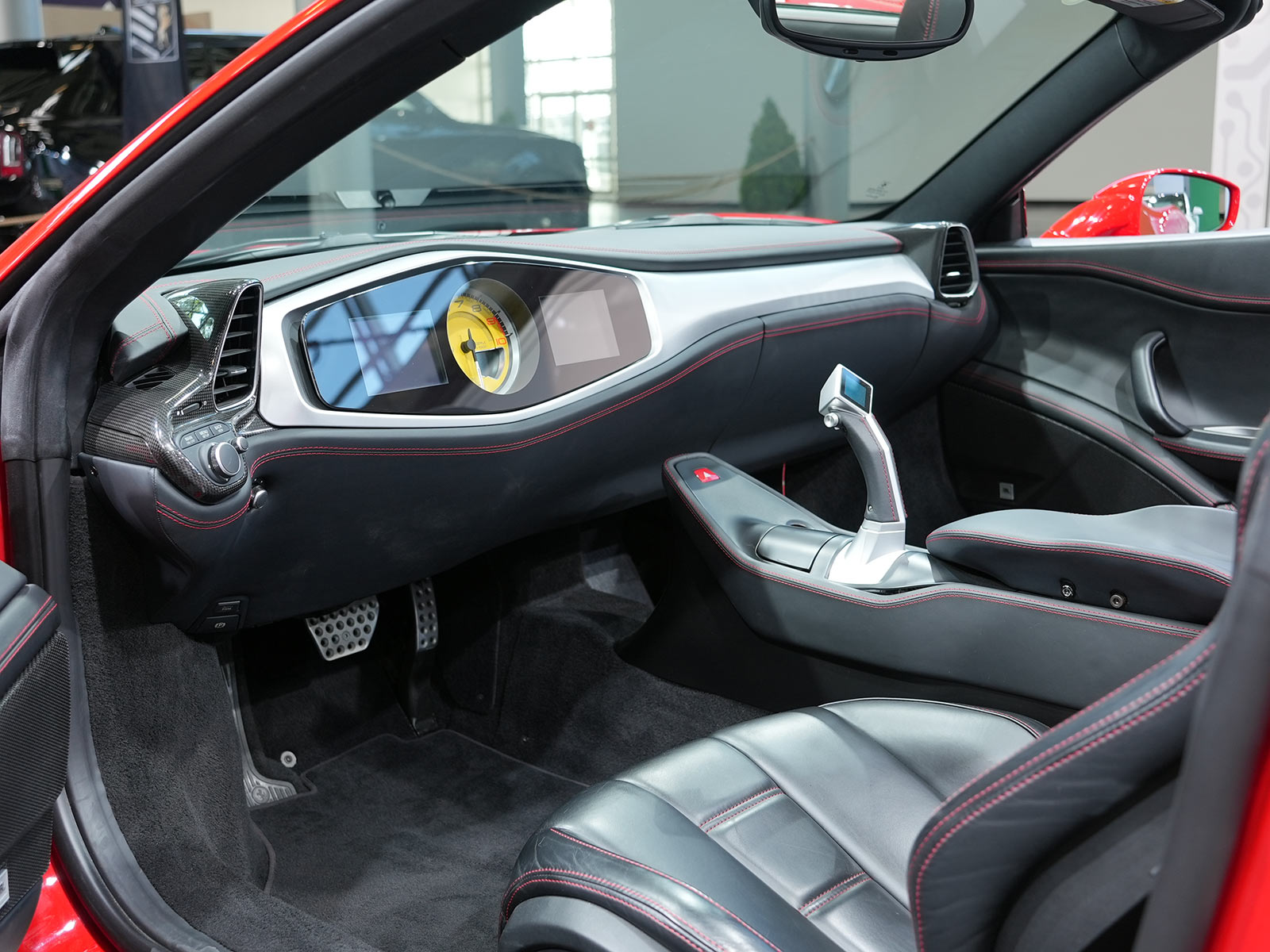 It could be as simple as replacing the steering column and steering wheel with a joystick, but keeping the gas and brake pedals. Maybe sports cars would still want this…though, having tried a simulator, I think I’d prefer a steering wheel for track use. 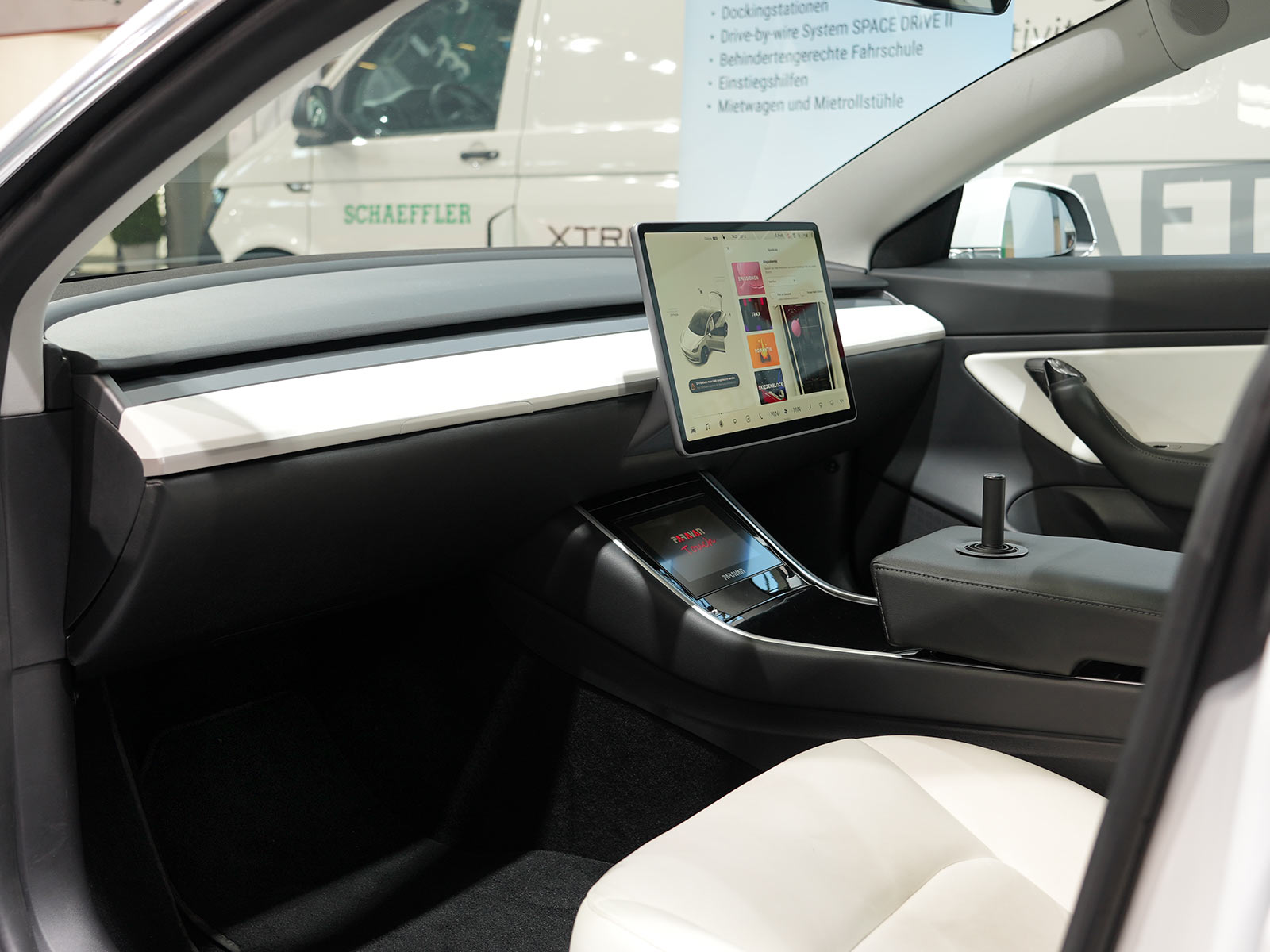 Take it a step further and you could get rid of the pedals, too. This retrofitted Tesla has only a joystick for manual control of the car, from braking to driving to steering. What’s wild is that SpaceDrive has been making systems like this for physically challenged or limited people for 18 years! It’s only recently they’ve been adding the capability for these systems to be completely computer controlled, relying on the input from radar, lidar, camera, and other on-board sensors. 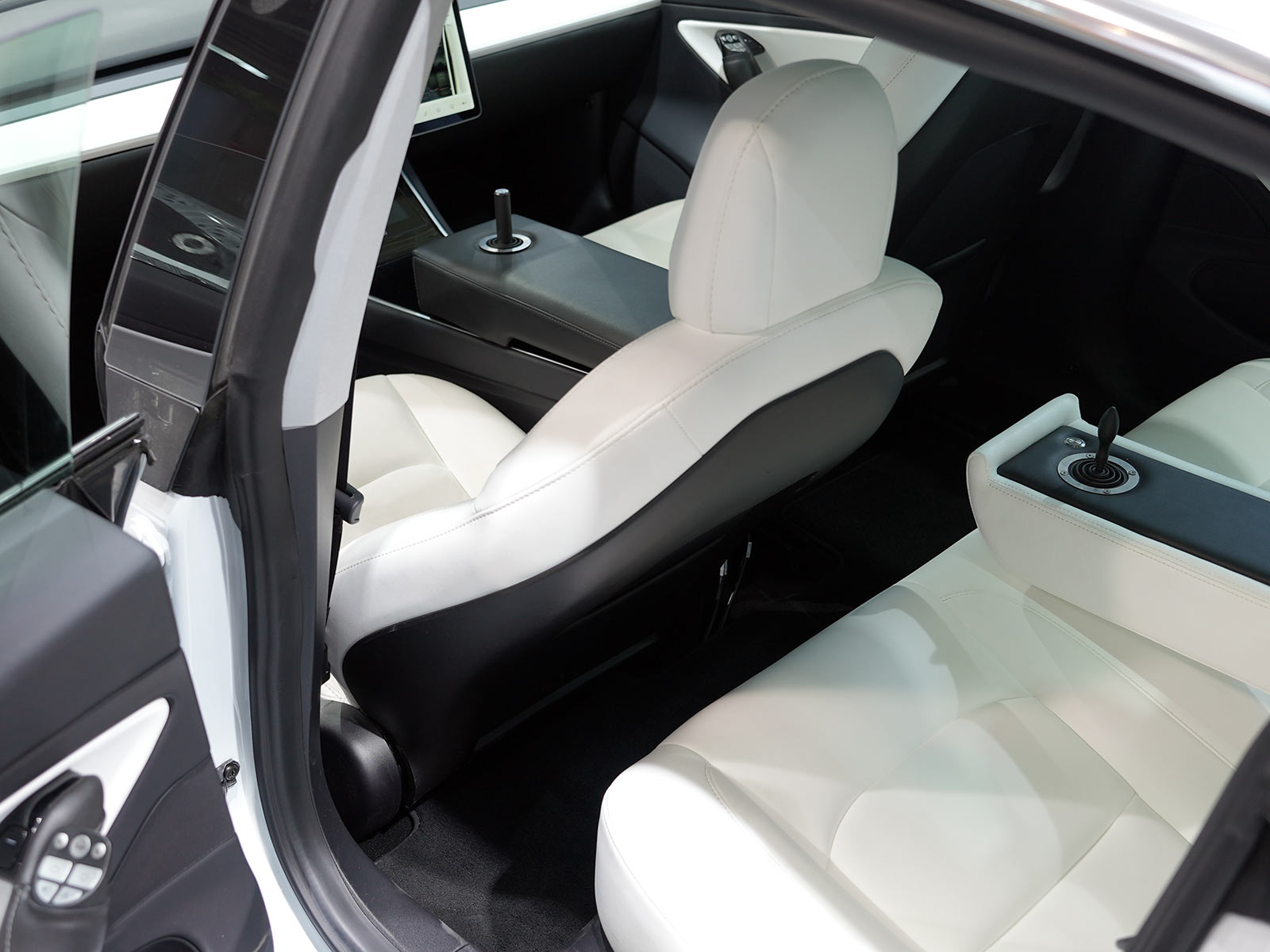 But there still needs to be a backup failsafe, which could me manual control. And maybe that person taking over is in the backseat…because you could literally put a joystick anywhere. Or make it wireless. Or have it be an app on your phone. They’ve done all that, too. You could even have a steering wheel that can be pulled off the dash and moved to the other side of the car, making it way easier for manufacturers who produce vehicles for both left- and right-hand drive countries. 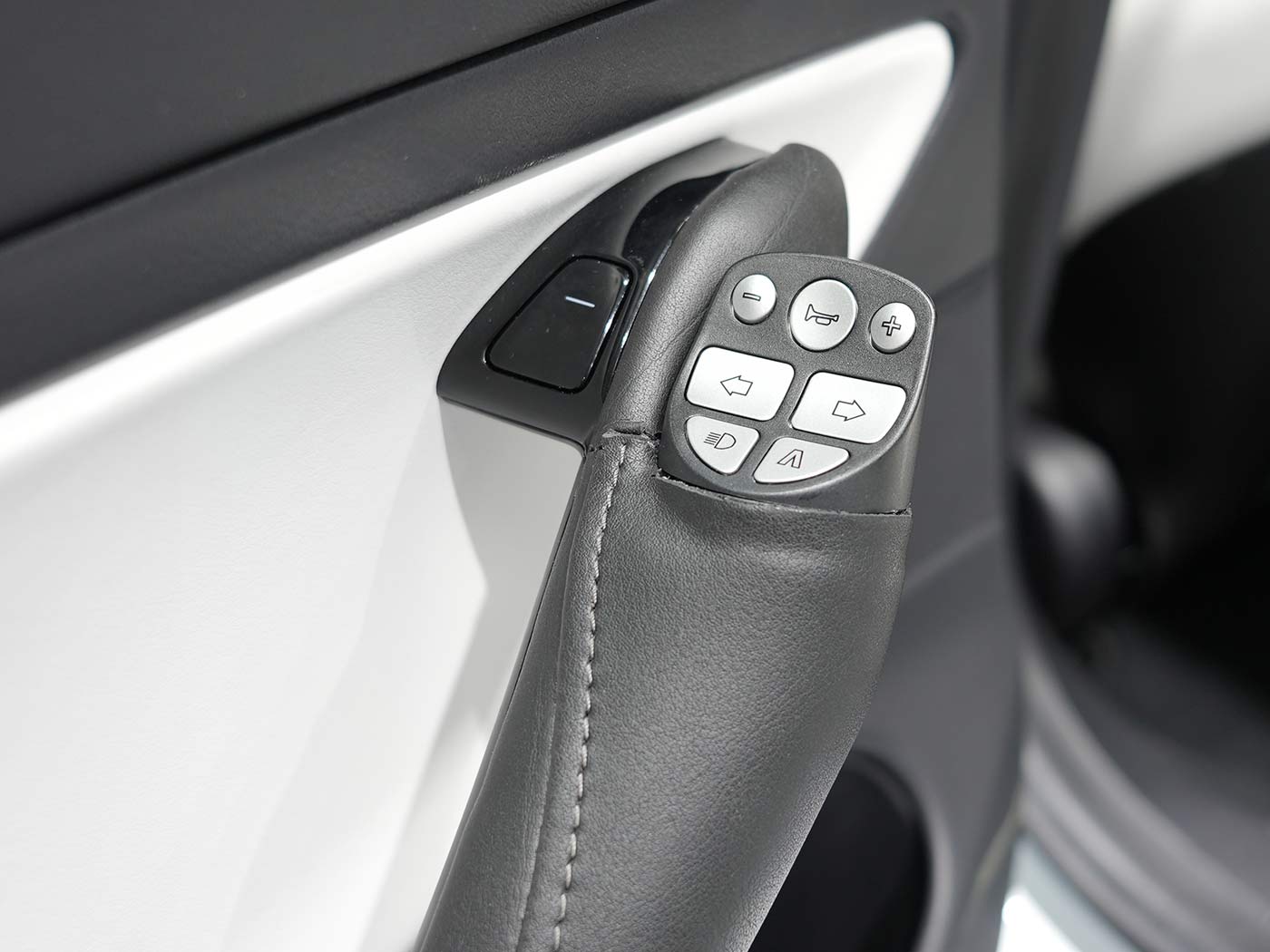 Then you just stick the controls for turn signals, lights, horn, etc., on the door handle. Because why not? 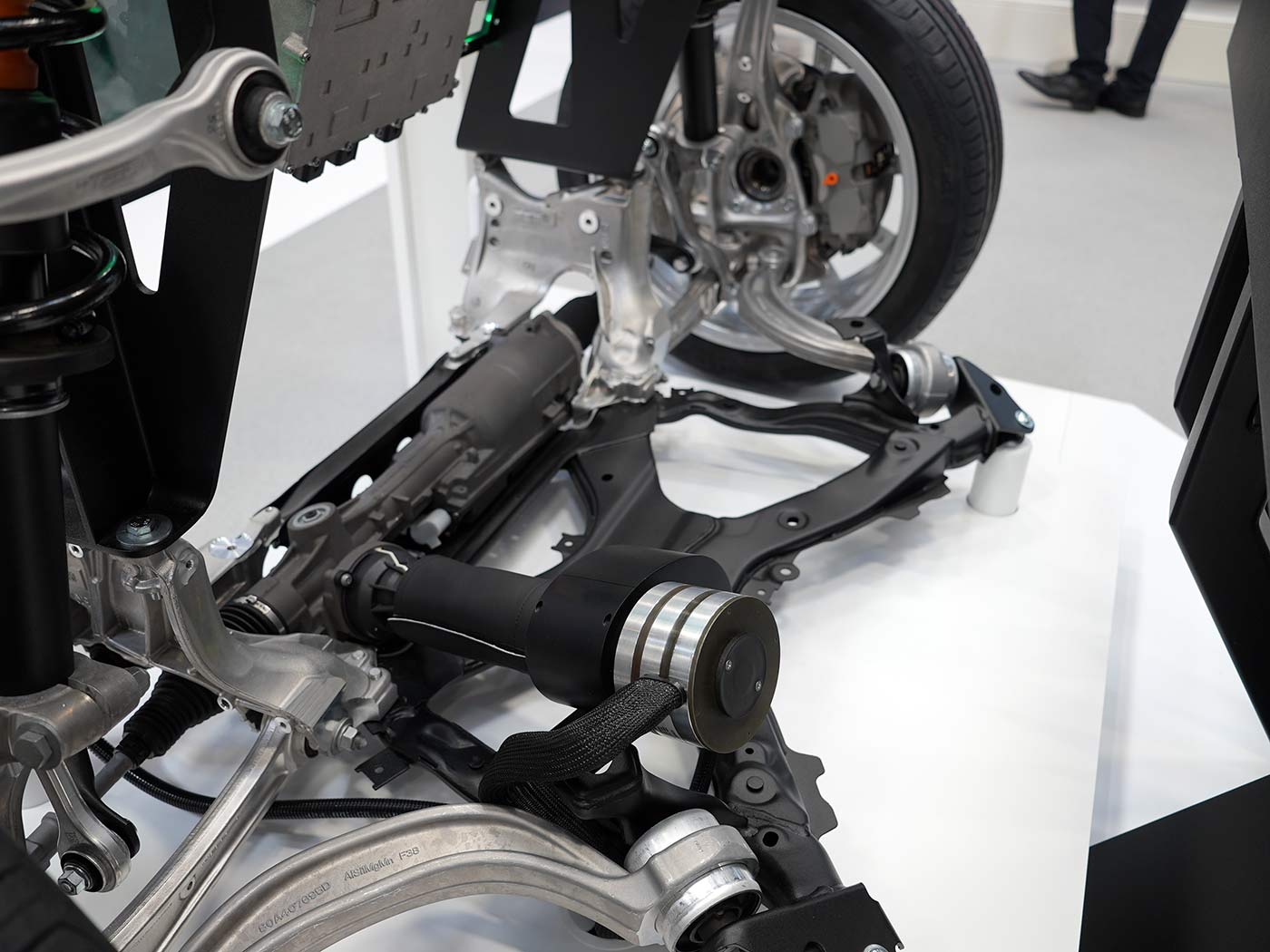 Not only does this open up autonomous driving and alternative interior layouts, it also opens up exterior design and motor placement because you no long have to work around a physical steering assembly.

The photo above shows the actuator connecting directly into the steering control. The position and amount of electrical current running through the actuator is relayed to the steering control, which then provides an appropriate amount of resistance to turning the wheel. That’s how it’s able to translate road feel from tire to wire, and it’s all tunable. Meaning, they can offer different steering responses based on how you’re driving, how fast you’re going, or any other variable they want. 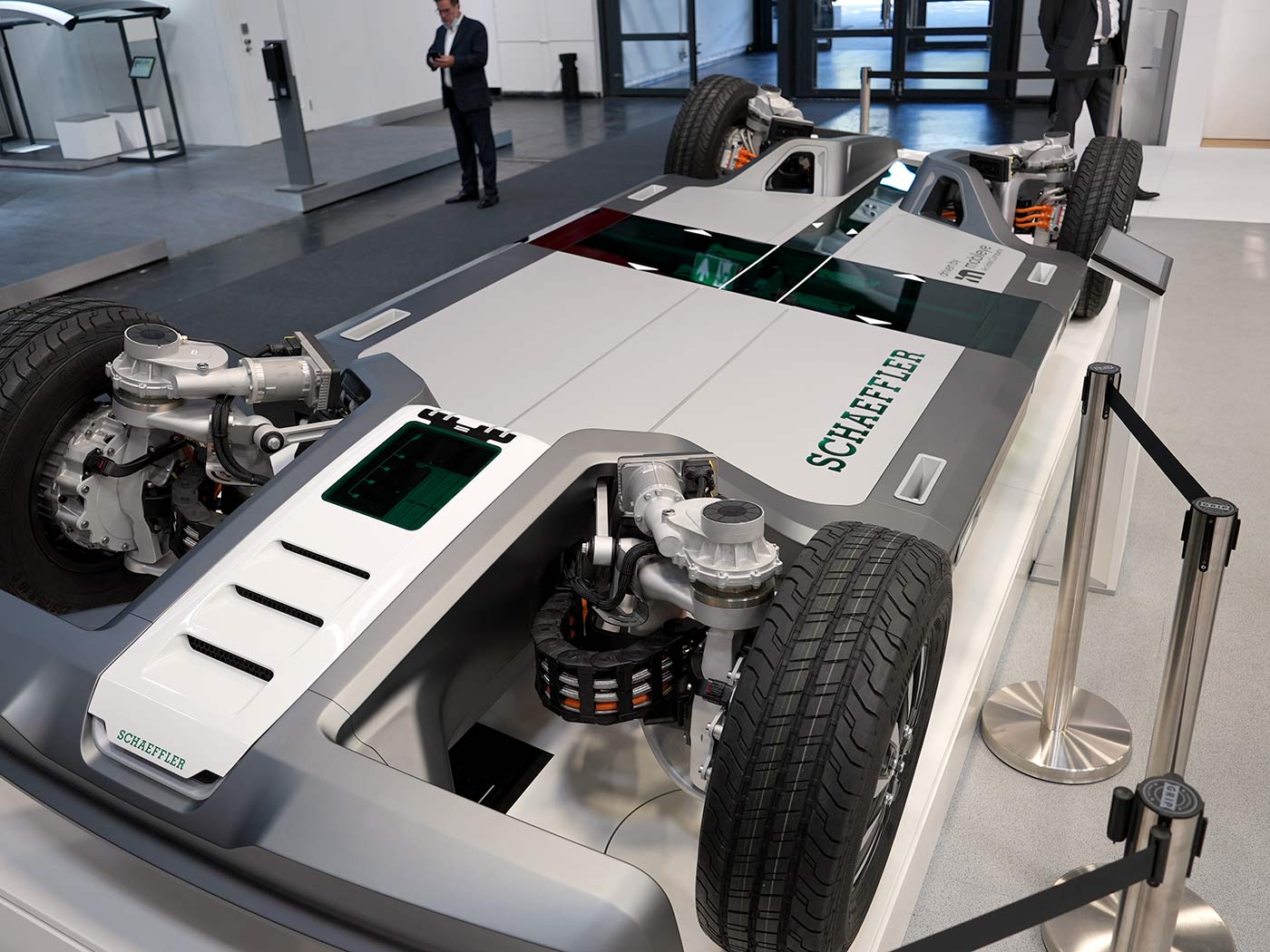 It means cars can be built entirely differently, essentially on top of battery-packed sleds… 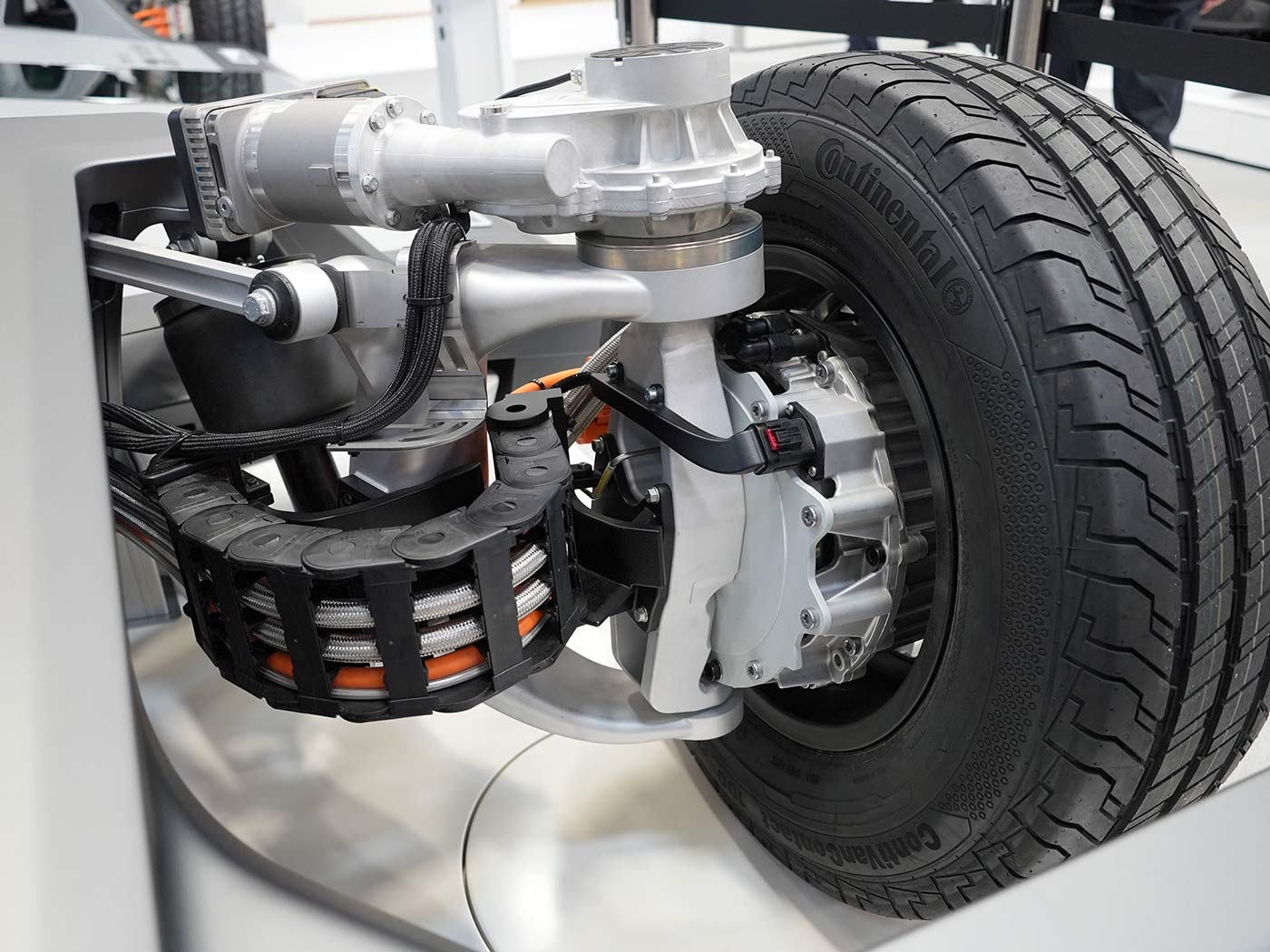 …with a motor at every wheel. In a full drive-by-wire system, vehicle design is no longer limited by mechanical constraints. And their safety is as good as the software, which can routinely be updated as they improve it. And it can easily be translated to bicycles…

What does “Bike By Wire” mean?

Schaeffler’s “Bike by Wire” crankset system eliminates the need for a chain, belt, driveshaft, or anything else connecting the cranks to the rear wheel. Or front wheel. Or any wheel, depending on whether you’re talking about a tricycle or quad-cycle, or maybe even a cargo trailer.

OK, but if they’re not connected, doesn’t that remove the need to actually pedal to move the bike forward? Why not just put a throttle on it and remove the crankarms altogether? Good questions… 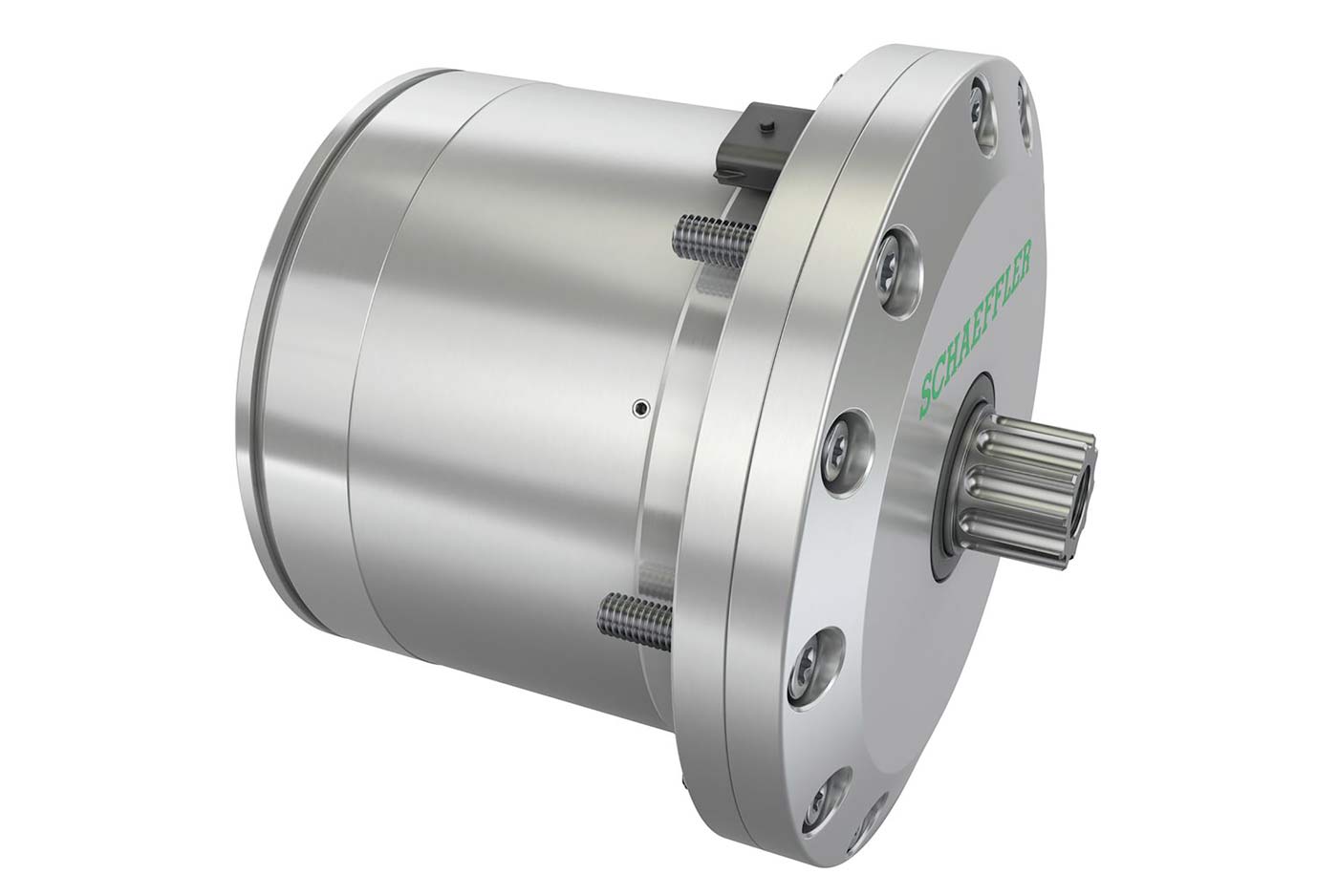 The answer is, you become the power source. It works by putting a small generator in the crank’s “bottom bracket”, letting you make energy as you pedal. Sensors detect how hard you’re pedaling and can dial up the resistance to create more energy while simultaneously making the hub motor go faster. Or, if you want a harder workout, you could manually increase the resistance, and bank the extra power in batteries to be used later.

How would this be used? 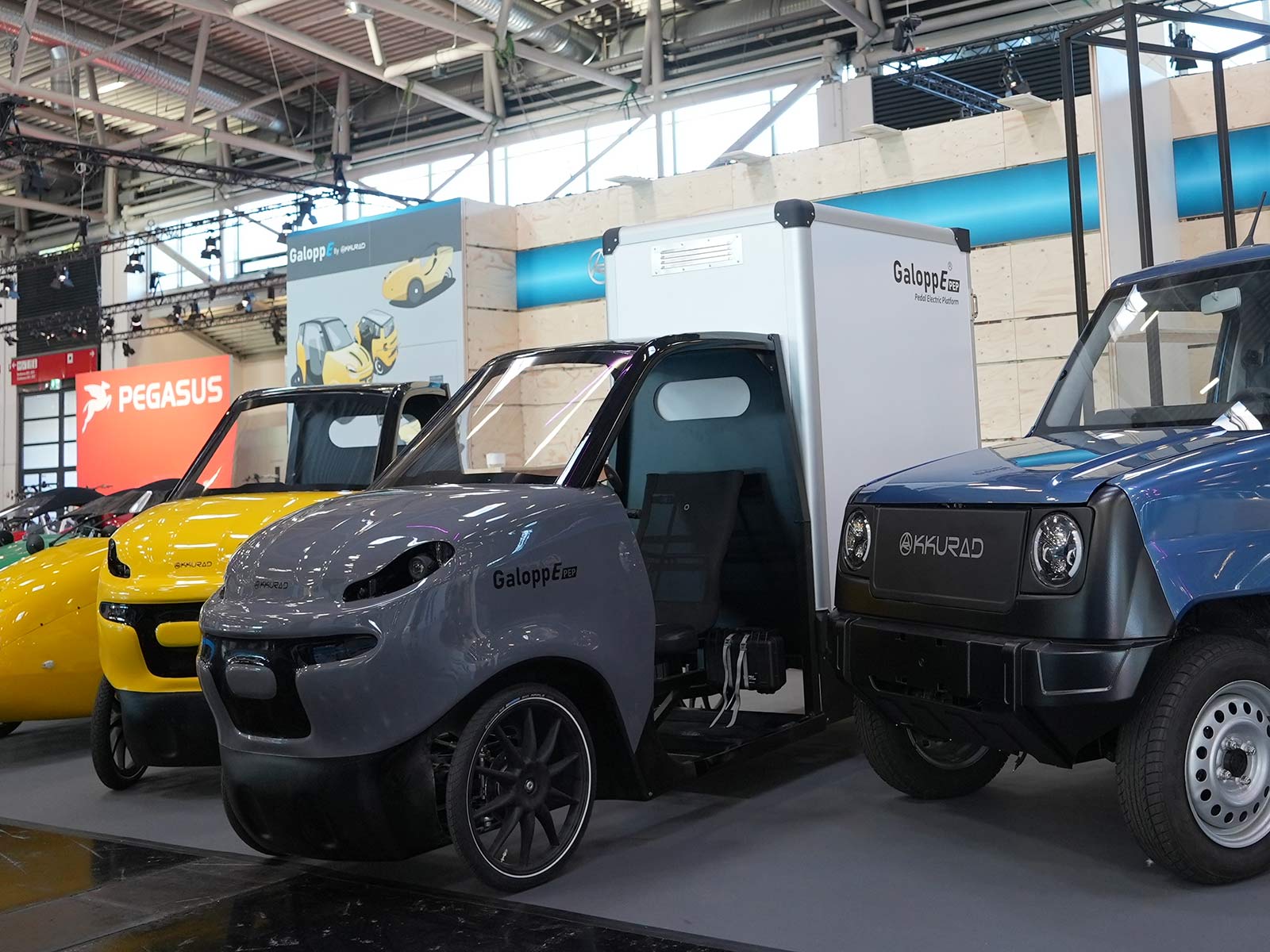 You could build a bike that simply uses the parts already described, but there are also hybrid uses, like this quasi-pedal-powered GaloppE cargo truck concept from Akkurad. It combines traditional pedal-driven front wheels with motor-powered rear wheels: 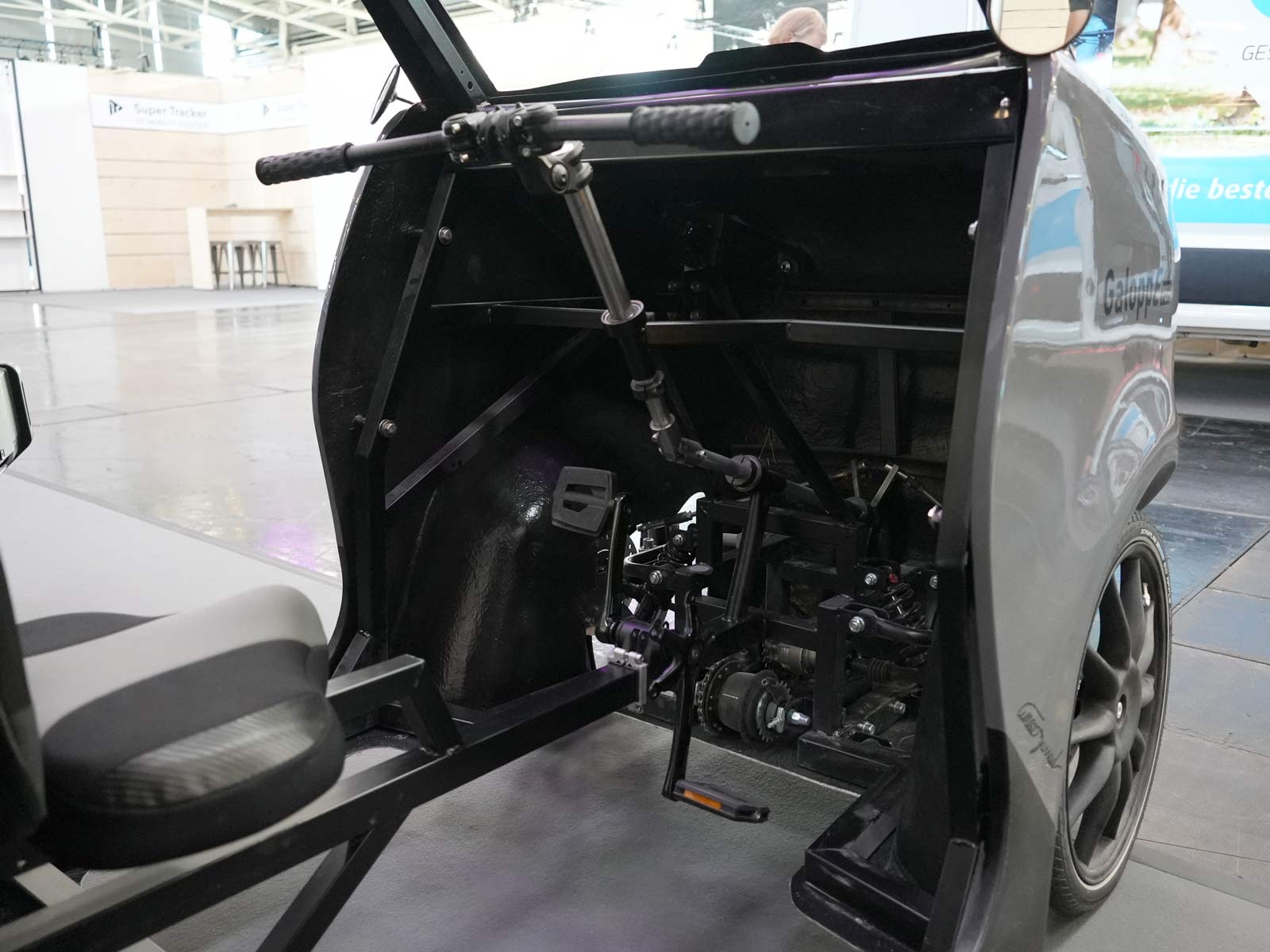 This isn’t using Schaeffler’s system (that we know of), but the idea is the same: It measures pedal inputs to adjust the motor’s output. This keeps it acting like an e-bike for both ecological and legal reasons. And, you know, gives the user some exercise, too!

We could also see products and tech like this being used for autonomous trailers like the Ducktrain, where it uses one set of sensors to follow you, and another to help control their motor’s output. Other benefits include a much cleaner, more durable system since there’s no drivetrain parts to get greasy or wear out. And, since the rider is generating power, bikes could get away with smaller, lighter battery packs or much longer ranges, depending on what’s needed.