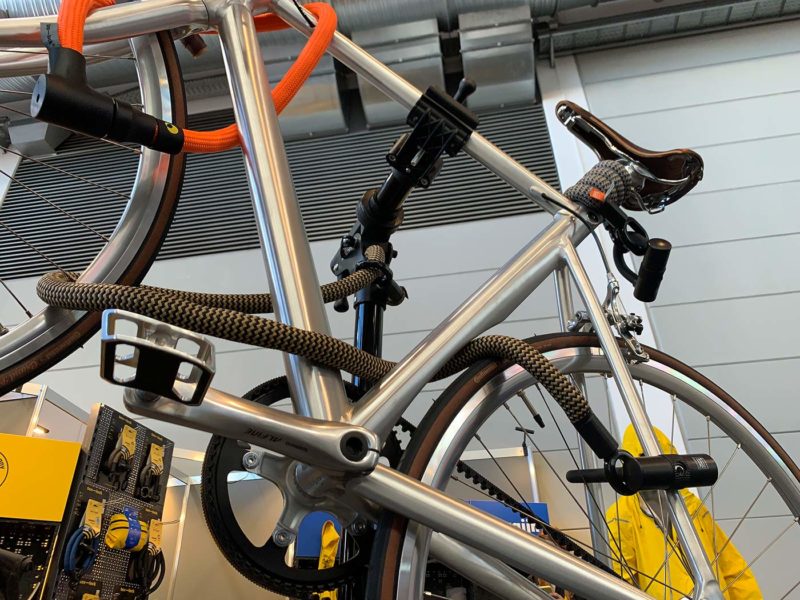 New locks from German brands Abus and Tex-Lock give you more reach and clever new features for securing your bike. Startup Uplock hides a folding lock inside your seatpost, and slimmer lights from Supernova add braking and aerodynamics to the mix. Let’s start with locks…

What caught our eye in Tex-Lock’s booth were the extremely long cable locks with U-Lock shackle combos. While they come in multiple lengths, it’s the long ones with mini U-Locks that seemed like the winning package.

Each end of the Eyelet cables has a loop, one bigger than the other so you can feed the small end through. Loop that around the pole or bike rack, then snake the rest through your frame and use the U-lock to secure it all to your bike. There’s enough length to easily loop through both wheels and the frame, and you may even be able to get the shackle through some saddle rails or cutouts, giving you total security.

The shorter ones can just be wrapped around your seat tube while riding. Their Mate model has a loop at one end and a prong that locks into frame-mounted rear wheel locks common on European commuter and e-bikes. 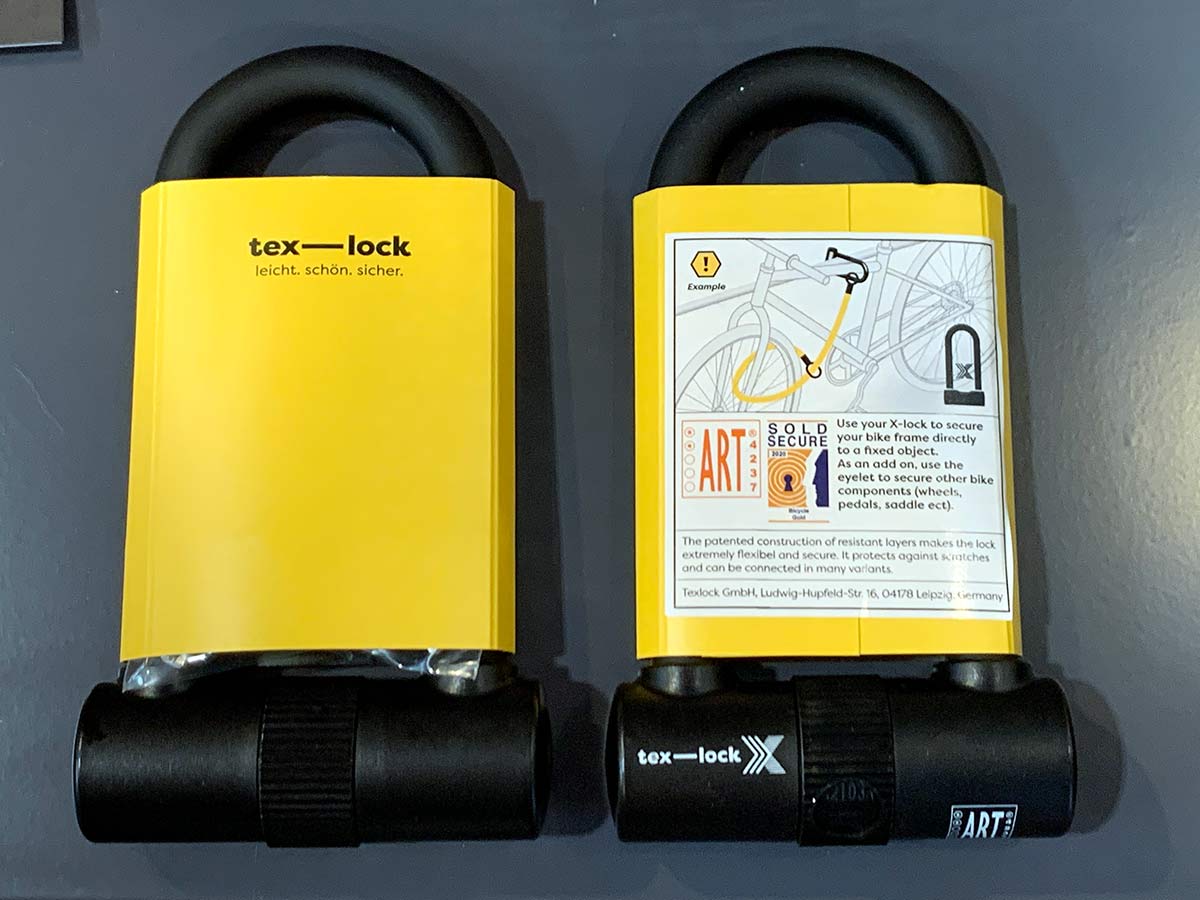 The cables have four layers, each designed to prevent sawing, cutting and fire attacks. The outer layer is a soft material to protect your bike’s paint. Cable length options are 80cm, 120cm and 160cm. They’re sold in bundles with either a shorter U-Lock (Sold Secure Silver rated) or longer X-Lock (Sold Secure Gold rated). 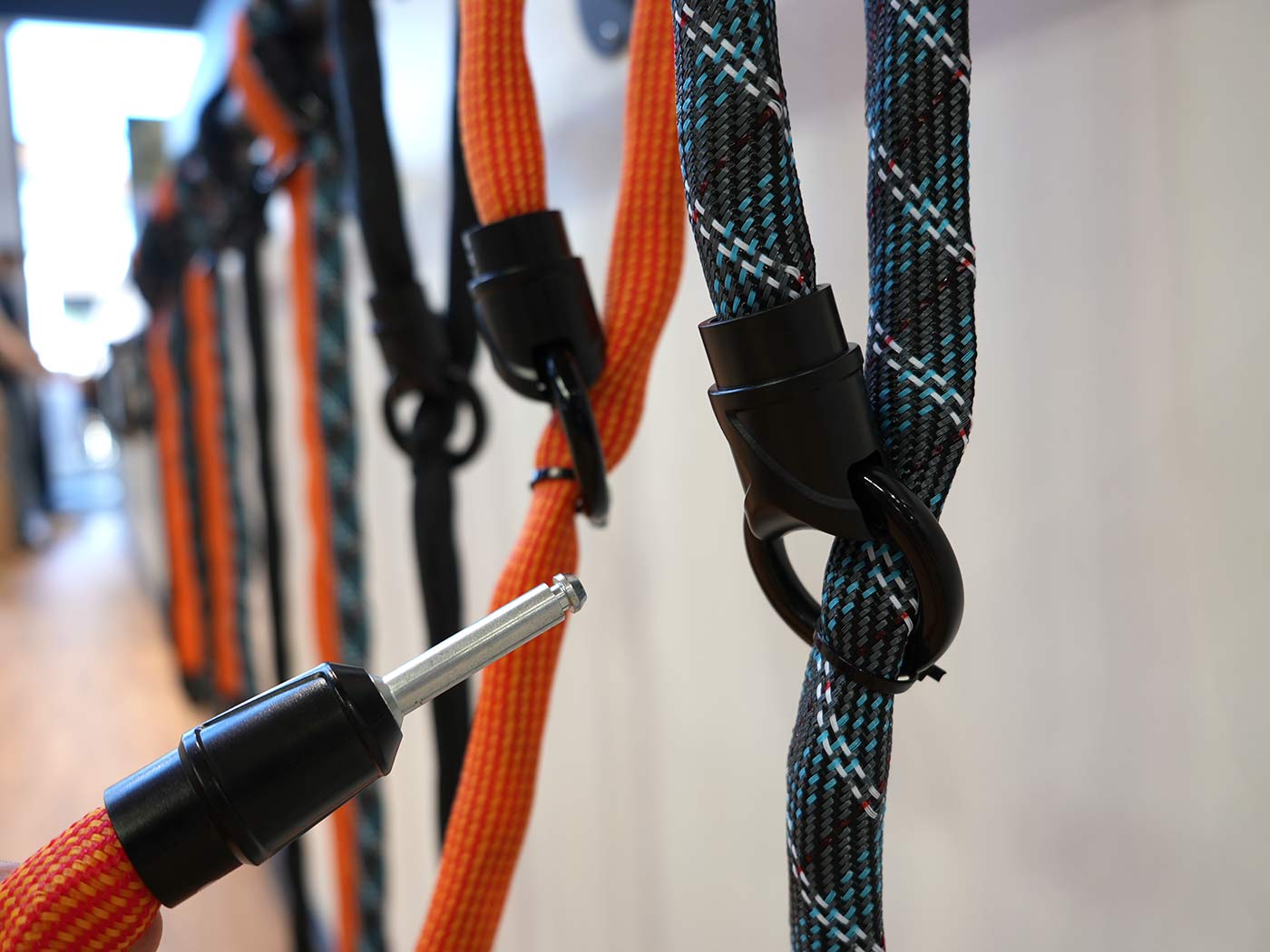 The Abus Ivera steel shell-over-cable locks get some fresh colors, and a frame lock option for connecting it to rear wheel frame locks. The Ivera is one of our favorite bike locks, rated very highly in our Bike Lock Buyer’s Guide. 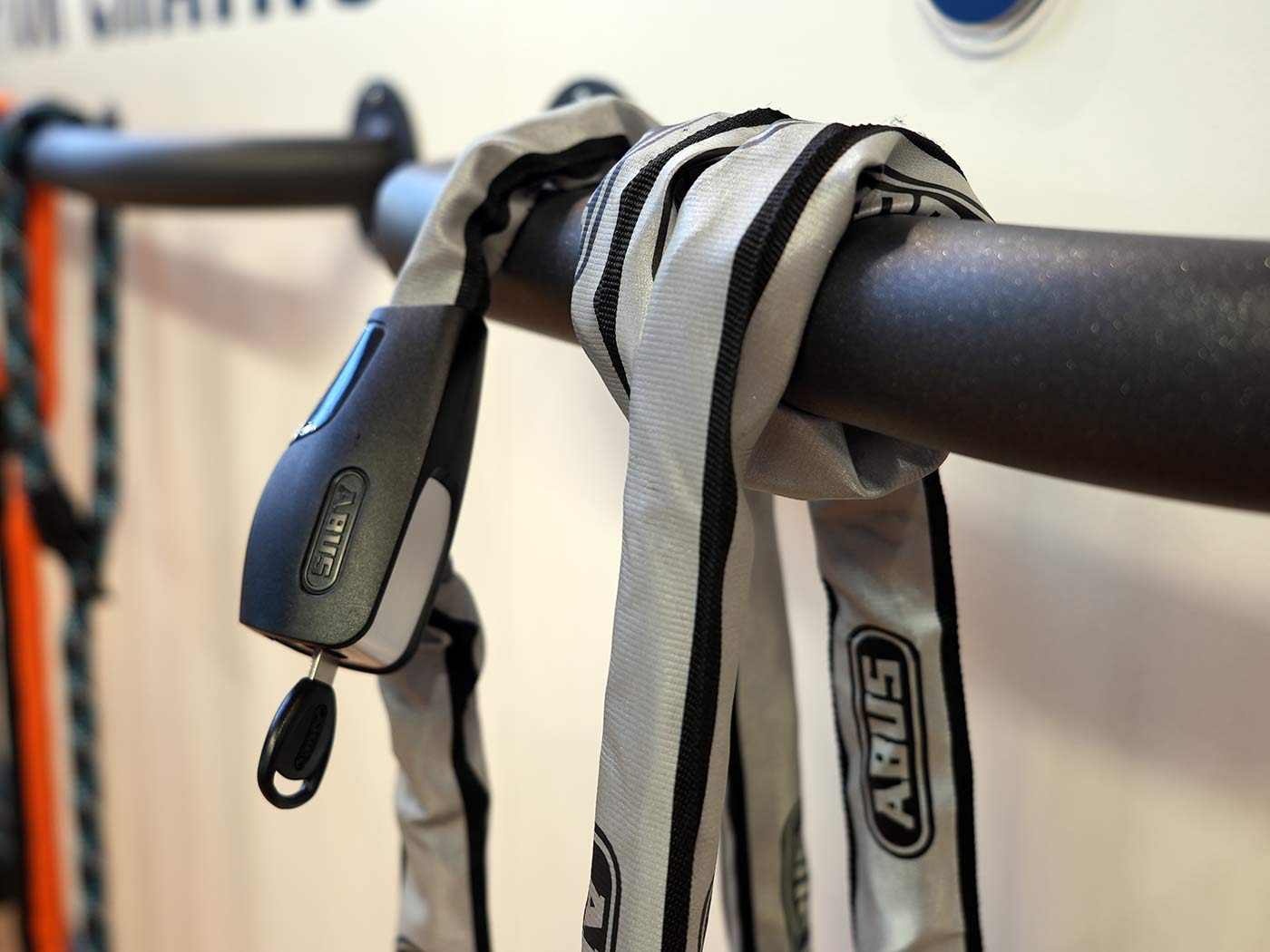 The Abus Catena chain lock will soon come with a reflective sleeve option. We love to sling these over our shoulder for quick commutes, so it’s a good way to add a lot of visibility to yourself at night.

Their Bordo folding lock lineup gets a visual refresh with a more modern aesthetic and slimmer frame mount. The highlight (pun intended) is the new Bordo 6000C LED model, which adds a small light for the combination lock so you can see the numbers at night! 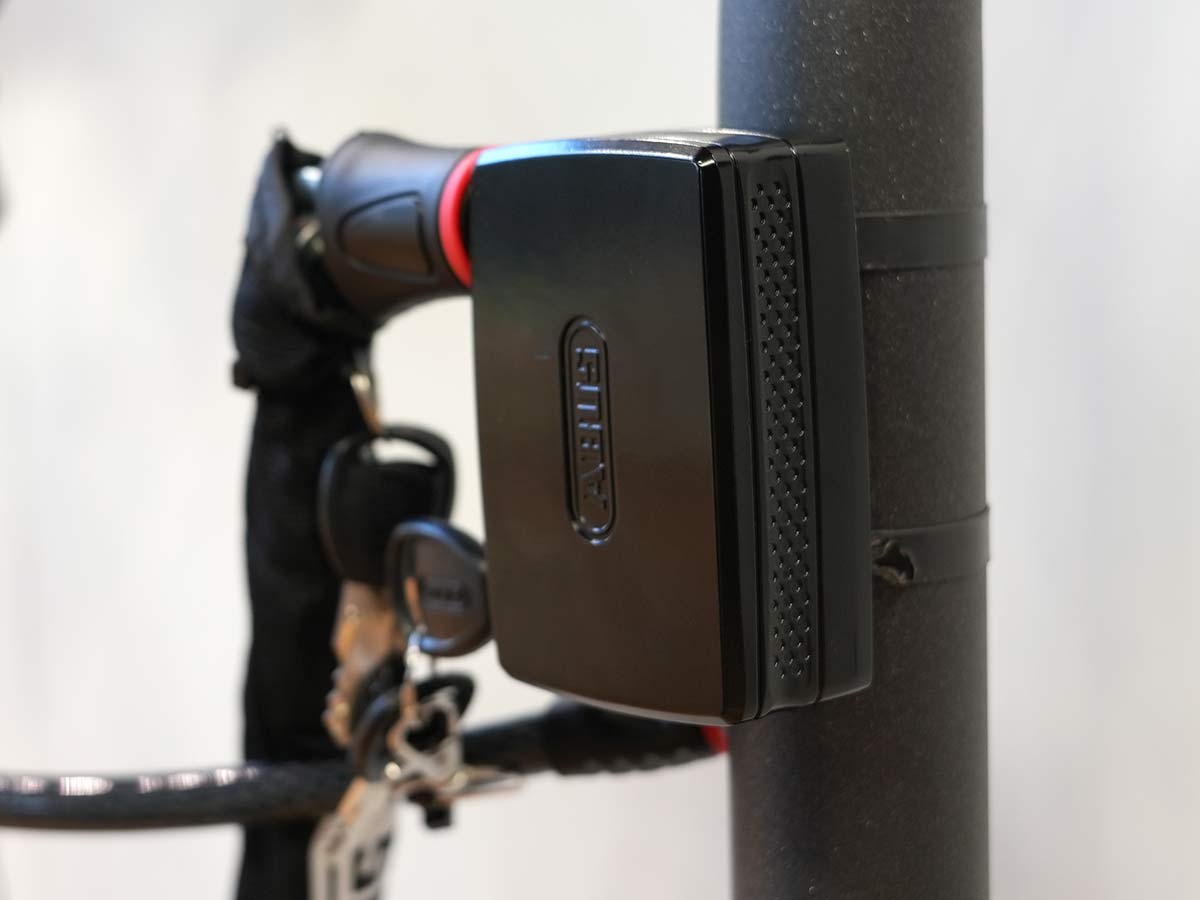 The Alarm Box is a new standalone bicycle alarm that will come in two versions, a larger key-operated model, and a smaller remote controlled option. Shown here is the larger version, which straps to your bike more securely with hidden bolts under the alarm. Once it’s installed and locked, there’s no way to remove it without the key. Just push a button and it’s armed.

The Alarm Box RC (for Remote Control) straps to your bike with a Velcro strap and turns on and off with a remote. You can even pair the remote to multiple Alarm Boxes.

Both varieties will sound a few chirps if someone knocks into your bike or just moves it slightly. But a more aggressive movement will trigger a 100db alarm for 15 seconds. And they’re not just for bikes…you could strap them to anything, like strollers, grills, etc., to help keep them safe.

Uplock hides a lock in your seatpost 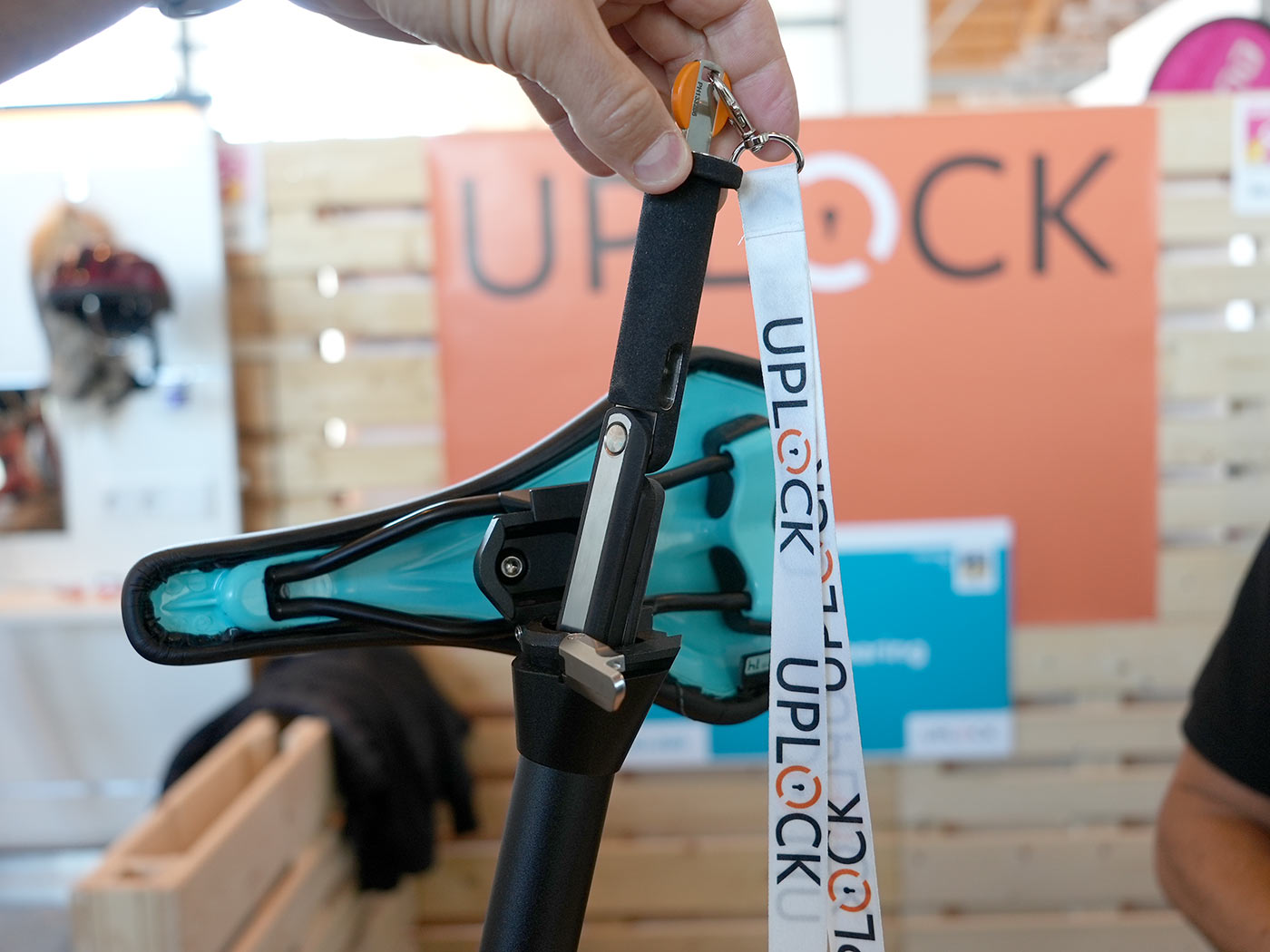 If you’ve ever forgotten your lock, then Uplock might be the solution you’re looking for. Hidden inside the seatpost, it’s always with you…you’ve just got to remember the key.

The custom post uses a sliding mount with locking latch to keep your saddle firmly in place while riding. It’s a multi-step design intentionally designed to eliminate rocking or creaking because they know that’s a deal breaker. They’ll offer posts in 27.2mm and 31.6mm options, with plans for black anodized alloy and a higher end titanium model. 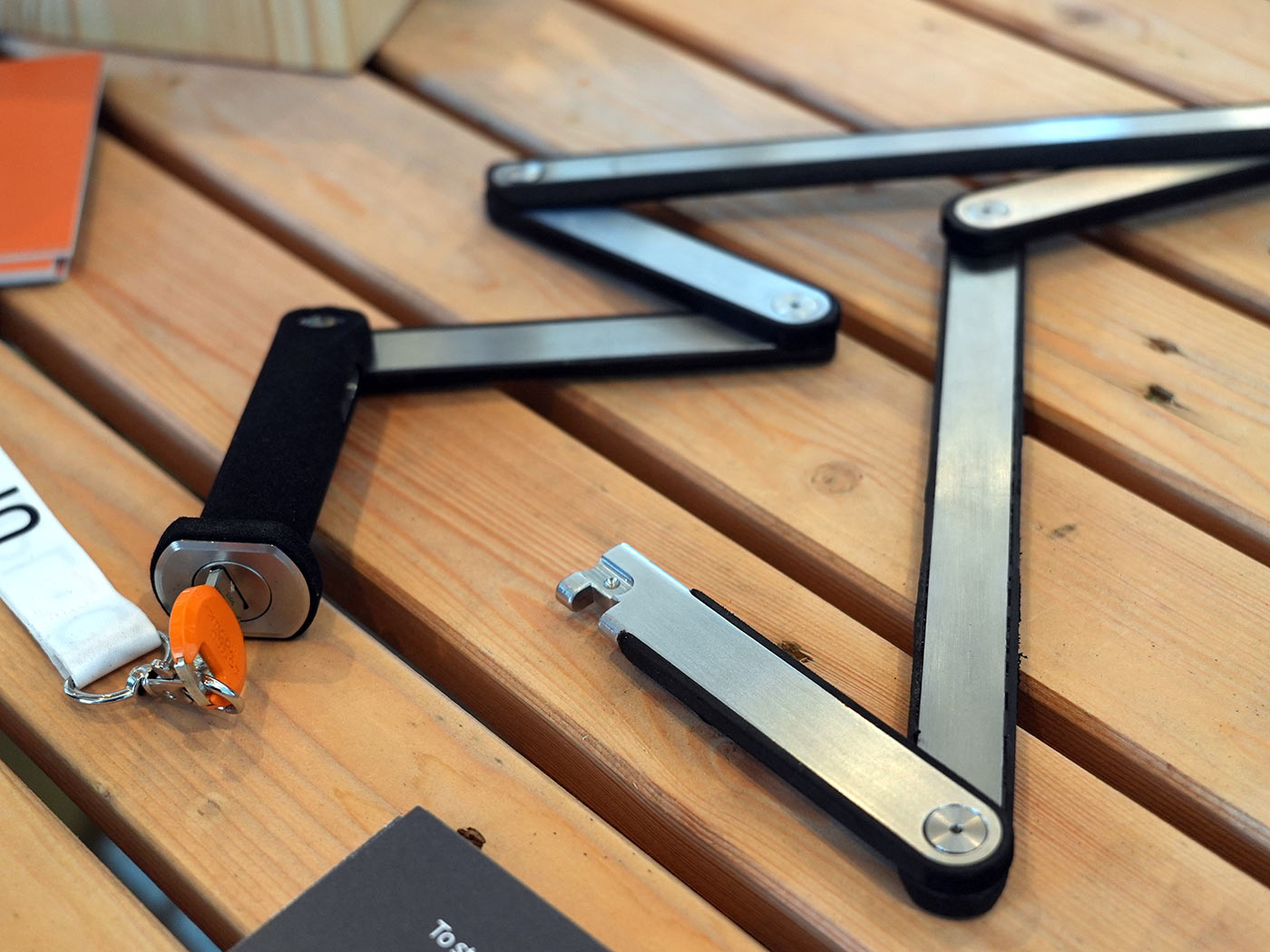 The lock itself is an impressive 109cm long. It’ll be made of hardened steel and designed to pass all the relevant tests…when it’s made. It’s still a prototype and being tested, then they’ll launch on IndieGoGo. You can sign up for updates on their website. 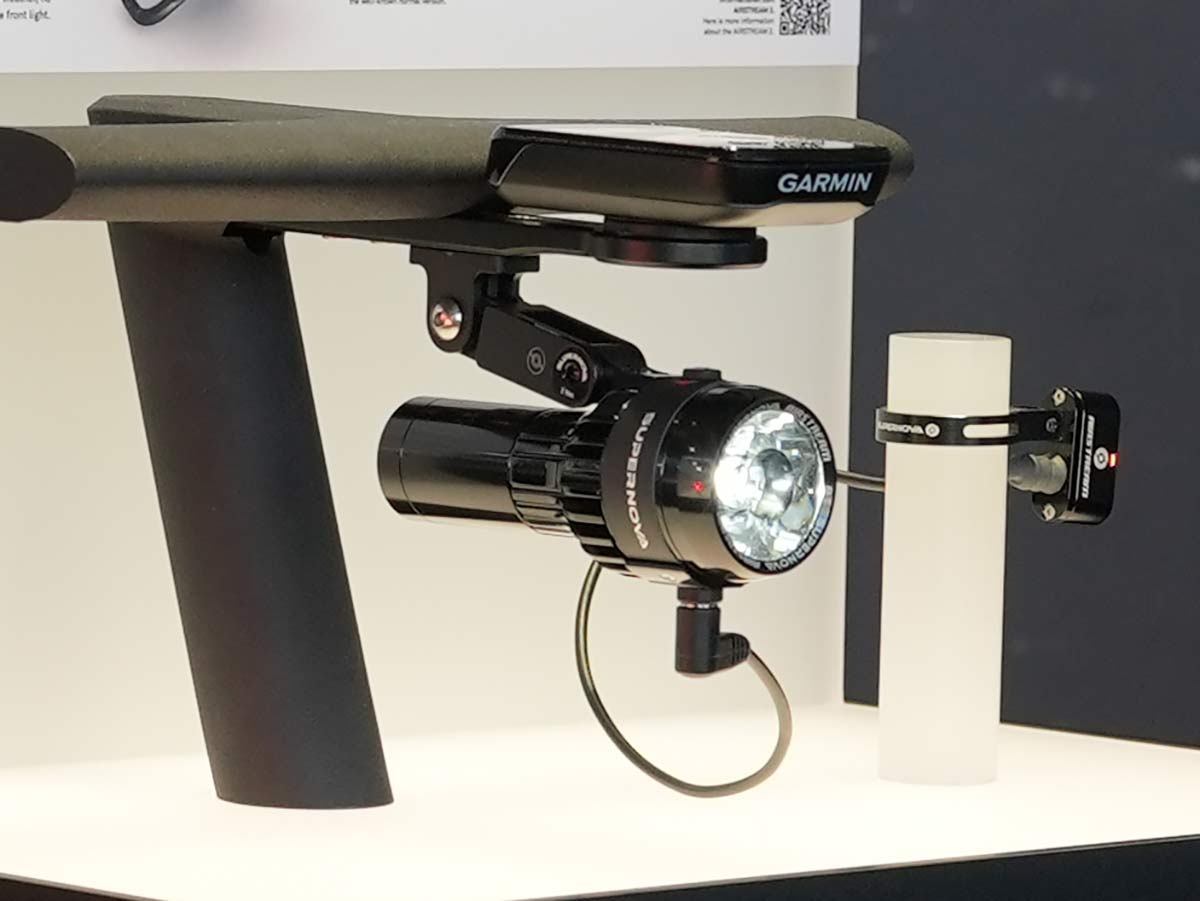 The Supernova Airstream 2 headlight is an upside down version of the original, and it’s the brightest light offered that meets German laws (aka restrictions). Basically, this one’s designed for mounting under a cycling computer and puts the power port in an easily accessible position while there.

Power it from the self contained rechargeable battery, and connect it to the Airstream tail light for single control from the headlamp. Several modes include a low-powered daytime running light, up to brighter outputs for seeing where you’re going at night. 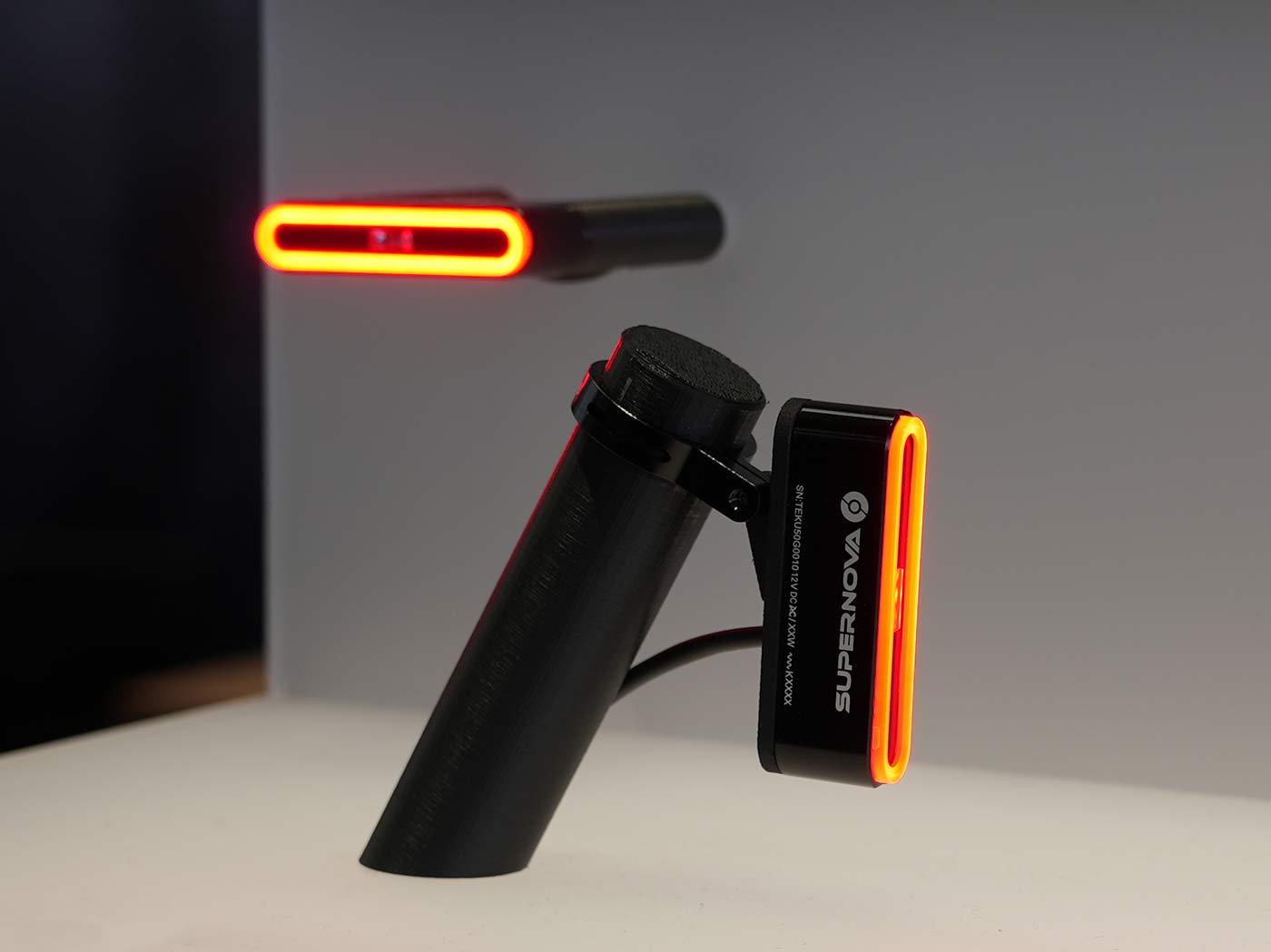 The new TL3 Pro puts 32 LEDs behind a precision diffuser for a perfect glow, but it’s real trick is the integrated motion sensor that activates a very bright brake light when you decelerate. And if it detects an emergency stop, it’ll flash quickly to get people’s attention even more dramatically.