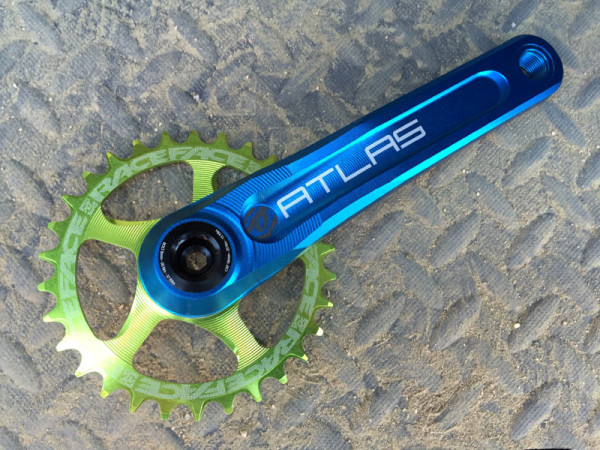 With the Next SL, SixC and Turbine having all switched to Race Face’s spectacular Cinch chainring mounting system, it was only a matter of time before the Atlas alloy all-mountain cranks joined them. That time is now.

The move lets you easily swap between 1x rings and double spiders. It’s more than just the new ring mounting interface, though. The arms themselves are now forged instead of machined, which dropped 33g for the combo of a 34T chainring and new crankset. The cranks are only a hair lighter, most of the weight savings comes from using a direct mount chainring versus the old spider-and-chainring combo.

But, it’s much stiffer lateral thanks to the 3D forged back pocket system. The old I-beam design was stuff up and down, but not as much laterally, so they’ve improved upon the cranks without changing their burly appearance. 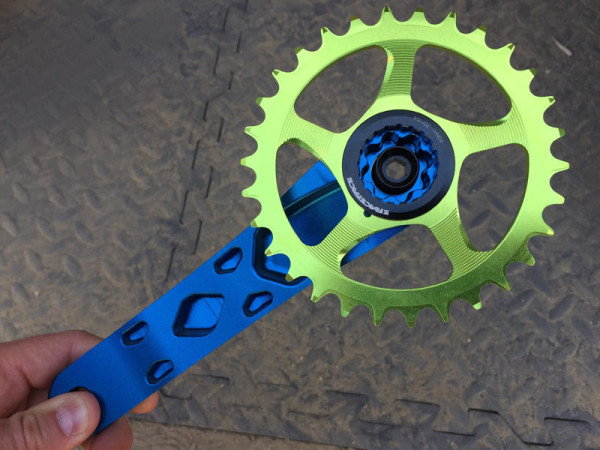 The forged design lets them add the weight saving recesses and stiffer shaping without the added time and energy of excessive machining. 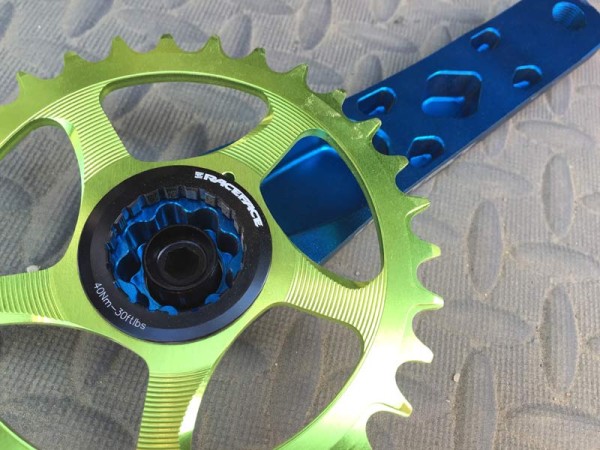 The Cinch system uses an oversized bolt (black piece) that threads into the arm around the spindle’s splines to hold either a direct mount chainring or double/triple spider firmly in place.

If you recall, these cranks were teased a while back with a shadowy image that some folks counted as having 38 teeth on the chainring. Since Race Face’s current direct mount offerings are limited to even numbers from 26 to 36, that raised some eyebrows…so we asked. While they didn’t have anything to show at Sea Otter, turns out they will have 22/24 and 38/40/42 rings coming soon. The smaller range is aimed more at fat bike riders, and the upper end makes them perfect for cyclocross. 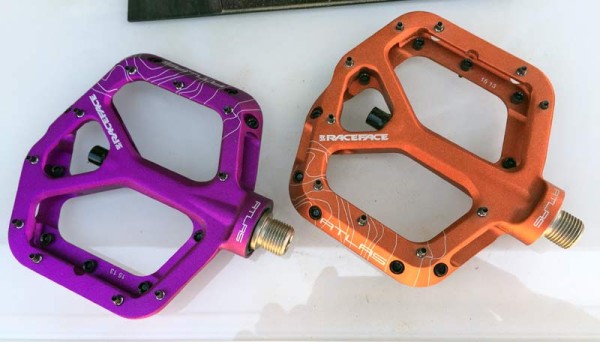 The Atlas pedals gain orange and purple colors, two hues that have been in Race Face’s palette before, and they may show up on handlebars again soon, too.

Now with more pockets for stuffing.

I think its cool that RaceFace is still sticking with anodized color options.

@DC, 2X spider not in question. 11 speed ramped chain rings are. Not interested in XTR cranks as I have been spoiled with carbon (specialized and now the next sl). Do you have any knowledge of ramped 11 speed rings coming?

It all sounds nice on paper, but the reality is a different story. A multitude of choices means producing and stocking them all, which apparently there are shortages in the system. Try finding the exact combination of crank model, arm length, spindle width, and arm color; i.e. Atlas Cinch, 166mm 68/73, red. Nada it seems … found a great price for Atlas 165mm black, but 83mm spindle @ $180. Ok, you think, just swap the spindle. Well they won’t swap it out, you have to drop another $80 for the 68/73 spindle kit (45% of the crank price). Found the kit except with blue arms and that color is a major clash with the rest of bike color components. Sigh …. therein is the rub.

Race Face went all in now changing their cranks to the new modular Cinch design in the engineering & manufacturing departments, but the marketing department is still got their head buried up their “same ol’ packaging mentality” @rses. So the stores buy a kit to get the lowest price and hope it matches what everyone else wants while individual “modular” components still have jacked up pricing. This is ass backwards thinking in complete contrast of what a modular system should be and is screwing all three participants in the long run. The customer can’t find what they need for the appropriate price, the store is stuck with a kit that’s not moving and will be sold for nothing or a loss, and the corporate dimwits wonder why their stuff is not completely dominating the market.

If you want to have a modular system and dominate with market share then you have to price and sell it that way accordingly. The arms, the spindles, the BBs, the gears, etc. all need to be priced competitively and packaged individually. Then you just grab everything accordingly as needed to put together a modular kit that keeps moving product out the door. If more people are buying 68/73 spindle kits and less 83mm spindle kits then the economy of scale gets reflected in the pricing of each, and so on.