Raleigh has a history of introducing new models at Sea Otter and 2015 is no different. Along with a few bikes that are completed and ready for production, Raleigh had two new prototypes on hand that will expand their carbon foot print. Following in the footsteps of the 29″ Skarn full suspension which marked their return to full suspension XC bikes, the next logical progression is to offer it in carbon.

Popping out of the mold just two weeks ago, this current carbon version of the frame manages to drop 300g from just the front triangle. Technically the alloy Skarn already had a carbon seat stay and link, and the Skarn carbon will keep the aluminum chainstay so the weight savings will be limited to the front of the bike. After the first version of the frame didn’t result in the stiffness they were looking for, Raleigh used an interesting rapid layup process that adds layers of carbon directly to the finished frame allowing engineers to tweak the frame characteristics without molding an entirely new frame.

The result is a frame with the same handling, lighter weight, and improved ride characteristics.. The frame keeps with the tapered seat tube for a 27.2 seat post which Raleigh’s Mark Landstaat says has a significant effect on vibration deadening for the frame. Built with internal brake routing and internal routing for a dropper post or Di2 (not both), the pilot run of frames for their racers has already passed ISO 4210 testing and production will begin soon. Raleigh is also working on a proprietary flat bar that adds up sweep in addition to back sweep which Mark says their test riders are really liking since it keeps the front end low, but adds additional comfort due to the hand position. On the gravel side, Raleigh is looking at carbon with the new Roker prototype. Built with the same geometry as the Tamland, the Roker will include thru axles, mounts for fenders, 3 bottle cages, and clearance for 40c tires. Expect to see more on this bike this fall. Pictured wtih 40c tires, there is still a good bit of clearance in the frame. A threaded bottom bracket should make potential customers happy. Continuing their involvement with cyclocross, Raleigh was showing off the new RX W Elite. Meant as the lightest possible bike for women’s racing, the RX W uses cantilever brakes and quick release axles on a carbon frame with true women’s geometry. This bike is meant for racing and the price tag of $2750 should keep it attainable for many. 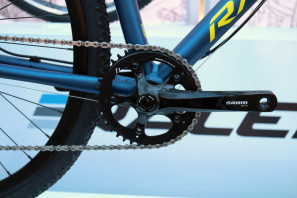 On the men’s side, the RX 2.0 gets a complete makeover with a new aluminum frame that adds thru axles and drops a full pound. Fitted with Rival CX 1, the complete bike will sell for $1800. Along the same lines, the new RXS gets the same thru axle upgrades along with improved wheels and tires. Now tubeless ready with wider rims and tubeless tires, the $1500 belt drive single speed is looking like a killer bike for your 1×1 pursuits.

Will any bike look different than a Specialized for 2016 ??

Canti’s on the women’s bike strikes me as a very poor idea.

@AC, Canti’s were a specific request from Ms. Mani, but what does a National CX champ know.

Ugh, why no bottle mounts on the RXS?!? Spare me the “it’s a race bike” BS excuse. Erwin Vervecken’s bike had TWO bottle mounts and he was a World Champion.

Man, I wish Raleigh USA controlled the output of the bikes worldwide as the ones available in Europe are kind of no fun.

IS this Raleigh RXS Bike availble in India?

Latest News- Raleigh denies knowing the existence of any so called bike company called Specialized. All suspension layouts and designs are original and are not borrowed, inspired, or duplicated from any other bike company on the market.

In a turn of events, Raleigh retracts it’s statement, and claims they have stolen MTB layouts, and Road-bike designs/aesthetics from Specialized Bicycles as Karma for stealing Tom Ritchey’s design for the original StumpJumper.

TX Rider – look close at the right side seat stay, looks like a removeable piece for belt access.

No bottle cages is fine, If I need to drink then I’ll just ride my dedicated SS cross training bike. Because I would never train on my SS CX race bike, that is just silly. The thing that I dont get is this, why do gear CX racers need water but SS racers dont?

This is how the article should have read:
Marketing person to Bikerumor “Whoopsies, it appears that our product guys forgot the bottle mounts when they were speccing this bike. Our bad. I mean, not drinking is so much more enduro!”

Hey, I have that same mainframe on my $600 China bike frame. why re-invent the wheel, right?

Sad that it appears Raleigh doesn’t care about tire clearance. That RX 2.0 still looks like it will have trouble clearing 35s at the chainstays.

The Roker prototype ticks all the right boxes for me!

@Andy, I suspect it could be a duty/US Import concern and an effort in keeping the chainring clearance needed on modern 1x drivetrains’ chainstays while keeping them stiff and hollow enough for internal cable routing.

It’s quite a dance to get:

I think this is why you see dedicated bikes like the Roker move the geo around to accomodate 40mm tires.