31
Support us! Bikerumor may earn a small commission from affiliate links in this article. Learn More

The new SRAM DUB crankset platform launched in early January, it promised to bring their lightest mountain bike cranksets to date, and the end of figuring out which crankset will fit which frame and BB. The design uses a 28.99mm spindle for all BB variants, and they’ll offer the common BB standards to fit around it. This means no matter your frame, you simply get the correct BB and these cranks will fit. No more worrying about BB30, BB386, GXP, etc. But, really, they could have stopped at “lightest” and we’d still have been hooked… Our test set just arrived, and as tempted as I was to request the even lighter XX1 Eagle DUB set, we’ve already put XX1 Eagle and GX Eagle to the test, so it was time for the middle child XO1 to get its chance. Our group arrived with 175mm arms and a 32-tooth X-Sync chainring installed. The claimed 28.99mm spindle gives them an extra 0.5mm per side. That doesn’t sound like a lot, but think about the PF86 BB and how small those bearings need to be to fit a 30mm spindle inside them. Smaller balls mean they’re spinning way faster, the races are much narrower, and the whole system is way more prone to damage from minor contamination.

So, the seemingly marginal gains from 0.5mm larger bearings don’t seem to marginal when you do the math. Using BBinfinite’s PF86-to-30 6706 bearing size of 2.0mm as an example, adding 0.5mm to the diameter is a 25% improvement.

Is that why SRAM did it? And did they do that here? Or are they just trying to block aftermarket stuff for a while. We’ll ask them in person at Sea Otter. For now, this will be going into our next project bike, an XC race hardtail, which we’ll be documenting soon. Stay tuned. Now, back to DUB. 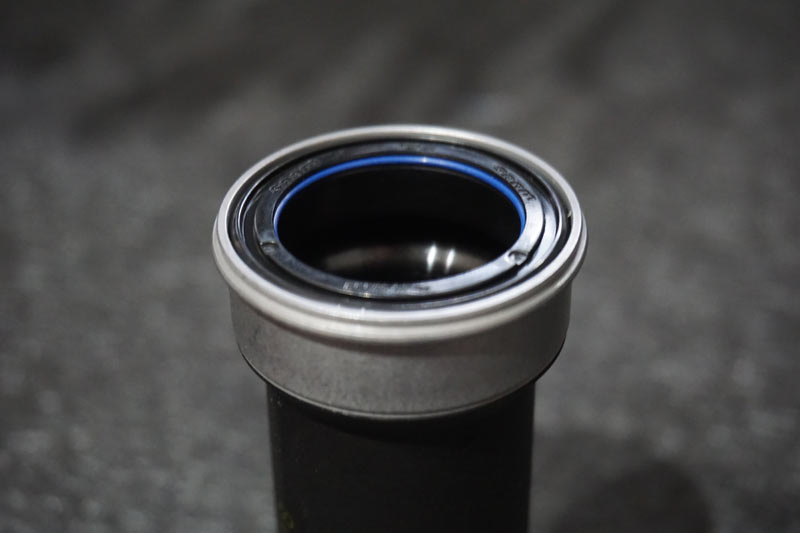 On our scale, the individual parts weigh in at: Altogether now, the crankset with BB weighs in at 550g, which is 53g heavier than the XX1 Eagle DUB with BB we had on the scale in our launch coverage. Total system weight with parts shown here is 1,573g. For comparison, the original XX1 Eagle with BB30 spindle/PFBB came in at 1,565 for the same parts. A visual comparison of the new XO1 Eagle DUB cranks and the original XX1 Eagle cranks reveal no exterior differences in shape, suggesting the additional weight savings is coming from layup and internal parts…and the new spindle.

The takeaway? The XO1 group is now basically as light as XX1 was. Hooray for trickle down! Watch for these parts on our Project XC Race Bike starting next week, which will be heading to the True Grit Epic on March 10 for a real test.

Maybe you could get something with a broadly supported 30mm spindle instead. Maybe that something would be made in Canada with all of the environmental and labour protection that entails. And maybe it would be comparably priced.

Then again maybe not.

Maybe these bearings will last longer than RF. Not holding my breath mind, but it would be nice.

I’d choose a readily available BB over a hypothetically and marginally better .5mm from one supplier any day.

Thanks to Eagle-enabled OEM strong-arming, these freaking things will be everywhere before long. At least the graphics will keep aftermarket demand in check.

Just get a wheelsmfg bb if you don’t like rf….

I’ve only ever had two issues with cranks falling apart. Both of those were Next G4 SLs. Both were bonding issues: one with the pedal thread, the other the driveside spindle mount.

Praxis Lyfts are my new go-tos. But I will give this DUB a try when I build up a new bike this summer.

Small ball bearings is another reason not to put up with PF BBs, I don’t believe external BSA has a similar restriction.

One thing that drove me nuts about SRAM is how they moved their Quarqs from the 3 bolt standard to 8 bolt. Fine, you changed it, it’s better for power reading. I get that. But what drives me nuts is that they didn’t move the rest of their arms to this new standard and only made the “DPrime” ones with 8 bolt. SRAM charges way too much at $400 for new Quarq carbon arms, a ripoff.

That being said, is the new DUB platform 8 bolt or 3 bolt?

It’s a 3 bolt. Otherwise all of their current DM rings wouldn’t be compatible

But they could easily put eight threads in the cranks and only mount three screws when using standard rings, no?

That 0.01 mm is direct humiliation to all the customers intelligence.

No really eh. Just call the dang thing what it is: A 29mm ID bearing! 28.99-29.01mm is the tolerance SKF lists for their bearings in this size range.

Obviously you do not know what tolerance is.

Were the batteries flat in your vernier caliper?

The X01 cranks are foam filled and XX1 is carbon, thats where the weight difference lies.

no one wants press fit bb, what part of that don’t these people get ffs! just stop please!

Actually press-fit works great if you install it correctly the first time. I’ve got Easton cranks on my Scott Addict Gravel and I use Rotor’s press-in BB86/92 30mm ID system with great results.

Unfortunately, 98% of bike shops, even really good ones, do not have the technical and experience to install them correctly the first time.

“if, correctly, first time” see there is the 1 of the problems, Bsa screw it in, done enjoy no phd required

I guess I’m a hack, but I whack my cranks on a lot of rocks, and I prefer to stick with alloy. Will Sram have any high-quality alloy cranks available with DUB?

The GX version is out in aluminum with dub.

As opposed to the current state of affairs in BB/crank interfaces?

This move actually reduces the SKU count for cranks (only DUB vs BB30 and GXP). The cost of carrying a few extra BBs is nothing compared to the savings from not having to stock multiple versions of cranks that cost a few hundred each.

Generic complaint about something changing to make it better or lighter! Random comment about something I used to own that worked flawlessly for 15 years! Sly innuendo implying I’ve been at this longer than you have. Blah blah press-fit BB’s, I heard about one that caught on fire and killed a girl! I’m not against changing things but I hate it when they change things.

Um… There is a pretty solid group of people who’ve had real problems with PF.

Can you cut a BB in half? I would love to see a cross section of their improved sealing design.

Correct me if I’m wrong but isn’t the extra 1mm used for sealing while the actual bearing remains 30mm ID? If not it mean completely custom bearings at I don’t think 29mm ID is a stock size. It that’s the case there would be no ball size improvement.

i had a look in person at them and the bearings are still 30mm ID and exactly the same as they always have been. the difference is……

they have put a plastic seal/spacer/shim in to get the axle down to 29mm just like shimano does to take a 25mm bearing down to 24mm axle. the reason?? well when the bearing seize it wears out your cranks and SRAM have probblay got sick of replacing them under warranty so this bit of plastic copied off shimano et al solves the issue.

2 steps back and one forward and all that. its hardly revolutionary!

So no improvement to ball size. Just sealing…

And presumably there will be no Q156 cranks in DUB if it’s meant to “fit everything.” 🙁