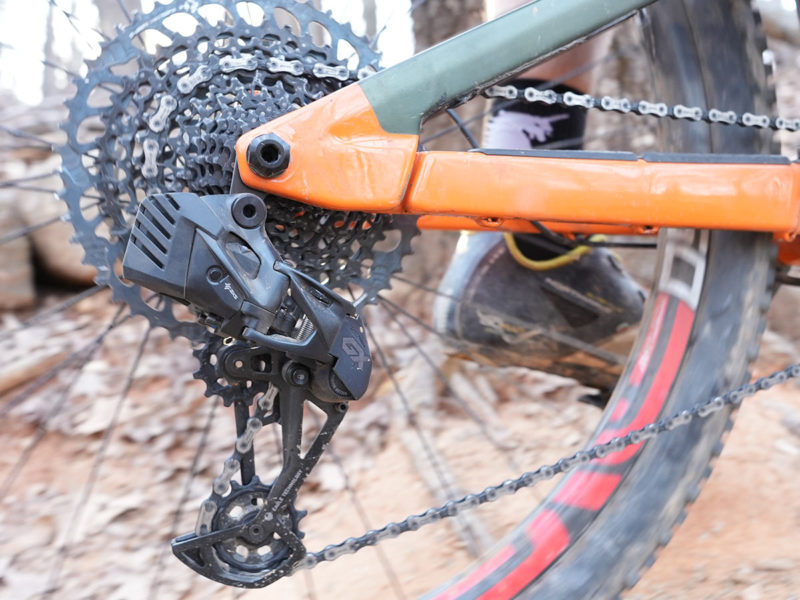 The real question with a lower priced group is always “How well does it work compared to the top models?”

We’ve been riding two sets – one on a mountain bike with a full GX Eagle group including cranks, chain and 10-52 cassette, and one on a drop bar bike pairing the GX AXS rear derailleur, chain, and cassette with a Force eTap AXS shifter set and cranks. Here’s how they ride…

In this video, we’ve got closeups of the shifting, how the Overload Clutch works to recover from a hit, and even a little slow motion. If you’re looking for a quick overview of what’s new with GX Eagle AXS and want to see how it performs, this is it. 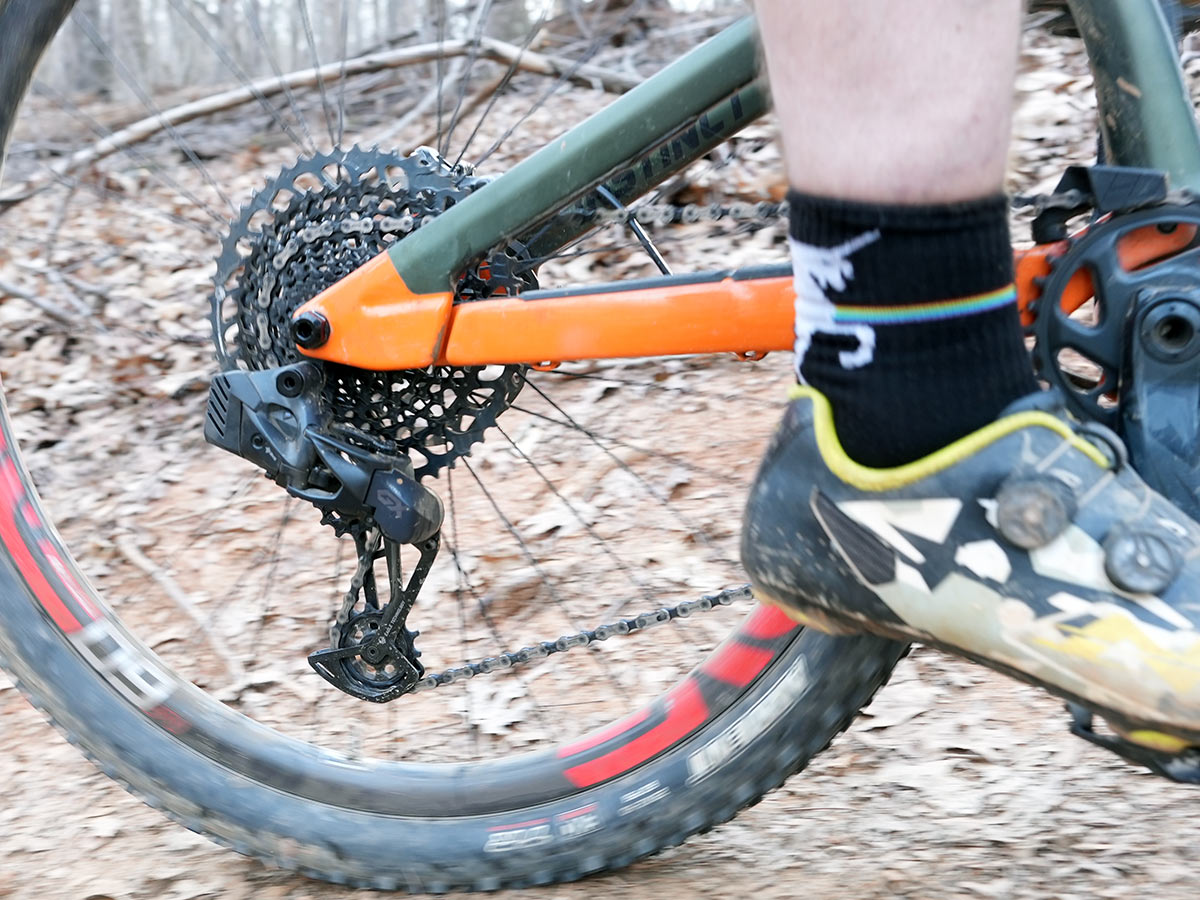 We slapped the new GX AXS derailleur and shifter on the same bike we’ve been testing the original GX Eagle group on since last summer. It’s as easy as it sounds…

Just open the chain’s quick link, swap the derailleur and shifter, press the buttons to sync them, and we’re off and riding. It took longer to pull the internally routed shift housing out of this Rocky Mountain frame than it did to do all of the rest. 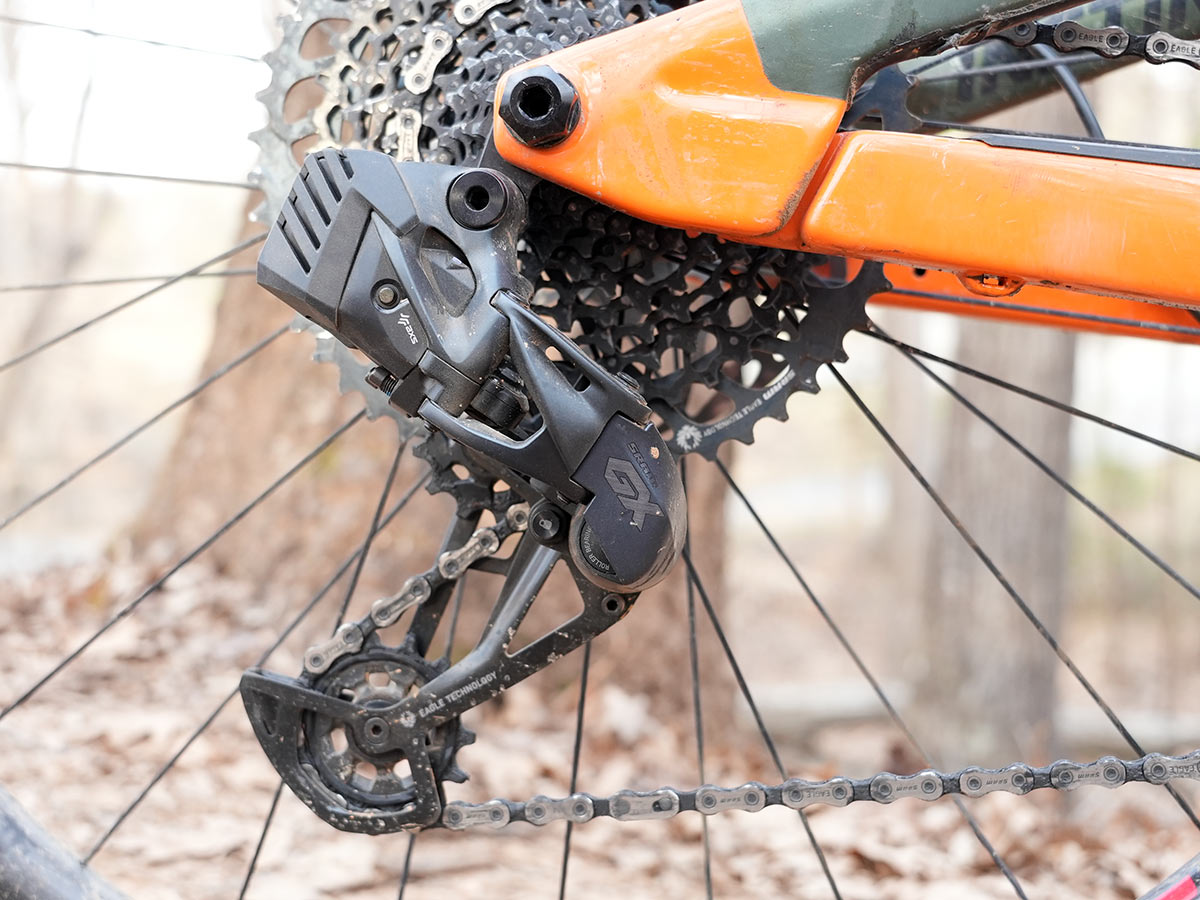 Even with the cassette having 8+ months of hard riding on it, the AXS derailleur provided its trademark crisp shifts. It’s strong, giving the chain the force it needs to move even under fast or hard (or fast and hard) pedaling. 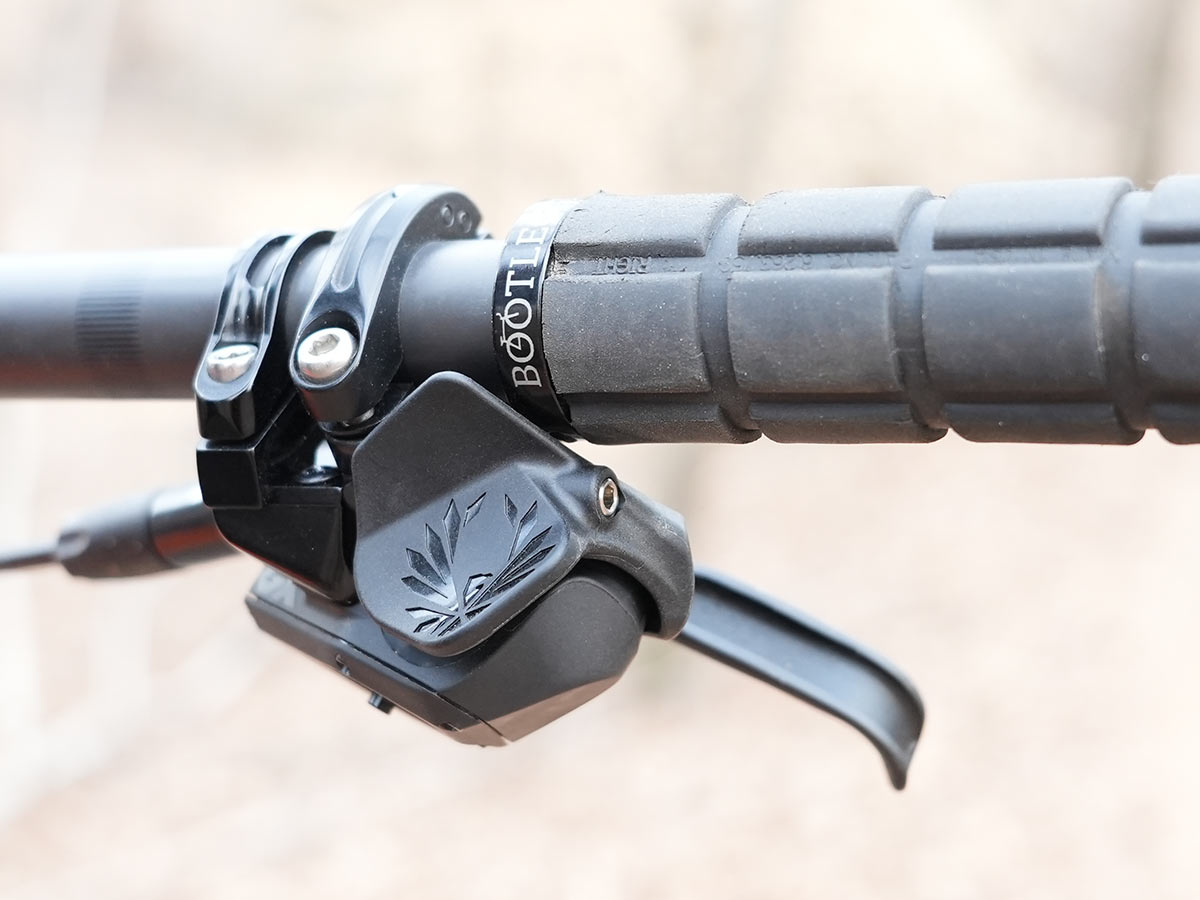 The shifter took a bit of rearranging to install. Compared to the mechanical shifter lever, we had to move the clamp inside of the brake mount. Sorry SRAM, but our test bike is running non-SRAM brakes, which actually provides a good test of cross-brand compatibility.

We really like that SRAM’s shifters have two mounting positions built in, and their Matchmaker brake+shifter mounts offer left- and right- positions (you may have to ask your shop if they have any old left-side ones laying around, though), which provides a wide range of position adjustments. Which is key, because we’ve had to fiddle around with the parts to get things exactly where we want them.

On this bike, we noticed that the paddle had to be aligned just so between the brake lever’s clamp and the grip’s lock ring. These are admittedly fat grips, but something to be aware of. The upper tip of the paddle shifter comes pretty close to the bar (see it in action in the video), so you need adequate clearance. Or a Dremel tool. Or buy the optional AXS Rocker Paddle and swap it in. 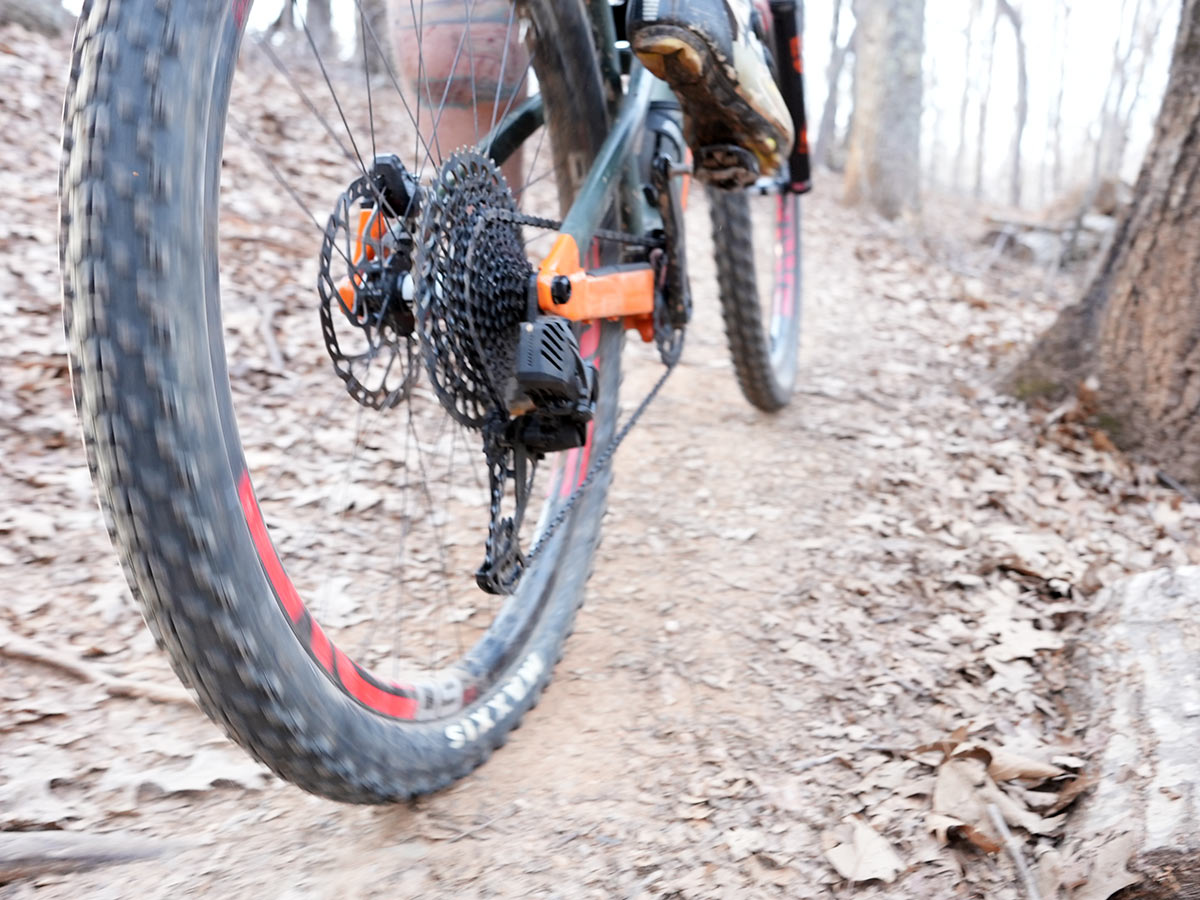 Just like the other Eagle AXS wireless derailleurs, the more affordable GX variant shifts very well under power, up hills, in both directions. Our tester found the shifting immediately intuitive after having ridden mechanical shifting forever, and appreciated the light touch required to shift under any circumstance.

Having hopped on his bike, and having ridden AXS since it launched, I can say that there’s no discernible difference in feel or performance, and only a slight weight penalty. For mountain bikers wanting the latest tech at a relative bargain, GX AXS is worth a look. 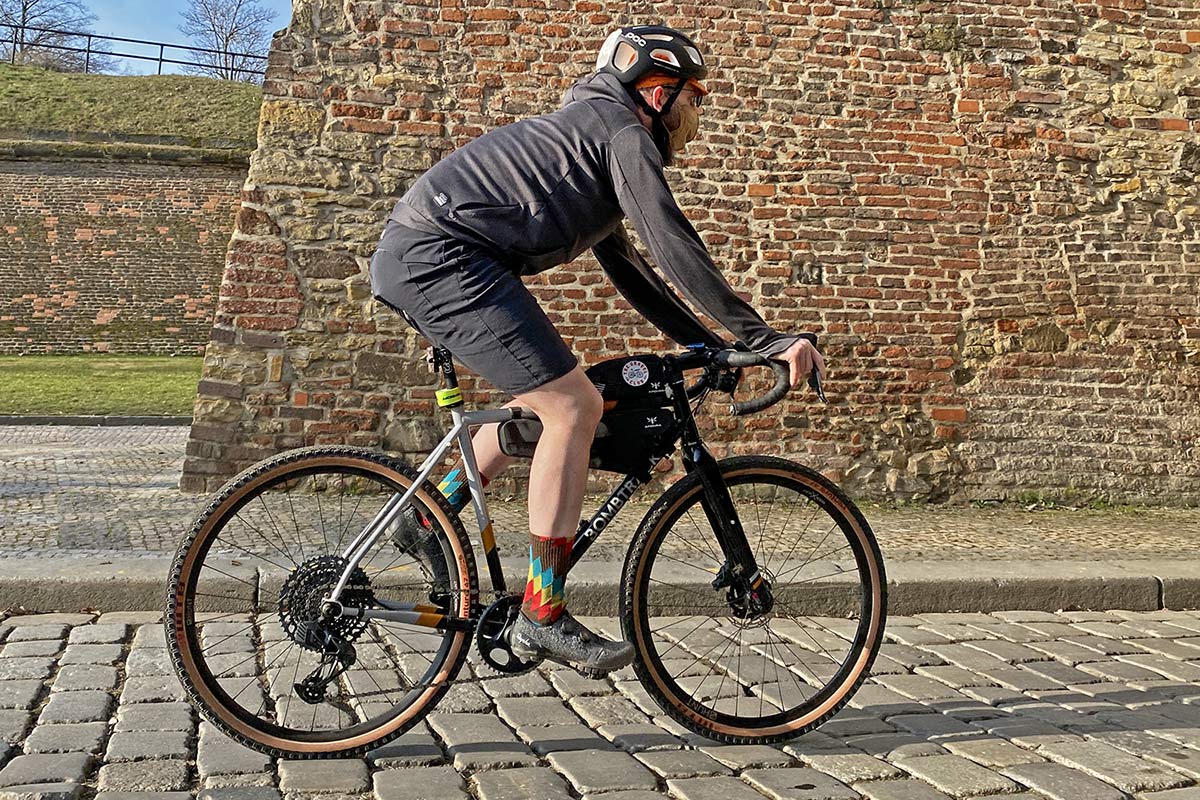 GX AXS is compatible with the original 10-50 and latest 10-52 cassettes…with any 1x front chainring. So, as many of us have found, they make for a great adventure bike build pairing SRAM’s eTap AXS road bike shifter levers with Eagle AXS rear derailleurs and cassettes.

Within the AXS universe, almost* everything is cross-compatible. Cory paired a GX AXS derailleur with a set of Force eTap AXS shifters for a more affordable adventure-ready gravel “mullet” setup.

Setting up a 1x AXS drivetrain is possibly the most rewarding bike build process you can have. Simply snapping the battery into the rear derailleur, you can pair shifters and start making the derailleur jump back-and-forth, even before you bolt it onto the bike! 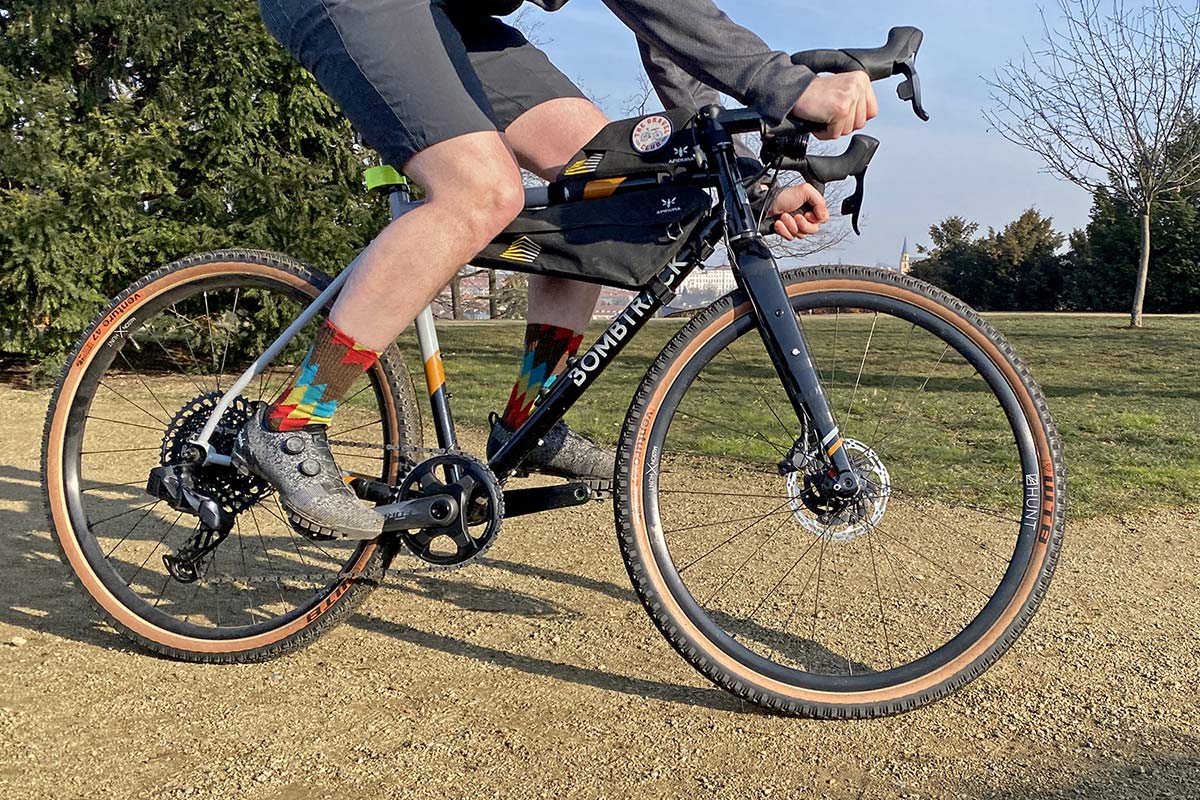 Install is crazy simple, but don’t let your guard down during setup. Proper limit screw and B-screw adjustment are key, but also made easy with the included chain gap tool. Shifting across such a big cassette means derailleur hanger alignment is more important than with the max 32T cassette that I took off my Bombtrack Audax. But, after spinning up the Hanger Genie, Unior had everything shifting perfectly.

All set up, the GX + Force AXS Mullet build is just what I was looking for. The GX AXS derailleur shifts quickly up and down the monstrous cassette even under a decent load. And with a couple of Blips wired in next to the stem, I can shift easily no matter where my hands are on the bars. With a 44T chainring upfront, the massive GX Eagle 52T cog has me crawling up some truly steep off-road hills, while the 10T seems quick enough even on most longer downhills.

The top-end is ultimately a bit lower than the road compact 50×11 gearing this replaced. But on the easy-side, it’s much lower than the old 34×32 combo. That’s exactly what I was looking for. And I’m now looking forward to loading the bike up and heading off on a bikepacking trip now that spring weather is coming back to Prague. 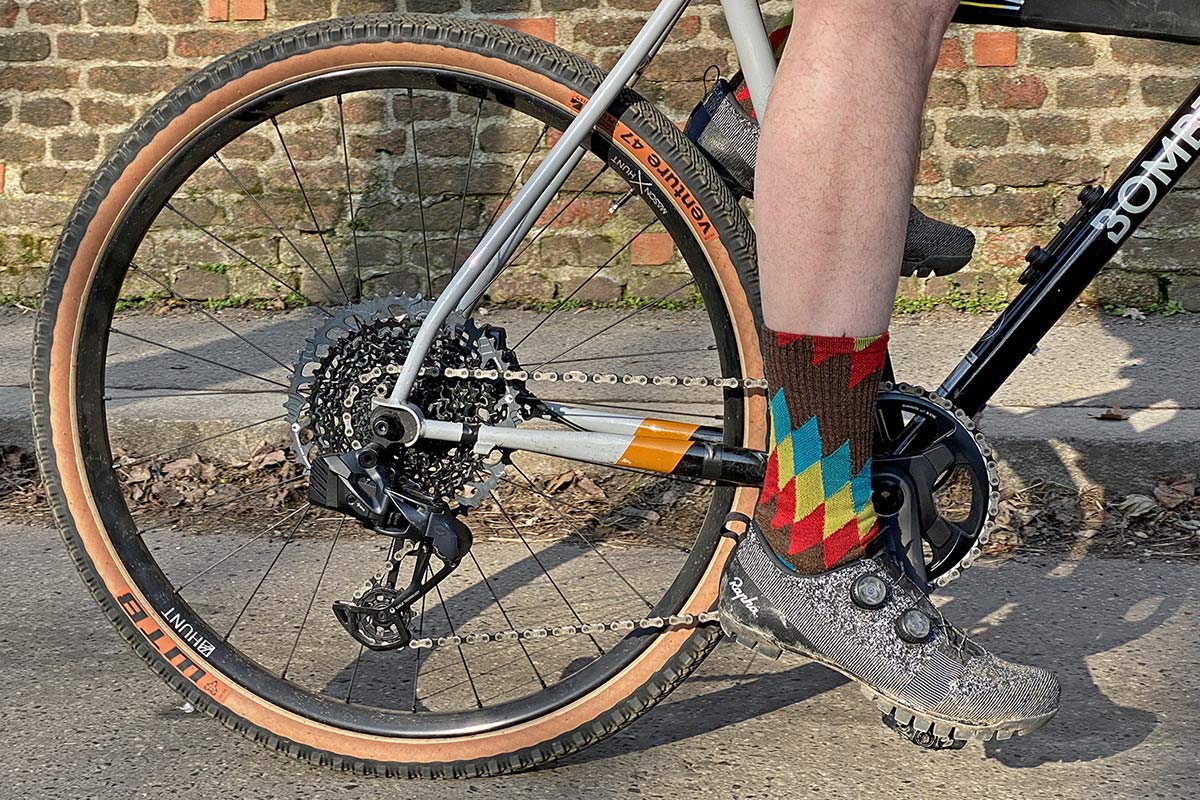 *The only parts that aren’t cross compatible are mixing the FlatTop 12-speed road chains with mountain bike cassettes (use their MTB chain), or putting a 2x front chainring combo with an Eagle MTB setup…the rear derailleur can’t handle that additional spread.

Side note: I could theoretically charge the battery off my Hunt Dynamo front wheel & Sinewave Revolution USB-converter if I stay in the same gear while riding fast for a while…or just bring a spare. But with 20+ hours of claimed ride time per charge, there’s no real worry about running out of juice on a ride. 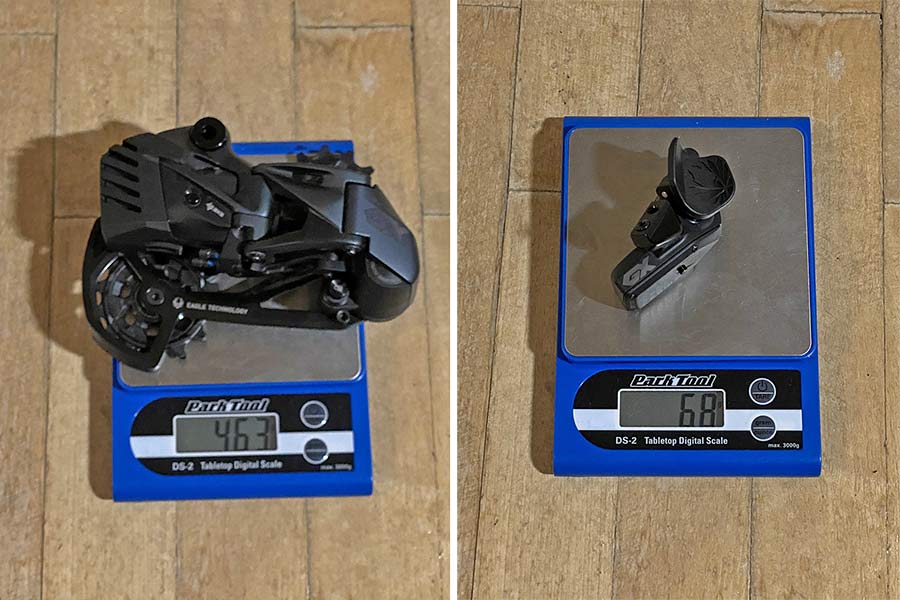 The complete GX AXS rear derailleur weighs in at 463g with battery (25g) and protective cage (10g) installed. The GX AXS shifter, with coin cell battery installed, is just 68g. You’ll add a few grams with whatever mount you choose for the shifter.

The cranks, chain, and cassette carry over unchanged. For comparison, here are actual weights for all parts, including the mechanical derailleur and shifter: Learn more at SRAM.com and check the price on Backcountry.com.

For the shifter clearance, I recently found that an aftermarket clamp (found on Amazon for under $10) holds the AXS (with rocker panel installed) in a much better position with out having to grind or file anything down (w/XTR brakes). Otherwise, if this works as well…going to be quite a few folks with $1000 AXS upset about paying more when possibly the only real gain (with loss) is in the super cool cassette XX1 offers (-112gm on my scale under GX)

@None Given, Not sure the GX AXS will have any real availability soon in current times… So $1k still sounds good for riding yesterday.

i think you need both force axs shifters to shift, but otherwise yeah force axs can be paired with gx, or anything axs really.

Does the mtb xtr break system work with the force etap