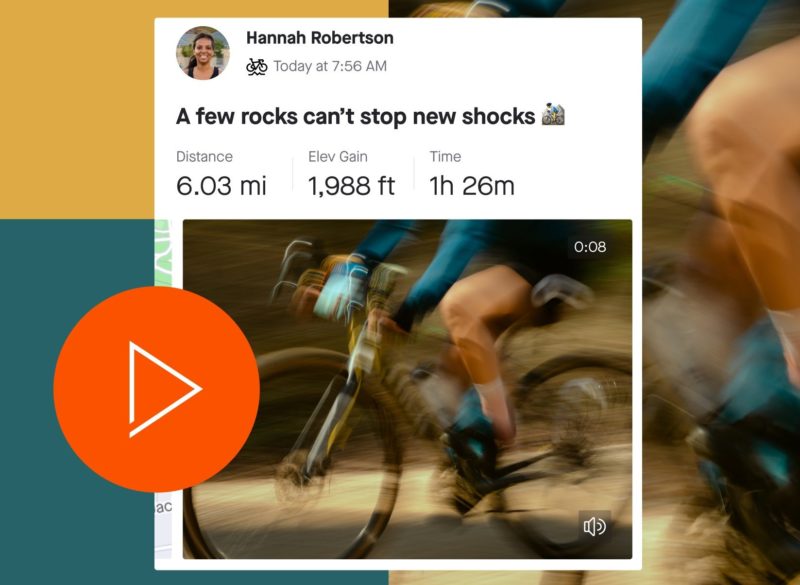 Last week, Strava rolled out some big improvements to their platform, particularly for the off-road obsessed. But if you happened to catch the live stream of the announcement, you may have also caught the mention of something that many users have been waiting for – video.

That’s right, today Strava is officially announcing the rollout of their new video feature which will be available to all athletes. Strava notes that the feature will be available to all, over the next few weeks, though everyone can see and watch other videos starting today. Strava will be scaling up the rollout to allow everyone the option to upload video, though that might not be complete until the end of June or so. I can confirm that I just updated my app today, and the video function is working so keep checking your app for updates if you’re waiting for the day you can share your ride in video form!

The new feature works just as if you were adding photos to your ride, only now the app prompts you to ‘add media’ instead of just photos. From there you can upload any video, though the app will limit clips to 30 seconds. If the video is longer than 30 seconds, it seems it will just automatically trim the clip after the first 30 seconds of the video. It also works with videos taken in portrait or landscape and the videos will start auto-playing without sound as you’re scrolling through the media files of a ride. Though you can also click on them individually to play the sound and send the video to full screen.

Additionally, Strava has added the ability to produce an Embed Code for your activity if you’d like to share it with the world on other platforms. Strava provided a few examples of the new video format with Andrea Ference’s Swiss hike above, and Adrian Ballinger’s first-ever ski descent of Makalu below.

As Adrian’s activity shows, you can edit multiple clips into a single 30-second clip before uploading them to Strava if you prefer that over a continual 30-second clip.

Finally, Strava added the ability to mention and tag other athletes in activity descriptions so you can share the adventures with even more of your friends!

Dont want to be that folk who criticizes anything but it’s a shame strava prefers to be a “fitness tiktok” where you will ser a lot of shaking videos soon instead gives upgrades for users.

There’s a lot of small but significative improvements wich could came before videos.

The equipment management have a lot of Room to become a very handful Tool – you still can’t assign a rear Wheel you use for a roller or keep saved the last 4 tires or chains so you could calculate an average lifetime of the tools.