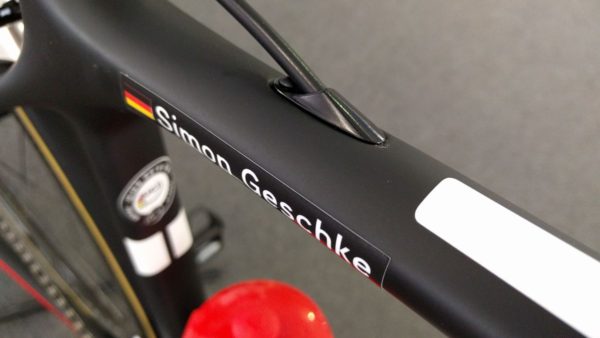 For 2017, Giant-Alpecin undergoes several changes in the named sponsor department. Alpecin have departed and joined forces with Katusha, while the Giant name takes a back seat to Sunweb, but remains as the team’s bike supplier. If you’ve heard of the name Sunweb, you’ll know they have recent history in the world of professional cyclocross racing.

The virtues of the Giant TCR Advanced SL are pretty well known, and all of the team at the 2017 Tour Down Under was aboard this bike. In the past, we’ve seen riders on these and the Giant Propel, so perhaps their is a new aero bike in the works for Giant? The company’s other bike, the endurance-themed Defy Advanced SL, is likely to appear when it’s time for the Classics. Click for more of Simon Geschke’s Giant TCR Advanced SL… Simon Geschke is a 30yo professional German road cyclist, and is best remembered for his win on the mountainous Stage 17 of the 2015 Tour De France into Pra-Loup, solo. Though there are many more achievements on his palmarès. The team bikes change from blue to red highlights in the 2017 livery, along with small changes relating to component brands. Shimano remains as the team’s drivetrain and wheel supplier, with deliveries of the new 9150 / 9170 Dura-Ace Di2 systems expected early in February of 2017. This change extends to the team’s computers, the Giant Neostrack GPS. The Neostrack may be branded Giant, but we believe it is a rebadged Bryton 530. Developing a new computer is no easy undertaking, even for a company the size of Giant, so a rebranding would make sense. The computer is capable of display Di2 gearing information and should be available to the public sometime in 2017. Pioneer currently outfit the team with power measurement technology, but this may change with the imminent release of Shimano’s own power meter system? The Shimano Dura-Ace 9070 Di2 rear derailleur will soon be relegated to the archives when the 9150 model is released. 11-28 cassettes are standard fare these days on many pro bikes. Continental was the #1 tire supplier during the 2016 WorldTour season, but Vittoria has made inroads for 2017, with several teams, including Sunweb, rolling the latest version of the company’s Cora tire in. 25mm wide becomes the new 23. The Giant TCR Advanced SL is one of the few pro bikes still running an extended seat mast with post topper. Elite’s Cuissi Gel bottle cages are a departure from carbon and fiber-reinforced material cages so prevalent on the bikes of other teams. Shimano’s C35 or C50 tubular carbon wheels remain the choice for Sunweb in 2017.