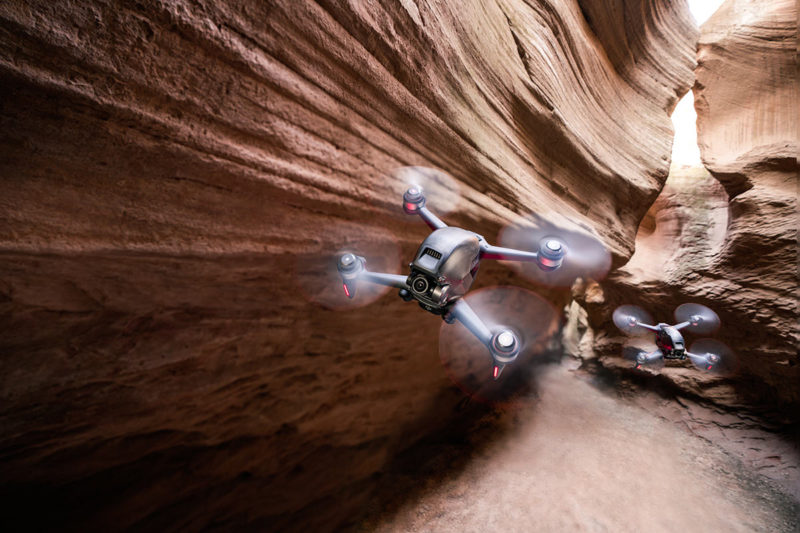 The all-new DJI FPV drone gives you more intuitive motion control and HD goggles, completely changing the way you fly and film from the air. It flies like a racing drone, hovers like a camera drone, and accelerates and stops faster than anything they’ve made before.

DJI has been making FPV (first person view) goggles for their drones for years, giving users an immersive view of what the drone sees, but speeds up the transmission for a virtually real-time, reliable transmission. 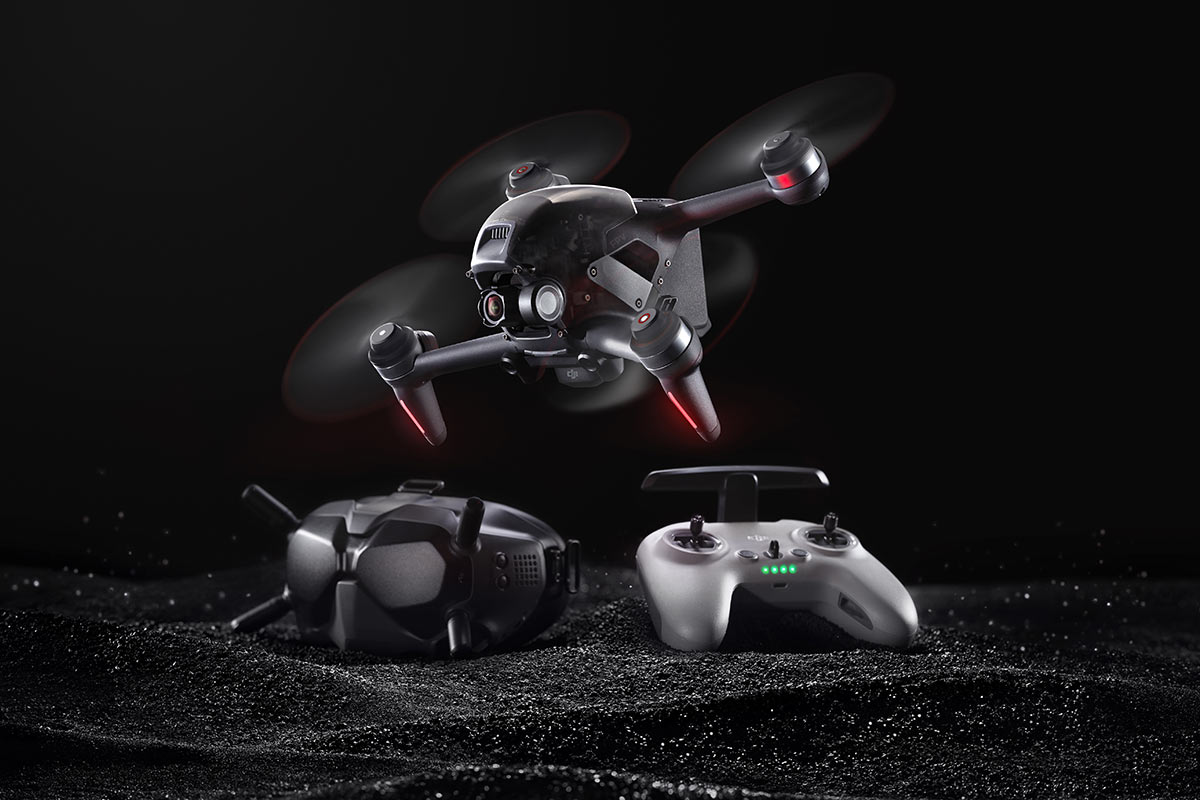 Built around a combination of drone, goggles, and controller, there are two things that immediately set the new DJI FPV apart from its siblings: The looks, and the optional Motion Controller. 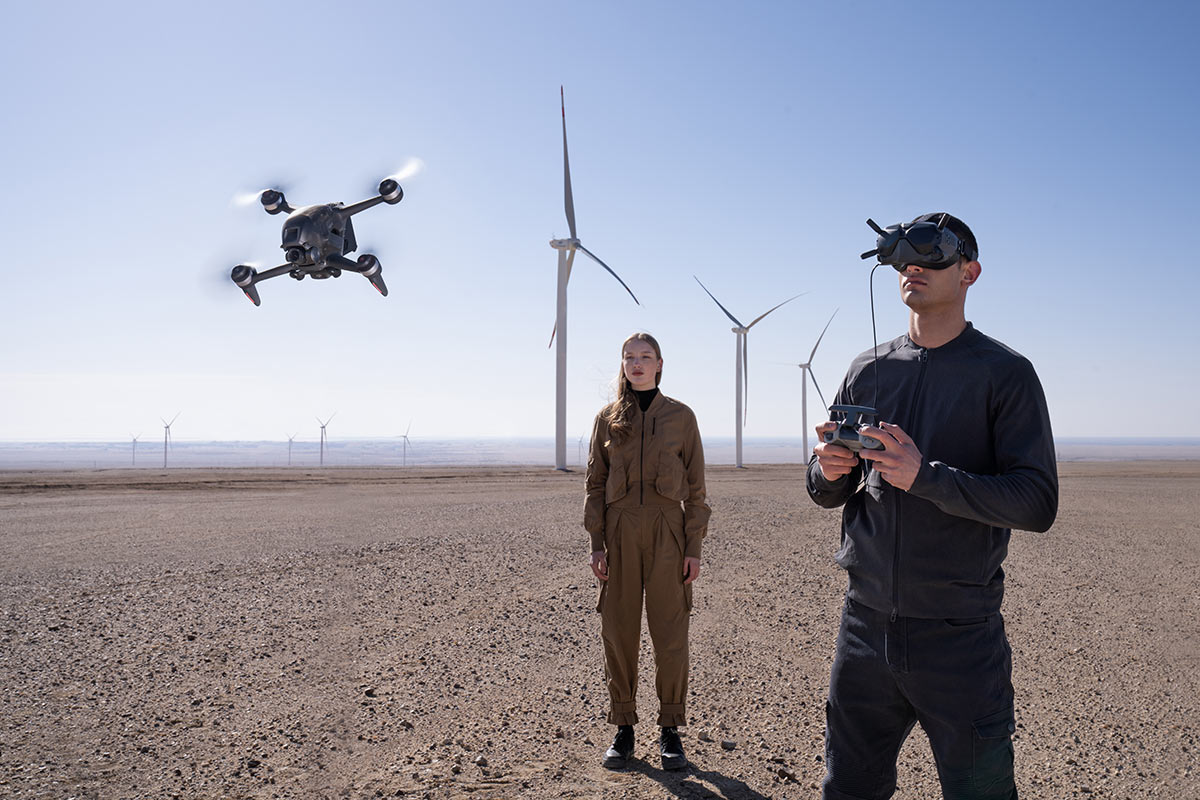 Besides the bug-like spaceship looks, which allow the drone to hit speeds of up to 87mph (140km/h), accelerate 0-62mph (0-100km/h) in just 2 seconds, and fly more like a racing drone, the big differences are in the new flight modes and features.

Higher performance motors are used to allow better maneuverability, and they added an Emergency Brake feature that stops the drone in place and keeps it hovering.

It has a 10km flight range while still delivering an HD feed to the goggles and using auto-switching dual frequencies with 50Mbps transmission rate and built-in anti-interference tech. Other key flight specs include: 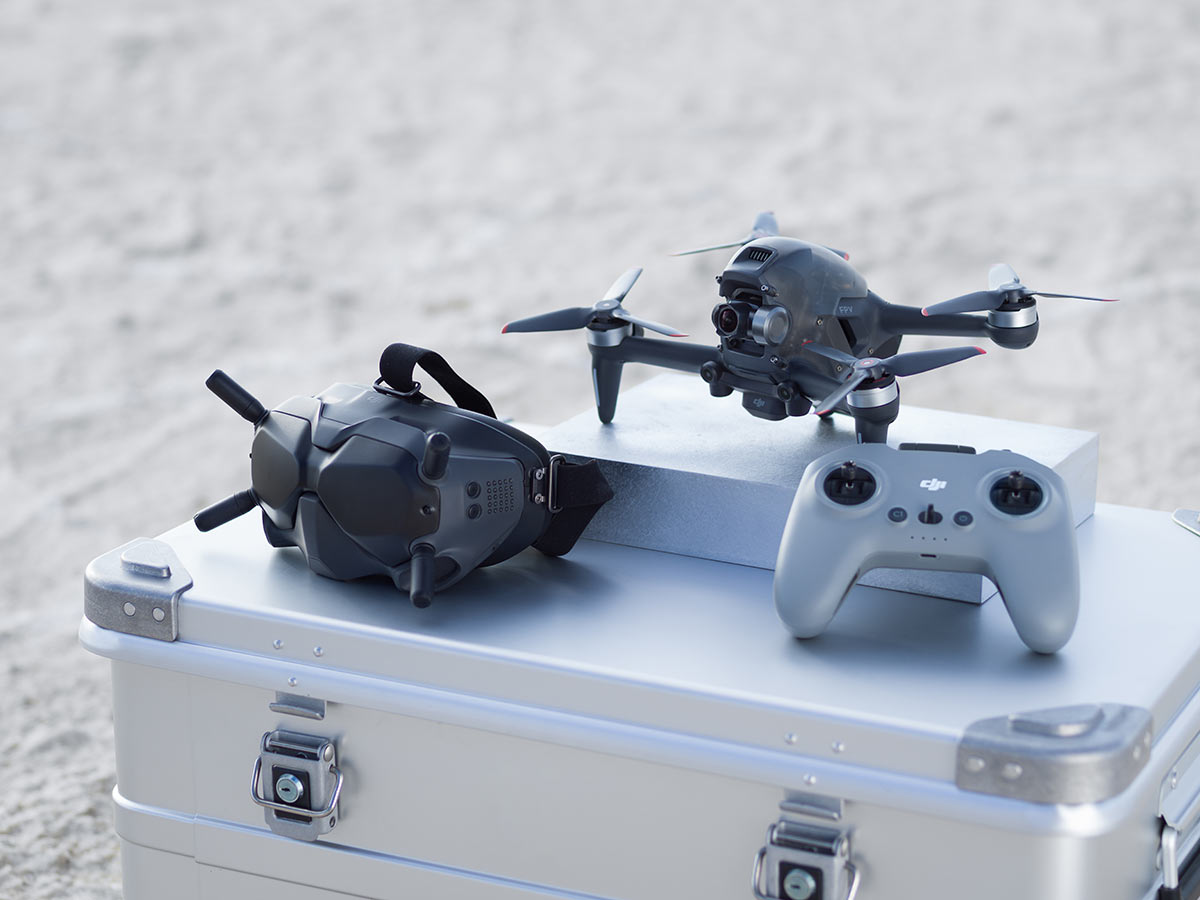 Their Failsafe Return to Home feature lets you hit a button and have the drone automatically fly back to you (or another preset “home” point), and it communicates with ADS-B systems to protect the airspace. 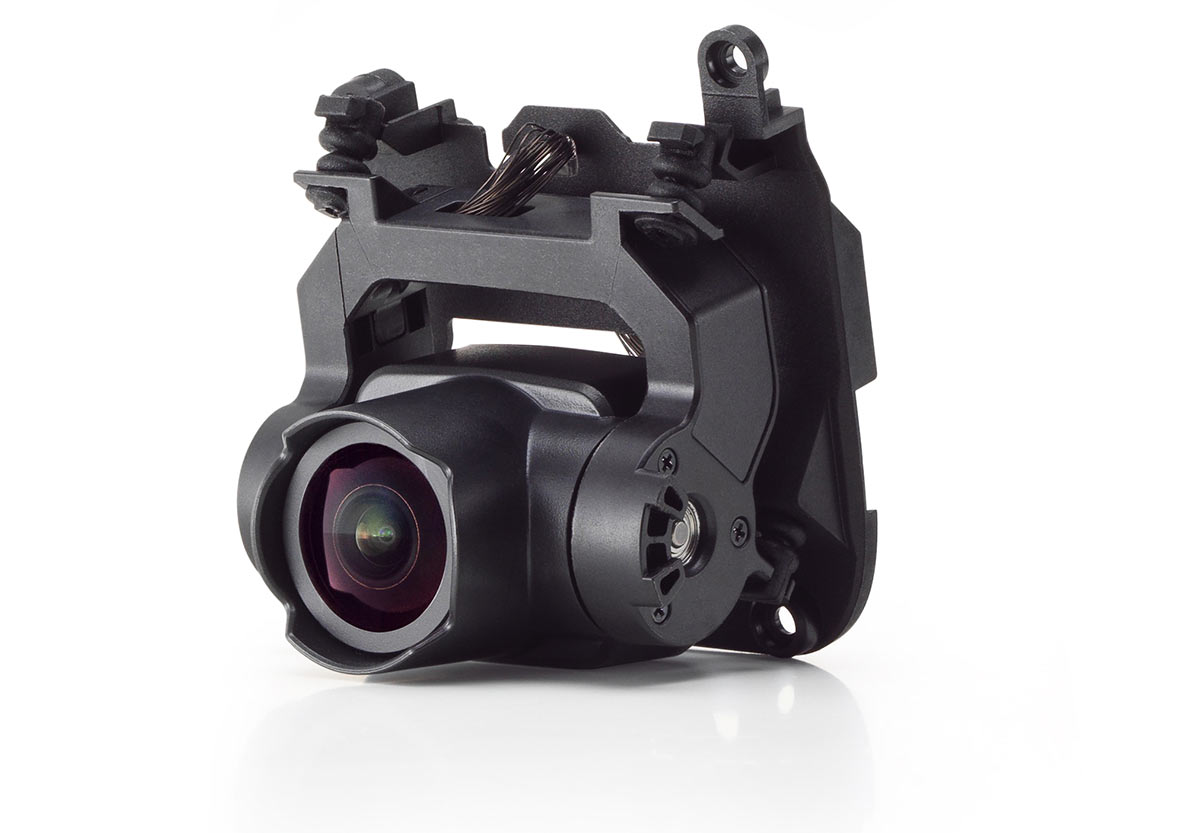 The single-axis gimbal is a bit different than on the Mavic series’ 3-axis drones. This helps stabilize the footage, but gives it a more realistic tilting effect as you wind through the canyons (chasing womp rats, perhaps?).

The 150º FOV camera records up to 4K/60fps at 120Mbps, or slow it down to 1080p/120fps. It packs their RockSteady electronic stabilization to fix shaky footage, and even corrects the distortion typically found in wide-angle lenses. 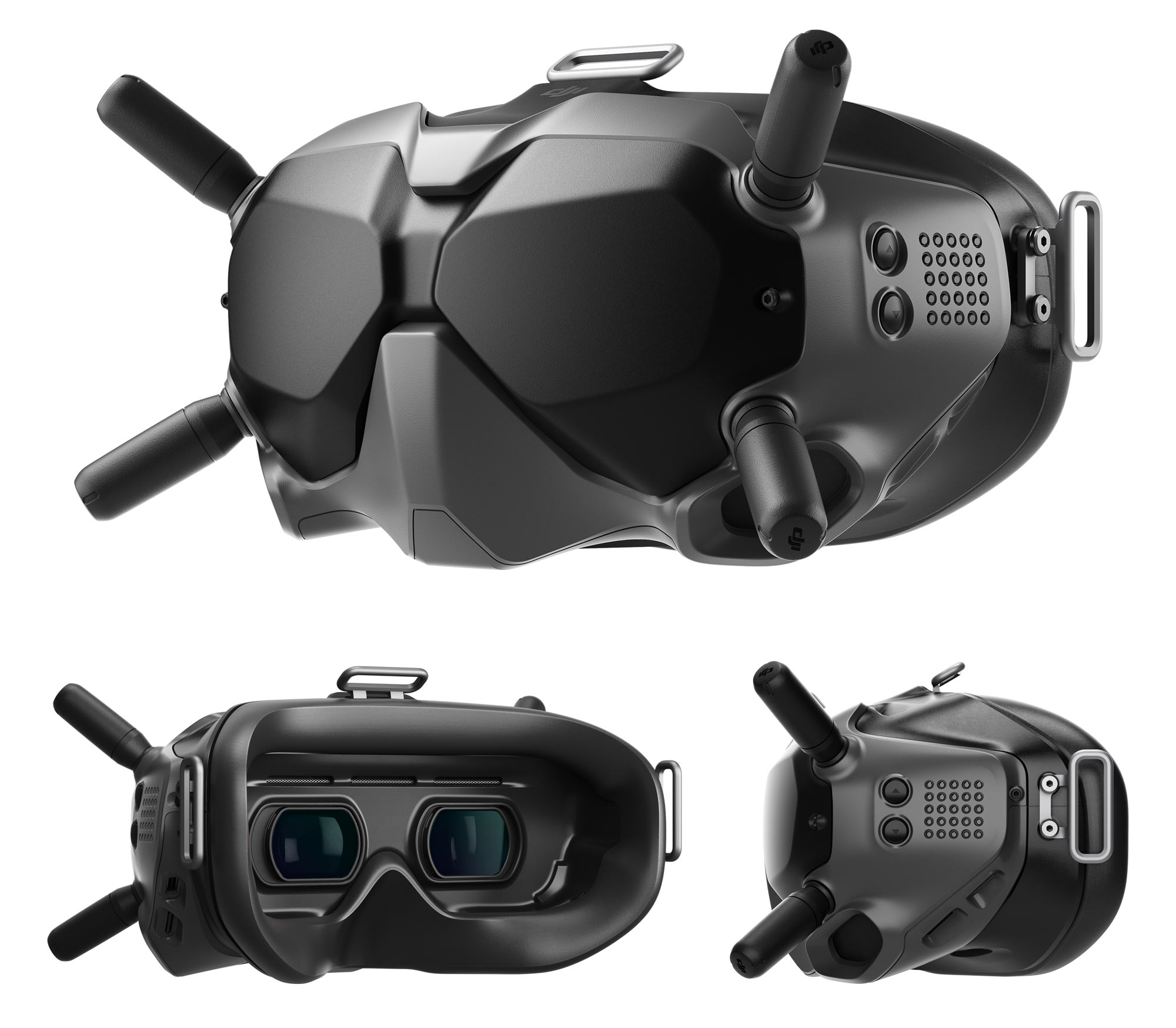 Pilots can choose between Standard and Smooth viewing modes, the latter having higher frame rates (but presumably killing the battery a bit faster). They can also choose between FOV and frame rates, here’s the details:

There’s also a new Audience Mode that lets you stream the POV footage to up to eight additional goggles, so even onlookers can experience the flight. 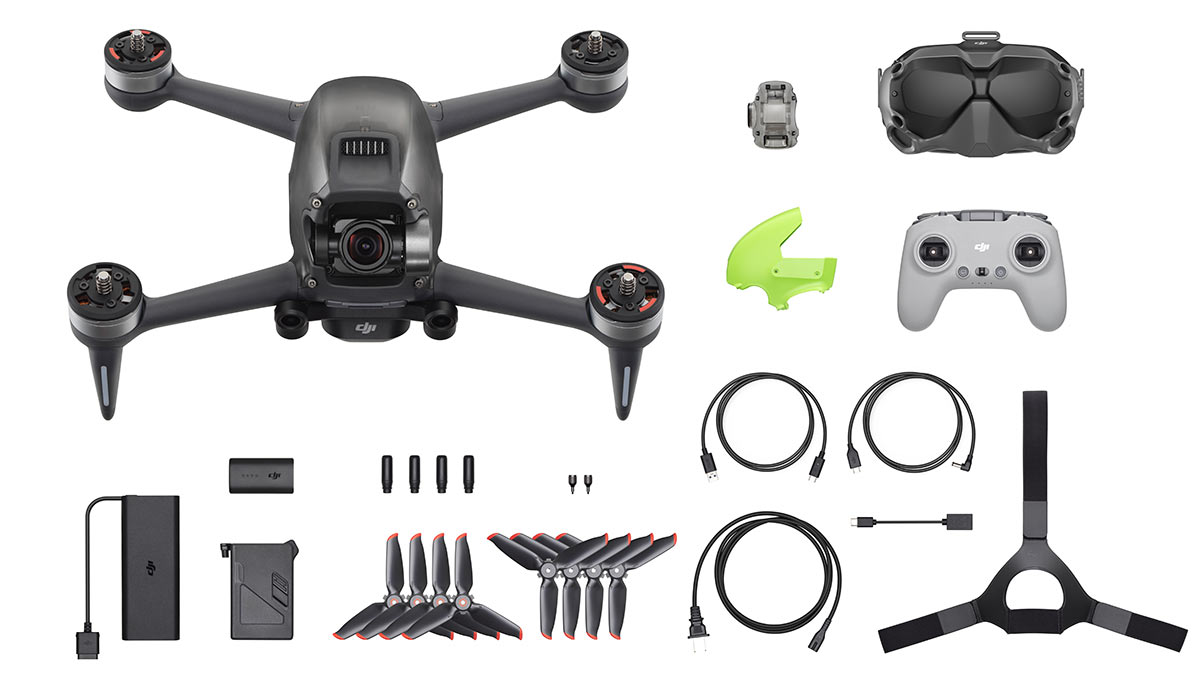 The DJI FPV drone will retail for $1,299 and include the drone, headset, standard controller and one battery, plus charging cable. The Fly More kit adds two more batteries and some accessories for $299 more.

The standard (included) controller has an interesting button layout, but it’s the optional $199 Motion Controller that you’ll really want to add…

The Motion Controller uses accelerometers along with a trigger and thumb pad to control the drone’s flight. Buttons and a slider give you control over the camera’s tilt and recording.

If you’re never flown a drone using the standard remote with two joysticks, there’s a definite learning curve to remembering which stick does what and in what direction. This Motion Controller should prove much more intuitive.

The FPV definitely seems aimed at the sport user over the cinematographer. Its speed and maneuverability will allow for amazing footage that few (any?) other drones can match, but there are some noteworthy features missing as well.

It’s important to note that the DJI FPV only has forward and downward sensors that look up to 18m and 10m out, respectively. But, unlike the Mavic series, it will only alert you to obstacles and slow down, it won’t automatically avoid them for you.

And, because the camera’s gimbal only uses a single axis (versus the 3-axis camera on the Mavic series), the lack of horizon-leveling means flying sideways alongside the subject will give you a tilted video (you can see it in the launch video at the top of this post). While that can be cool for action, it suggests this drone leans more toward sport use and capturing insane action than for videographers seeking the most control over their shots.

Available now direct from DJI, at Best Buy, and on Amazon.

Wow. This is what we’ve all been waiting for . Too bad battery technology is still the bottleneck as well as legal regulation at least where I live

That thing is so fast! It must be amazing to take out into the desert and just fly around. Too bad the price tag is so high.