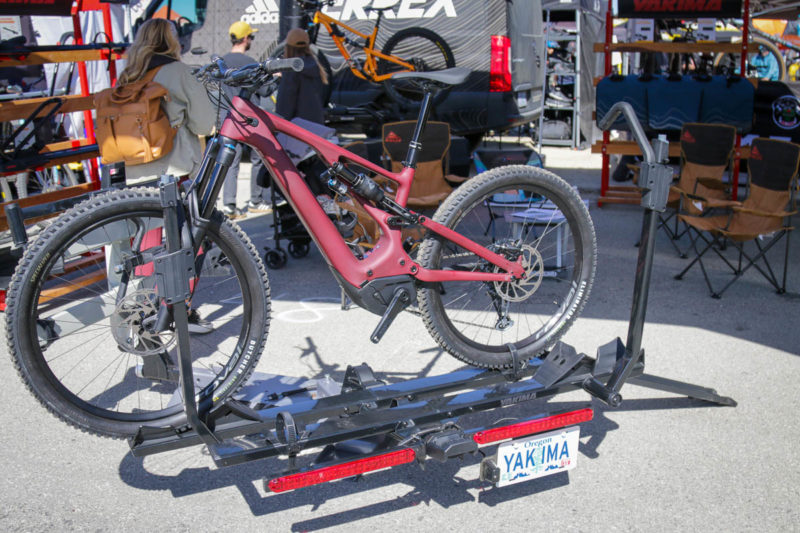 It’s taken a while, but it seems like bike racks in the U.S. are catching up to their European counterparts. Well, at least in terms of lighting, that is. That’s probably because having lights and a license plate holder isn’t a requirement in many parts of the U.S.—or it is a requirement, but generally isn’t enforced. However, to improve vehicle safety when carrying bikes, and give police one less reason to potentially pull you over, more brands stateside are offering racks with integrated lighting—like the new Yakima StageTwo with the optional SafetyMate package. 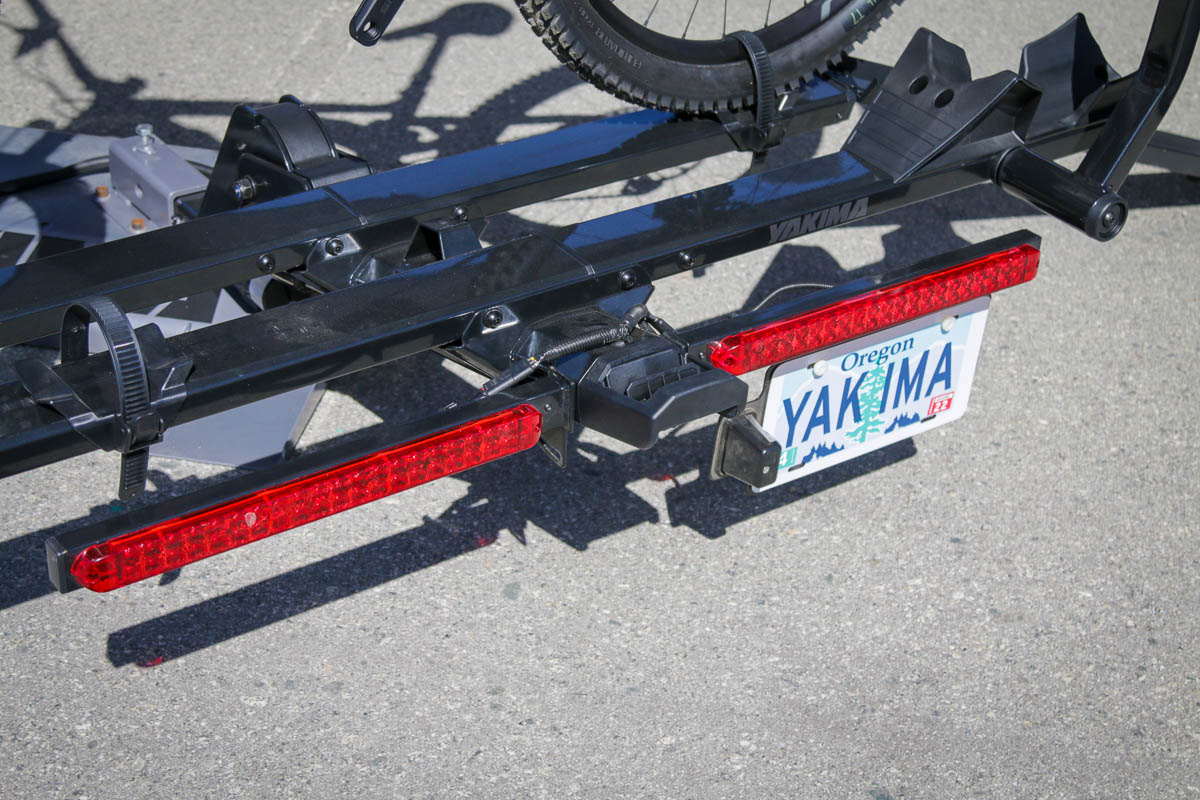 Yakima is taking an interesting route here, as the lights aren’t included in the base model StageTwo. Instead, they’re offered as an additional accessory package that sells for $219. That package includes full rear lighting with tail, brake, and turn signal lights along with a rear license plate light for the external license plate bracket. We’ve seen new racks with lights from Kuat and Saris recently, but both of those omit the rear license plate holder which may or may not be needed. The whole point to any of this is that a bike on a bike rack can block your taillights and license plate. Repositioning them keeps them visible, and keeps you legal depending on the local laws. 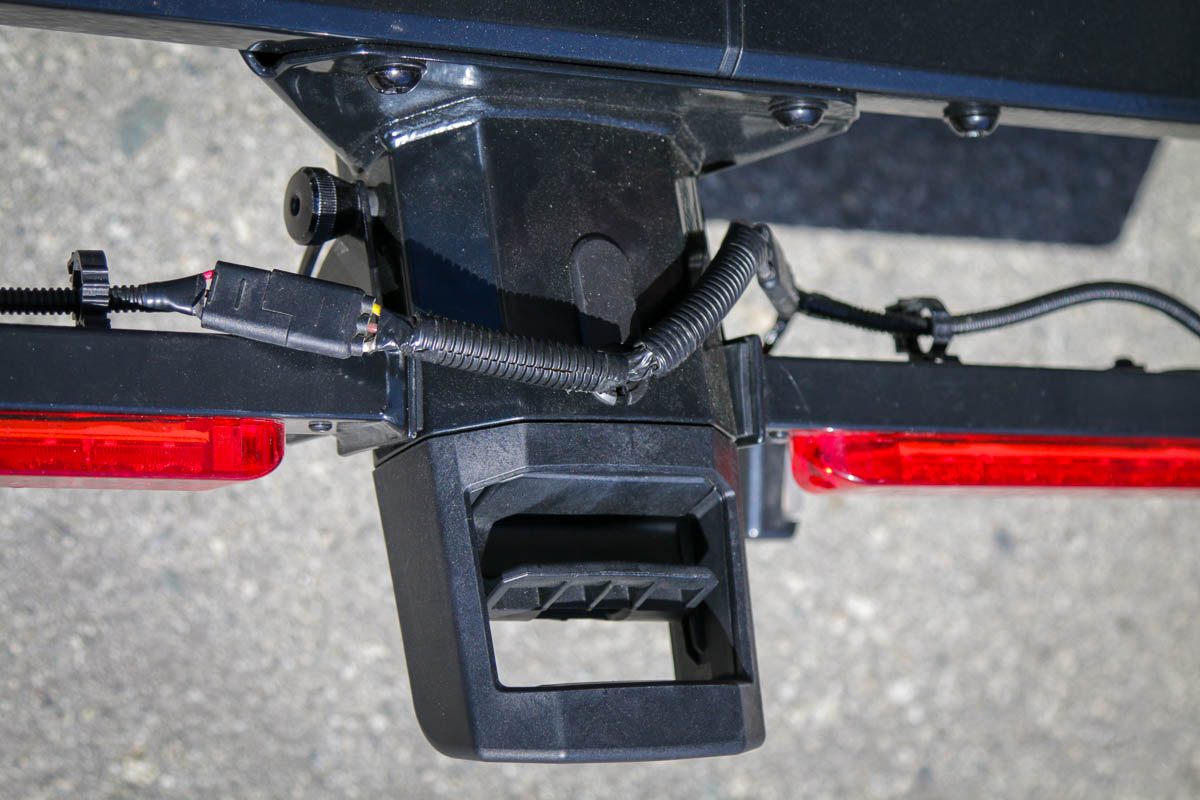 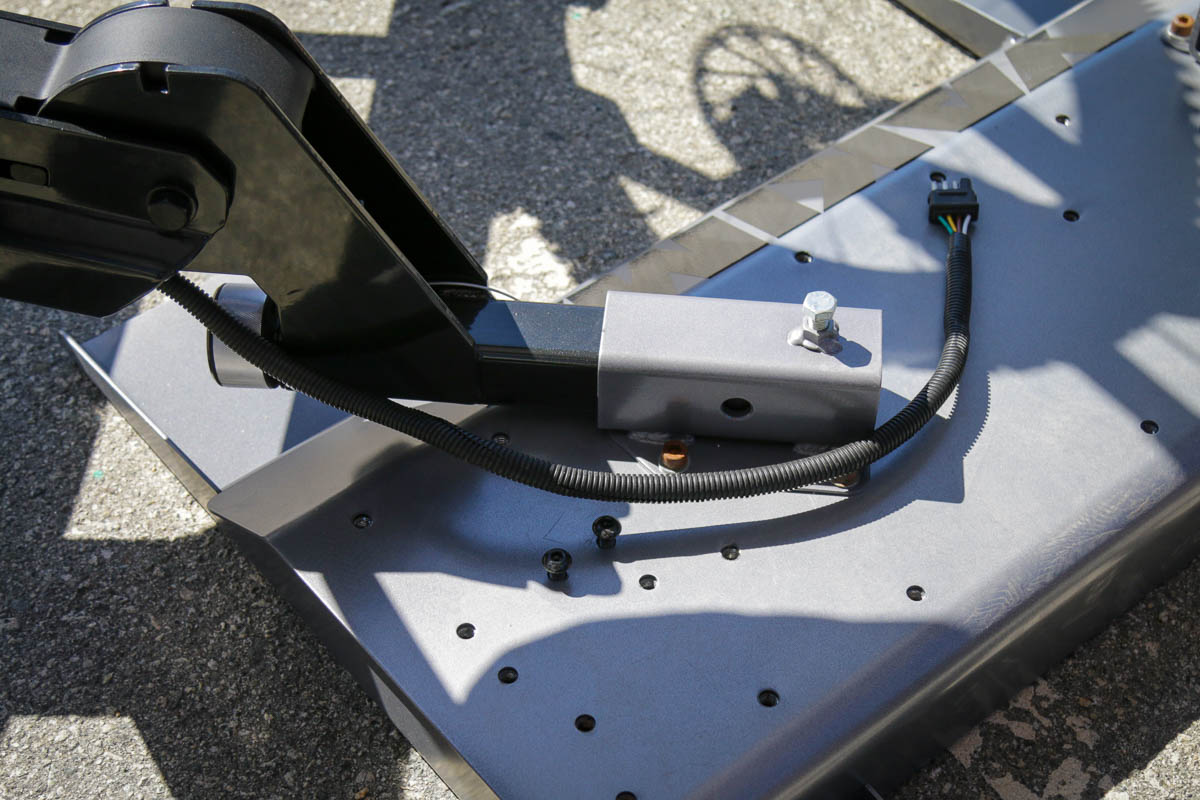 The SafetyMate uses a standard flat 4-way connector, and the wiring harness routes through the frame of the rack. 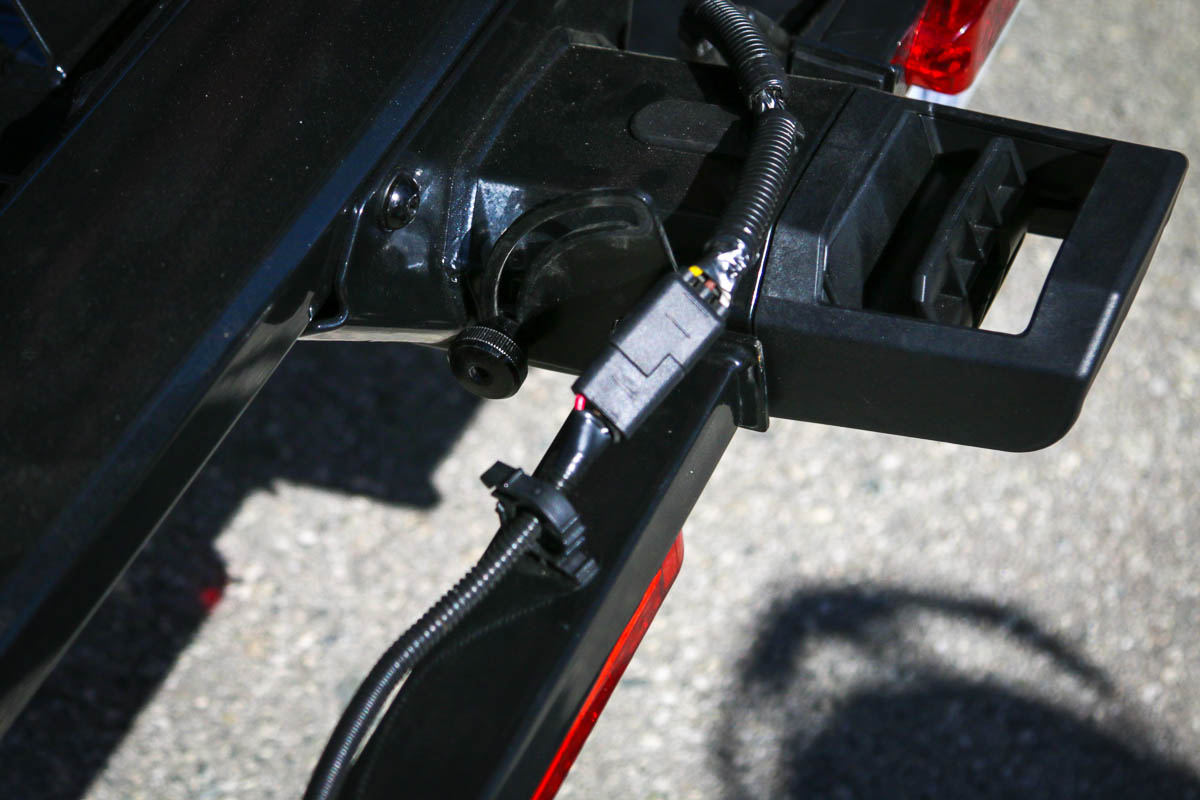 Due to the positioning of the lights, Yakima designed them to rotate 90° so that they’re still visible when the rack is folded up. 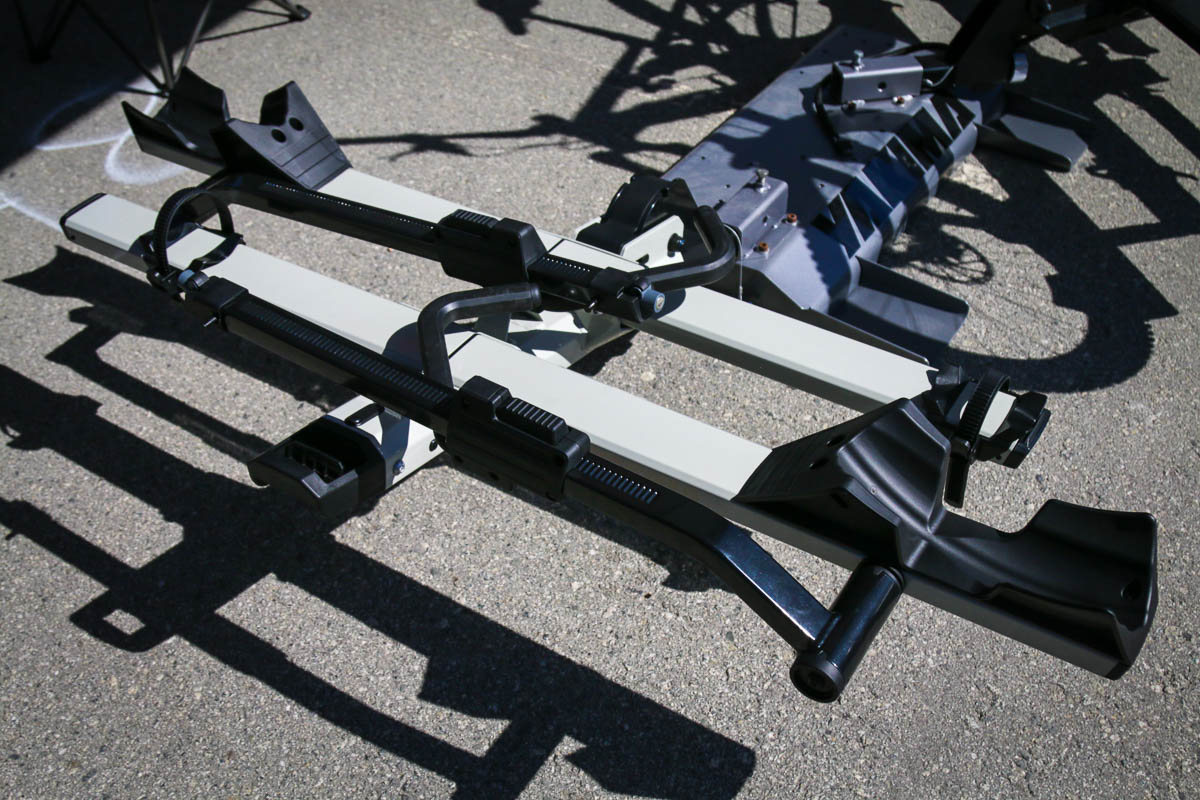 For those that don’t want the lights, the new StageTwo tray style rack will be sold without the SafetyMate package and starts at $749. The rack gets a premium Anthracite or Vapor Grey finish, and a few updates that position it at the top of the Yakima range. 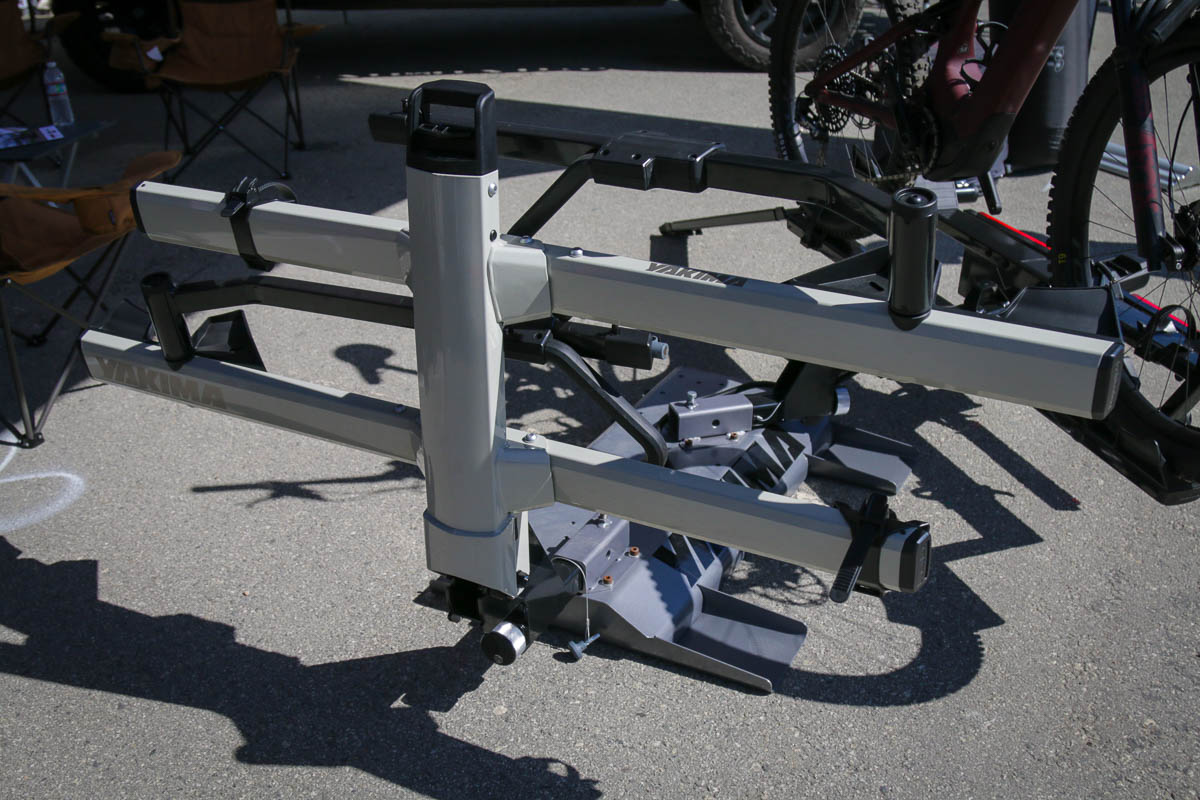 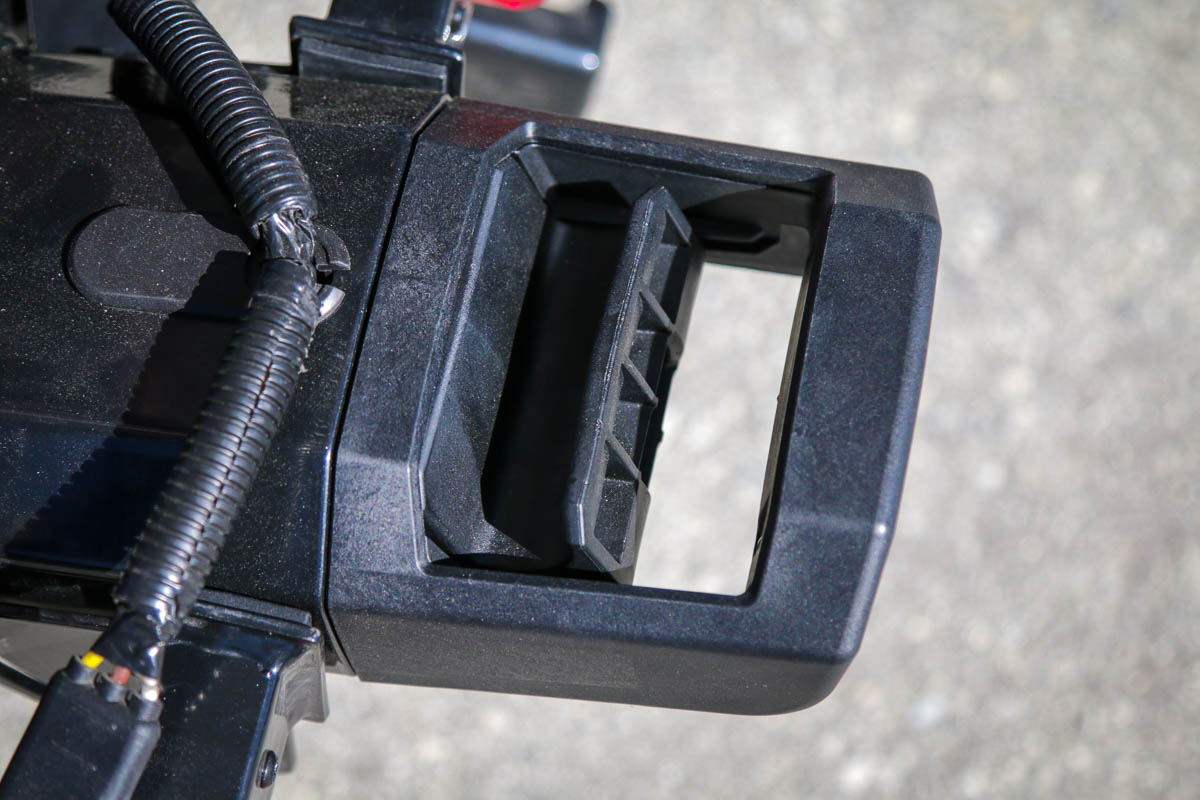 A new tilt lever offers access on either side of the handle for easy access in either position. 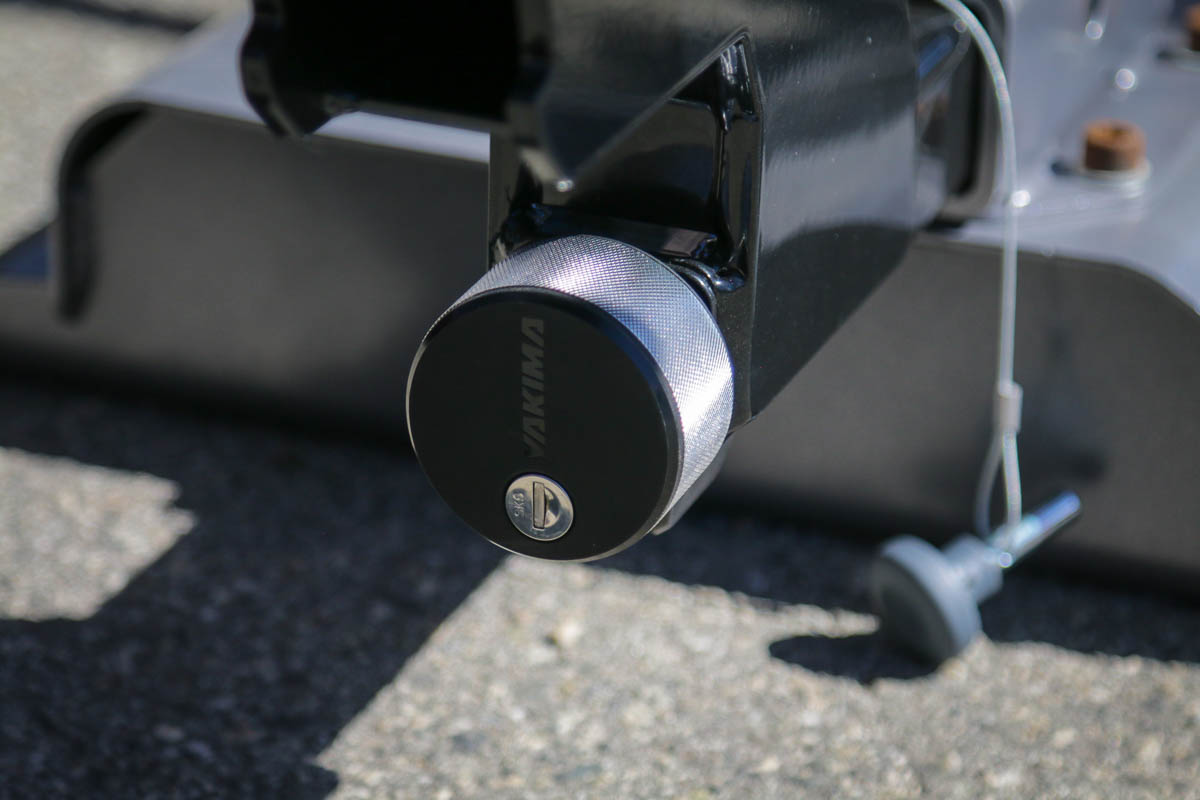 There’s also an updated speed knob that tightens the rack down in the hitch and locks it to the vehicle with their SKS (Single Key System). 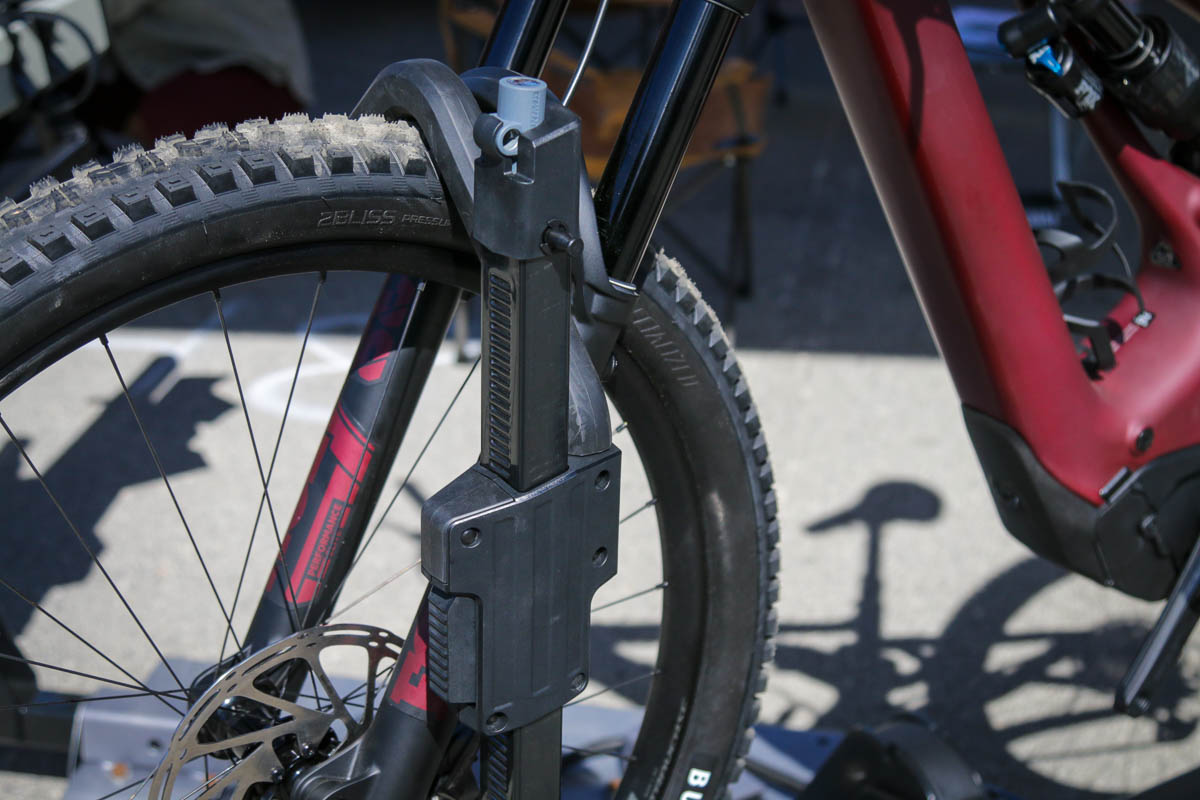 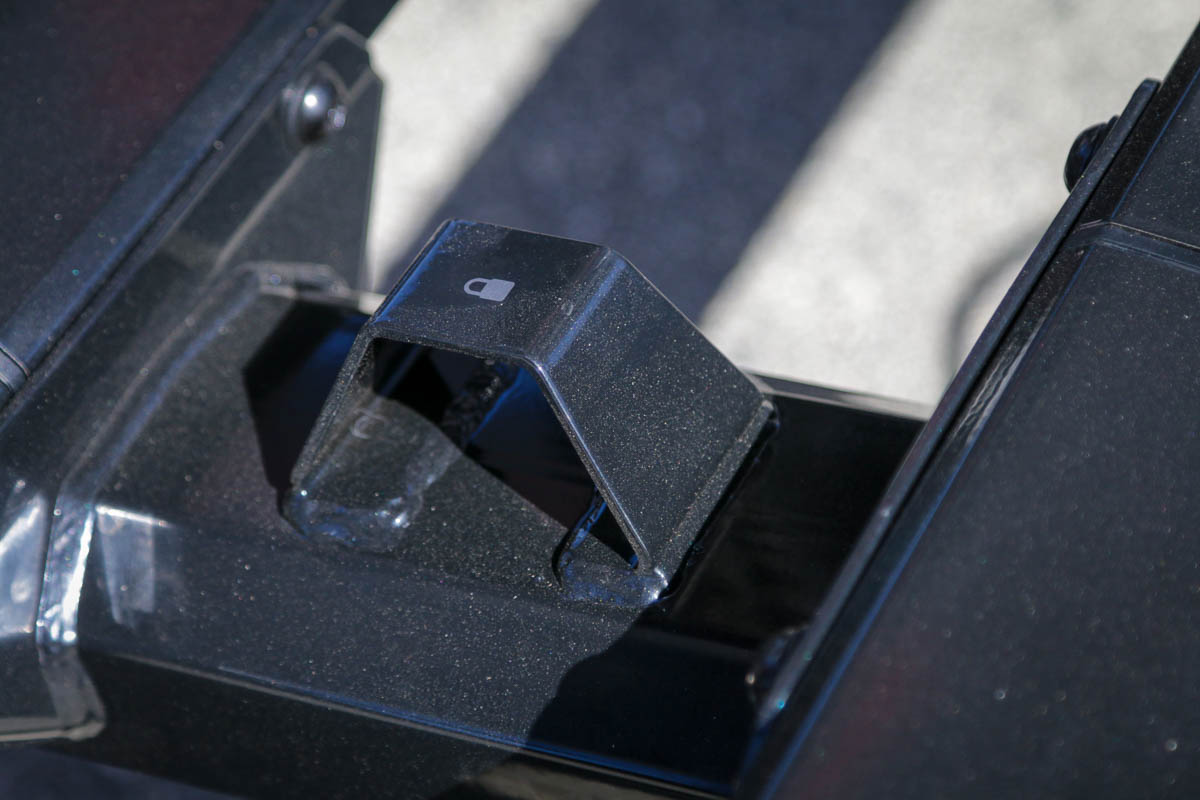 Locking is also available for each bike with SKS cable locks at each upright, and there’s an additional lock loop on the body of the rack to add a burly chain lock for secure storage when you need it. 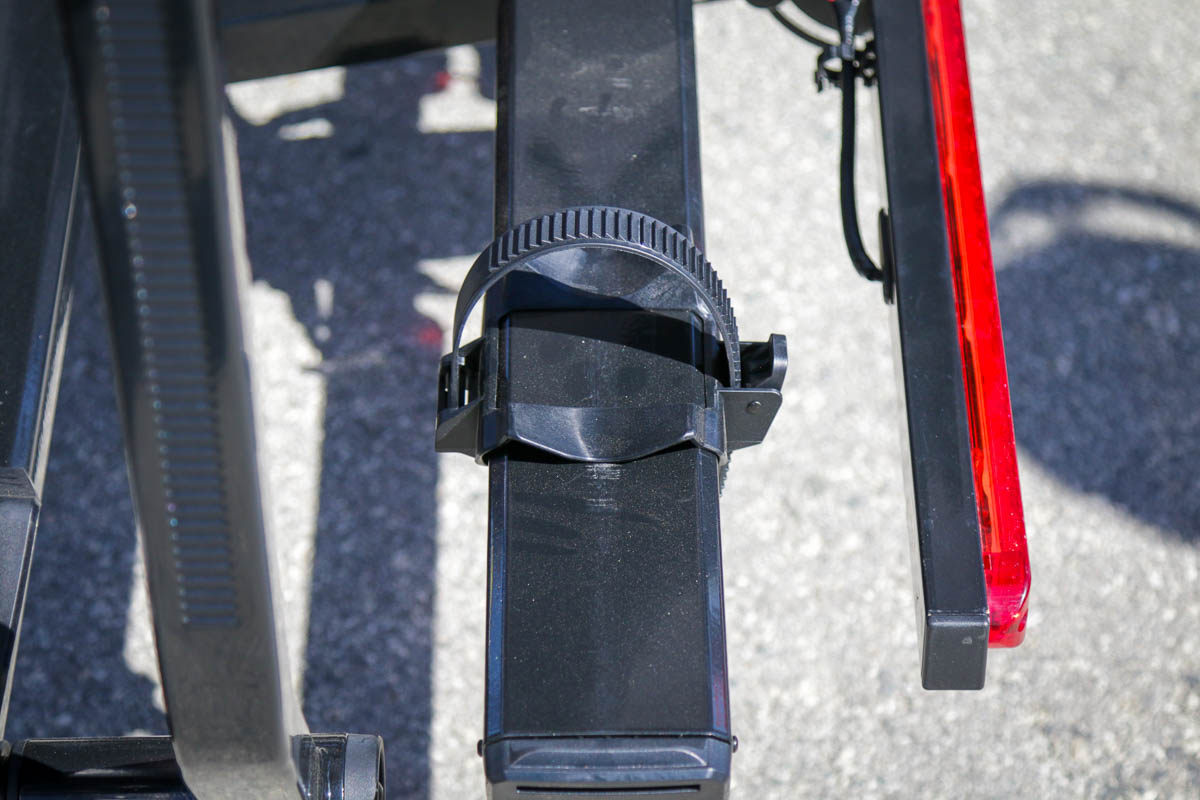 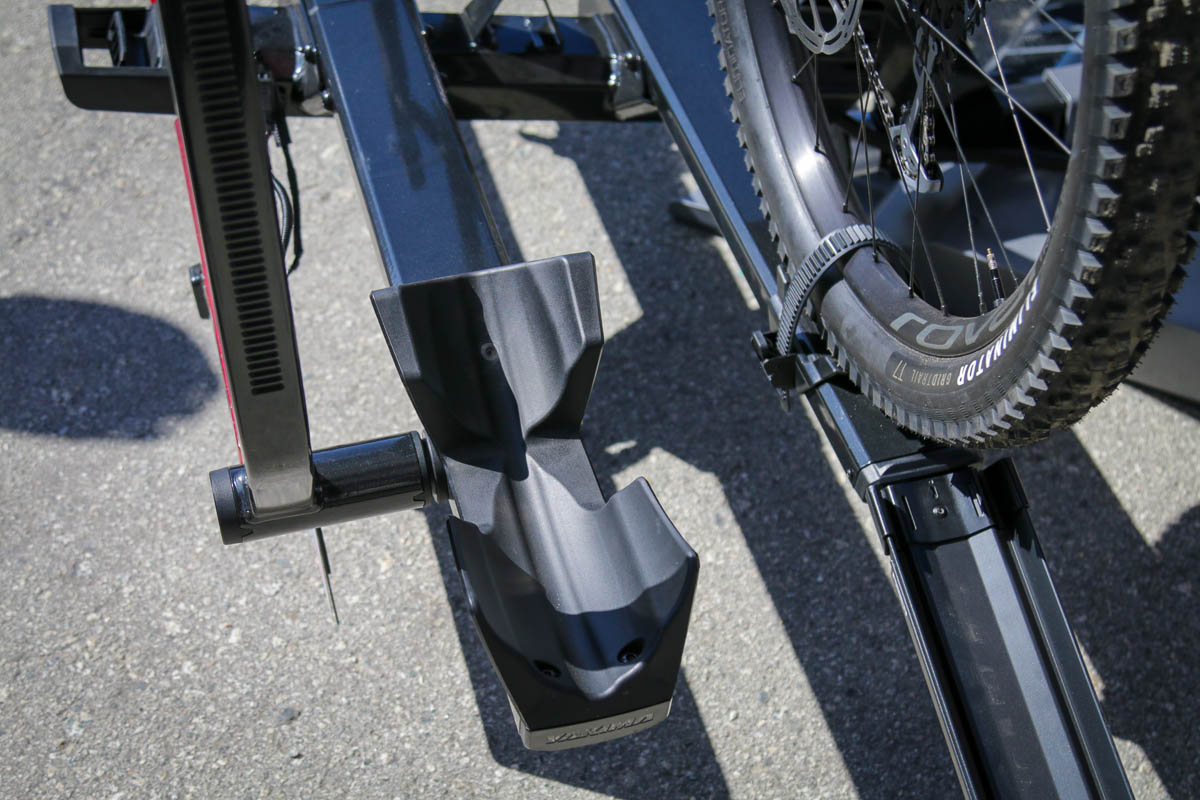 Each tray is positioned with ‘stadium tiering’ and staggered trays to make loading multiple bikes easier. The trays have a 52″ maximum wheelbase, and will fit up to 3.25″ tires before you’ll need the additional fat bike strap for bigger tires. In terms of the weight limit, Yakima has two levels: there is a 60lb maximum tray capability which is rated for RV use, or a 42lb tray rating for off-road use. A two bike add-on will be offered in each color for another $549. 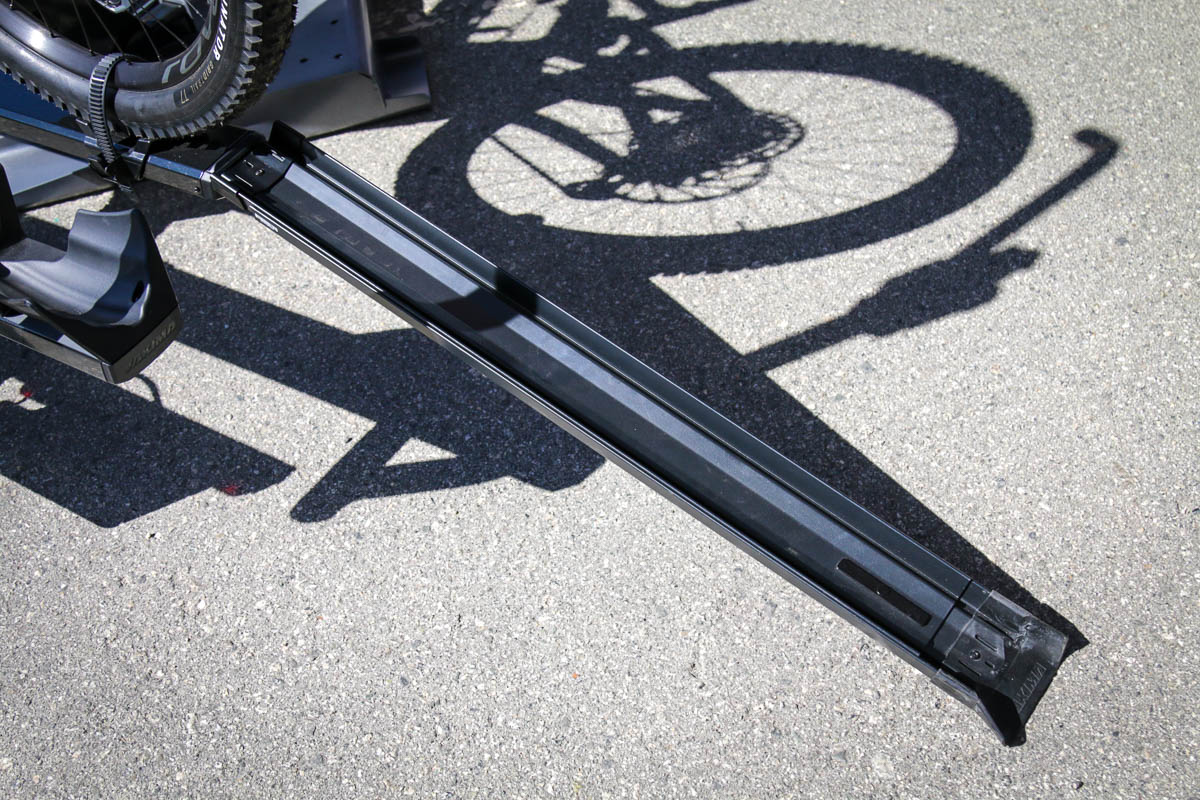 There will also be a Ramp Up accessory offered for $99. This ramp connects to the tray and allows you to push your bike up the ramp into the rack for easier loading. It does not store on the rack, so you’ll need to install and remove this every time you want to use it while storing it inside the vehicle between use. 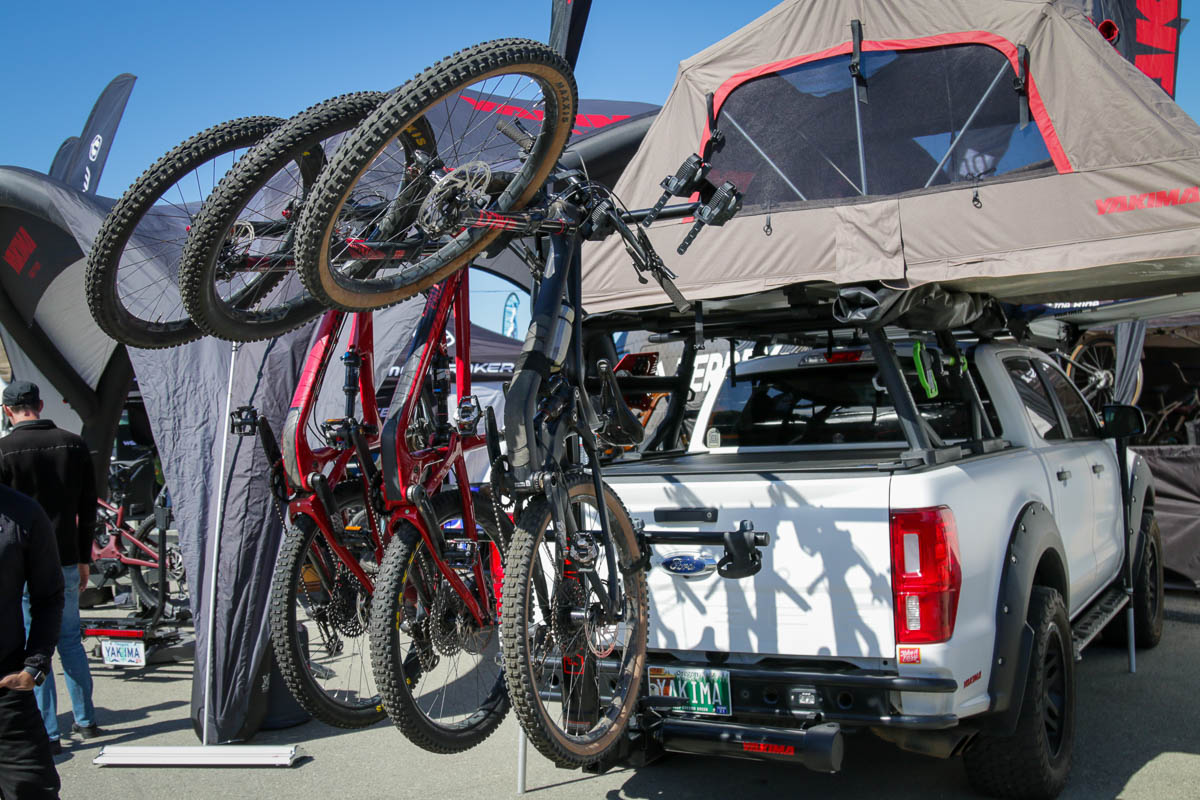 Want to carry more bikes and more types of bikes than the current HangOver? Then you might want to check out the new HangTight. Like the HangOver, the HangTight supports each bike vertically which allows up to 6 bikes to be carried on the back of your vehicle with a 2″ hitch. 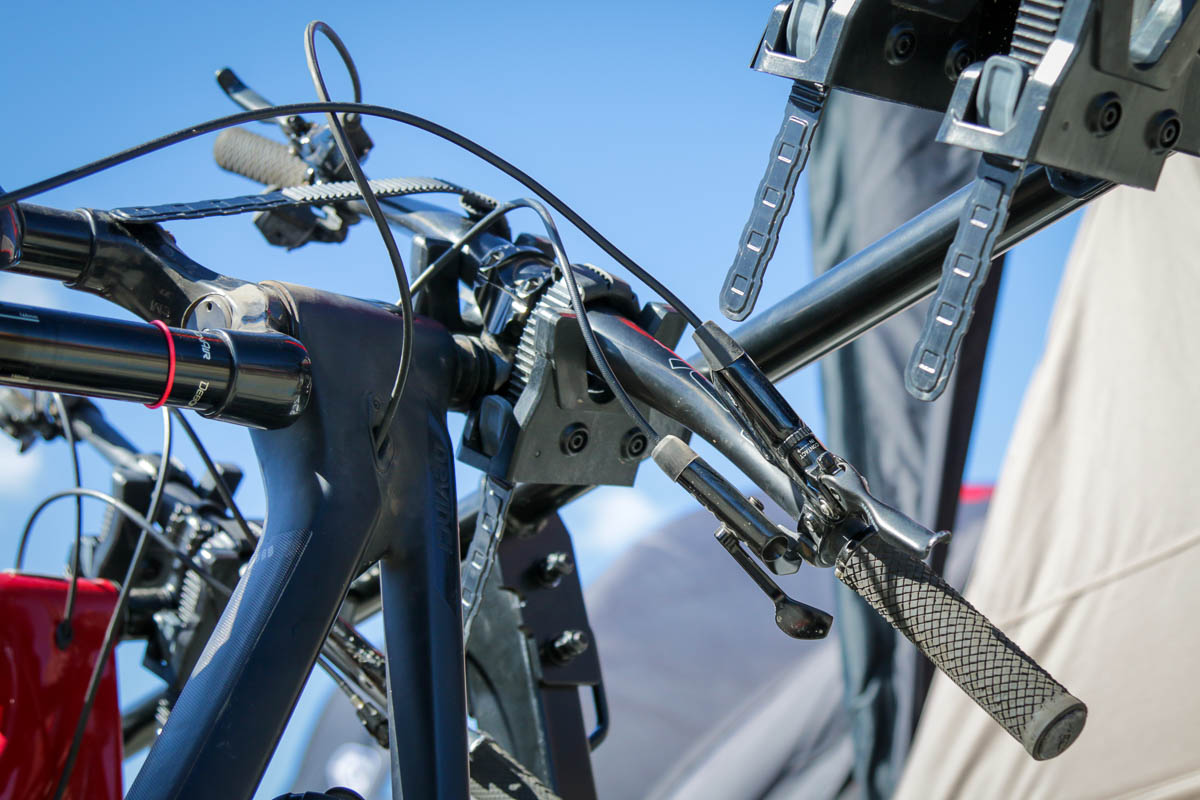 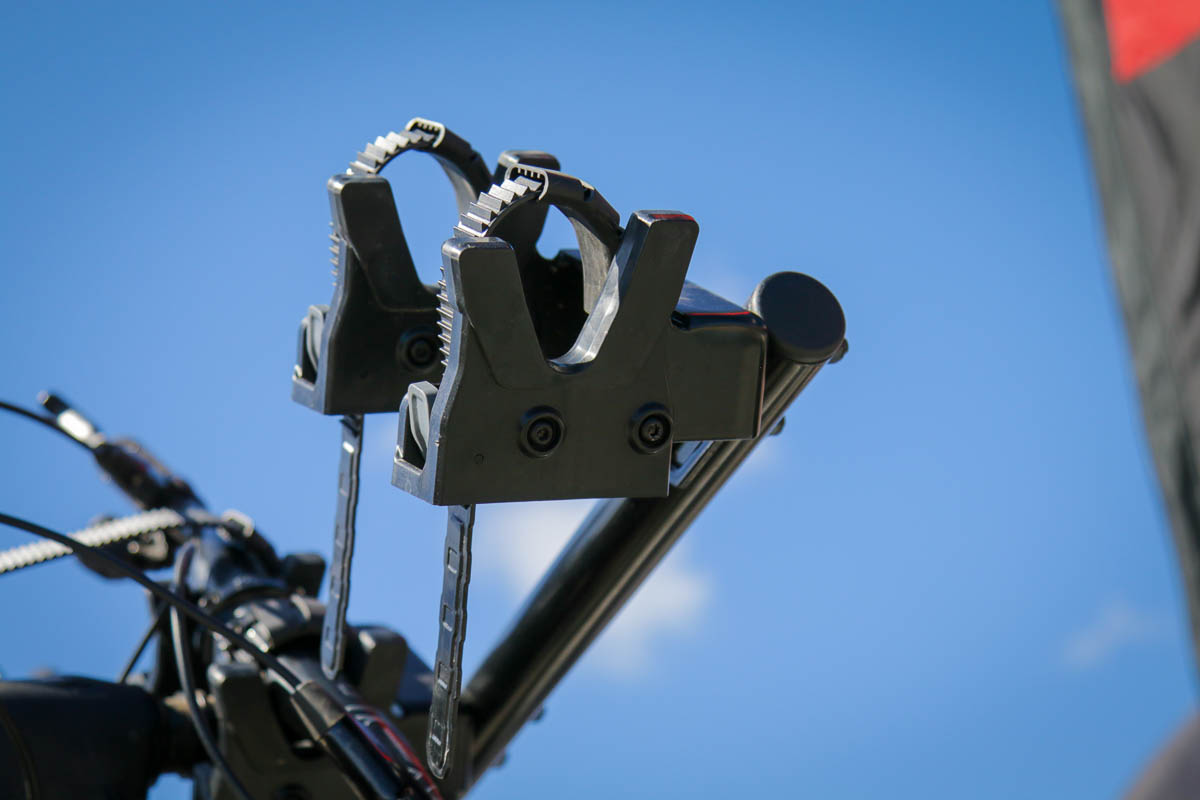 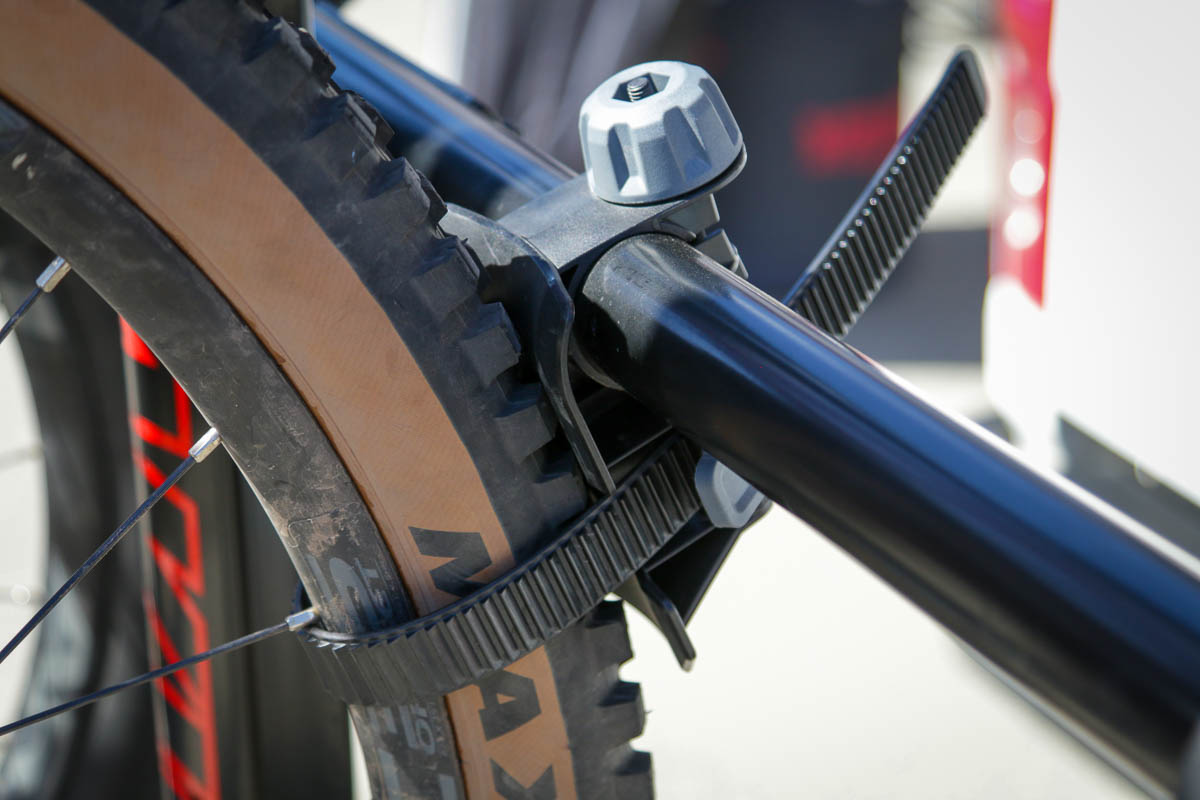 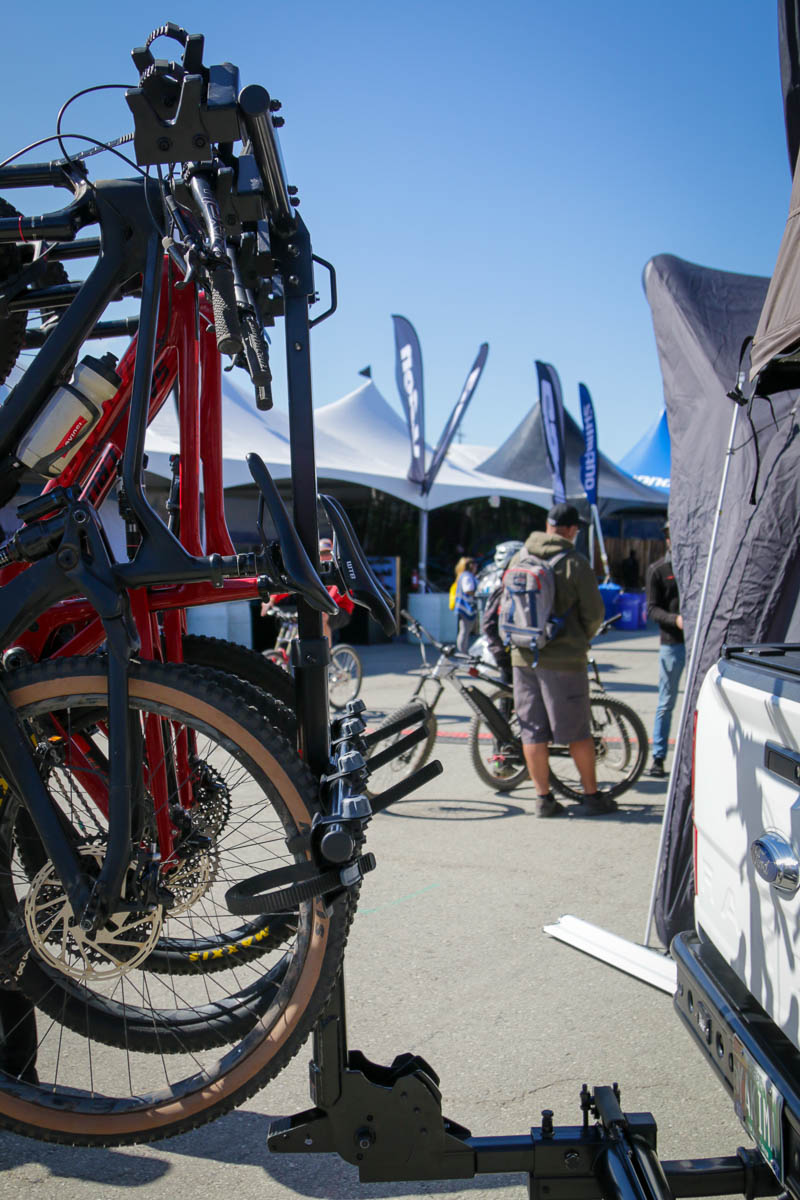 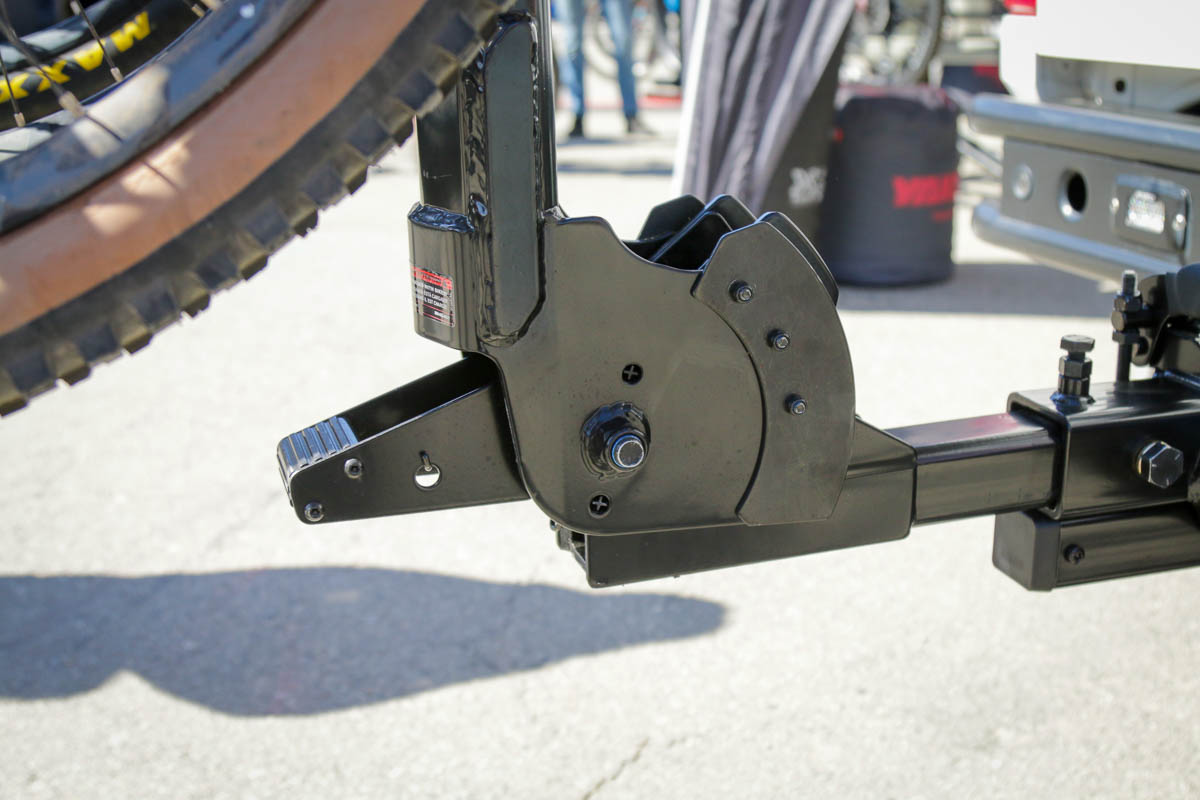 It will also work with more vehicles than the HangOver thanks to the flat profile of the bike arrangement. That means for flat back vehicles like Sprinter vans, it will work better, and still offer tilt-down access. 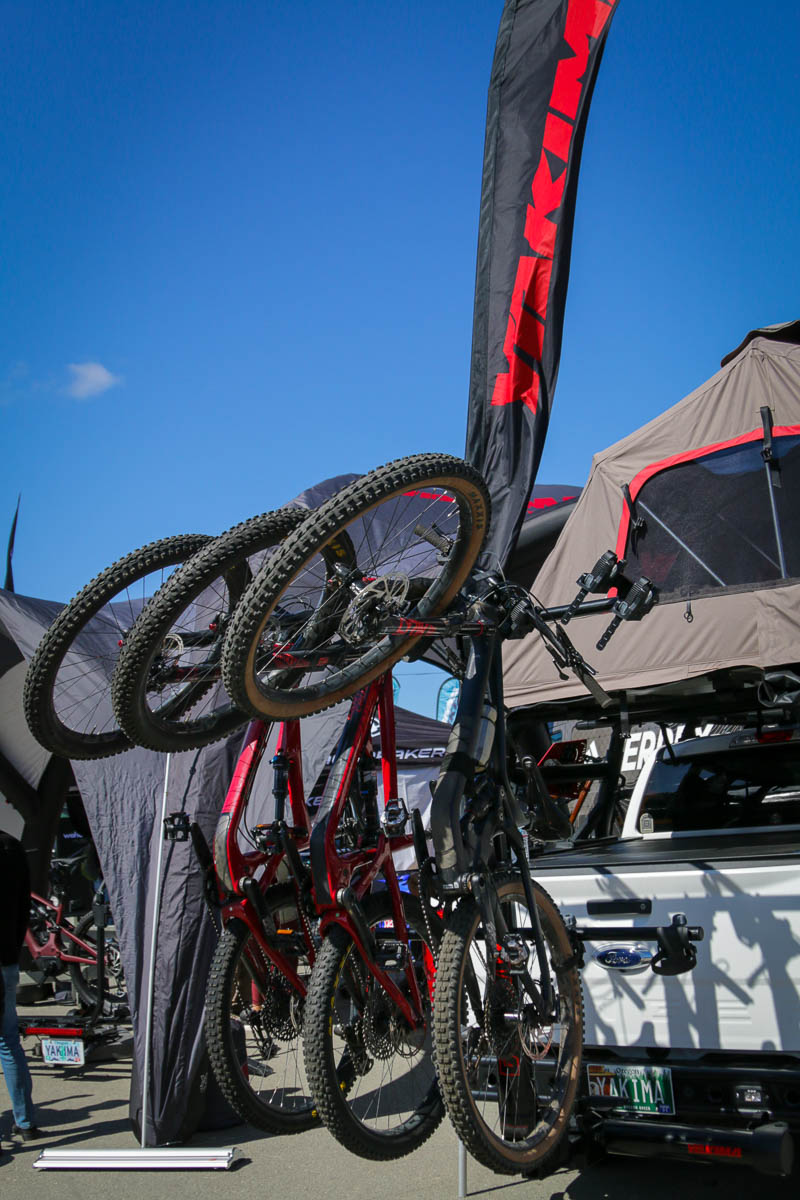 Yakima says that the HangTight will not replace the HangOver, but will be offered alongside for $799 for the 4 bike or $999 for the 6 bike version. Expect these to be available before the end of the year. 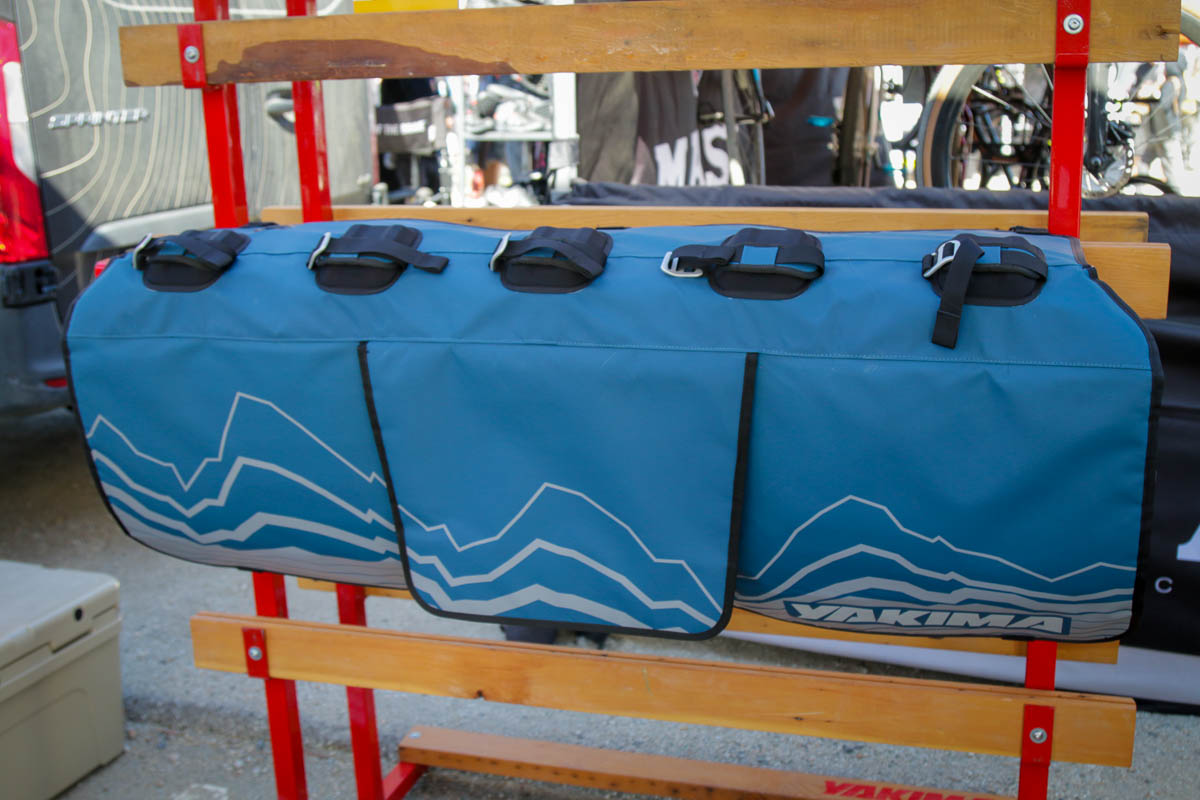 In the back of their booth, Yakima was also giving a sneak peek at the updated GateKeeper truck tailgate pad. 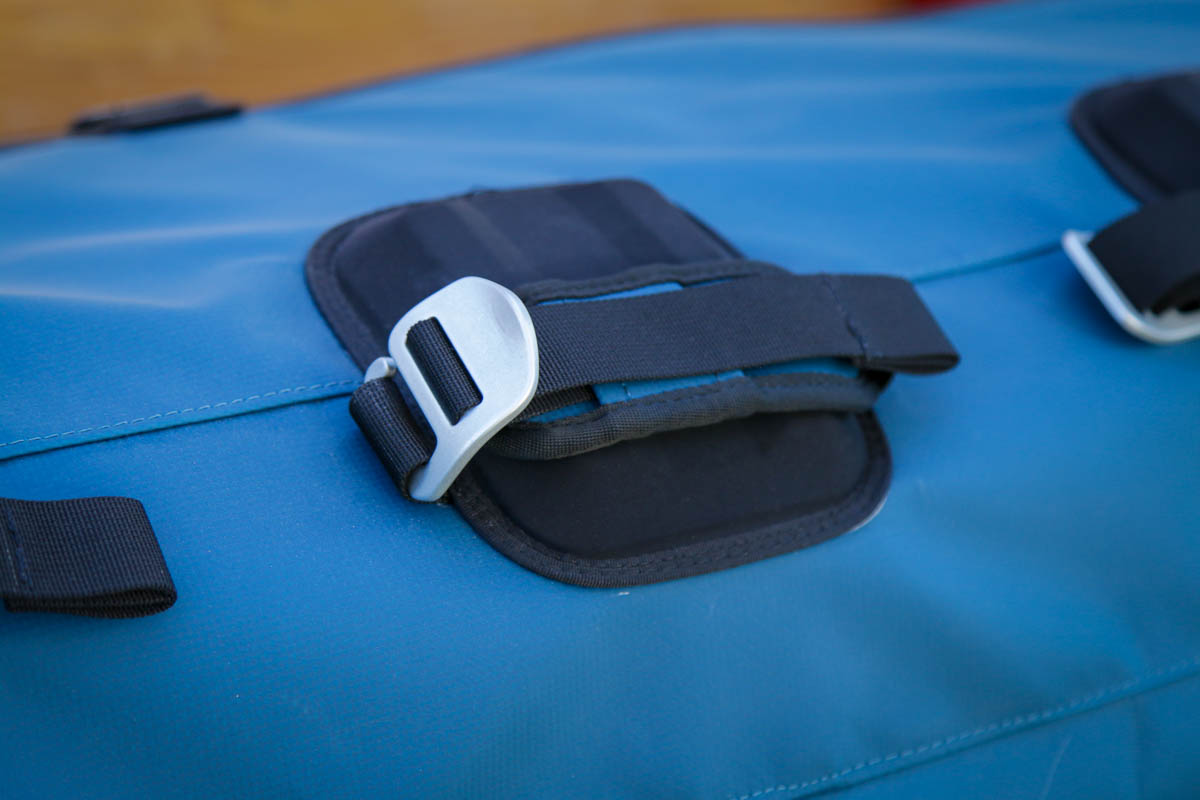 It will still hold up to five bikes, but one of the biggest updates is the move from velcro straps to buckles for the frame holds. 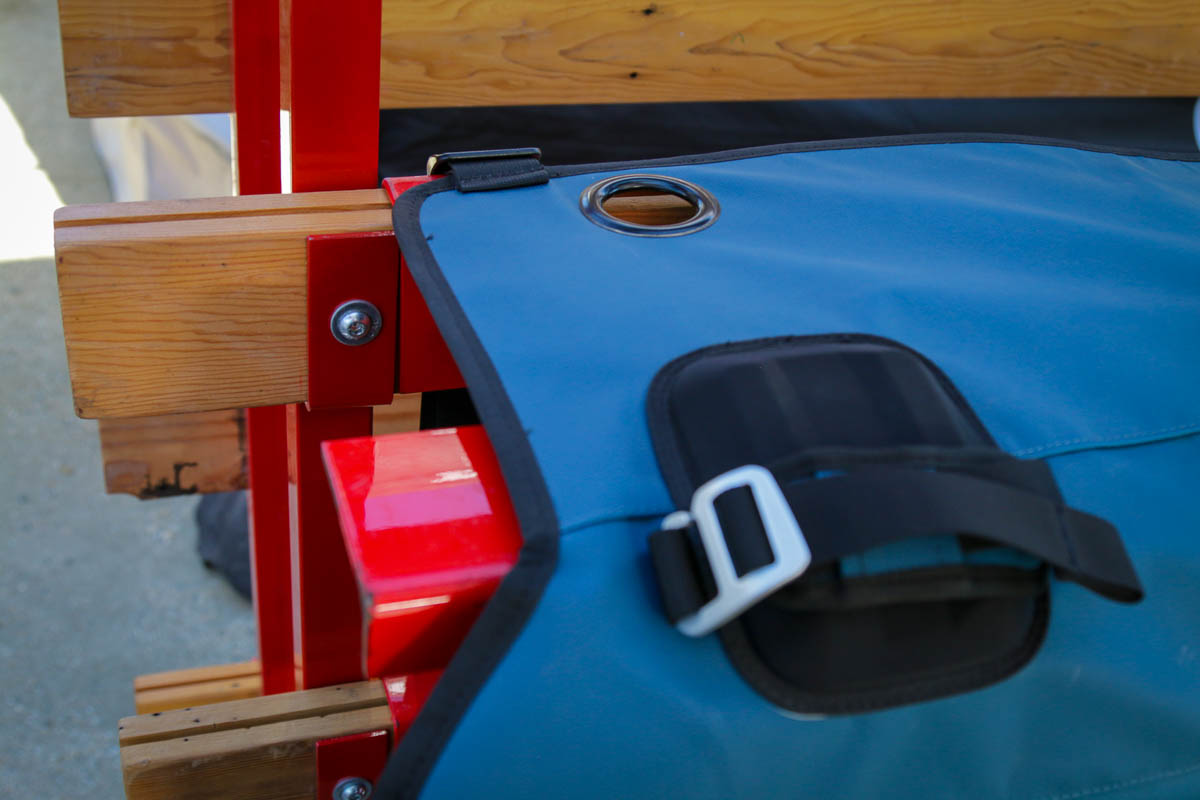 The shape has also been updated, specifically to fit the new Jeep Gladiator pickups, and a lock loop has been added for additional security.