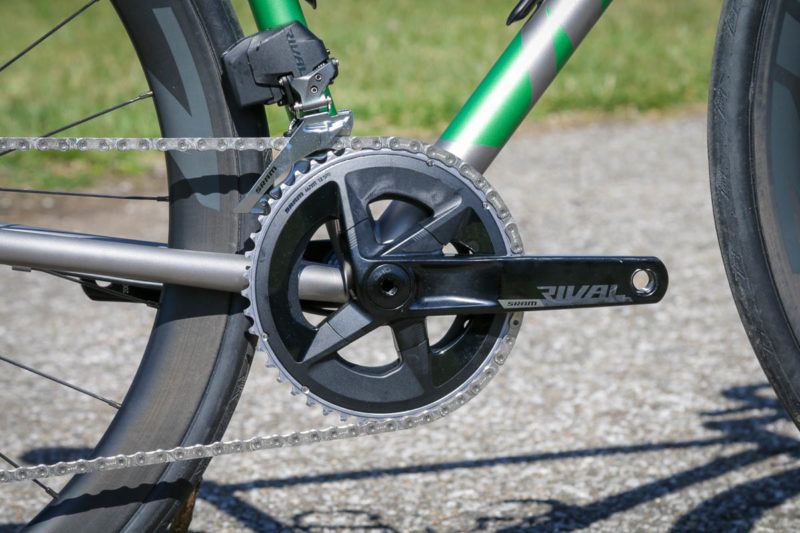 SRAM Rival eTap AXS is here. Surprise? It didn’t take a crystal ball to figure out what might be next in the eTap AXS pipeline, but it seems like SRAM’s newest road group will be worth the wait.

But why add wireless shifting to what’s essentially SRAM’s entry point for performance road and gravel groups? SRAM says that it’s all about bringing the latest innovations to riders of all levels while reducing complexity and removing barriers – essentially they just want to make a better ride for all. 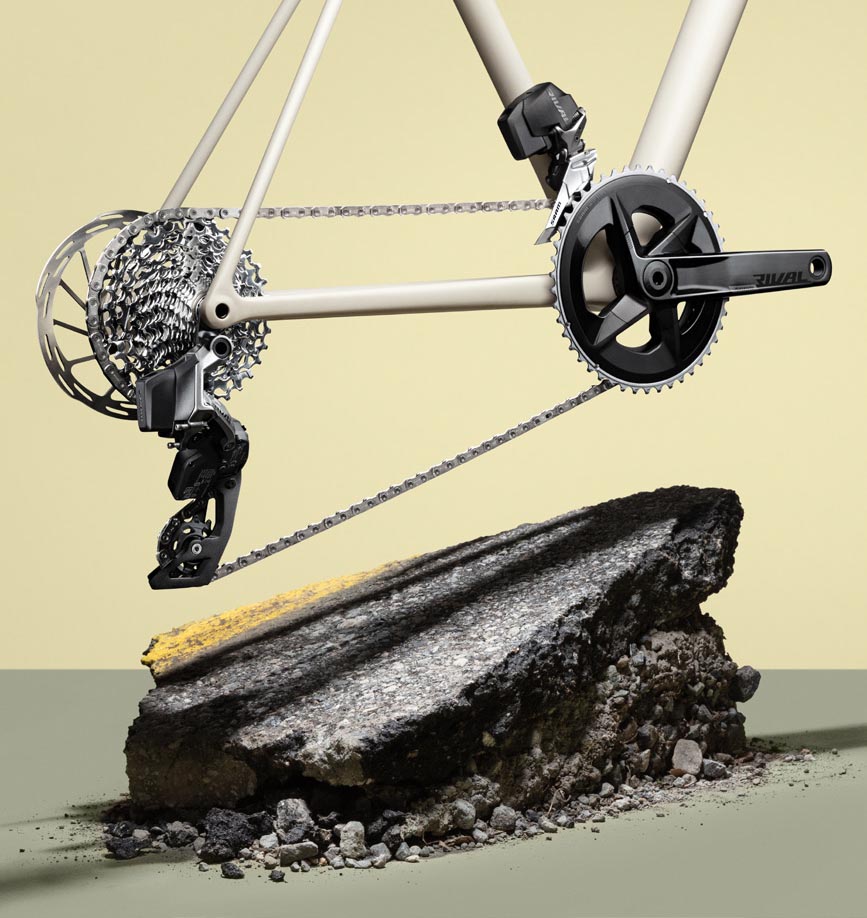 Being ‘AXS enabled’ gives riders the ability to display Gear indication on their GPS head units while also recording the time in gear that goes into the FIT file from each ride. From there, you can use AXS web to see individual gear metrics. 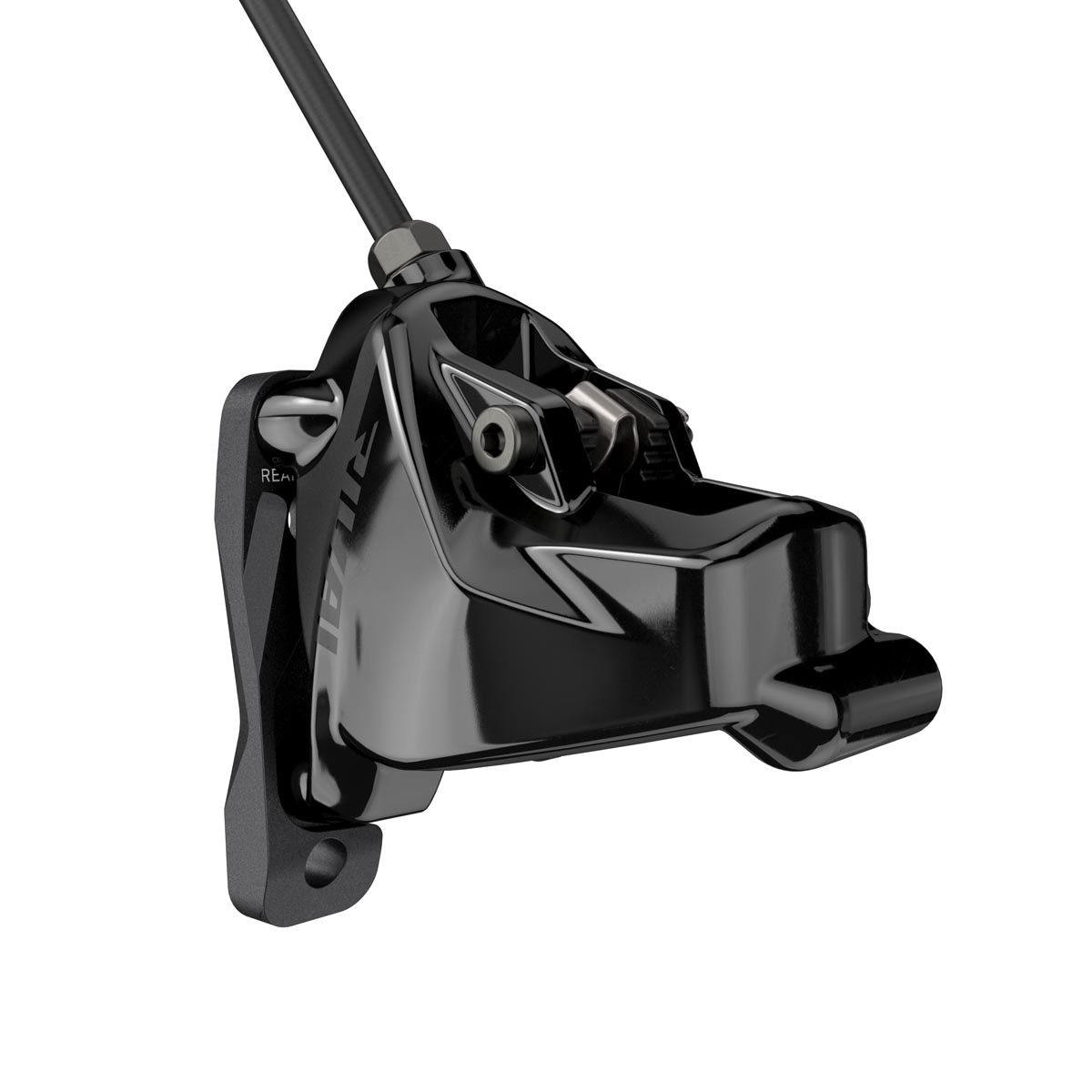 Notably, Rival will now be wireless and hydraulic disc brake only. That’s right, no more mechanical Rival 2x groups, and no more rim brakes. However, SRAM will still offer RED and Force eTap AXS with a mechanical rim brake option – you just won’t find it at the Rival level. 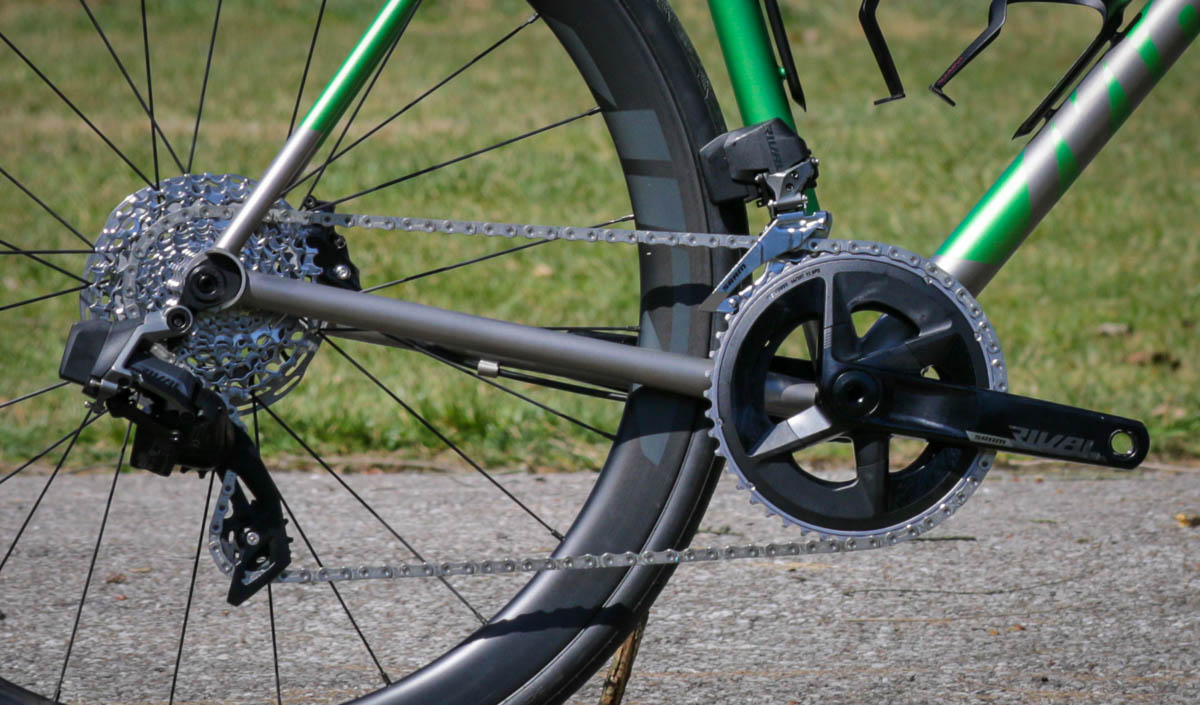 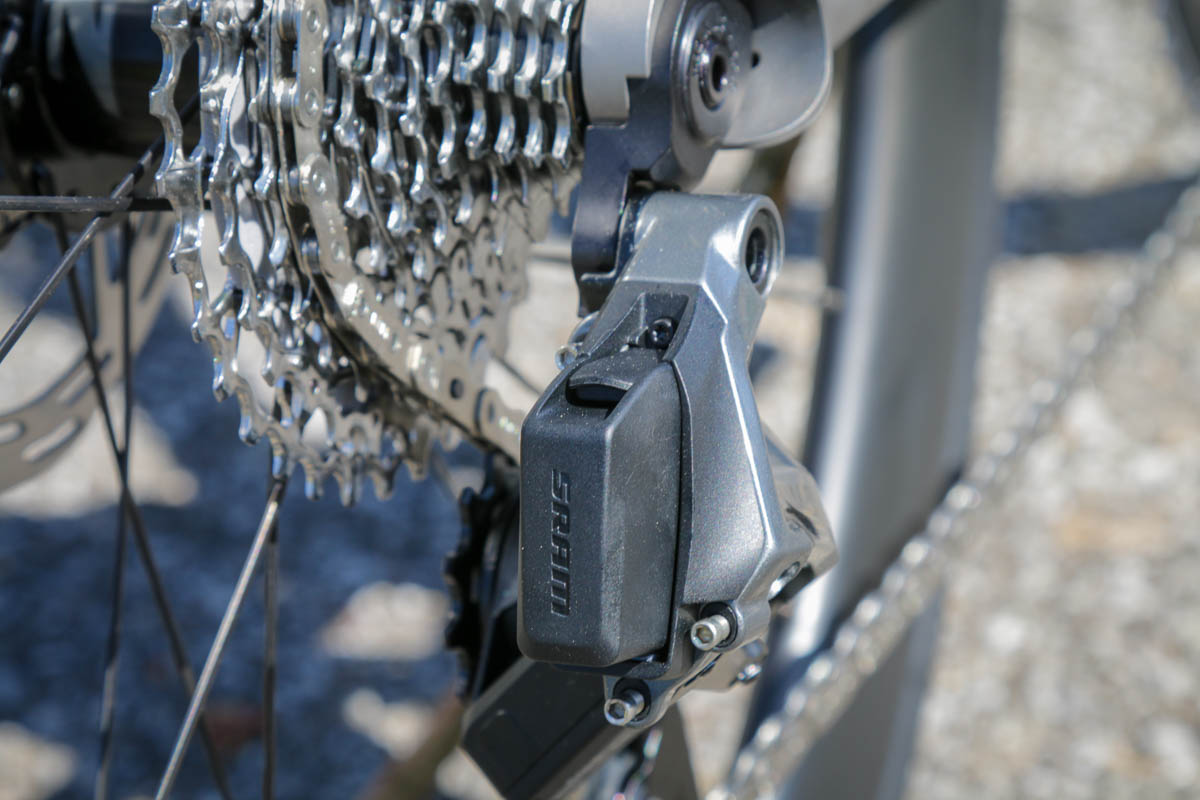 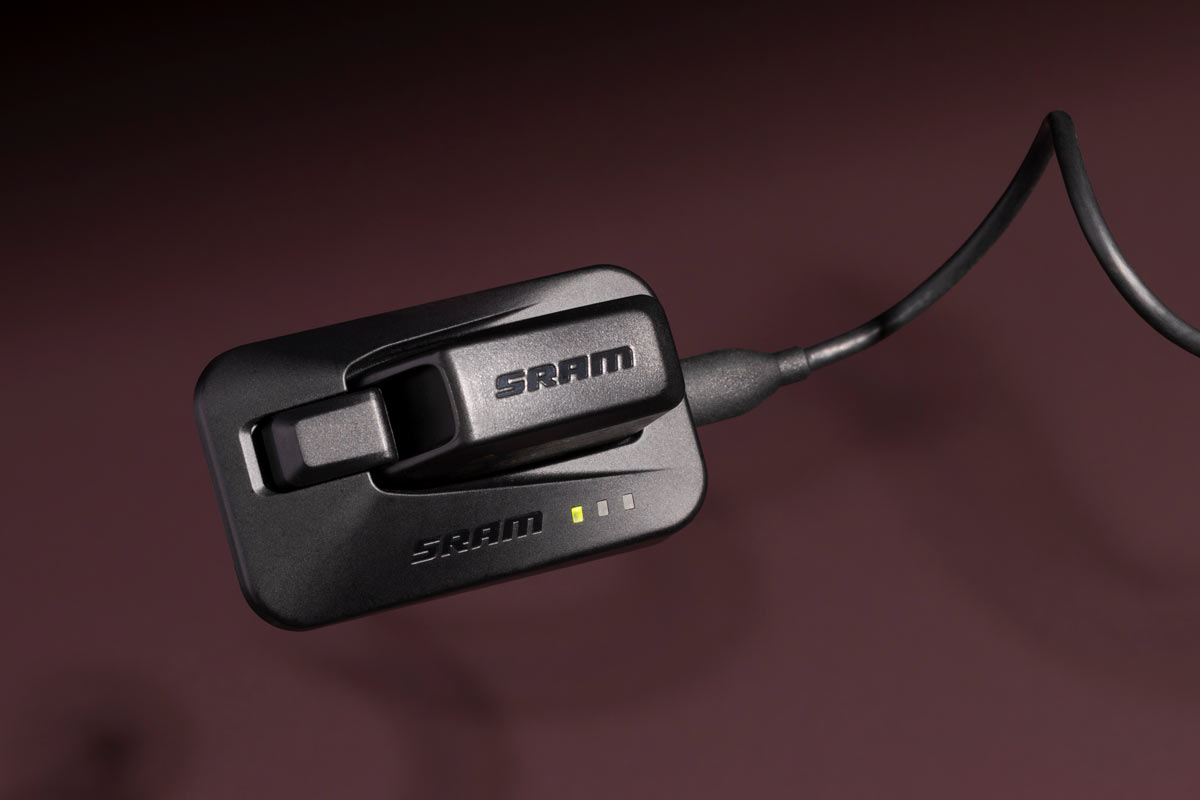 The rechargeable battery packs disconnect from the front and rear derailleur, and are charged in their own USB dock. Complete bikes and groups will include a single charger, but if you want to charge multiple batteries at once, you can pick up an additional charger for $40. And if you manage to lose a battery, or want a spare, those are $55 each. 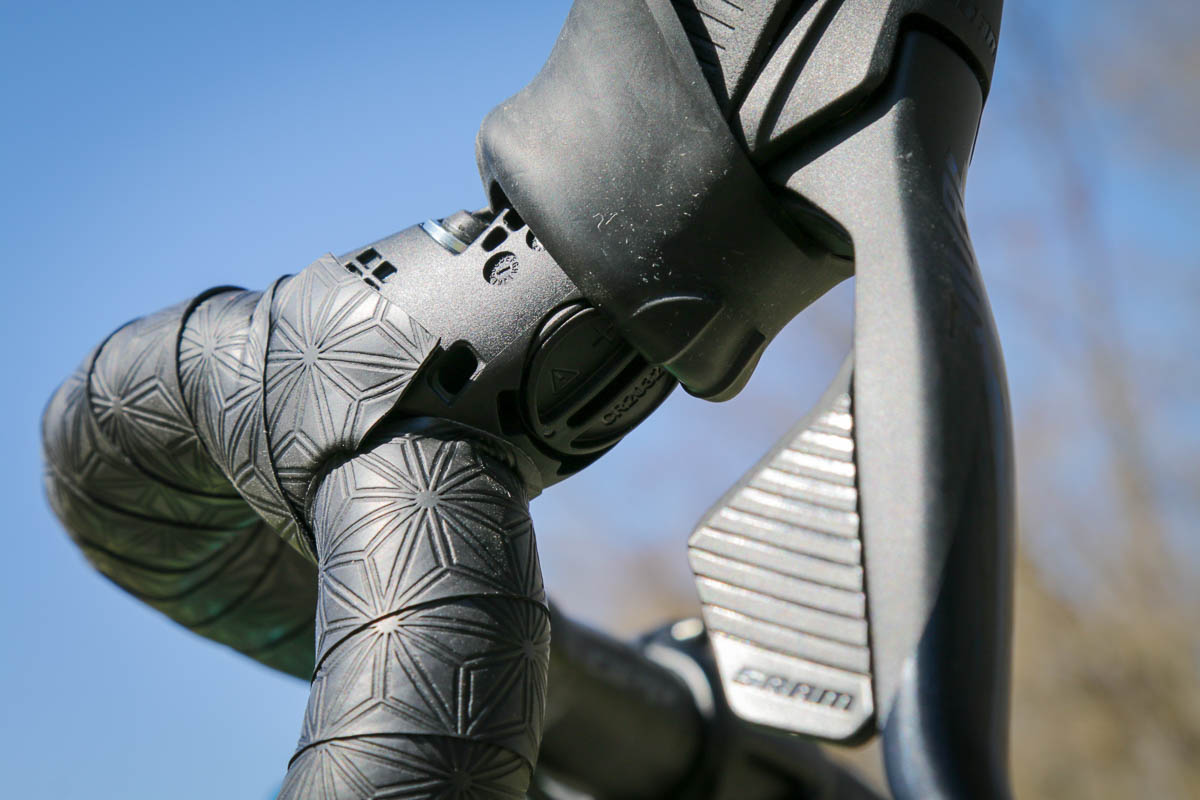 Since the battery packs would be too big to fit in the shifter and they don’t need as much juice, each hood includes a CR2032 coin cell battery stored in a compartment under the lever. Battery life on these will depend on how often you shift, and ride, but on my Force eTap AXS test group, I’m going on two years now with the first batteries. 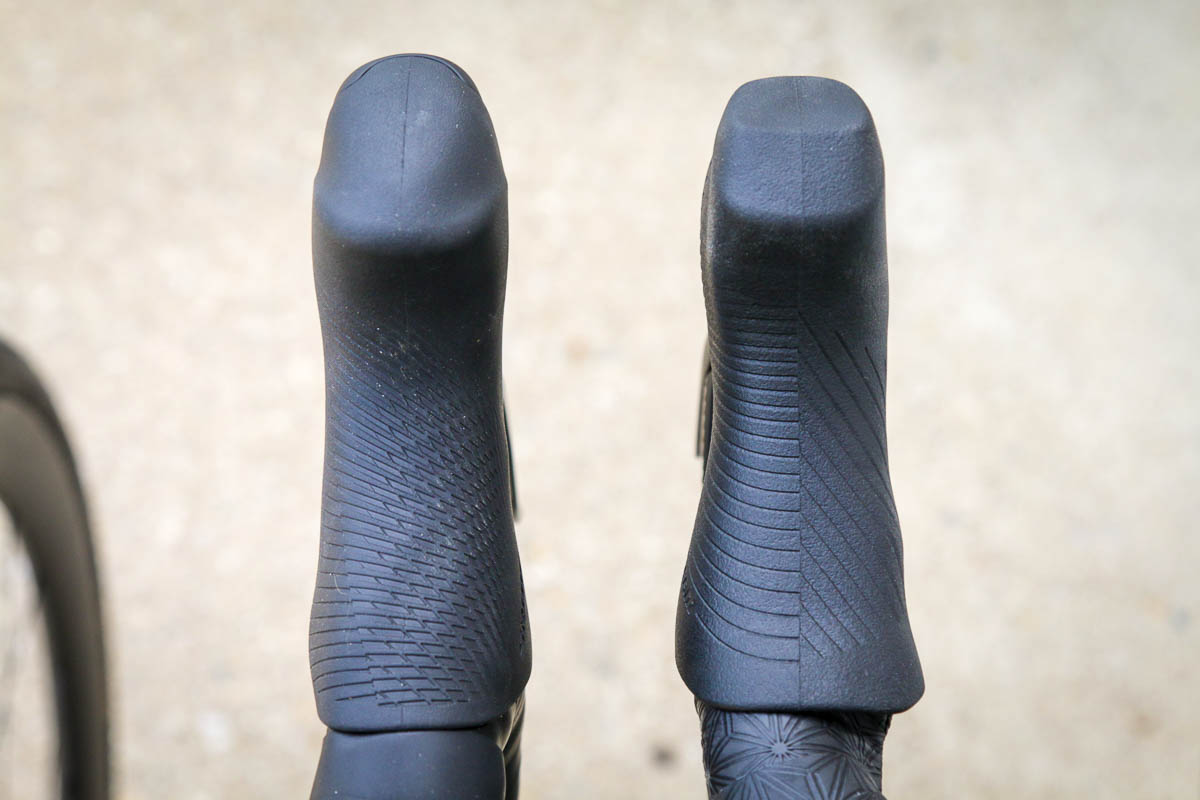 While we’re on the topic of shifters, the shape of new Rival eTap AXS hood is one of the most noticeable changes for the entire group. Compared to the hoods of RED and Force, the Rival hoods are a bit shorter, and about 10mm smaller in diameter at the narrowest point. The result is a hood with increased finger wrap and improved reach to the lever for those with small hands. 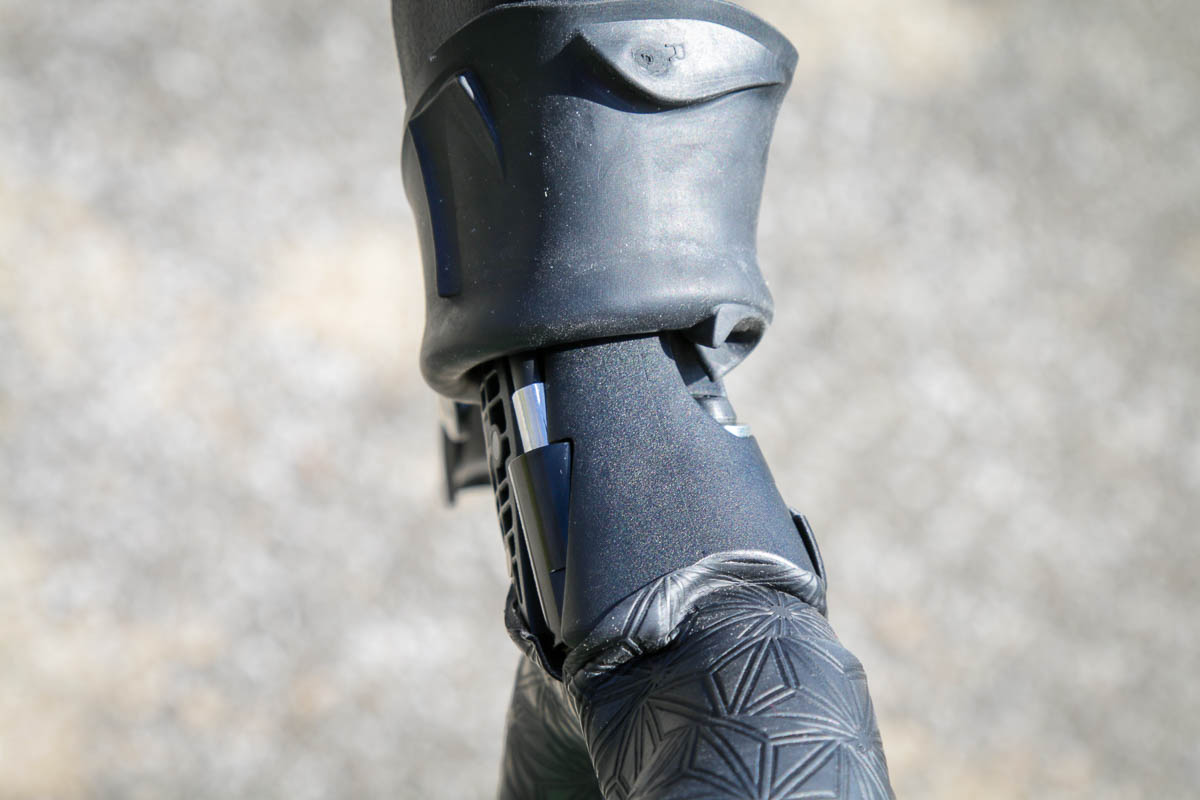 Part of making the hoods smaller is the removal of the port for Blip or Clics. If you want those, you’ll have to use Force or RED shifters. The shifters also lose the pad contact point adjustment of RED and Force, but keep the lever reach adjustment. The levers themselves make the move from carbon to more affordable aluminum for Rival. 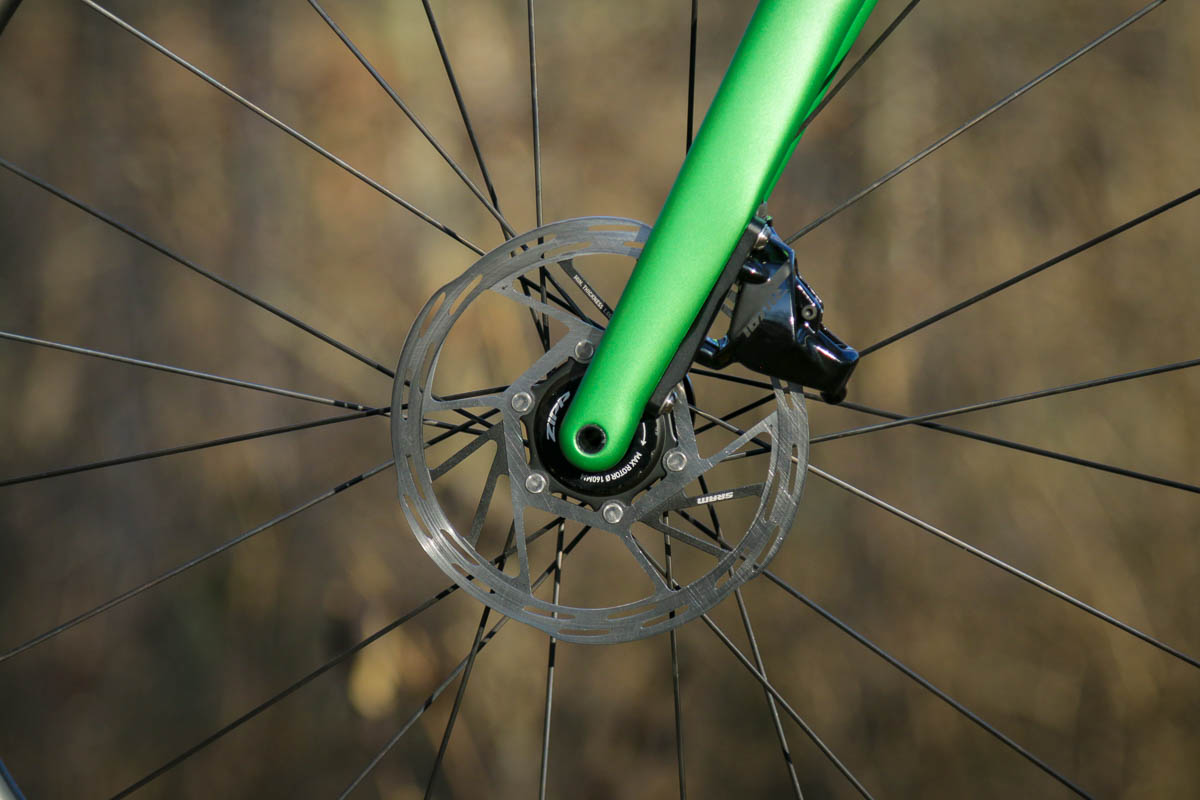 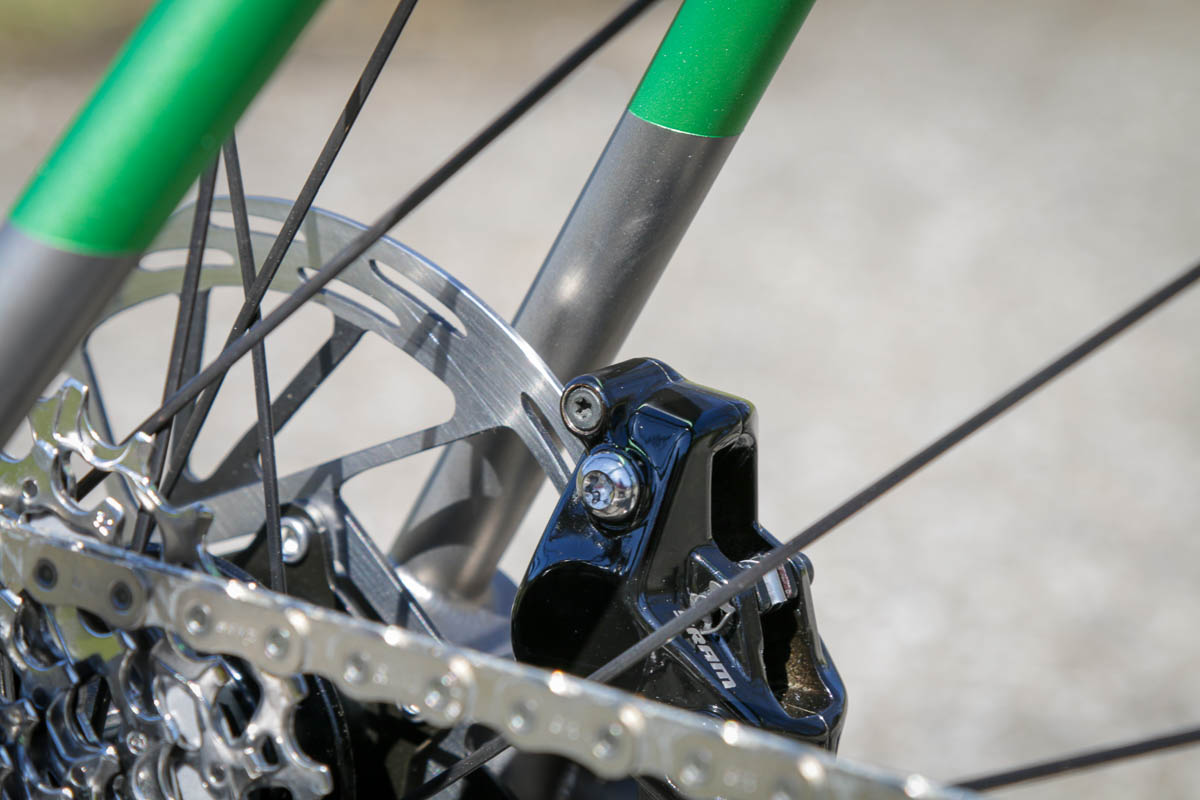 Rival’s braking design is identical to Force and RED at the lever, but RED and Force calipers include SRAM’s Bleeding Edge snap fit bleeding port. Rival keeps the cost down with a traditional threaded port, but still uses Bleeding Edge bleed process. 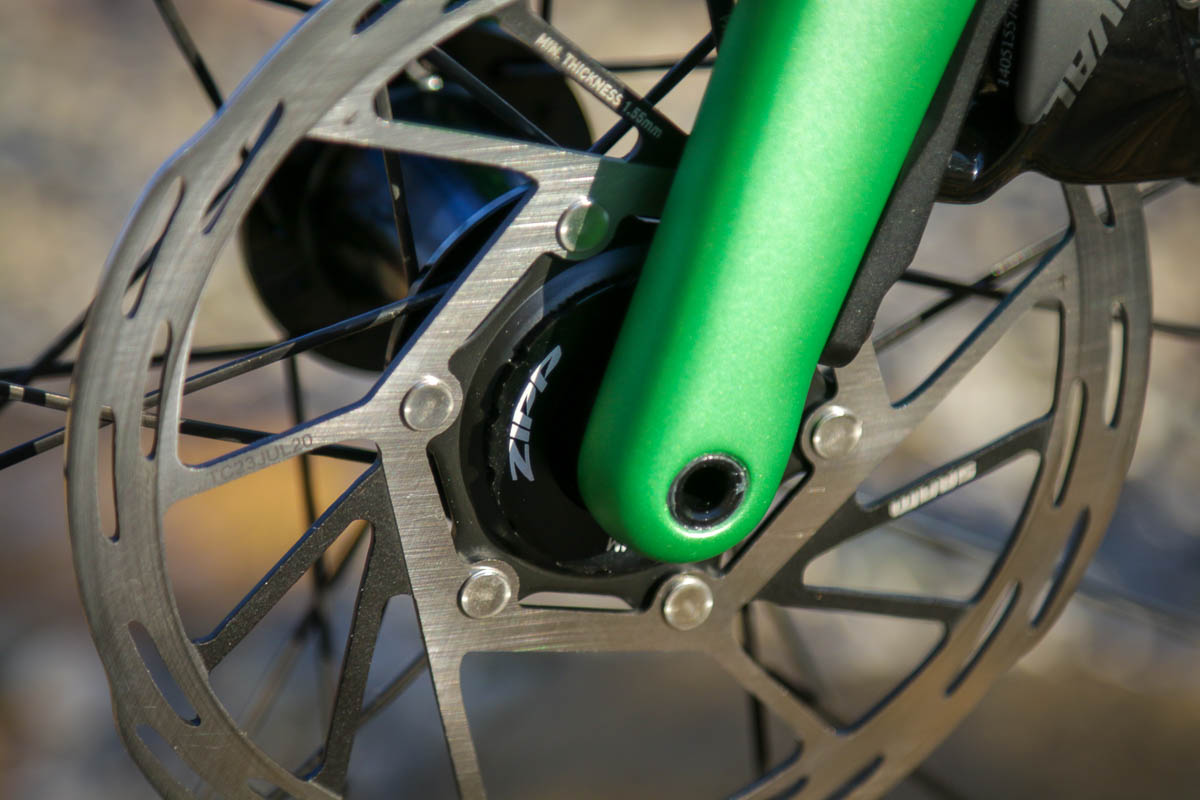 There are no Rival-specific brake rotors, so our test bike came equipped with the Paceline Centerlock rotors from SRAM. 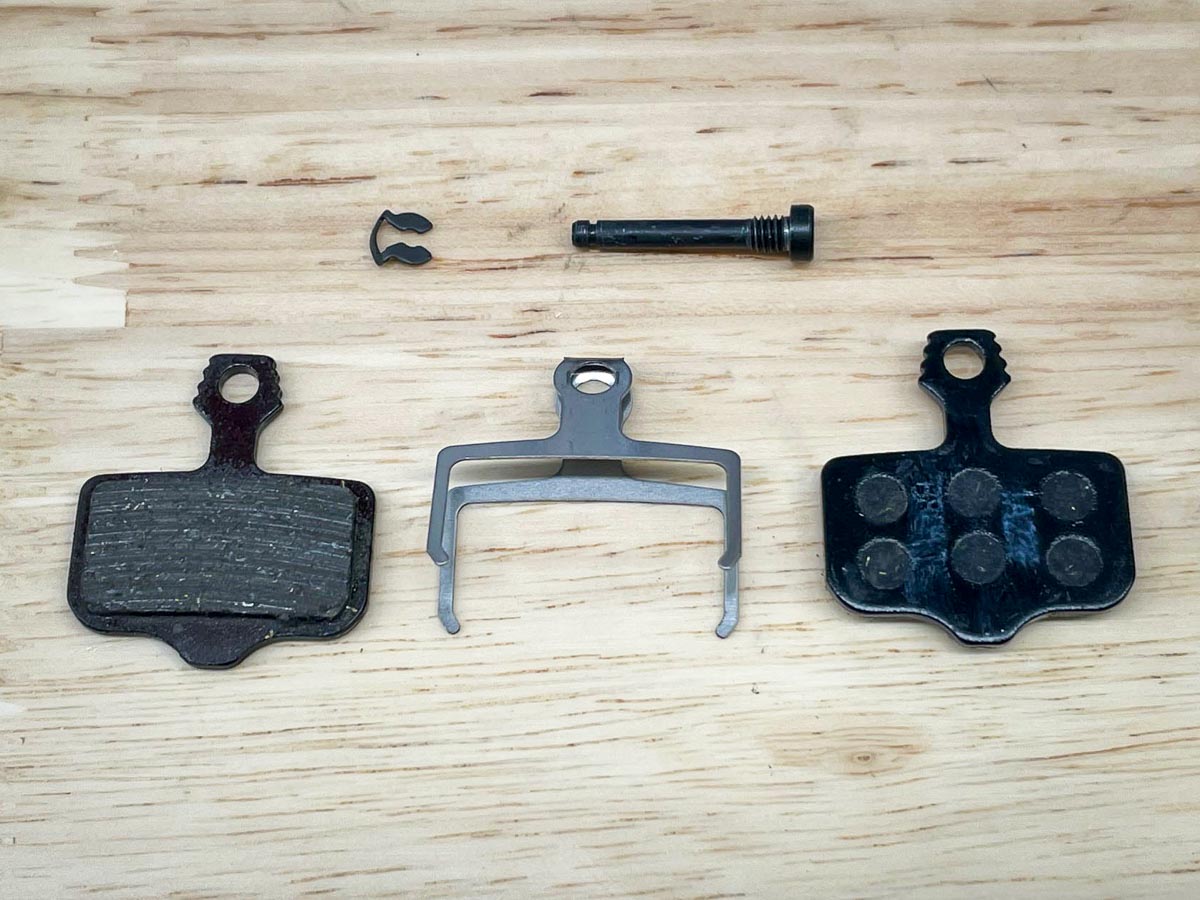 The brake pads are held in place by the usual threaded pin with a c-clip, and the pads appear to be a different shape than those used for Force eTap AXS (we’re in the process of confirming any inter-compatibility between the pads). Brake pads will be offered in both organic and sintered compounds.

Speaking of inter-compatibility, you might be wondering whether SRAM Rival, Force, and RED eTap AXS share any compatibility between groups. The answer is yes, but not for everything. Differences in derailleur capacity, and gearing may make some parts incompatible, but “12-speed Flattop chains, 12-speed cassettes from 10-28T all the way up to 10-36T, 1x cranksets, 2x cranksets (be sure to use the correct wide spindle crankset with the wide version front derailleur), shifter controls, and power meters” are all compatible through the different groups. 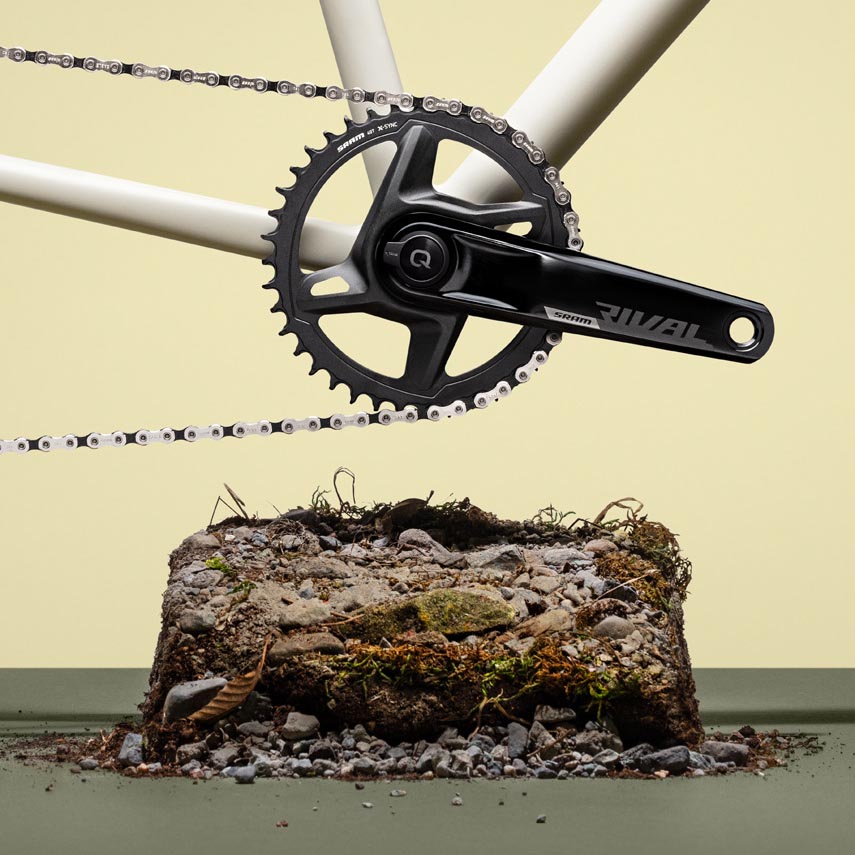 SRAM doesn’t have a gravel-specific groupset, and that continues with Rival eTap AXS. What they do have though, is a Wide version of the front derailleur and cranksets based around a wider chainline and wider stanced arms to clear bigger frames and tires.

If you opt for one of the Wide cranksets, you’ll need to match it with the Wide front derailleur as well. Because of this, there will be two different front derailleurs offered – the FD-RIV-E-D1, and the FD-RIV-EW-D1 (Wide). Functionally, they’re the same, but the standard FD is meant for the 46/33t or 48/35t chainring combinations. The Wide FD is meant for the 43/30t Wide chainring combo, and should offer clearance for up to 700c x 45mm or 27.5 x 2.1″ tires.

There are quite a few options for cranksets, but they boil down to 1x or 2x, standard or wide, and with or without power meter. All of the cranksets are designed with polished aluminum arms, and run on the DUB bottom bracket system. All of the cranksets also use a 13t gap between the two rings to maintain their X-Range gearing progression.

Standard cranks will be offered in 48/35t and 46/33t double configurations only. The Wide cranksets will come in a 43/30t double, or the new Rival 1 Wide crankset with 38, 40, or 42t chainrings. Note that the Wide cranks are compatible with 135, 142, and 148mm Boost rear spacing which is important when you consider the Rival/GX Eagle mullet build options which are now possible (and in the works). 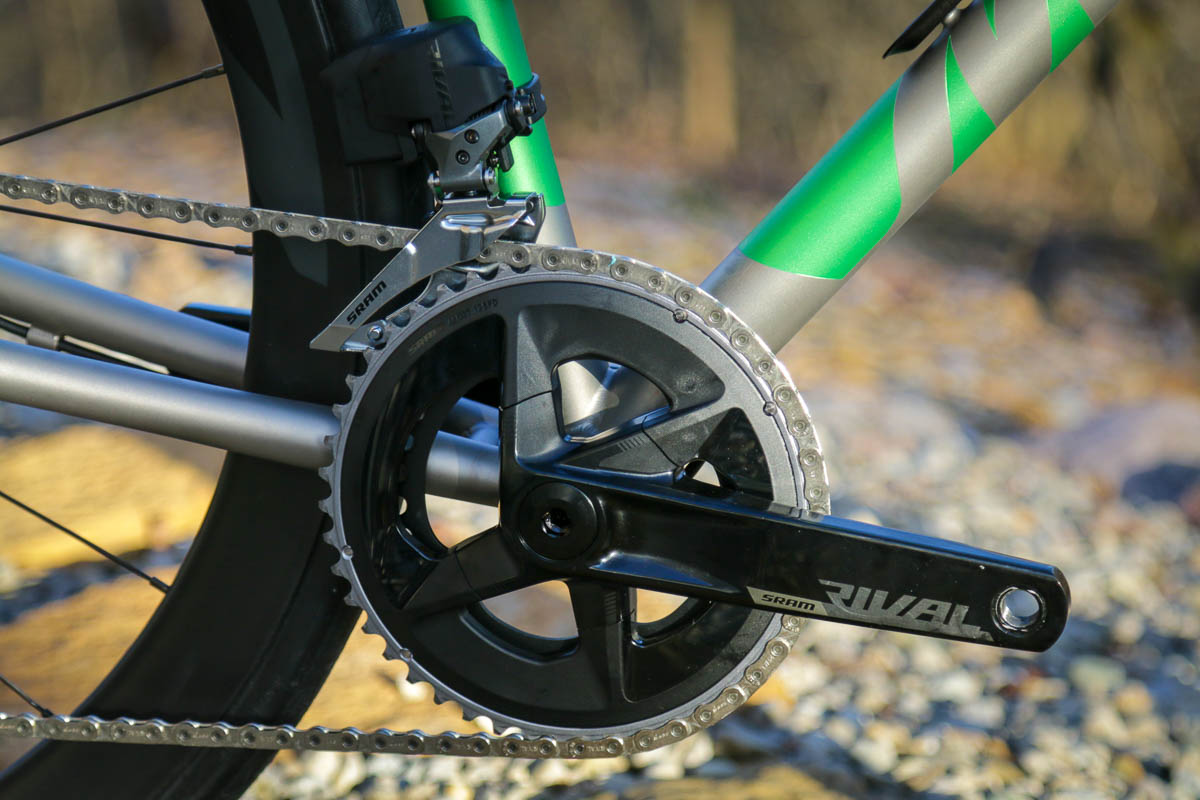 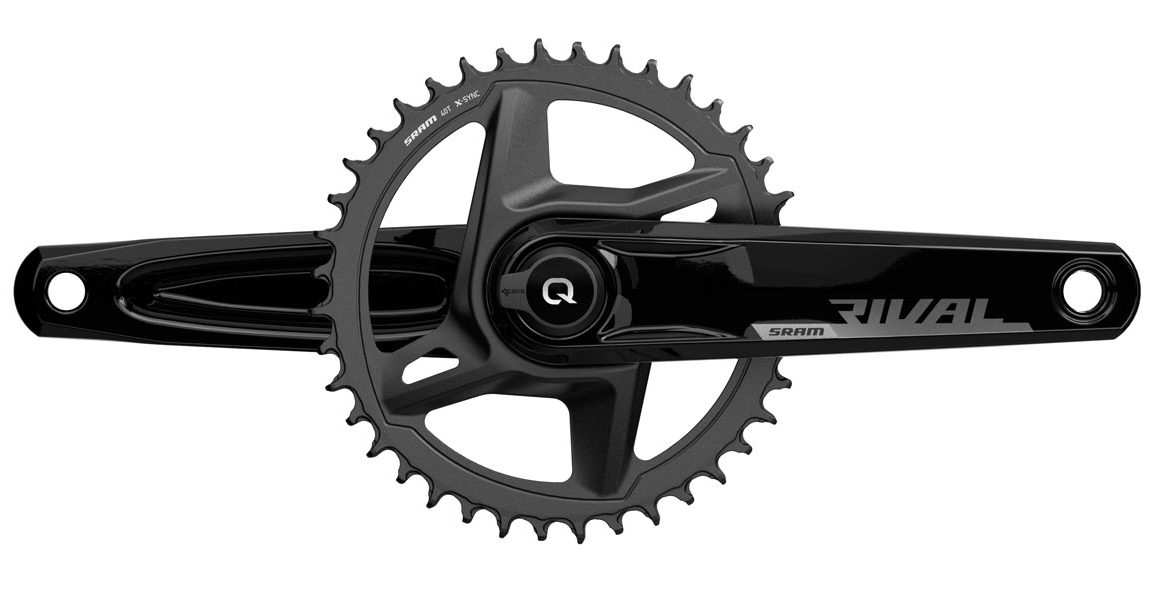 The 1x cranksets on the other hand use a direct mount chainring. Standard cranksets use a 145.5mm q-factor and 45mm chainline, and the wide spindle cranks bump up to 150.5mm and 47.5mm.

Since Rival cranks will only be offered with DUB spindles, they’re not compatible with BB90 bottom brackets. In that case, you’ll need to use one of the SRAM Force or RED cranks which are available with GXP spindles. 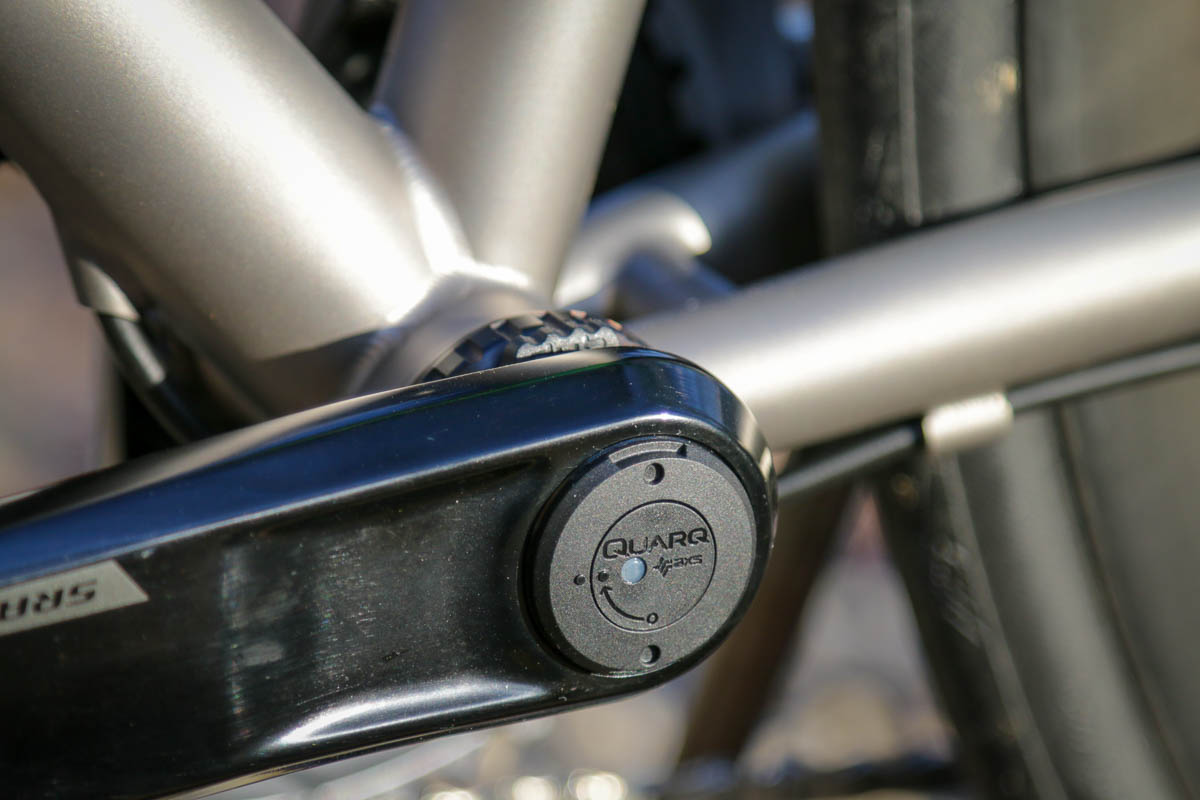 Cranksets will also have the option for an integrated power meter – made possible by the new single sided design. The spindle-based option is a new design from Quarq that is quite light, adding just 40g to the bike. The single sided nature means it only measures the left leg only, so it’s probably not as accurate as the Force or RED power meters, but it’s less expensive and powered by a single replaceable AAA battery. Both BLE and ANT+ compatible, the power meter has an IPX7 waterproof rating and can be updated by removing the internal ‘sled’ from the bike. 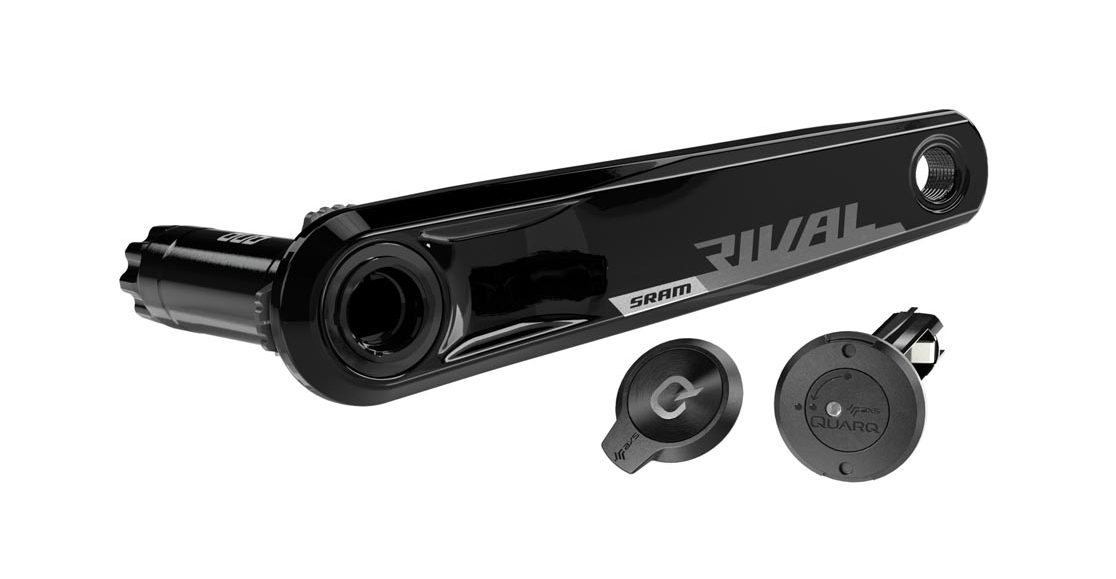 All of the cranksets will be offered with a power meter option, and there will also be the option of upgrading to the power meter in the future. Say you bought a bike with a Rival crankset that doesn’t have power? You can upgrade to power by replacing the non-drive arm and spindle assembly with the pre-installed power meter for $250. 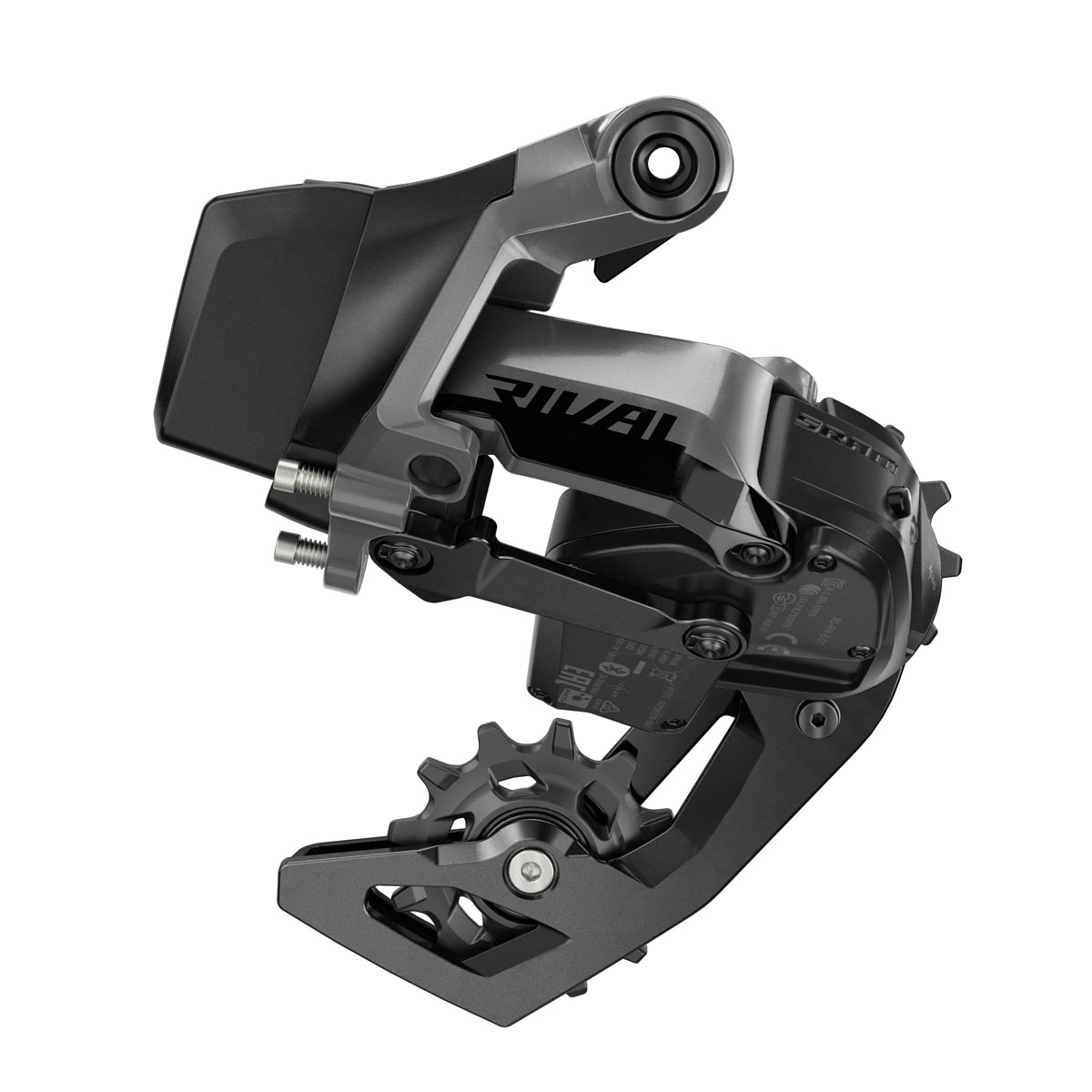 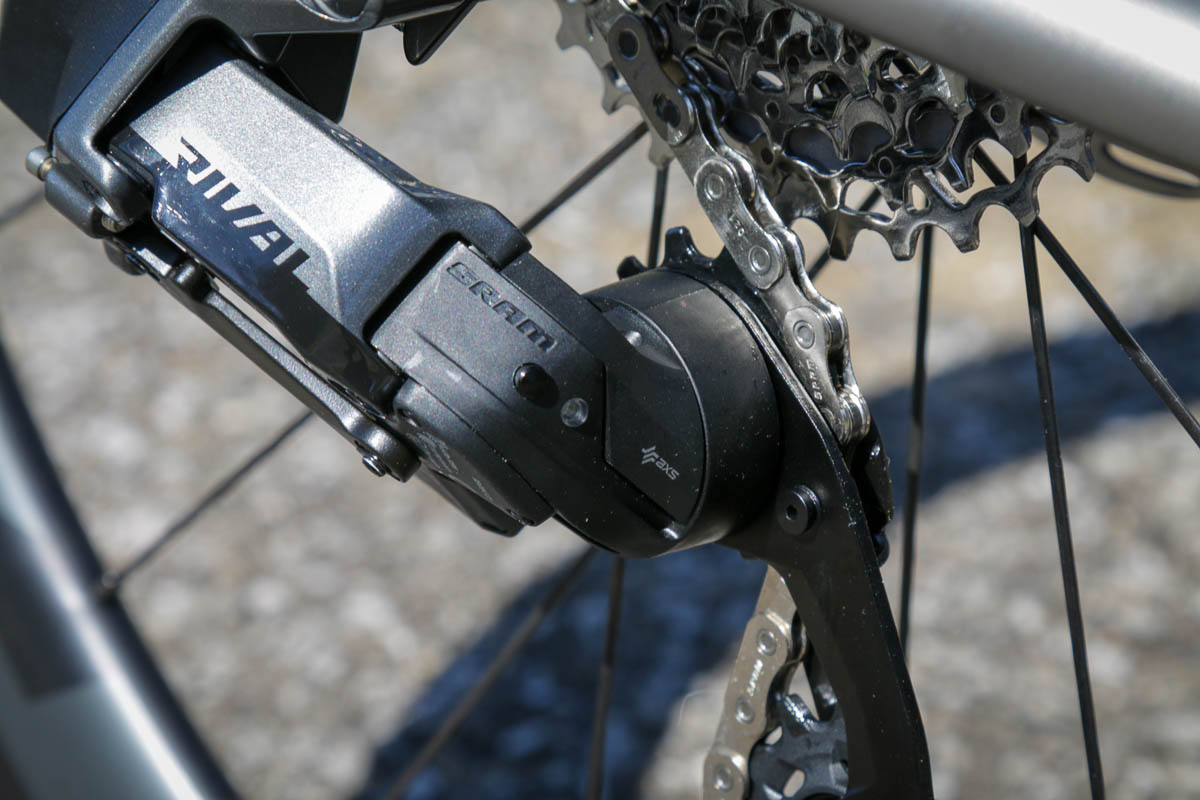 To keep tabs on the chain, the derailleur features mechanical spring clutch. That’s compared to the Force and RED derailleurs which use the more compact and lighter Orbit Fluid Damper. Constructed with all aluminum plates, the cage houses X-SYNC pulleys. 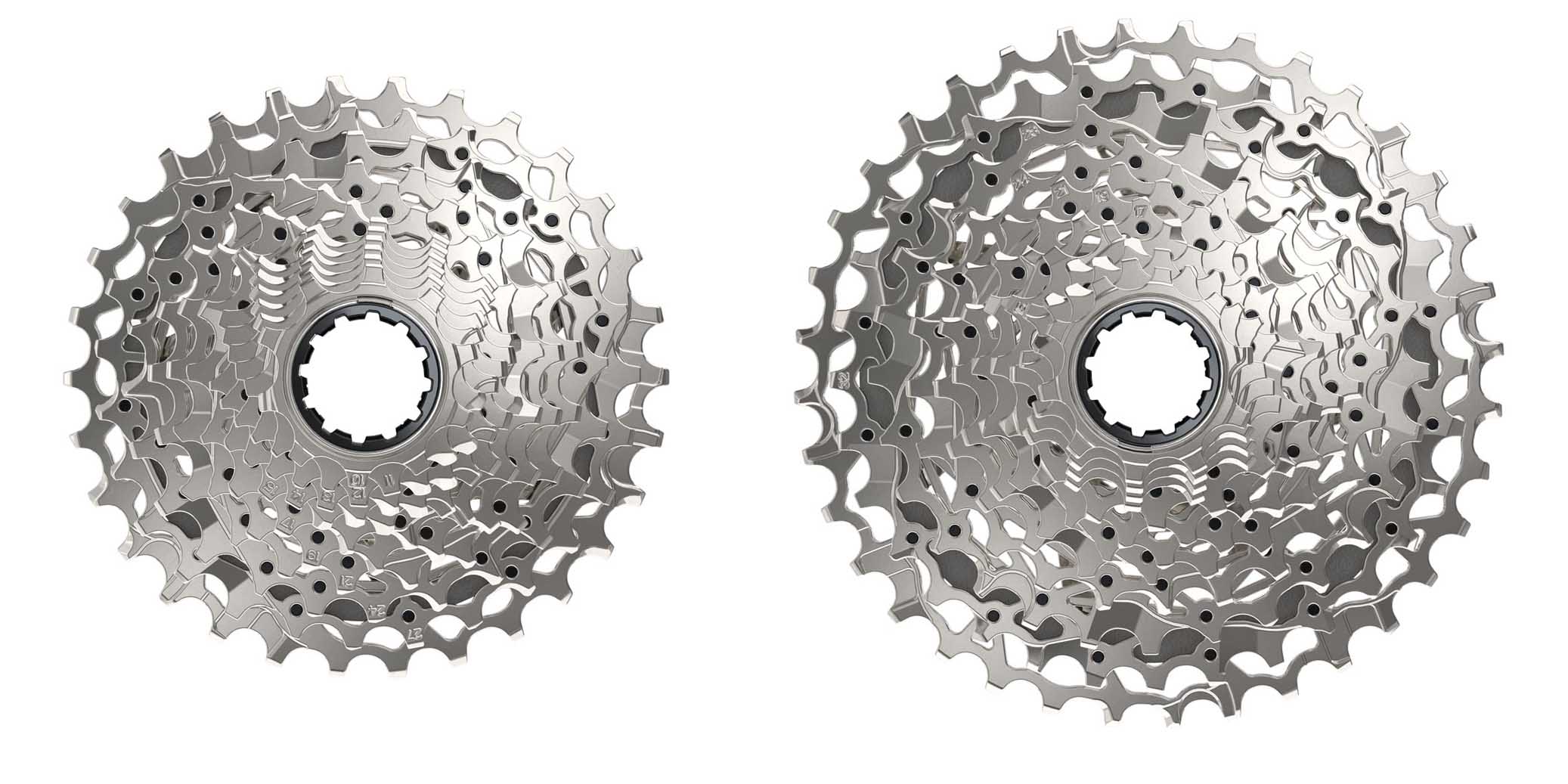 Back at the cassette, SRAM’s X-Range gearing concept offers greater range with what they claim to be better steps, using super wide cassettes and narrowing difference between chainrings. That means SRAM kept Rival 12-speed cassette options to just two choices, the 10-30t, and 10-36t. The 10-30t cassette has 300% range – more than an 11-32t, and 6 consecutive cogs at the small end of the cassette. The 10-36 is the most widely speced so far though, with 360% range compared to an 11-34 which is only 309%.

The point is that SRAM says their 2×12 or 1×12 Rival eTap AXS set up can be used for anything – Race, Endurance, and even Gravel. They point out that it offers lower gearing than GRX, without the need for a dedicated group. 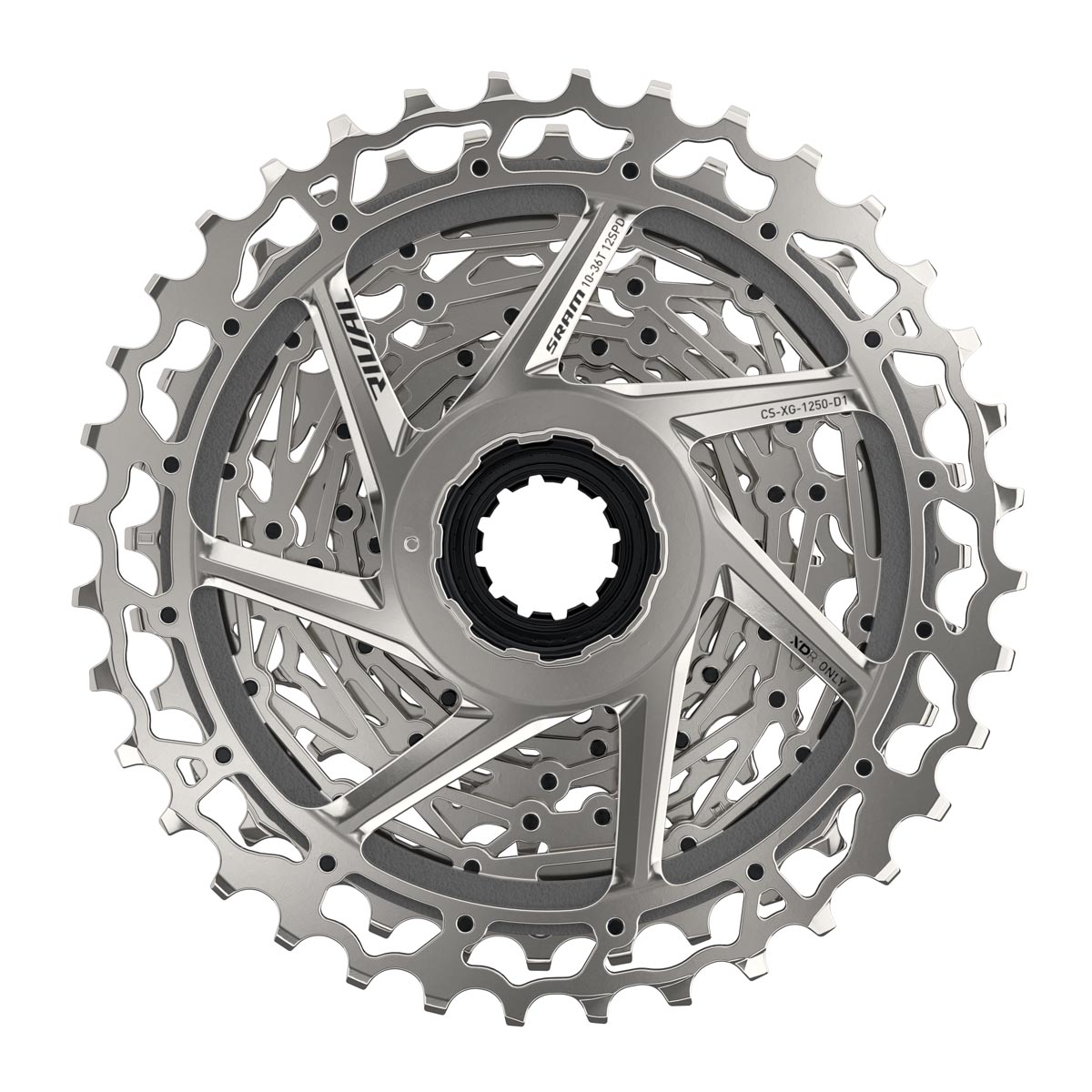 Like the rest of the eTap AXS cassettes, the Rival cassettes uses SRAM’s XDR freehub body.

The last piece of the puzzle is the chain. Like Force and RED, Rival eTap AXS requires a Flattop 12 speed chain. The CN-RIV-D1 uses the same Flattop design that has an asymmetric design with a flat top and round bottom, as well as a directional Flattop PowerLock. Differences for the Rival chain are found in the construction with RED and Force chains getting hard-chromed pins, rollers, and inner chain plates while Rival chains only use hard-chromed pins and rollers. 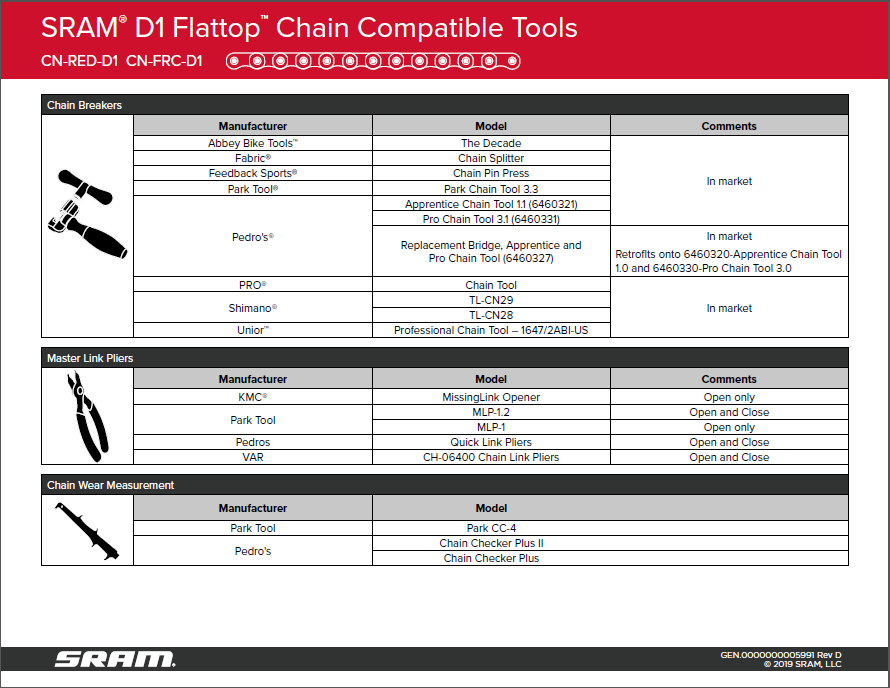 Like Force and RED chains, you’ll need a Flattop compatible chain tool to install it (along with compatible master link pliers, and chain wear tools). SRAM has a list of compatible tools on their site, but it’s not an exhaustive list. Case in point, the Wolf Tooth Components 8-Bit and standard Pack Pliers are now both compatible with SRAM Flattop chain links (both will also store spare Flattop links as well).

At a time with limited availability of just about everything, SRAM has the new Rival eTap AXS available today. They also expect that Rival eTap AXS will more than double the number of AXS bikes currently in the market.

As expected, this is the most approachable eTap AXS group yet, with the lowest price tag. Key single component prices include $30 for the chain, $125 for the cassettes, $255 for the rear derailleur, $175 for the front derailleur, and $349 for a crankset with power meter.