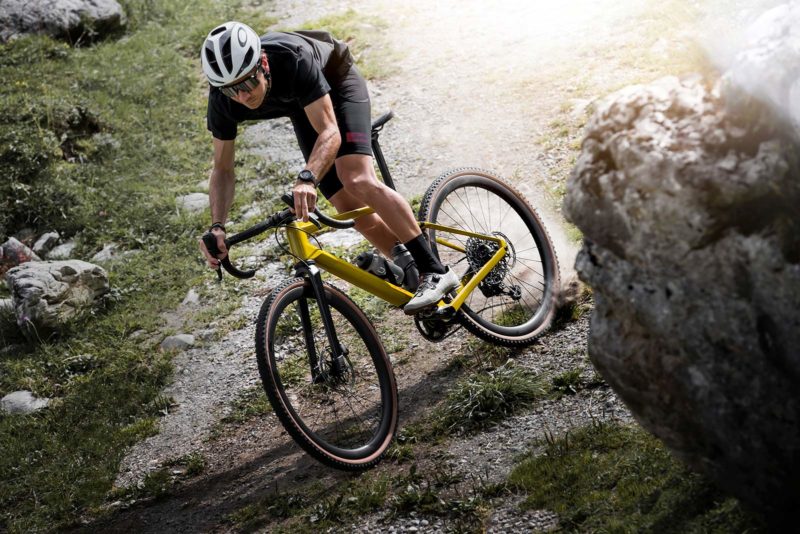 Give the all-new BMC URS LT too quick a glance and you’ll miss what makes it unique. Hidden inside the head tube is a custom, proprietary suspension steerer tube from HiRide, giving it 20mm of travel without changing the bike’s geometry.

That about matches the travel at the rear axle, thanks to their elastomer-based MTT softtail concept, creating a full suspension gravel bike that’s designed to maximize traction, confidence, and comfort for any type of ride or race. And it works really, really well. Here’s what you need to know… 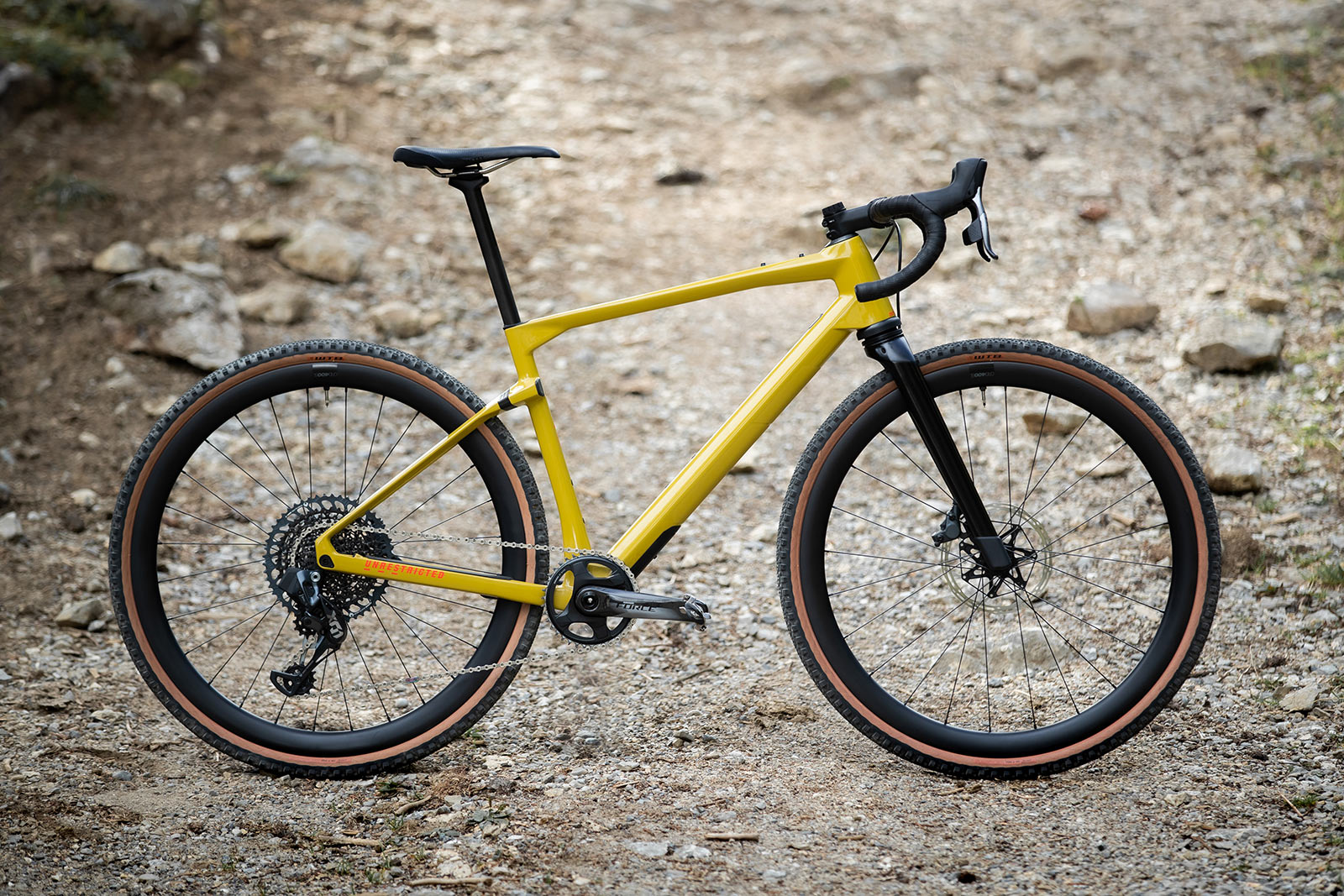 The original URS gravel bike was a big statement bike for BMC, something that was close to their heart and represented the way they frequently ride their bikes. It threw BMC aggressively into the gravel market with a capable frame and big, 45mm tire clearance.

But, turns out, they were planning for front suspension all along, and the new URS LT uses the same frame, and maintains the exact same geometry, even with the addition of 20mm of travel up front. The tech behind it is a collaboration with HiRide, leveraging BMC’s Swiss engineering with HiRide’s suspension knowledge. 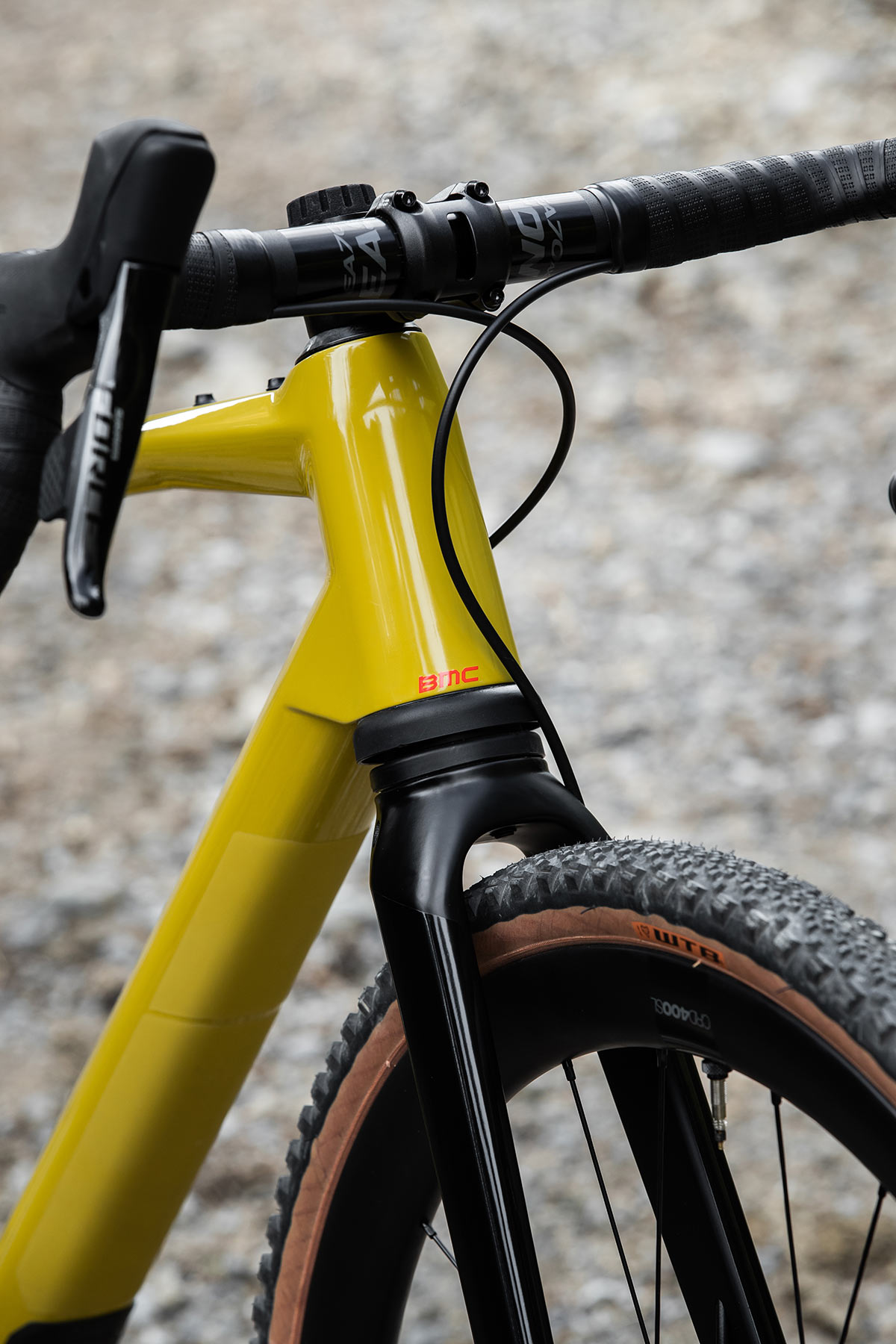 The LT means “Long Travel”, and is BMC’s common nomenclature shared across their mountain bikes, too, for longer travel versions of existing models. Here, it’s accurate if relative, with the addition of a 20mm travel headtube suspension technically giving the URS LT longer travel than the URS.

The goal was to create the perfect bike for gravel riders who take it to the next level in terms of terrain…or just spend long hours in the saddle. With the new BMC Roadmachine X sitting on the faster, smoother “all-road” end of the spectrum, and the regular URS sitting in the middle, the new URS LT sits closer to the mountain bike end of the spectrum. 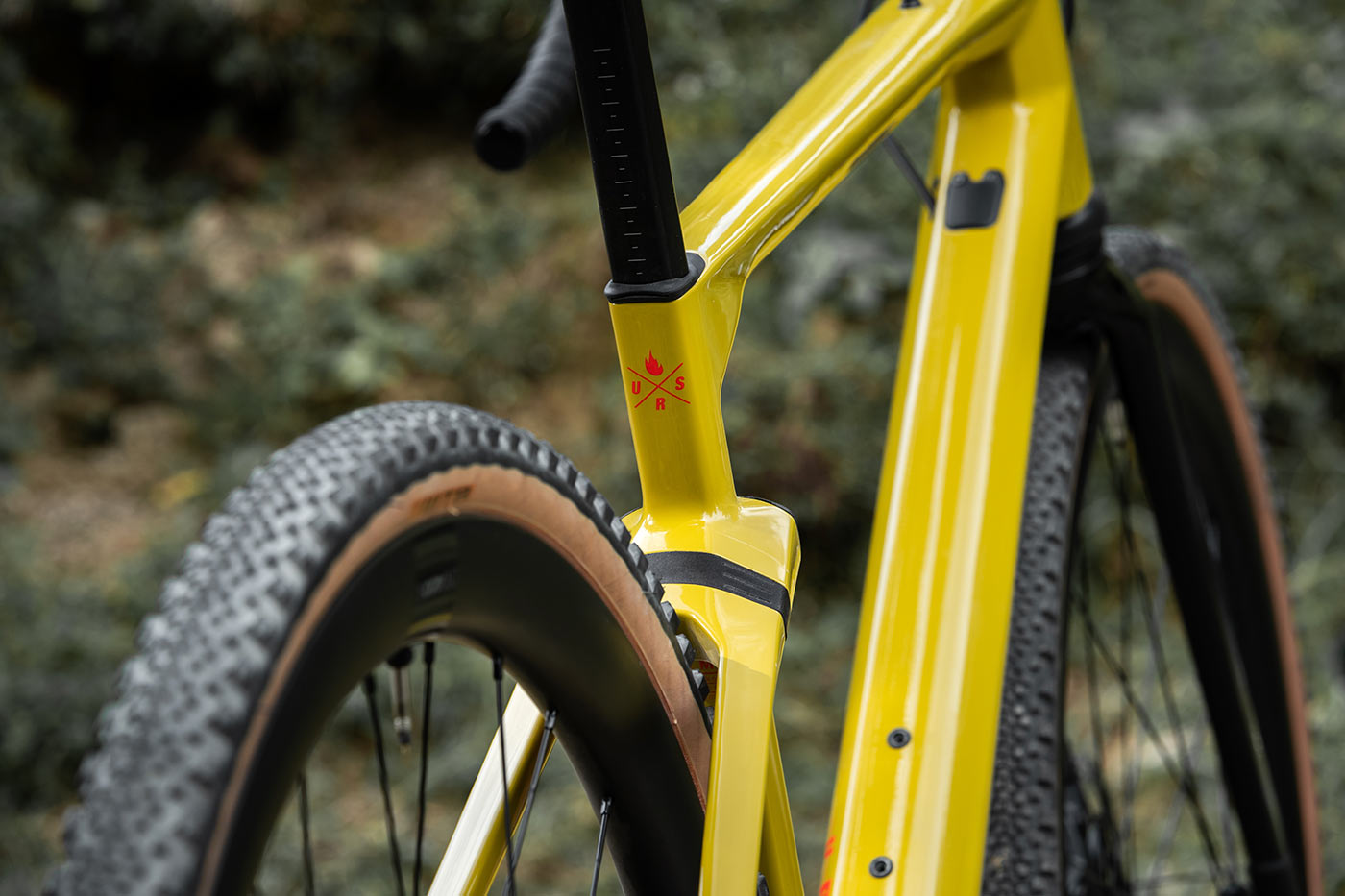 They introduced their MTT (Micro Travel Technology) micro-suspension on their hardtail mountain bike years ago. The goal was to reduce vibrations and improve traction, and it worked well enough that they added it to the URS gravel bike. Basically, it’s a small elastomer at the top of the seatstays that provides around 15-20mm of useable travel at the rear axle. Not much, but enough to soak up the chatter. 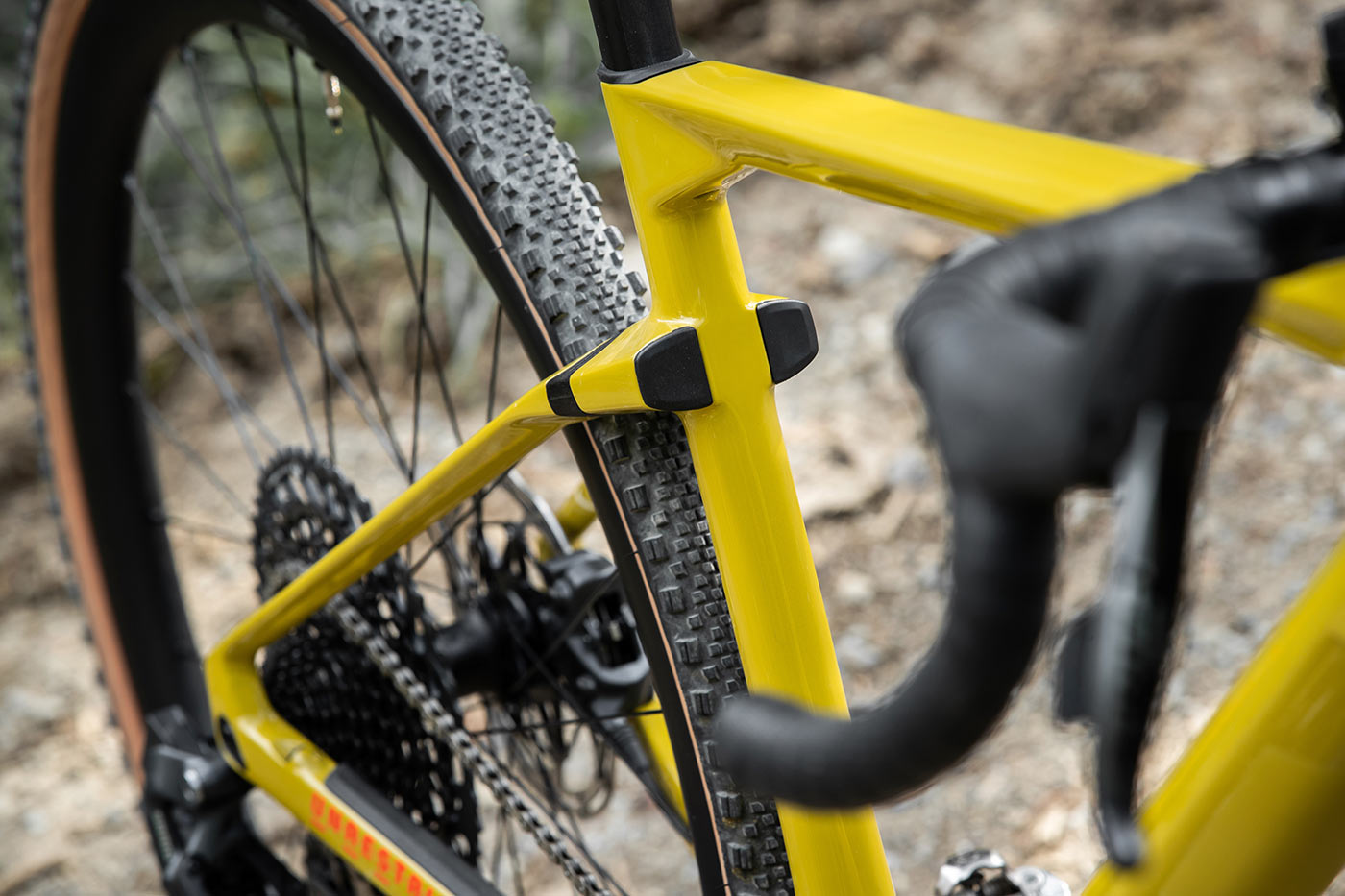 Inside the elastomer are two alloy pins that keep it moving in a straight line and maintain the rear end’s lateral stability. It’s both spring and damper, giving it a controlled compression and rebound, with a wide working temperature range. 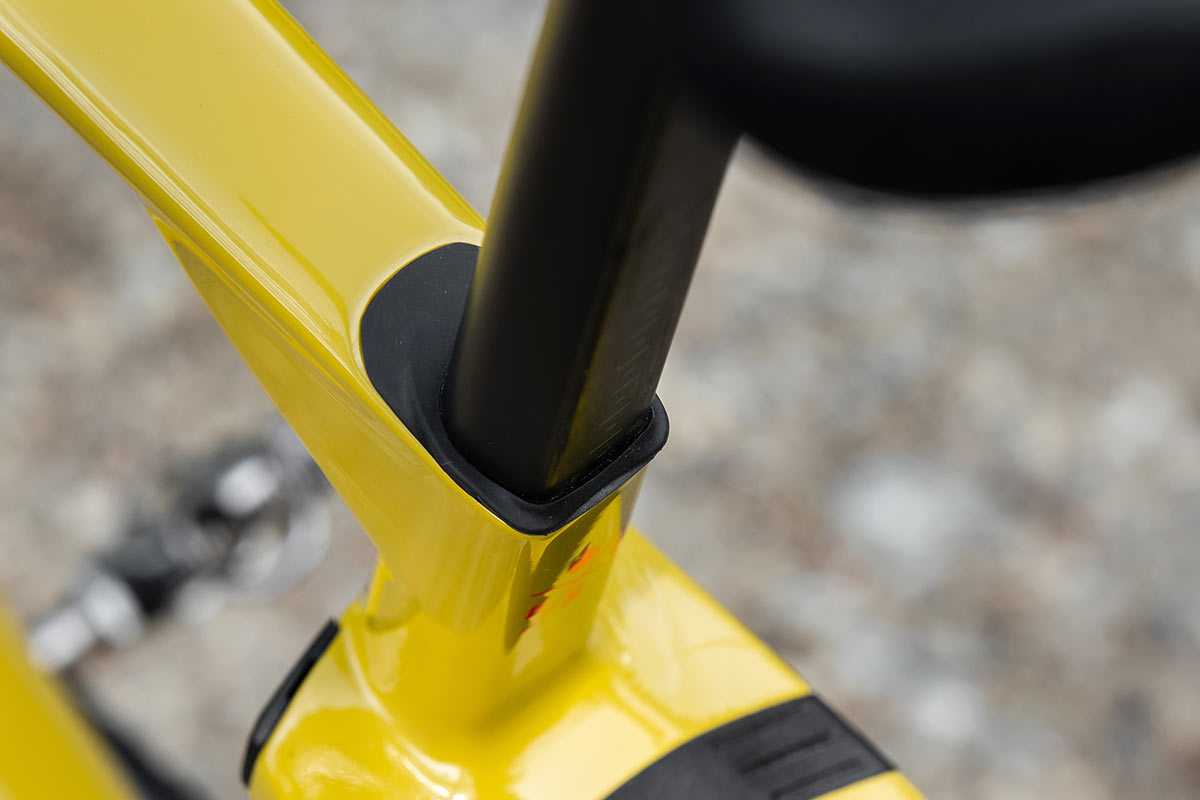 Aiding the MTT rear is their D-shaped seatpost, which builds in a little flex to further mitigate impact forces from reaching your body.

With an aggressive bike like this, though, they knew some riders would want a dropper seatpost. It’s compatible, with internal cable routing ports near the headtube, you’ll just need their adapter to fit a 27.2mm dropper post in there. 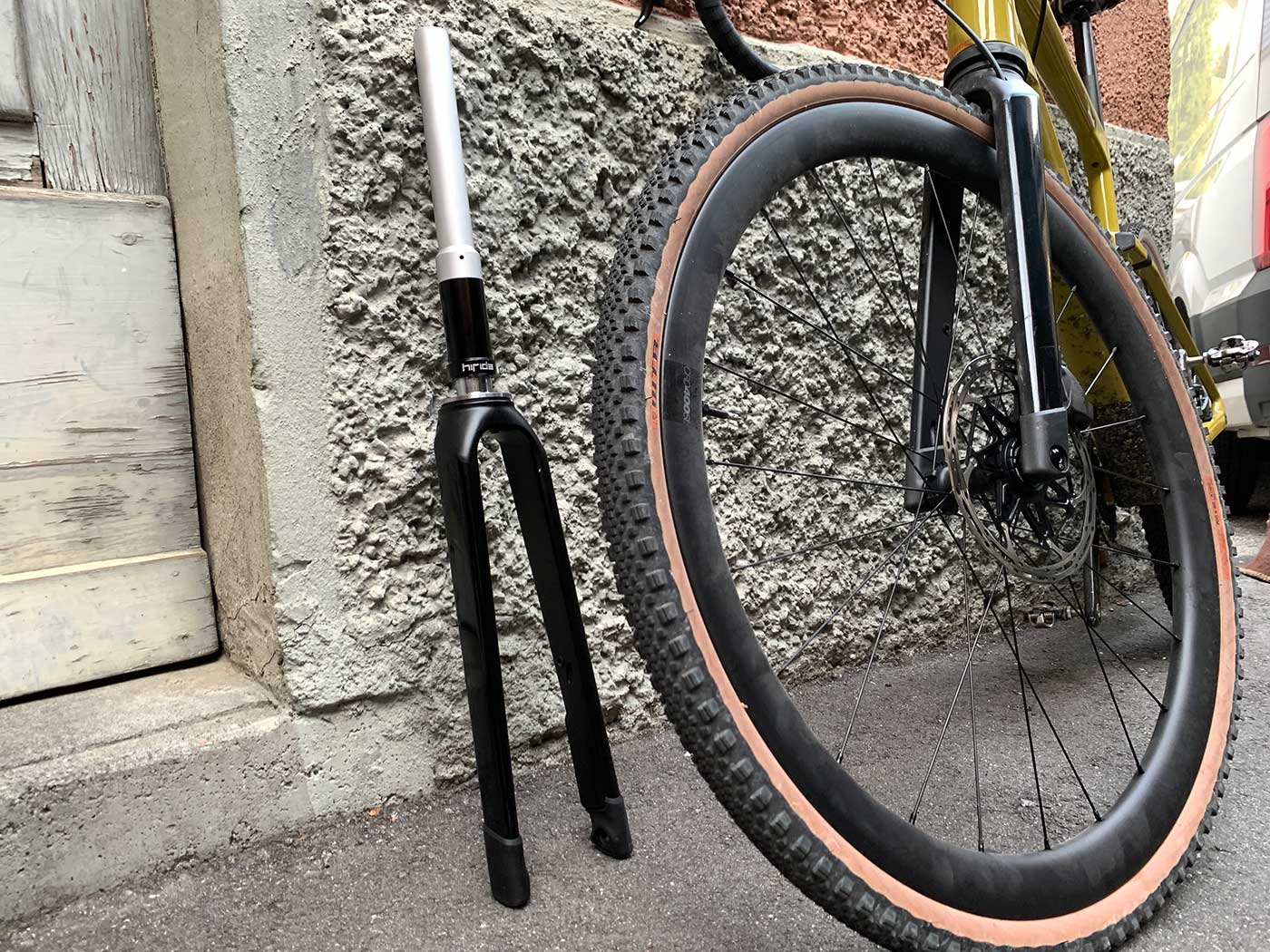 Now, they’re adding that “Micro Suspended” concept to the front of the bike, too. To determine how much travel, and how that travel should behave, they mounted sensors to a test bike and started taking hot laps around a forest trail with a tarmac return loop.

They measured the vibration spectrum, accelerations, power vs. speed efficiency, and the interaction of tire and suspension. They also looked at the options already out there (at the time, that was pretty much just the original Fox AX fork) and benchmarked their concept against that. They say that even with the current crop of gravel-specific forks, those are basically just trimmed down XC forks, and that their solution is simply a better option for this category. 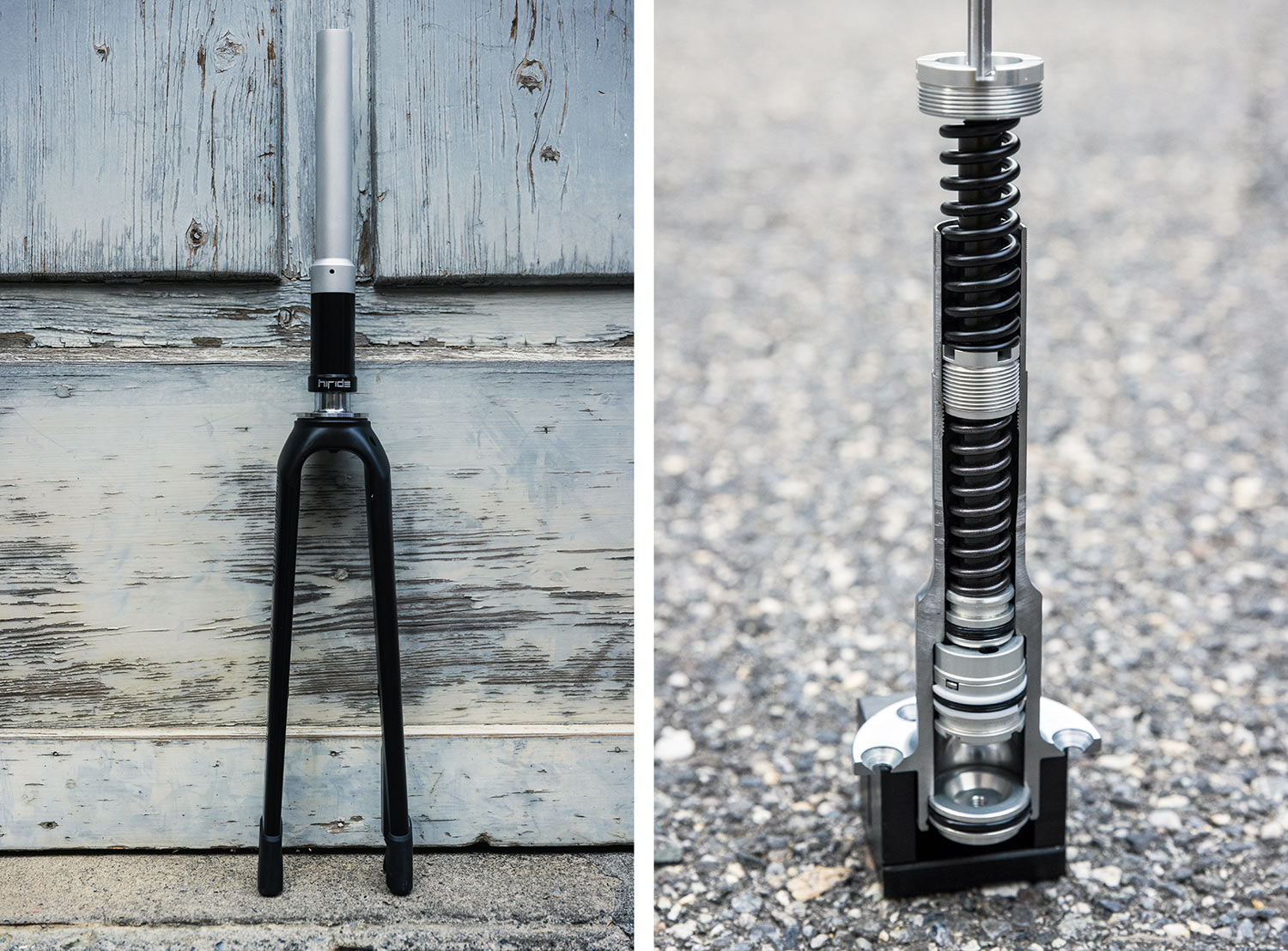 Why? Because their testing showed that the vibrations found on most gravel roads are around 40Hz, dropping to 20-30Hz as the “roads” get rougher and more trail-like. This range of frequencies meant they needed something with very low stiction, much lower than what a traditional suspension fork would have.

Combined with the rear MTT suspension, they say vibration energy is reduced overall by 46% across the entire spectrum of frequencies found in mixed surface riding. 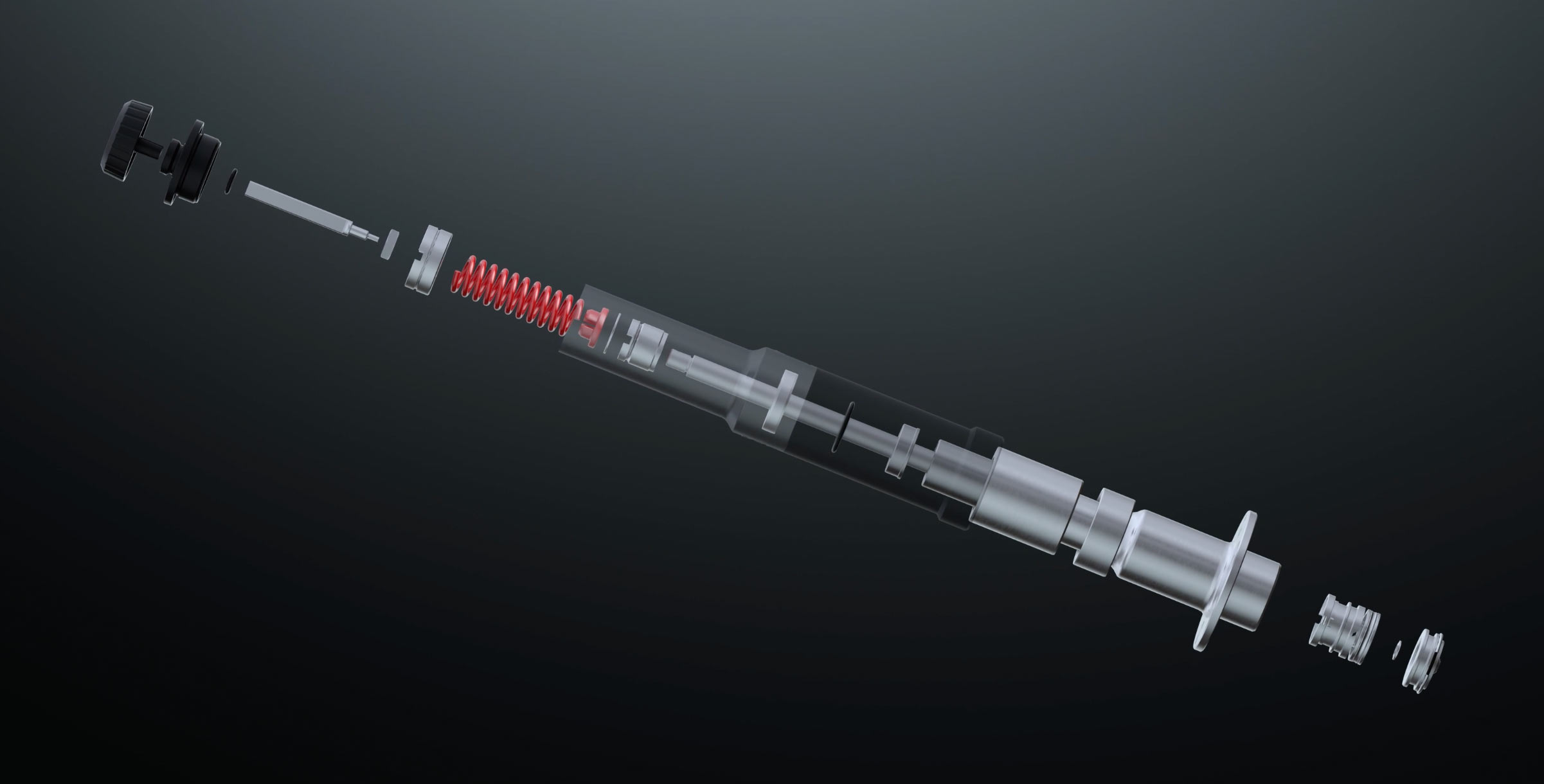 The suspension parts are all contained inside the steel-and-alloy steerer tube, using coil springs to support the load and handle the suspension. But, inside those is a hydraulic damper to control that motion. They found that even though it’s just 20mm of travel, they needed a damper to keep that travel feeling good and not just bouncing around undamped. 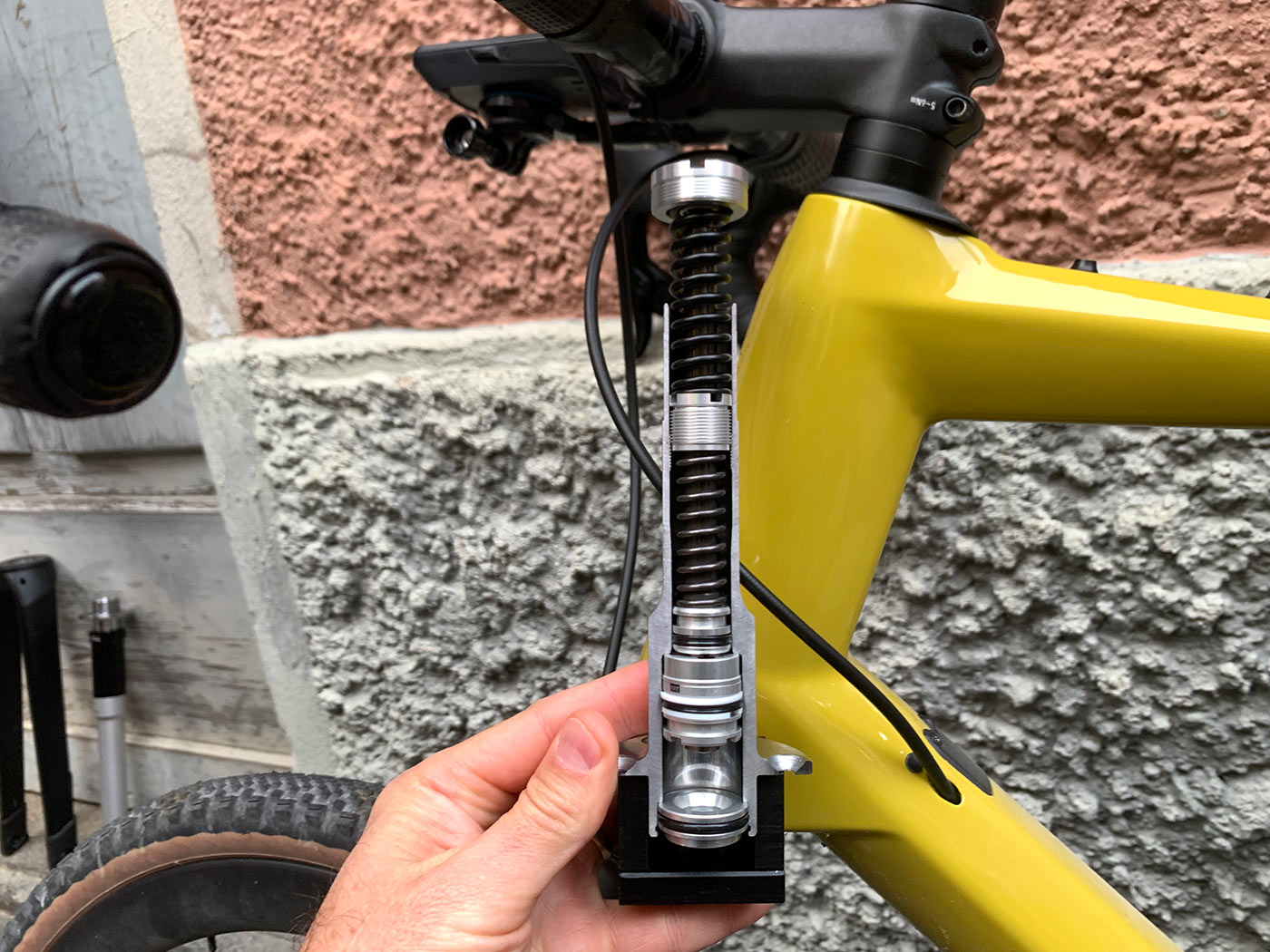 The upper spring is what suspends the rider. The lower spring is to maintain pressure on the damper to prevent cavitation…kinda like an IFP, except with less friction.

The tricky part was making a damping system light enough to handle the tiny movements coming from these vibrations. In their words, it’s a fairly sophisticated system, but uses simple steel coil springs to keep seal pressure light.

An air spring would be lighter, but the much higher seal pressure to contain the air would have introduced stiction. Even the damper uses a low-pressure design to keep the seals light. And, it uses two roller bearings between the tubes, so there are no bushings to create drag, either. You can see it in action in the video above…it’s smooooooth. 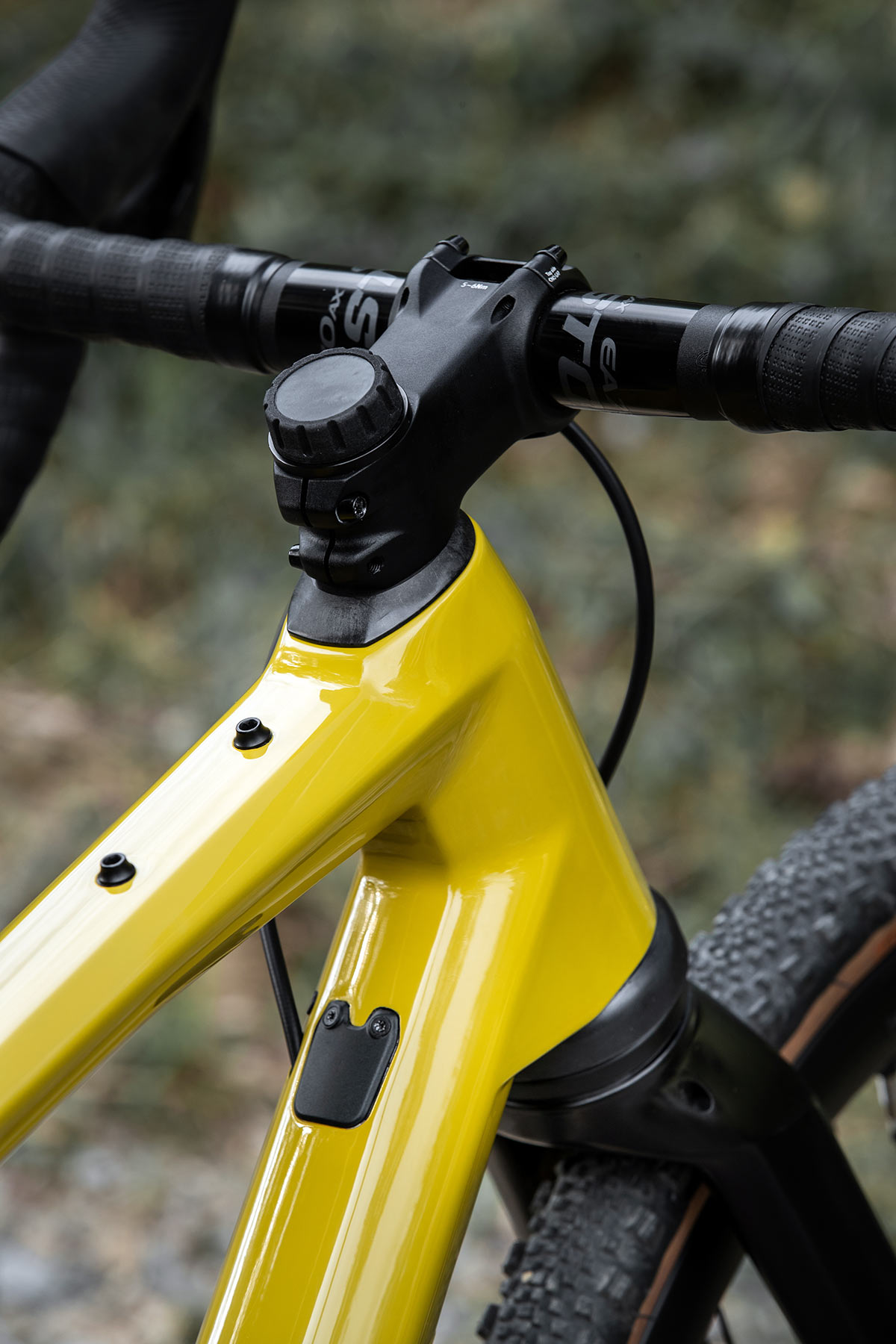 A lockout knob sits on the top of the steerer tube.

Despite cramming all of that into the head tube, steerer length and stack height are still fully adjustable. You cut the steerer tube down as much as 40mm, even on the size small frames. And it uses regular stems, albeit ones with a 1-1/4″ opening. 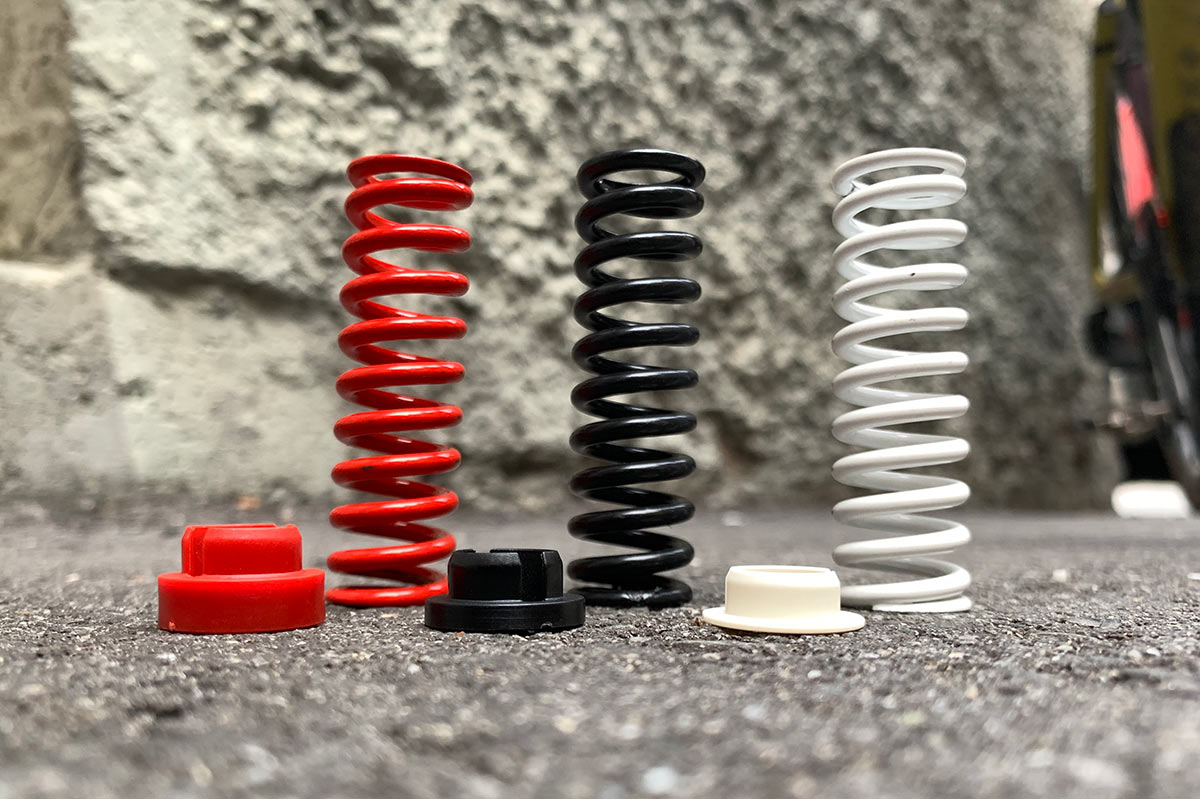 BMC recommends tuning it to 5mm of sag, which gives the fork room to rebound into small dips and maintain traction better. The sweet spot of usable travel is the middle ~12mm, with bottom- and top-out bumpers to prevent hard smacks.

This isn’t the first use of HiRide‘s steerer tube fork, it debuted on the Pinarello Dogma FS along with their electronically controlled rear shock. But, it’s the first use we’ve seen on a gravel bike, and having ridden it, we’d say this is where it belongs. Stay tuned for our full review, and check the video at top of post for riding and slow motion action. 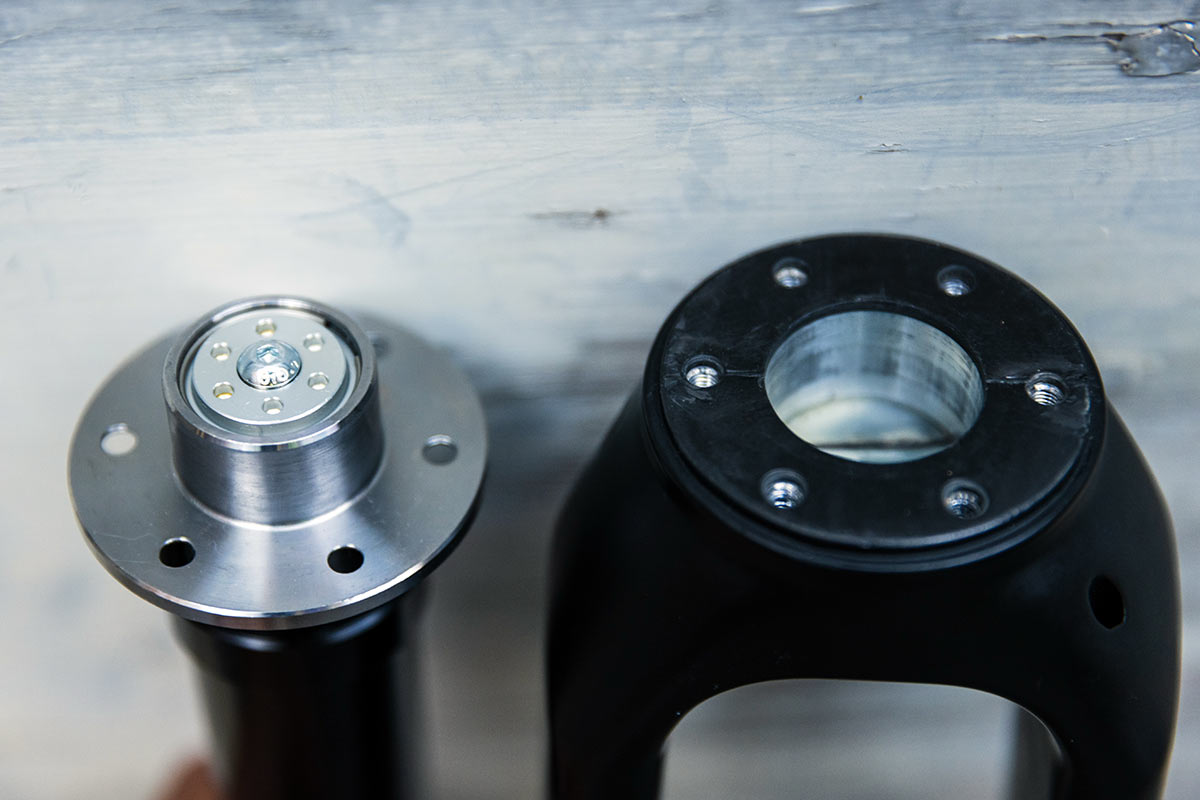 The bottom of the fork uses carbon fiber legs, which also help damp vibrations, and keep the weight down. The suspension steerer bolts into a metal base that’s bonded into the fork crown. They say it’s as durable as, and likely stiffer than, traditional suspension forks with telescoping legs. It also makes it easier to service.

They say the complete fork is just 1200g, only about 750g more than their standard rigid fork, but still a couple hundred grams (or more) lighter than a traditional suspension fork.

With 5mm of sag on the fork, the URS LT geometry matches the original URS.

Key specs and features include: 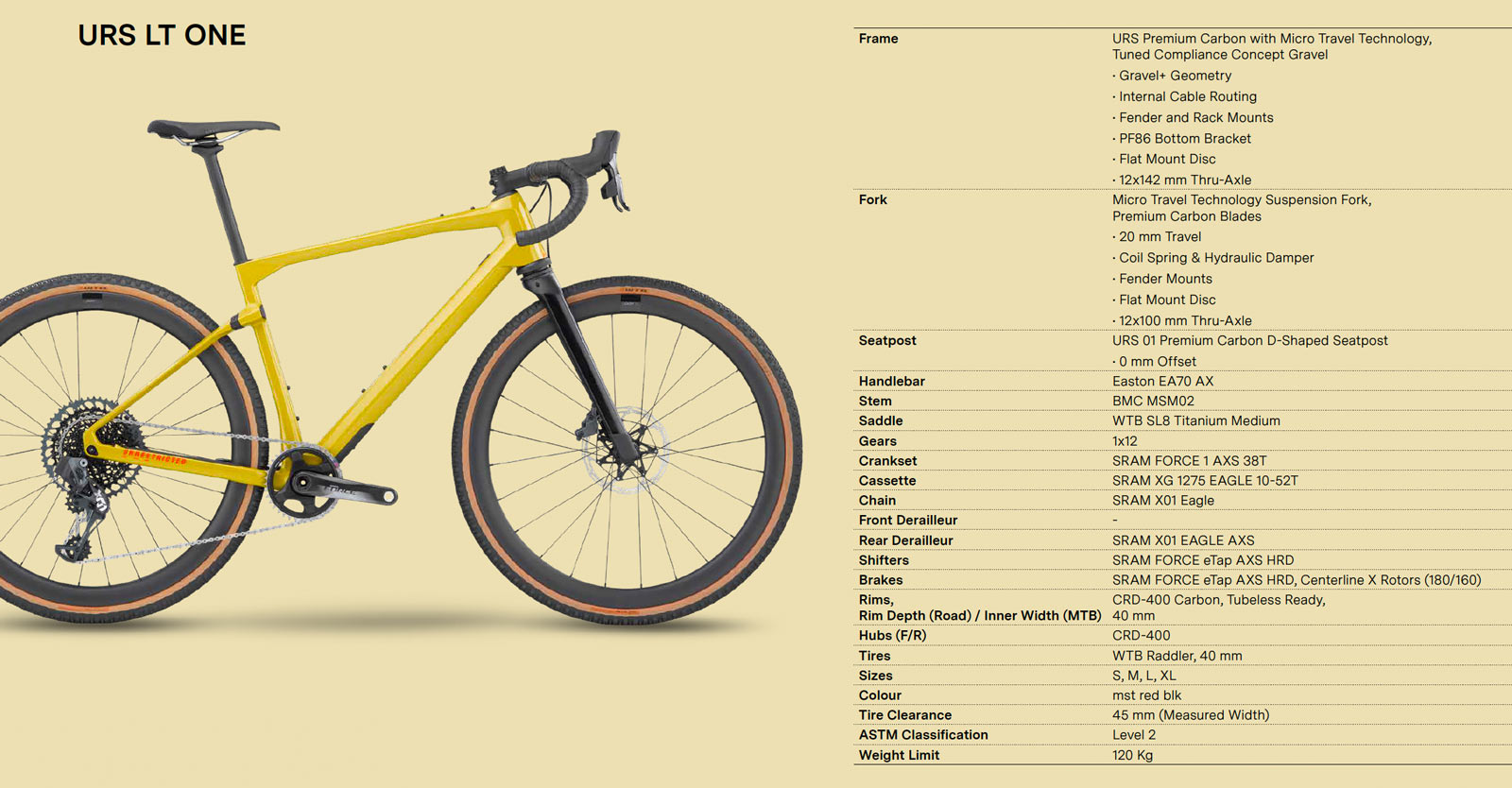 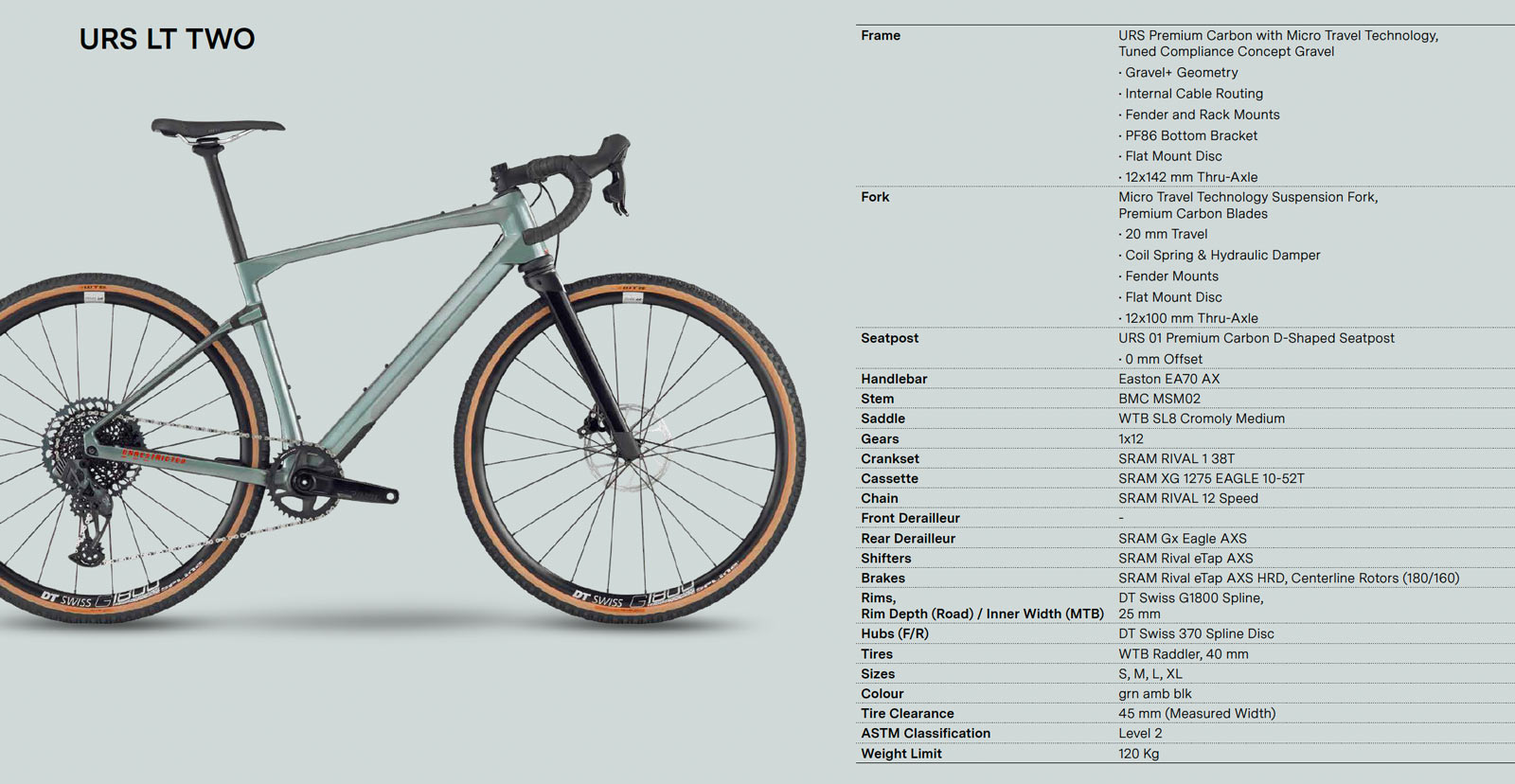 Stay tuned for our full review…