While a bit strange, the concept of a bicycle rack for a motorcycle is nothing new. In fact, two wheel enthusiasts have been building them out of their garages for years. While the thought of a bicycle attached to a motorcycle may conjure up some strange images in your head, it really isn’t all that hard to understand, especially due to the fact that a lot of us out there seem to have a love for all things two wheeled, not just bicycles.

For years, those with motorcycles and bicycles in their garage were forced to ride one or the other, and if the bicycle was chosen and the riding destination was far away it meant leaving the more efficient and fun to ride motorcycle for the bicycle carrying capacity of a car or truck. It is for these exact reasons, that individuals began searching for a means to carry a bicycle on the back of a motorcycle in a safe, effective, and easy to use way, which in turn, gave rise to the various home brew motorcycle bike racks.

What makes the Johnny Rack G2 different from the 2×2? Who was first? Find out after the break!

With the general motorcycle riding public forced to manufacture their own racks in the confines of their homes with limited manufacturing equipment, it was only a matter of time before the first commercial racks hit the streets. The earliest example we were able to find, was the Cycle By-Cycle Carrier that was the brain child of Mark Schuette and were all hand made out of Oregon. Even without any exact dates, it is pretty clear that this was most likely the first attempt at a commercial motorcycle bicycle rack. Commercial is a pretty loose term however, as in this case it simply means “able to be purchased.”

Fast forward a few years to 2006, which is when James Ginther started making racks in his garage for friends and later launched Johnny Rack, Inc. in 2007.  Johnny Rack applied for their first patent in January of 2008 and are still currently patent pending. Johnny Rack went on to be one of the best selling (perhaps only) motorcycle bicycle racks with their first Generation which was basically a sub frame that housed a Yakima Boa, and supported the bike on the downtube. Most recently, Garrett Blake started a new company 2×2 Cycles, and announced its own rack, dubbed the 2×2. According to a press release circulating the interwebs currently, the 2×2 is “the first motorcycle bicycle rack of its kind,” and unless they are arguing that it is the first rack to support a bike by the crank, their claims are obviously false. Keep in mind though, that it was worded as such, only in the press release, and 2×2 does not make those claims on their website. Now that that is done, let’s move onto the racks, shall we?

The big news here, is that while Johnny Rack’s first iteration was more or less a way to mount a Yakima Boa (purchased separately) to your motorcycle including a way to hold the front wheel, Johnny Rack is very close to releasing the next generation, Johnny Rack G2! What you see above are CAD drawings of prototypes of the new racks. While the G2 will still support the bicycle from the downtube, the fork mount is now integrated into the rack (no more Boa), and the G2 will have the ability to add on an adjustable rear wheel holder to shorten the load, and make the whole unit more compact. The add on rear wheel holder will also be sold with a chain tensioning device so the chain isn’t just flopping in the wind.

While both racks will carry a bike, between the Johnny Rack and 2×2, there are some pretty fundamental differences. Perhaps the biggest difference is the way in which they attach to the motorcycle. 2×2 utilizes a plate that is clamped around the factory luggage rack on the motorcycle, which will potentially allow for wider range of fit. Johnny Rack however, prides themselves on having a rack that is attached directly to the motorcycle’s sub frame which guarantees the most solid connection and means that there is no need for a tie down strap around the handlebars of the bicycle as is needed for the 2×2. While the connection is no doubt stronger, this also means that different motorcycles will need specialized Johnny Racks, which they are offering for 8 different motorcycles initially. 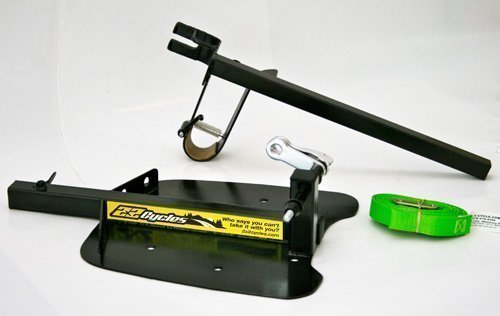 The other glaring difference between the two racks, is the method by which they support the rest of the bicycle aside from the fork clamps. Johnny Rack accomplishes this by using a downtube support arm that adjusts for different sized frames, so the bicycle won’t drop down in front of the tail light of the motorcycle.  The downtube support features a soft rubber pad with rubber strap that is designed to hold the down tube gently and miss any cables that may strafe the down tube. James claims that even without the rubber strap in place, the bicycle will not bounce out of its cradle, and that the entire system has already been tested on hundreds of miles of rough dirt and gravel roads.

2×2 however, instead of supporting the down tube, uses a sort of pocket that you use to hold the bicycle up by its non drive side crank. The metal pocket is lined with a rubber coating to prevent damage to the crate, and one the crank is in place, a quick release is installed, which prevents the crank from pulling out as the QR hits the pedal. Currently the 2×2 only has the option of holding front wheel, but like the Johnny rack it is prevented from spinning once it is secured as spinning wheels causing a gyroscopic effect on the back of a motorcycle would be a very bad thing.

Currently, the planned list of compatible motorcycles for the Johnny Rack G2 is as follows:

James states that if things go well, more models will be added later. When asked about pricing (this is still a prototype after all), James said, “The main rack with adapters with the front wheel holder included will be less than $399.  Each version is priced differently.  The rear wheel holder option (which will include a chain support so the chain doesn’t just hang and flop around in the wind) will be $95.  The Rack Pack (for shoes and helmet) will be $59.” The rack pack, as shown above, is a convenient way of storing your bicycle shoes, helmet, and a few essentials, that is designed to fit conveniently between the bicycle fork and bottom bracket on the back of the motorcycle.

The 2×2 rack is currently available for Honda, BMW, Kawasaki, KTM, Harley Davidson, Suzuki, Yamaha, Triumph, Aprilla, and Ducati motorcycles. Compared to the Johnny Rack without the rear wheel holder it comes in a bit cheaper at $279

(When ordering, you will be asked your motorcycle model).

Nice – I’ve heard of people rigging their own Yakima racks for many years, but this is the first commercial product I’ve seen.

All of them loose, mine is done correct and doesn’t hang off the back.

Is Johnny Rack still in business? Their website seems to be down.

Shane, sorry to burst your bubble, but on a real motorcycle, I prefer it off the back, maintain a narrow profile, no effect on body positioning during cornering, or lean angle…

I’m hoping to buy a Victory motorcycle and am hoping the 2×2 can work with it. I’d be interested in a picture of what Shane is talking about. I’d think that a rack for the frame to sit right behing the rider (sorry girlfriends) with a wheel fastened to each side would give a low profile to the wind and no “hanging off the back problems”

I have a 2004 Victory Kingpin. I have been searching for something for months and feel I am forced to fabricate something myself. Let me know if you see otherwise.

Cuz at the Warp speeds he’s going to be travelling on that scooter, Shane obviously needs to worry about how loos his bike is attached.

Another option – I tow a Bushtec Turbo trailer behind my Goldwing GL-1800 (the other end of the spectrum from Shane’s scooter). I just mounted Yakima Landing pads lp6 and control towers on the fiberglass trailer lid. I got some 48″ round bars off ebay and cut them to match the width of th trailer lid. Sprocket rocket or viper go on next.

Come on, Shane. That’s a scooter.

Shane, i like it. Just worked out a prototype for my Harley Softail. Modified a sissu bar rack to hang my cycle by the seat tube, balances fine on its own but needs bungeys to secure. Will try out for aerodynamics and handling but its a Softail so don’t have much of that anyway 🙂

PS keeps the weight lower too, don’t like so much stuff that high up

My motorcycle, an electric Brammo Enertia Plus has no rack to attach a bike rack. I wonder if there is a way to have a bar coming out of the center of the rear motorcycle wheel and attach the bike rack to that?