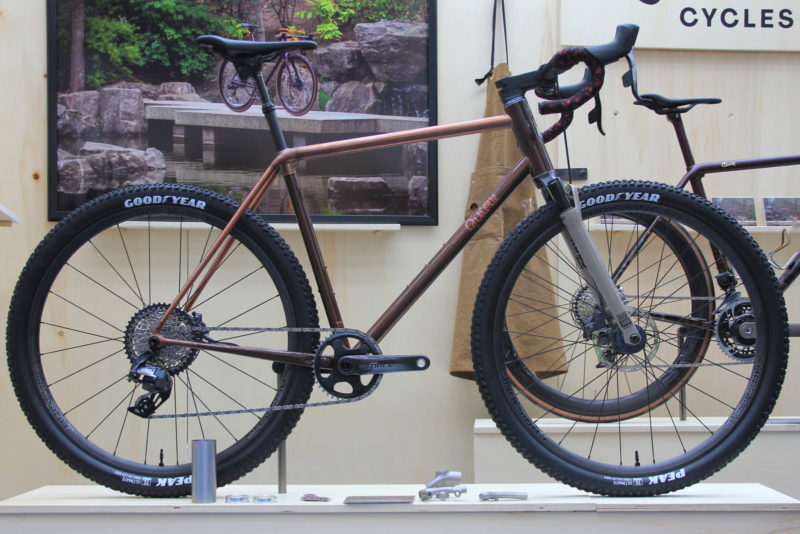 Here, we present you some of the tastier handmade gravel bikes set out proudly on display at Bespoked 2022. The variety was good, with a titanium flat bar gravel bike made in Australia, a gnar-worthy gravel bike made in London, and an award-winning hand-laid carbon gravel bike made by a recipient of the SRAM-Bespoked Inclusivity Scholarship, plus more from Enigma Bikes, Lord Cycles, Windover Bikes and Reilly Cycle Works. 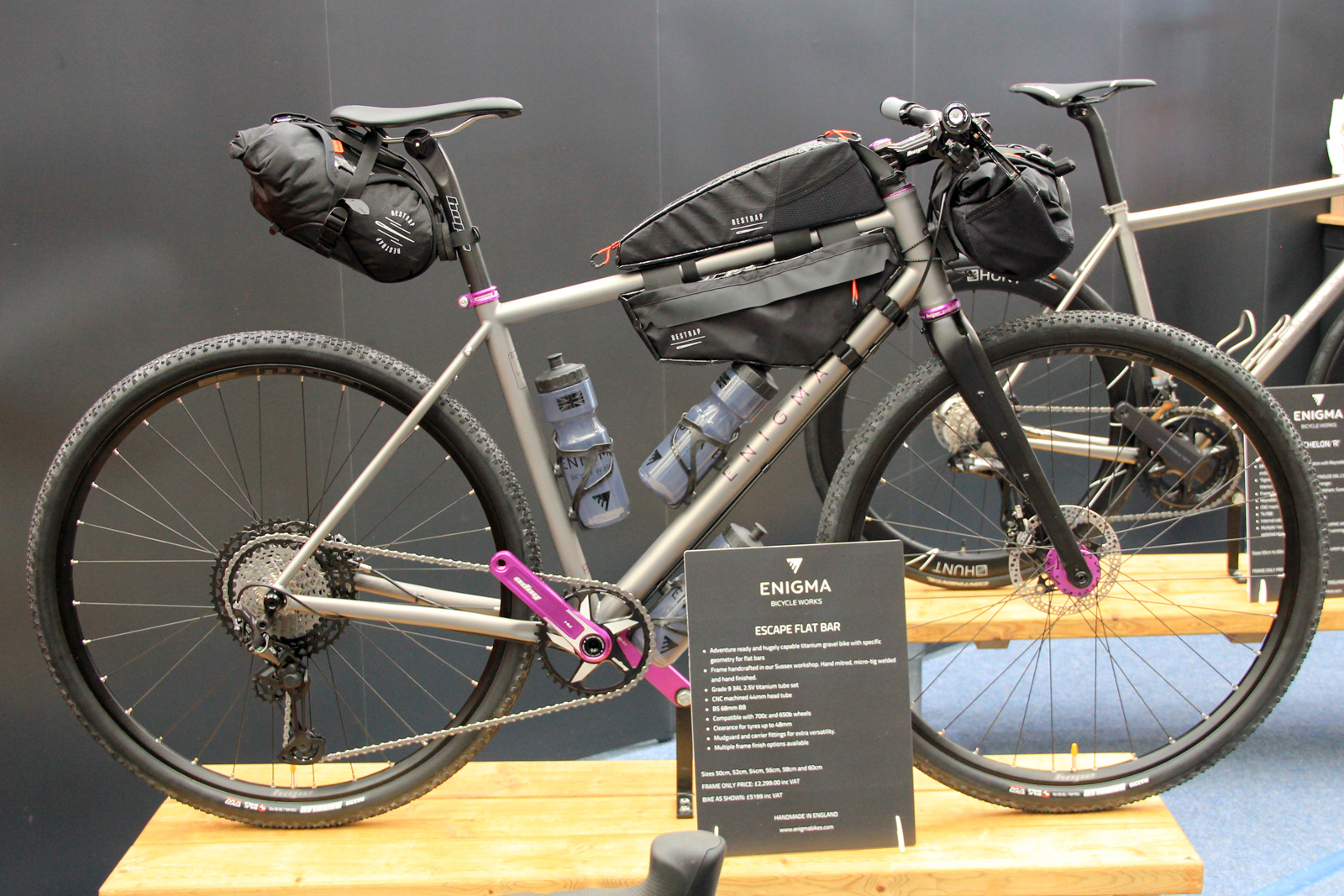 Enigma Bikes were showing the Titanium Escape Flat Bar Gravel Bike; yes, a gravel bike with a geometry designed specifically around a flat bar. It is hand-crafted from a Grade 9 3AL 2.5V titanium tubeset and a CNC machined 44mm headtube. The tube mitreing, tig-welding and finishing is all completed at the Enigma Bike workshop in Sussex, England.

As you can see, this one is very much adventure-ready, bedecked with multiple frame bags from Restrap and a carbon fork with multiple bosses for the carrying of Anything Cages. It can also accomodate mud guards as needed. It can run a 700c or 650b wheelset, with clearance for up to 48c tires. 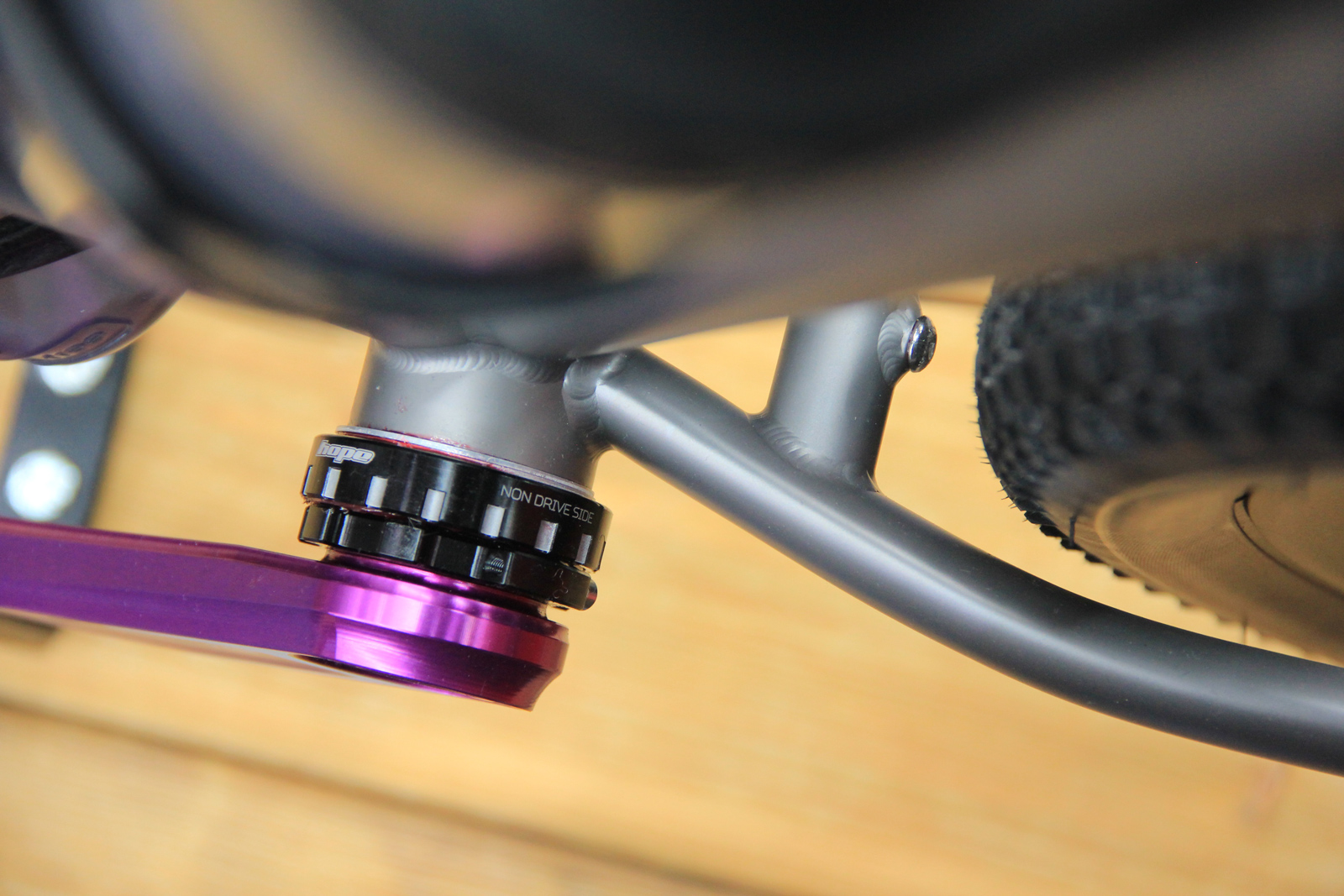 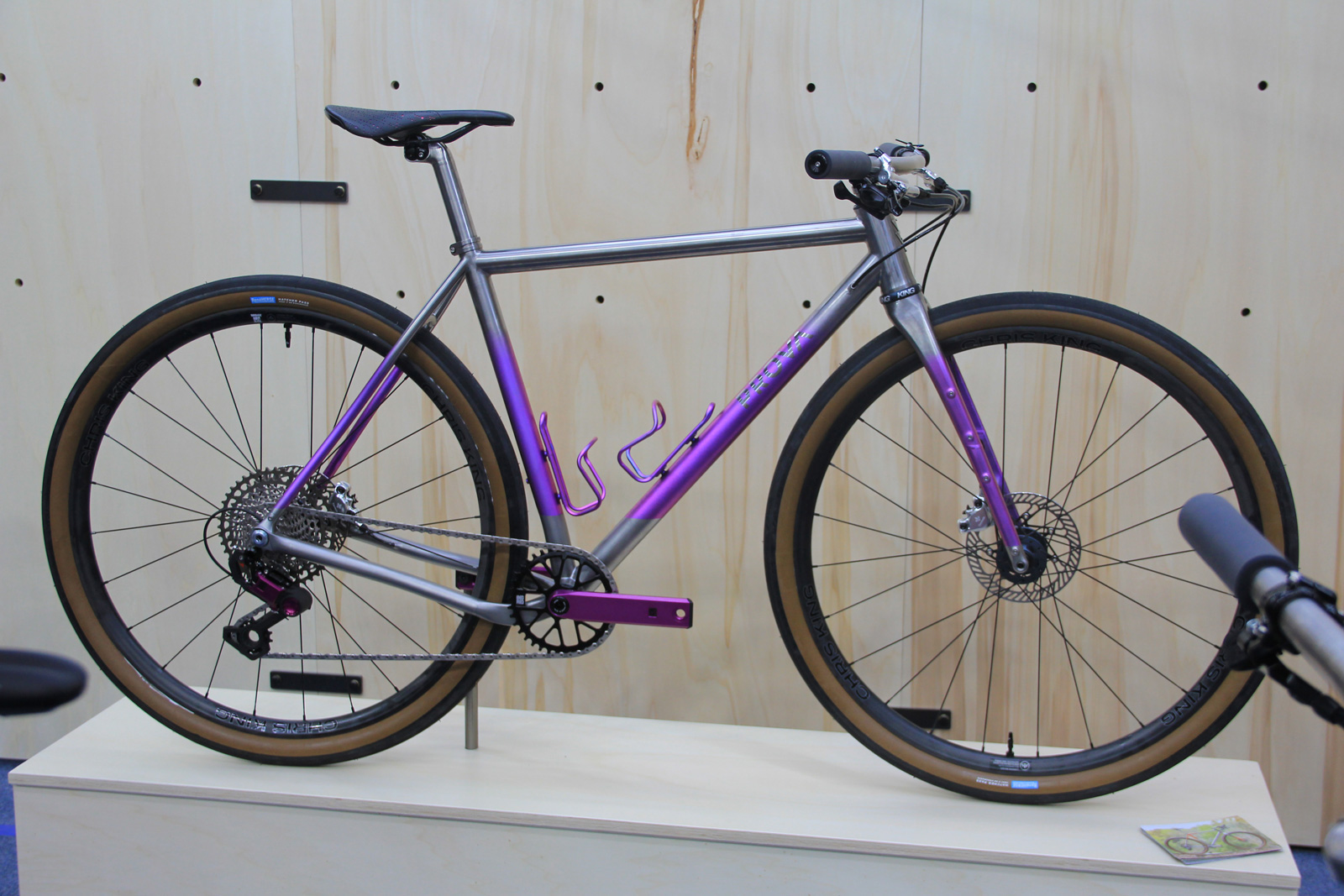 Prova Cycles owners, Mark and Kelly Hester, flew all the way from Melbourne, Australia, to show their finest custom-made titanium off-road and titanium-carbon road bikes at Bespoked 2022. We have previously covered the Prova Titanium Ripido Party Hardtail in our Round Up of the Best Hardtails of Bespoked, but this stunning Prova Mostro gravel bike also caught our eye.

The Mostro is Kelly Hester’s very own bike, built up with custom bull-nose titanium bars, an Ingrid crankset, with hubs and headset in the new Chris King Midnight Blue colorway. Prova say the Mostro is designed for escaping the city, combining progressive geometry – a longer front-center with a shorter stem – with clearance for 700c x 50c or 650b x 2.1″ tires. It features a dropped drive-side chainstay with a 3D printed yoke allow for the use of a conventional road double crankset. 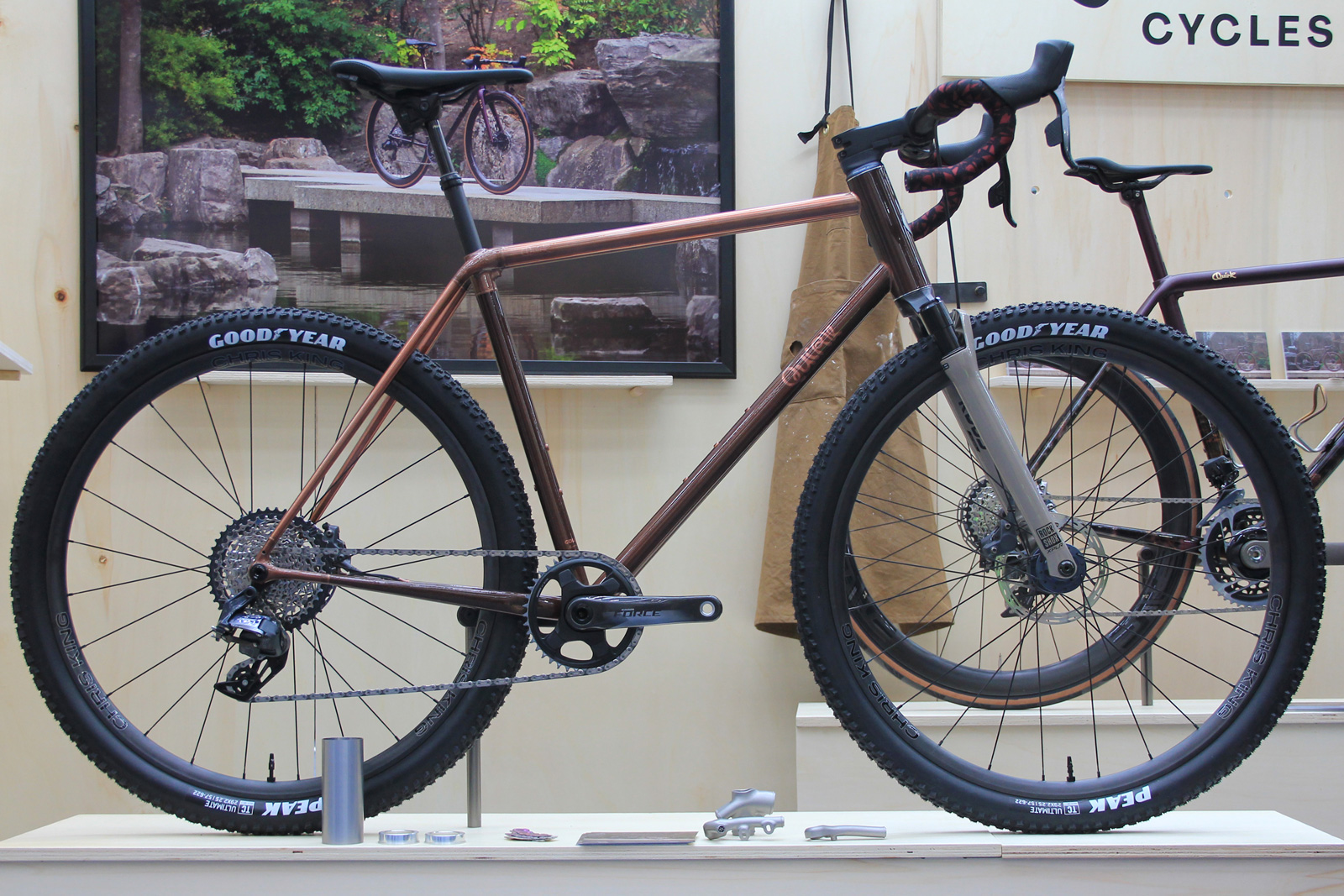 While the Prova duo flew to the other side of the world to reach Bespoked, the folk from Quirk Cycles merely rolled out of bed. Quirk Cycles is a London-based frame manufacturer specializing in steel bikes designed primarily for the drop-bar contingent. The Quirk Suprachub shown at Bespoked is their latest, most gnar-friendly creation.

As it’s been built with drop-bars, we can’t quite call it a mountain bike, but with a 30/40mm travel suspension fork, clearance for 29″ x 2.3″ tires and a dropper seat post, it’s certainly not far off. Quirk Cycles call it “the antidote to dubious under-tyred gravel bikes”.

The Suprachub is fabricated from a steel tubeset with narrow stays joined to 3D-printed cluster and 3D-printed dropouts. It is available in sizes S-XL. Pricing starts at £3925 for the frame with a carbon fork. 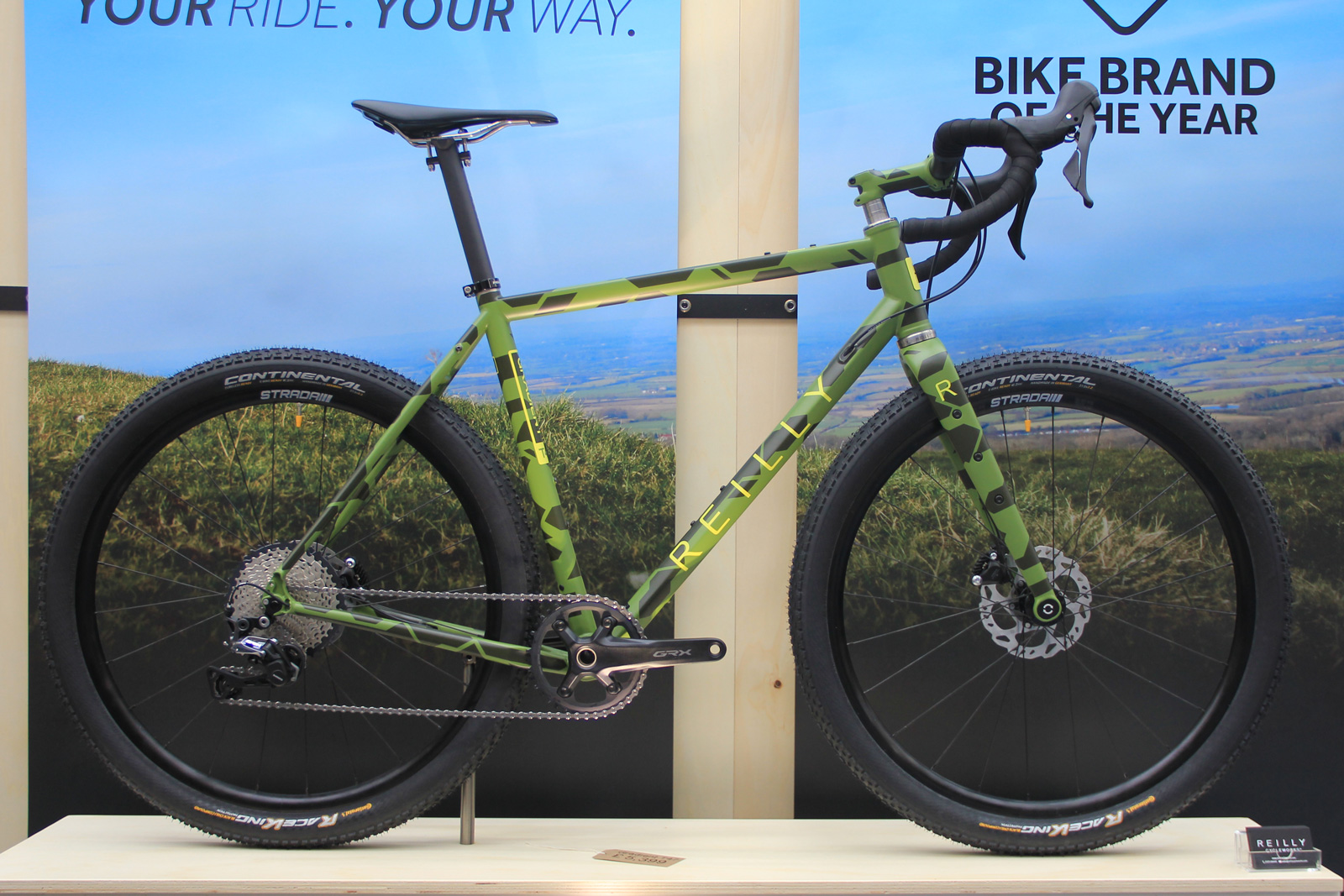 Brighton-based Reilly Cycle Works were showing their best-selling Gradient Gravel Bike, but the T47 edition. It is much the same as the original Gradient, but incorporates a T47 bottom bracket shell so that it can accomodate internally-routed cables, modernizing the frameset. There is also internal routing through the fork for use with a Dynamo hub. The Gradient T47 on show at Bespoked was painted by Mercedes Formula One. Such a paint job is also available to any customer buying a Reilly frame. 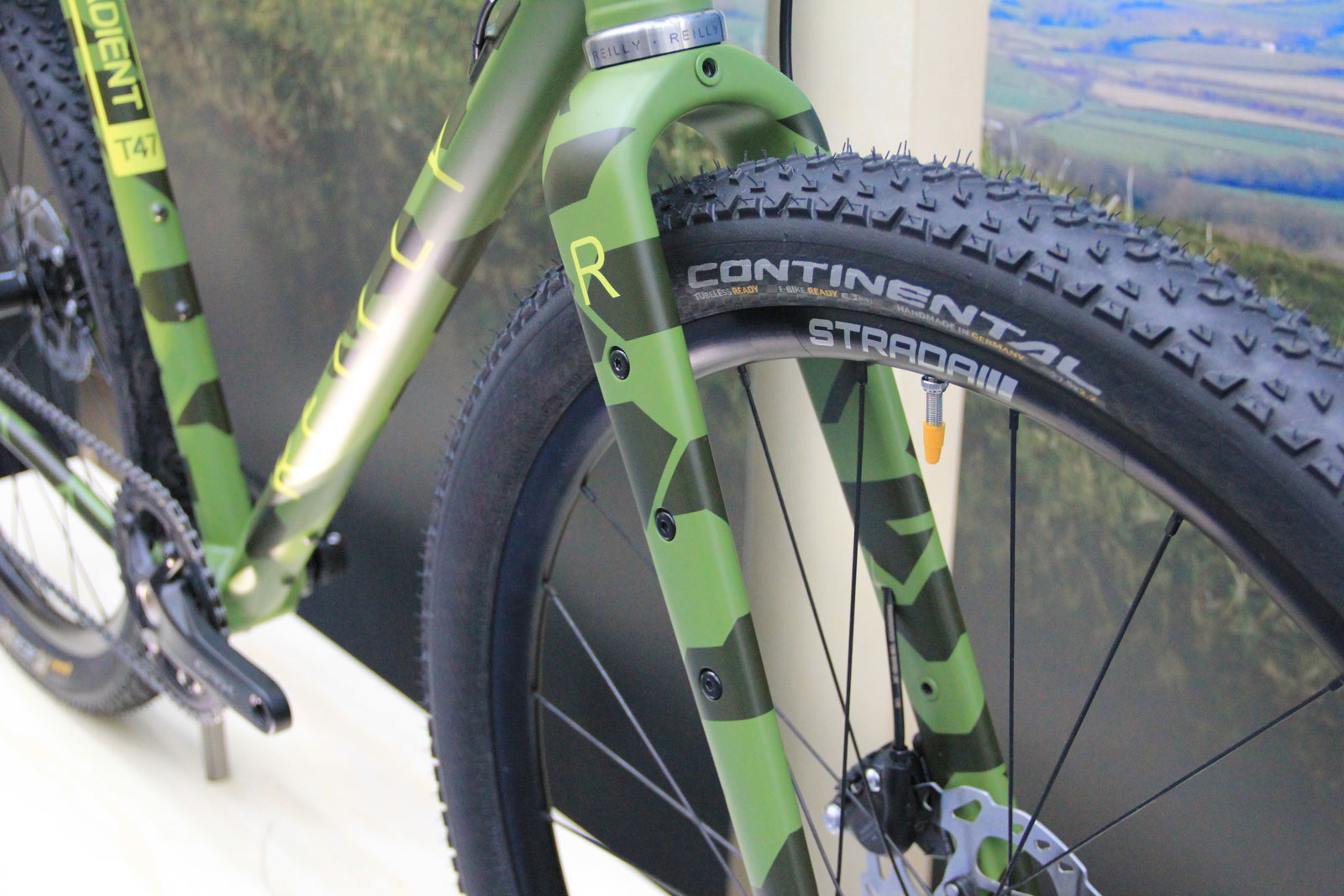 The complete build shown here with the Reilly Carbon Adventure Fork and carbon bars retails at £5,399, with the paint job is another £1,250 on top of that. The starting price for this model with the  alloy wheels shown here and the GRX 600 group is £4,149. 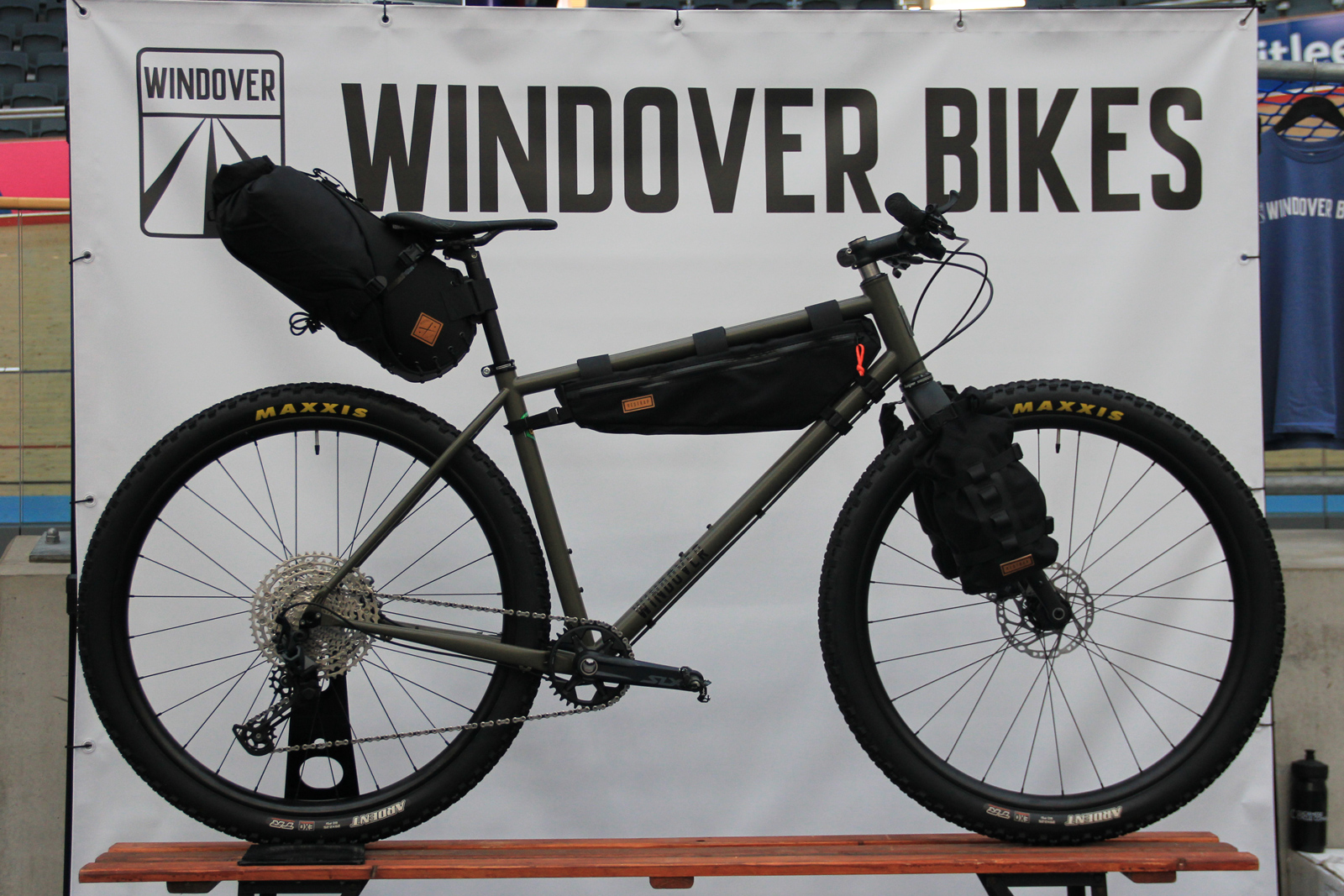 While Windover Bikes may seem like a relative newcomer, it is in fact made up of three former employees of Enigma Bikes. Proprietors Sam Watson, Richard Lambert and Chris Davis founded Windover Bikes in 2019 whilst enjoying a post-ride refreshment in the shadow of Windover Hill in the South Downs National Park. The trio ere at Bespoked showcasing the new Windover Beacon and Windover Bostal Adventure Bikes.

The Beacon is Windover’s MTB-inspired Gravel Bike made “for riding on tougher off-road surfaces, where gravel gives way to fist-sized flints and the gradient pushes the limits of a standard gravel bike”. The frame is fabricated from a Reynolds 853 DZB steel tubeset with boost thru-axle spacing and offers clearance for up to 29″ x 2.4″ tires. It has a T47 bottom bracket and internal routing for a dropper seat post.

The Beacon can be set up as a bikepacking rig with three mounting points for water bottles within the front triangle, with mounts for mud guards and racks on the rear. The fork has cable routing for a Dynamo hub and bosses for the mounting of Anything Cages. The frame alone will set you back £1,449. Frame and fork costs £1,799, while the frameset including Hope headset, seat clamp and Rideworks BB is priced at £1,999. 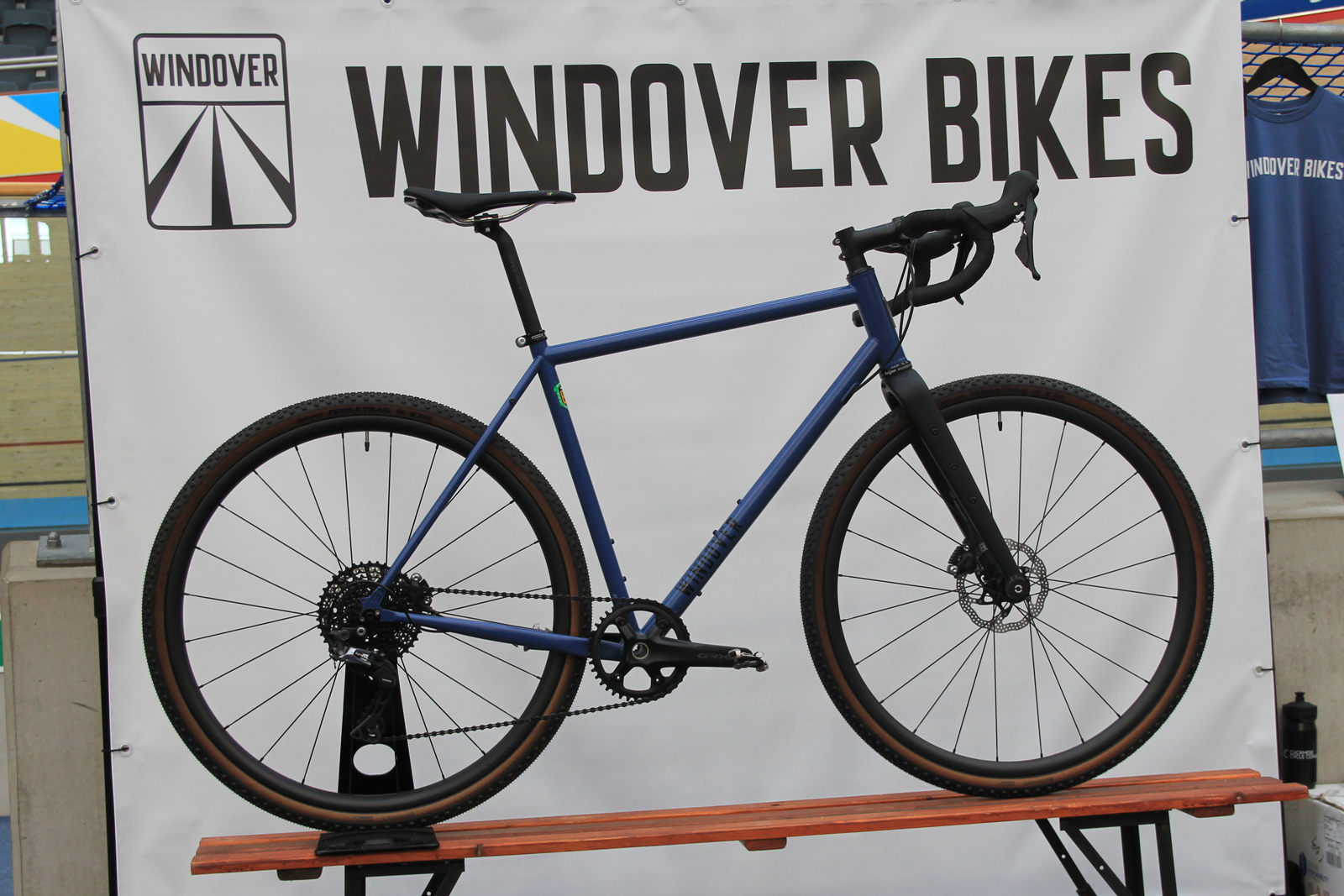 The Windover Bostal sits more on the All-Road bike end of the Gravel spectrum, designed for the daily commute, comfort road riding and gravel tours. It shares much of the frame features as the Beacon; T47 bottom bracket, multiple pairs of bottle bosses and mounts for fenders and racks, and it made from a very similar steel tubeset. Tire clearance is limited however to 700c x 50c. 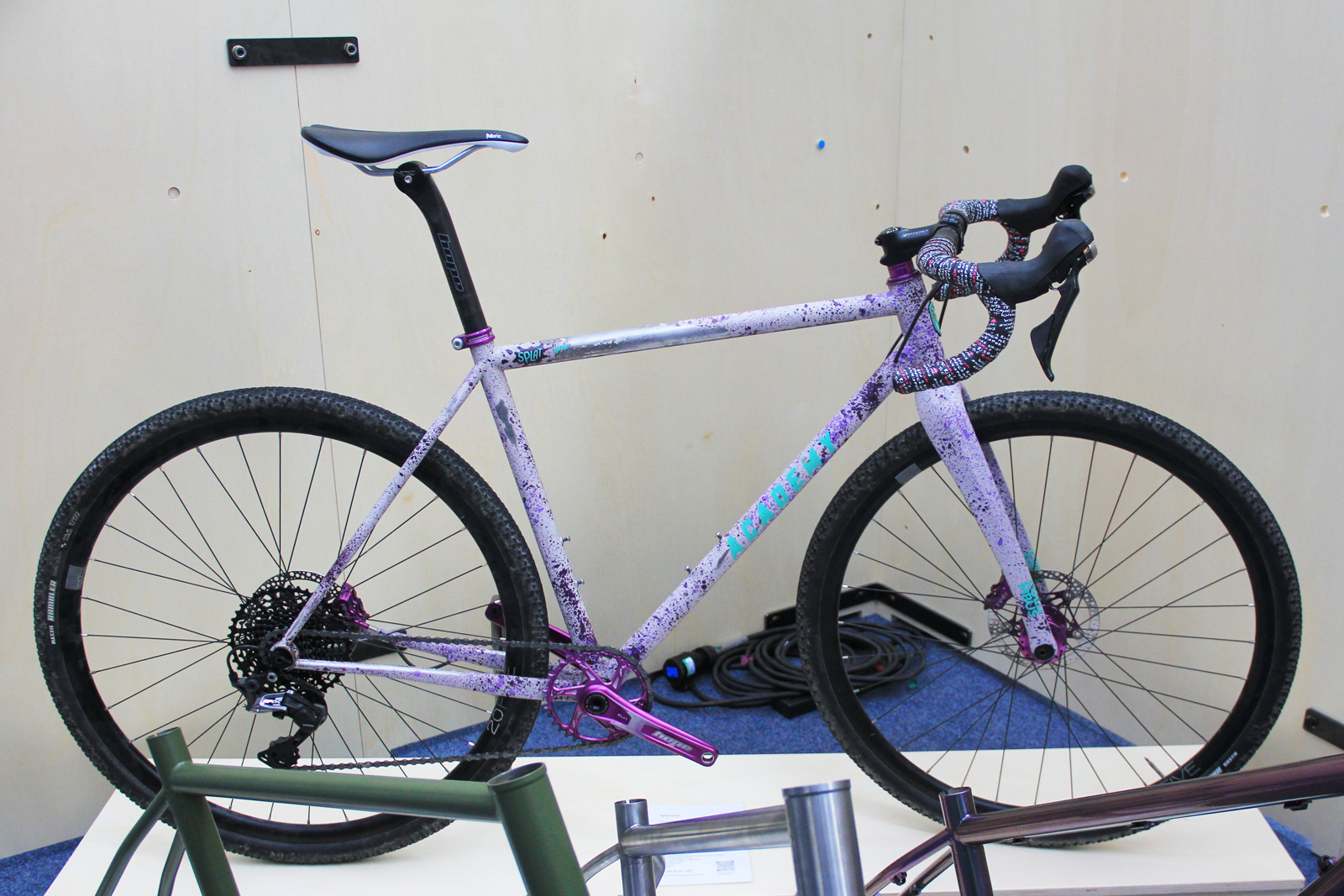 The Bicycle Academy is famous for its frame building courses, having educated more than a handful of the frame builders exhibiting at Bespoked 2022, including Billy Dye of Howler Frame Works and Sarah Salitter of Salitter Cycles. They also design and hand-craft their own bicycles, too, and they had a few choice options on display. The one that caught our attention was the Splat Grav, a “Gravel Bike with zippy geometry and great tire clearance”.

This one has a reach of 411 and a stack height of 570mm. The seat angle sits at 73° and the head angle at 72°. It has a 631mm front-center length, an effective chainstay length of 414mm and a BB drop of 70mm. The Splat Grav is fabricated from a Columbus Zona and Spirit tubeset with Paragon Machine Works dropouts. It is completed with a Columbus Futura Cross Fork, Hope and Shimano GRX drivetrain components, Hope brakes and a Ritchey finishing kit. This one is retailing at £2,950.

The Bicycle Academy’s frame building courses start at £1,500 for a 5-Day course. 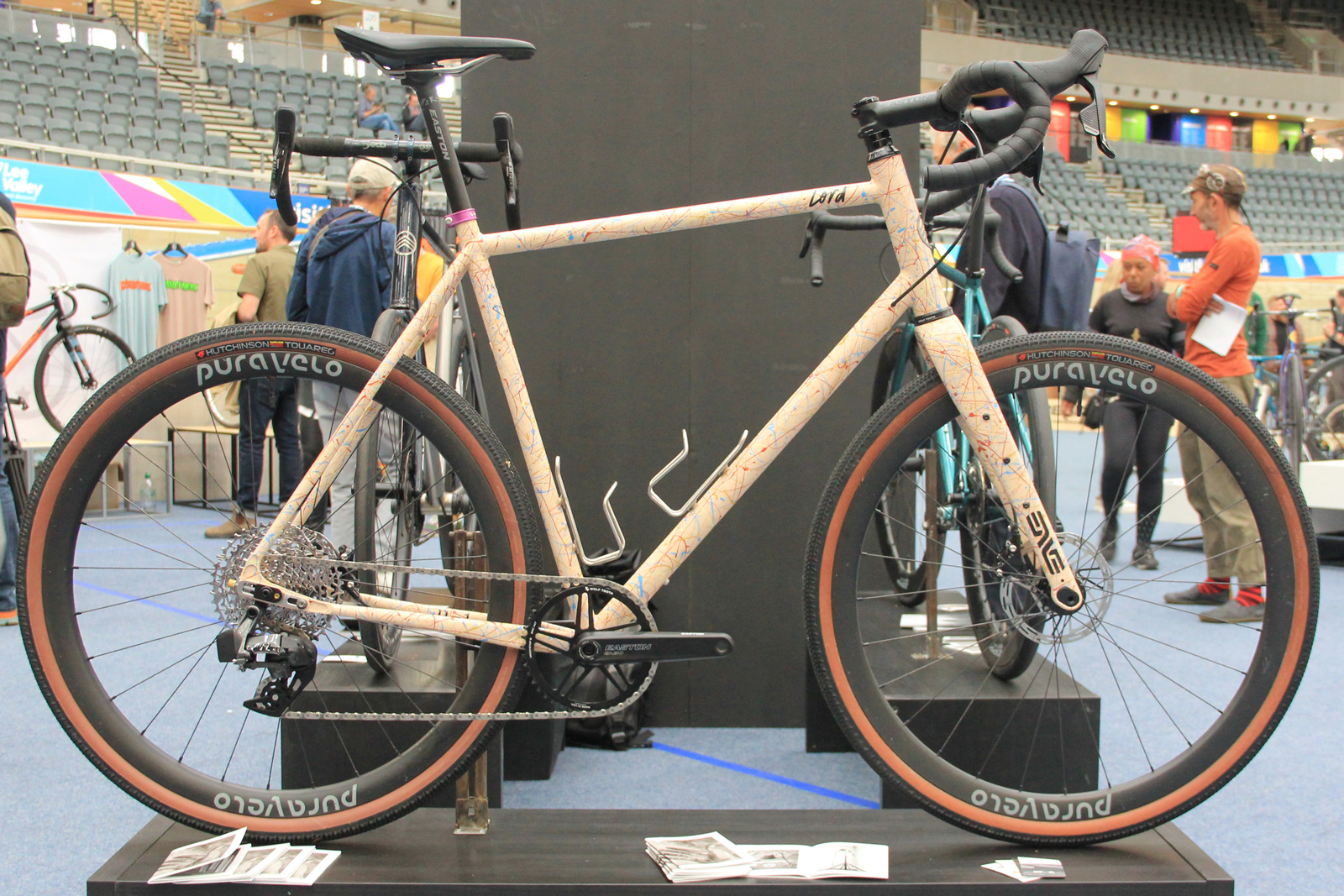 Custom frame builder, Lord Cycles, made the trip from Cardiff, Wales, to show their road and gravel bikes. It was the Lord Antur that stood out for us, thanks to its fantastic Jackson Pollock-inspired paint work by Jack Kingston. It is hand built using Columbus Zona and Life double-butted steel tubing with a 142mm x 12mm thru-axle rear end, T47 bottom bracket, 44mm headtube, 160mm flat-mount brake and clearance for 700c x 45c or 650b x 2.1” tires. The frame weighs a claimed 2 kg.

Lord Cycles frame prices start from £2,350. That gets you a bike fit, custom geometry, stainless steel dropouts and braze-ons a Columbus Futura Cross fork and a single-color paint job with the Lord Cycles logo. 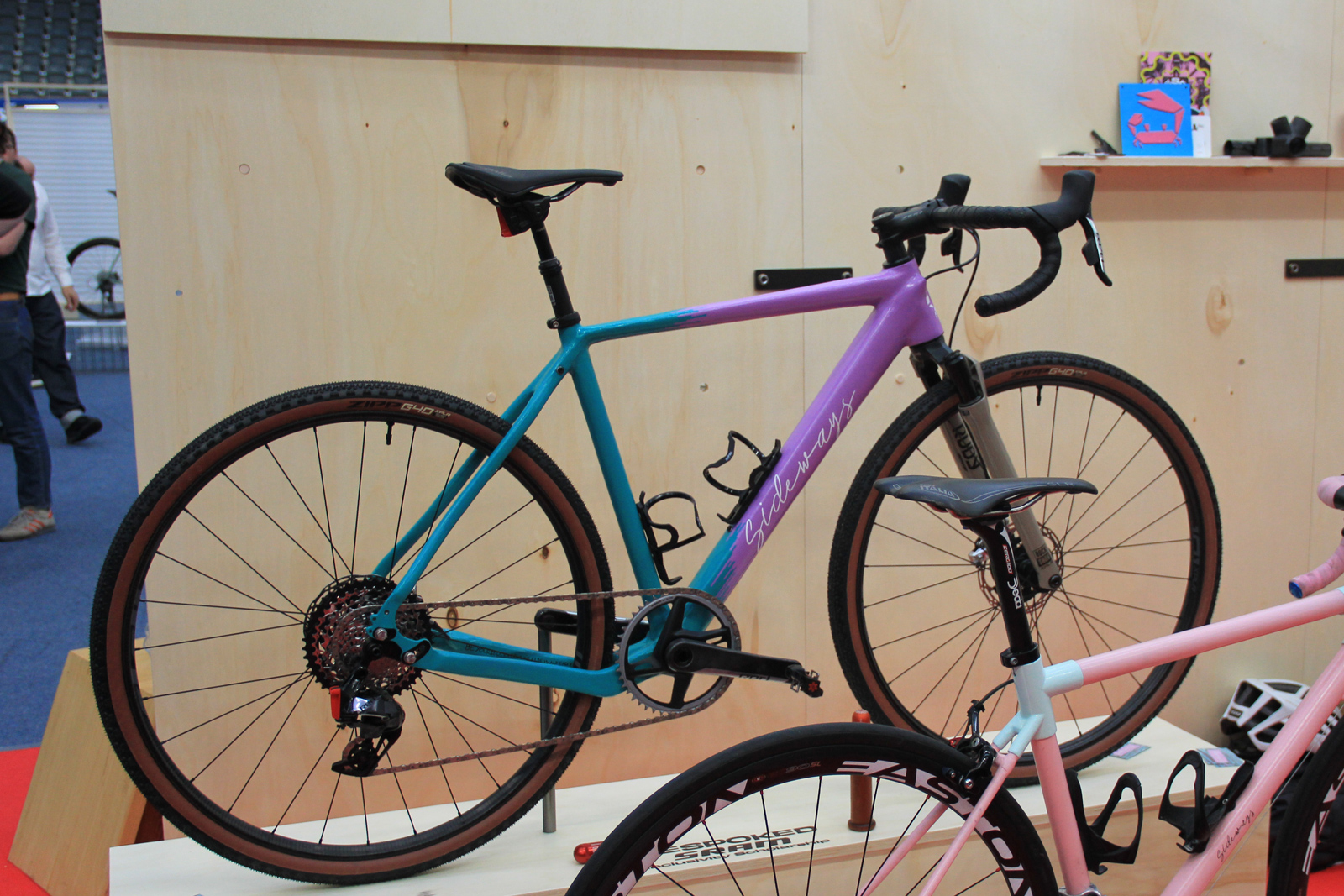 Viola of Sideways Bikes secured a place at Bespoked 2022 with a successful application to the SRAM-Bespoked Inclusivity Scholarship. That secures a booth at the show, and a whole bunch of parts from SRAM and Rockshox to allow a frame to be built up into a complete bike. Viola’s background is in engineering, having spent years working in various fields related to composites. No wonder then, that the Gravel frame she exhibited at Bespoked was a hand-laid carbon one.

The Sideways 002 was designed to have a race-like geometry similar to that of CX bikes. Its defining features are its dropped chainstays with an s-bend, designed to allow for decent tire and chainring clearance at the same time. The frame can take 700c x 45c tires with clearance for mud.

Viola opted for Paragon Machine Works Rocker dropouts on the 002 Gravel frame to allow her use of the QR wheels, but also the ability to switch them out for thru-axle wheels if needed later on. You can read more about the build process for the Sideways 002 on the Sideways Bike website.

For those interested, we have also covered the following stories from the Bespoked Show: